IN THE STILL, crisp night air, the sound of distant thunder starts to penetrate as the car approaches. The anticipation that envelops the gathered media has nothing to do with the vehicle's unusual, squashed-bug appearance – it was shown virtually as is at the Frankfurt Motor Show in September 2001 – but everything to do with driving it. The question refuses to budge from my mind: What should I expect from 16 cylinders, eight litres, four turbochargers, 736kW and 1250Nm?

Wheels’ first drive of the Bugatti Veyron, the precursor to the Bugatti Chiron, was first published in December 2005

The beast circles our venue, the medieval Relais Santa Anastasia winery just outside Castelbuono in the Madonie area of Sicily, its driver briefly selecting neutral and giving the throttle two big pumps that result in a hair-prickling "braaap, braaap"  – richer and bassier than any car engine I've ever heard before. The Veyron's low-set headlamps dazzle as it enters the courtyard drive, accompanied by a ground-shaking rumble and followed by an explosion of floodlights as the two-tone-blue supercar slows and halts in front of its eager audience.

Bugatti Veyron First Drive - December 2005
View this article in its original format in the archive.

Like seeing your favourite TV celeb in the flesh for the first time, the Veyron is smaller than expected. Its length – 4462mm – is about the same as a Mazda RX-8's, and while the stocky Bugatti is a lane-filling two metres wide, its 1204mm height means even an MX-5 driver would look down on it. Under lights, its gorgeously finished details glisten, among them its enormous polished wheels (19.7-inch front, 21.3-inch rear – they're metric) and two oversized aluminium air ducts mounted on top of its exposed, mid-rear-mounted monolith of an engine.

But it's the Veyron's no-expense-spared cabin that immediately beckons. As I pull open the all-aluminium door, the frameless glass drops a few centimetres, and I lower myself easily into its surprisingly slim-backed, race-style seats, then inhale. Immediately, there's a sense of something familiar. It's certainly not the Veyron's exquisite, turned-aluminium centre console or the seductively cold, expensively weighty feel of its aluminium switchgear. It's the smell. For all the Bugatti's bespoke, hand-built exclusivity, for all its swathes of soft leather and exuberant touches of real suede, its aroma is Volkswagen Pour Homme. Not the addictive petrol/oil mix of my own 1966 air-cooled Beetle, but the richness of a top-line, leather-laden Touareg. If such a comparison can be deemed criticism, it shouldn't be, because sitting in the one-million-Euro ($1.6m) Bugatti is an extremely rare privilege. Driving it tomorrow will be even more so ... 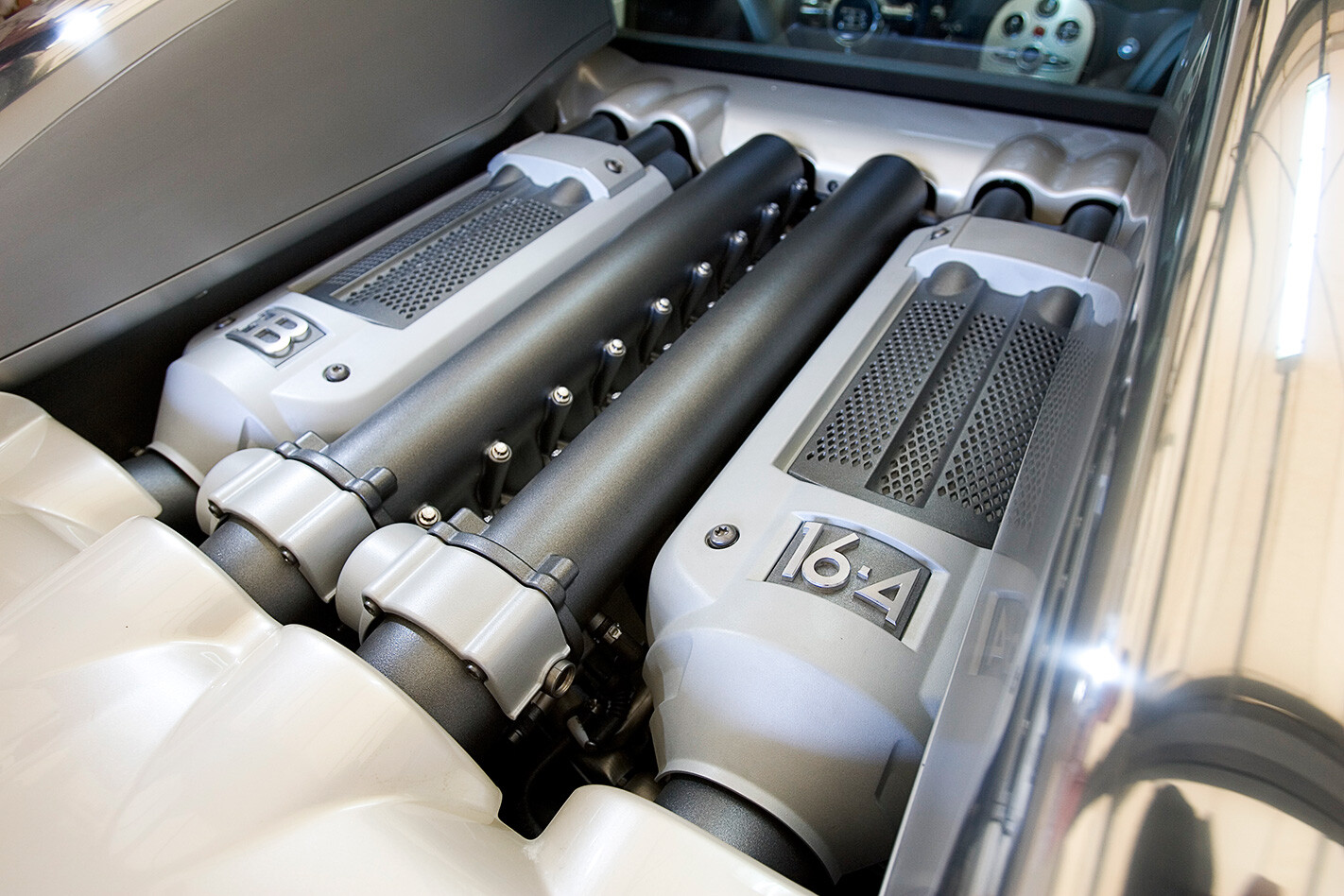 BUGATTI'S Veyron 16.4 was designed to achieve two almost implausible targets set very early in its development by ex-Volkswagen chief (and father of the legendary Porsche 917 and Audi Quattro) Ferdinand Piech: 1000 horsepower and 400km/h. Until now, the Veyron has grabbed more headlines for its troubled development than for its potential position as a landmark achievement in the history of the automobile. But now that I'm just minutes away from driving it, it's the Veyron's immediate journey ahead that matters.

It's difficult not to be wary of bending or scratching or – dare I even contemplate it – writing off the world's fastest, most expensive car ever.

But the pressure was applied even before I left Australia: "Mate, if you stick it in somewhere, you'll be on the front page of every newspaper in the world," chorused friends and colleagues. Right now, being filmed naked in the showers on Big Brother Uncut seems a more respectable path to achieving celebrity.

My chaperone for the drive is Oliver Schauerte, a Wolfsburg-based Bugatti engineer in his mid-30s whose sizeable German frame is easily accommodated by the Veyron's spacious two-person cabin. There's little room to store luggage - merely a small, Vuitton-esque compartment beneath the Bugatti's carbonfibre bonnet, a pair of Audi-style flip-out door bins and a carpeted compartment behind a leather-trimmed door between the seat backrests. 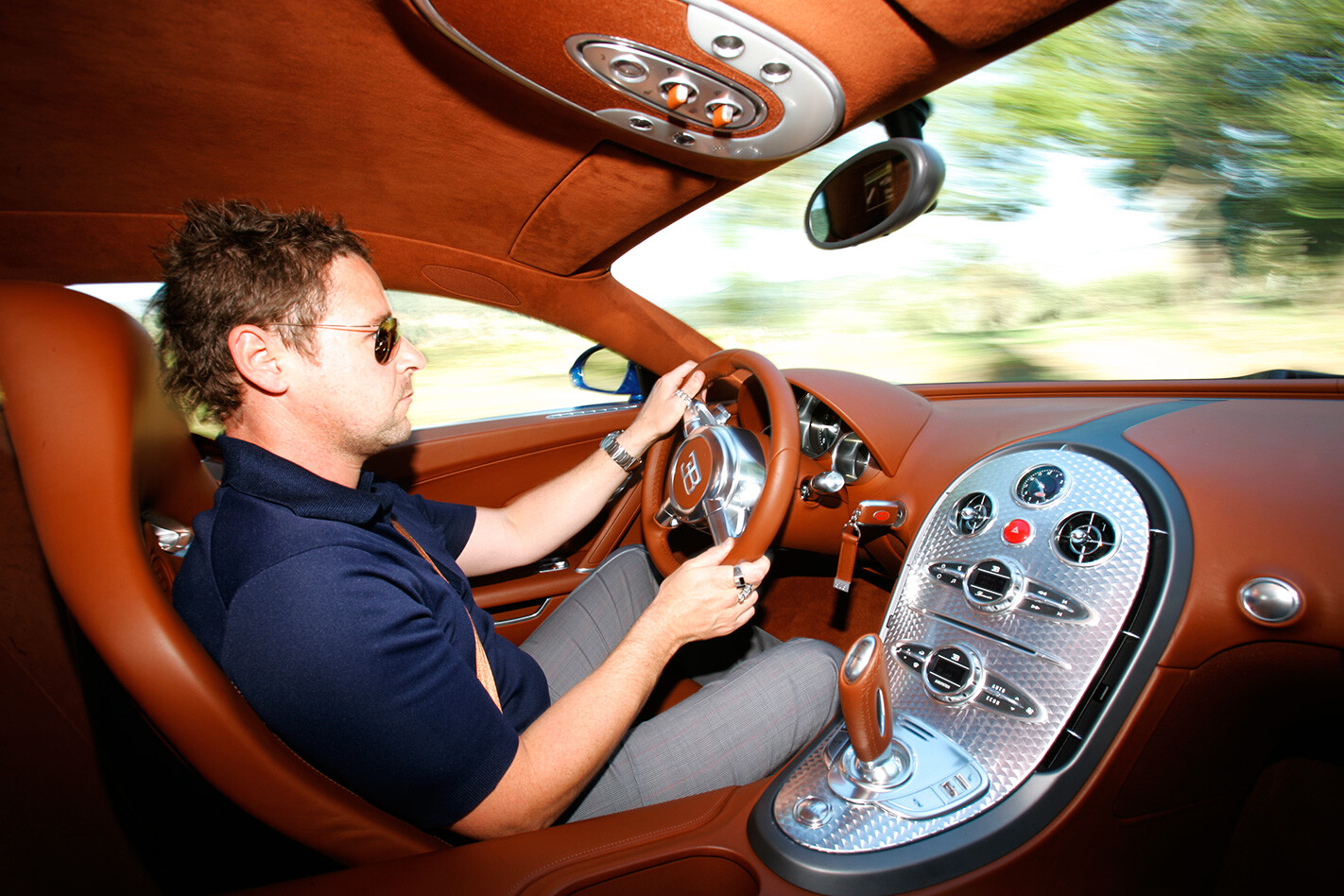 I nervously attempt to locate the driver's seat buttons, only to discover it's manually adjustable – the backrest via a chunky, beautiful-to-touch aluminium lever; the seat base via a longitudinal bar with a rubberised, knurled grip.

Not surprisingly, the ignition key feels like aluminium, and, equally expected, the Veyron kicks into life via a large 'start' button below the trigger-like gearstick. The W16's starter motor whirrs mechanically before an all-encompassing, stereophonic rumble reverberates off the brick wall behind the car, providing the merest hint of its capabilities.

To date, the fastest and most powerful car I've driven is Lamborghini's 426kW/620Nm Murcielago- capable of 0-100km/h in a claimed 3.6 seconds and 330km/h flat-out. Stupendously fast, yet the 736kW/1250Nm Bugatti performs 0-100km/h in a stunning, F1-rivalling 2.5 seconds and tops out at an electronically limited 407km/h. If not restricted by its custom-designed Michelin PAX run-flat tyres, the Veyron would max-out somewhere around 430-440km/h. And I'm about to road test it. In Sicily. On public roads I've never driven before. With jet lag ... 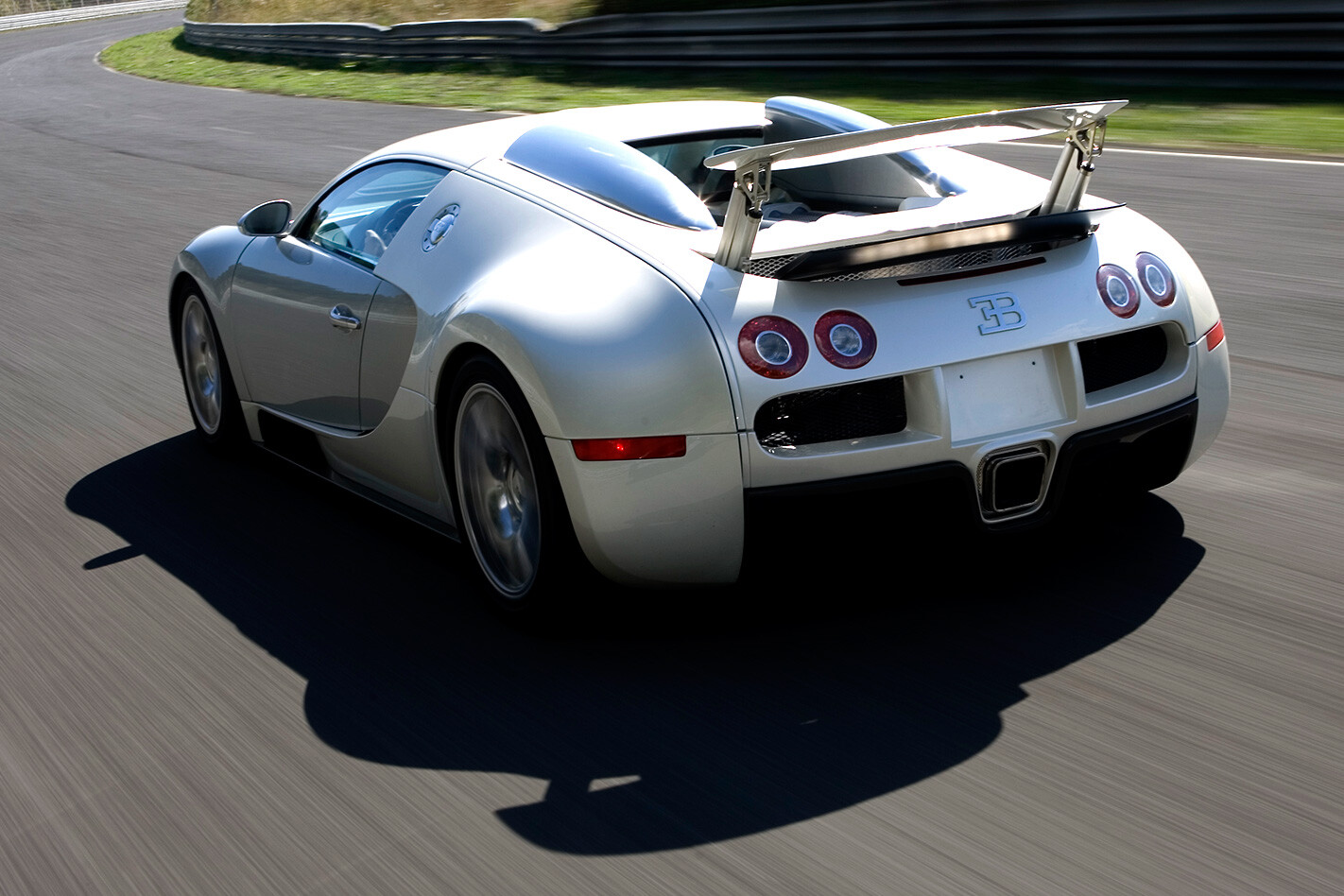 BEYOND the Veyron's sensual leather-and-aluminium steering wheel (with Ettore Bugatti's insignia dominating its circular centre boss), the first thing you notice is the appalling turning circle. But its steering is fast-geared and does a far better job of disguising the Veyron's unwieldliness in tight environs than, say, the lumbering manoeuvrability of an Alfa GTA. And then there's its torque – 1250Nm, flat from 2200 to 5500rpm. With its seven-speed DSG in Drive, you need only a whiff of accelerator to make the Veyron move smartly, yet its throttle actuation is progressive enough to prevent it from feeling overly sensitive.

Pulling onto the two-lane autostrada near Cefalu, heading towards the legendary twisties of the Targo Florio's grand circuit, I tentatively set the pace between 180 and 200km/h – in a 110 zone, with moderate traffic.

Fortunately, we can watch the speedo here for performance, not caution, as the Carabinieri – Italy's police – have been notified about the half-dozen Veyrons that will be out driving enthusiastically during the six-day launch. Word is the Sicilians are happy just to have a Bugatti back on their island, and that the Carabinieri will turn a blind eye to speeding misdemeanours. Here's hoping.

At 210km/h, steering through curving two-lane mountain tunnels, I ask Oliver if I'm driving too slow. "Others have driven quicker," he says diplomatically, so I nudge up to 240 on the straights and try to stay focused. What strikes me, though, is how effortlessly easy it is to steer the Veyron at these speeds, so moderate relative to its astonishing potential. Above 220, the Veyron drops its ride height from Standard (125mm all round) to Handling (80mm front, 95mm rear), yet in either automatically selected mode the all-wheel-drive Veyron's exquisite poise is quite marvellous. Its balance rests delicately, yet reassuringly, on its outside rear tyre and its sublime steering inspires enormous confidence – intimately connecting with its driver like a 911, yet wonderfully progressive and creamily weighted either side of centre.

Everyone expected the Veyron to be ballistic, but few could have predicted that its steering, handling and ride would be so polished, and so beautifully realised. Despite some expansion-joint slap on the autostrada - amplified by the carbonfibre structure's innate noise-conducting qualities- the Veyron is actually very refined, and its ride quality, while undeniably firm, is quite comfortable.

After 20 minutes behind the wheel, I finally have the courage to test maximum thrust. I flatten the Veyron's metal accelerator pedal and hang on, briefly noticing the tacho needle rushing to around 5000rpm in my peripheral vision before four turbos ignite and all hell breaks loose. There's no time to register the 6600rpm-redlined centre tacho (cutout is six-eight), let alone the smaller 450km/h speedo to the right, or the slightly unnerving 1000hp power dial to the left. 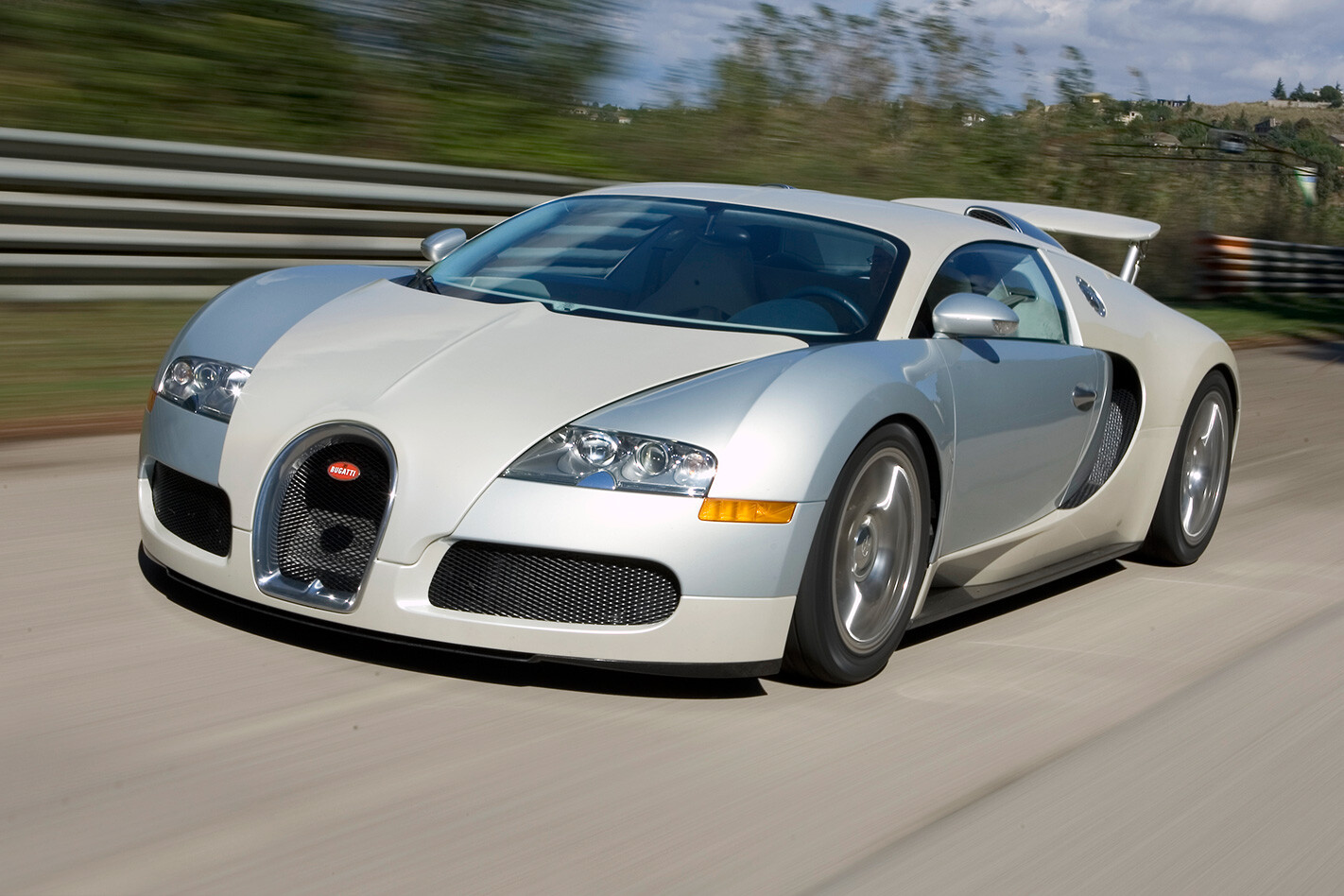 Instead, I'm gob-smacked – stunned by the force that slams my head back into the seat, and simultaneously thrilled and petrified by the Veyron's phenomenal, absolutely merciless acceleration. The Bugatti catapults forward, plunging headlong towards the horizon with an intensity that suggests Bugatti isn't lying about the Veyron's claimed performance: 200km/h from standstill in just 7.3 seconds – 2.5sec quicker than the previously-fastest-production-car-on-Earth McLaren F1 – and 300km/h in 16.7sec- half the time taken by Porsche's flagship, the Carrera GT. And then there's the sound – like a great wall of thunder, rising and falling rapidly as the Veyron's flawless seven-cog DSC shifts with perfection from gear to gear. It's akin to the bellow of an offshore powerboat, matched to the force of being launched into space. I imagine.

Time to try some corners – old Targa Florio road sections littered with pottering Fiats and even the odd lump of cow. Here, the 1888kg Veyron astounds with its agility, feeling almost chuckable and remarkably light on its feet. This mode extends the Veyron's unbelievable engine to its rev limit, while adding wicked, bellowing throttle blips when downshifting. Approaching Castelbuono and the inevitable end of my Veyron experience, a few irresistible overtaking opportunities loom. The first is a pair of tourist-filled coaches. Too easy. The next is a line of three cars and a motorcyclist. Once again the Bugatti's tacho spikes momentarily before 1.9 tonnes of sublime supercar demolishes distance at record pace. Finally, I'm stuck behind the Carabinieri – driving an old Fiat Panda. I turn to Oliver for advice: "Will he mind if I overtake him?"

The Panda indicates and turns off. Ahead lies my final moment driving the most ambitious, mind-altering car ever. I can't resist tromping the Veyron's throttle one more time, and feeling the air virtually squeezed out of me. And yet again I'm left speechless; not because I've run out of things to say, but because the Bugatti Veyron 16.4 is such a marvellous automotive achievement; one that may never be bettered. Ever.

I arrived in Sicily questioning the $1.6 million Bugatti's relevance; I leave merely celebrating its existence.