The hi-po battle among the German brands is raging hotter and on more fronts than ever before. BMW's most affordable M car ever opens both barrels on Audi's TT RS and Porsche's Cayman

The hi-po battle among the German brands is raging hotter and on more fronts than ever before. BMW's most affordable M car ever opens both barrels on Audi's TT RS and Porsche's Cayman.

First published in the October 2011 issue of Wheels magazine, Australia’s most experienced and most trusted car magazine since 1953.

I've been salivating over this moment, yet part of me has also been secretly dreading it. First local drive of the BMW 1 Series M Coupe, a forced-induction game-changer from Munich's masters of natural aspiration. Will the 1M's turbocharged drivetrain enhance M's reputation for peerless front-engine performance cars, or tarnish it by putting a veil between the driver and the action? Will the 1 Series M Coupe's keen $99,990 tag make its rivals look overpriced, or has BMW diluted the driving experience to meet this surprisingly low entry fee? 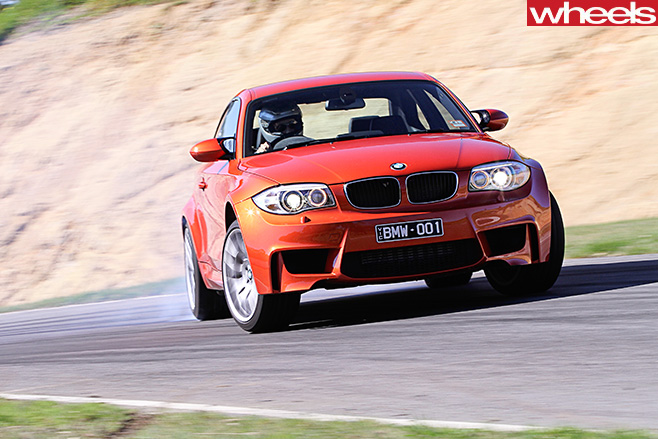 In essence, I want to know if the BMW 1 Series M Coupe is a true M car. I'm sure you do too. The specifications are tantalising. Twin-turbocharged straight six good for 250kW and 450Nm, plus 50Nm on overboost. BMW claims the 1M accelerates from rest to 100kmlh in 4.9 seconds, within a few tenths of its more expensive, V8-powered M-car brethren. Suspension pinched from the M3 and a wider dynamic footprint should elevate the 1M's handling well beyond the capable 135i on which it's based. A faster steering rack, wider tyres, bigger brakes ... no question the 1M is the fastest, most capable, most exciting 1 Series ever. But like all M cars, it should also flatter and reward the driver with every ounce of its ability.

Dynamic, powerful, immersive. That's what M means, and what the 1M must live up to. I hope BMW has delivered. To find out, I've got the first 1M in Australia for two days, and bookings at a dragstrip and a track, with 300km of my favourite backroads in between. Oh, and a couple of rivals: Audi TT RS and Porsche Cayman. One is the pinnacle of straight-line acceleration under $150,000. The other, the sharpest driver's tool within cooee of the 1M's price. 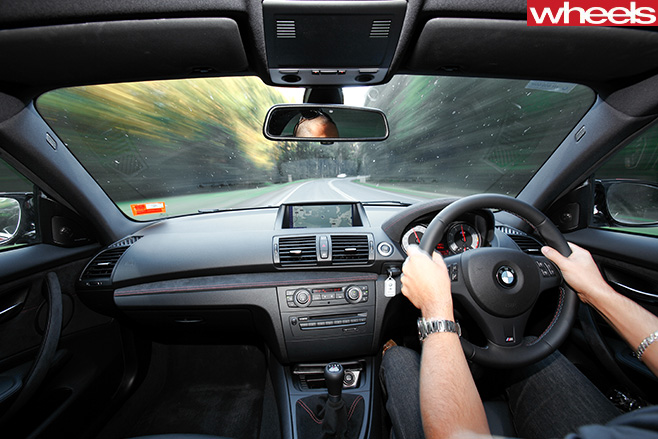 Thumbing the 1M's twin-turbo six into life the first time, there's no initial rasping yowl that settles into a manic thrum like the E46 M3's straight six, or syncopated double-five burble of the outgoing MS's fabulous V10. It sounds, well, unexceptional if a little heavy on the bass. I wasn't expecting fireworks or guitar solos, but this docile burble gives no clue to the hairy-chested missile lurking within. Joining early morning Melbourne traffic brings the second revelation: This M car is happy to lope along with the traffic. It's tractable and resource-rich at low revs, and doesn't require a lower gear to feel snappy. Okay, I expected this from an engine making 450Nm from 1500rpm right through to 4500rpm. But still, an M car that's this torquey and responsive around town is definitely something new.

The 1M's exterior also takes the M Division into new, more visually aggressive territory. Compared to the 135i coupe, the 1M's wheel arches are pumped and packed with 19-inch BMW M3 competition rims. There's a deep triplescoop apron at the front, a decklid spoiler, diffuser and signature quad tailpipes at the rear. It all combines to deliver a look that's tough, tensed and chiselled, like a welterweight boxer strutting towards the ring. Looking at the 1M in the dragstrip staging area makes my heart race at the thought of actually hammering it. It also triggers a small dose of first-date nerves. I can't wait to discover if it's a brilliant driving machine, or a bitter disappointment. But not just yet. Now that I'm so close, I want to draw out the anticipation a little more. Let's start with the Audi. 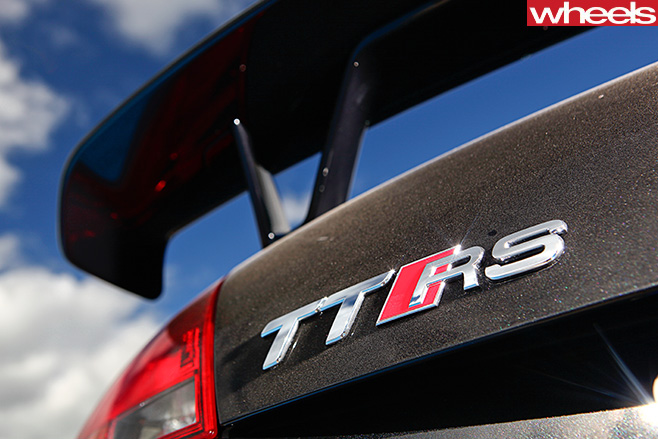 The TT RS's turbo five-cylinder engine rumbles and growls. Give the throttle a prod and the revs barely keep up with the rising bellow. This TT has been to UFC school and is bristling with pent-up aggression. Getting it out to the dragstrip feels like walking a pack of angry Rottweilers on a too-short leash. The RS's rapid-fire bark as it strains against the brakes, throttle floored to invoke launch mode, is like electrodes zapping the pleasure cortex. Nobody calls this TT a hairdresser's car. Unleashing the RS, I discover, is even better; the force of the launch body-slamming you into the seat. Outside, it's like watching a Scooby Doo cartoon as, for the first few moments, all four of the RS's 19-inch wheels spin madly but the body remains strangely stationary. Then, the RS grips and is gone. Zero-to-60km/h in two seconds; 100km/h in 4.3sec. Ferocious, rampaging, and dead easy. Launching the all-wheel-drive Audi requires nothing more than taking your left foot off the brake after pinning your right lump to the firewall. Your grandmother could do it. If she could cope with the relentless accelerative assault, that is. 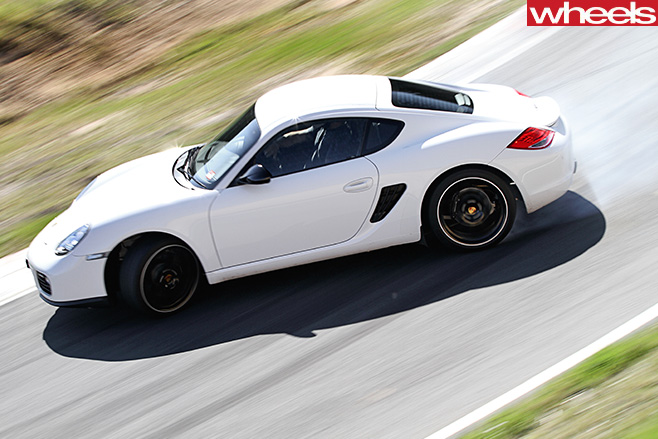 In contrast, the Porsche Cayman makes you work for relatively meagre reward. It launches best with the merest hint of slip, its rearward weight bias helping traction. The Cayman is 150kg lighter than the Audi, but also 55kW and 150Nm down, and its best of 5.8sec is a full l.5sec off the pace. To be fair, the Cayman capable of challenging the 1M and RS in a straight line is the $147,500 Cayman S and its 3.4-litre flat six with 235kW/370Nm. But that price is even farther north of the 1M than the already expensive TT RS, and it still doesn't deliver a sub-S. Question: What value is a Porsche badge?

Okay, enough waiting. It's M time. Launching is such a departure from the usual M-car antics where the instruction manual must first reveal the secret sevenbutton launch sequence. The 1M is a refreshing return to simpler times. Negotiate a smooth trade of clutch for throttle just on the flat torque curve at 1800rpm, and the BMW hits 100km/h in 4.7sec. The sense of accomplishment at getting the launch just right, at managing grip levels well into second gear, at quickly swapping gears just shy of the 7000rpm cutout makes the 1M more rewarding than the admittedly quicker Audi. In the BMW the driver is integral, in the Audi the driver is barely a factor (a problem easily solved by choosing the same-price six-speed manual TT RS). 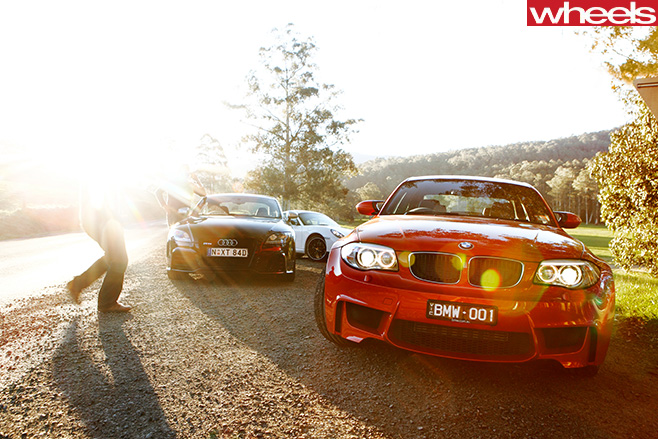 Sitting inside these two cars suggests otherwise. The Audi's cabin is a sporty reflection of its price and abilities. Flat-bottomed steering wheel with paddles, brushed alloy pedals, RS badge on the gear selector, TT etching in the door trim ... it all invests the cabin with a real sense of performance and prestige. The sports seats are low and deeply sculpted -manually adjusted to save weight - but the bolsters are wide and not adjustable so don't hold the driver as well as BMW's adjustable bolsters do. Also, the pedal-to-steering-wheel relationship is not quite right.

The BMW's interior has a few nice M touches, like Alcantara door trims, gearlever surround and dashboard highlights, and the chunky M-sport steering wheel. But that's pretty much it. The dashboard looks conventional 1 Series, even if it does have grey instrument dials and red stitching. Enough there to feel a little bit special, but by no means the same extroverted chest-beating as the exterior. The Cayman's interior is the most functionally cohesive, even though it is let down by a plasticky steering wheel. The seat is low and supportive, and all vital controls ideally placed. It's a great office from which to work. The Cayman may want for performance on the dragstrip, but it claws this deficit back noticeably on the road.