Is a good sports diesel a good sport, full stop? Golf and 3 Series oilers take on their petrol siblings to see which really provides the spark.

THE TERM ‘sports diesel’ is oxymoronic no longer. Back in the dark days, oiler power was reserved for load-lugging tractors which demanded torque. Then, some boffins came along and took the compression-ignition engine to finishing school. High-pressure ‘common’ rails that inject fuel directly into each cylinder increased efficiency; finely-tuned piezo injectors which vary fuel-spray loads reduced combustion noise; and particulate filters cut down exhaust soot. 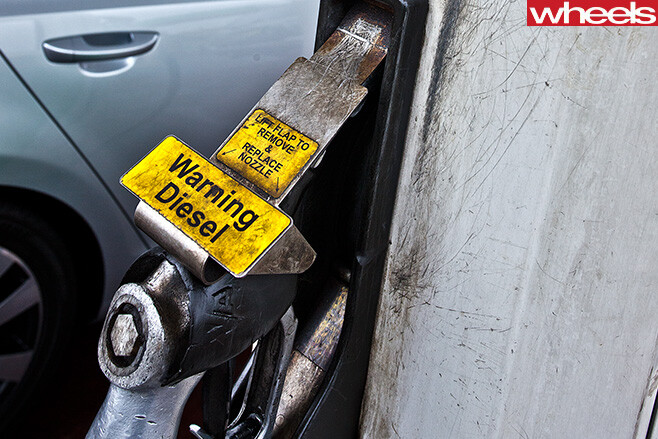 From 2005 to 2008, diesel passenger car sales in Oz quadrupled to 19,791. When green-tinged eco-diesels like the Mini e and Ford Fiesta Econetic began appearing, the oiler was no longer seen as dirtier than a Kings Cross strip club. And when Audi and Peugeot started winning LeMans with diesels, it was only a matter of time before oilers gained enthusiast appeal. Many have tried … and failed. The rattly acoustics of a Pug RCZ HDi ruled it out; likewise the narrow powerband of the now-superseded Renaultsport Megane 175 DCi. Audi’s A5 3.0 TDI boasts cracking performance, but an anchor-heavy front end.

Enter the BMW 330d and Volkswagen Golf GTD – the first sports oilers that right most diesel wrongs. But can they stare down two of the best petrol-fuelled sports cars in the business, their very own 335i and GTI siblings? We’ll assess the real-world  elements of price, economy, emissions, servicing costs and resale, then apply the blowtorch on the strip and in the twisties to see if diesel, finally, can fuel our fire… 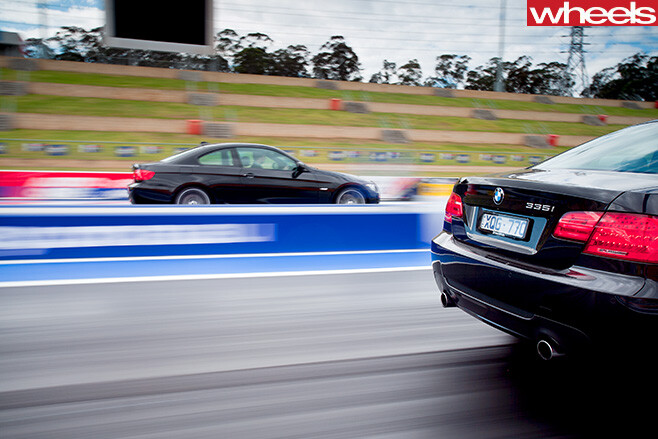 LINED UP on the dragstrip either side of the Christmas tree lights, the 3 Series Coupes appear identical. Black paint, lowered M Sport suspension, 19in alloys filling the guards. Only an A-grade trainspotter will pick them apart – the BMW 335i has split exhausts and five-spoke wheels, the 330d twins and 10-spokers. Both boast Euro V-compliant 3.0-litre all-alloy single-turbo sixes, tied to a seven-speed dual-clutch ’box for the petrol and six-speed ZF auto for the oiler. 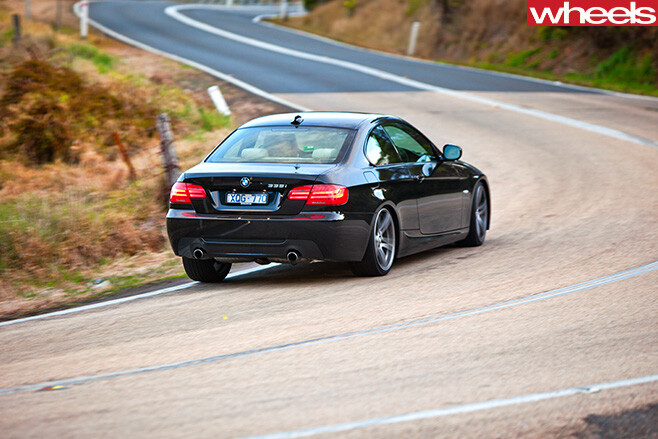 There’s no avoiding the elephant in the room, though ... aural appeal. With only a hint of clatter at idle, the BMW diesel is creamy on light throttle, rising to a distant growl when pressed. But the petrol six sounds better. Snarly and raunchy, it strums out an epic power chord that is addictive.

Still, there isn’t much in it, especially considering the $120,200 335i M Sport costs $21K more than a 330d M Sport. Both models have condition-based servicing, and BMW claims they’ll each require six services and will cost around $5800 over 100,000km. The 335i will retain more of its (higher) purchase price after three years – 59 percent versus 55 – but loses more ground in the economy stakes. It matters little which engine is up front when it comes to dynamics. Both boast crisp turn-in which transitions into sublime rear-drive balance. Fact is, the 335i is more manic and exciting, though the 330d never falls behind, and can pull away from the 335i on tight uphill switchbacks by virtue of its extra torque. Call it a dynamic dead heat.

All of which means the 330d matches the more expensive 335i for performance and handling, and hammers it for economy. Only your ears will miss the wail of the petrol six. Consider it a (qualified) win to the sports oiler. Rudolf Diesel would be stoked.

Oil’s well in a hot hatch? Not when a petrol all-star is on your tail. 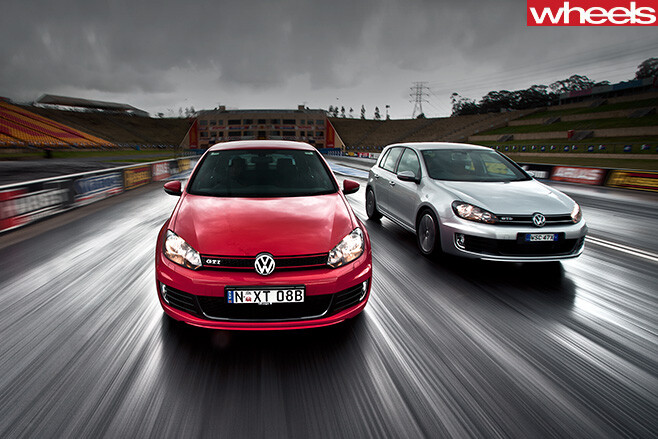 THINK OF the automotive equivalents of ’90s Brit-popsters Posh and Sporty Spice and you’ll understand the Volkswagen Golf GTI and GTD siblings. Both hail from the same band, with subtle differences in image and personality. The diesel GTD dresses in more formal attire, with a chrome grille and polished alloys; the petrol GTI wears a louder tracksuit with red lip-gloss and brake calipers, split-twin exhausts and 7mm-lower front suspension. In five-door six-cog manual form, Posh costs $39,290, Sporty $40,490.

Both are a litre and two pots down on the BMW coupes. GTD’s 2.0-litre turbo-diesel four gets all the latest gear like common-rail direct injection, with nozzles that spray varied fuel quantities depending on load. The VW diesel sounds like a woofy old-school, carby-fed four, but with a more refined edge, while the petrol is classic GTI – whipped-cream smooth, zingy, with a particularly tasty exhaust pop on overrun.

Slip each car’s Brylcreem-slick manual into sixth on the freeway and both are quiet. The GTI’s low-rpm torque means there’s no need to chase revs on hills, easing boost and therefore consumption. It returned an excellent 6.5L/100km, one-third more than the GTD’s 4.9L/100km, at an extra cost of $2.60 per 100km.

Regularly spin the GTI’s crank to 7000 revs, however, and consumption soars to 15.5L/100km. In parallel with the 3 Series, on the same ‘dynamic’ test route, the petrol GTI slurped 50 percent more fuel than the diesel GTD, meaning an extra $8 per 100km. Also like the BMWs, the diesel emitted less CO2 on test, but the GTD’s (near-equal to 330d) 131mg/km NOx output is far worse than GTI’s (five times higher than 335i) 49mg/km. 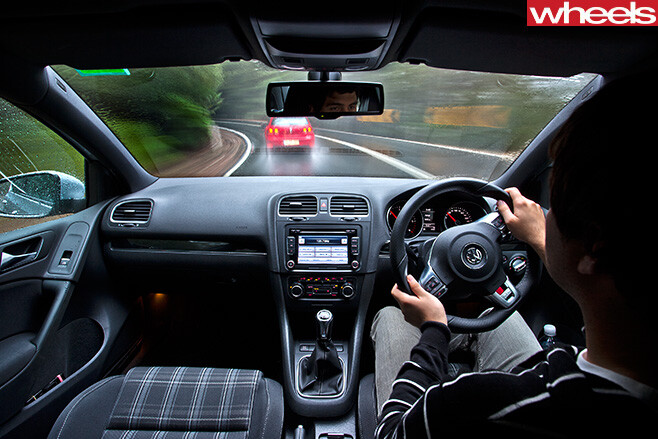 Unlike the two BMWs, though, there is a clear difference between the Golfs’ dynamics. The oiler’s cast-iron block (unlike the 330d’s lighter all-alloy variety) and tougher internals place more weight over the GTD’s nose. In isolation, it’s still typical Golf – ace balance, rock-solid composure, stacks of fun. However, by comparison the lower-suspended GTI  feels darty at the front-end, engaging and dancing with you in a way the heavy-footed diesel can’t.

Consider the GTD’s $1200 saving up front in addition to its $340-cheaper servicing costs over 100,000km and 30-to-50 percent fuel saving, and the oiler makes good financial sense. But it isn’t as quick or sharp as a GTI, and for true enthusiasts, that still makes petrol power worth the premium.