Japan's automobiles are getting better and better each year. The Toyopet Tiara is one of the brightest to date and has many original, well-conceived ideas.

Tiara with the unexpected sparkle

HAVING been impressed by the sturdy, powerful Datsun Bluebird and the beautifully finished medium-sized Prince -- both well-known here in Rabaul -- it was with more than usual interest that I lowered my frame into a pale blue Toyota Tiara, first of its kind to arrive locally.

From first sight I'd admired its clean almost-Ford lines while its Rabaul selling price of £845 (a mere £50 above that of the Datsun) seemed to represent fairly good value.

I was, however, quite unprepared for the shock of discovering in the Toyota Tiara a bewildering succession of new, fresh ideas. I will list some of them shortly.

Basically the Tiara is a light four-five seater with trim lines, good ground clearance, top-notch finish and a big beefy four-cylinder engine that turns out bhp with almost free-loading ease. It is easy to see that Japanese manufacturers have been quick to answer Round-Australian trial criticism that their cars are over-bodied and underpowered. 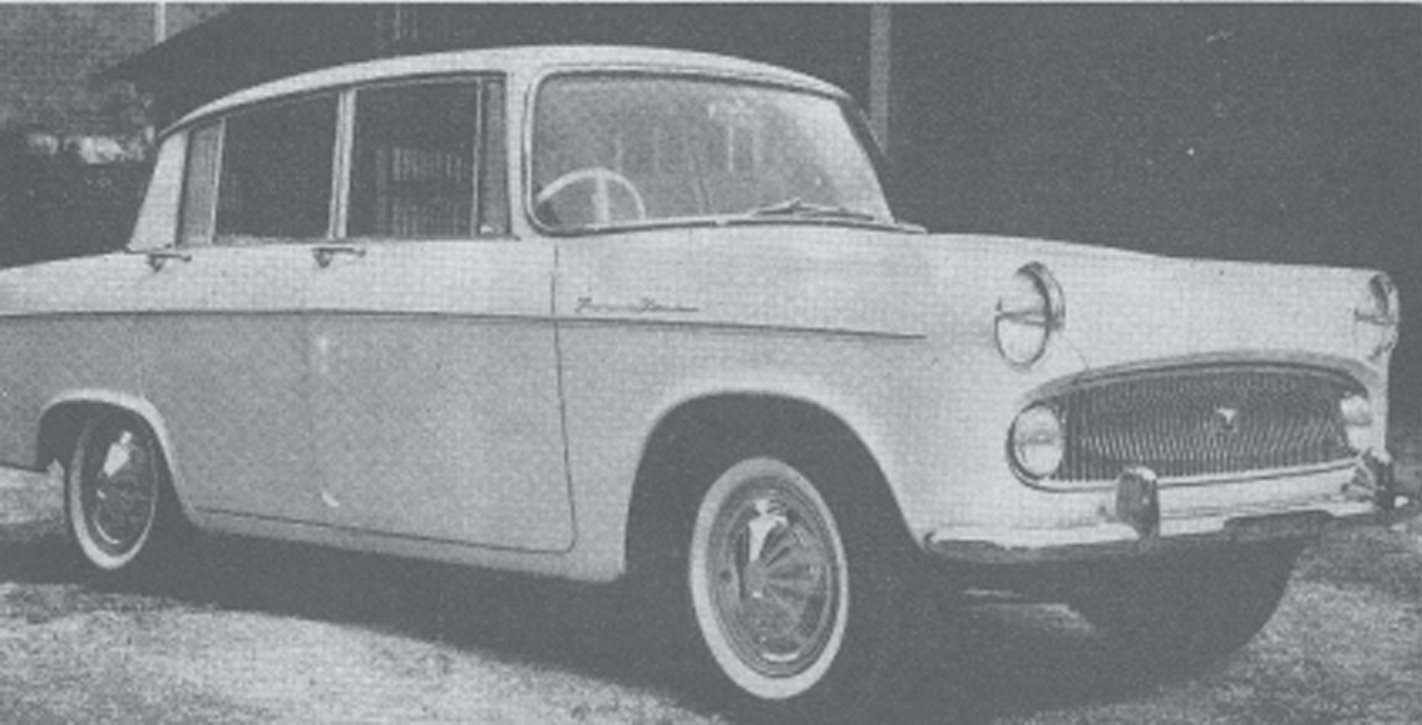 Today's Tiara (and Datsun) offers power-to-weight ratios that are outstanding … and they are Impressive performers accordingly.

At a quick look, the Tiara is strictly orthodox. It has four wheels, independent springing, steering column gearshift, two bench-type seats, an orthodox instrument panel and – Hansa-like –a row of buttons to work the accessories. But there the orthodoxy ends.

Sure, its 13-inch wheels are sprung independently at the front, but hang from a longitudinal torsion bar and splayed tele-shock arrangement looks rather like a scaled-down version of that on a Chrysler and includes a man-size stabiliser

Rear is even more dramatically different -- there are wide-leaf quarter-elliptic leaf springs supplemented by coils. And to cap the lot there’s that old sports-car favourite, a panhard rod – plus, again, splayed telescopics.

From a layout like this you'd expect either something quite erratic or something very good; you get the latter. In the departments of steering and handling the Tiara is one of the tautest little cars I’ve ever driven, and it copes with the roughest Territorian roads like a feather-bed.

Cornering is flat, definite and capable. There's a trace of oversteer which helps tremendously if you're in a hurry, while under deceleration the car understeers.

The steering (31ft turning circle, worm and sector) is one of the most shock free systems ever, regardless of road surface.

The big engine looks like that of a Vanguard four and is square in dimensions. It draws its nourishment from a 10.6 gallon tank via a large auto-choke two-barrel carburettor which sports a gigantic air cleaner.

It starts easily, idles smoothly in spite of its 8.4 compression, and will draw the car smoothly away in top gear from a mere four to five mph.

The two-barrel carb, though it looks rather strange by Western standards, is effective. The accelerator has two definite pressures – Go and Really Travel. When you take up the second pressure the second barrel cuts in and – wow!

Silence at all speeds is amazingly good and one cannot detect the four cylinder beat no matter how hard one attunes ones ear. Much of this must stem from the thick layer of undersealing which the Tiara wears, even under the bonnet and down the bulkhead.

Gearshifting is accomplished by an upstairs-type lever which works on the wobble rather like that of the old Citroen. Sounds queer and looks queer – but it moves accurately and snappily. I'd defy even a tyro to miss his gear on the Tiara.

Other controls include pendant pedals – a lovely light clutch and a brake which is feather-soft but most commanding. From which we pass to the row of push buttons along the lower edge of the dash. 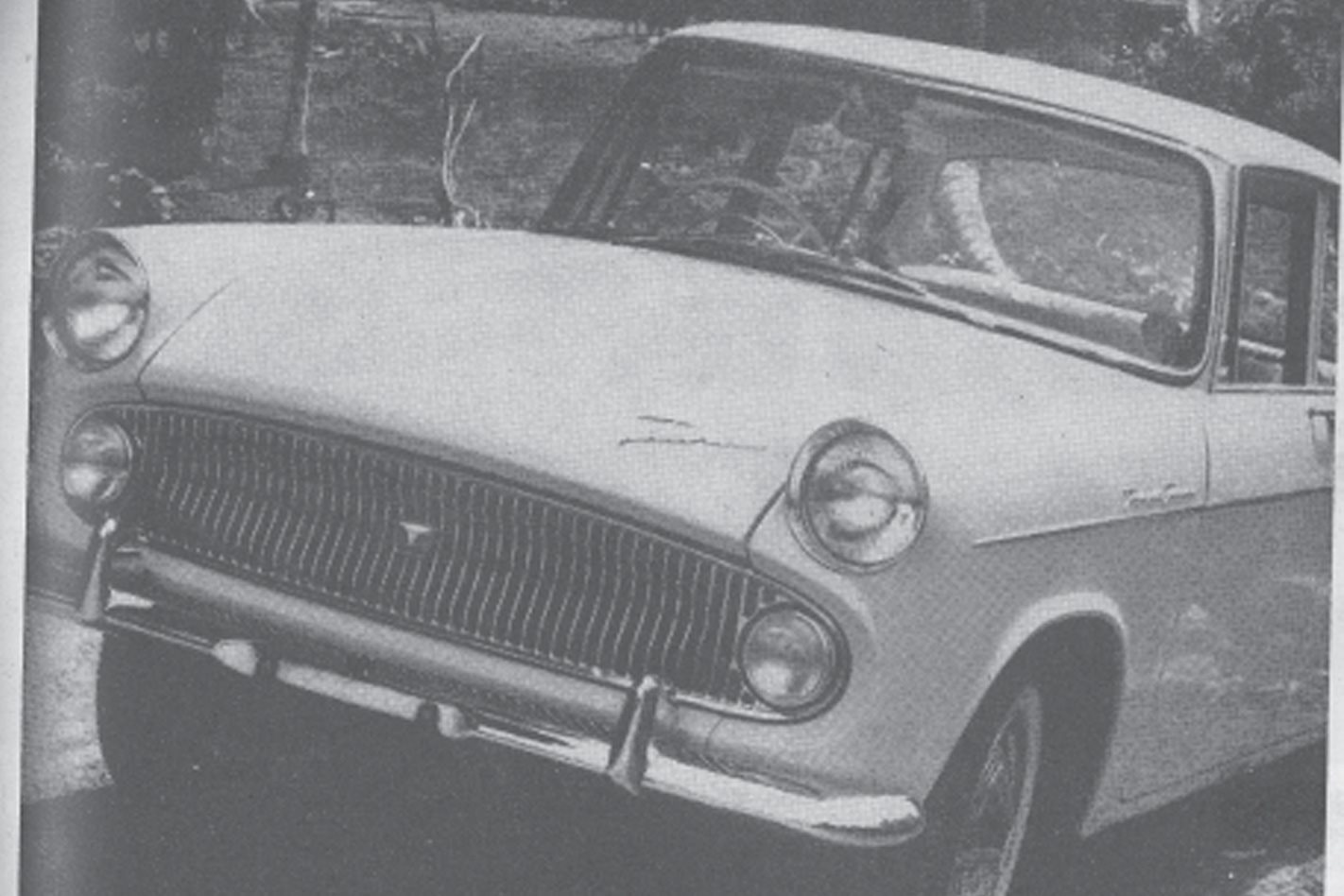 Believe it or not, these ARE push-buttons – for headlights, sidelights, fog lights, heater, and (separately) for either high speed or low speed windscreen wiper. Push them they go on; depress them slightly they click off. Simple, positive, and unmistakable.

Even the umbrella-type handbrake can be reached easily, snaps off quickly, works well and has a floating movement that has the driver pulling the cable in plane irrespective of the degree of brake applied.

Individually, there's scarcely an orthodox item on the car that doesn't, when investigated, reveal some completely new approach in its method of operation!

The pushbutton door locks work on an unusual non-slam system-and the doors close with the sound like those of a Bentley.

Even the horizontal strip-type speedo (up to 100 mph) has a gimmick. It shows a green line until you exceed 50 mph then switches to bright red so abruptly that you just can't drive with the colours half and half. Don't ask me how -- that's how things are.

The trafficators, self-cancelling, are operated by rotating the horn ring a notch in the required direction.

There is foam-filled safety padding throughout the car – top and bottom of the dash, across the roof, on both sides and beneath all door trim. The Tiara must be a comfortable car in which to be overturned.

A delightful gimmick is a dash-top ashtray which, when one raises the lid, lifts up a de-ashing grille to meet your cigarette.

Even the fuel filler is different. First you open the roomy boot, then depress a little lever inside, which lets the rear number plate drop down against spring pressure. There, behind the plate, you find the filler cap.

Same fresh approach to opening the bonnet. You tug (very lightly) a little lever under the dash, then raise the bonnet from the rear to reveal the engine in all its glory – and accessibility. Battery and brake/clutch reservoirs are also beneath the bonnet. 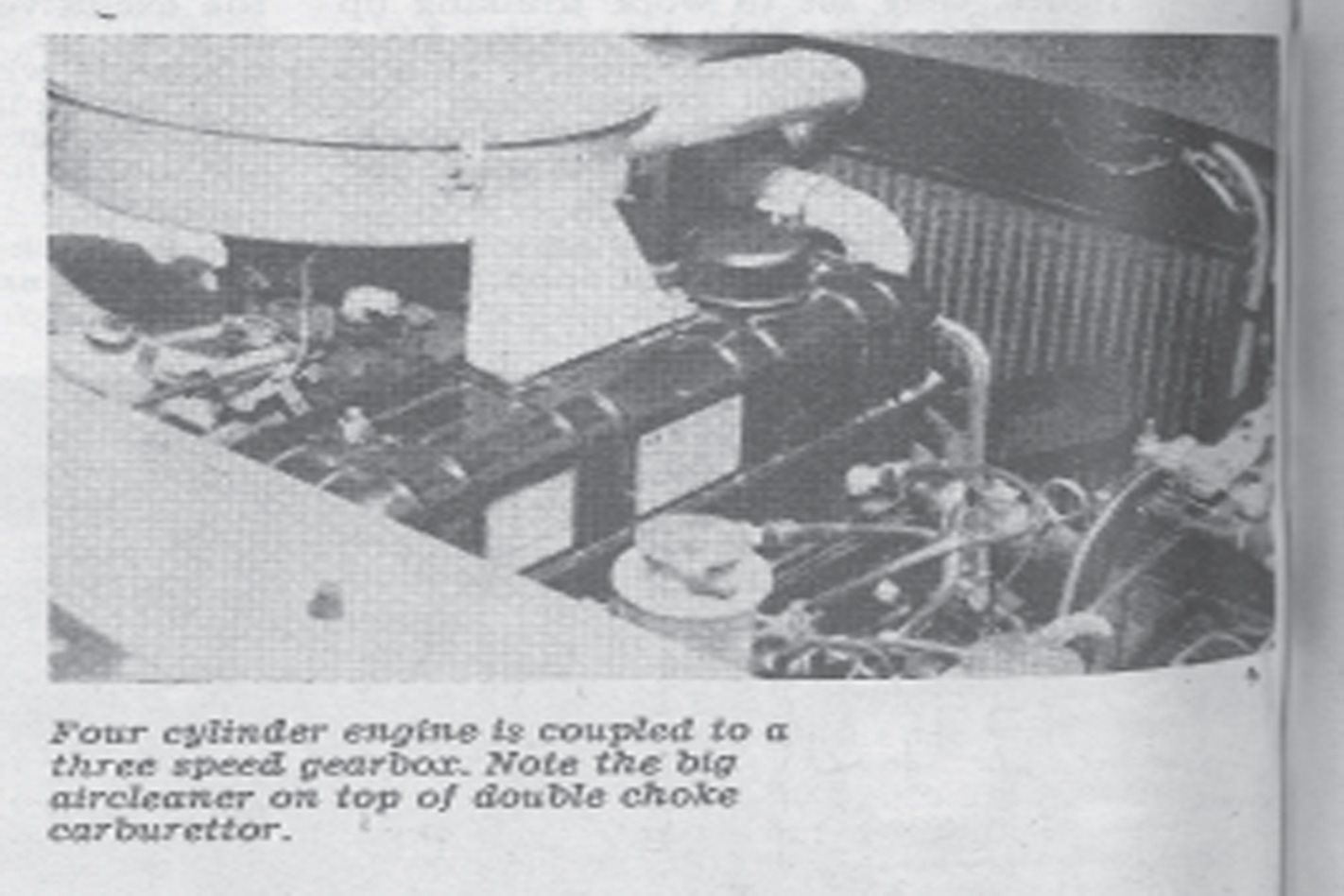 You can go on and on. Everything you touch seems to be new and fresh, from the thin pillars of the semi-wraparound screen and narrow, effective vent panes to the downward-opening glovebox which responds to a push-button underneath. Even the door armrests in the Tiara double as padded map-pockets.

There's a centrally mounted cigarette lighter, and even that has been revamped so that it lights almost instantaneously instead of after the customary 10 second delay.

Rabaul roads have a 40 mph limit which is as fast as anyone can travel with safety locally – thus I was unable to try for anything like the full performance available from the Tiara.

Nevertheless low gear or the three speed box gives you 30 to 32 mph, second 50 to 65 mph, and top should seem to be around the 715 to 78 mph mark, instead of the 85 mph claimed by the manufacturer.

Still – I could be wrong here, since my figure is only a formed guess.

Acceleration is strong in all gears and is especially praiseworthy in top.

The worst feature of the Toyopet Tiara, to my mind, is its lack of legroom at the back when the front seat is extended to the limit of its reach. Even so, it’s not quite as cramped as, for example, a Series 1 Morris Major; and is certainly wider and has more headroom. 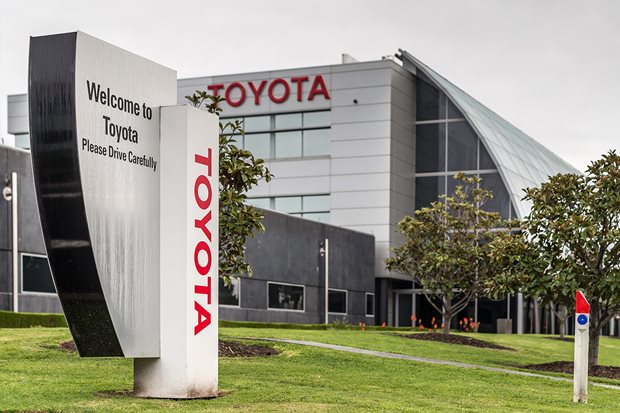 EDITORIAL: Why Toyota's closure isn't as gut-wrenching as Ford and Holden's

As Toyota closes its doors for the last time, we think back thankfully on 54 years of car making, the thousands of hard-working Aussies who are affected on this solemn day 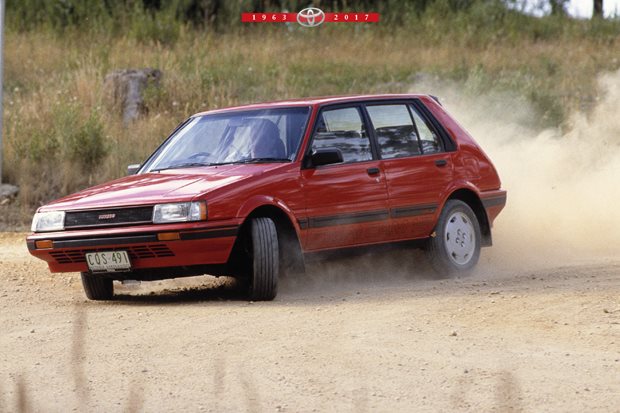 A selection of the best - and worst - Toyotas made in Australia 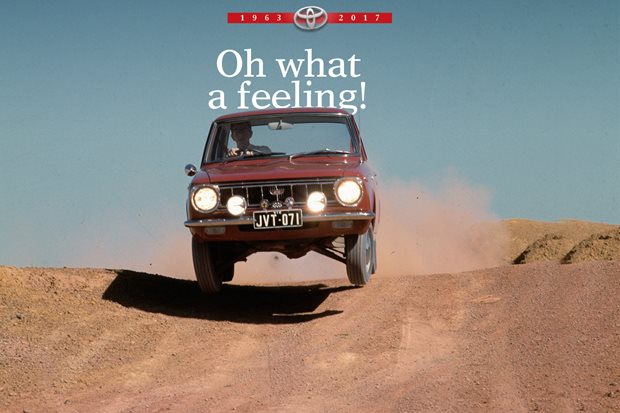 For 54 years, Toyota quietly got on with the job of building the cars that Australia – and the Middle East – needed, if not always wanted 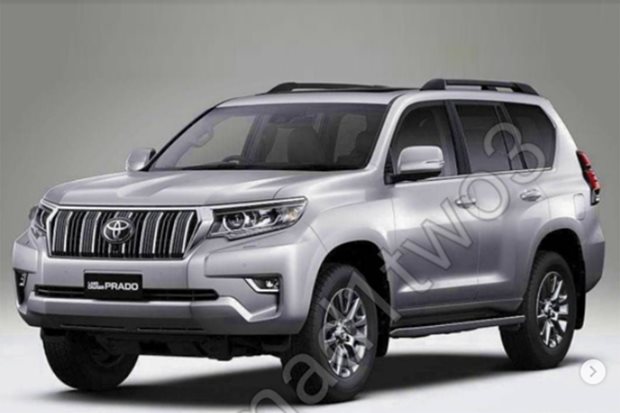