Could you live with a supercar? 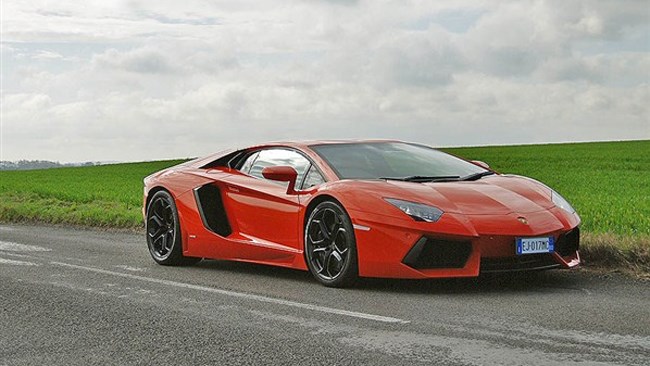 Could you live with a supercar? If asked that question by a man dangling the keys to a Day-Glo orange Lamborghini Aventador, most reasonable people would automatically respond with a breathless 'yes' — possibly while scanning the room for something to bash him over the head with.

Could you live with a supercar? If asked that question by a man dangling the keys to a Day-Glo orange Lamborghini Aventador, most reasonable people would automatically respond with a breathless 'yes' — possibly while scanning the room for something to bash him over the head with.

And why wouldn't they? Supercars are, after all, the ultimate evolution of the car as we know it. Who wouldn't want one lurking under a silken dust sheet in their own dehumidified garage ready for those occasions when they fancy a bit of a blast?

Except, there is a big difference between owning a supercar and having one as your sole means of everyday transport.

The kind of lavishly heeled individuals who spend close to $800,000 on Lamborghini's flagship model will, it's safe to assume, have one or two other vehicles on their personal fleets as well. These additional cars will be better suited to mundane tasks like picking up groceries or taking the dog for a walk and they'll leave the fire-breathing Aventador free to do what it does best.

If this 515kW road-eating monster was your only way of getting from A to B, you might think of it differently. Just how differently was what we wanted to discover.

The old in and out

Little things that you take for granted in ordinary cars can become a challenge in a supercar. Things like getting in.

The upwards lifting scissor doors of the Aventador contribute massively to the car's already overinflated sense of the exotic. They add drama, wow-factor and confirm, if confirmation were needed, that this isn't your everyday runabout. They aren't, however, the easiest things to get in and out of.

If you don't currently hold a black belt in yoga, entries and exits from the Aventador can be a scramble as you lurch forward through the low opening, while ducking to bypass the upstretched door. The whole ballet is made more problematic by the inescapable fact that as you're exiting your car with all the grace of a tailor's dummy emerging from a high speed water slide, everybody in the vicinity will be watching you.

Buy a Lamborghini Aventador and everybody will be watching you pretty much all of the time. Most of the paint colours offered by Lamborghini look like they'd be turned down by traffic cone manufacturers for being too bright. But even if you specify your car in a sober black or graphite hue, it's not going to be mistaken for a Volkswagen Passat.

If you drive an Aventador, you will be looked at incessantly. The best advice is firstly to get used to it and secondly, always make sure your flies are done up.

Soundtrack of your life

As well as looking like it's descended from another planet, the Lamborghini Aventador sounds out of this world. The 6.5-litre V12 engine mounted inches behind your head gives bystanders who can't yet see the car ample notice so they're ready to be amazed by the time it finally does hove into view.

The exhaust system incorporates two mufflers with control valves regulated by the engine management computer. It gives the Aventador a stunning repertoire of sound effects, all of them loud, from a low rumble as it strains at the leash in traffic to a full bore shout at the screaming pinnacle of the rev range.

With the almost unbelievably aggressive servo-actuated mechanical gearbox kicking out a cacophony of roars and growls as it blips up and down the gears, this is a car that lets the world know you've arrived even before you have. If the bloke over the road buys one and you don't yet have double glazing, now's the time.

Having successfully got into the car, overcome the embarrassment of being gawped at and damaged every greenhouse in a kilometre radius just by thumbing the starter button, it's time to drive.

By supercar standards, the Aventador's Formula One-inspired pushrod suspension serves up decent ride comfort at low speeds. By the standards of the family hatchbacks, SUVs and superminis most of us drive every day, it's rather choppy.

In order to deliver lightning fast direction changes and pull face-melting cornering forces, a supercar needs to be super rigid in its chassis and super stiff in its suspension. The Aventador is, but on good surfaces it's comfy for a car of its ilk. As the road deteriorates, so does the ride, though. Cruising highways quickly becomes tiring and on potholed roads it can feel like you'd be better off riding a pneumatic drill.

Along with the sometimes tooth-chattering ride, prospective supercar purchasers should also be aware of the ground-hugging ride height. The aerodynamics that allow the Aventador to pass the 320km/h barrier with lungs to spare mean it has to stick nice and close to terra firma.

At the car's 350km/h top speed you'll be glad of its limited ground clearance but on an urban street strewn with speed humps it could become a problem. Fortunately, Lamborghini has installed a handy button which raises the nose of the Aventador a few centimetres to prevent the front spoiler running aground with wallet-shattering consequences. All you have to do is remember to press it.

Not quite a walk in the park

The speed hump isn't the supercar's only enemy in the urban jungle. Finding somewhere to park the Aventador proved a difficult and sometimes nerve-wracking experience. The car is nearly 4.78m long and 2.03m wide, not including the wing mirrors. That's 40mm wider than a Rolls-Royce Phantom and bigger, you'll soon discover, than will fit in most parking bays.

Once you find a space that you think the Aventador might conceivably be teased into, you have the challenge of limited visibility through the slatted rear window that covers the engine bay and steering that's on the He-Man side of heavy.

At least Lamborghini has installed a full array of parking sensors and a reversing camera to help, but these won't save you if you get overconfident with a roadside space and the car's beautiful alloy wheels cosy-up to a kerb stone.

Taking the Aventador into the tight concrete confines of a modern multi-storey would be like taking a chocolate éclair into a Weight Watchers meeting, it probably wouldn't stay intact for long. The one saving grace might be that at only 1.1m high, you could probably drive it under the exit barriers without paying.

Living with an Aventador might not be as straightforward as with some other cars but you quickly forget any niggles when the road opens up ahead. The 6.5-litre V12 places 515kW and 688Nm of torque at the beck and call of your right foot and wherever you stomp it, the view through the windows instantly transforms into the swirling chaos of Edvard Munch's The Scream.

Yes, the Aventador is hugely fast but if you are driving it on public roads, that only means that you'll have to exercise huge restraint. While 110km/h feels stupidly slow in this car, at 50km/h you have to check that you're not going backwards. At least sedate driving minimises the heat coming from the V12; explore the upper end of the rev range too frequently and it gets very toasty in the cabin very quickly.

Staying within the bounds of the law isn't made any easier by an instrument cluster dominated by a huge digital rev counter display picked out in red and yellow.

It looks fantastic and is perfect for prompting you to snatch the next gear before you bash heads with the rev limiter at a screaming 8,250rpm but the car's actual speed is treated as a secondary issue in this motorsport-inspired layout. It's shown in a small white box on the right of the rev counter and checking it at a glance when the Aventador is busy hurling you to 100km/h in 2.9s is not easy.

It's a majestic machine the Lamborghini Aventador, one that can turn the simple act of driving into one gigantic adrenaline rush and the sort of people who'll be spending close to $800,000 on one won't need it to do any more. They'll have other cars to do the dirty work and the funds to buy, fuel, insure and maintain an Aventador with enough left over to winter the yacht in Monte Carlo harbour.

So, could you live with a supercar?

Brilliant though this all-wheel-drive, 350km/h supercar is, there's no escaping the fact that it's also a two-seater with minimal luggage space that's as wide as a minibus, struggles with speed humps, sounds like the four horsemen of the apocalypse on a stag night and will probably accumulate points on your driving licence like Justin Bieber collects Facebook fans.

That's the reality of trying to use a supercar as an everyday car but would it actually put you off trying? The raw power of the Aventador's appeal means that even knowing all this, most car fans would only weigh up the practicalities for a millisecond before answering the question of whether they could live with one with a big, bright orange, seven hundred horsepower 'YES'.

We definitely would but we'd do so safe in the knowledge that we'll never have the cash to try. 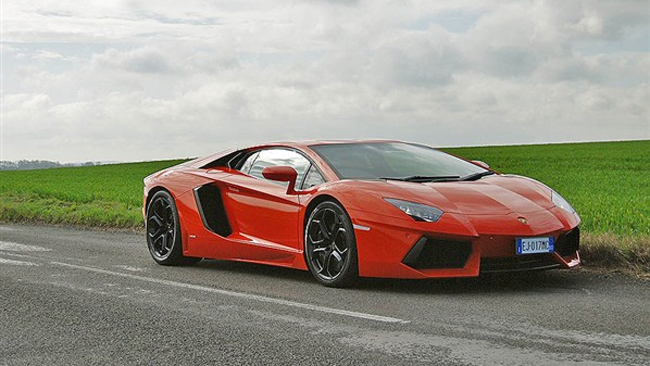 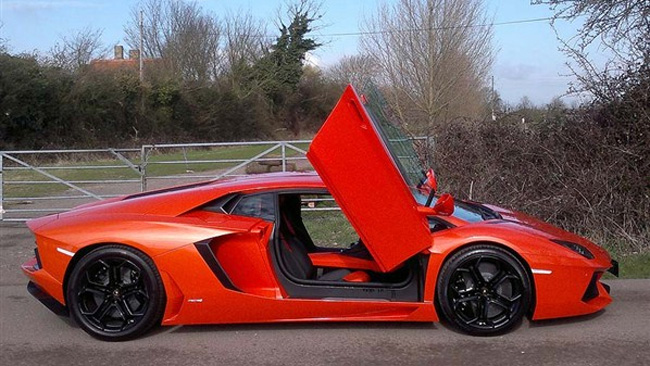 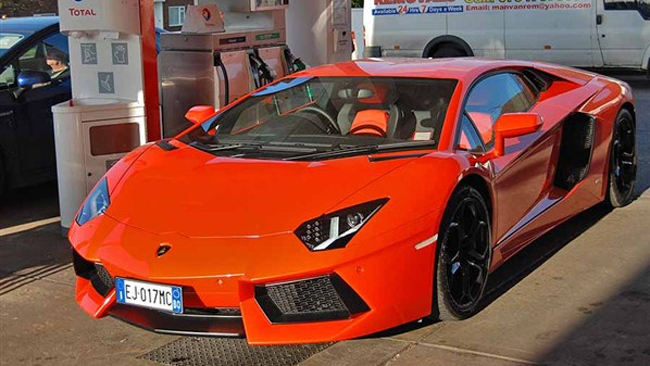