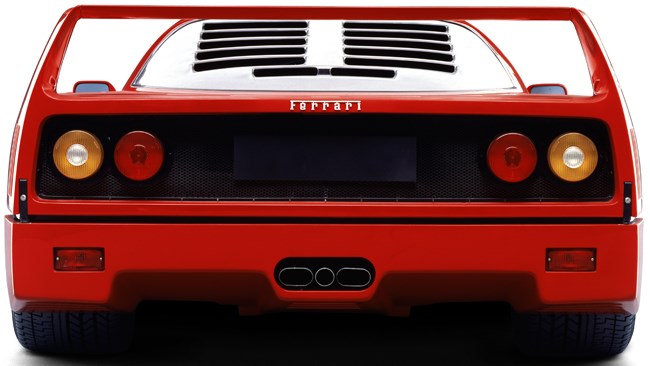 The story goes that Luca Cordero di Montezemolo, manager of Scuderia Ferrari in the mid-1970s, was lured back to run the company after privately buying a Ferrari 348 and loathing it.

While it was fast and good-looking, he found it cramped, impractical and unsophisticated. Under his direction since 1991, Ferraris have left those bad old days behind.

All of which helps put the Ferrari F40 of 1987 into context. And explains why, nearly a quarter of a century later, the F40 is still one of the world’s brawniest and most awe-inspiring supercars.

The F40 was launched ostensibly to mark Ferrari’s 40th anniversary. It’s also said that the car was meant as an ultimate performance statement on behalf of Enzo Ferrari, who had seen his beloved prancing horses hobble through the decade in Formula One. Only 14 months after personally presenting the F40 at Maranello, Ferrari himself took the chequered flag at age 90.

The F40 was every inch a product of the 1980s F1 ‘turbo era’. It made no apology for the rawness of its exposed carbonfibre and Kevlar, the uncompromised (and uncompromising) handling of its rear-drive chassis, or the hand-grenade delivery of its twin-turbocharged and intercooled V8.

The latter, and indeed the car itself, owes much to the 288 GTO of 1984. This Group B omologazione special was loosely based on the road-going 308, but in reality had a very different and significantly longer, composite-reinforced steel spaceframe chassis with a twin-turbocharged, 2.85-litre V8, mounted longitudinally.

Prior to the Group B category’s death-knell in 1986, Ferrari built a batch of five evoluzione versions of the GTO. Extensively modified for racing (and, incredibly, rallying), these featured stronger chassis sills, bigger turbos and droop-nosed aero-bodywork that, like the chassis, laid the foundation for the F40 that followed.

The F40’s engine, designated F120A, displaced 2936cc and, with 1.1 bar boost, developed 356kW. The five-speed gearbox was another GTO carry-over. The non-structural body was Ferrari’s first all-composite effort, its only obvious link with production models being the 308-sourced windscreen.