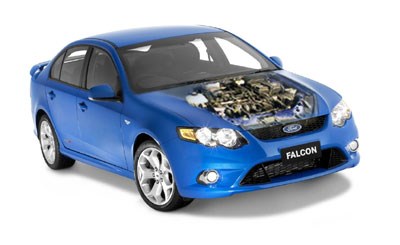 It all makes sense, says Burela. And it also makes sense to bone plans for a local Focus.

Ford Australia president Marin Burela says the call to abandon the planned local production of the Focus AND the decision to introduce a turbocharged four-cylinder Falcon from 2011 were not related.


One didn't replace the other.

The upbeat Geelong-raised trump proclaimed that Ford now "has got it right" and that the right business path has "not happened by accident".

He's backing his hunch that Australians will continue to buy the Falcon, especially if Ford can offer tantalising fuel economy without a trade-off in performance.

In a $230 million spend, the existing in-line six will be tweaked to meet new fuel efficiency and emissions targets, but the big news is the introduction of the new 2.0-litre turbo four which he insists will hit the spot with consumers and help give the Falcon longevity.

The Falcon will become the first rear-drive application of the four-cylinder engine anywhere in the Ford world, signalling the blue oval's intent not to give up its traditional large-car volumes without an almighty fight.

More than this, the future engineering moves have the scope to broaden the Falcon's appeal in the marketplace, opening a door to fleets and governments.

"There are certain fleets that won't entertain us without a four-cylinder Falcon. This will change."

Surprisingly, the green light to go with the four-cylinder was made before the powerplant had been tested in a Falcon. Burela dismisses any raised eyebrows with a dissertation on the ability of Ford's virtual tools to accurately predict the outcome of the union.

The Falcon sedan, Falcon utility and Territory SUV are built on the same platform with total volumes of around 220,000 vehicles annually.

A powertrain director for Ford in a previous life between 1996-8, Burela says he knew the engine, the castings and the facilities well enough to make informed decisions.

"It became obvious there was a way for the six to become Euro4 compliant," he went on.

Burela conceded that while the large car segment has lost volume in recent years, there are just three participants. "It's a great segment to be playing in."

Helping extend the life of the six and the Falcon too, he suggested, was Australia's move into alternative fuels, including E-gas/LPG.

"We have sold 85,000 E-gas units and Ford is the leader in alternative fuel - with fleets and private buyers.

Burela says that Ford customers have been clamouring for the Falcon not to be taken away. They want the size and the comfort and better fuel efficiency.

"But our research tells us that people are divided between a preference for rear drive, all-wheel drive and front drive..."

Maybe he is softening us for one or more alternatives to rear drive.

"If anyone knows anything about building large cars efficiency, and with intent, it's the Ford Motor Company," he concluded his justification to concentrate on the traditional staple. "It's done it for 85 years."

"It made no sense to build a small car here in this [current] environment," Burela declared as he vindicated the decision.

"There are 24 different competitors fighting for 180,000 units in the [small] C segment in this country," said Burela, proceeding to ask then answer his rhetorical question on how to make a locally produced small car such as the Focus viable. He explained the massive challenge of grabbing chunks of market share from the likes of Hyundai, Mazda and Toyota in this fiercely fought battleground, and turning a profit.

He also anticipates the small car segment will soon be invaded by even cheaper Chinese cars.

Burela says a decision on a future Falcon model doesn't have to be made until the end of 2011. By then, the Ford boss says, he will have tested and verified the potential of another Falcon.

And what of the V8 engine? "The V8 determines its own future. Right now, there are no plans to change it although more private buyers are choosing the turbo six."