You need hair on your chest if you want to realise the full potential of Ford's new GT. lt lives up to the gran turismo image in the best way - like a gentleman.

IF ever an Australian-built car deserved the title of GT it must be the latest Falcon GT. In the most grandiose, big, beefy way the XT series Falcon GT with its 230 bhp, V8 burble is a true grand tourer in line with the best British and Continental makers can dish up.

But just as the Falcon is a thunderous GT, it has an entirely schizophrenic nature which changes as the driver's mood changes and can become the mildest and least obtrusive shopping buggy or commuter transport.

The XT GT is far more refined than the original Ford Falcon XR series yearFalcon GTs which took out honors for Ford in the 1967 Gallaher 500. The XT series does not subscribe to the hackneyed idiom of "any color as long as it is bronze" either. It comes in a wider choice of white and blue, as well as the ubiquitous gold. However, the GT stripes remain to distinguish the XT series. 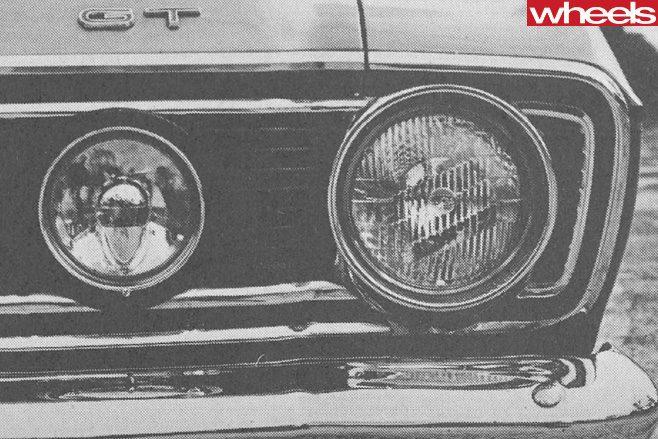 But the main refinement has centred around the clutch and gear change mechanisms. In the previous models these were heavy, truck-like and quite uncouth for a normal type sedan. With 225 bhp to feed through the drive train the problem was understandable. Ford Australia has now come up with two answers. Either you abolish the clutch altogether and have the alternative of the well-tried automatic transmission suitably strengthened to take the extra power or you can still stick with the manual shift, which has been improved out of sight with less movement in the gear throws, less effort, and a clutch with quite an acceptable pressure which will not develop quadriceps of a ballet dancer in the first city block.

The first, and most lasting, impression of the GT is how completely quiet and docile it is from either the driver's or passengers' seats. The car is largely wasted for around town, commuter work – although very desirable just the same - and it is not until you try some fast, open highway driving that you can fully appreciate the GT's capabilities. 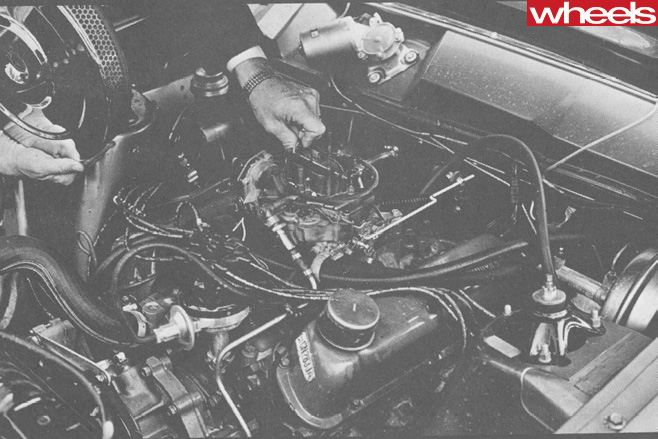 Fantastically, the GT will cruise at an indicated 115 mph and for the sake of the road safety authorities we will emphasise at such speed the GT is safer and more stable than many lesser machines are at under 50 mph. As a point-to-point car for, say, interstate trips, the GT has few peers.

Using the new 302 cubic inch motor of the XT VS series, the Falcon's power is up 5 bhp to 230 bhp which rates as 20 bhp more than the optional 302 ci engine used for the Falcon 500, Fairmont and Fairlane.

The torque band of the V8 is quite astounding and even with the few "hot bits" to extract the added power for the GT, the engine is absolutely smooth and will pull away from 500 rpm in top (12.5 mph or 400 rpm less than the GT's idle) without the slightest hesitation and with more acceleration than any four-cylinder cars would have in second. The engine is in fact far smoother and has better torque than the comparable GM-H V8. From the dead low of 500 rpm it will just rush up to a limit of 5250 rpm (tacho redline) which in gears is equivalent to 47 mph in first, 69 in second and 97 in third. Above 4500 rpm there is a slight taper off. 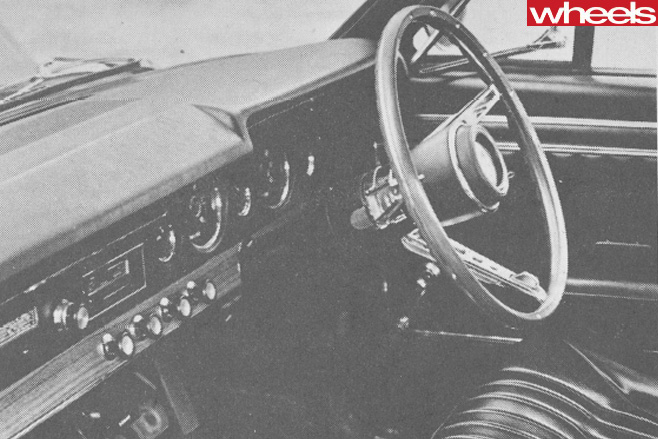 As we said, despite all this beefy power the GT is quite manageable and not at all the beast one would expect. The power is fed through the four-speed, all-syncro gearbox which remains the same unit as the XR's but with much improved linkages. The long, heavy movement of the XR has given way to a short, straight stick which is on the heavy side but is very precise. Reverse is now through a normal, springloaded gate and next to second instead of the T-bar which had to be lifted before selecting reverse in the XR series. The clutch has a slow movement to the extent that at first it feels as though you could smartly lift off the depressed pedal and have it take up seconds later. In effect, and with some practice it is easy not to use all the clutch travel and gain a very fast change for snap shifts.

However, we found a rattle from the gear lever with power on most annoying. To control the power at the tail there is a limited-slip differential with a special 3.0 to 1 final drive which is exclusive to the GT - the other Ford VSs use a 3.23, with a 3.50 in the sixes. Wider-than-standard rims carried on normal 14-inch centres are shod with radials - Michelin XAS on the test car.

The GT has been lowered all round with increase rate springs for better handling. In the handling department the GT is quite exemplary for an 111-inch wheelbase car. Even in slippery conditions it has good reserves of adhesion of which we credit the tyres for a large part. But despite the big power only sheer hamfistedness or stupidity will get the tail dramatically sideways. On dirt the story is different as a tap on the loud pedal has you grabbing for opposite lock, albeit in a reasonably controlled manner. However, we feel that where the Falcon has been set-up tor a fast type of handling which can be "iffy" in the hands of novices the equivalent Holdens we have driven to date (and we imagine the Coupe will follow suit) are immensely predictable and for want of a better word "chuckaboutable" if somewhat slow when it comes to speed handling. 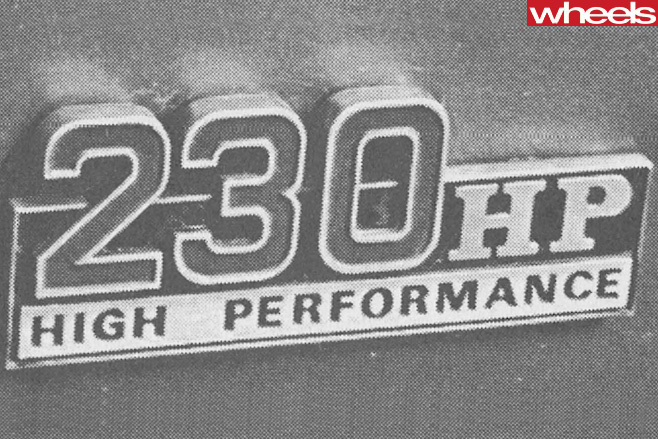 Some staffers felt the ride of the GT too hard, but overall it seems a fair compromise. With a heavy V8 only just aft of the front axle line it is predictable that the GT is a consistent understeerer. But this never becomes a serious problem as the car will set itself into a controlled front-wheel slide if pushed too hard in the wet or on dirt. Unless the brakes are applied at this stage (which instantly produces an uncontrollable situation) the sensitive steering can be used to grab back traction and point the big car where it should go. In tight situations at speed the understeer takes the form of a wallow not uncommon to front-engined family cars of this size, but better controlled because of the stiffer suspension.

At speed the steering is ideal. A small wood rim, alloy spoked wheel which really requires the use of gloves gives precise control over just where the front wheels should be pointed and although the nonpower-assisted 16-to-1 ratio is too heavy for parking, it does let the driver have full feel over the steering to the extent that kickback will start when the alloy spokes dig into an unbegloved hand. Three horn presses are set into the alloy spokes, and the centre boss is heavily padded.

The GT rates highly as a fairly complete car on the equipment side. A heater-demister and the two fresh-air vents normally provided on a Ford Falcon are standard. Two Lucas Ranger driving lamps have been set into the all-black grille. Unfortunately only one worked on the test car, but with both going, and both well set, their worth is undeniable. They had been wired into the dipper circuit to extinguish on low beam with a further isolating switch similar to the wiper switch on the facia; certainly the best way of wiring. A boot light comes as standard even if a glovebox light doesn't. The seat belts were of the lap sash type in the test car and were fiddly to operate. When you eventually adjusted the two sashes separately, they inevitably loosened themselves after 10 minutes' driving.

One grave omission from a driver's car of this calibre is a headlight flasher. The seating is very good and light in character with the luxury, effortless grand tourer that this Falcon is. The front squabs are fully-reclining with a further large vernier knob to give smaller adjustments for rake. Good support under the thighs means you step from the car after long distances quite fresh. The two-speed wipers and power washers work well until the top end of the speed range where, despite the best efforts of Ford's engineers, the twin jet-per-wiper washers have their water blown off the screen and the wipers have a real struggle to move back and forth in contact with the screen.

Taking what we did see of the car, from its lusty but smooth V8 power to its taut suspension, from its precise gearbox, to its big, cushy seats and black trim the GT Falcon struck us as being one of the best integrated present day cars to follow in the true gran turismo tradition.