Okay, so Ford realised the decision to kill off the V8 was a bad one. Here’s how they breathed new life into it.

Okay, so Ford realised the decision to kill off the V8 was a bad one. Here’s how they breathed new life into it.

FORD'S' BRAWNY V8 is back with a vengeance. The return of the big-banger engine to Ford’s local line-up was approved by company headquarters in Dearborn only days ago.

Although it remains a tightly guarded secret, Wheels has confirmed that by April next year, Ford Australia will be selling V8-powered LTDs, Fairlanes and Falcons, returning the company to the high performance market for the first time in nearly a decade.

As predicted in our news pages last January, Ford has chosen the American-built 5.0 litre High Output engine, best known for its fitment in the Mustang HO. It produces marginally more power and torque than Holden's born-again eight-cylinder Statesman and Holden Commodore.

And Ford's slight performance edge may grow larger as the company strives to re-establish a presence in the market it abandoned when it axed local production of the V8 in 1982.

Officially, Ford is denying that the return of the big eight has been signed, sealed and delivered - but impeccable sources in the USA say the first batch of 12,000 fuel-injected engines will begin flowing from the company's Cleveland plant before Christmas.

"We're putting the package together right now," Ford engineer Wallace Beaber told Wheels in Detroit. "The only changes we have to make is so you guys can fit your steering wheel on the other side. Functionally, it will be just the same as the Mustang HO engine." 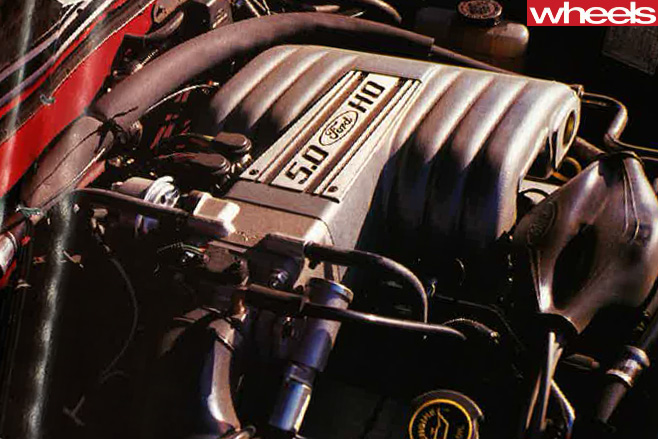 The standard US-market 5.0 litre HO produces 168 kW at 4200 rpm and 408 Nm of torque at a mere 3200 revs. That's three kilowatts and 23 Newton metres more than Holden's VS. Those are minimum figures. Ford Australia engineers are working to decrease exhaust back pressure in the  Fairlane/Falcon fitment in a bid to coax still more performance from the computer-controlled 90-degree V8.

Eight cylinder LTD, Fairlane and Falcon fitments should appear simultaneously, possibly as early as the Melbourne Motor Show next March. The V8 manual combination will arrive some months later, probably as a direct rival to the Holden Commodore SS VS. Ford Australia president Jac Nasser Is also keen to establish a "hot-shop" special vehicles division to build an image-leading Falcon V8. Wheels understands discussions have already taken place with Peter Brock, Ford specialist tuner Mick Webb and Allan Moffat. Webb's SVO operation would seem to be most logical, although the man himself declined to comment beyond confirming that he had "met Jac in April".

Depending on which final drive ratio Ford chooses, the Falcon V8 auto should post 0-100 km/h times around 8.0 seconds with the standing 400 metres in around 15.5 seconds. The heavier Fairlane and LTD models should be closer to 9.0 seconds from rest to 100 km/h and around mid-16s for the metric quarter mile.

Ford's decision to go with the V8 follows the end of the Bill Dix/Max Gransden era at Broadmeadows. Gransden, the marketing vice-president who axed the VS in 19S2, was a vocal opponent of anything greater than six cylinders throughout the remainder of the decade. Upon his retirement in 1989, he conceded the decision to abandon the V8, while right at the time, was a mistake - given the benefit of hindsight.

Holden nearly went down the same route. Only a last-minute re-think saved the GM 5.0 litre from extinction when unleaded fuel was introduced in 1985. After making that investment, Holden went on to substantially upgrade its powerplant in 1989, adding computer-controlled fuel injection, a stiffening package for the cylinder block, ram-tuned inlet manifolding and more durable high-tech internals. 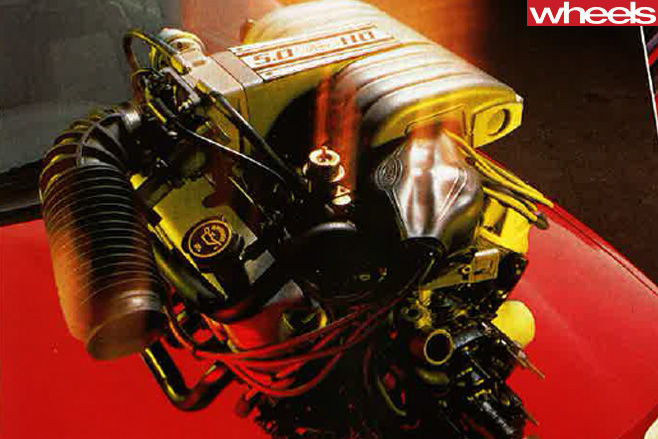 Ford's HO engine has a similar lengthy history of periodic updates. Although it can trace its roots back to 1960, the present 5.0 litre (or 302 cubic inch) capacity was introduced in 1968 for the Mustang, Cougar, Torino and Falcon models in the US.

In 1982 it was dusted off for a new role. Ford chose to drop the 2.3 litre turbo four-cylinder from its Mustang line-up and re-instate a modernised version of the V8. Ford engine-man Wallace Beaber was involved in the update: "The 5.0 litre was brought back to fill the gap," he says. "In engineering, we decided it ought to come back not just as a run-of-the-mill V8, but with a little more sparkle. We put in a new camshaft and two-barrel carb, freed-up the induction system, and opened out the exhaust side. Suddenly we had a good performing production engine."

The improvements didn't stop there. In 1983 the 5.0 litre went to a four-barrel carburettor; 1985 saw exhaust extractors, 1986 the addition of Ford's EEC-IV electronic fuel injection, the same computer controlled system employed in the Australian Falcon. In 1987 a better breathing package was engineered.

David Hagen, Ford's engine division manager in the USA, claims the 5.0 litre HO is the most reliable, durable large displacement production engine in the world. Ford executives confirm the engine, made at the huge Cleveland factory, has the lowest warranty claims of any powerplant the company makes.