We pit Australia’s greatest muscle icon, the GT HO, against today’s cheapy XR6. On strip. On track. The results? You better sit down for this…

Standing by the pit wall, a little white speck rounds the bottom corner of Wakefield Park and begins to wind itself towards me.

This article was originally published in the May 2011 issue of MOTOR.

I can hear the engine sucking in 351 cubic inches of air 50 times a second. The headlights dazzle me every time the car changes gear, the clutch slams home and that bluff nose rises against gravity and all logic one more time.

Now in fourth gear, the white missile blazes past, a wall of mangled air convincing me to take a half-step backwards.

It’s none other than Moffat in nothing less than a Phase III GT HO. Hang on a sec: Moffat? Phase III? What’s going on here? Has Wakefield Park been shipped back in time four decades? 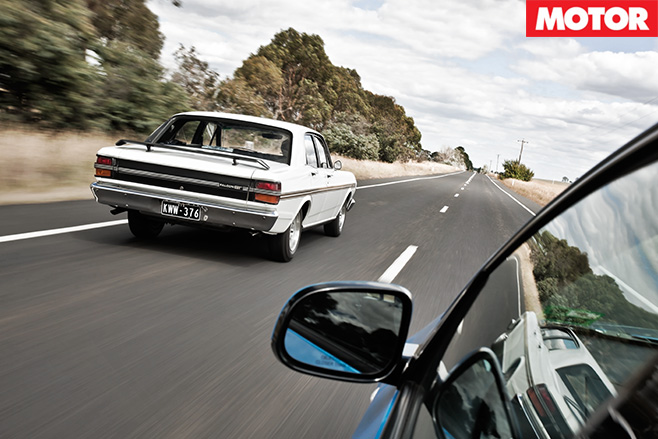 Goulburn’s nightlife says yes, but in fact, the answer is no. And while the car is the dead-set, ridgy-didge original, the Moffat in question is James, son of Allan and a professional race-driver very much in his own right.

Now, see, this is interesting. The Ford Falcon has survived all this time (for now) and a new generation of Moffatry has stepped up to do the hot laps these days. Question is: how far have we really come?

Well, I’m not about to start comparing Moffat The Elder with James The Son, but there are some valid comparisons to be made when it comes to the Falcon package. Specifically, how good was (and is) the GT HO really? And, can a most basic ‘sporting’ Falcon make the most of 40 years of research and development and keep the old girl honest?

I mean, we’re constantly hearing about how good modern cars are; how even a cooking model can knock off the fastest, gruntiest of the old stagers. So how’s about we put it to the test once and for all. 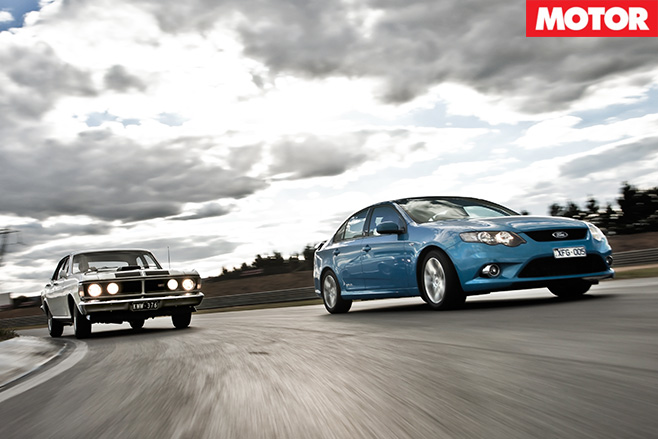 The plan is simple. We take James Moffat and throw him in a genuine, 44,000-mile GT HO Phase III. We send him down a dragstrip and then chuck him on to a race circuit. We record all the data and then we put him through the same tests again, this time in a brand-new FG XR6.

So why an XR6? Well, right now, bent-eight XR8s are on hiatus and the Turbo’s too powerful for fair play. Ditto the blown-V8 FPV gear. But crunch the raw data, and a non-turbo FG makes enticing competition.

The original claim for the GT HO was 224kW and 515Nm, though an army of Hoey-lovers will tell you it actual made more output. Weight? Just 1542kg. That’s a dominant 146kW per tonne. And plenty of scope for the old car to peg back its deficits in chassis and braking technology.

Okay, figuring we’d ease him into things, we let James loose in the new car first up at Sydney Dragway. You know, to get into a groove. And with the user-friendly auto ’box, it wasn’t long before he was cranking out consistent 14.8 second runs with a terminal velocity around the 153km/h mark. This is not bad for something that is a money meter and dome-light away from being hailed at the next corner. 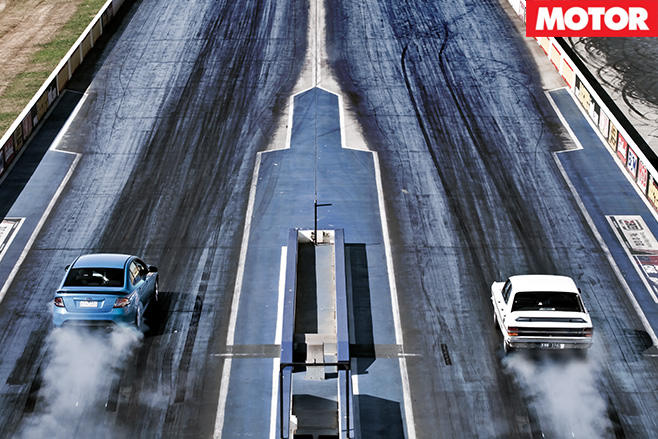 The proviso is that you don’t overcook the launch with wheelspin, but beyond that the FG is super-easy to punch down the strip consistently. But the HO? Erm, it’s not quite so predictable.

The gearshift in the Toploader four-speed feels like you’re setting a bear trap, and refuses to be rushed. The clutch is a bit more forgiving, but the real booby-traps are the 20-year-old Pirelli radials, whose grip on bitumen mirrors Charlie Sheen’s post-lunch hold on reality.

Now, to those who hold that 400m of sticky hotmix is the end of any performance argument, some bad news. Here’s why. The most-powerful car doesn’t always win. In fact, the fastest car doesn’t always win these match-ups either. Ultimately, the car with the best combination of traction, torque, weight transfer and driveability will likely come up trumps in a drag race. And then there are tied results like this one.

See while, nought to 100 in either car comes up in 6.8sec and the quarter-mile in 14.8, it’s just not that simple. The biggest difference on the face of it is the terminal speed, with the old girl shading the FG by a couple of kays. Given that they both blitz 100km/h in the same time – suggesting a decent hook up in both cases – what’s going on with the Phase III’s extra terminal speed? 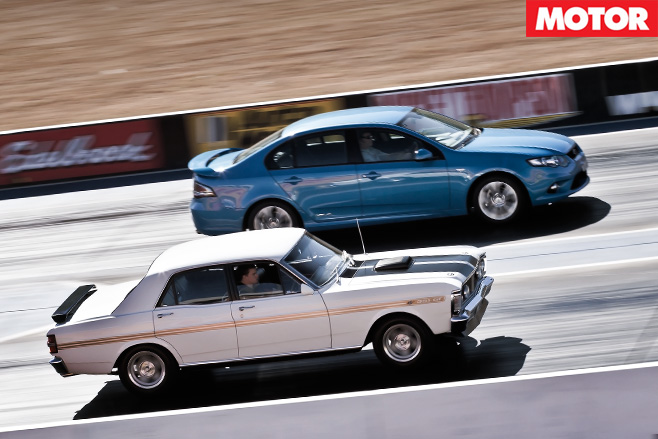 This all remains a mystery to us until we decide to do a couple of side-by-side passes for the photographer. From inside the FG, it soon becomes pretty apparent that the only thing keeping the FG in the race is the slushbox’s snappier gear-changes. Running down the strip next to the HO, I can easily see the old girl surging ahead right through to redline in each gear … and then slumping back to level-pegging the FG as Moff loses a valuable half-second or so to the grumpy Toploader.

It’s the same every gear. The Phase III pulls out half-a-car length and then surrenders it during the inevitable, clumsy gearchange.

You can feel the FG has nothing like the Phase III’s grunt. It’s as plain as day on the drive from Sydney down to Goulburn’s Wakefield Park.

Cars like the GT HO were, of course, designed as homologation specials. And, therefore, they were designed to do one thing; win races. So if the HO was going to shine in this contest, it’d be at the track, right?

Erm, maybe, but let’s also bear in mind those late-Jurassic Pirellis and the fact that braking was never really a HO long suit, even in its day. 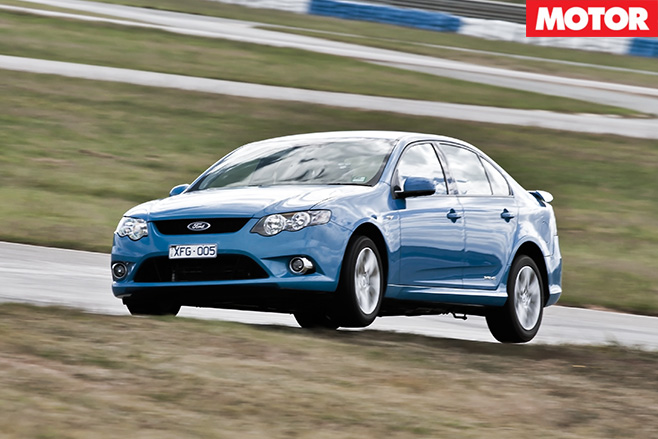 And Wakefield Park isn’t Bathurst. Far from it. In fact, Wakefield was a paddock full of sheep when the Phase III was doing its thing in the early ’70s. That said, our experience with most late-model Falcons is that they’re not exactly over-braked, either, and a couple of quick laps is usually enough to have them go weak at the middle pedal. Which is exactly what James experienced in the XR6 two laps into proceedings.

“One hot lap and the brakes were just going away,” Moffat reckons. But he was a bit more complimentary about the rest of the FG package, especially considering it’s hardly the high-performance version.

“For a standard car, it holds the track quite well. But it lacks the punch of a V8.” Indeed. After a few cool-down laps punctuated by hotties, James eventually laid down a best of 1:15sec.

Then it was time for the GT HO to show its pedigree. And it was perhaps here that the four-decades separating the pair was most obvious. There’s just no way the XY could hope to stick with the newer car. The problem? The overall lack of grip, braking and power-down was just too much for the old girl’s superior stomp to overcome. 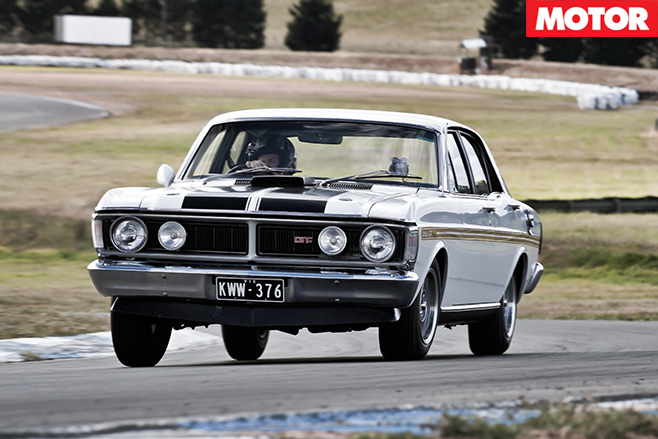 James was up-front: “It falls down in braking, just for a start, and in power-down. It moves around a whole lot more than anything else I’ve driven on a track. It’s just a job to hold on to it at all; you’re moving around in the seat with nothing to hold on to but that skinny steering wheel. And once you lock those rear drums, they don’t want to unlock”.

Even a couple of laps at a moderate pace showed up the lack of any sort of grip, the recalcitrant gearshift and steering that loaded up enormously the closer you got to an apex. We’re with you James: how anybody raced these buggers is a mystery worthy of Miss Marple.

With all that in mind, then, nobody was too surprised to see the Phase III seven seconds adrift of the FG, though at least two of those seconds would be down to those tyres.

You could see the deficit in the data. The FG’s v-max during the lap was 161.8km/h, while the GT HO, even with its superior squirt, just wasn’t exiting the corners with as much pace, recording a peak of 154.4km/h. 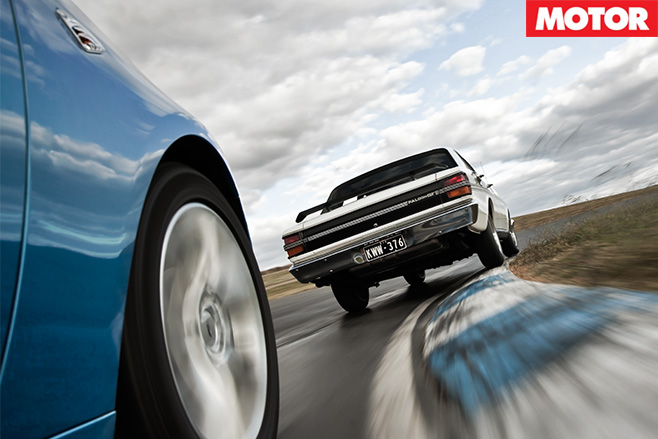 In faster corners – Turn 7, for instance – the FG was holding on to 106.6km/h while the HO was being throttled back to 95.2km/h, just to keep it on the blacktop. The picture in slow corners was no better with the FG tackling the Turn 6 ‘fish-hook’ at 59.5km/h while the GT HO wobbling through at just on 54km/h.

So, how far have we come in 40 years? A certain distance, to be sure, but maybe not as far as you might have thought in some areas.

And in any case, you can throw all the numbers in the world right into the nearest skip when it comes to the emotional attraction of both cars, because I sure as hell know which one I’d have rather gone home with (and it ain’t blue in colour).

And the Moffat motor-racing dynasty forty years on? Set to go from strength to strength, by the look of things.

Numbers down the strip