Meet the man who owns Goodwood

He’s England’s petrolhead duke who throws open the doors and driveway to the iconic Goodwood estate each July. Tip your hat to the man who just loves to see cars cop a royal flogging.

You might have been to this guy’s house. Over the past 25 years, four million tickets have been sold for the Goodwood Festival of Speed. Allowing for those who come every year, at least half a million people have wandered through the parkland around Goodwood House on the south coast of England over the four July days on which it hosts the Festival. 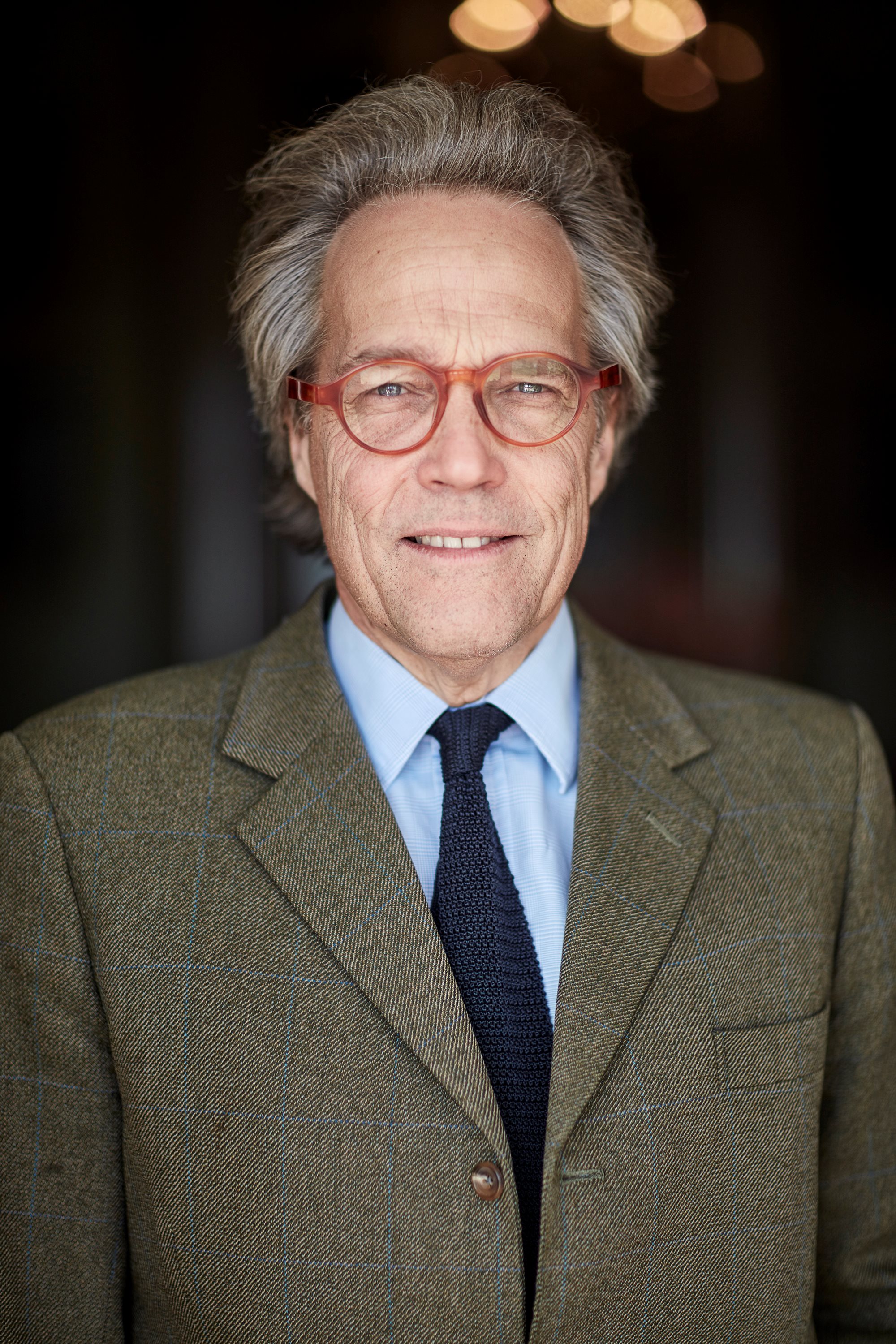 Charles Gordon-Lennox, 11th Duke of Richmond, started the Festival in 1993 on what is essentially his driveway. It was joined by the Revival in 1998 and the Members’ Meeting in 2014. Together, these three annual events have become as central to motorsport culture as the great races and rallies they celebrate. They outrank the British Grand Prix on the bucket list of Australian or American motorsport fans making a pilgrimage to Europe, and maybe Monaco and Le Mans too. 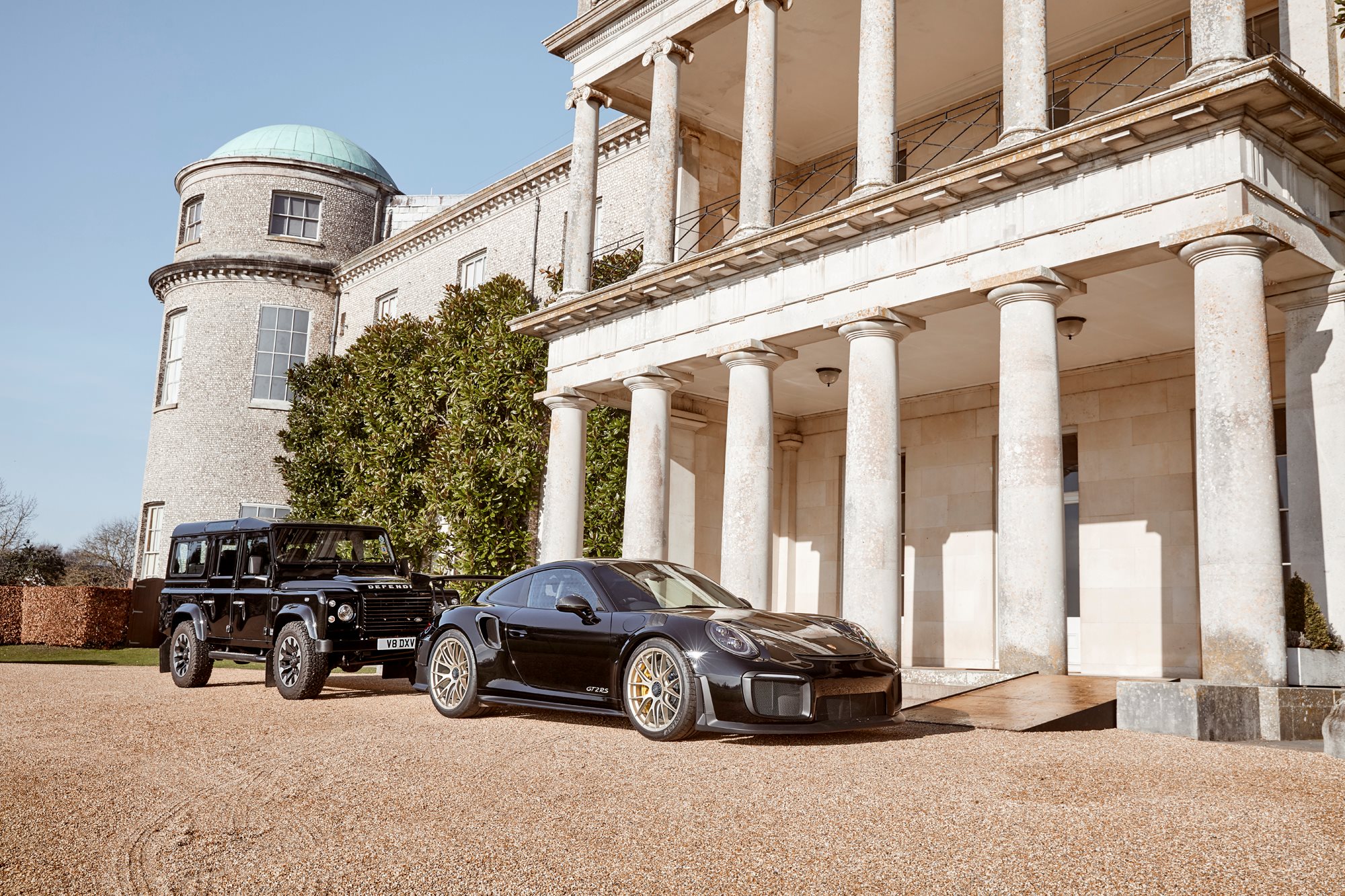 If that’s your only experience of this place, you’d be forgiven for thinking that it’s a permanent motorsport theme park, so vast and varied are its structures and entertainments. For the three weeks it takes to construct, the Festival is the world’s largest greenfield construction site, and once completed it draws enough electricity to power the nearby city of Chichester. 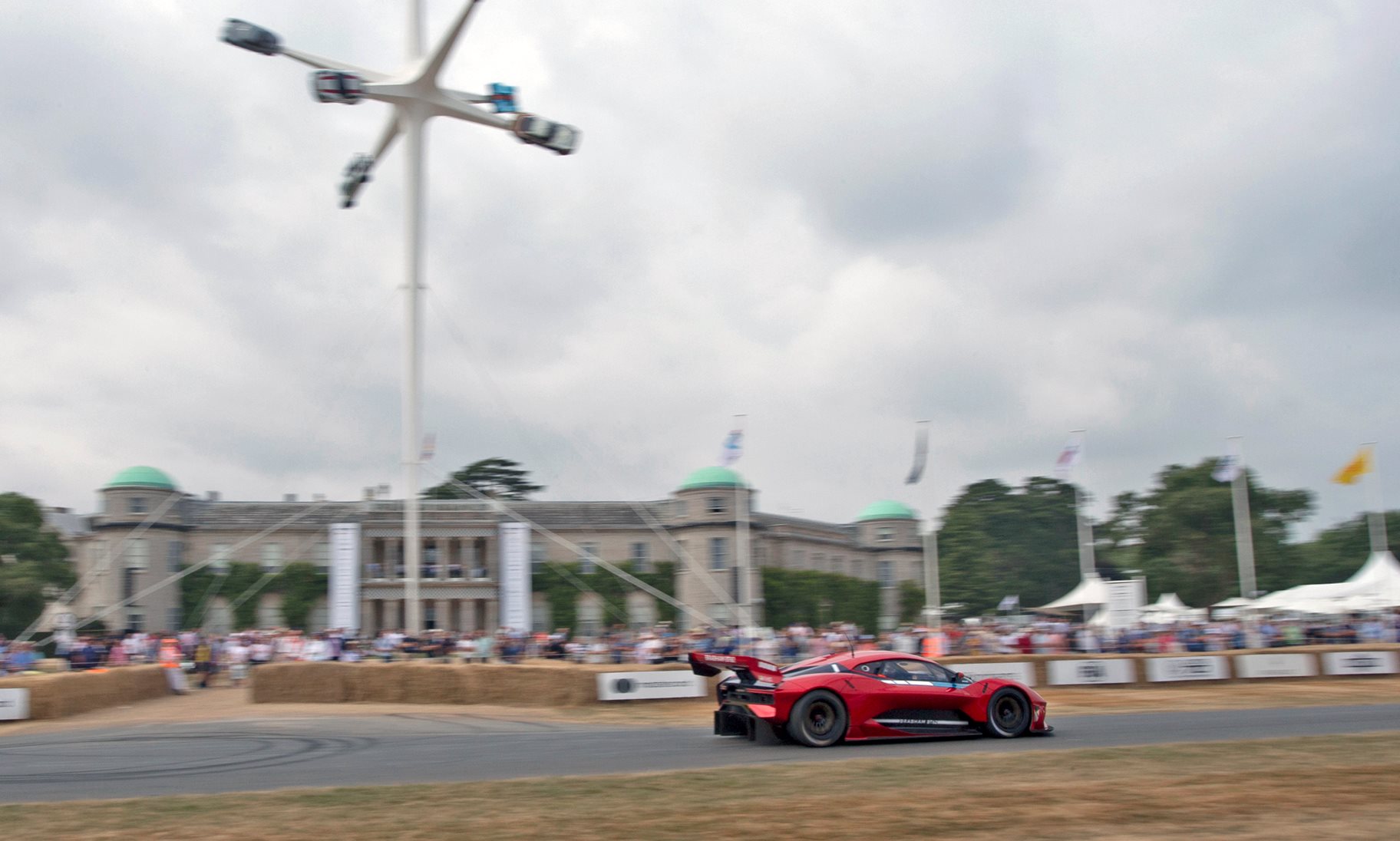 The house itself is dwarfed by it all, flanked by colossal video screens and towered over by one of Gerry Judah’s 100-tonne, 150-foot, am-I-actually-seeing-that automotive aerial sculptures.

But visit at any other time and there’s weirdly little evidence that the Festival happens at all. The front door is opened by the steward (you don’t need to knock) and I’m shown through the grand entrance hall and up a sweeping staircase to the working part of the house, through an antechamber occupied by the Duke’s three personal assistants and into his private office, where Monty the butler is preparing coffee. 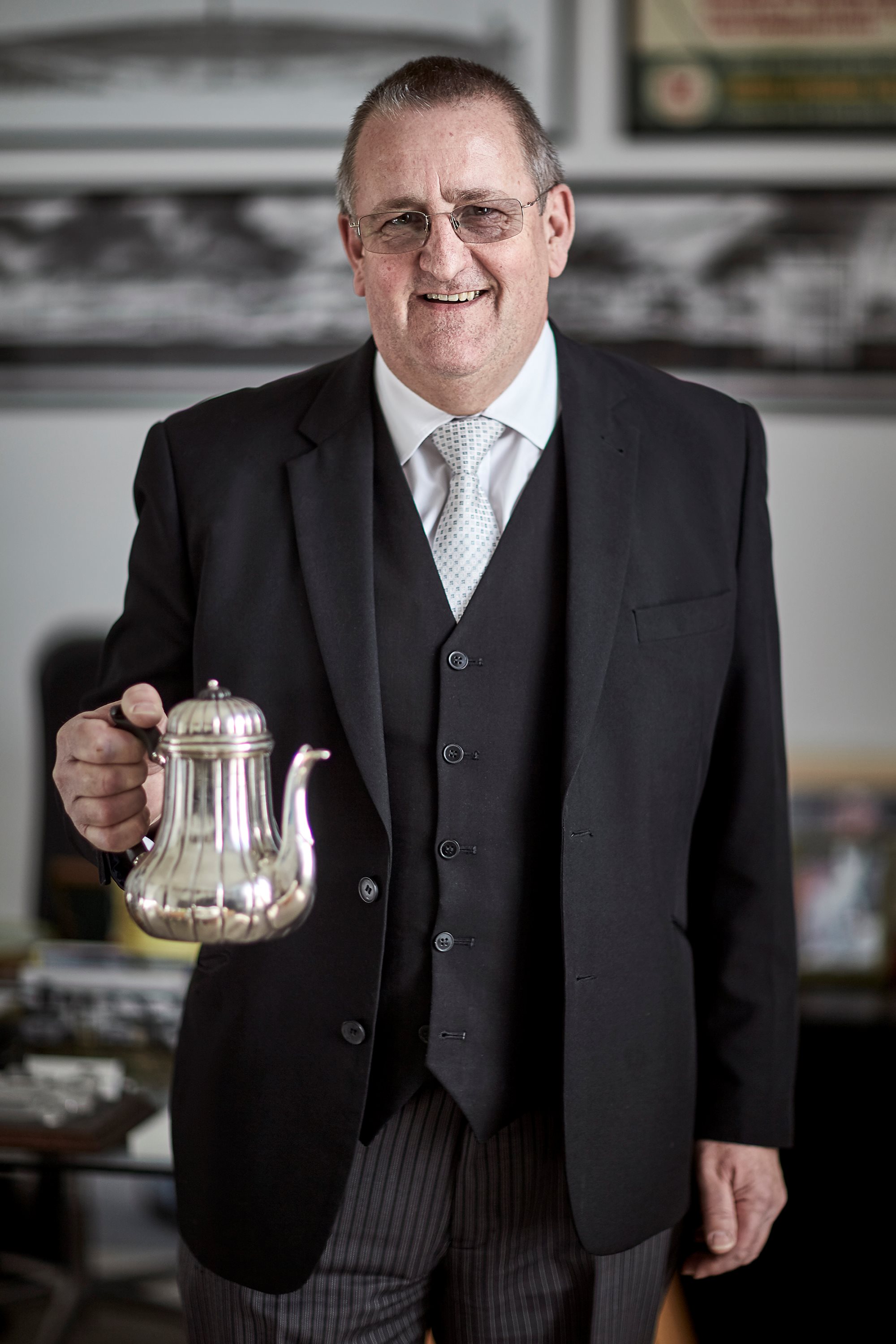 Before His Grace joins us, I have a nose around his extraordinary Duke-cave. A quarter-century of hosting the greatest cars and drivers in motorsport makes for good memorabilia. There’s a gigantic Betty Boop cardboard standee, one of Dick ‘The King’ Petty’s feathered stetsons in a glass case, countless steering wheels and helmets and awards, and a large glass desk which has been completely occupied by model cars. I suggest to Monty that it must be a nightmare to dust. “A lady comes in once a week,” he confides. “She knows to put it all back in exactly the same place. He’d notice otherwise.”

Since 1993 and the first Festival, his boss has been the world’s motorsport fairy godfather. He was then plain Lord March. He inherited the dukedom on the death of his father in 2017. That first Festival was pleasingly amateurish – Charles was up a ladder painting the bridge over the drive as the first cars started to arrive. “We hoped for 2000 people. In the end I think we had 20,000 people here in that first year. But we’ll never really know because most of them broke in.” 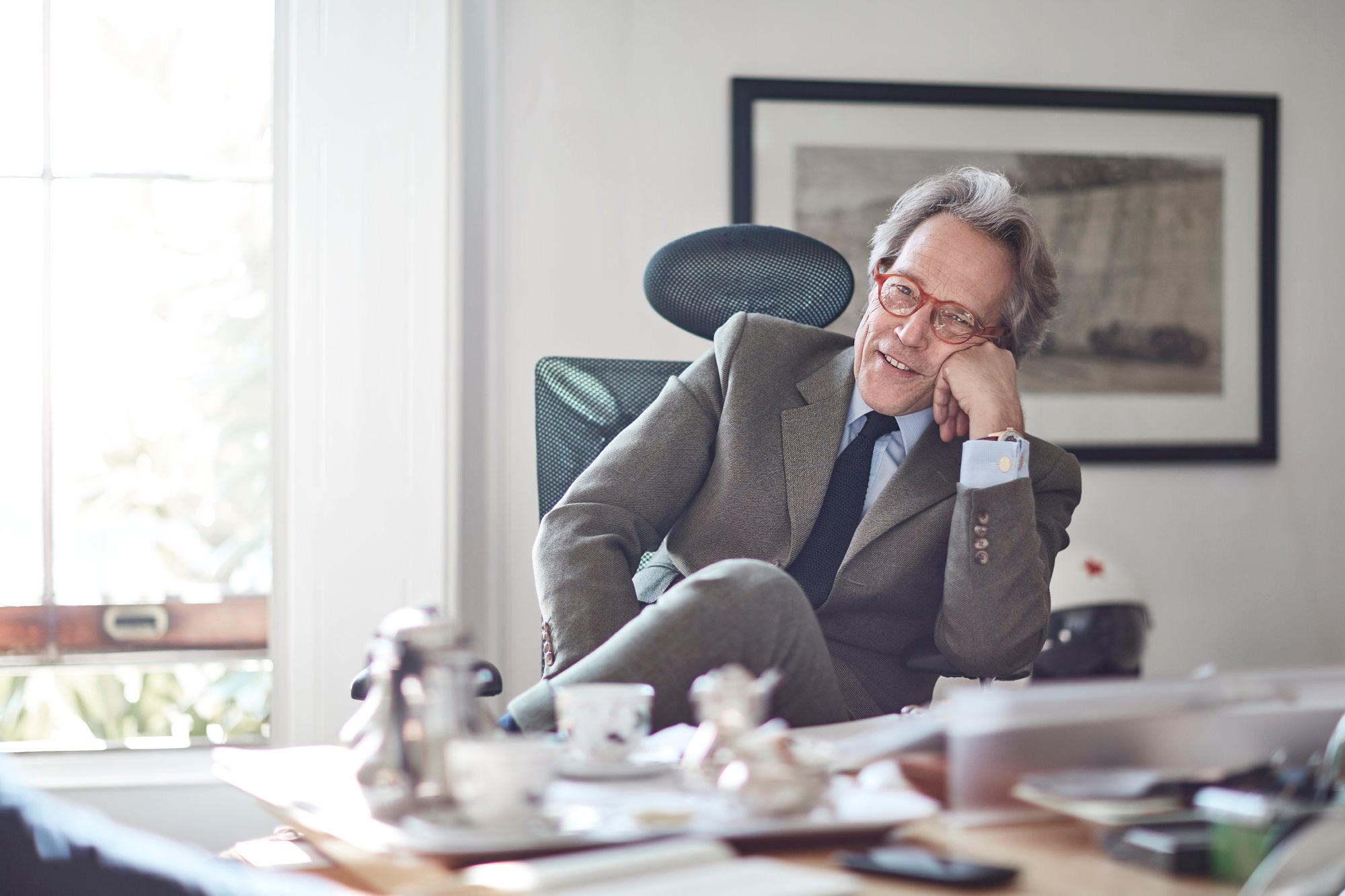 Charles was rebooting what his grandfather started: the perimeter road of the wartime airfield on the estate was a racetrack from 1948 to 1966. “Maybe the best thing that could have happened was that my grandfather shut the circuit in ’66. I was very upset about that as a small boy. But if he hadn’t, maybe it would now just be another circuit. The Festival of Speed isn’t at the circuit, I know. But it still carries that Goodwood spirit, which we felt was kind of in the air. Everyone had forgotten. At the outset I wondered if Goodwood still meant anything to anybody. All I’ve done is put it back together, in a way.” 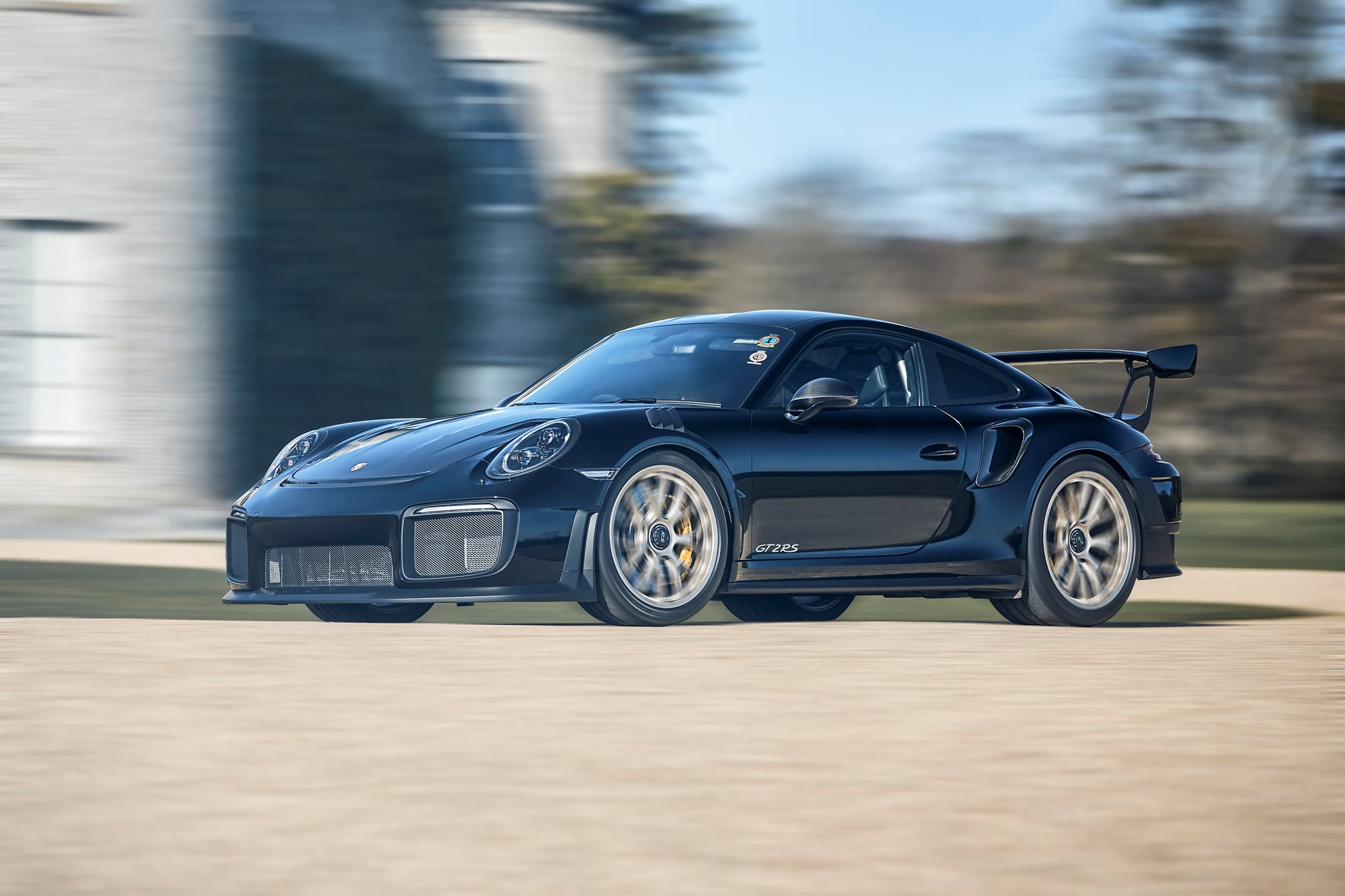 Not only has the Festival grown to become a great motorsport event in its own right, but it has also become important to the global car industry as a place to launch and show new models. When Porsche launched the GT2 RS during the Festival in 2017, the first that the assembled global media saw of it was when Mark Webber ripped past them in one, deep into three figures down the pit straight at the circuit. You can’t do that in an exhibition hall.

For a man entitled to wear a coronet, the Duke is remarkably modest about the scale and significance of what he has built. “I don’t do a bloody thing,” he says. “I just sit here and drink lots of cups of tea.” This is untrue. He is intimately involved in every aspect of these events. He once told me how many lightbulbs illuminate the row of street-food stalls in the hangar at the Members’ Meeting.

I wonder if his title impresses CEOs and billionaire collectors, and opens doors – garage and otherwise – which might otherwise stay shut? “I think, on the whole, it might mean they think twice about not replying. So in that sense it might help a bit. But I still get plenty of people who never bloody write back.” 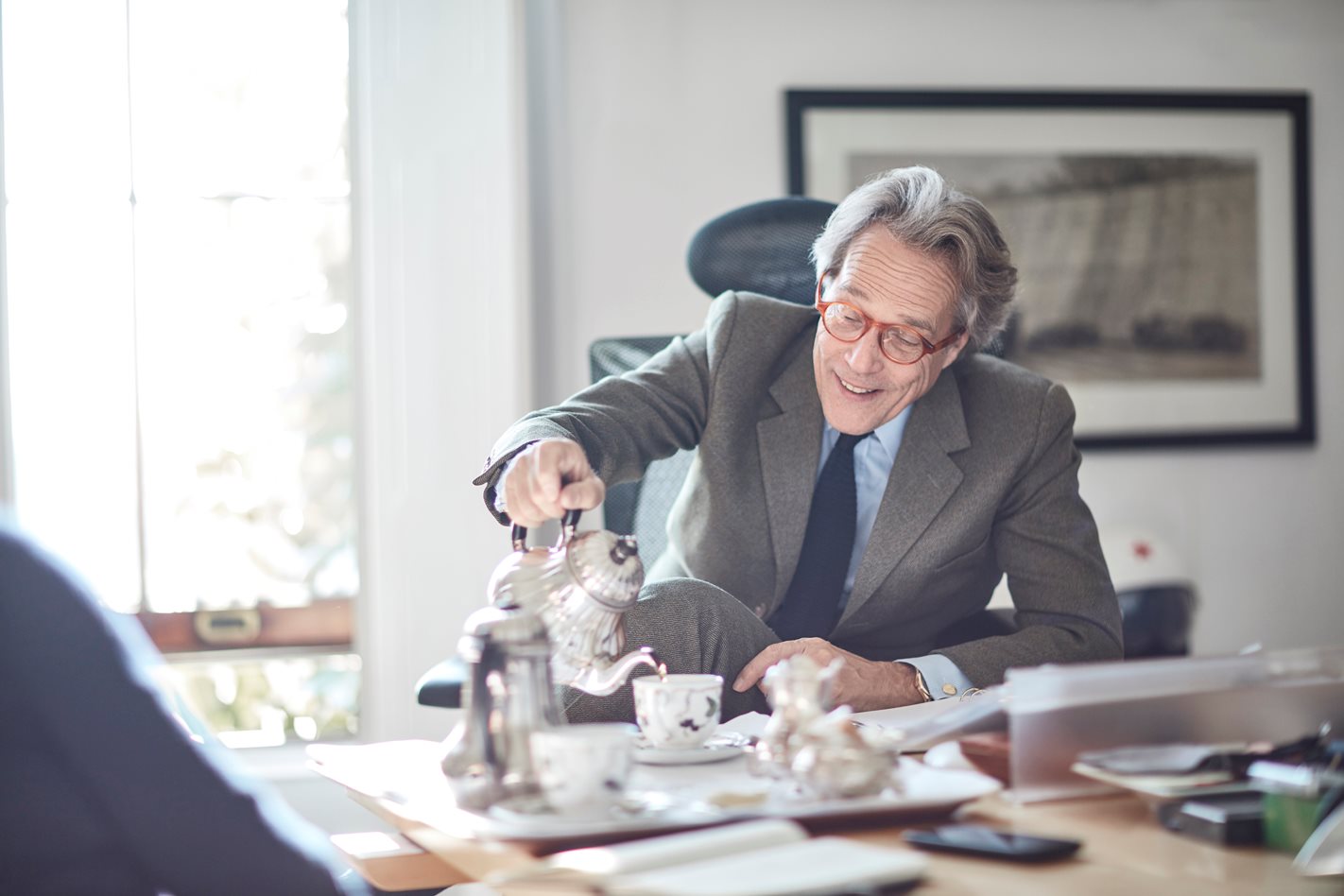 He’s not media-shy. You’ll have read interviews with him before, but they often focus on the events and the estate, and on the cars and drivers he has hosted. I want to ask about him: where his love of cars comes from, how deep it runs, and what shitboxes it found expression in before Porsche started sending 917s to his house for him to drive.

“If you really want to know where all this began, it was with this,” he says, reaching from his desk to the shelves crammed with motoring books. This one is kept in easy reach: The Automobile Book from 1962, by Ralph Stein. “Here’s my name: C. H. Settrington, as I was at the time. I fell in love with these pictures. I’m a firm believer that if you want something enough you can get it. And they’ve all been here, these cars: every single bloody one, really. And a hell of a lot of them I’ve driven.”

And it turns out the very first Festival of Speed featured only Charles and his go-kart. “I first drove just down there,” he says, motioning from the office window to the drive below. “I terrorised everyone. I’d set off from the stableyard and go up the hill. I’d fly off all the time. The kart used to blow up constantly and I’d have to go up to London to get piston rings for it.

“Then when I was 16 I bought a Morgan three-wheeler for 200 quid. It was a pile of junk but I was mobile, until the back wheel fell off.

“Then I had the gorgeous Datsun Cherry. I put cosmic wheels on it and painted all the wheel centres blue. I had it when I was working with Stanley Kubrick as a photographer, so I was roaring around the country in it.

“After that I went to Africa for a year, and when I came back, rather to my horror my father had given the car to the cook. He didn’t really believe in possessions. It didn’t occur to him that it was important to me. She’d spilled a churn of milk in the back and the smell was so bad I couldn’t have it back.”

There followed a Mini Cooper on Webers, an Austin-Healey MkIII and then “some pretty average road cars”.

“And then I made my first bit of money (he had successful careers in photography and advertising before taking over the estate). I saw this used Ferrari Lusso for sale. It was absolutely stunning, silver with the light blue interior. It was £21,000 (A$42,000) in 1980, and I went all the way north to Yorkshire to see it. And that was my first mistake.”

And why was that a mistake?

“Because I didn’t buy it! I was always a bit of a Porsche fan anyway, so instead I got a 924 Carrera GT. They were only made in ’81. I ran it on the road for 10 years before I blew it up at Silverstone. I did my world record run from Goodwood to London in that. I’ll tell you what the time was, but you can’t print it.”

With most of the world’s carmakers as clients, the Duke is more guarded about his current choice of daily driver, but is happy to own up to the two cars parked outside: that 911 GT2 RS, and a V8 Defender. We leave the cups to Monty and walk down to poke around them. “They launched the GT2 RS here and I said to Porsche I ought to buy one as it’s now a Goodwood car. Then they actually called me up to confirm the sale, so I thought I’d better do it. We mainly use it on the track here. 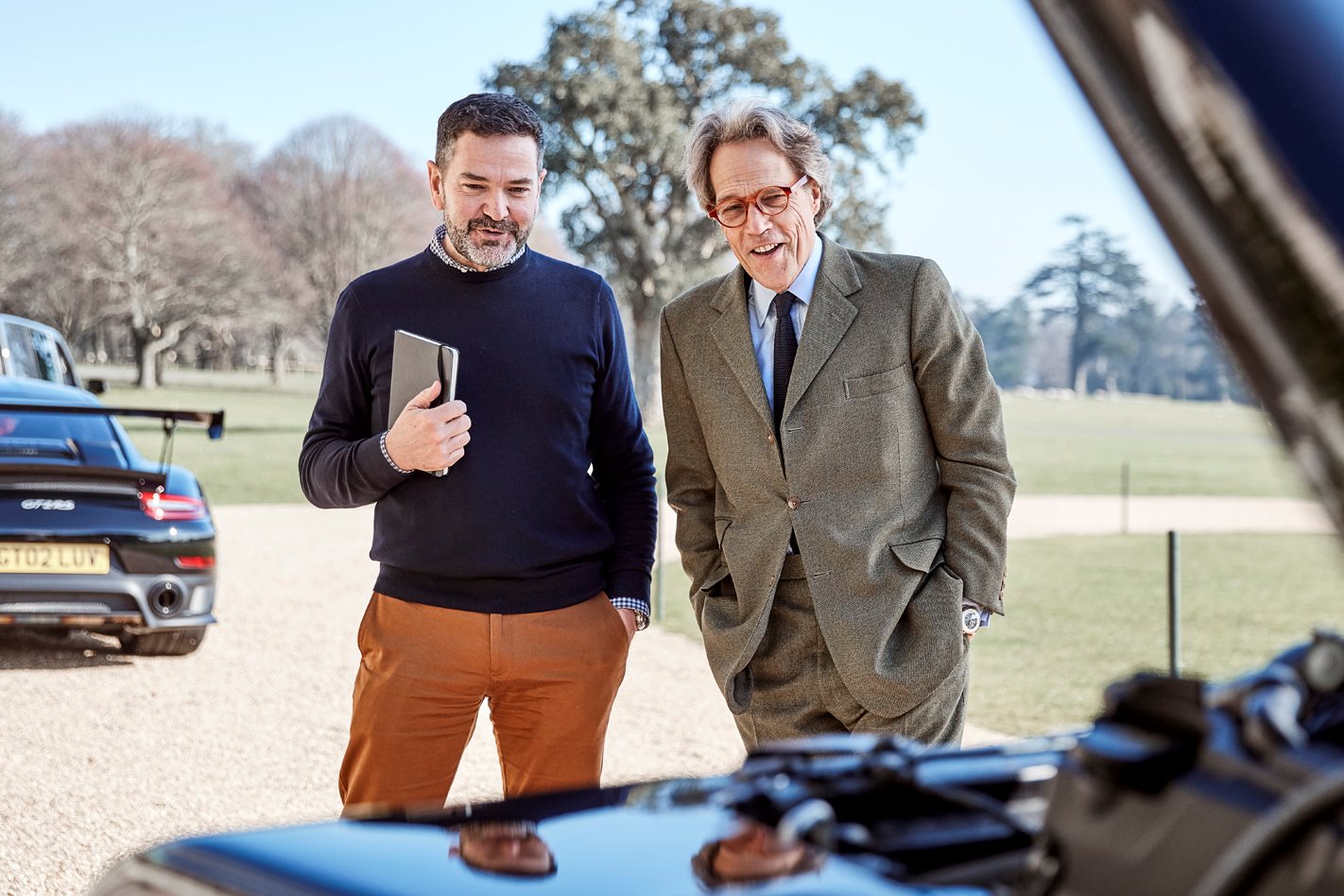 “With the Defender, we heard they were doing a V8, so we had to have one. It’s great fun on shoots. It’s actually number one of 150. I didn’t know they were giving me the first one until it arrived.”

We only have time to drive one before lunch. I pick the Land Rover, reasoning that no experience will ever out-English being driven up the drive of his stately home by a duke in a V8 Defender. Our progress is anything but stately. Charles drives like he owns the road, which of course he does. This is the same stretch on which he first blew piston rings in his go-kart and he hustles the Defender with the same enthusiasm, making the off-road rubber squirm and squeal with every turn of the wheel and stamp of the brake. The Duke is chuckling as he drives, genuinely engrossed and delighted. “It’s not slow, is it? And it actually goes round corners and stops pretty well. Have you driven one? No? Oh you’ve GOT to have a go. Let’s swap.” 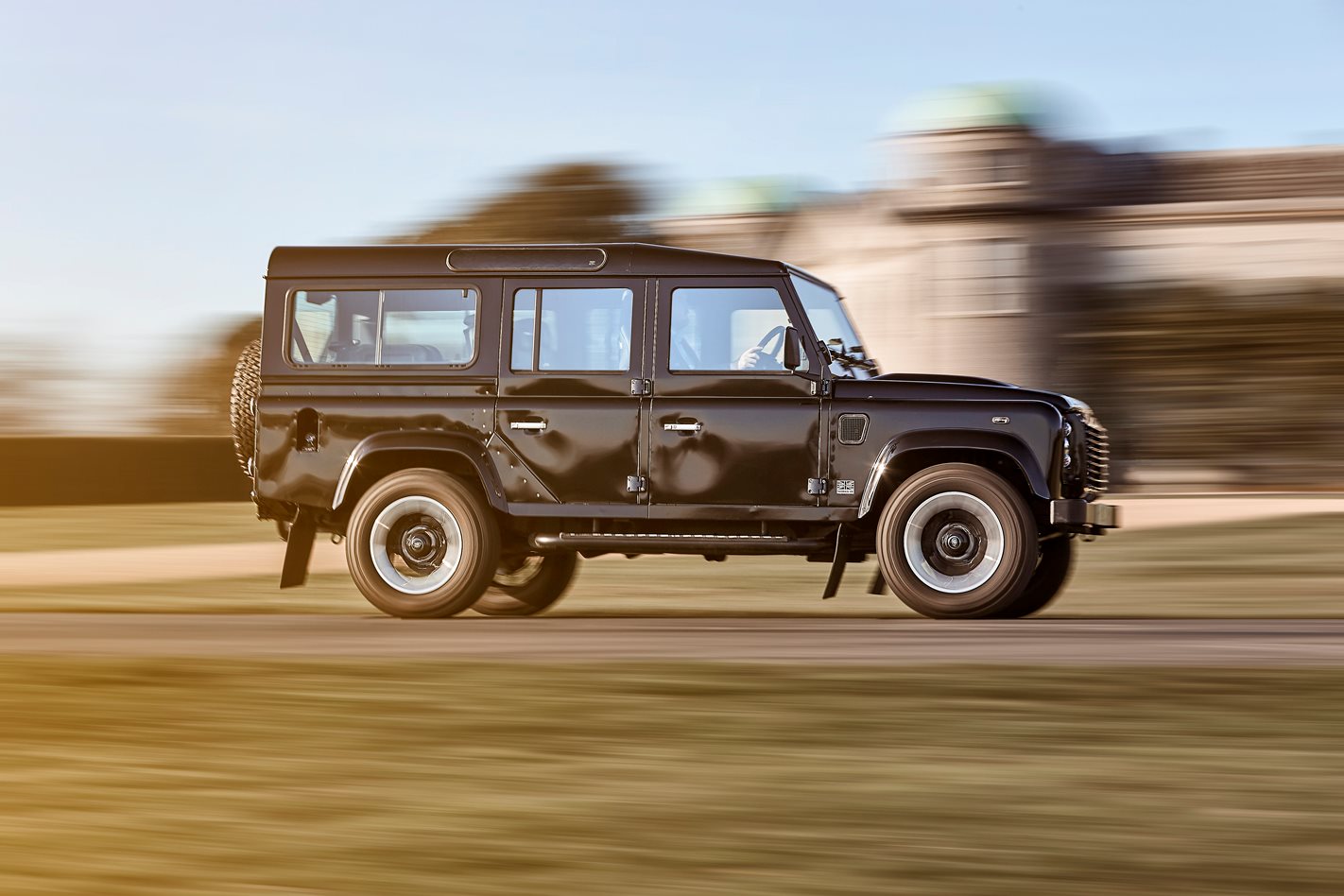 Mucking around with cars like this, there’s a sense of fun and mischief about him which you wouldn’t expect of a 64-year-old duke. But he is a duke, and for all its sharp branding and modern marketing appeal, Goodwood remains one of England’s great, traditional ducal estates. One man is in charge, and his staff sit a little straighter in their seats as he passes.

His job is simply to pass “this place”, as he refers to it, to his son in better condition than that in which he inherited it. There’s an unwritten rule that these estates are passed on to the heir at the age of 40. The current Duke is so indelibly associated with Goodwood’s motorsport renaissance that the idea of anyone else at the wheel is worrying. But Charles’ son Charlie – all Dukes of Richmond have been Charles since Charles II illegitimately sired the first in 1672 – plainly has some petrol in that blue blood. “He is 24, and ultimately he’ll be responsible for the whole estate. Fortunately he’s very keen on his cars. He’s raced at Revival and can take a NASCAR up the hill now. He’s really confident.”

We might be in safe hands. But how much longer do we have this Charles for?

“There’s a 15-year bigger gap between Charlie and me than there was between me and my father,” he says. “It can be tough. I’m rather dreading it,” – you know he isn’t – “but you’ve probably got me for another 10 years.”