If your first answer is, not reading Wheels magazine from that month – specifically pages 10 and 11 – you may have never learned about the best Japanese V12 that never was: the one destined to power a flagship sedan badged Amati, and aimed to go head-to-head with the best from BMW, Mercedes, Lexus and Cadillac.

Amati was the highly ambitious plan to take Mazda – a small, independent car company determined to punch well above its weight – into the premium segment.

The project was codenamed Pegasus, headed by up Dick Colliver, a 20-year Mazda veteran. It was officially announced to the world at an August 1991 press conference, with Mazda claiming it would launch its bold new premium-segment contenders in the first quarter of 1994. 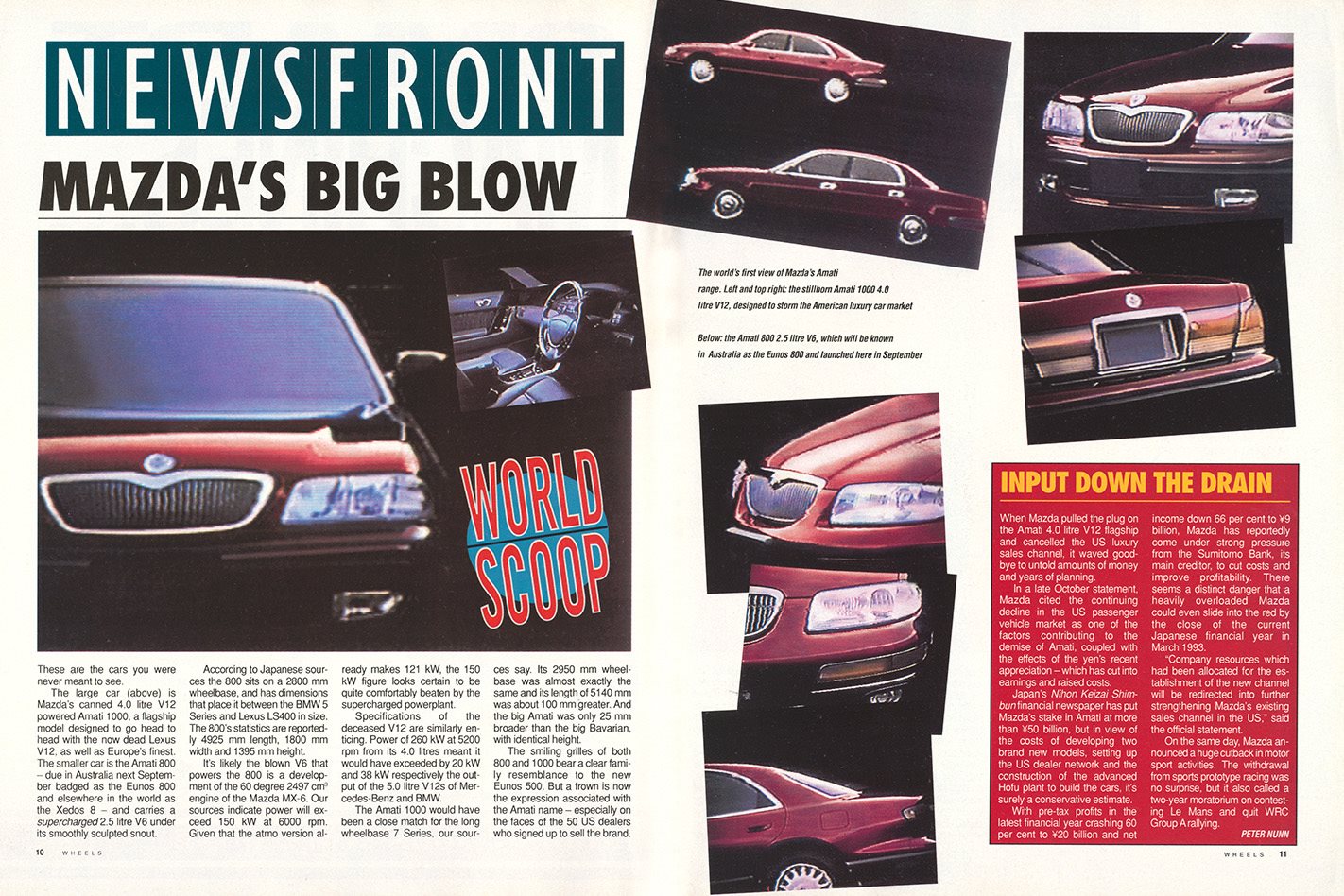 The division was going to be headquartered at Mazda North American Operations in Irvine, California, and unlike its rivals, Mazda planned to sell the vehicles within its existing dealerships.

It was a bold, brilliant plan – right up until the Japanese yen imploded, the financial bubble burst, and the whole program tumbled like a near-finished high-rise tower razed with demolition dynamite.

The flagship V12-powered model from the new premium brand was to be called the Amati 1000, and the car itself was clearly aimed to be a similarly luxo but better-value alternative to a long-wheelbase E32-generation BMW 7 Series, as its 2950mm wheelbase was almost the same, and its overall length of 5140mm about 100mm longer. The Amati was actually 25mm wider than the big Bavarian, with identical height.

Read next: The best engine manufacturer you’ve never heard of

Only a select number of Mazda employees directly involved with the Amati program at the time have ever laid eyes on the 1000.

There are no images of it on any Mazda site; no prototypes preserved for corporate prosperity. There are only glimpses of it within brochures printed, but never distributed.

Wheels managed to secure a couple of spy shots a few months after the program was officially cancelled. 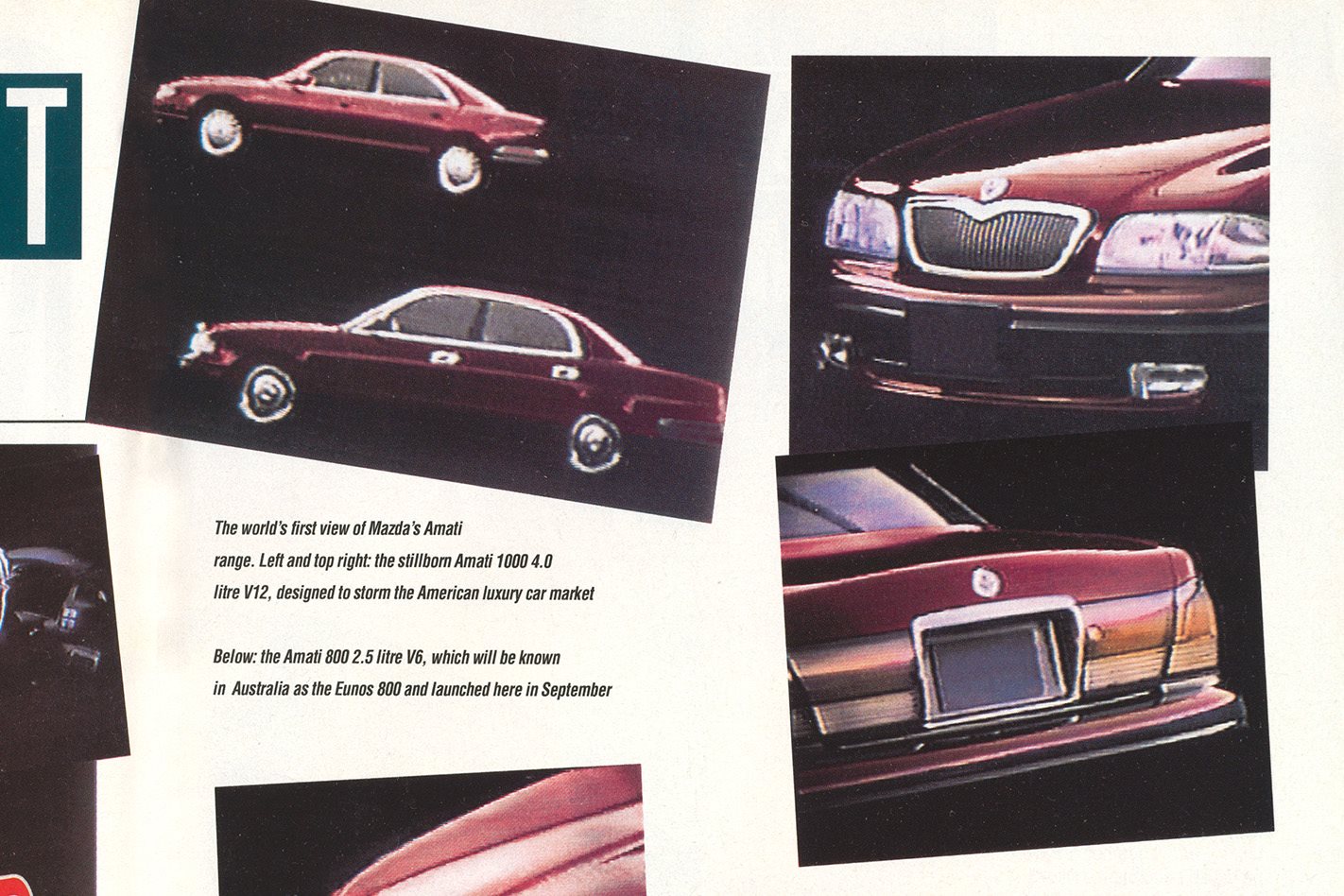 What we know about the V12 itself comes from Bob Hall, a product planner who worked on the program (and who would go on to join Wheels as a journalist later in the ’90s).

Hall explained to Jalopnik in 2018 that, as is so often the way with V-banked engines, this one was created using components sourced from an existing architecture: in this case, Mazda’s V6 program.

The design of the new block drew from mating two K-series V6s end-to-end, and used the rotating assemblies of the K-series engine. Even the valve train was lifted from the V6, according to Hall.

Wheels reported at the time in December 1992 that the V12 was a 4.0-litre unit producing 260kW at 5200rpm, but we now understand that was not accurate. While the block was engineered to be capable of a 5.0-litre displacement, early prototypes were actually 4.6 litres, intended for the North American market, and were officially rated at 209kW, due to the power-cap agreement at the time, but certainly made more.

According to Hall, prototypes of the 1000 were benchmarked against the Lexus LS400, the debut luxo sedan built by Toyota’s then-new premium brand, producing 186kW from its 4.0-litre V8.

Apparently, the Amati 1000 was marginally slower accelerating from 0-100km/h but delivered swifter acceleration in passing manoeuvres from 100-130km/h.

Alas, it was all a huge amount of work and vast amounts of yen that would come to nothing.

Read next: Can rear-drive and six cylinders save the Mazda 6?

In a press conference in October 1992, in a very different economic climate than that in which the whole thing had been conceived, it was announced that the Amati program had been cancelled. From that moment, it was never officially spoken of again.

Mazda's company-sanctioned museum in Hiroshima has no artefacts or mention of the Amati project; nor does the brand’s archive in California.

Despite the passage of over 30 years since the original proposal was green-lit, it’s been often reported that Amati remains an ‘open wound’; one Mazda views as ‘mentsu wo ushinau’ – ‘loss of face’.