It’s a tough time to be a driving enthusiast in Australia. There’s a smorgasbord of fast metal available, but all over the country great driving roads are being neutered as speed limits erode, from 100 to 90km/h, then 80, then 60.

For Sydneysiders the most obvious example is probably the Old Pacific Highway; for Victorians, perhaps Black Spur, though no doubt everyone reading this can name similar examples. Of course, to the world at large enthusiastic driving is about as popular as going to the dentist, so any complaints are destined to be met with blank stares.

However, the problem is two-fold. As speed limits decrease, the capabilities of the cars we’re driving are rapidly heading in the other direction. Modern performance cars are so good that driving them fast on the road is no longer a test of skill. 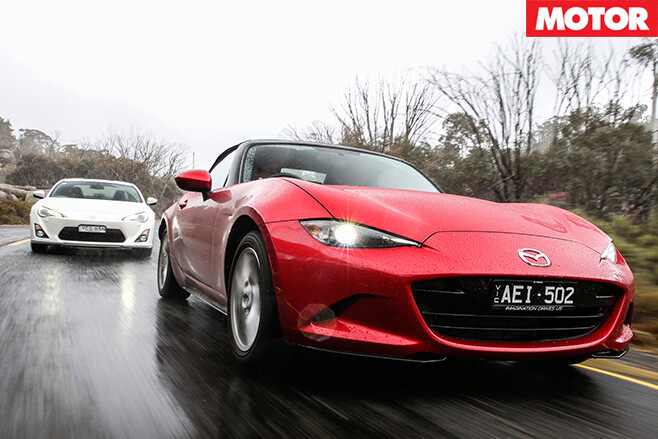 As enthusiasts, we all like feeling a car move around beneath us, but grip levels are now so high that a lot of cars' limits are never even approached unless you abandon common sense – risky behaviour on the open highway. And we’re not talking 911 Turbos and BMW M4s here, even relatively humble machinery like the VW Golf R or Holden Astra VXR is capable of pace that would shame supercars of a decade ago.

Thankfully, there is an antidote. The new Mazda MX-5 and Toyota 86 have such modest outright grip levels that reaching their limits is a piece of cake, and both have sufficiently modest performance that you can frequently use every centimetre of throttle travel and every single rpm without ever reaching triple figures.

But don’t think their lack of speed makes them boring – quite the opposite. You have to work for every ounce of pace, as there isn’t the grip to save you if you misjudge your entry speed, nor is there a fat wad of turbo torque to pull you out of corners should you select the wrong gear. Lazy drivers need not apply. The question is: which is best? Since its introduction in 2012, the Toyota 86 has had the budget rear-drive sportscar market to itself, clocking up thousands of sales to make Australia the world’s third-biggest market. No longer.

Despite Mazda’s slightly baffling assertion that it doesn’t consider the two competitors, its decision to cut the price of the base 1.5-litre MX-5 – the car we’re using for this test – to just $31,990 is a shot across Toyota’s bows. Even the more powerful 2.0-litre-engined car is only $34,490, which puts it almost directly in line with the $35,990 86 GTS.

Simple, the 2.0-litre cars hadn't arrived at the time of this test, but, more importantly, those that have driven both variants say the new MX-5’s fundamental character and behaviour is more or less identical regardless of which engine is fitted. And, as it turns out, despite being a substantial 51kW/55Nm down on its Japanese rival, the new MX-5 is far from disgraced in a straight line.

Overtaking also requires planning, its 3.7sec 80-120km/h time in third gear blowing out to 16.9sec (and the entire length of the drag strip) in sixth. Still, it’s an impressive performance from just 1.5 litres. 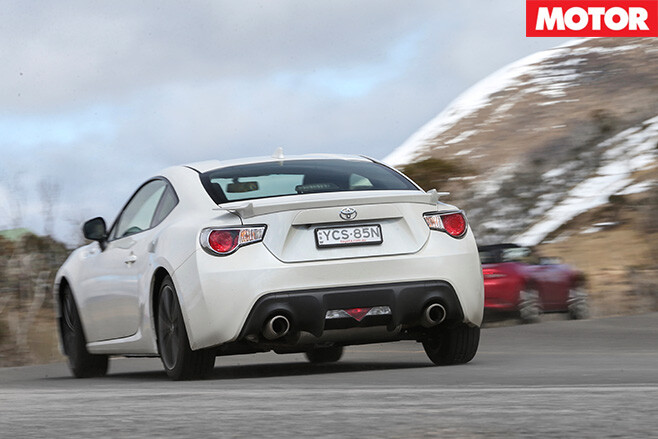 But the 86 is quicker. It feels flat in isolation, but in comparison the Toyota’s 2.0-litre flat-four has noticeably more urge beyond 5000rpm. Unusually, launching the 86 with quite a lot of wheelspin works best, clocking 0-100km/h in 7.15sec, and it extends its advantage slightly over 400m with a 15.1sec quarter at 152.24km/h.

It’s odd how often the 86 is pilloried for being slow, when in reality the numbers tell a different story – Holden VN SS, Mazda FC RX-7, Mitsubishi Galant VR-4, the 86 is as quick as all these past performance heroes.

Part of the problem is that it feels slow; too often you have to rev the ring out of it – basically operate between peak torque at 6400rpm and peak power at 7000rpm – to feel like you’re going anywhere. Attempt to use third and it falls into its non-existent mid-range and you’re left waiting, waiting, waiting for the revs to pick up again. 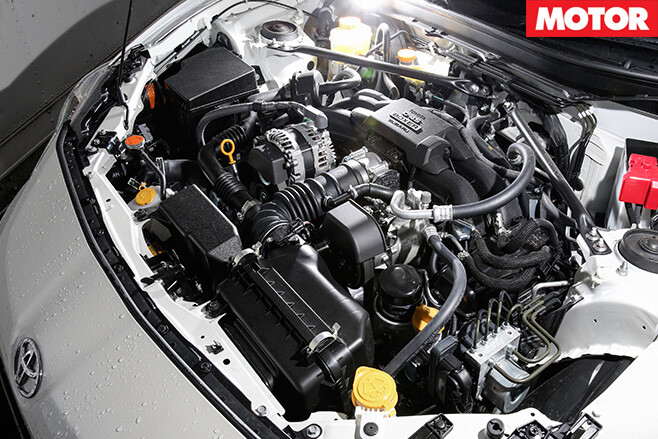 If Toyota was to plan an upgrade for the 86, the engine is the place to start – its 2.0-litre flat-four needs some of the character of the old Renault Sport Clio 2.0-litre, a car that was no faster than the 86 but buzzed and screamed like it was possessed.

As a result, while it trails on the stopwatch, from behind the wheel the MX-5’s 1.5-litre is actually the more enjoyable engine. Its broader spread of power (peak torque is produced at 4800rpm, peak power at 7000rpm) makes third a possibility even out of tighter corners, yet having 7500rpm to play with often saves you the effort of shifting between corners on a winding road.

Not that shifting gear is a particular chore. The six-speed manual is generally light and accurate, though needs a decent shove across the gates, especially on downshifts. I personally prefer the more mechanical shift on the 86, though its six-speed ’box is notchy and obstinate when cold. The great joy of the new MX-5, however, is that because you’re not going very quickly, even at maximum attack, you have more time to concentrate on perfecting your driving. It’s something that takes on even greater importance in the ND MX-5 because its soft set-up exaggerates weight transfer.

As such it’s not a car you throw around with abandon; the smoother you are with your inputs the greater the reward. It’s at its best on twisty roads, where its softness means its limits are easily telegraphed and the skinny 195/50 R16 Yokohama Advans are soon squealing in protest.

Rather than a signal to back off as it might be in heavier, more powerful cars, howling rubber is merely the start of the fun in an MX-5. It’s at this point that ESP must take a back seat, as while it’s extremely well calibrated, with it off you can lean heavily on the front tyres in the first half of the corner before applying plenty of throttle to move the back around. It’s not oversteer per se – there isn’t enough power for that in the dry – more steering the car ever-so-slightly with the accelerator pedal. It’s brilliant fun, and the MX-5’s diminutive size and innate balance allows it to shine on roads that’d feel too small for most modern cars.

Over the same stretch of road the 86 is also impressive, if not quite as enjoyable as the tiny Mazda. It carries a weight disadvantage of 266kg, yet it doesn’t feel anything like that, partly due to the stiffer set-up keeping the weight better controlled.

Because there’s not as much body movement, however, you drive more to the limits of the tyres, which is a bit of a problem, as they aren’t very good. Toyota fits low rolling resistance 215/45 R17 Michelin Primacys to the 86 to make it easier to slide at low speed, which is fine, but the problem is the tyre’s behaviour at the limit. 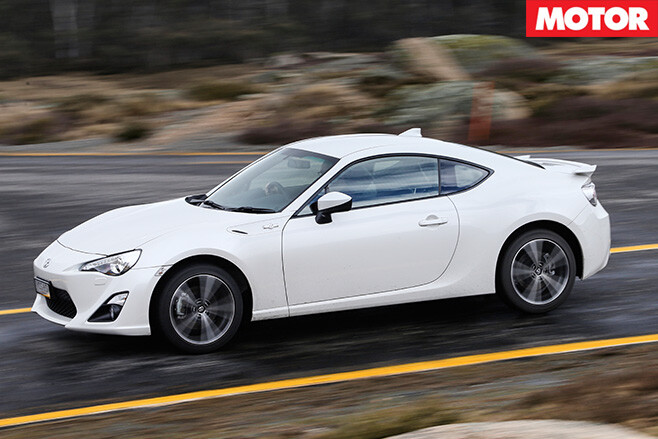 The Primacys particularly suffer under braking, triggering the ABS too early and sapping driver confidence. Likewise, when the tyres do run out of grip they can do so quite suddenly; in theory the 86’s chassis is so good it can be driven everywhere 100 per cent, but in reality you can’t always commit as hard as you’d like. The Mazda’s superior Yokohamas are no impediment to it moving around, so perhaps it’s time for Toyota to modify its philosophy.

To a certain degree this is nit-picking, however, as the 86 is still one of the best driver’s cars around. It sucks you into the process of driving with its sublime steering, communicative chassis and, of course, the fact it wants to wag its tail at the slightest provocation. But the Mazda shows the way in certain areas, namely ESP calibration (the Toyota’s is clumsy and awkward), ultimate balance and, particularly, brake feel.

It’s not quite that simple, though, as it turns out the Mazda shines brightest in quite a select set of circumstances. As the road opens out and speeds increase, the MX-5 begins to feel a little uncomfortable. The soft set-up that allows it to transfer weight so effectively at slow speed results in a slight ‘bob’ at the front in fast, bumpy corners and the steering feels slightly loose, which makes it difficult to judge how much grip is available when there is a small amount of steering lock applied.

The ride is also reactive to poor surfaces, there’s enough road noise to need raised voices to have a conversation (and so little sound deadening you can hear the wipers working) and just as at the drag strip, at higher speeds the little 1.5 starts to struggle, longer inclines requiring a shuffle back to fifth or fourth merely to maintain speed.

Some of these criticisms, particularly those relating to ride and refinement, equally apply to the 86, but it’s also clear that the Toyota offers greater driving thrills on a wider variety of roads, even if it can’t match the Mazda’s dizzying peaks when it’s ‘in the zone’. 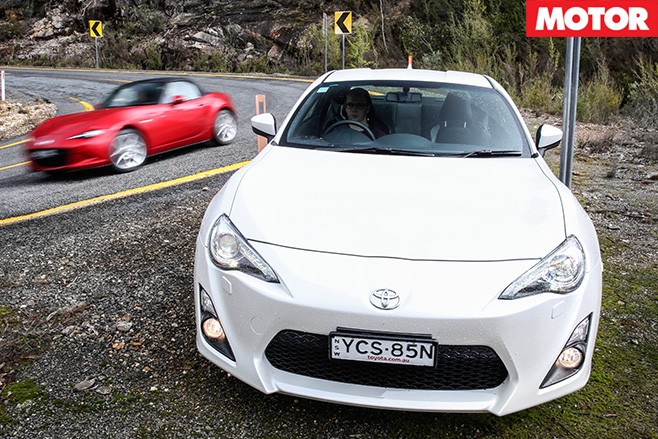 Is it fair to award a comparison result purely based on how the two contenders drive? Well, yes, as that’s the sole reason these cars exist. Two-door sports cars, even those as affordable as this pair, are purely discretionary purchases – no-one is buying these cars for the quality of their interiors, their boot space or their ease of servicing, they’re bought to put a smile on the face on the driver, and it’s the Toyota that does it best.

Whether or not the gruntier MX-5 2.0 can turn the tables remains to be seen, but for the time being, the 86 remains the best cure for the nanny state.