There’s now a high-priced Mercedes-Benz that attracts absolutely no luxury car tax. But it’s not really for the urban driveway.

WHAT IS IT?
The ute-based version of the Mercedes-Benz G-Class Professional 4x4 made for the Australian Army shucks off its camo and pulls on a pair of dungerees.

WHY WE’RE DRIVING IT
After five years of measuring the appetite of the Aussie market, Mercedes-Benz believes there’s now enough commercial interest out there to start bringing in small numbers of the G300 G-Professional, as the ute is known, into Australia.

THE WHEELS VERDICT
An acquired taste, but one that will get you places few others will.
PLUS: Off-road ability; plenty of product support via army contract; guaranteed to be rare; no luxury car tax
MINUS: Sucks in city driving; $120K and you don’t even get heated seats for free

THE WHEELS REVIEW
DON’T like paying Luxury Car Tax? Didn’t think so. Well, Mercedes-Benz has found a solution via a hand-built $120,000 two-seater. 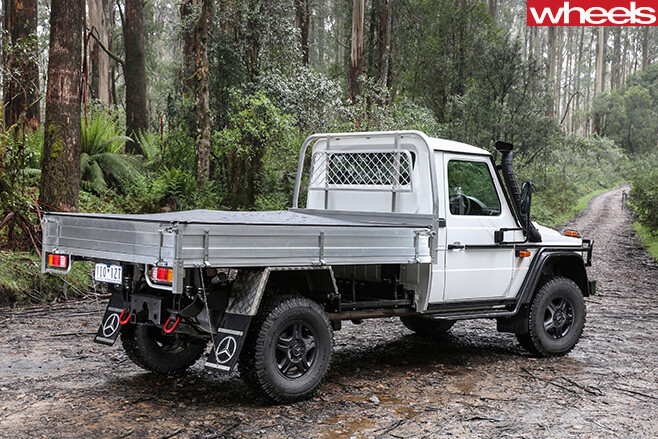 It’s no sports car. Instead, because it is classed as a commercial vehicle and not a tax-magnet passenger car, not only does it repel LCT – that nasty hip-pocket slug that somehow doesn’t extend to other luxury goods including motor yachts, champagne and polo ponies – it can also go places that almost no other cars will dare.

The problem is that it is a bare-boned trade ute. The $119,900 Mercedes-Benz G300 G-Professional, as it is known, is a slightly hosed-down, civilian-suited version of the G-Wagen that will shift the Australian Army and its materiel around for the next quarter century or so.

How bare-boned? Despite costing the same as a Mercedes-AMG C43, the G300’s two very flat seats are vinyl and only row back and forth, and there are drain plugs in the floor so you can hose the interior out. There are only two airbags, there’s a pair of 12-volt batteries supplying 24V if you need it, and its aftermarket Alpine stereo system – included because key buyers wanted music and Bluetooth – has only one speaker. The windows are the old-fashioned hand-wound kind, and the doors need a decent slam to shut properly. You don’t even get a tray on the back of the reinforced chassis. But you do get standard air-conditioning, three diff locks, asthmatic power steering and a free bull bar.

Key to the G-Professional’s arrival here is that Australian Army contract to service and supply the G-Wagen; Australia is the only market worldwide, for now, to get the ute. A four-seat wagon, also military-hardened, will join the range mid-way through next year, priced from around $110,000. No one at Merc Australia knows why, despite all the extra seats and metal, it will be cheaper than the ute.

The G-Professional ute is as uncomfortable in the city as it is at home in the most challenging bush settings. Urban car parks become obstacle courses that highlight the G300’s Titanic-scale turning circle. Traffic lights require some foresight to get momentum via the low-cut gearbox and laggy throttle pedal. Meanwhile, an overly sensitive stability control will cut in at the first hint of wheelspin, while a snorkel snaking along the driver’s side A-pillar sucks in lungfuls of air with a loud, eardrum distorting hiss, joined by the whine of the 135kW/400Nm 3.0-litre V6’s turbo spooling up to speed. A centre armrest, made to house a third 12-volt battery if you need it, feels as though it is cast from iron the first time your elbow hits it. 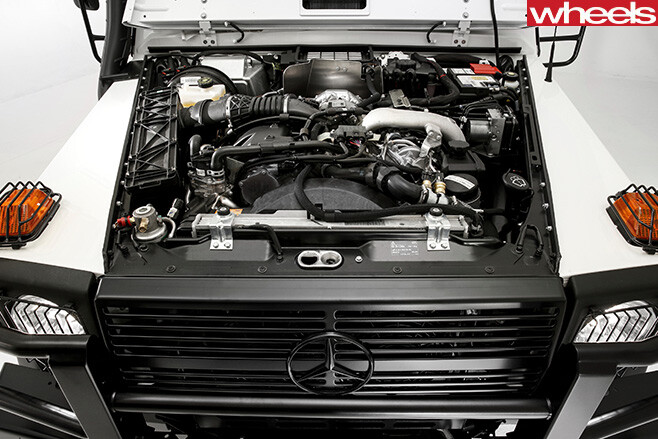 The slow, heavy steering wheel takes an eternity to wind on some lock. Changes of direction can’t be made with haste.

Even loping down the road the G-Professional needs half a tonne of weight on the tray to make it ride smoother. It’s so tightly sprung that the cab is constantly moving, and the unsupportive seats, optimised for sliding in and out in a hurry with a full pack, don’t help. A short drive leaves you feeling as though you’ve just endured an intensive upper-body workout after a month away from the gym. Yeah, you’ll feel that tomorrow.

Now, before you go all “Well, the G-Professional only tows 2.2 tonnes, and for roughly half the price I can get a LandCruiser 70 Series that will pull 3.5 tonnes”, consider this. Yes, the G-Professional is a towing minnow in the commercial vehicle realm, but it can comfortably carry a 2175kg ’Cruiser on its back, with a few slabs of beer thrown in to bring it up to gross weight. In return, the 1125kg-rated Toyota will struggle with half a G-Professional on its back. And maybe a bottle of sherry. 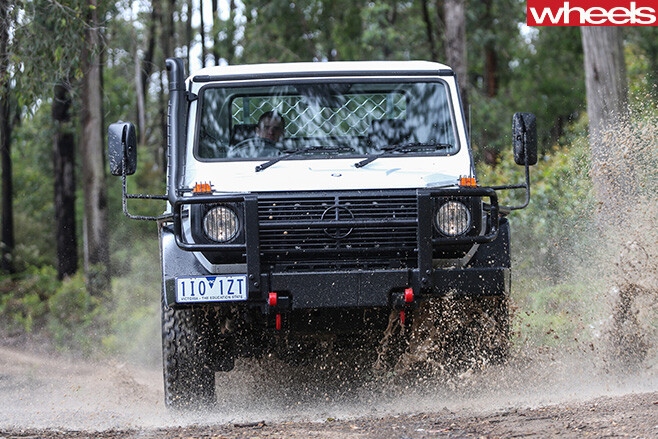 And that alone is why the G-Professional has a life in Australia. Corporations sometimes have a need to carry big loads, not tow them, and via a vehicle aligned with Mercedes-Benz’s Australian Army contract, they have the guaranteed long-term support they need to make the G-Professional a lifetime investment in load-lugging. Benz reckons these utes will stay in the same hands for up to 20 years. It’s already racking up huge orders.

Private buyers like you and me? Mercedes-Benz reckons the G-Professional doesn’t really make sense for us. But who ever thought that buying a car was a rational decision?