Ever had one of those phone calls when you wanted to climb down the line and give the other person a hug? I have.

On the other end on this particular occasion is my mate Tim Kulhanek. Tim happens to be Compliance Manager for Tasmanian car dealer Buckby Motors and he’s just asked if I’d like to drive in the first round of the 2018 Tasmanian Rally Series – if he’d rung and told me I’d won lotto I wouldn’t be any happier.

Buckby Motors has long been a supporter of Tasmanian motorsport, primarily tarmac rallying, its Subaru WRX STI winning Targa Tasmania's GT4 class in 2016 with Steve Glenney at the wheel. 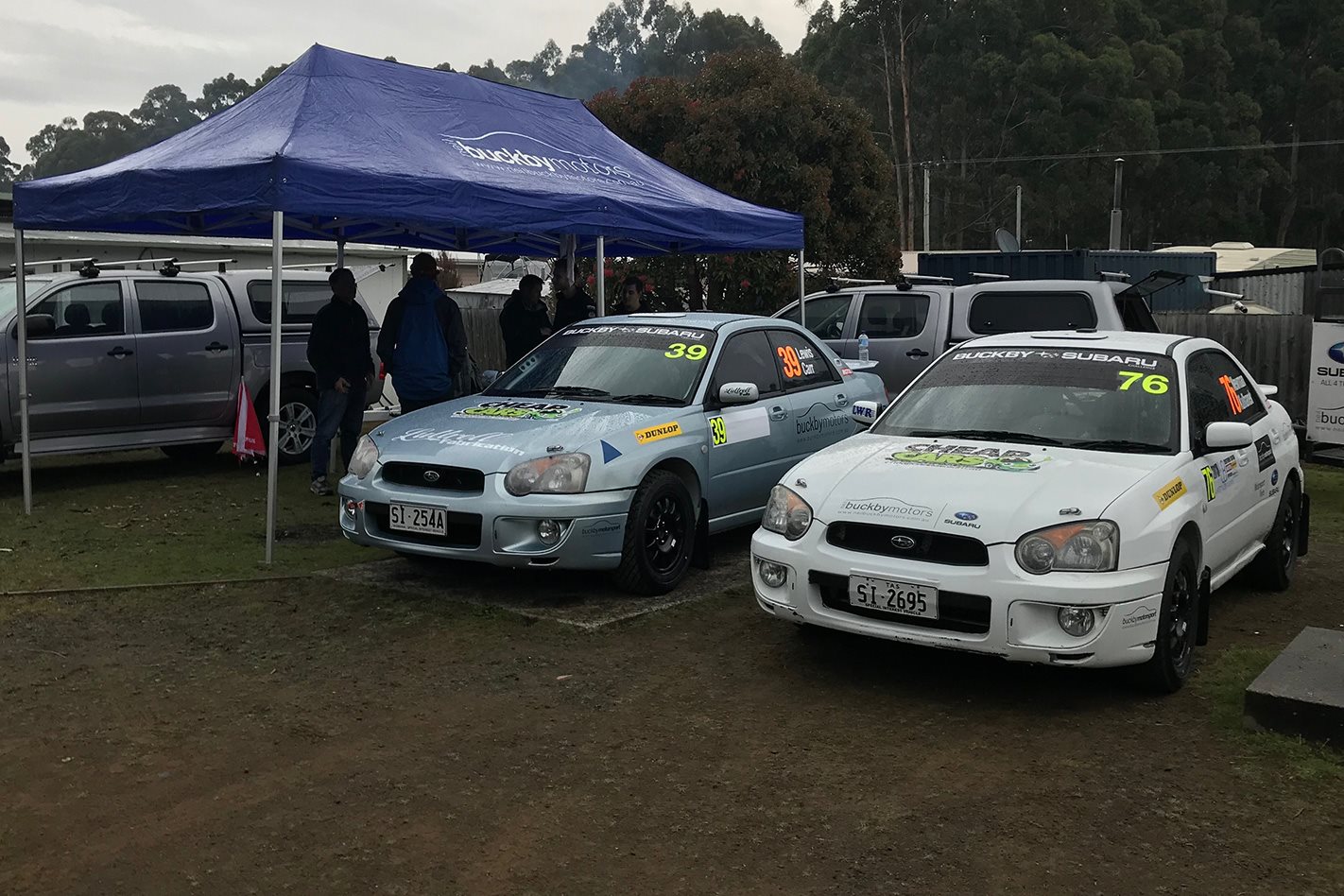 In 2017 it turned its attention to the forest as the naming rights sponsor of the Buckby Motors Subaru RS Challenge, a one-make series using the 2001-2005 Subaru Impreza RS 2.5i, the idea being to provide a reliable and relatively cheap introduction into the world of rallying.

The humble Impreza RS has prior form in the Australian forests, Subaru itself running a one-make series in 2004 and 2005, helping launch the careers of drivers like Glenney and Eli Evans. With just 112kW/223Nm in standard form, the RS is no rocketship but a handful of choice modifications ensure it’s up to the task of tackling the rough stuff. 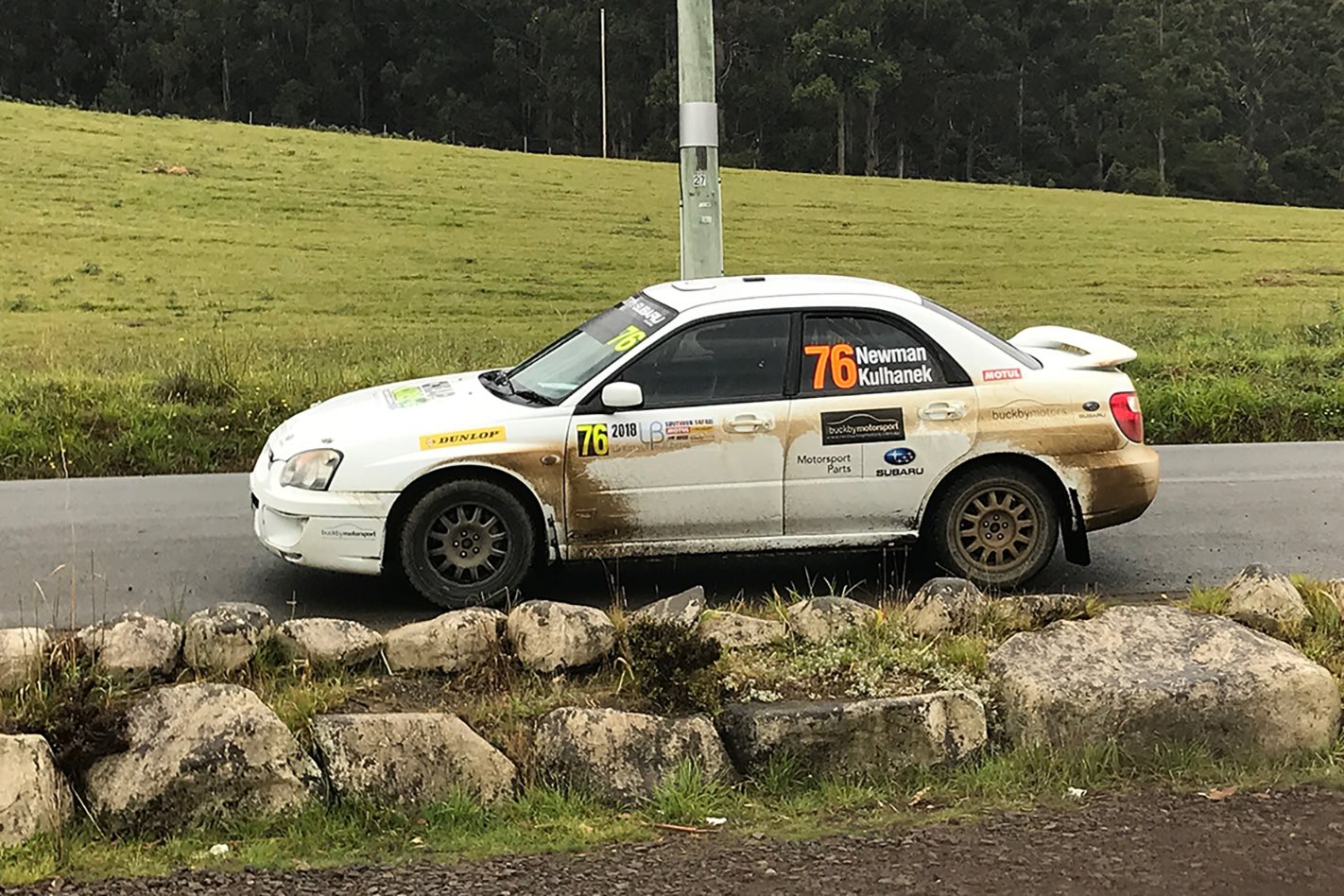 ‘My’ Impreza RS is a former recce car of four-time Asia-Pacific rally champion Cody Crocker. Standard under the bonnet bar a grumbly exhaust, it runs all the requisite safety gear, trick Murray Coote suspension, upgraded brake pads with the booster disconnected and a hydraulic handbrake.

The first round of the Tasmanian Rally Series is the Southern Safari, held in the forests surrounding the small town of Southport, around 90mins south of Hobart. As a pace-noted event, before I’m allowed to get acquainted with my steed Tim and I are permitted to do two passes of each stage to write and check the notes.

As I’ve only ever made pace notes once, to save time and hassle we purchase notes created by Glenney and his regular co-driver Bernie Webb. Tim – who has graciously agreed to co-drive, probably to ensure I don’t break his boss’s car – and I use the two passes to get an idea of the conditions and add a couple of extra cautionary notes to avoid rocks that could damage the car. 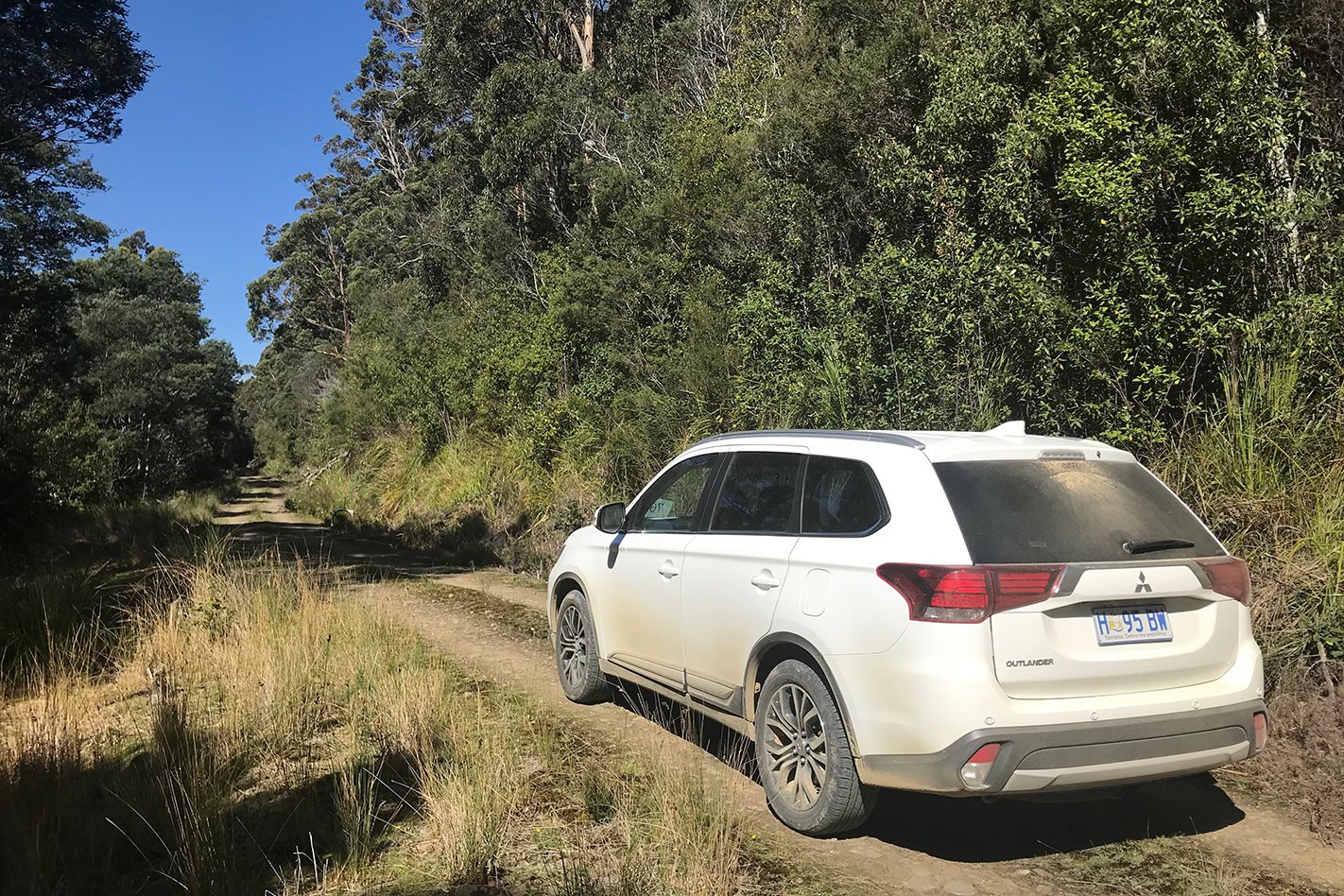 The stages are hugely varied, including everything from narrow, muddy tree-lined tracks to wide, open, hard-packed forestry roads. It’s slippery and rough in places – the hired Mitsubishi Outlander we’re using as a recce car has been requesting a service since I picked it up from Avis, but if it didn’t need maintenance before, it certainly does now.

In stark contrast to the beautiful sunshine of 24 hours ago, rally day dawns wet. It’s easy to find my Impreza, it’s the one with my name written on the side. Bar moving the seat one notch forward, it feels ready to go.

But we’re not, as Tim and I currently can’t communicate. My helmet and the car’s intercom use different systems and for a while it looks as though our effort will be derailed until a fellow co-driver produces the required connector – thanks again Bec! 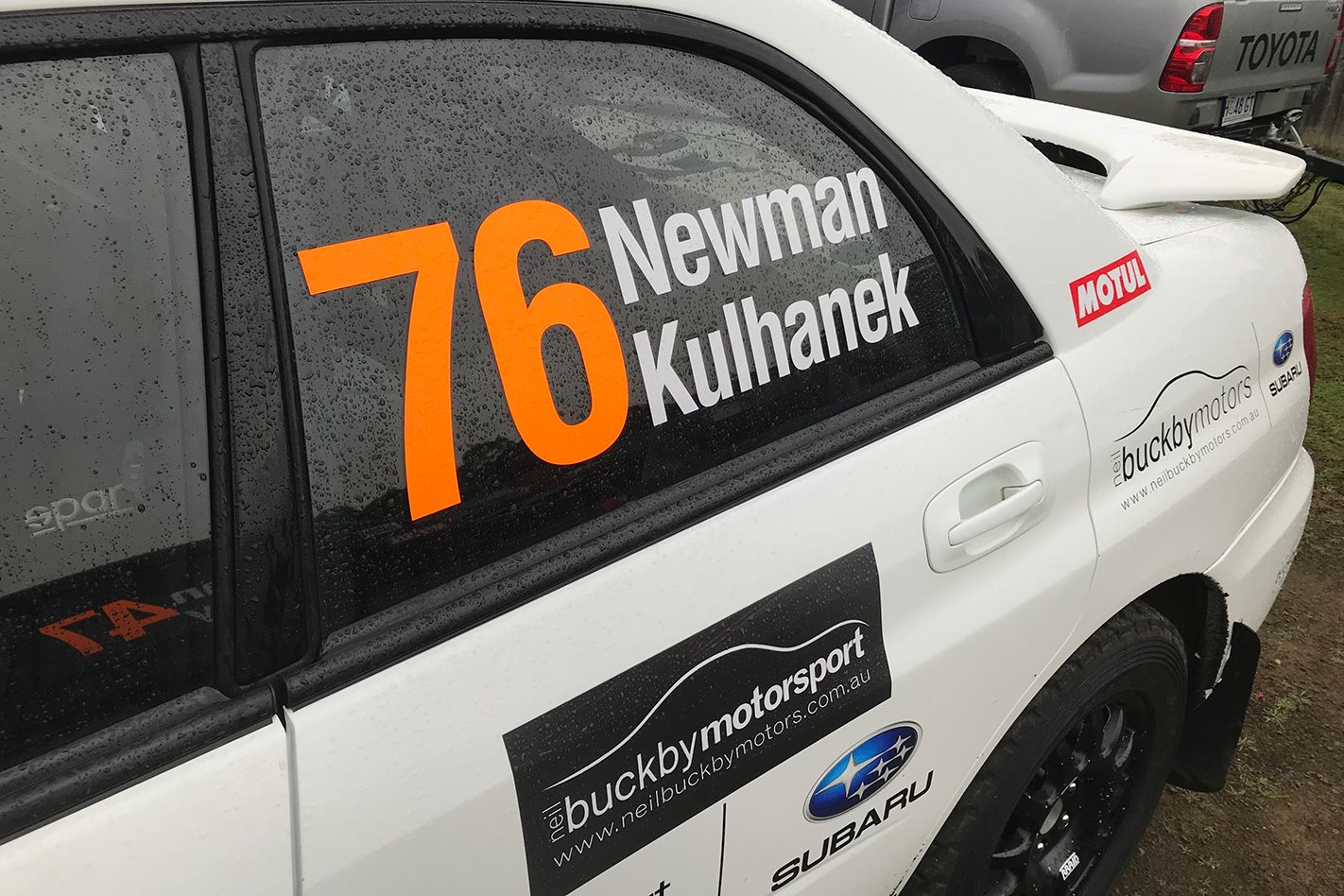 Being seeded 19th out of the 20 cars entered means a reasonable wait until we set off on the five-kilometre transport to the first proper stage, my first opportunity to sample the Impreza. In typical rally car style, it’s incredibly loud (you don’t realise how much sound deadening is in cars until you drive one without any), feels stiff and pressing the unassisted brake pedal with typical pressure achieves precisely nothing.

Annoyingly, the first stage is possibly the trickiest of the whole rally, with the first few kilometres covered by wet leaf mulch – not the grippiest surface around. Thankfully, the good thing about driving is you can go as fast or slow as you like and caution is definitely the aim of the game.

A fellow journo once told me “no one remembers who won, but everyone remembers who crashed” and it’s advice I’ve heeded ever since. No matter what, this car has to finish in the same condition it started. 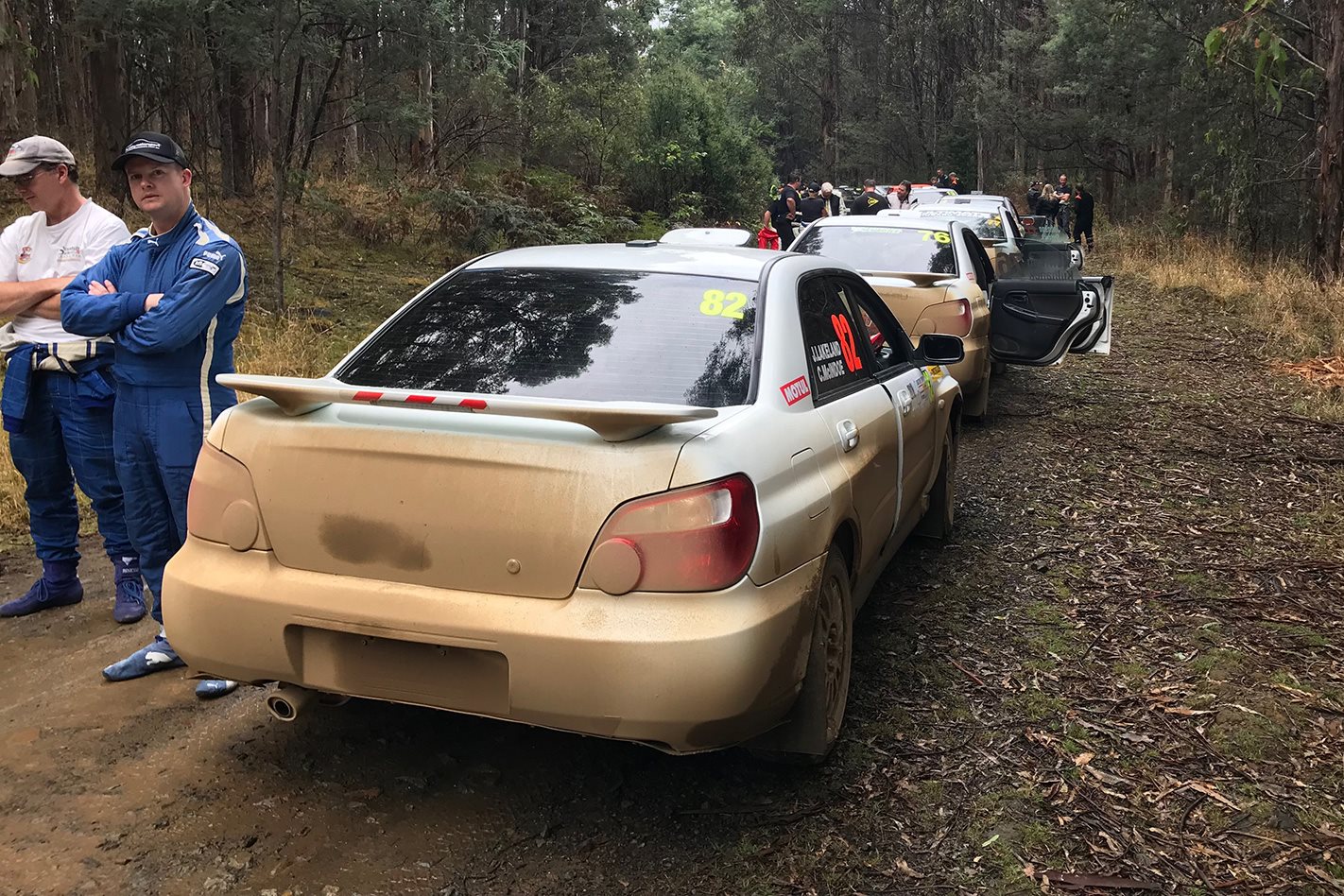 Tim is a very experienced co-driver – he navigated Glenney to that Targa Tas class win among many other achievements – and his voice in my ears takes me back. Back almost exactly 10 years, in fact, as he was my co-driver during my first year of rallying in 2008, a year of thrills and the occasional spill as youthful confidence overrode ability.

There’s no time for nostalgia as trees whistle past the windows, but thanks to a cautious approach the biggest problem we encounter during SS1 is me grabbing the regular handbrake instead of the hydraulic one at a hairpin left.

As confidence builds over the morning stages the Impreza reveals more of its personality. It’s incredibly forgiving, happy to understeer or oversteer but only if you want it to. The ‘correct’ way to drive it is to slide the rear-end on corner entry and exit with all four wheels pointing straight and scrabbling at the road but that approach requires a level of commitment that needs to be built up to. 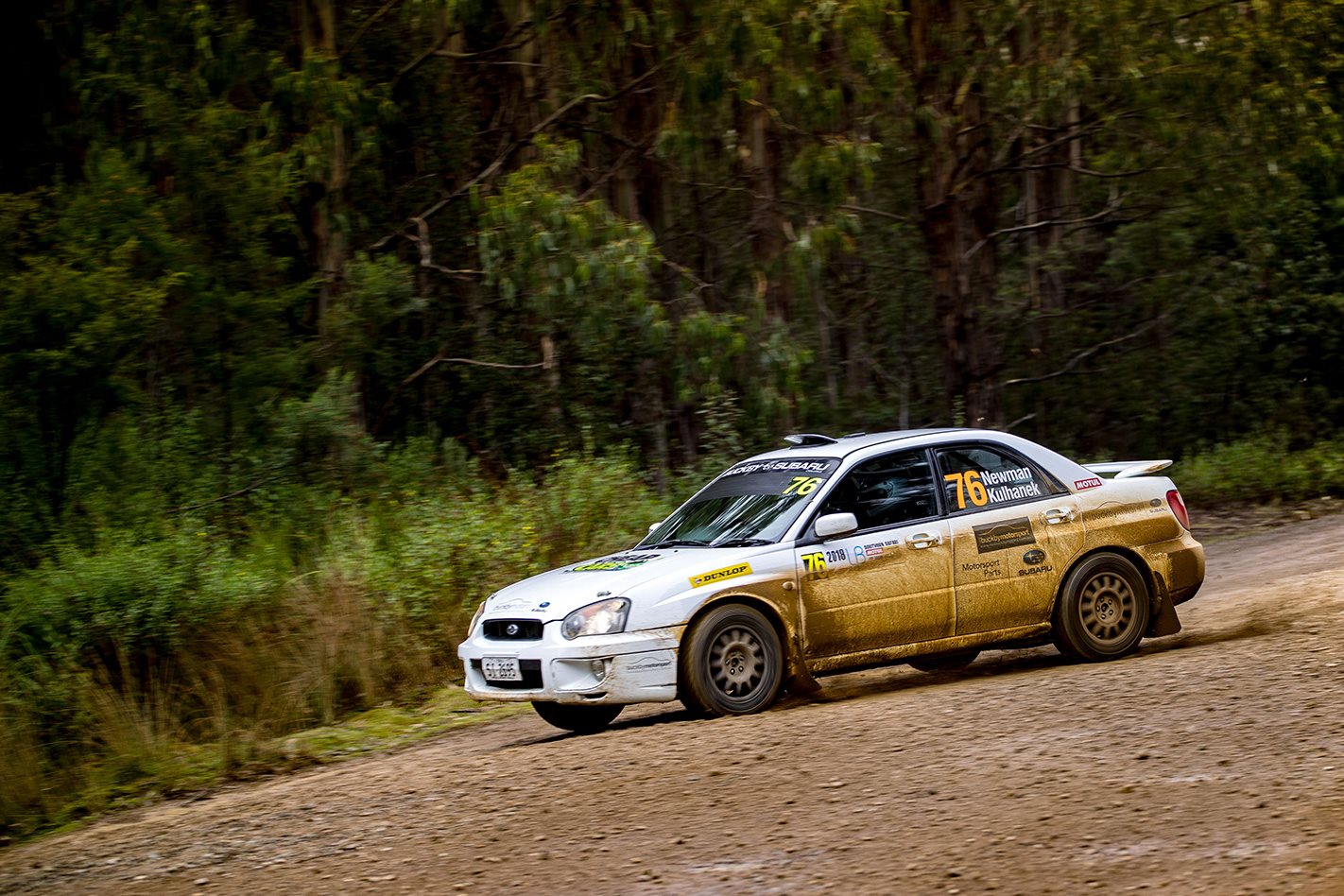 As more kilometres pass our pace increases and at the first service after SS4 we’re eighth outright and the fourth RS behind last year’s series 1-2 finishers Nic Grave and Ben Newman, who as General Manager of Buckby Motors technically owns the car I’m driving, and Targa hotshoe Peter Nunn. Not that I’m aware of our results, as I’ve expressly forbidden Tim from sharing any times until day’s end – it’ll only put silly ideas in my head.

At service the Impreza RS needs nothing more than fuel, the crew likewise. The afternoon stages are a repeat of the morning’s, except run in the reverse direction. It’s a neat trick that allows the same number of marshals to be used while offering a completely new challenge to competitors.

A good lunch has clearly worked wonders, as the first afternoon stage is our best result in the whole rally. We drop 11 seconds in 10.45km to the fastest RS, almost halving the gap compared to this morning’s run over the same stretch of road (albeit in the opposite direction). 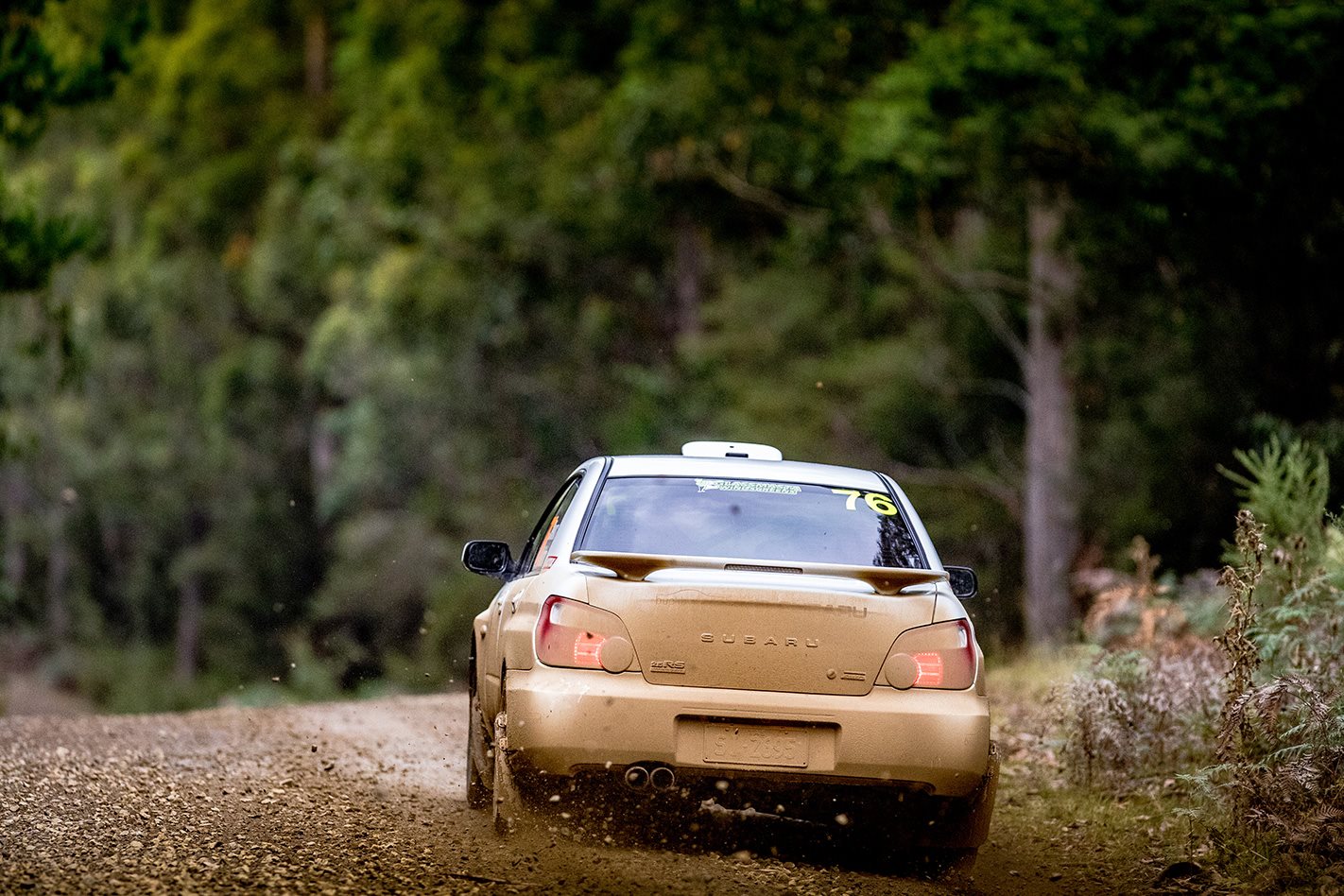 It’s a gap we – or rather I, as Tim’s co-driving continues to be flawless – can’t maintain but with greater familiarity the cornering speeds are increasing and the braking distances are shortening. Having dropped 1min5.9sec to my fellow Newman this morning, we lose ‘only’ 47.8sec over the same distance in the afternoon.

However, as mentioned, I’m not aware of this at the time and continue to just drive at a comfortable pace. I know from bitter upside-down experience that it’s when confidence builds that you’re most likely to make a mistake by biting off more than you can chew. 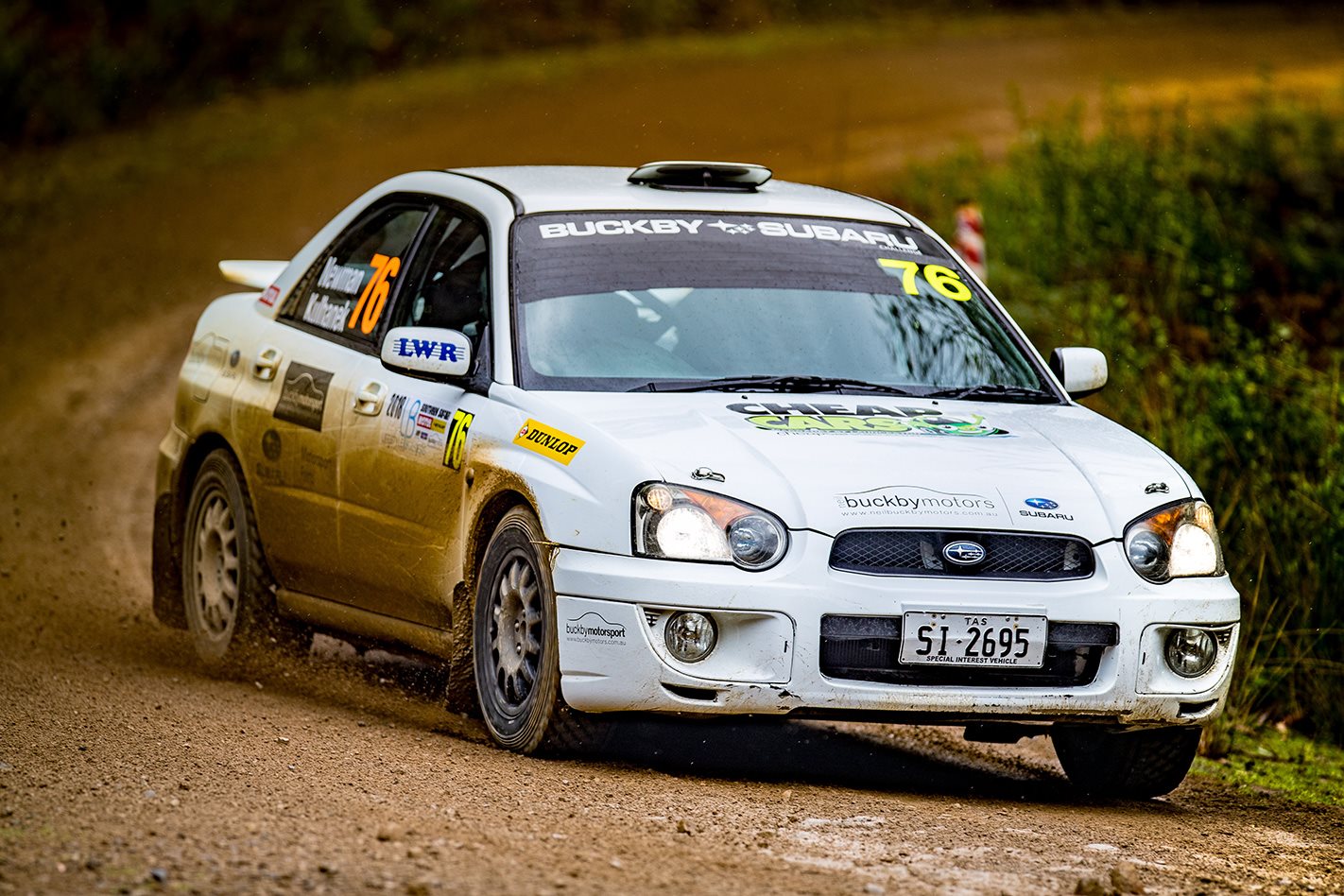 Nonetheless, greater confidence allows greater exploitation of the Impreza’s apparently viceless handling. Pace-note calls of ‘flat left’ or ‘flat right’ are now just that, as are most of the ‘10s’ (the higher the number the faster the corner); ‘6s’ and ‘7s’ invoke little four-wheel drifts and every junction is an opportunity to try out the hydraulic handbrake.

One thing not in the notes is the small fowl that runs across our path in SS6, thankfully quickly enough to avoid lifting the throttle; it joins the wallaby spotted this morning on our ‘wildlife sightings’ list – maybe that’s why it’s called the Southern Safari? 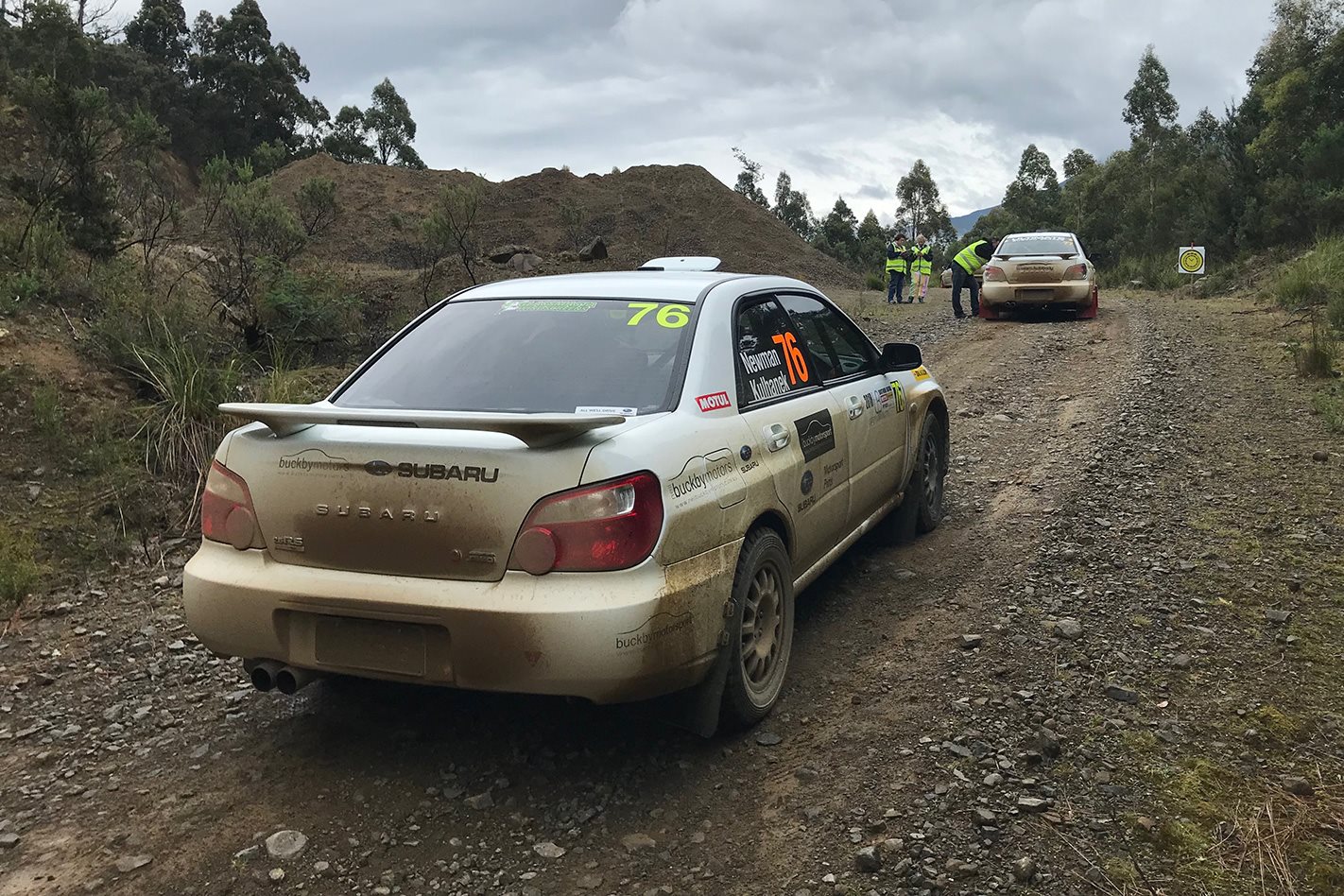 The Impreza feels more or less bulletproof, a hint of rack rattle through really bumpy braking zones the only chink in its armour. The Murray Coote dampers are just magic, soaking up high-speed compressions that had the Outlander lurching into its bump stops at half the pace. Potholes and the like are ignored completely.

Just two stages remain, but stage 10 is a biggie, consisting of two other stages combined to make a 22.66km epic. That mightn’t sound that far, but it’ll require 100 per cent concentration for more than 14 minutes when every crew is starting to feel the effects of fatigue. 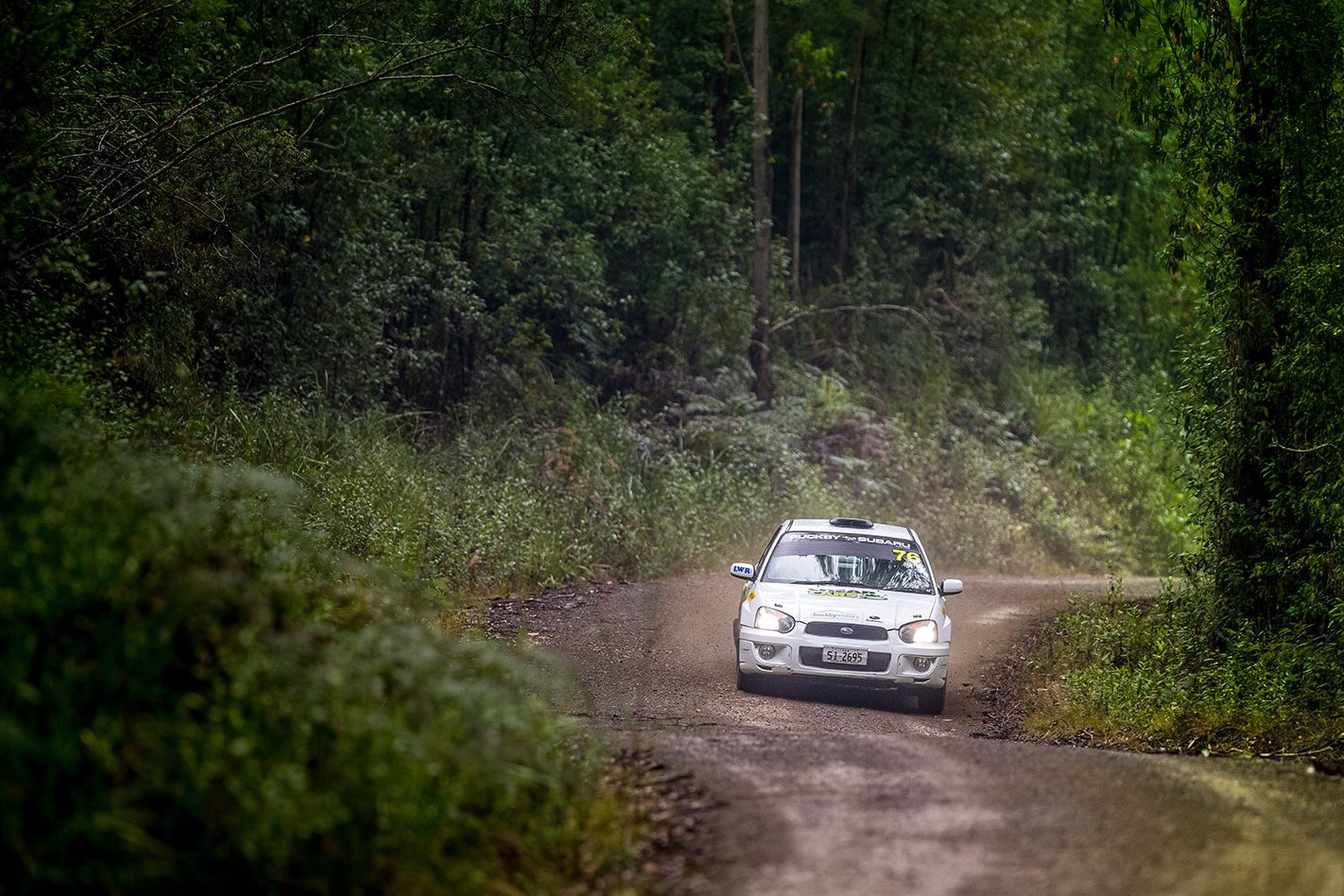 However, it’s also long enough to develop a rhythm and the stage itself is fantastic, fast and flowing with every conceivable surface, the Subie screaming at redline in fourth gear – close to 160km/h – as my right foot finally obeys Tim’s “flat over crest” calls and stays welded to the firewall.

And screaming is the right word, as an exhaust leak has the RS’s atmo 2.5 barking and backfiring like McRae’s Group A WRX. We’re 36.5sec slower than Ben Newman through the stage, which is a lot, however he’s produced the drive of his life to snatch second-place outright, the winning GC8 WRX STI of Bodie Reading thrashing everyone by more than five-and-a-half minutes.

With one final leap through the air our Impreza RS crosses the finish line and Tim and I retain our perfect 100 per cent finishing record in a rally car – six from six. We weren’t the fastest, but it’s doubtful anyone had more fun.

A check of the final results reveals the names of Newman/Kulhanek as third in the RS Challenge and a surprising fifth outright, thanks in no small part to a number of competitors remodelling their rally cars against parts of the Tasmanian scenery.

Nevertheless, it’s also a testament to the car. Safe enough to learn in, yet fast enough to trouble the podium in experienced hands, the Impreza RS is a fantastic entry point into the sport of rallying. It’s not exactly cheap – no motorsport is – but our car needs nothing more than a wash and perhaps a new exhaust gasket to be ready for the next round. Parts are inexpensive, too. 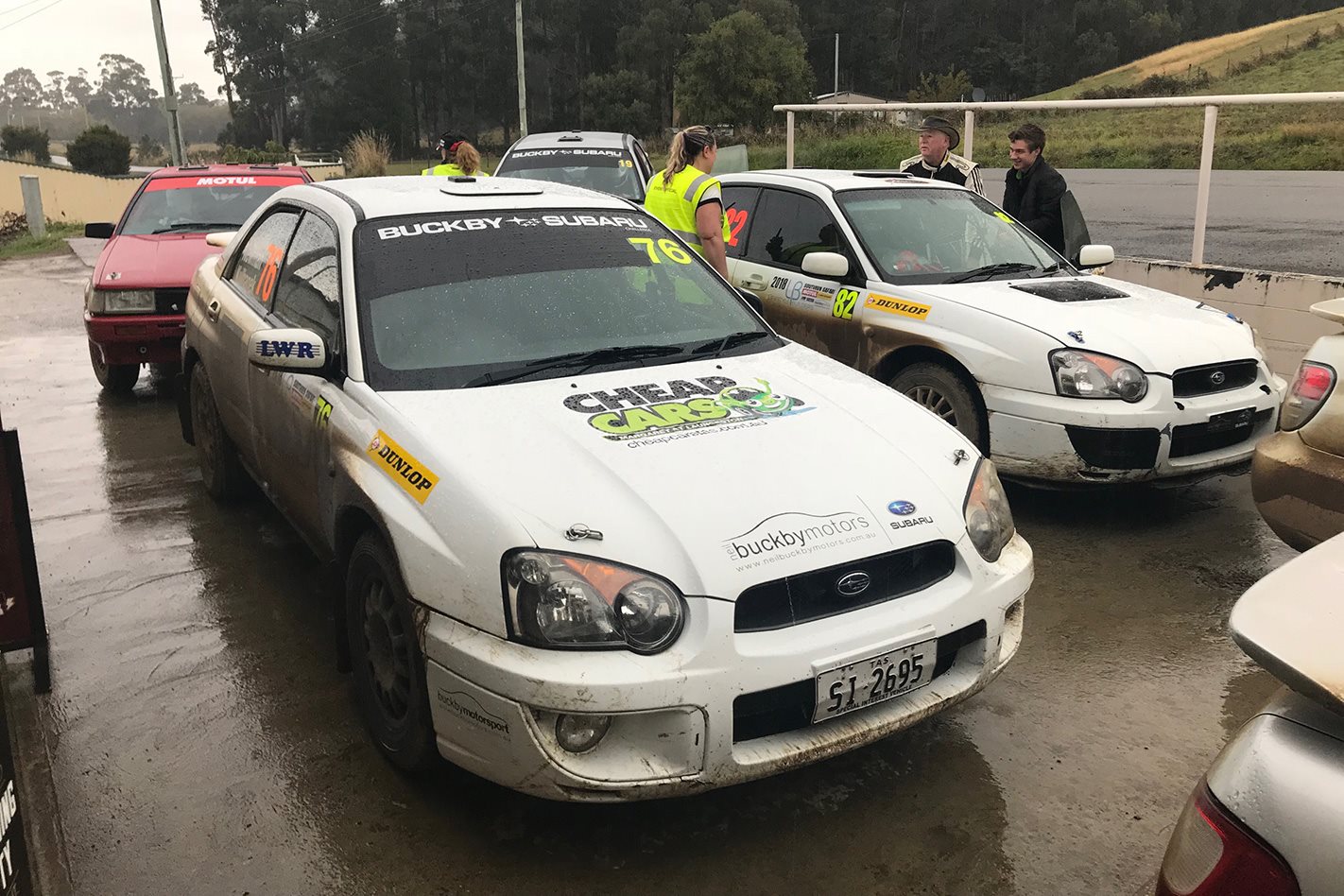 A word of warning, however, should you choose to dive in: rallying is a drug and there’s every chance you’ll end up selling possessions, furniture, possibly even body parts in order to keep fuelling the addiction. And yet I can’t say it isn’t worth it. 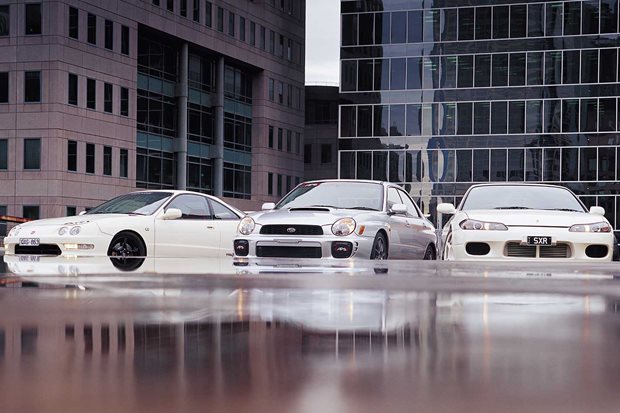