Youichi Hara is gesturing at a silver metal rabbit. With his best broken English he’s trying to explain why Thumper’s leaping off a Datsun’s bonnet, like a classic Jaguar ornament.

But he’s wasting his breath. As his gravelly voice murmurs on, nobody’s really listening. Only a few from a tribe of Australians pay him the courtesy; the rest have scattered. 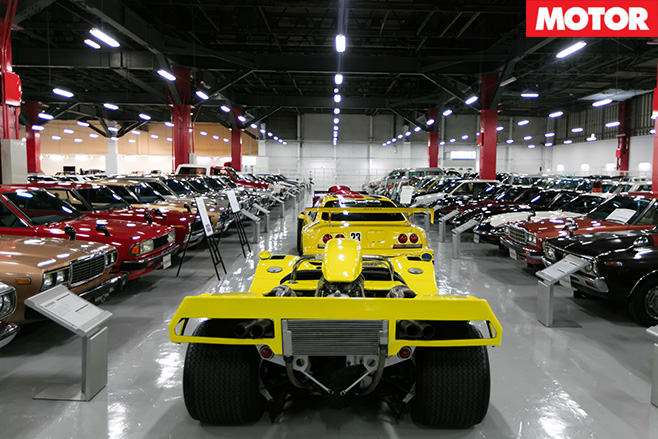 We’ve been granted access to Nissan’s ‘secret’ warehouse for only a short time, and he’s competing with things of much larger, and cooler, prestige.

Behind him, under the fluorescent lighting haze of a warehouse that once thrived as an assembly plant, Nissan has amassed the world’s most impressive army of its own heroes. It’s known as the Zama Heritage Collection. 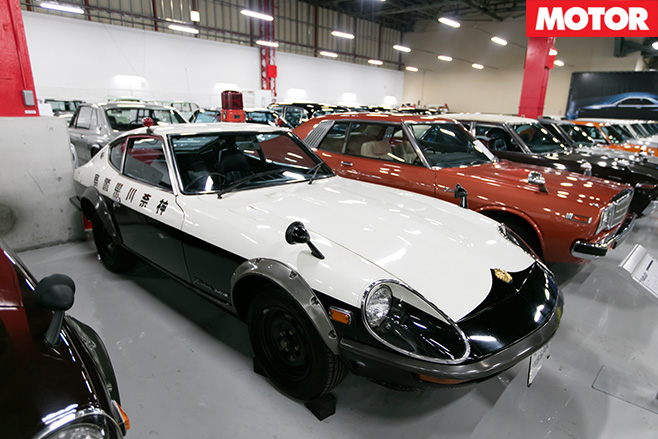 Hara-san is one of many who, like the cars, enliven Zama. Dressed in a navy double-breasted jacket, a red Nissan cap, and well into his retirement years, Hara-san once steered the future of the Z brand as its general manager. He also helped birth the Silvia S13. Today, though, he’s our tour guide.

Now when we call the warehouse ‘secret’, we’re not talking about crawling through an underground tunnel for access. It’s open to public tours, provided you book online. But because the collection is nestled within Nissan’s Zama factory site, which bustles as a technical centre and produces lithium-ion battery cells, everywhere outside is off limits. 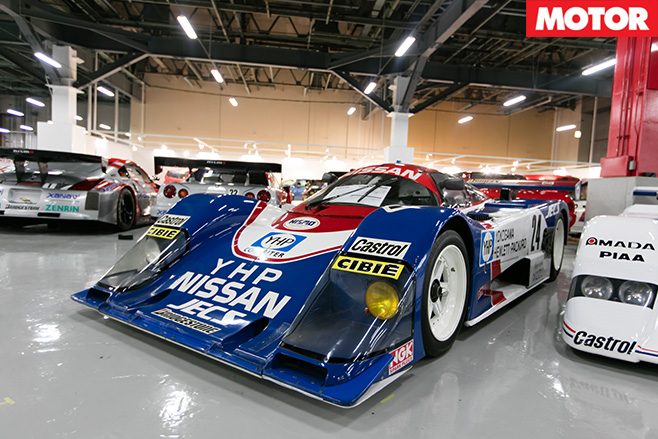 Our minders wouldn’t even let us snap a photo of the garage door from the outside, which was left open to welcome home racecars from the Nismo Festival for a thorough going over.

Ironically, though, nothing about the warehouse grabs you like the priceless machinery inside it. Outside it’s completely nondescript. If it was street-side you’d walk right by it, oblivious to the 300 rare road and race Nissans that huddle within its walls. 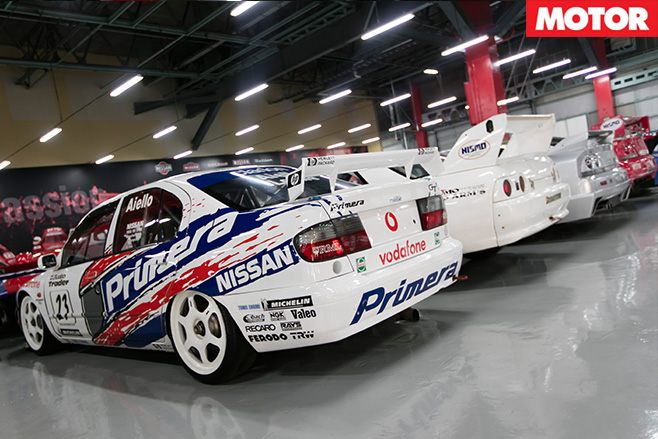 And what a collection it is. It kicks off at the company’s roots, in 1933, with its Datsun 12 phaeton, and ticks off almost every road car up until today’s R35 GT-R. Colouring in the chronological line-up are quirky one-offs and prototypes at one corner of the warehouse, while classic racecars still bearing competitive damage survive in another. 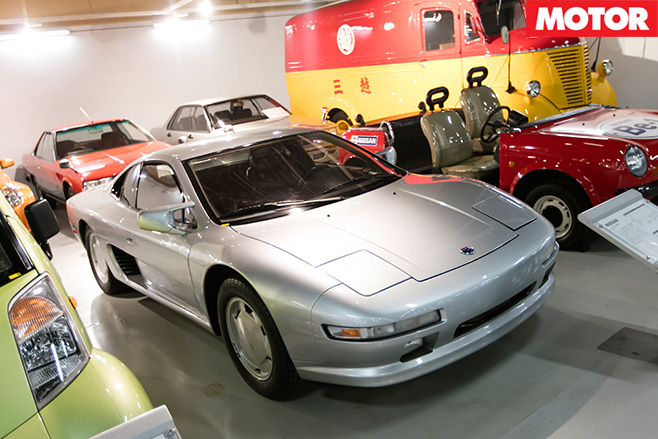 The MID4 II was a concept destined to stoush with Honda’s NSX, using a mid-engine 242kW powerplant as its left jab. But a showdown between Japanese super sports cars wasn’t to be. Instead the MID4 donated its all-wheel drive and four-wheel steering technology to models like the 300ZX and Skyline, after it was deemed too expensive to make a reality.

So in a way, it’s the genetic godfather of Nissan’s modern sports cars, preserved here as a reminder of what could have been. 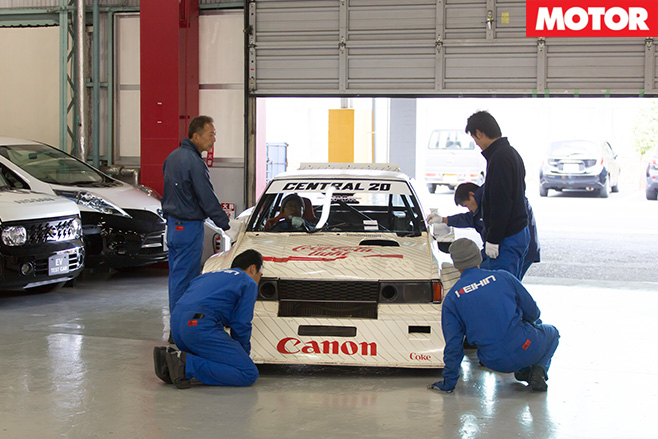 The MID4 rarely moves, but Nissan’s eager to correct anyone who calls this place a museum. Four mechanics, each with 30 years’ experience, tend to the cars day-to-day, and we’re told more than 70 per cent of the cars here are ready to run, while the rest are currently awaiting restoration by specialists.

But the real attractions are the racing weapons and the road cars they inspired. As we follow Hara-san down an aisle of classic Datsuns, I quietly peel off to avoid missing out on the prolific legends. 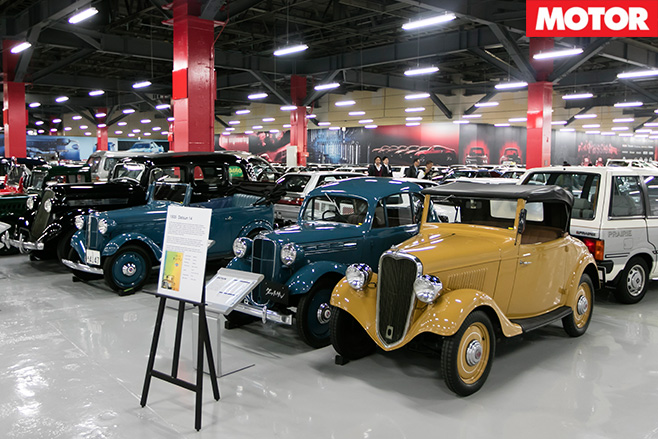 I savour the little time left by rushing to the sole R390 GT1 road car in existence, which, after being moved to make way for the racecars returning from Fuji Speedway, sits quietly on its own.

Its soft edges and deep blue paint mean it’s not particularly striking in the metal. But it exudes an aura, a pull, which partly stems from the fact that if Nissan had ended up selling the car, it’s mooted it would have cost AU$1.3m back in 1998. 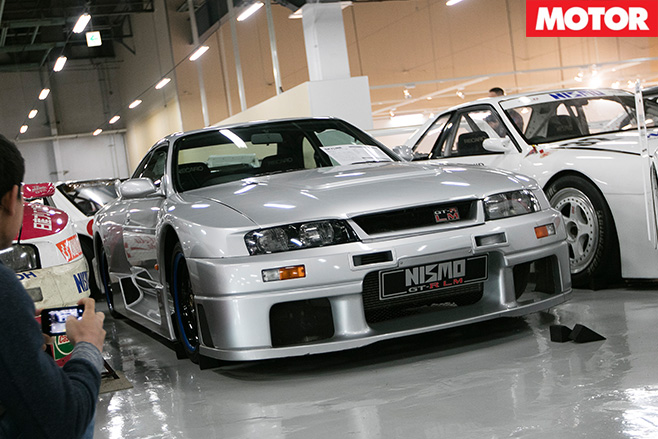 From one homologation special to another, I next sail towards the unusually wide grey R33 GT-R lurking close by. It’s called the R33 GT-R LM. Like the R390, the GT-R LM was a one-of-a-kind project that allowed Nissan onto the Le Mans grid in 1995. It looks like the racing R33 LM beside it without stickers, which, in a way, it sort of is.

With one eye locked on my watch I pinball between cars and try to drink in as many priceless beasts as possible. But at this point, our Nissan minders are filtering through the warehouse collection, rounding up the loose Australians with Pacman-like focus. They direct us towards the exit, hours too soon. 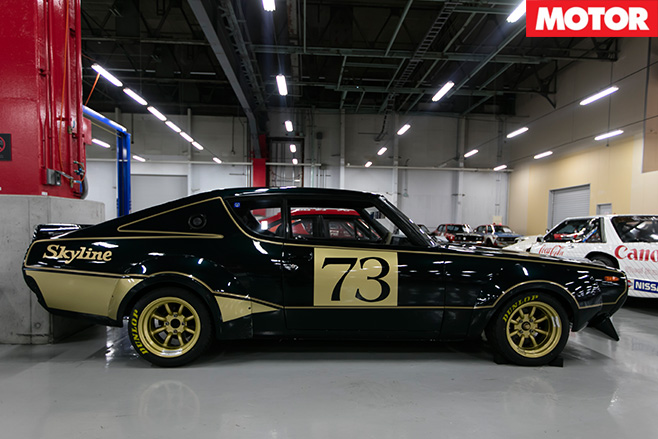 As I drag myself towards the doors, I recap. Thanks to Hara-san, I’ll remember that a small leaping rabbit almost became Datsun’s hood ornament – until too many owners broke them while cranking their cars.

But the main thing I’ll remember, if I ever return, is to book a longer visit. 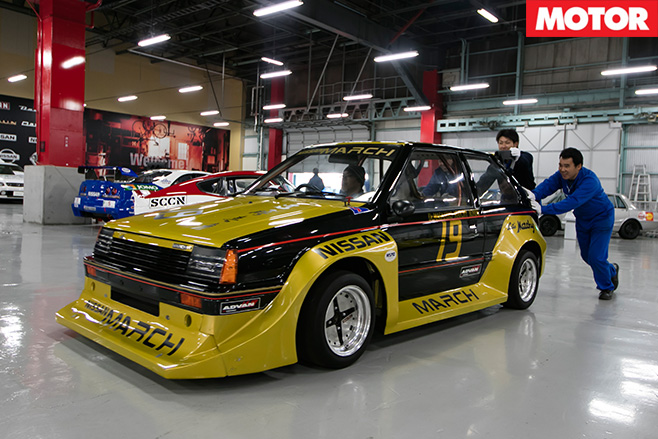 Lift up the couch on Nissan’s history and you’re going to find some weird creations.

Scattered around the Zama warehouse was everything from a baseball stadium car to a sedan specifically modified to hold the ’64 Olympic torch.

However, what caught my eye was this Nissan March (right). If you think it looks like the Super Silhouette racers that defined Japanese Group 5 racing in the '70s, you’re right.
Nismo built the car for Masahiko Kondo, or ‘Matchy’, a pop-rock celebrity. Matchy
was the car’s ambassador, but also quite the racer, and today runs the Super GT outfit Kondo Racing.

While the road car’s 1.0-litre four made do with 42kW, Nismo thrust a larger 1.5-litre four into its nose, effectively tripling its output.

It then slapped Group 5-style fenders on either side of it to add 150mm of track width.
Today Matchy’s March joins the real Silhouette cars in display areas, like a mascot. 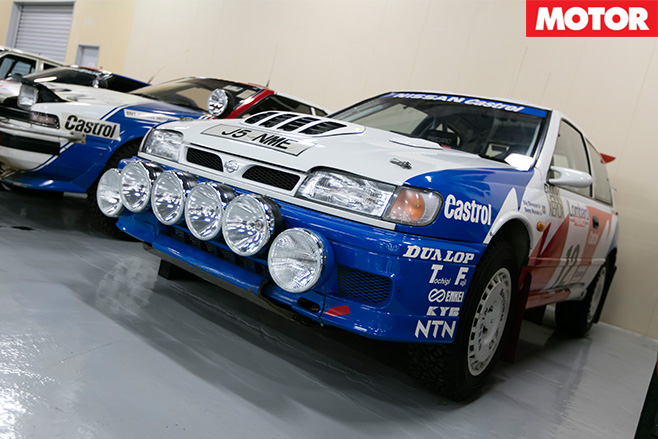 The one-off road specials
Often marketers beat the ‘racecar-for-the-road’ drum, but it’s homologation specials like the R33 GT-R LM (left) and R390 GT1 (below) that are the literal translation.

As far as Skylines go, the R33 GT-R LM is rarer than Tassie tiger teeth. When Group C regulations were shelved at the end of 1994, Nissan scrambled for something to race at Le Mans. In its pantry was the R33 GT-R, successor to the all-winning R32 GT-R. It pumped its guards, dropped its front driveshafts and tickled its engine, but before it could race Nissan needed to homologate the mods on one road-registered car. That honour went to the Zama Collection’s example, which was registered in the UK.

A year later, history repeated itself, but this time Nissan designed the racecar first, the sole road car needed for homologation, second.

The resulting R390 GT1 was a carbon-chassis, 410kW beauty that claimed third at Le Mans. 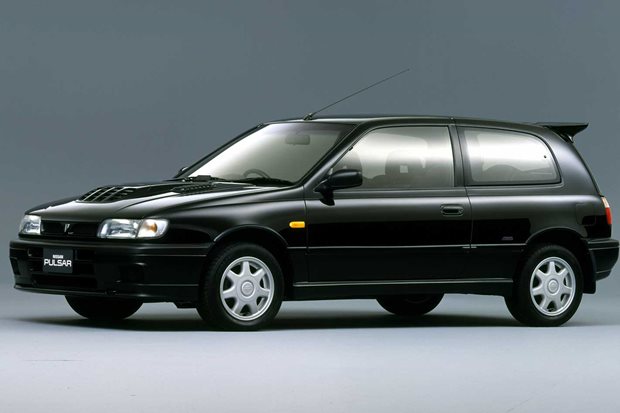