“Martin, it’s Jesse. I met this guy on an internet chat site, and he’s invited us away to the Rock for a weekend. He told me he had a Ferrari… Oh, and when I say us, I mean you.”

Relayed to you by a mate this would normally ring alarm bells, but when Jesse informed me it was all above board and part of the inaugural ‘F-chat’ (www.ferrarichat.com) ‘Exotics in the Outback’ run, well, muggins here couldn’t resist a look.

Turns out it wasn’t just one bloke and a single Ferrari, but rather over two million bucks' worth of precious Euro metal and a bunch of guys ready and willing to take their hard-hitting exotics to the limit, again and again, that stamped this meet as the most significant supercar gathering in Australia. 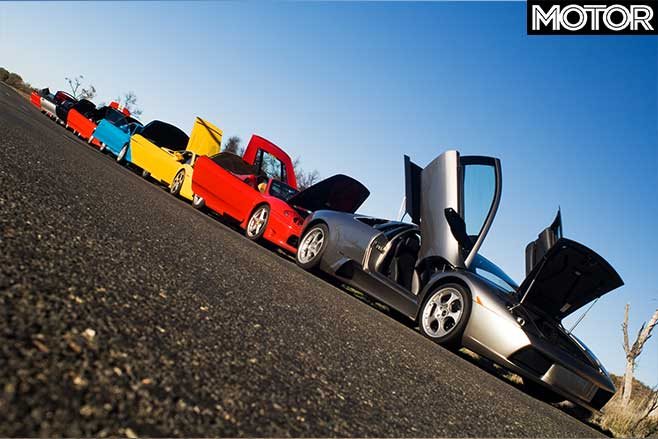 Waiting by the roadside in Alice Springs it became obvious that photographer Bowden and I weren’t the only strangers in this group. In fact ,with hearty welcomes and tightly clenched handshakes these blokes were making their first physical acquaintance.

That’s right, although they shipped their cars halfway across the country not one of these guys had ever met the other, only swapped car photos on internet threads bound their common interest, driving some of the world's fastest cars flat to the boards.

As the cars rolled out of the specialised transporters (one ex-Melbourne, the other ex-Brisbane) their mega-dollar payloads had me salivating. Our Monaro - thanks Jesse - was looking well out of its depth.

First up was a brand spankers 360 Challenge Stradale. Complete with optional racing stripe it was in stark contrast to its stable mate, a GT2, which Stradale owner Roger kindly brought along for his brother to try out. Oh yeah, he, by the way, just so happens to own a 360 Spider. 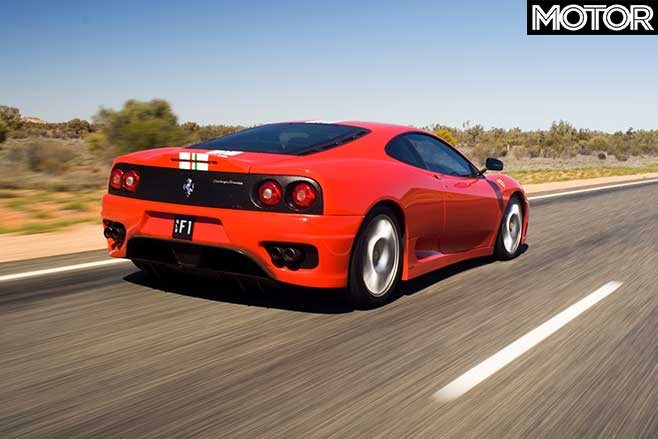 Not to be outdone the mob from Adelaide and Sydney offered up an E-gear Gallardo and a late model Boxster S. Completing the field was a ‘driven to Alice from Adelaide’ Honda NSX, and the big daddy of the open road, Neville King’s hard-hitting Murcielago which resides in Alice, proudly displaying its ominous 330-KPH plates.

48 Hours in a Lamborghini Gallardo

“This is not, I repeat not, a race” a point Ash Simmonds, the organiser of this thrash-fest, made very clear. “Remember guys, we are here to experience our cars at speed, not to race anybody, or do anything stupid.” Everyone agreed, nervously scratching at the ground with faux-race shoes, adjusting their sunglasses or fidgeting their hands.

Heading west from Alice Springs, Neville makes sure to keep the tightly-packed group at the sign-posted 50-70km/h speed limits. He wants to keep us safe, just like the guy in the silver BA GT-P who pulled over while the supercar pack fuelled in central Alice: “Don’t do anything stupid and ruin it for the lot of us”. The Cannonball Run tragedy, when two Japanese racers and two officials died, still burns brightly in the minds of the locals.

You wouldn’t expect Alice Springs to have such an interesting landscape. And roads. Forget about cliché images of red dust and desert, the track out west is instead full of ridges, rocky outcrops, and a road that links long de-restricted straights to bends with the sinewy curves of a dreamtime python. 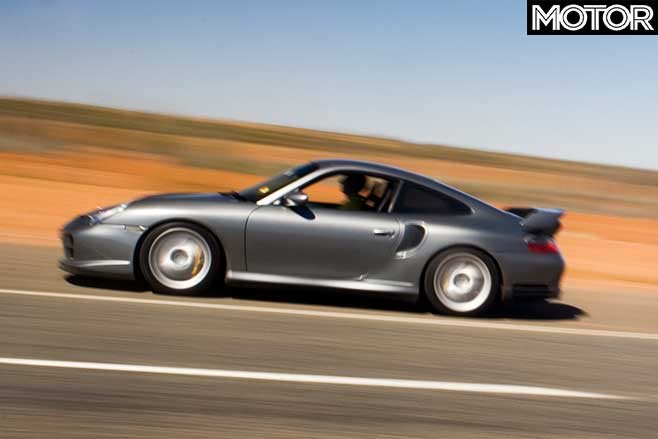 Neville steps up the pace and a clear pecking order establishes out front. The Murcie leads the way, followed by the Stradale and Spyder, but it’s the GT2 that stamps its authority with raw overtaking firepower, coming past the Monaro at a rapid clip, all while we were accelerating full tilt in fourth.

In rough terms it’s about a 120km jaunt from Alice Springs to the large rock monument on the Sturt Highway. It’s quite possible to knock this section off in just over half an hour, depending on the road conditions. 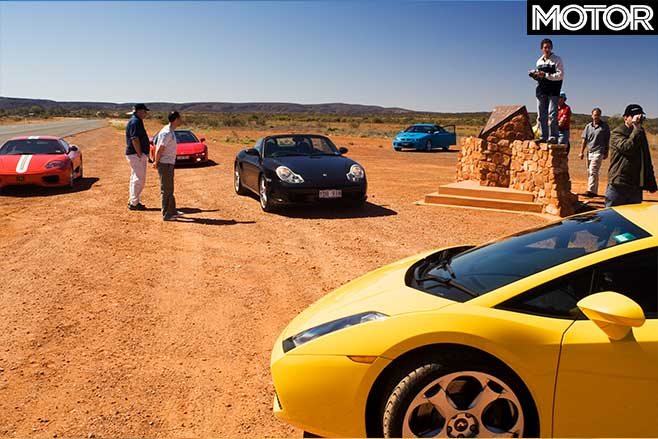 This would be the chance for everyone to test their top speeds on some dead straight, and pretty flat, roads. About the only concern are the huge road trains (some of which measure nearly 60m in length), but you can see them coming a long way off and have plenty of time to stop.

The secret team that set an illegal high-speed Cannonball record

Roger is the first to break the seal, crackling over the radio that he’d touched the Ferrari’s rev limiter in top gear, his Challenge Stradale indicating 310km/h. Backing this up is the Gallardo, rowing along quietly in the pack, but still indicating a best of 298km/h, which put it a nose in front of the 360 Spyder, which amazingly enough hit 290km/h with the roof down. 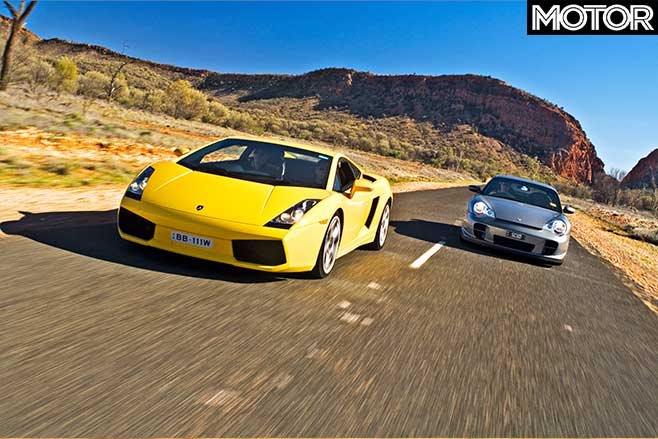 Peak speed in the Monaro, using the digital dash readout, came in at 257km/h, with the shorter 3.7 rear end gearing of the VZ ‘nostril car’ forcing you to hold it on the limiter in fifth gear to get this number. A good show from the Holden, and one that was able to keep us well clear of the marauding, roofless Boxster.

LEG THREE – CANNONBALL TO THE LASSETER TURN OFF

Such was Neville’s raw pace in the Murcielago that after another 80km of driving he is able to pull over for his passenger to take a nature break, and it still takes us a while to catch him. “I like these roads and know them pretty well,” Neville laughs. 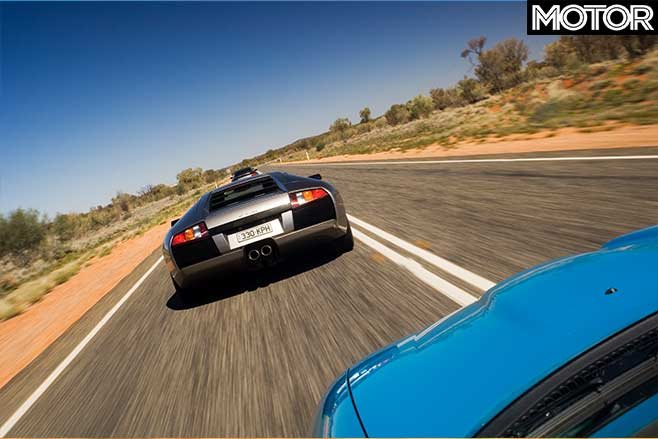 Refuelling the thirsty mob at the Mobil takes nearly half an hour, as each car waits in line for the Premium pump. This is where Neville leaves us, returning to Alice for business, but giving us fair warning that from Lasseter to Uluru the road is speed limited, and quite literally covered in wandering wildlife… something we very nearly find out the hard way.

Idle chat over the radios, and a few fly-bys passes from the nicknamed ‘Bogan Taxi’ (not a nice way to talk about the Monaro, guys) keeps everybody laughing, but it nearly turns to tears not long after I swap seats to give the photo ‘Guy’ a steer.

“Hey mate, you see that?” he squints looking around 400m down the road “Nope" I counter, "what?” “It was something really bi…” And then, like a thunderbolt, a pack of unkempt woolly cattle come charging from the bushy verge straight at the side of the Monaro. Using some stored driving talent which photographers often talk about yet rarely display, Bowden swerves and misses them by centimetres. 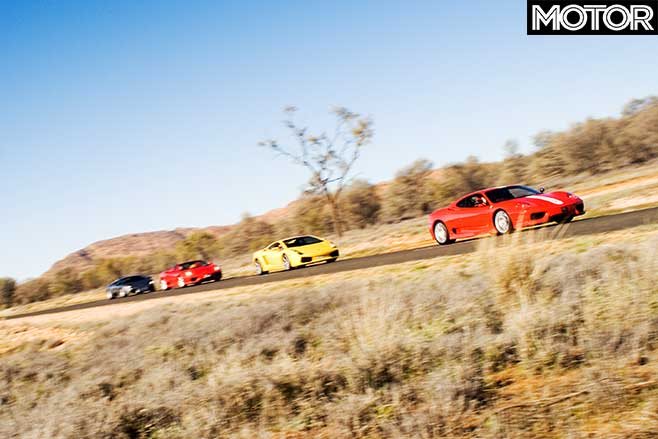 Eyes turn to the mirrors. The Stradale, next in line, musters all its carbon-braked, F1-inspired technology, bouncing hard against the ABS as the bovine boofheads pause their charge to check out the nose of the Prancing Horse.

Luckily a chain collision is avoided as these wildly over-braked cars all hunker down and claw into the blacktop. Thankfully we were leading the pack at this stage, as although the PBR Performance stoppers on the Monaro are good, they don’t make the cut in this field.

The aboriginal owners of the Rock and its surrounds ask that you respect their ‘special place’, and we do so by adhering to the signposted speed limits on the perfect 40km run from the park entrance to Kata Tjuta (The Olgas).

Porsche 918 Spyder in the NT

There are still opportunities for fun though, as the wide, perfect sweepers switch back and forth with ever increasing fervour. I get a chance to rie shotgun in the Stradale here, and as you would imagine, its limber chassis and bags of mechanical and aero grip endow it with transcendental cornering power. 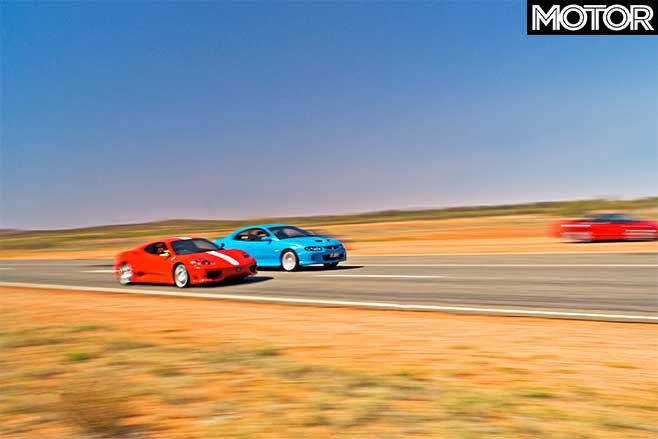 With the photography out of the way all discussion turns to the trip back to Alice, and the top speed test for the GT2 which hasn’t really stretched its legs in anger. When it does, how does 332km/h indicated sound?

We leave the ‘f-chat’ pleasure train here, turning off onto the Sturt Highway as they make their way back towards Alice Springs and some more 300-plus running.

Our trip back to Adelaide is uneventful and relatively slow. In 48 hours of ‘running with the bulls’ we had slurped down nearly 300 litres of fuel, and held full throttle for as long as the Monaro’s underpinnings, and our sensibility meters, could cope with the pace. It’s the best speed therapy we’ve had in ages.

Across the 48 hours of flat-out driving the performance of the Monaro started to carve a niche of respect by being able to stick with the flat-out runners, all without giving a murmur of a reliability problem. In fact, surprisingly, the much maligned Gen III LS1 was one of the few engines not to use any oil over the weekend. 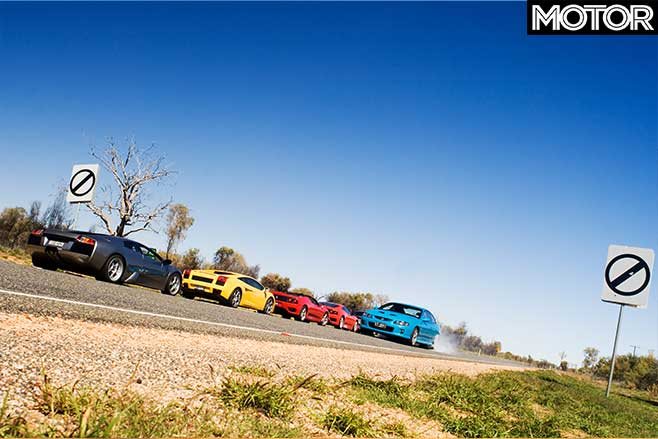 Then there was the frugal use of fuel. While the exotics were all pulling big rpm at high speeds, the tall sixth gear of the Monaro meant that even at 230km/h the tacho needle was sitting somewhere around 3500rpm. This open-road ratio gifted the Holden with fuel economy that matched the super efficient NSX down to the very last litre at every single fuel stop. Who would have ever picked that?

About the only shortcoming of the package was the lack of damper control in the suspension when running absolutely flat to the boards. Floodways and big corrugations unsettled the chassis and gave a few ‘quease inspiring moments, but never did it feel dangerous. 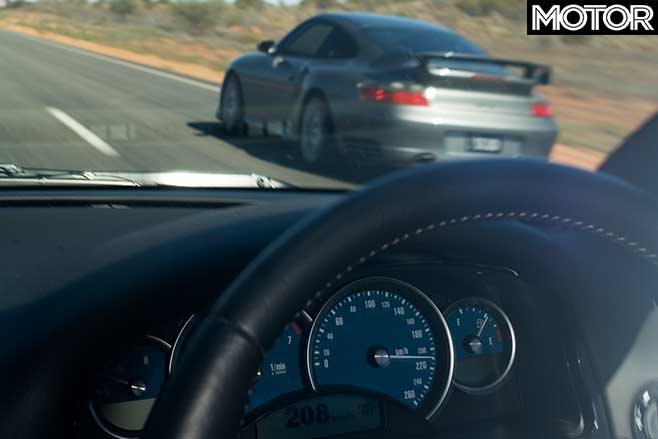 It also lacked the aero package that kept the Euros sucked to the road in 200km/h-plus sweepers, requiring a partial lift and some left foot braking to settle the chassis on turn in. And the brakes? Great for normal freeway speeds, but out of their depth washing off speed from 200km/h.

Running with the world’s best, and holding its head high was a fitting farewell for the iconic Holden coupe, one that earned it both our respect, and the nickname of ‘The Glendambo Lambo’. See you on the other side, mate.