More than 1500 readers were in it to win it. Nineteen of these readers qualified by best answering what the BMW M badge meant to them and won a spot on a specially tailored BMW M Driving Experience

Damn, it’s hard being a driver in Australia. What, with no Nürburgring, no autobahns and no common sense when it comes to speed limits. Or their enforcement.

At least the spirit of German motoring is accessible in our country, though, through the Teutonic trio of luxury car brands that offer drive-as-fast-as-you-dare track-day packages.
MOTOR, naturally, has always been a staunch advocate of such driver training days, which is why we recently teamed up with BMW to set up a competition for readers to win a spot on a specially tailored program.

More than 1500 readers were in it to win it. Nineteen of these readers qualified by best answering – via motormag.com.au – what the BMW M badge meant to them. (Saying “motorsport” would earn them a slow-clap from us, but no ticket to SMSP!) 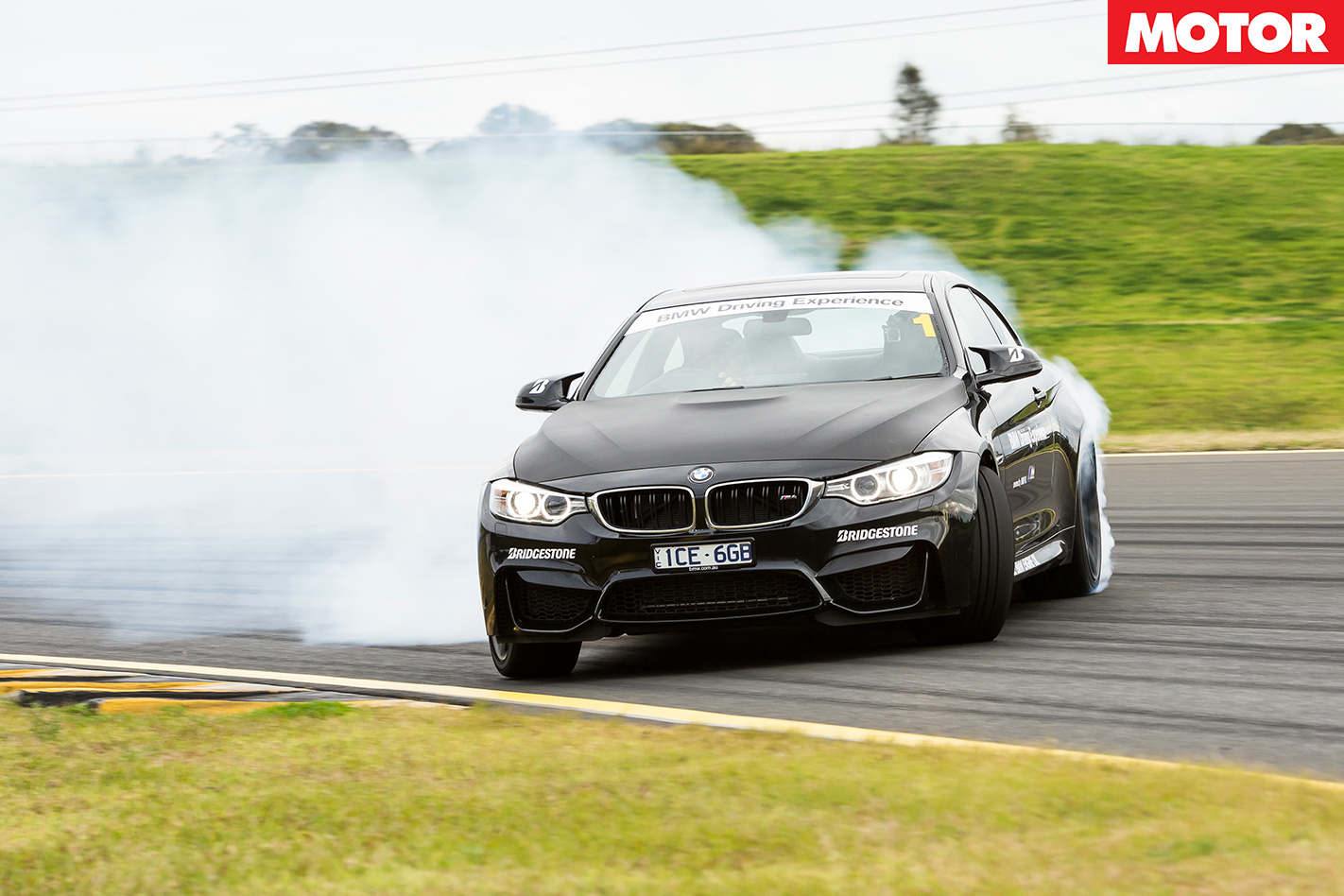 The prize was spending a day with more Ms than, err, an M&M confectionary party. How good does this line-up sound? BMW’s M235i, M3, M4 and – just for our readers – the M5, the recently-refreshed M6, and the new second-gen X6 M.

That wouldn’t be a bad return for the Intensive Driving Experience’s usual $1395 cost, let alone when it’s free.

Intensive is essentially an entry-level course (of three offered by BMW), aimed at drivers with varying levels of skill. So, before chalking up any laps, it’s first to the ‘blackboard’ for an hour of illustrated theory lessons with BMW’s chief instructor Derek Walls. 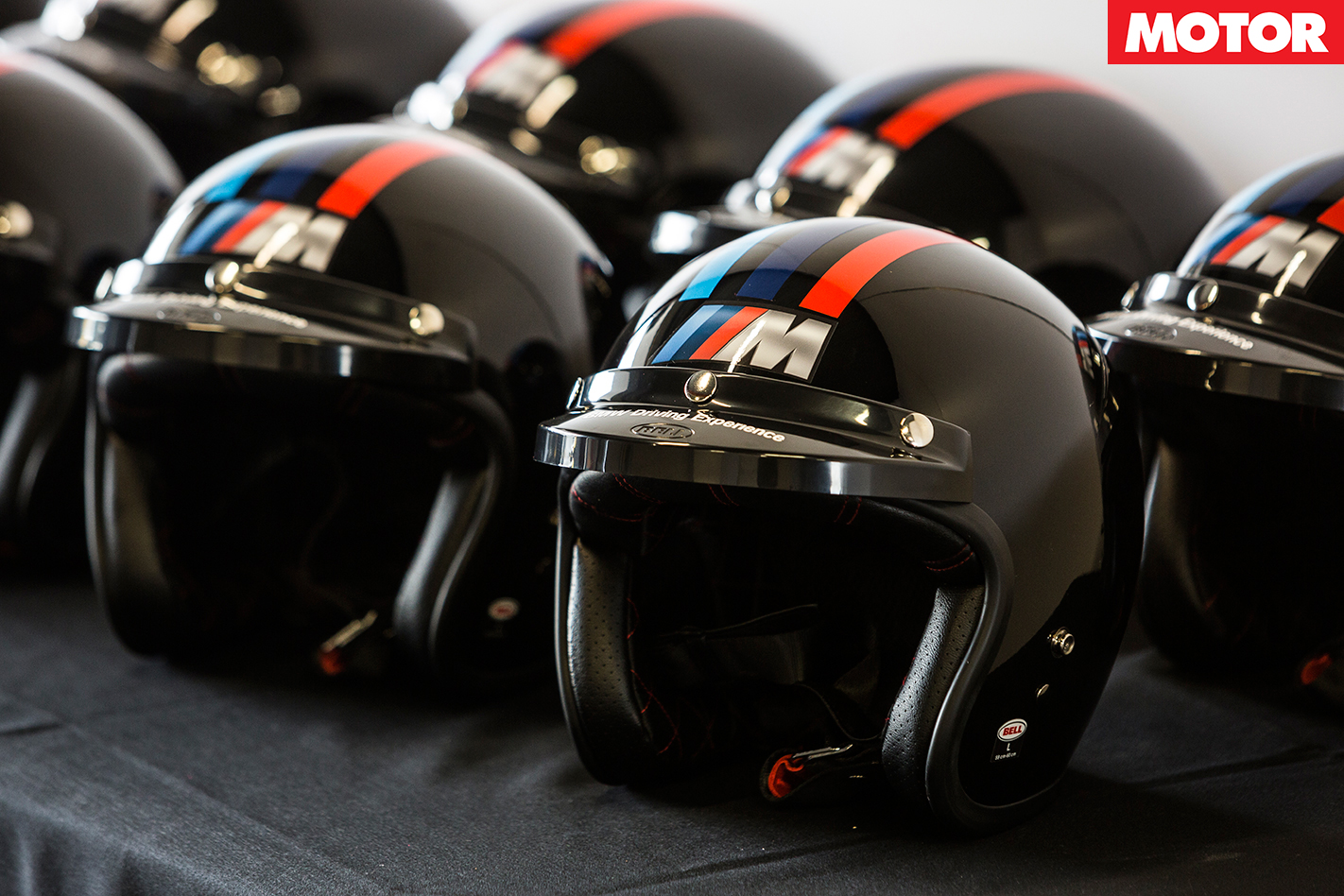 This isn’t about teaching grannies to suck eggs, but more to get everyone focused on the technique and application that will – quite literally – help speed up their progress. Topics include tyre physics, stopping distances and cornering behaviour.

No big egos are allowed here, though, and Walls tells us that’s virtually always the case with these events. “I think the participants realise we give them a pretty good lead,” he says. “And it’s up to them whether they pull it tight on themselves or not.”

Nervous anticipation is the prevailing mood, and that’s ratcheted up a couple of notches with Walls’ revelation that there will be a timed motorkhana during the day. “This puts the pressure on,” he tells the group. “It brings out the competitive edge you may not have thought you had at the start of the day.” 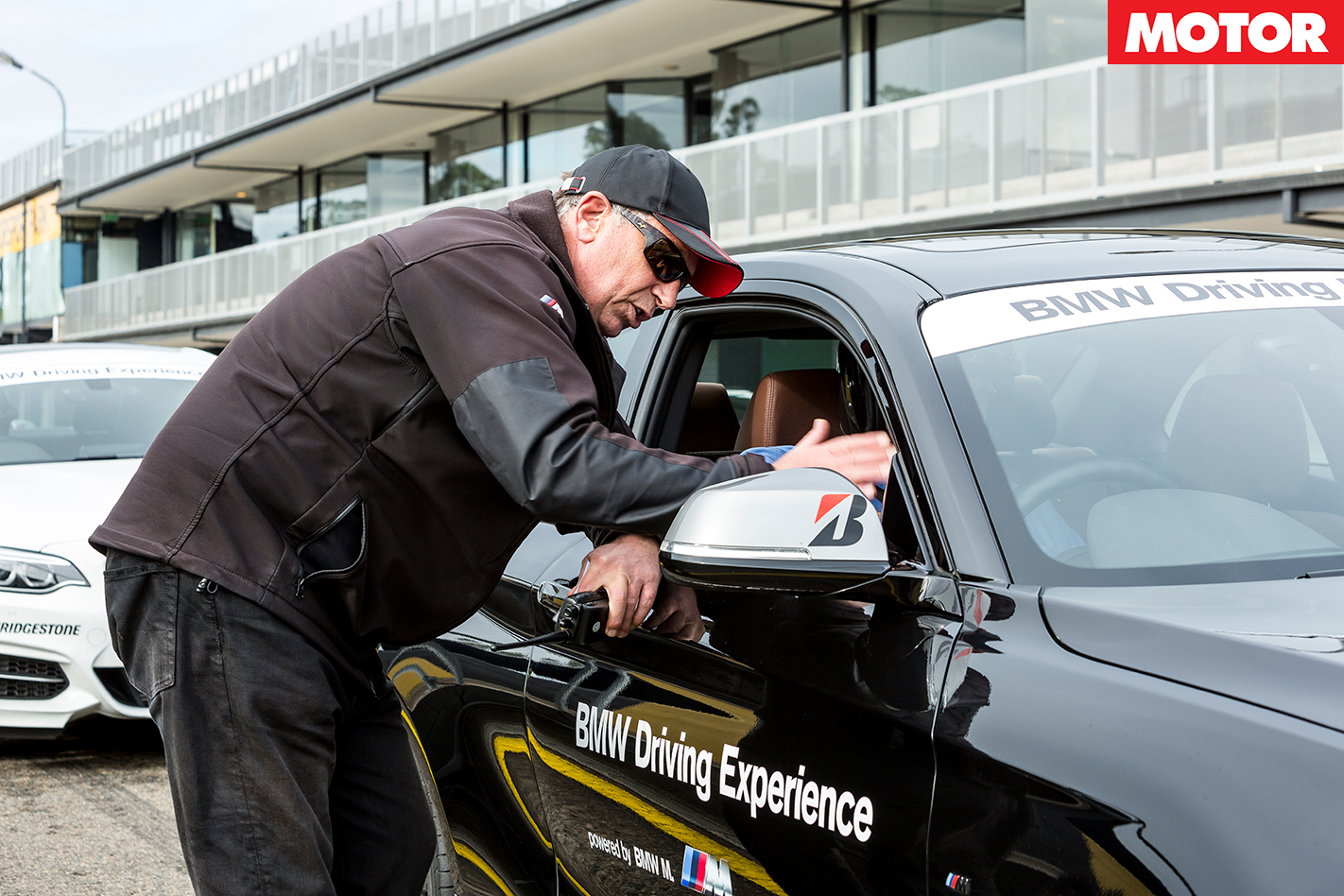 First up, we put in a few laps behind a pace car driven by one of the instructors. The instructors set an initial pace and monitor their group of four vehicles immediately behind (with two other groups spaced out on the track at the same time), offering advice via radios on braking points, apexes and racing lines as we circulate.

Once the instructors are comfortable that the pace can be maintained within the boundaries of abilities, the tempo is gradually increased. If one group turns out to be faster and catches one of the other convoys, either an overtake manoeuvre is orchestrated, or the faster group takes one of SMSP’s shortcuts to find an empty section of track.

For the first couple of sessions, we’re behind the wheels of an M3 and an X6 M. The M3 is in its element on a racetrack, and the X6 M is surprisingly not out of its depth at high speed. 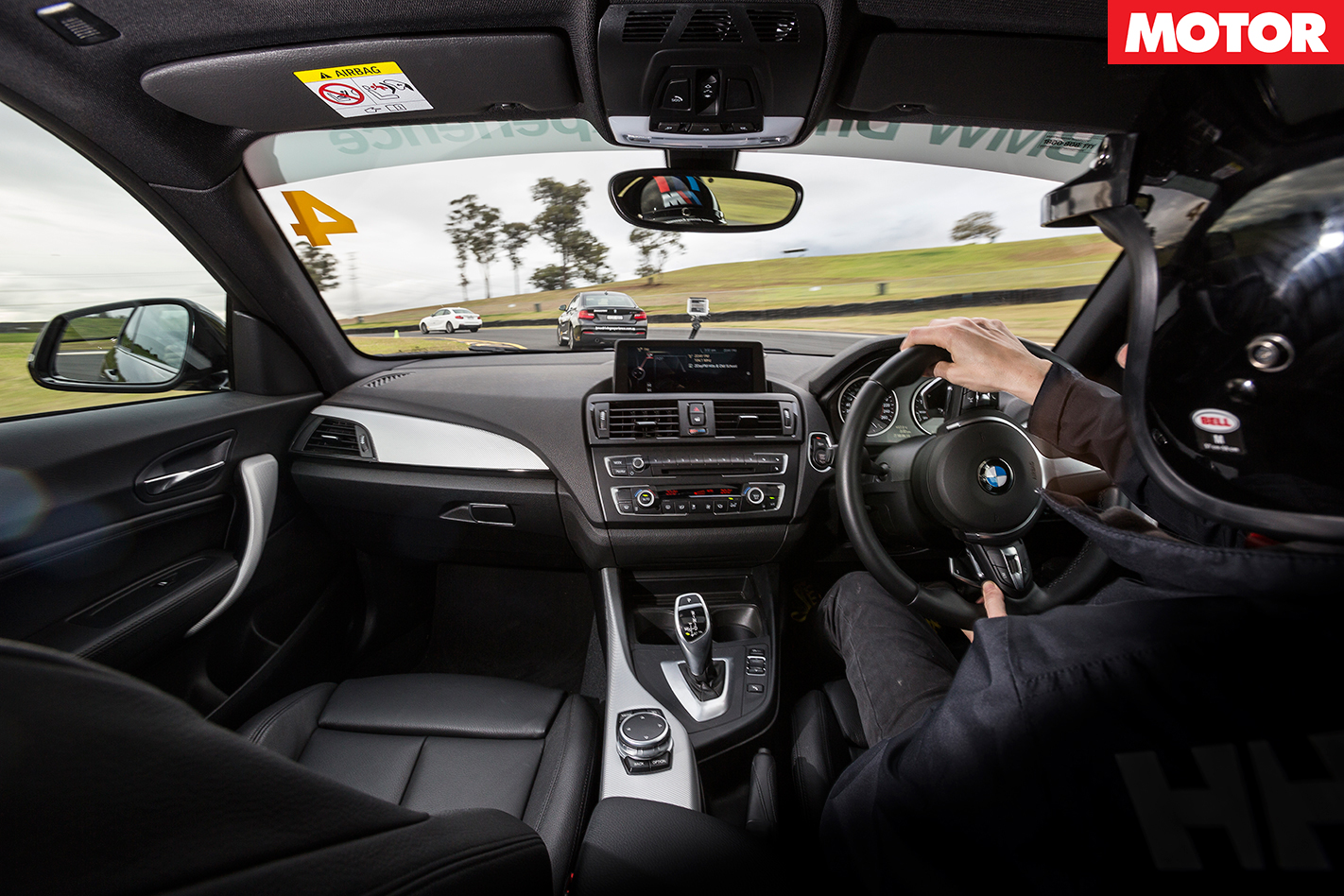 Its two-tonne mass means there’s initial lag to be found from the twin-turbo V8 – more so than the M5 or M6 – before it lets rip with thunderous results. Its two storey height (relatively speaking) also means it leans more noticeably than any of the other M vehicles assembled. The X6 M’s turn-in and cornering poise are still highly credible, though.

Back in pit lane provides a chance to see how our lucky readers are travelling. It’s already clear there are plenty of decent steerers (which will hardly come as a surprise to fellow MOTOR-heads).

Brian Moller is among them. His surname not only sounds German, but he’s clearly something of a BMW aficionado. He’s owned a 125i and a 135i, and he currently owns an E92 M3 and an M235i. And he has an M2 on order – a revelation that causes the BMW communications person within earshot to grin broadly, as the model, a worst-kept secret, is still to be officially confirmed. 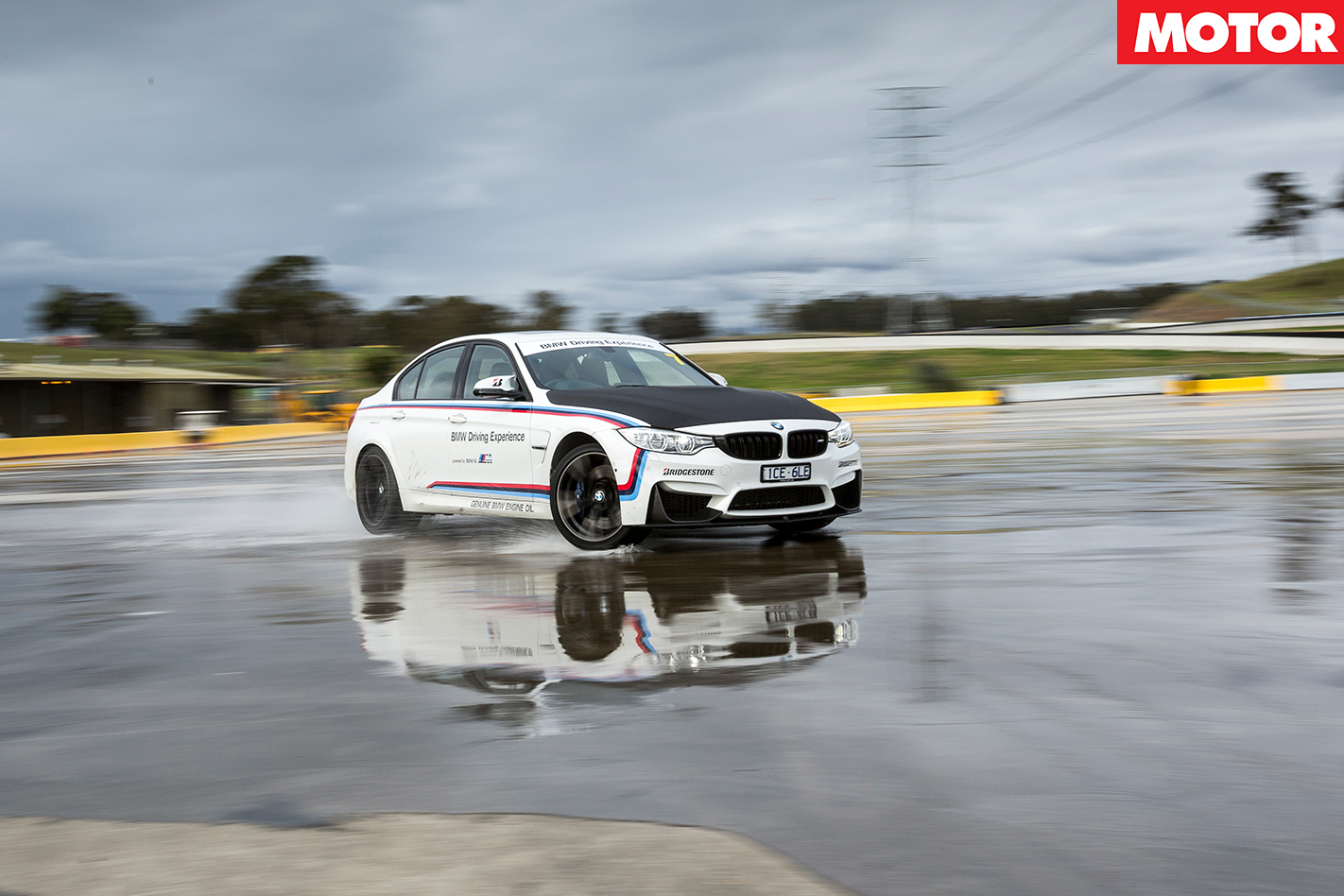 “Coming to these things you always learn about skills: how to drive better, how to brake better… the whole gamut of driving, particularly these types of performance cars,” Moller says, now onto his sixth driver day.

“The day is full of exciting, different challenges. It doesn’t matter how many times you do these, you never get bored.”

David McCallister currently drives an HSV GTS, but won our comp with an entry based on his experience of driving an E90 M3 around this very track a few years ago. 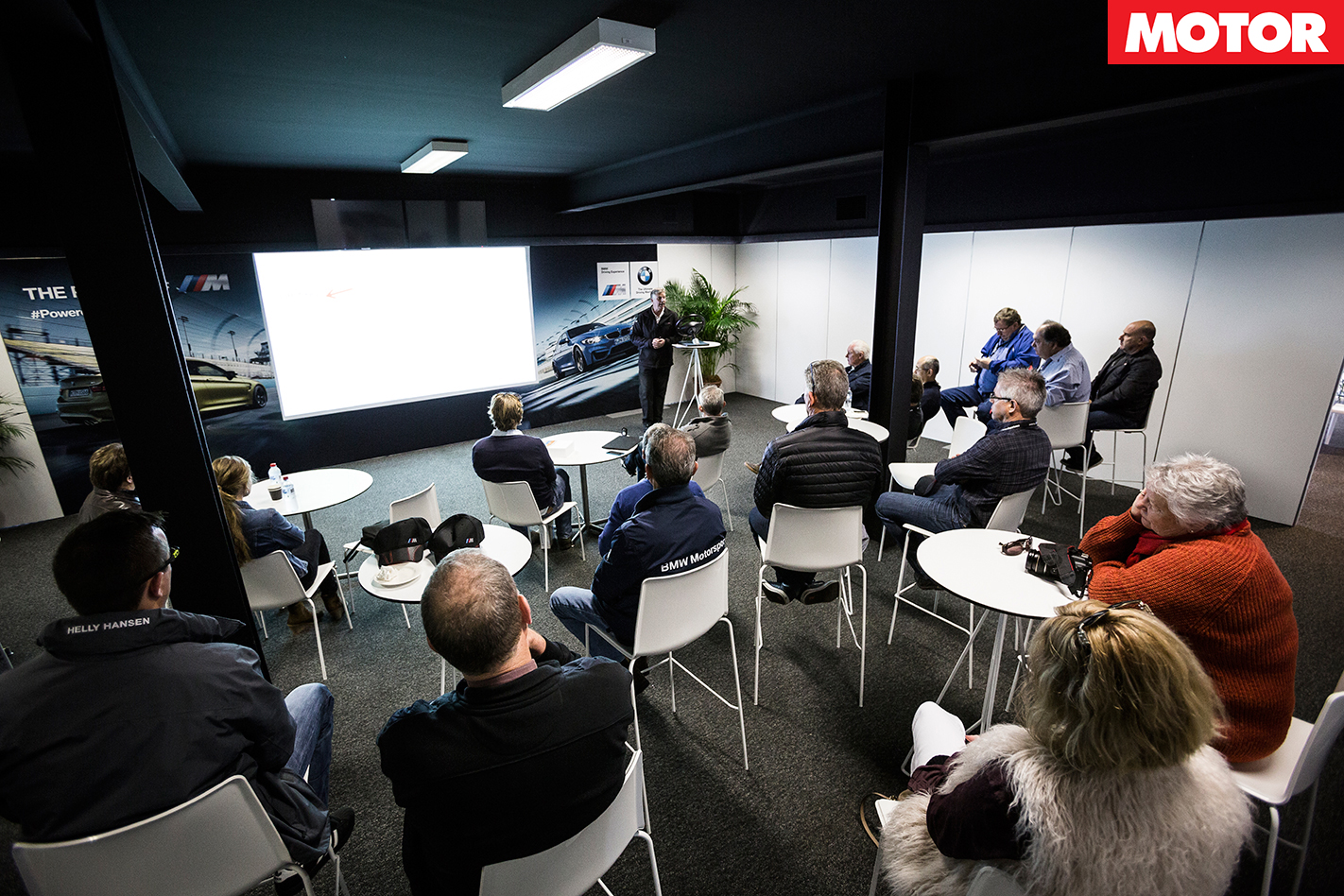 “I’ve been around here a number of times, so I know the track like the back of my hand – but it’s still a fantastic experience,” McCallister says. “All the worries in the world are gone when you’re driving around.”

McCallister says he misses the high-revving nature of old M cars – particularly the screaming V8 of that E90 M3 – though he definitely notices the extra turbo grunt. And, although he has been considering a new C63 wagon, the M5 is “back in the picture” after driving it during one of the sessions.

The sodden skidpan is the only event where stability control can be disengaged throughout the entire day. Greater speeds and sterner tests lie in wait at BMW’s higher-level courses (see breakout), though the company’s philosophy is the same throughout: allow people to experience performance cars in the way they have been engineered to be driven. 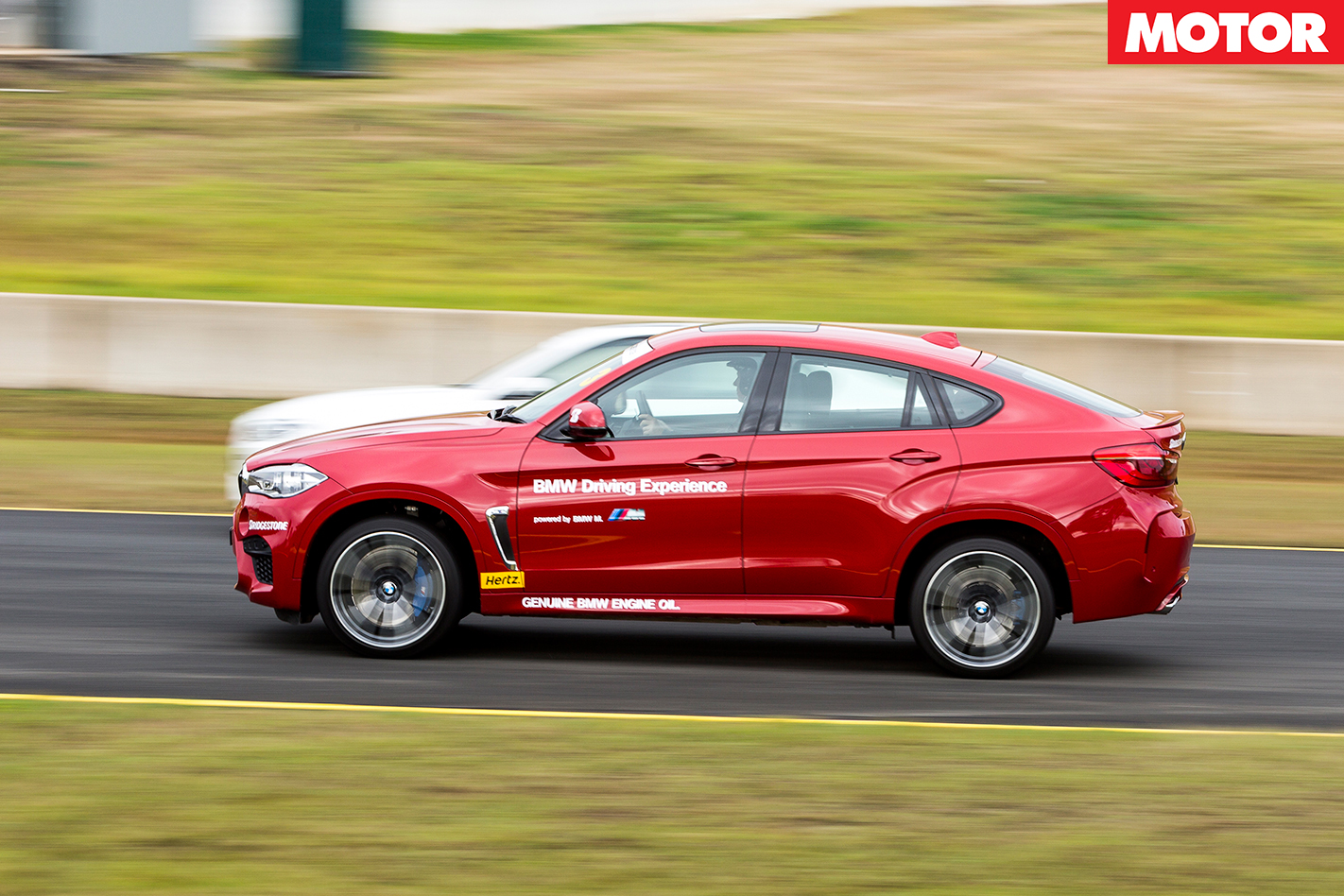 “[People] don’t often get to drive M cars to the peak of their performance with expert tuition, and I think people really engage with that,” says BMW’s Nick Keen. “They enjoy driving these cars to their limits – or at least their limit – to test their skills.”

Keen says while the programs help sell cars, there are still benefits of preaching to the converted – notably helping to validate a buyer’s decision to spend more to get an M car (a purchase that is accompanied by a free Driving Experience voucher).

“Performance isn’t what surprises people, it’s more the control you can have in an M car – say a 435i compared with an M4 – and the difference in the quality of the engineering.” 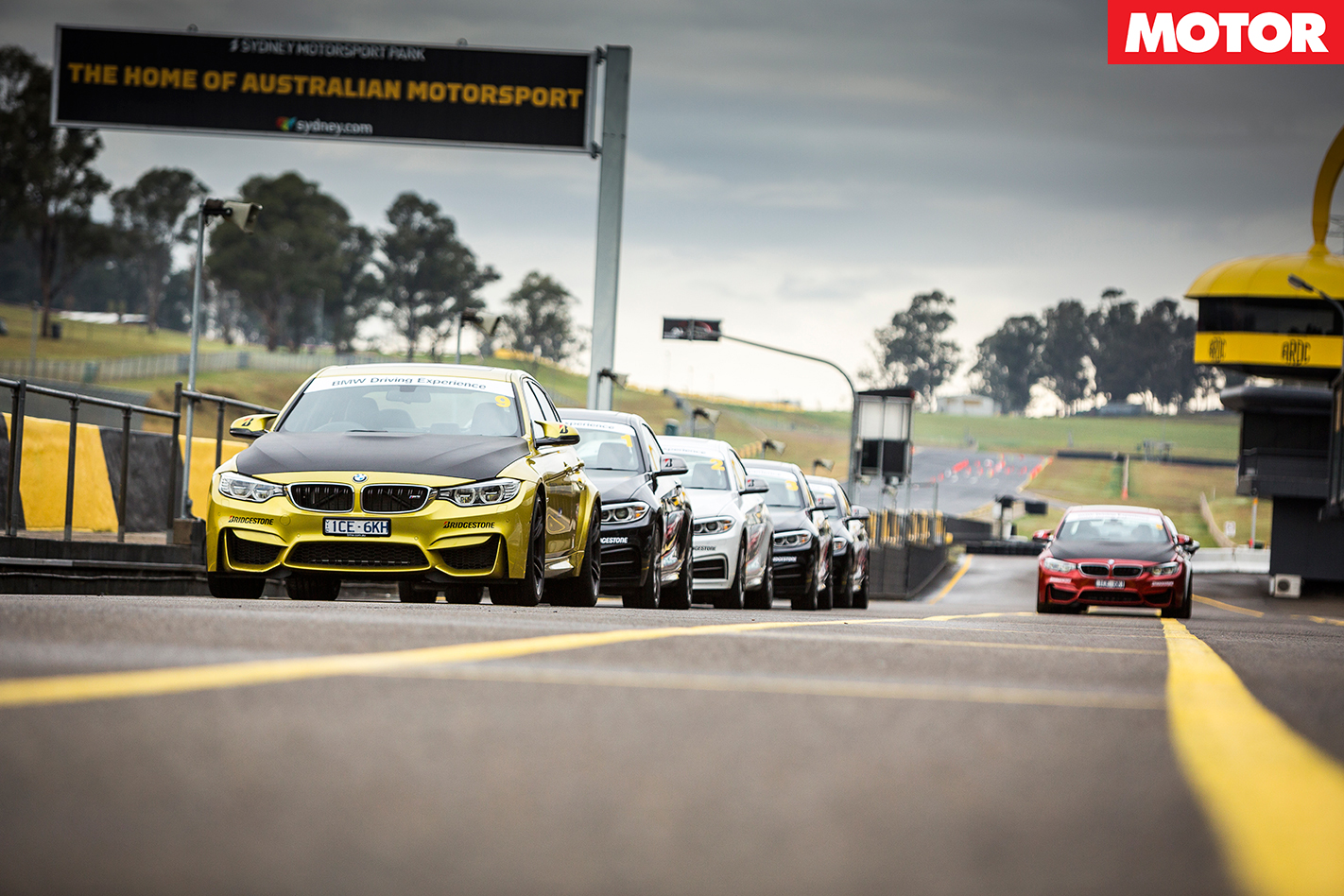 In case the punters don’t quite get to fully appreciate the abilities of the M cars during their drives, the hot laps with instructors at day’s end soon remedy that. Customers quickly find the experts are more interested in burning rear rubber going sideways than setting the stopwatch on fire.

M3s and M4s are used, though the M235i seems to be a widely held favourite among the group. It’s our pick, too. While it may not be the quickest car here, the grunt is still respectable, and it makes an agreeable racket in the process. But in terms of driver involvement, it feels the most alive beneath you.

As the instructors file into pit lane, darkness descends on Sydney Motorsport Park. A throng of newly-made Ricciardo clones stagger out of the M cars with split-watermelon grins. Perhaps it’s not so bad being a driver in Australia – you just need a racetrack, an M4, and somebody else paying for the tyres.

THE BMW Driving Experience roadshow has been running since ’98 and now takes to the track about 90 days of the year. By the end of 2015 it’s predicted to have instructed about 3000 punters. It’s a sizeable logistics operation that has more to do with marketing than profit.

The mid-level course above Intensive is M Dynamic, which costs $1895. ‘Graduate’ from that and you can look to hone your skills in much smaller groups – either at Phillip Island with the $3500 Fascination course (booked out until 2016) or tailored high-level courses with an M3 or M4 that can be arranged via participating BMW dealers.

For something completely different, you could head to Kiwi snow for the Alpine xDrive Experience. For more details, head to BMW Driving Experience Australia. 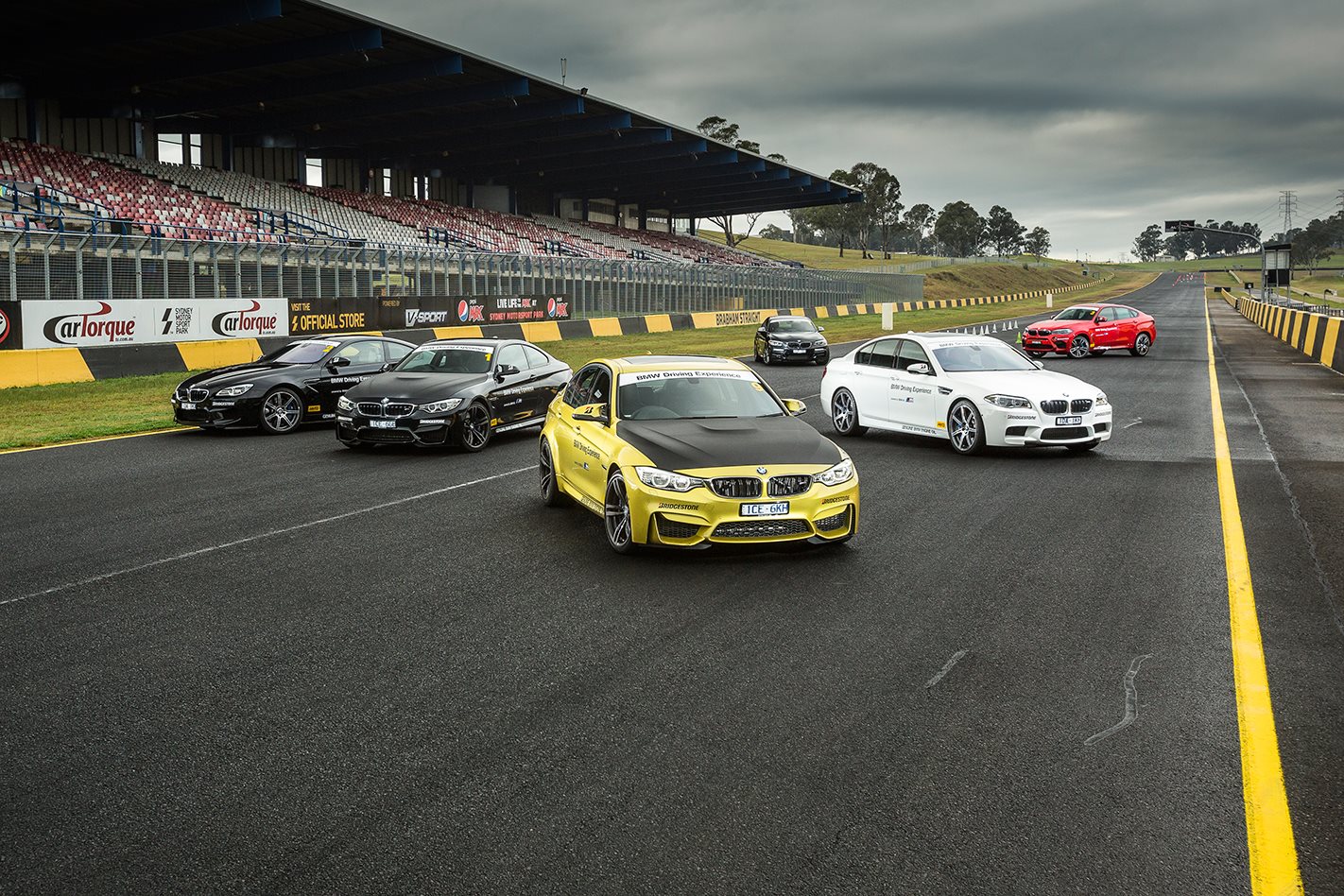 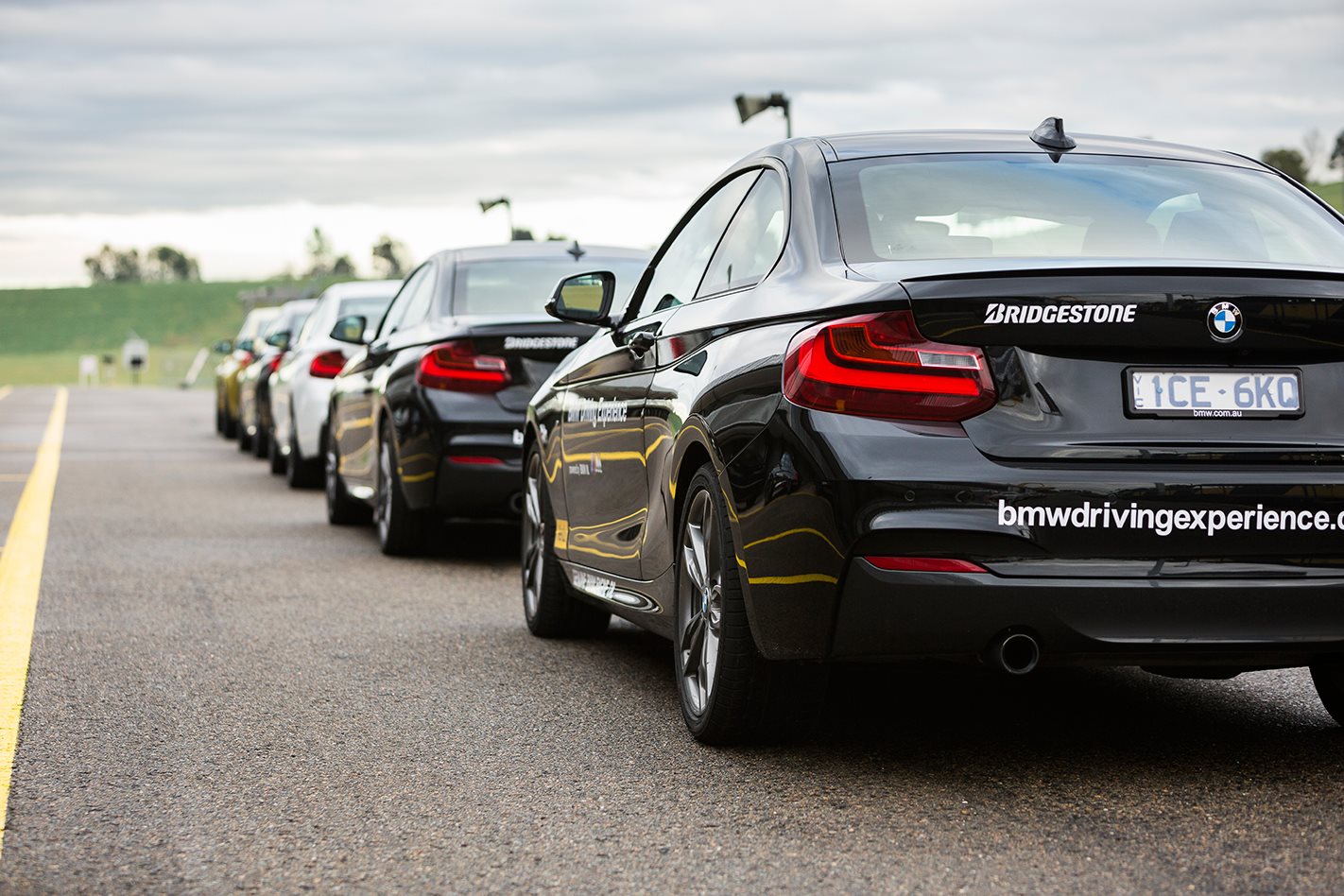 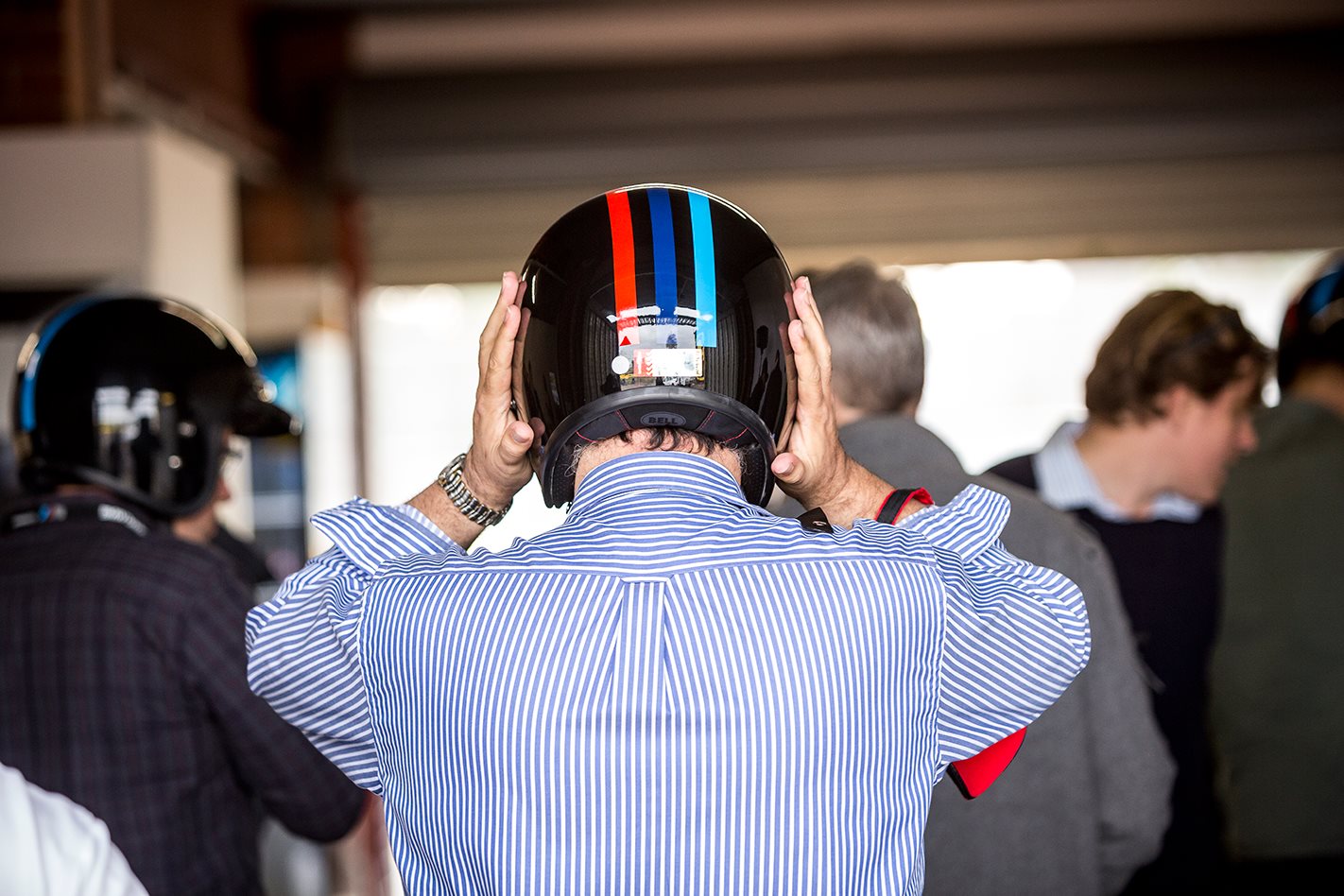 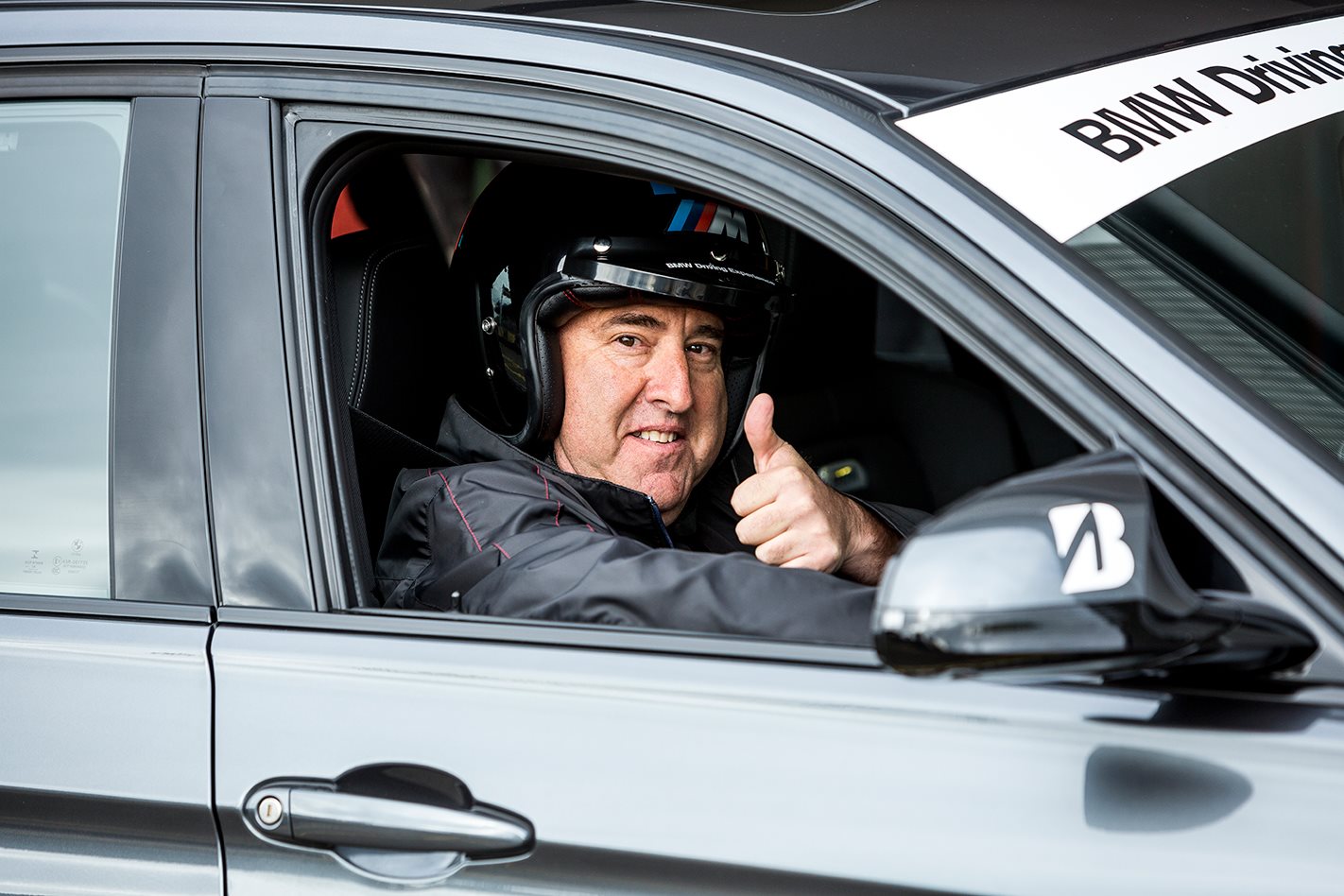 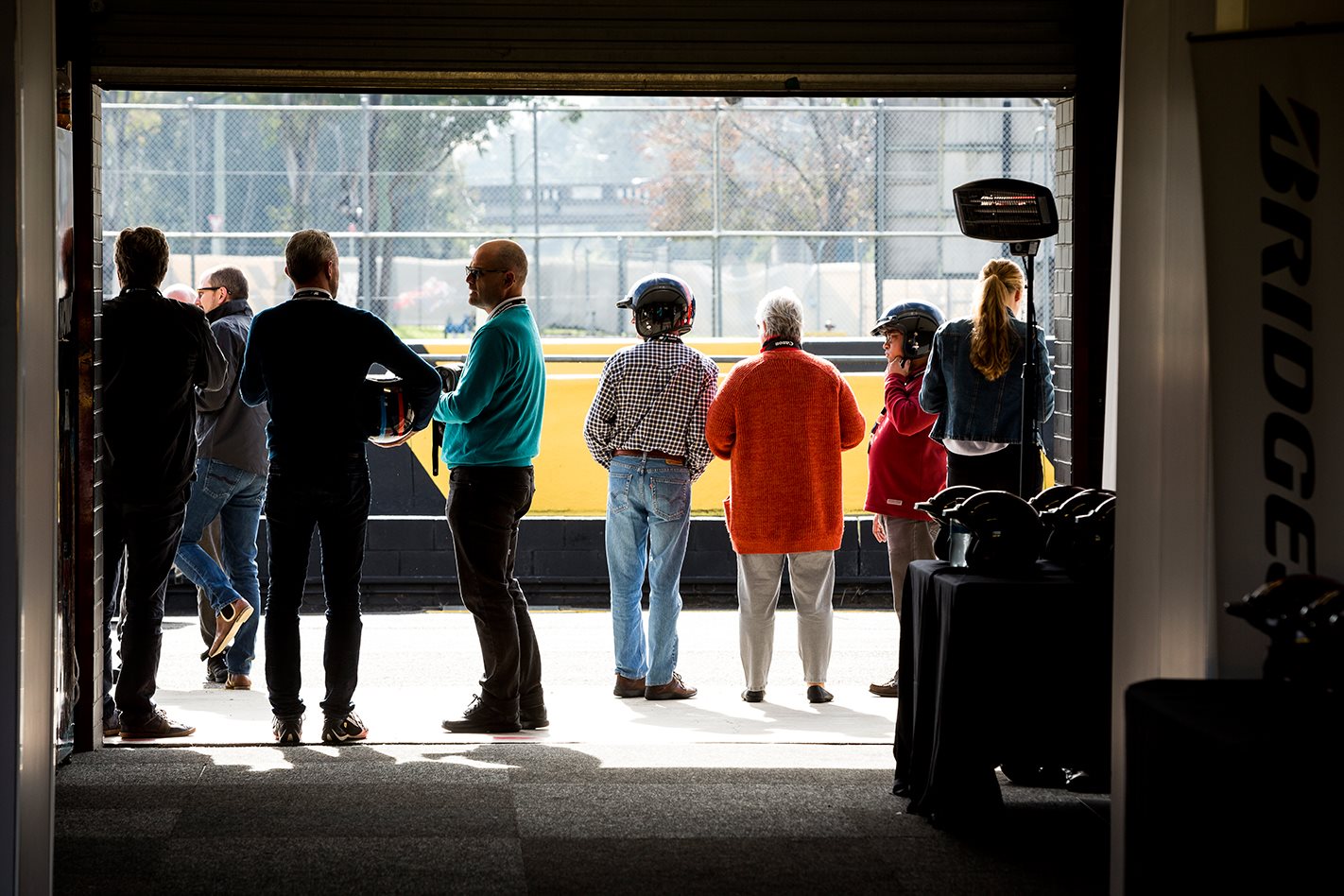 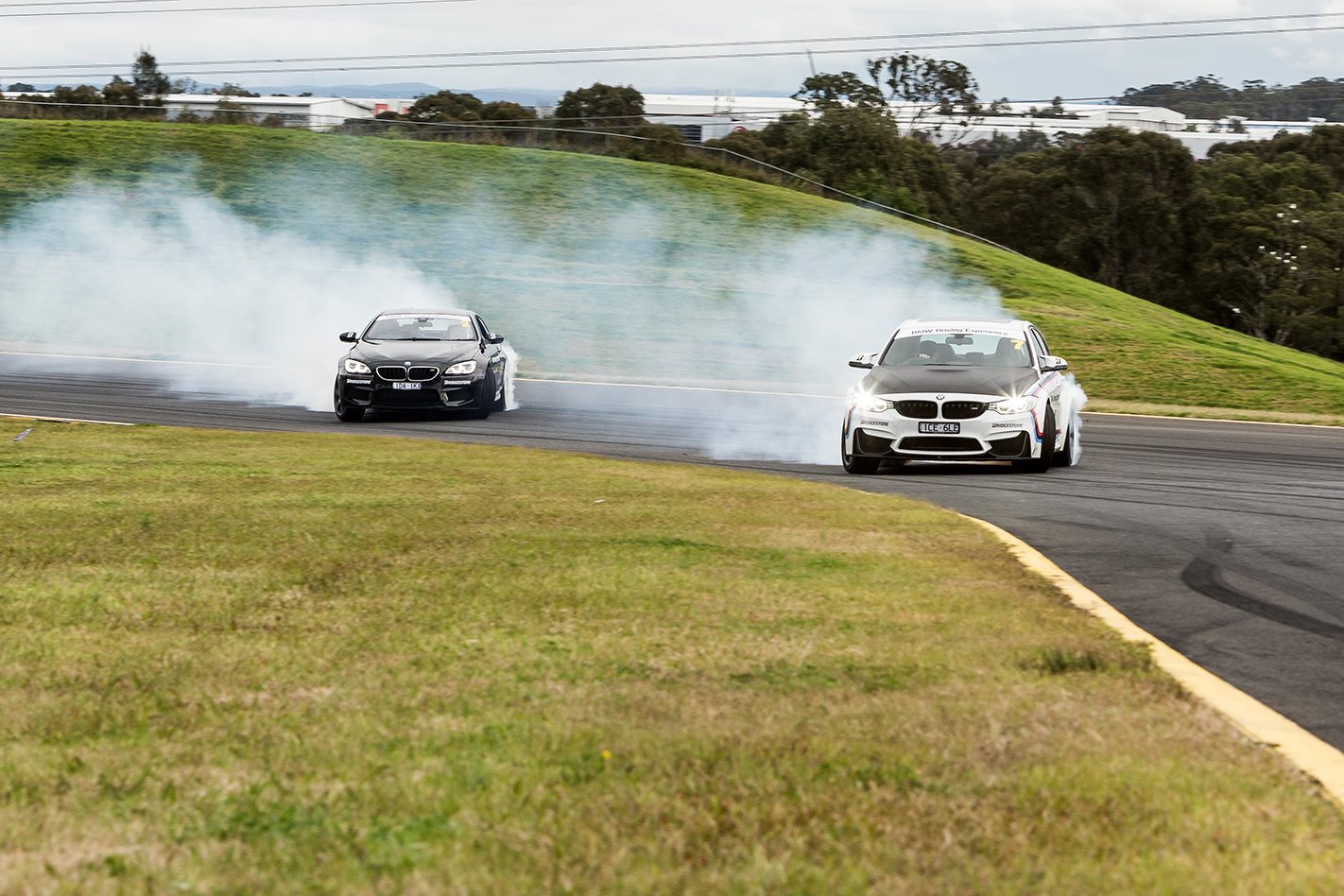 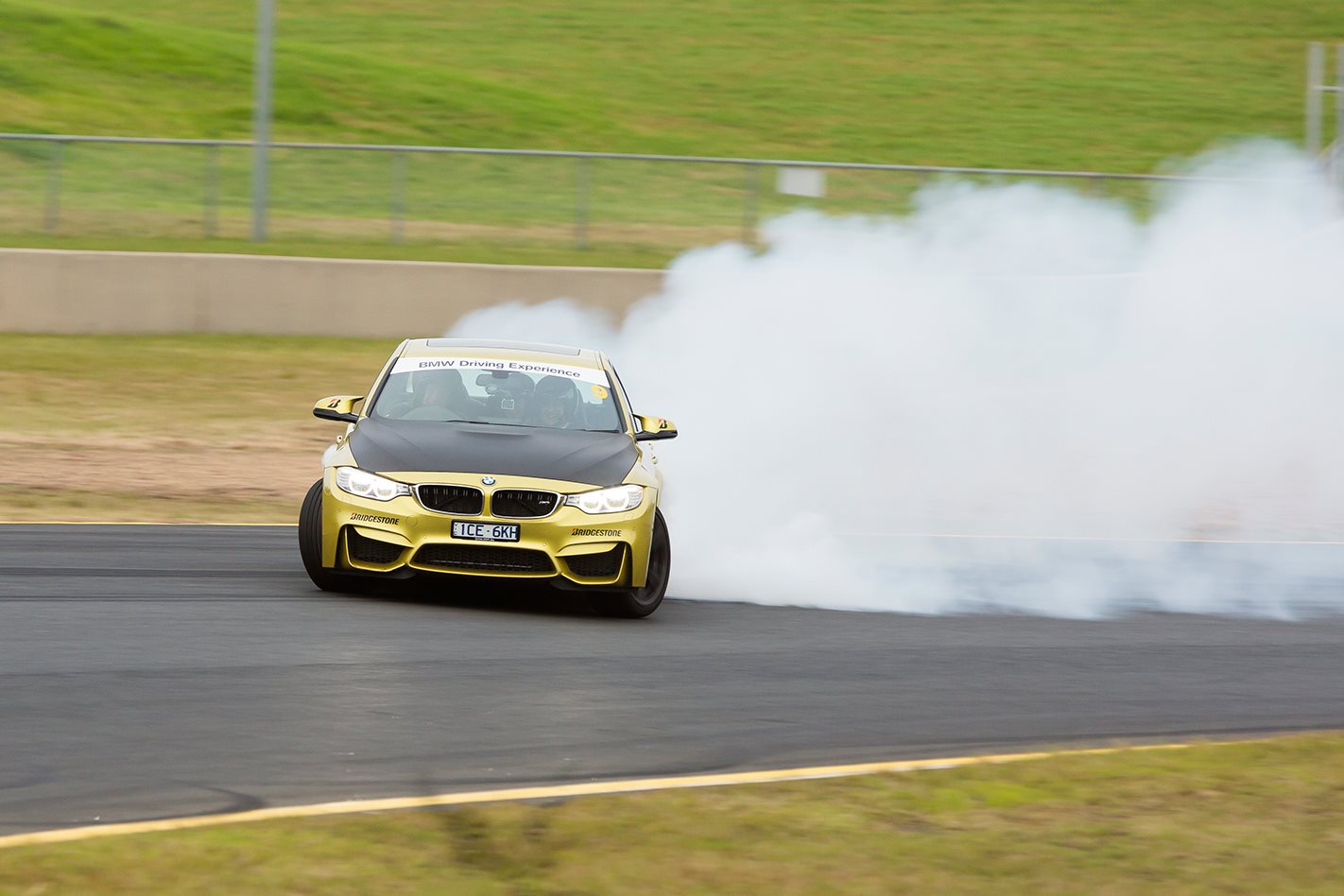