For all the airtime EVs generate; for all the discussion about charging infrastructure, environmental benefits, and whether or not they should make bleeping sci-fi noises to avoid skittling distracted pedestrians, the reality is that the take-up of EVs in this country has been minuscule.

Part of that, of course, has been lack of affordability. Our COTY winner of 2014, BMW’s i3, while excellent in many ways, is really an urban runabout. And a premium one at that, courtesy of a $64,000 sticker. Tesla, meanwhile, has focused even further upmarket, meaning the ‘affordable’ end of the EV segment has pretty much been a black hole, with the only pinpricks of light being the 635 sales since 2012 of the first-generation predecessor of this car – the Nissan Leaf.

Now, with an August on-sale set for the ZE1 Leaf II, and other rivals rolling out from Hyundai and Kia, the talk of the impending EV wave continues to gather volume from both industry and observers. But is Australia ready to surf it? According to what we found in our EV and hybrid megatest in our 2018 Yearbook edition, the answer from dep ed Andy Enright was a flat no. The cover line of that issue – ‘The truth about electric cars, and why Australia isn’t ready’ – struck a chord with you, our readers, and saw us cop plenty of sprays from those in the business of pushing the EV bandwagon.

So why are we back again now?

Two reasons. The Leaf is the world’s best-selling EV, and Nissan, in partnership with energy provider ChargePoint, reckons that by the time it’s on sale mid-year, there will be sufficient charging infrastructure to make range anxiety a hiccup from yesteryear. But while we knew we were jumping the gun on that, this was still a chance to take the Leaf out of its urban comfort zone well ahead of its official launch.

In terms of destination, a visit to a couple of renewable energy providers seemed logical. It’s all fine to wear ‘zero emissions’ badges, as the Leaf does, on its flanks and rump, but if the energy used to charge it is coming via the burning of fossil fuel, surely those decals need an asterisk: *at least not at the tailpipe.

But beyond that is the true big picture; one where the debate about delivering on Australia’s energy needs and the reality of what our politicians are doing actually intersect. So first stop for us would be the Taralga Wind Farm in the southern tablelands of NSW, to check out the 51 wind turbines that have been producing zero-emissions energy since the massive blades started turning in 2015.

From there, we planned to drive into the ACT to visit Australia’s largest solar farm, in Royalla, around 30km south of the nation’s capital. Wouldn’t it make a great drone photo, I thought, to picture the white Leaf nestled in among some of the 83,000 photovoltaic panels staring hungrily up at the sun?

But more important was to try to better answer the core question: are these two renewable sources, as trumpeted by the environmental lobby, really the low-CO2 solution to Australia’s increasing energy demands?

All we needed was a basic itinerary that linked recharging stops in a loop out of Sydney and back, and of course a schedule that allowed the required time for those electrons to flow. How hard could that be?

ANALYTIC THINKING and strategic planning have never been my strong suit. If you’re looking for someone to plot, say, an invasion of Indonesia, then I’m probably not your guy. Even when it comes to road trips, a large part of the enjoyment for me comes from being unplanned; to just wing it, follow your nose, enjoy the route that life throws at you, and figure out the eating and sleeping stuff on the fly. This
is not an ideal mindset to bring to an EV road trip, especially, as we’ve established, the fast-charger ‘network’ outside the Sydney metro area is more like a bunch of random dots on a map, as opposed to a neat and logical trail of breadcrumbs.

Anyway, when we collect the Leaf near Sydney’s Mascot airport, it’s fully charged and indicating a range of 288km. This should be ample to get us to our first recharging point – a fast-charger in Mittagong, 110km away – then we’ll have no trouble for the 127km run to Taralga via Goulburn.

First impressions, then. The wheel doesn’t adjust for reach, so my optimum driving position will remain elusive for the duration. Also, this is a UK-spec evaluation vehicle, so the sat-nav thinks we’re on the edge of the Irish Sea. Australian spec cars will know exactly where you are, but you’ll need an app, via Apple CarPlay or Android Auto, to assist with your journey planning in terms of range and recharging options.

As we creep almost silently into Sydney traffic, I’m reminded again why the doubters really need to drive an EV in an urban environment before throwing around the dismissive ‘glorified golf-cart’ quips.

While there’s little pleasure to be had from an ICE powertrain in stop-start driving, the inverse is true of an EV. The Nissan’s torque of 350Nm is ample for the car to be stealthily alert, eager to zip up to speed or lunge to grab a gap in traffic, provided you’re happy to kick past the throttle indent that would seem to be there to discourage this and conserve charge.

But two other points are almost as noteworthy as the lack of engine noise: the absence of a shifting transmission, and the effects of regenerative braking. If you’ve never driven an EV, the combined effects of these two elements may be enough to sway your thinking, and convince even a hardcore ICE addict of an EV’s merits in the urban jungle. It’s the very epitome of point-’n’-shoot driving, except the shooting part happens in an aural vacuum, and you barely have to bother braking after you’ve taken the shot.

No matter how good a modern transmission is – CVT, dualclutch, torque convertor – it’s no match for no transmission at all. Okay, that’s not technically correct (EVs have a singlespeed reduction gear) but the smoothing effect of not having to kick down a gear, and eliminating the flaring of revs on an upshift, is transformational. Likewise regenerative braking, activated here by selecting the Leaf’s e-Pedal button. The system delivers up to 0.2G of retardation, meaning easing off the throttle is like a progressive application of brakes in a conventional car. Step back into an ICE car after a drive in a well-sorted EV like the Leaf – at least in an urban environment – and it feels a bit like going back to a regular toilet after using one of those clever Japanese ones that take care of all the hygiene chores.

The ride of the Leaf has a cushy compliance at urban speed, and the steering is agreeably direct and slack-free. The selectable driver information system feels logical and comprehensive. Apart from the slightly quirky toggle gear selector, it all feels as if it’s been designed to appeal to a fairly conservative mass-market audience, rather than push the buttons of tech-savvy early adopters.

As we feed into the M5 tunnel, and join the conga line of lumbering trucks and various diesel belchers in one of the most air-polluted tunnels in Australia, I hit the climate control’s recirc button like a professional fly-swatter, and take a moment to bask in the smugness that comes with the thought of not contributing to the problem. Well, not at the tailpipe, at least. But there’s potentially even more smugness for the EV owner who drives past an automotive service centre and thinks about the oil changes, new spark plugs, valve adjustments and muffler replacements they won’t ever be hit for.

A little of the smugness evaporates as we aim to sit at the 110km/h speed limit, climate control running, on the expressway headed south. As with other EVs in our experience, the predicted range doesn’t have a particularly robust grasp of actual operating conditions, so that figure and the actual distance travelled on the trip computer appear locked in a silent squabble, like a cranky old married couple over the breakfast table.

It’s clear in these driving conditions, especially as the overall gradient rises over 1000 metres in the run from Sydney to Goulburn (meaning regeneration opportunities are negligible), that the actual range is a bit less than 200km. The display on the multimedia screen helpfully suggests we’ll do about five percent better without air-con, so as it’s a mild day, we comply, and make do with cracking the windows every 15 minutes or so.

It’s a reminder that unlike ICE cars, which are at their most efficient at a highway cruise, EVs are not. Still, as we seek out the charger listed online as being at the Mittagong Visitor Information Centre, we still have 47 percent battery power remaining, having travelled 102km, so no problem. At least until we try that charger, only to find it’s not compatible with the Leaf’s CHAdeMO plug.

Salvation comes at the Mittagong RSL Club, where the shiny white 50kWh NRMA-provided DC fast-charger stands in the parking lot, like a proud soldier poised to conquer an untamed future. The two bays on each side are free, so I dig out my credit card, curious to learn how this electron-pumping saviour wants to be paid for its mobility-providing service.

What!? Not a cent? That’s right; for now at least, this particular fuel is free, as the NRMA does its bit to persuade the motoring world to consider switching to an EV. 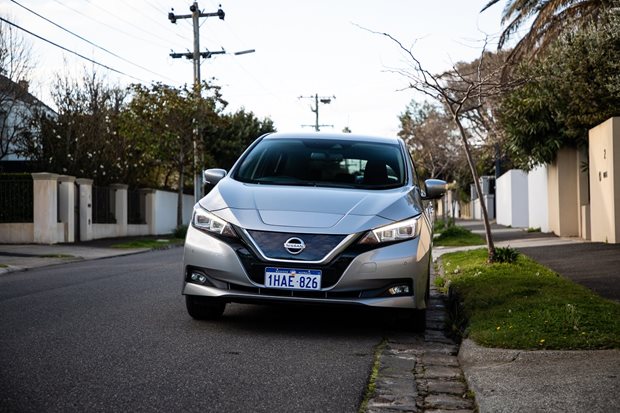 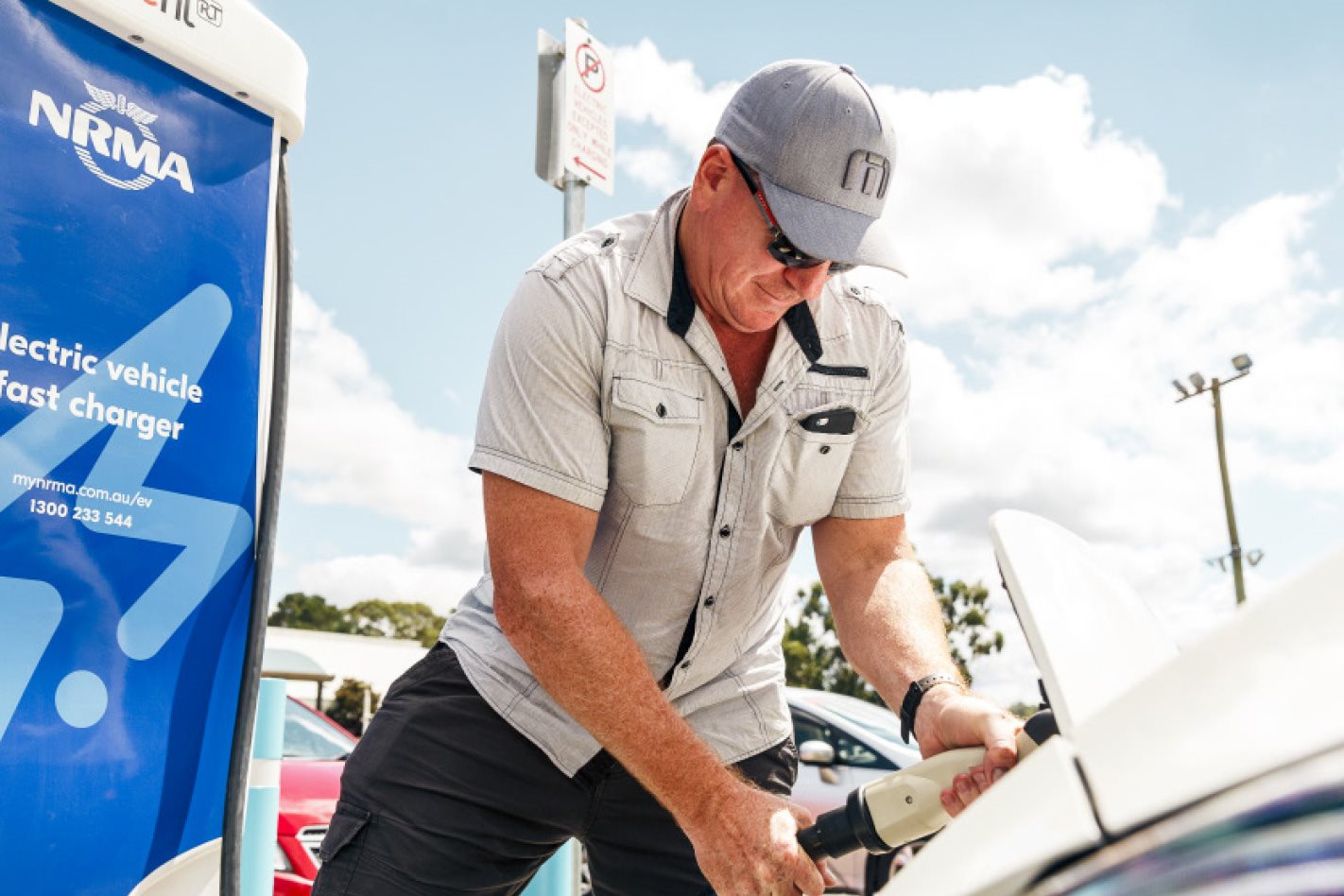 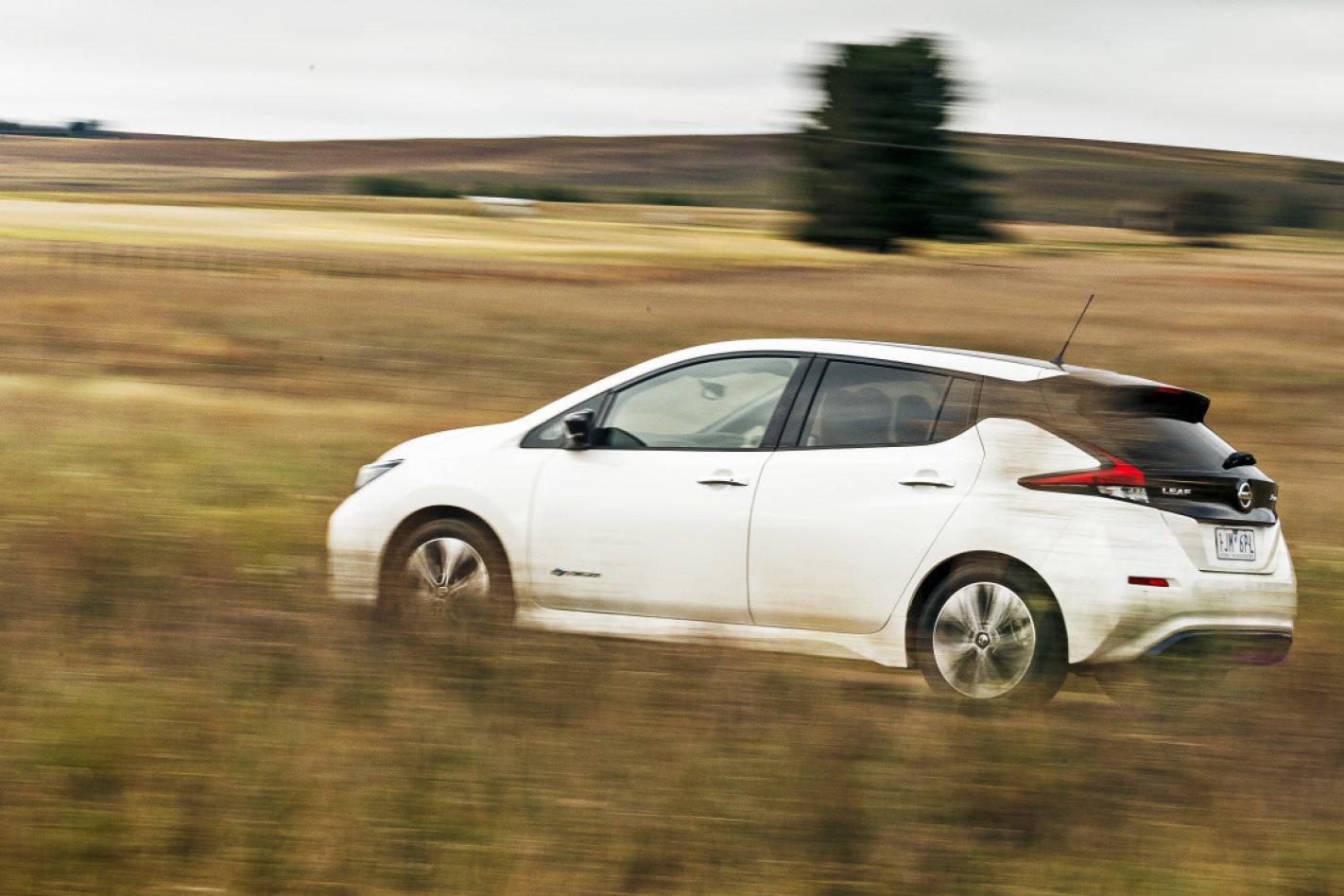 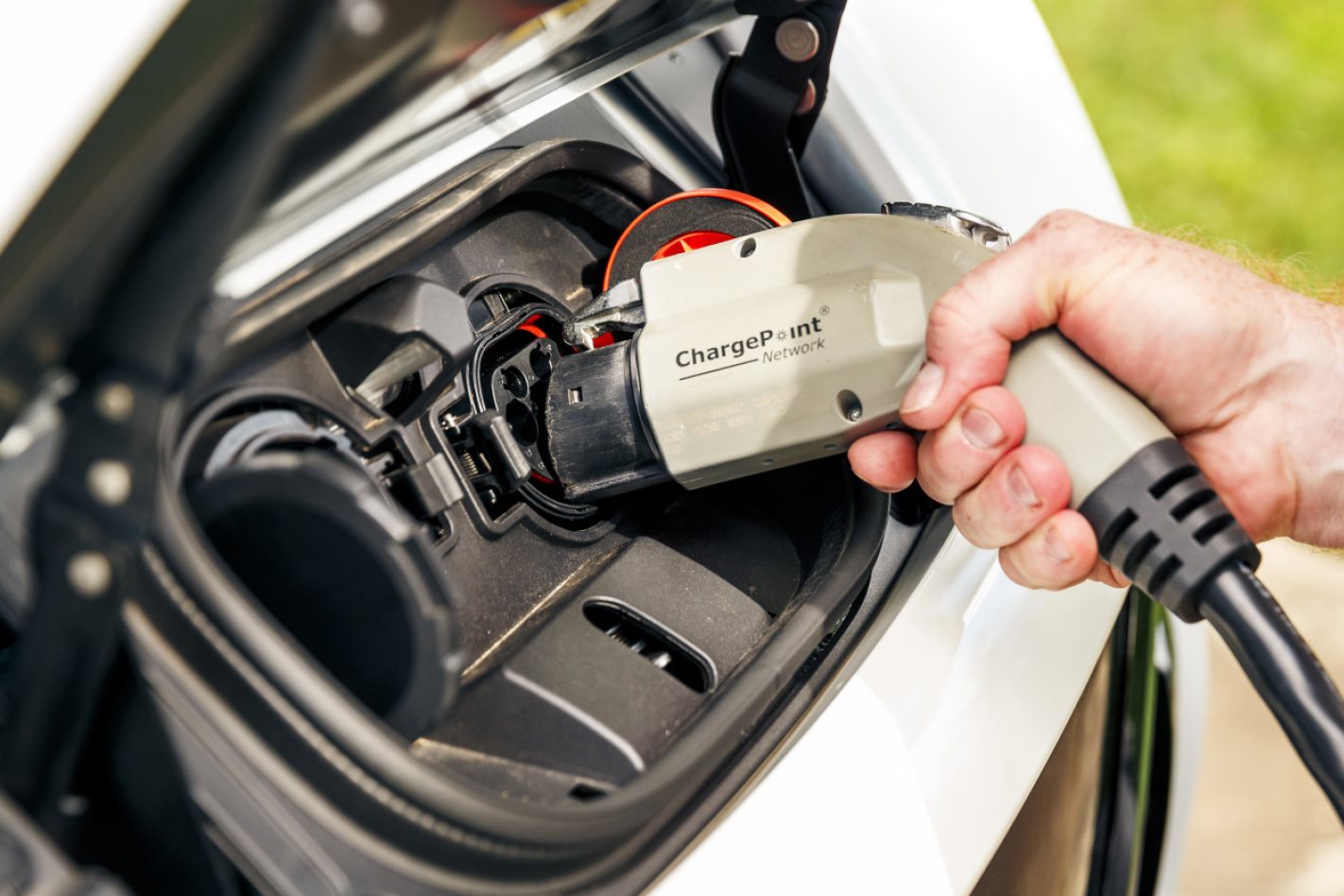 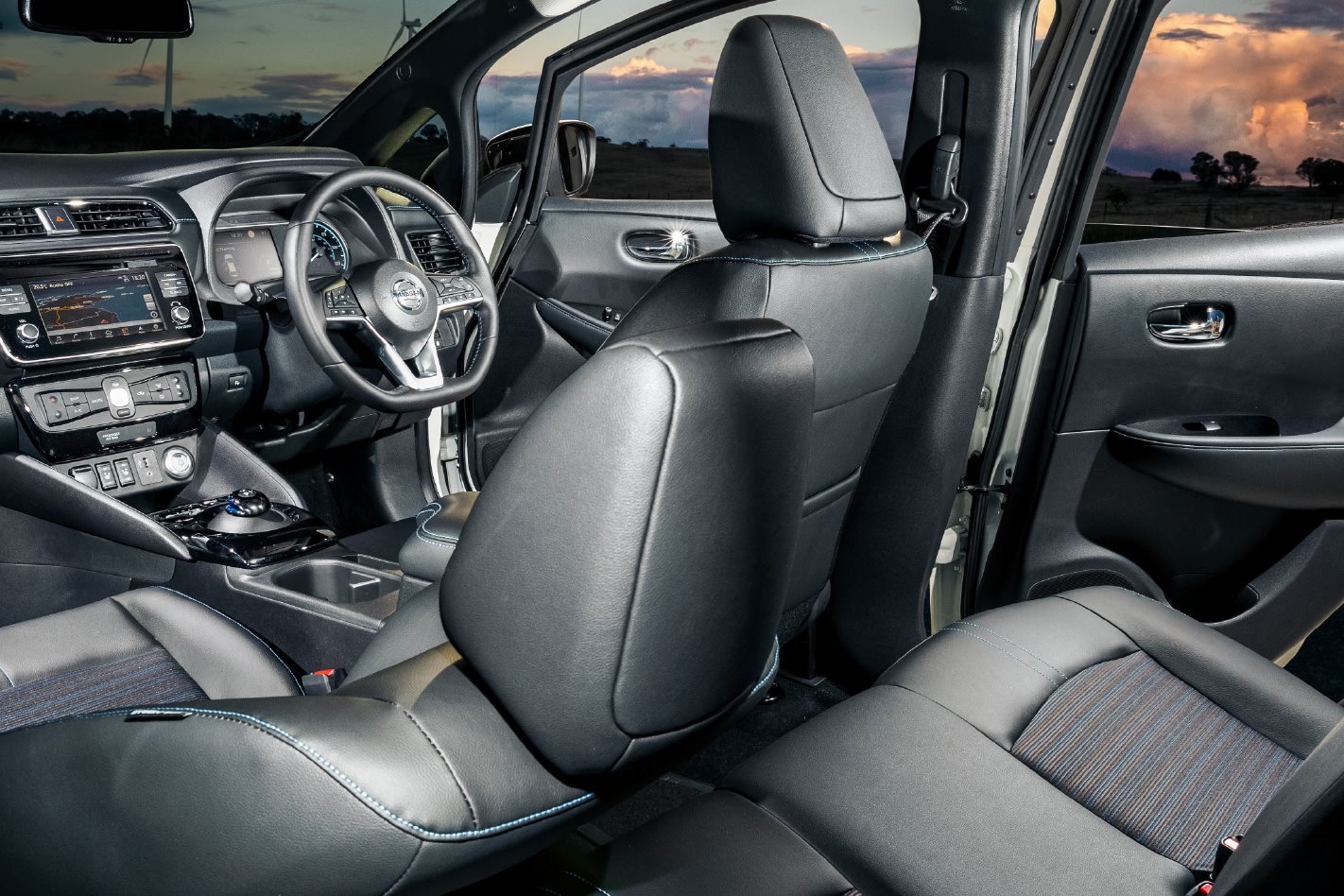 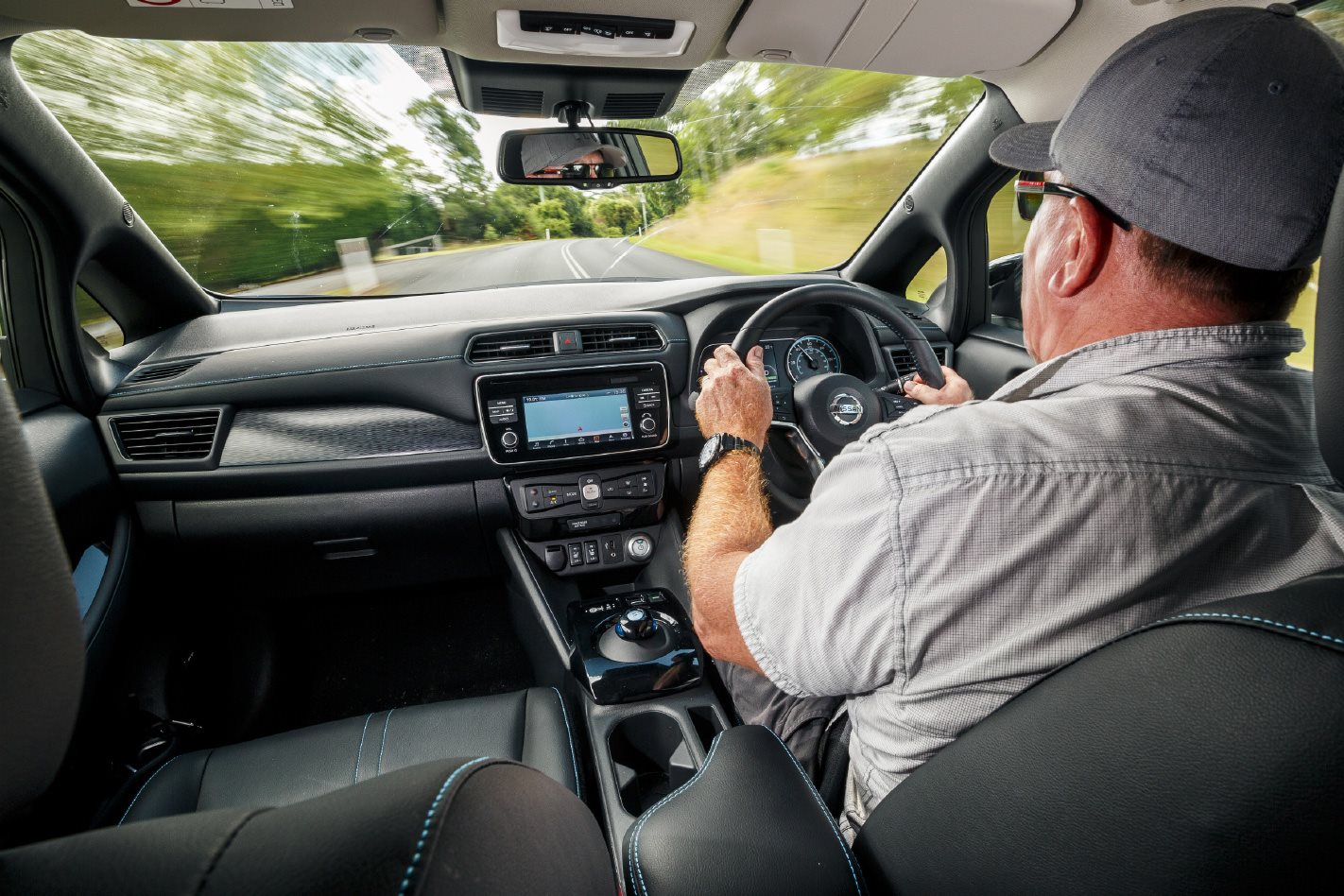 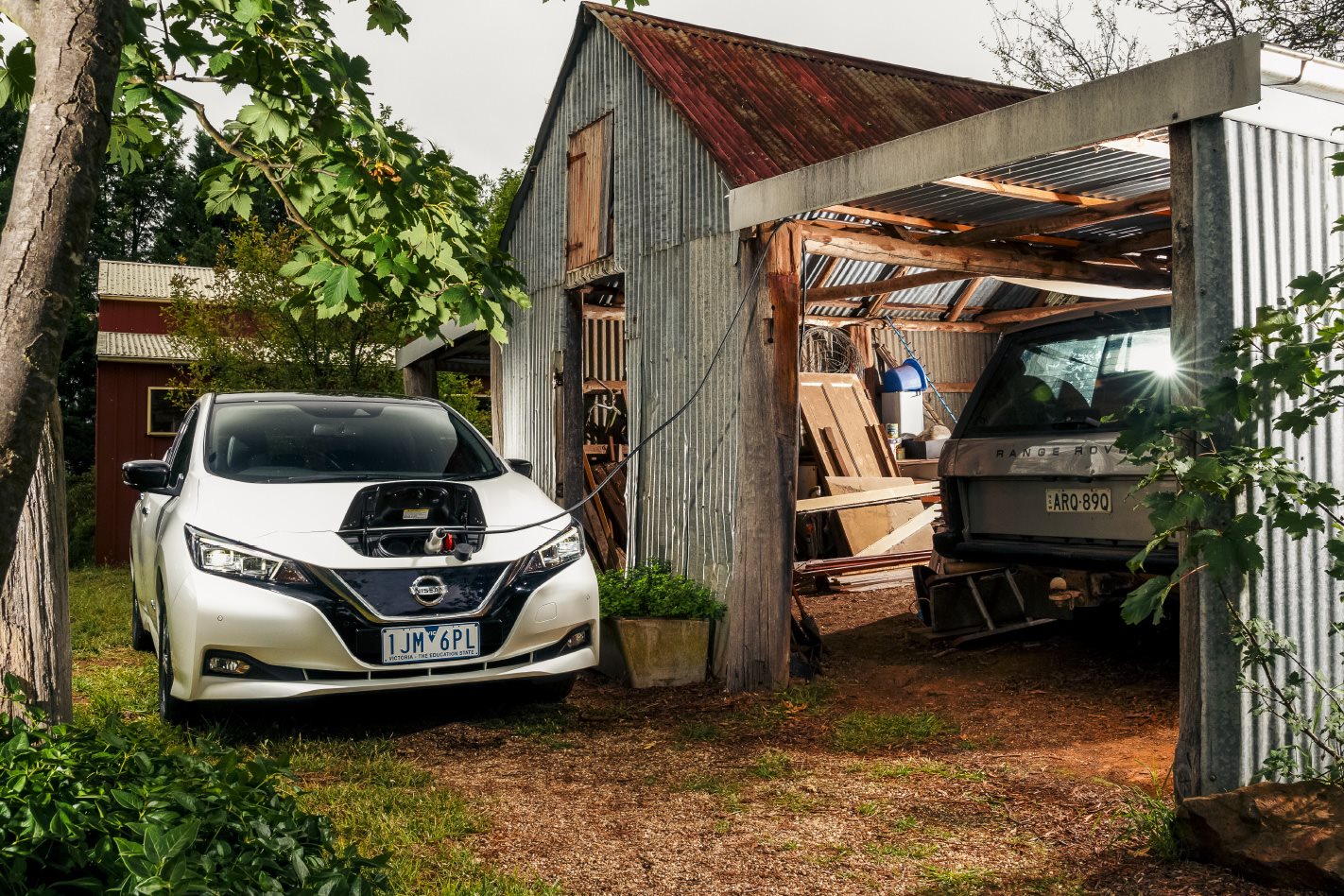 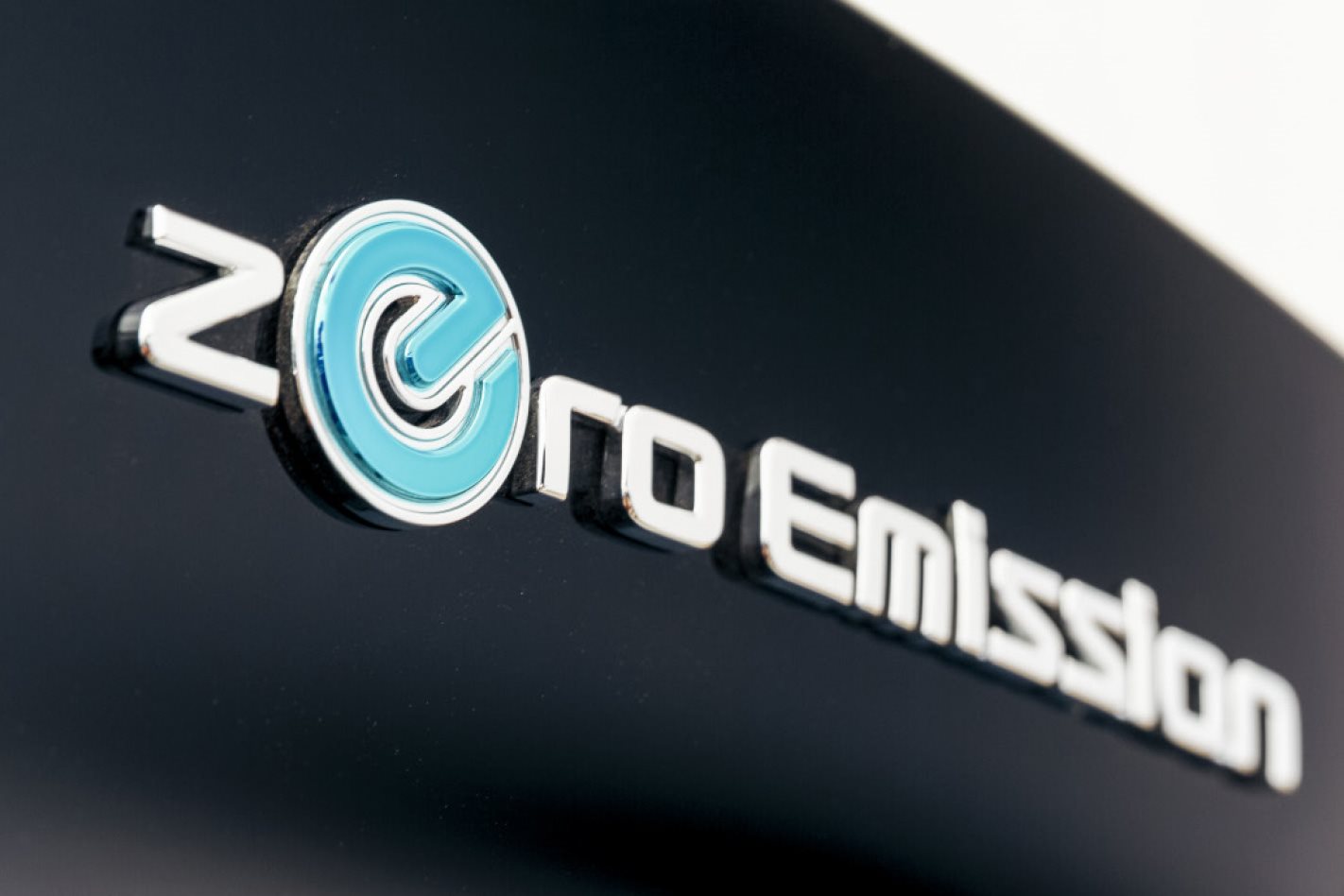 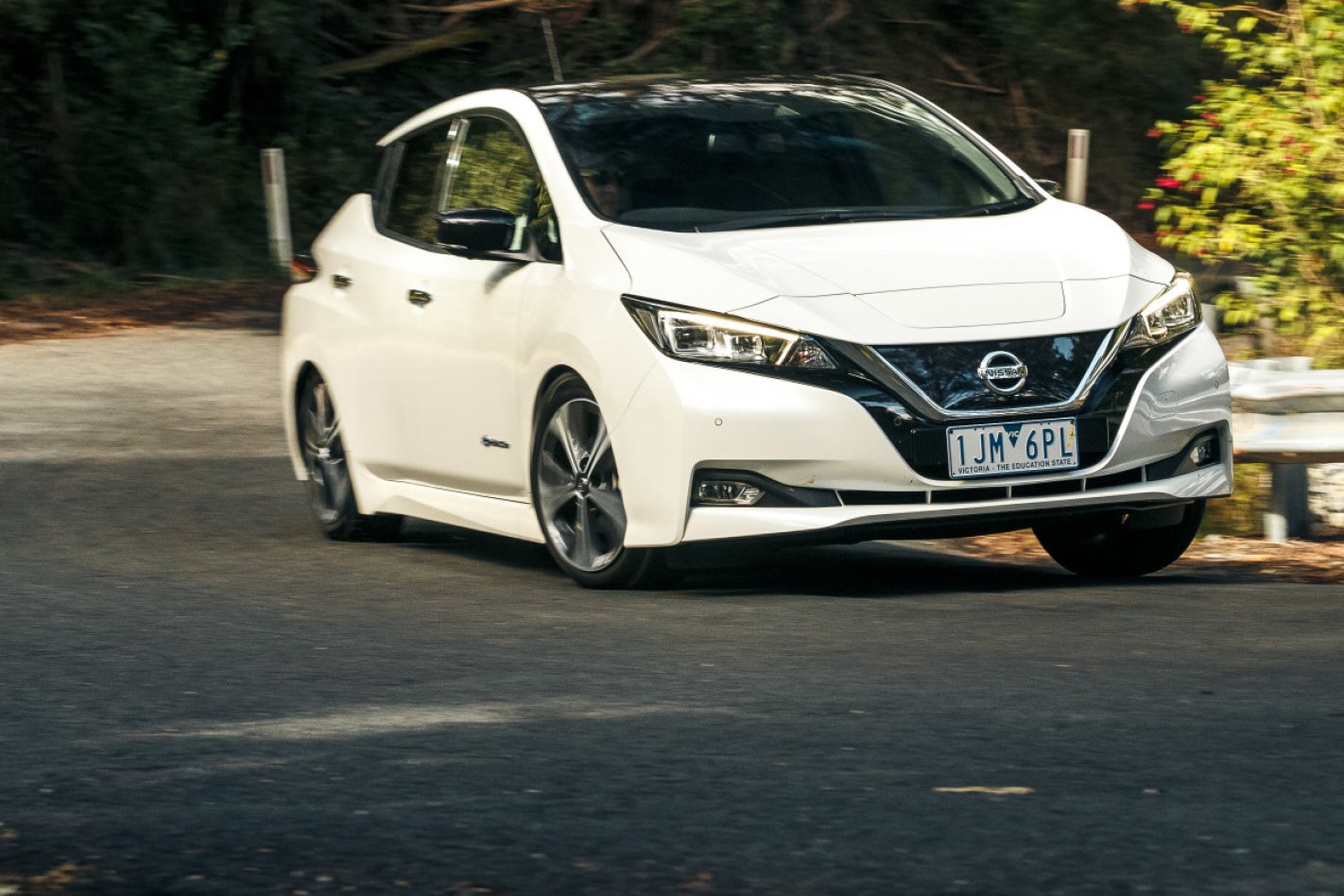 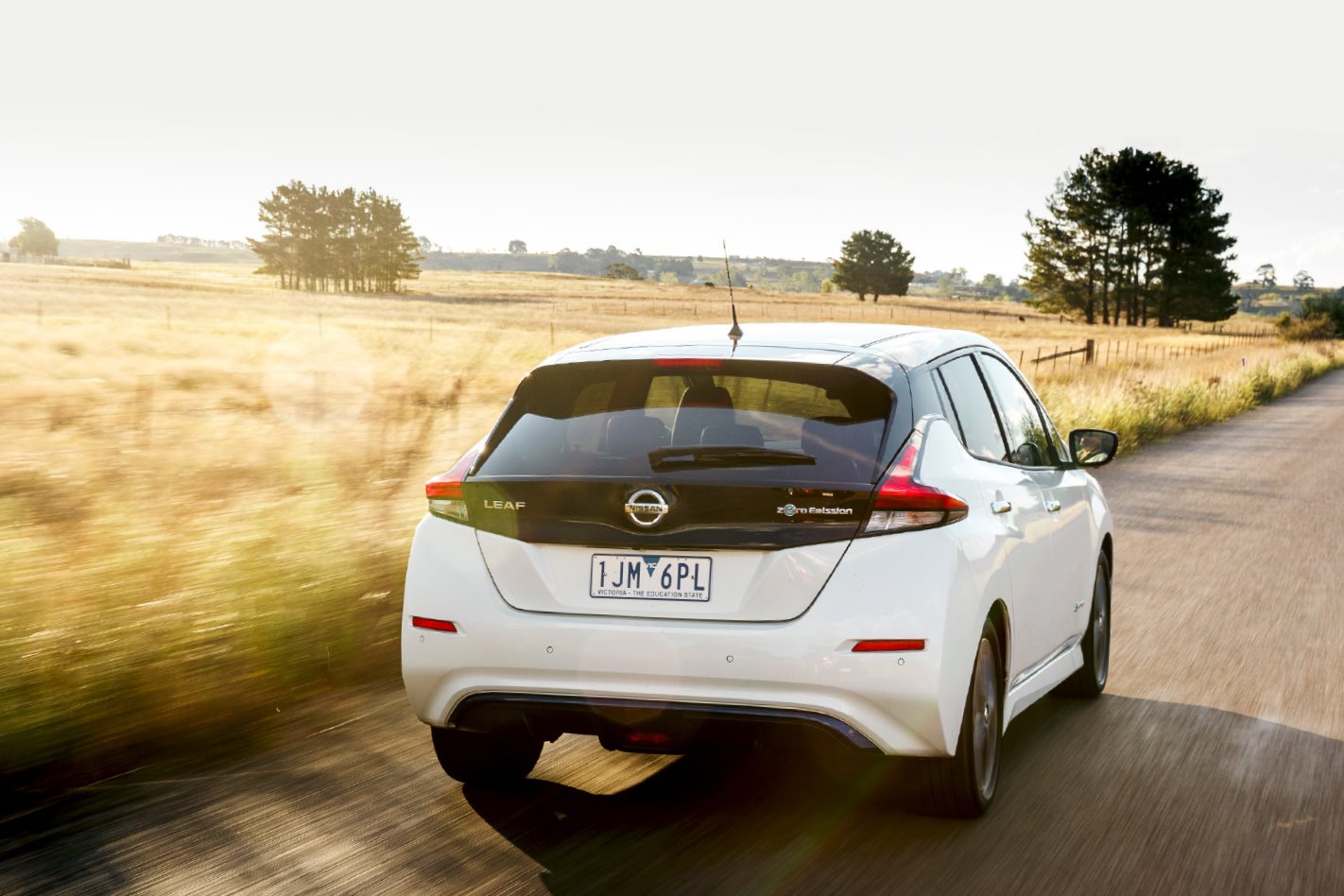 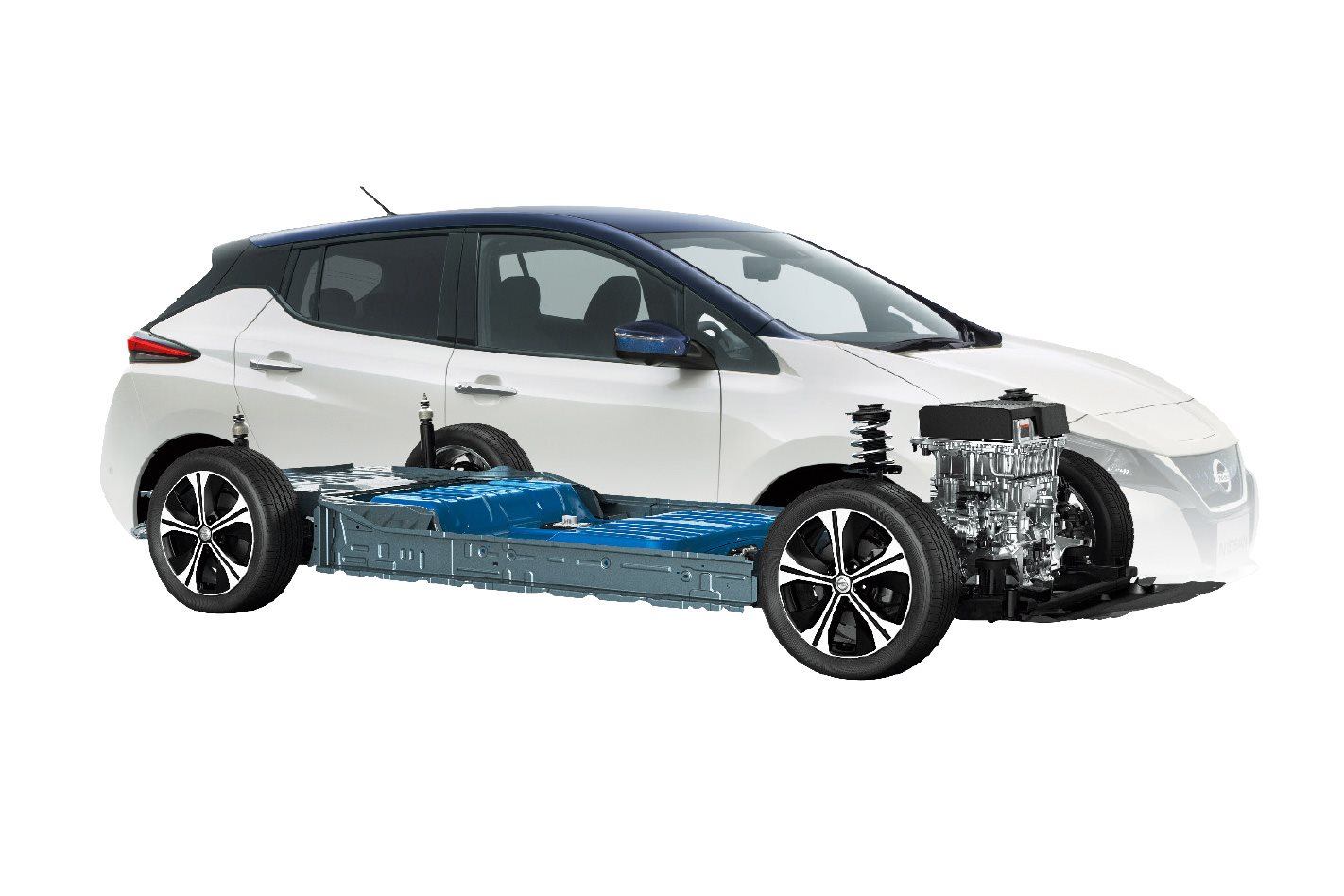 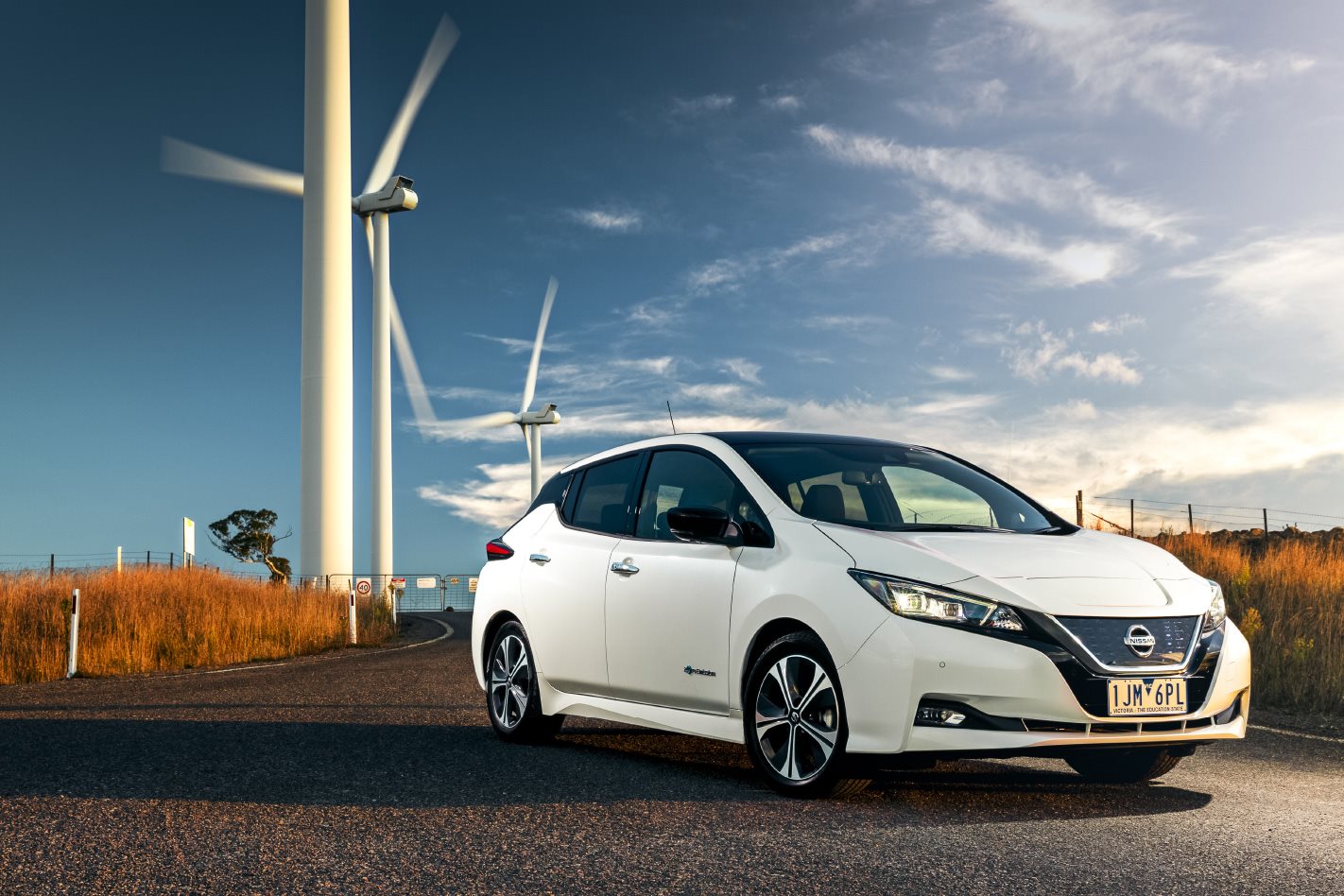