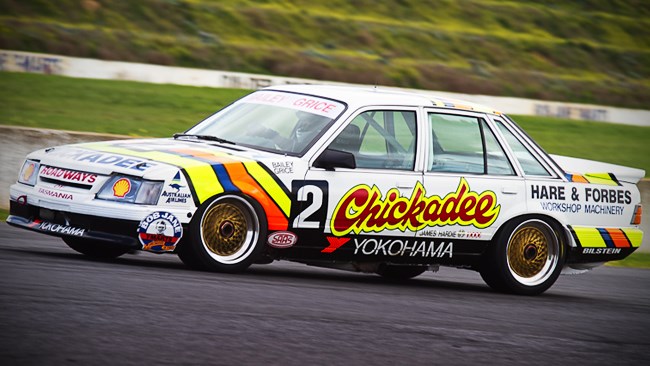 If a racing car sponsored by an automotive brand is logical, then these days food and drink brand sponsors aren’t unusual

I’m a sucker for a random racecar sponsor.

If a racing car sponsored by an automotive brand is logical, then these days food and drink brand sponsors aren’t unusual. In fact, in elite European motorsport, beverages are big – alcoholic, energy, even water and juice.

But to me it’s far more interesting if the sponsor is a bit left-field. In the case of foodstuffs, I’m thinking of the 1986 Bathurst-winning Grice/Bailey Chickadee VK Group A Commodore and the Peanut Slab and OXO Supercube Group A Sierras of the late ’80s, here.

Moving from the culinary field to the arts and in an Aussie take on the BMW art car, we saw the Pro Hart VK Group A Commodore at Bathurst in 1985.

And from arts to … domestic cleaning products, we witnessed the Mistic Mould Destroyer VL SS Group A SV a few years later.

From there to, ahem … services, like those spruiked by the Daily Planet Commodores of the same era.

The Bernie Stack-driven and Everlast-sponsored Commodores are favourites not for outright randomness, but because the former did what it said on the tin and the latter didn’t, lending themselves to commentary gold unmatched until the likes of Neil Crompton and his V8 big, ahh … guns at Bathurst 2008 (Youtube it if you haven’t. And if you have, Youtube it again).

It’s no coincidence that all of my favourites are all from the mid ’80s to mid ’90s. To me, this was a golden era in local tin top racing (and sponsor randomness), when the Australian Touring Car Championship was battled out between multiple brands, engine types and drive configurations. But that’s a subject in itself…

So, what are some of your favourite random-sponsored racecars?