Carroll Shelby enjoyed a 60-year career in the automotive spotlight until his death in 2012, aged 89. Along the way, Shelby was a fresh-faced Texan sports car racer, Le Mans-winning driver and team owner, father of the AC Cobra, production-car modifier, chilli-powder chef and louder-than-life character who might put his name to anything, for a fee.

The AC Cobra – a hybrid of British sports car and Detroit V8 – put Carroll Shelby on the map as a production-car creator and developer. But things took a significant step forward when, in August 1964, Ford approached him to bolster its new Mustang’s image with some true performance cred. 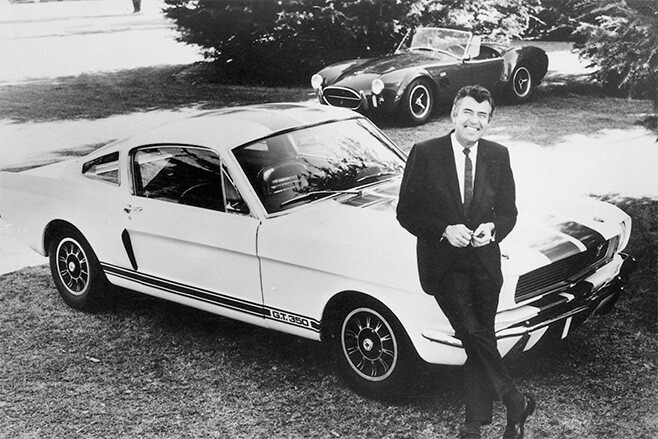 Shelby worked his magic on the fastback, unveiling the GT350 in January 1965. A homologation ‘R’ version had already been submitted for racing, where it would line up as a production two-seater against Corvettes and Jaguar E-Types. Only 36 ‘R’ cars were built, their modifications focused mainly on the engine.

Road-going GT350s were already significantly tweaked. The 4.7-litre (289ci) V8 copped better breathing and side-exit exhausts, all helping to raise power from 202kW to a claimed 228kW. A fibreglass bonnet was held down by racer-style pins.

Underneath, Shelby initiated a bunch of race-based suspension mods, including front- and rear-end geometry changes and stiffer suspension components, pretty much straight off the homologation racer. Contemporary magazine tests had it that the $US4500 GT350 was unrelentingly hard and noisy for road use. Its aspirations were apparent in an options list (available separately, or as a $1500 pack) that included a blueprinted engine, straight-through exhausts, plastic windows, racing gauges, roll cage and alloy wheels. The dual blue ‘Le Mans’ stripes were a dealer-fit option.

The 1966 model GT350 gained some concessions to everyday use, adding rear seats and an optional automatic transmission. 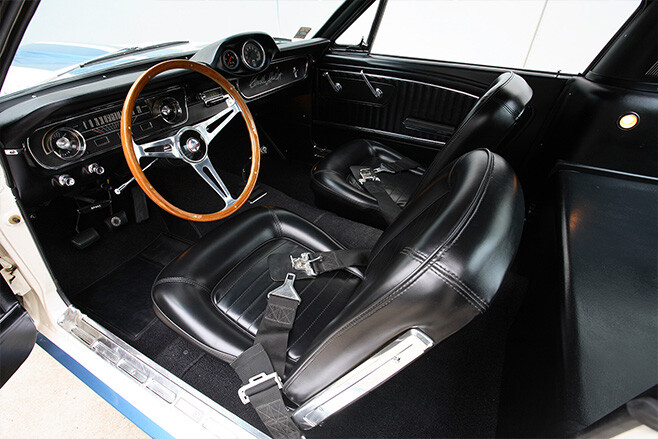 THE GT350’s interior was mainly Mustang, with racy additions of a shallow-dished, wood-rimmed and Cobra-badged steering wheel, dash piggy-back tacho and oil gauge, bucket seats with broader lap belts and aviation-type buckles, and the four-speed floor shifter. Most notable thing inside is the absence of a rear seat, replaced with a fibreglass parcel shelf that accommodates the spare wheel. 1. Hertz so good
GT350 H was a legendary bad decision by Hertz; plenty were raced, thrashed and crashed – for 17 bucks a day.

3. Block party
The GT350 was in good company at its January ’65 launch at Riverside Raceway: Shelby’s big-block Cobra 427 was unveiled the same day.

4. Donor parts
Carroll Shelby was one of the US’s longest-living heart transplant recipients (22 years). He also had a kidney transplant in 1996.