In 2013, Wheels interviewed Ford Australia president Bob Graziano in the wake of the decision to pull out of Australian manufacturing in late 2016

WATCHING him on television, putting the final bullet into Falcon, closing two factories and announcing the sacking of 1200 workers, Bob Graziano seems po-faced, emotionless, remote. He seems like an easy man to dislike; a Blue Oval hitman in a blue suit sent to Australia to kill off 90 years of history and the world’s third oldest nameplate, regurgitating the official spin despite the 7.30 Report’s Leigh Sales’ attempts to provoke and pillory him.

He looks and sounds like an accountant, emoting unconvincingly about how much Ford values ‘Aurrstrayaa’ and how exciting the future for Ford will be.

And yet, inevitably, that two-dimensional image is misleading. Graziano might bleed Ford blue, but he still bleeds. “It was obviously a very difficult decision to take,” he says of the closures. “But the data was compelling, so it was ultimately the right decision, regardless of how painful it is.

“There are individuals out there who don’t like our decision and won’t consider the brand. And I get that. What we need to continue to do is communicate what we are going to do in Australia ... But it would be naive of us to assume that we made the announcement and everything just returned to the way it was before.”

The paradox in all this is that, having recommended the hard decision to fundamentally restructure Ford’s Australian operation, Graziano is now trying to make the transition as fair, and painless as such an unfair, painful exercise can be. It’s a desire that marries with his complex combination of characteristics.

“You could not wish for a better guy to handle this process fairly and sensitively than Bob Graziano,” was how one person intimately familiar with Ford Australia and its steady decline put it. “He has a social conscience, and not everyone does.” 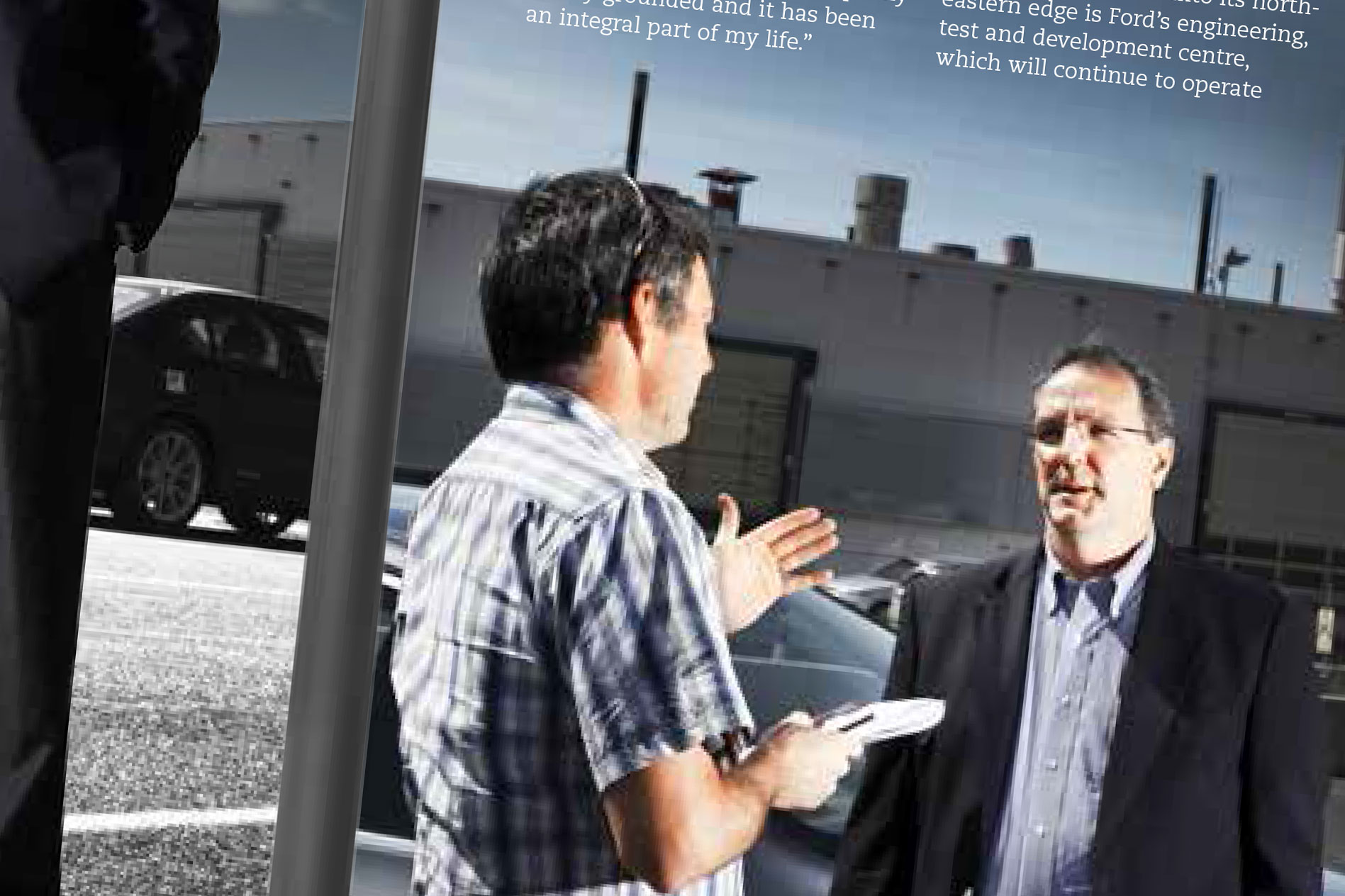 That’s one reason why he gave more than three years notice of the intended closure date – although he concedes that “unforeseen circumstances” might see the plants shut sooner. And also why he doubled his tenure as president from three to six years to navigate Ford Australia safely through this “transition”.

“I’d like to think a lot of the heavy lifting will be done,” says Graziano of the next three years. “But it will always be a work in progress because the consumer will demand that things continue to evolve, they have for the last 100 years and they will for the next 100. We have to change with that.”

Graziano is a strident warrior for Ford and more quietly for God. Being a senior executive in one of the globe’s most cut-throat industries can’t always be easy when combined with sincere Christian values. But Graziano tries, grinding out 16-hour work days and then, along with wife Ginny, donating significant amounts of time to charitable work and counselling.

It is something they have quietly done for years and will take on full-time when he retires from Ford, most likely after his six-year stint in Australia is over at the start of 2017.

“I often talk about my four Fs in life and that’s my faith, my family, my friends and Ford. In that order,” he says. “It’s what helps keep me grounded, it’s what helps keeps my family grounded and it has been an integral part of my life.”

The president and CEO of Ford Australia is at the wheel of his current company car, a Ford Falcon G6E Ecoboost, as he speaks of his philosophical underpinnings. 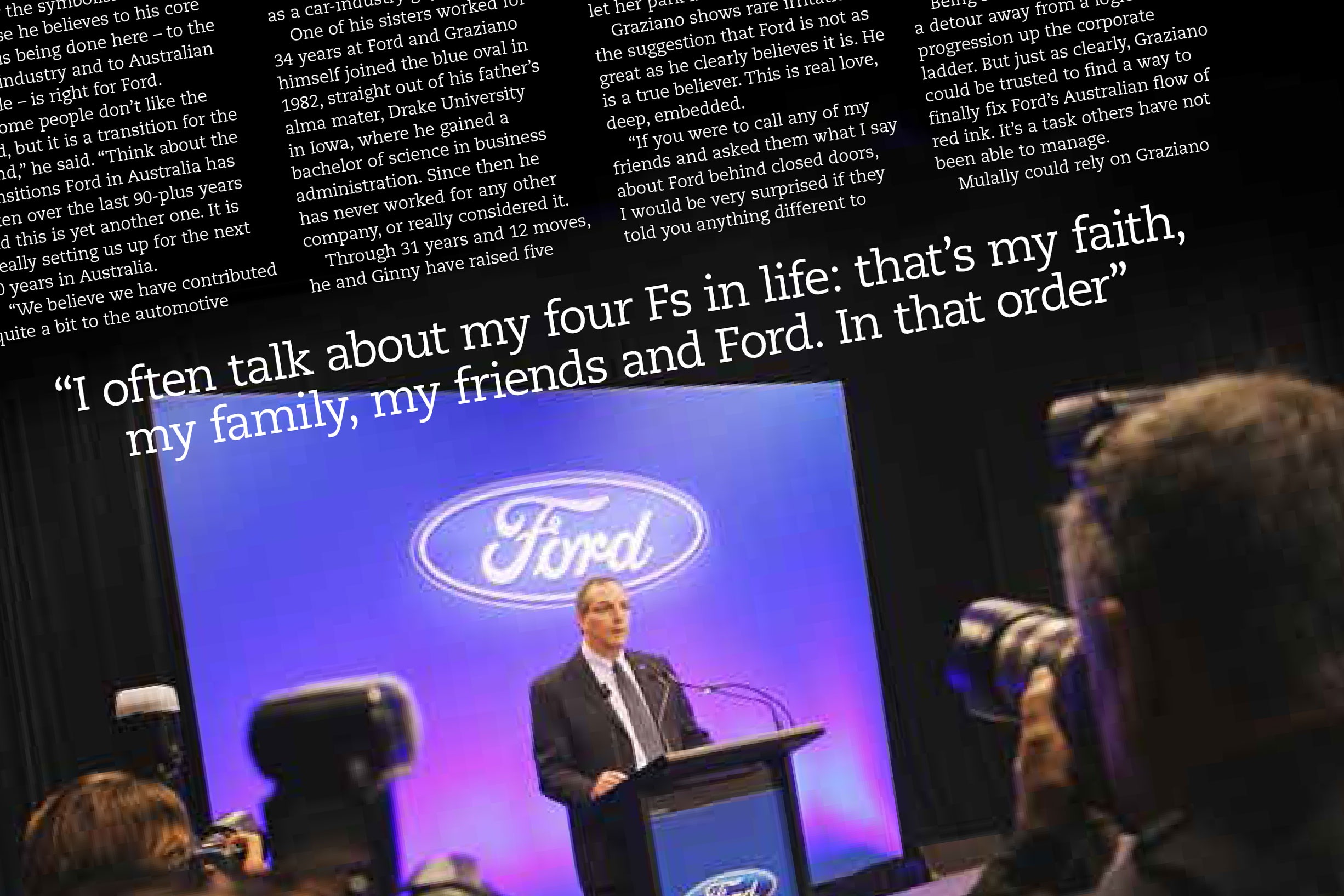 From FoMoCo’s Aussie headquarters in Campbellfield on Melbourne’s northern outskirts, we have driven past the assembly plant, which closes no later than October 2016, then down the freeway toward Geelong, home of the Ford engine plant, which will also be shuttered by that date.

On the way we see the small You Yangs mountain range jutting out of the plains. Tucked into its north-eastern edge is Ford’s engineering, test and development centre, which will continue to operate after the plants are quietened.

In a couple of hours with Graziano acting as chauffeur, we have touched on the various arms of what constitutes Ford in Australia; past, present and future.

If he was at all self conscious about the tour we were taking, Graziano never showed it. Not because he wasn’t conscious of what we were asking him to do, nor the symbolism of it, but because he believes to his core what is being done here – to the local industry and to Australian people – is right for Ford.

“Some people don’t like the word, but it is a transition for the brand,” he said. “Think about the transitions Ford in Australia has taken over the last 90-plus years and this is yet another one. It is ideally setting us up for the next 90 years in Australia.

“We believe we have contributed quite a bit to the automotive landscape in Australia, and we want to continue to contribute. Just in another way.”

Graziano, 54, is steeped in Ford and the automotive industry. His father, Lou, worked for Ford in senior roles for 34 years and Bob was raised – along with six siblings – in Bloomfield Hills, the affluent suburb of Detroit that is home to many car company execs, and the global HQ of Chrysler. Graziano didn’t grow up so much a car guy as a car-industry guy. 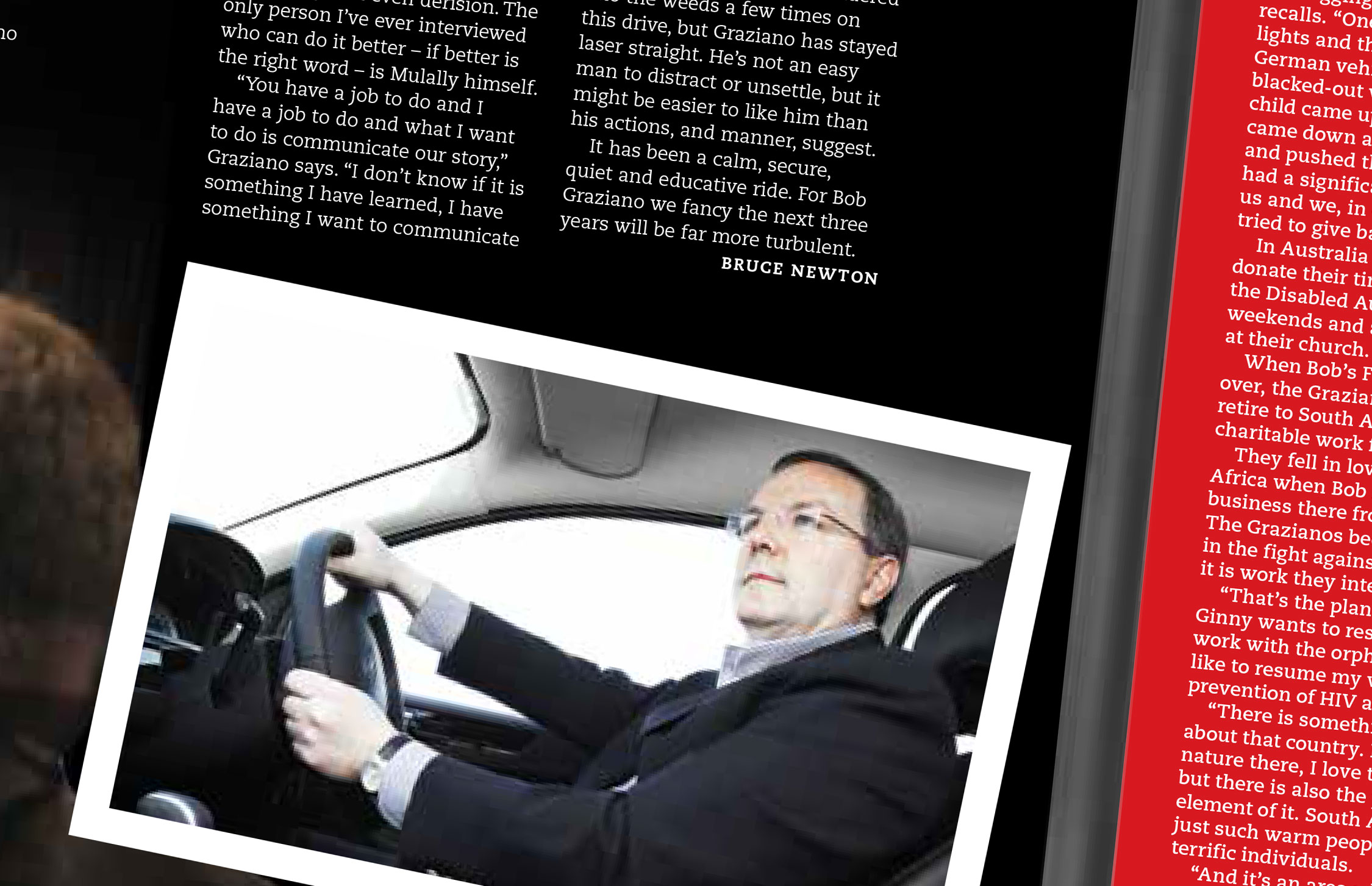 One of his sisters worked for 34 years at Ford and Graziano himself joined the blue oval in 1982, straight out of his father’s alma mater, Drake University in Iowa, where he gained a bachelor of science in business administration. Since then he has never worked for any other company, or really considered it.

Through 31 years and 12 moves, he and Ginny have raised five children and lived in places as diverse as Brazil, South Africa, Japan, China and now Australia.

The day of this interview in early October, Graziano was celebrating the birth of his first grandchild back in the USA.

“I was born in a family that was a Ford family and grew up with it. Everything we have is because of the Ford Motor Company,” he says. “There were always Fords in the driveway. When I first met my wife she drove a Honda and when she came up to visit, my Dad wouldn’t let her park in the driveway.”

Graziano shows rare irritation at the suggestion that Ford is not as great as he clearly believes it is. He is a true believer. This is real love, deep, embedded.

“If you were to call any of my friends and asked them what I say about Ford behind closed doors, I would be very surprised if they told you anything different to what I say to you,” he asserts.

Track back through Graziano’s postings and it becomes very clear he is a ‘go-to guy’ for Ford, be it boosting the company’s presence in South America, managing the relationship with Mazda or steering the Ford alliance in the exploding Chinese market.

It is significant that his career path followed the same course as two of the most senior modern Ford bosses, now retired CFO Lewis Booth and boss of the Americas Mark Fields, who is widely touted to be Alan Mulally’s successor at the very peak of the company.

Being sent to Australia is a detour away from a logical progression up the corporate ladder. But just as clearly, Graziano could be trusted to find a way to finally fix Ford’s Australian flow of red ink. It’s a task others have not been able to manage.

Mulally could rely on Graziano to do the right thing by the ‘One Ford’ plan. Not to be seduced by the romanticism of building cars here, nor be put off the hard decisions because his ego was too big to cope. And not be too scared to be branded the villain in the ‘Death of Falcon’ passion play.

“There aren’t too many jobs in the company that allow you to sit back and coast,” Graziano counters, resisting the description of hard-man. “They all provide you with the opportunity to make a difference, and some provide bigger opportunities than others.”

Clearly so. It is because he believes what he is doing for Ford that he can stick so doggedly and calmly to the corporate-speak message he wants to convey, sometimes in the face of incredulity and even derision. The only person I’ve ever interviewed who can do it better – if better is the right word – is Mulally himself.

“It’s the other side of the same coin that you have. You are always on message as well, there is always something you want to get out of your stories. We can go off into the weeds for a while but you will come back to your main story sooner or later. I am no different.”

Metaphorically we’ve wandered into the weeds a few times on this drive, but Graziano has stayed  laser straight. He’s not an easy man to distract or unsettle, but it might be easier to like him than his actions, and manner, suggest.

It has been a calm, secure, quiet and educative ride. For Bob Graziano we fancy the next three years will be far more turbulent.