It’s Evo vs STI in one final stoush, but can either compete with the new-age hot hatches from Europe?

Aussies are well familiar with the concept having to choose between red and blue.

Whether it’s cars (Ford vs Holden), football (Queensland vs NSW), beer (Tooheys/Cascade) or, back in the day, smokes (Winfields), most folks tend to naturally form a preference for one side or the other.

But Australia doesn’t have a monopoly on this match-up. The fight between Subaru’s WRX STI and Mitsubishi’s Lancer Evolution might not have the history of our local dust-ups, but the battle lines are equally clear: fast Lancer fans aren’t likely to join the boxer brigade, and vice versa.

With the arrival of the Lancer Evolution Final Edition, however, the contest is nearly at an end. Given that makes the WRX STI the last man standing, you could argue the Subaru is the winner by default, but is the Mitsubishi able to land one last knockout punch, in the manner of Mickey Rourke in The Wrestler? 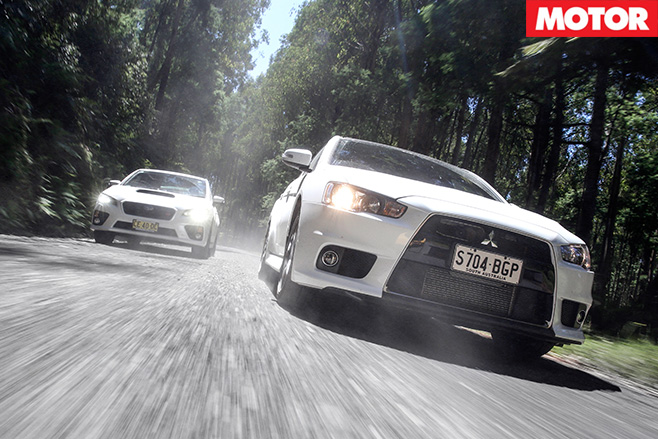 Does it matter? For the past 25 years, low-volume Lancia Integrale aside, turbo all-wheel-drive road rockets have predominantly been the domain of the Japanese. In recent times, however, Europe has taken to the concept like a fish to water, with first Audi (S3/RS3) then Volkswagen (R32/Golf R) and Mercedes-AMG (A45) all releasing their own takes on the theme.

The latter is here as a representative rather than a competitor, to test, do our Oriental protagonists still bring anything to the table in the wake of this Euro onslaught? Or have they been overwhelmed by the technological superiority of the Germans?

After 24 years and 10 generations, the Final Edition is the swansong for the Lancer Evolution. Sadly, the mouth-watering 353kW Final Concept has been significantly watered down for production, however this is not just a badge-and-stickers job either. ECU fiddles and sodium-filled valves for improved cooling liberate an extra nine kilowatts at the top end and add 48Nm of mid-range punch, bringing totals from the 2.0-litre turbo four to 226kW/414Nm. 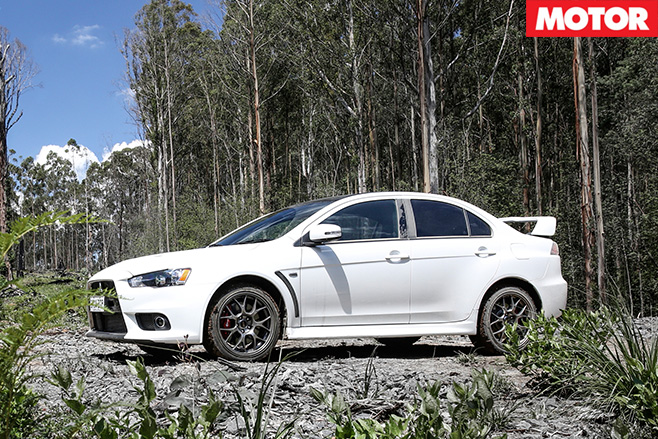 But aside the from the engine changes, the Final Edition’s greatest strength is its value proposition. At $53,700, it’s $5790 cheaper than the Evo X’s 2008 launch price and includes as standard the Performance Pack that once added $5500 and features two-piece Brembo rotors, Bilstein dampers with Eibach springs and forged BBS rims. Just 1000 Final Editions will be built, with 150 coming to Australia, each individually numbered.

Subaru also recently updated the WRX STI for MY16, however the changes are limited to increased safety and convenience features on Premium models. The venerable EJ25 2.5-litre turbo flat-four continues with 221kW/407Nm, sent through a six-speed manual gearbox. Subaru claims an impressive 4.9sec for the 0-100km/h sprint, however extracting numbers continues to be as cruel and brutal as the opening scenes of Saving Private Ryan.

The only way to get the STI off the line is to use as many revs as possible, dump the clutch and hope the drivetrain doesn’t blow itself to smithereens. Wetting the tyres helps slightly, reducing the shock load and allowing a little wheelspin to keep the car on boost. It jumps off the line like it’s been stabbed and then it’s a matter of changing gears as quickly as possible, something the synchros aren’t too fond of. Crunch. 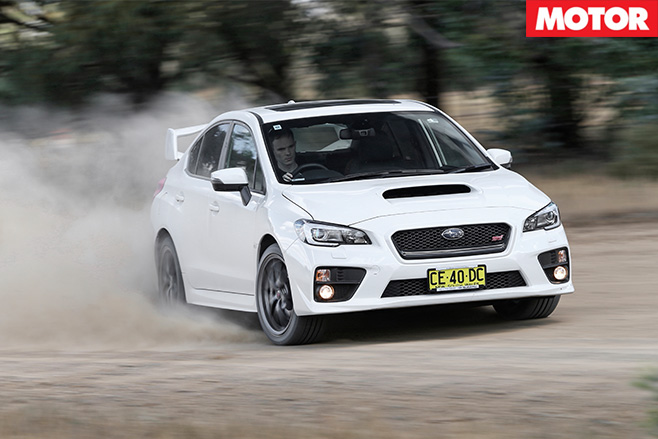 Nought to 100km/h takes 5.49sec, a disappointing six-tenths slower than Subaru’s claim but roughly in line with what we’ve managed previously. The STI’s benchmark time was set in mid-winter with rally ace Cody Crocker at the wheel, however it’s difficult to see where the time difference is, especially given the STI’s ultra-short gearing requires a time-sapping shift to third at 95km/h.

Anyhow, the Evo requires a similar technique, but an artificial 5500rpm rev limiter when stationary limits the violence with which it can launch. That’s not enough, and the Mitsubishi bogs down slightly, losing three-tenths to the Subaru by the time the pair hit 40km/h. Interestingly, trying the same wet-tyre trick as the STI sends the Evo’s active all-wheel drive system into conniptions, spinning either the front or rear wheels like mad and crabbing down the strip like a wonky dog.

It still trails slightly at 100km/h (5.61sec) but from there the two are virtually neck and neck, the Lancer crossing the 400m mark in 13.67sec at 164.78km/h, a mere 0.05sec and 0.20km/h behind the STI. Of course, the best European hot hatches are more than a second up the road these days, and even price rivals like the VW Golf R are at least half-a-second clear, but we’ll continue. 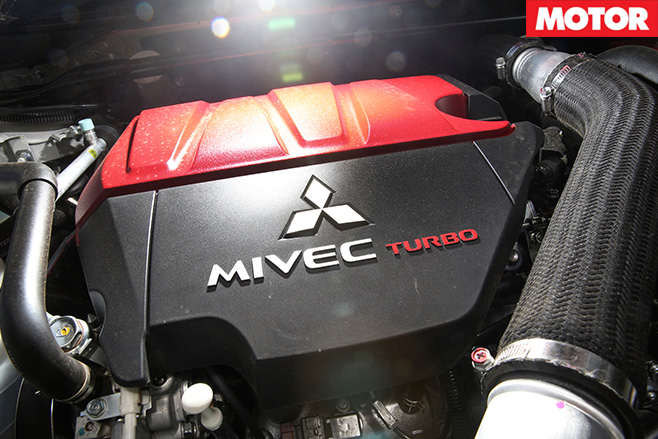 The Lancer’s 4B11 engine is rather remarkable. A replacement for the venerable 4G63T, it revs to an impressive 7600rpm (600rpm beyond redline) and is backed, along with the rest of the driveline, by Mitsubishi’s 10-year/160,000km powertrain warranty, so it’s fair to say you’re not likely to wear it out in a hurry. Unfortunately, this on-paper promise doesn’t translate too well in the real world.

While effective, the 4B11 is laggy by today’s standards; we’ve become spoiled by new-gen turbo engines that pull from idle. It also sounds strained at higher rpm – chasing the 7000rpm redline sounds like you’re hurting it – and devours 98RON at a tremendous rate. Combined with a tiny 55-litre fuel tank, the Evo’s thirst results in a pathetic touring range; fill-ups in 350km or less are commonplace.

It’s not helped by ill-conceived gearing. With Mitsubishi’s SST dual-clutch ’box having ended production a while ago, the Final Edition is only offered with a five-speed manual, and in an effort to force buyers into the then-new whizz-bang self-shifter, the manual Evo X was seemingly saddled with whatever cogs were left on the shelf. 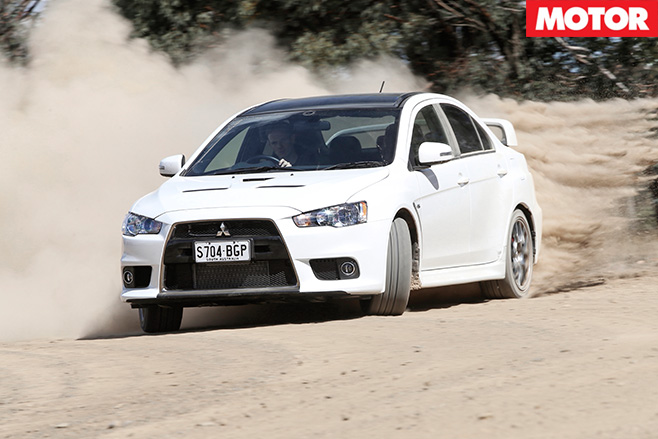 First to fourth are extremely short – no bad thing – while fifth is a big jump without being tall enough to deliver decent cruising economy, the engine buzzing away at 3000rpm at 100km/h. The shift itself isn’t great, either, often baulking between ratios and with a fairly long throw. The STI, meanwhile, is no Porsche Cayman, but the shift is better, which is just as well, as its rally car ratios mean you have to row the ’box like a member of the Oarsome Foursome trying to escape another Goulburn Valley advertisement.

Unfortunately, the Subaru is a very difficult car to drive smoothly; it’s all too easy to get out of ‘sync’ with the car and end up looking like you’re on your third driving lesson. Without fail, everybody who drives it stalls it, too. Thankfully, it’s at its best when you’re driving it like it was designed to be driven. 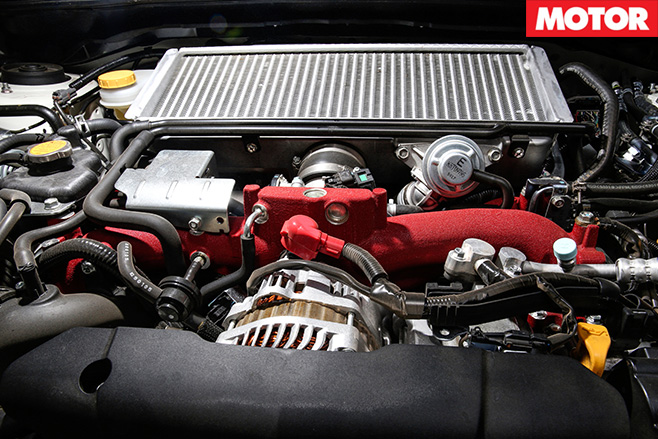 The EJ25 has lost a bit of its boxer character over the years, but keep it singing between 3000-6000rpm and it’ll slingshot you between corners in a rush of turbo boost. At this point you lean on the brakes – strong on road and just about adequate for track use – turn in and feel the car grip, grip and grip some more.

Any under or oversteer at road speeds is usually the result of driver error; the latest STI is massively stiffer both in terms of bodyshell and suspension set-up than its predecessor, and while this does bugger-all for the ride quality, it has made it a much sharper cornering tool.

So far, so good, however the fly in the Subaru’s ointment is its steering. The weighting is about right and there’s enough feedback, but it’s very sharp just off centre and feels strangely ‘springy’ with lock applied. Far worse, though, is its behaviour over mid-corner bumps; the rack rattle sounds like the bolts haven’t been done up properly and the kickback has the wheel bucking and writhing in your hands. It’s a major dynamic flaw and costs the STI dearly on the very roads it should shine brightest. 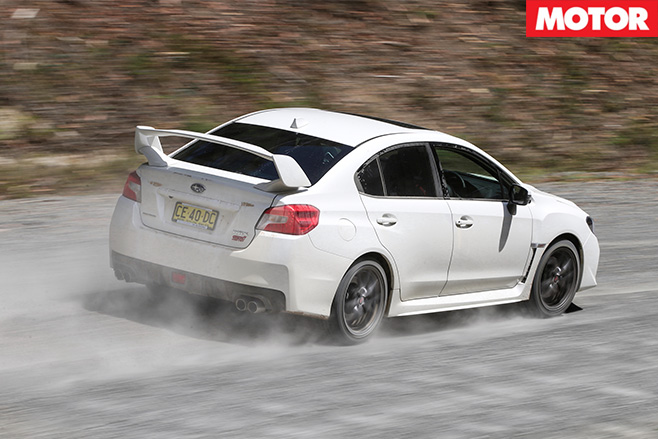 In contrast, there are few cars more at home being driven on their door handles than the Lancer Evolution. The tyres can be screaming in torture and the scenery a blur, yet more often than not the mood behind the wheel is as relaxed as a yoga retreat. This really is such an easy car to drive. Easy, but not unrewarding. The Evo’s trick Super All-Wheel Control all-wheel drive system is constantly shuffling torque around, but at no point does the driving experience feel synthetic or digital.

The steering is quick and accurate and the Mitsubishi peels into turns like a rear-driver; you can also trail the brakes to move the rear slightly but on exit the result is the same – total traction bar a hint of oversteer. Thrown around on the dirt for Brunelli’s camera, the STI is great fun, but feels edgy and unpredictable compared to the smooth fluidity of the Evo. No matter how ambitious the entry or aggressive the oversteer angle, you always feel like the situation can be recovered. 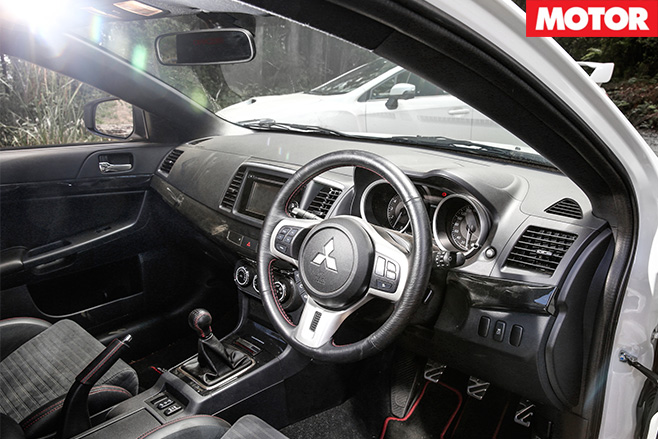 It’s a trick that only the new Focus RS could hope to emulate and a step beyond Haldex-equipped European rivals. Where the Evo is a step below – probably more than one – its Euro competitors is inside. The lack of sat-nav and awkward location of the USB port betray its 2008 vintage, but that doesn’t explain the lack of steering wheel reach adjustment (luckily, the driving position is pretty good) nor the poor quality of the materials used – it’s a stark reminder of how far interiors have come in the past few years.

The Subaru sets no benchmarks, however the MY16 update brings welcome improvements. The new 7.0-inch touchscreen is fast-acting and looks slick, miles better than the clunky old unit shared with myriad Toyotas. 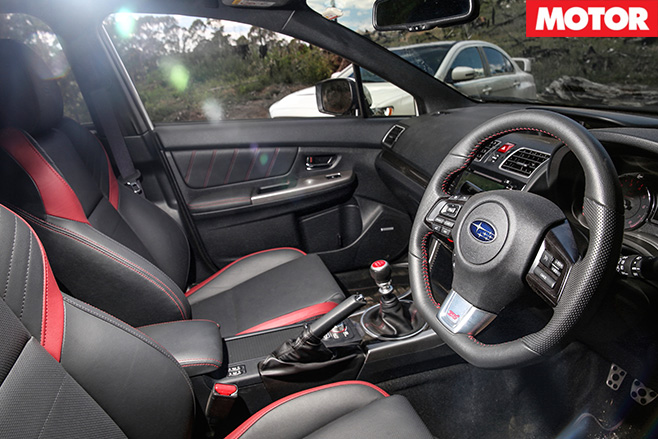 It’s only available on up-spec Premium models ($55,390, or an extra $300 with the rear wing), as is Subaru’s Vision Assist active safety technology which includes blind spot monitoring, lane-change assist and rear cross-traffic alert. Hopefully, MOTOR readers don’t really need such assistance, however the side view monitor, which points a camera at the front wheels, could prove helpful in avoiding scraping kerbs.

Of our two winged warriors, the Mitsubishi is clearly the less competitive 2016 package. Ironically for a model called Evolution, the Mitsubishi has suffered from a lack of investment and would need a serious overhaul of its interior, transmission and engine efficiency to battle today’s best.

Its dynamics are still right up there, and act as a reminder that these cars were once as much designed to fly through the forest as they were to do the weekly shop, which only makes it more upsetting that it will not get that chance. Mitsubishi says the market doesn’t want high-powered all-wheel-drive turbo cars, which must be why Ford just spent a bomb developing the Focus RS and the Mercedes-AMG A45 continues to be a sell-out success. 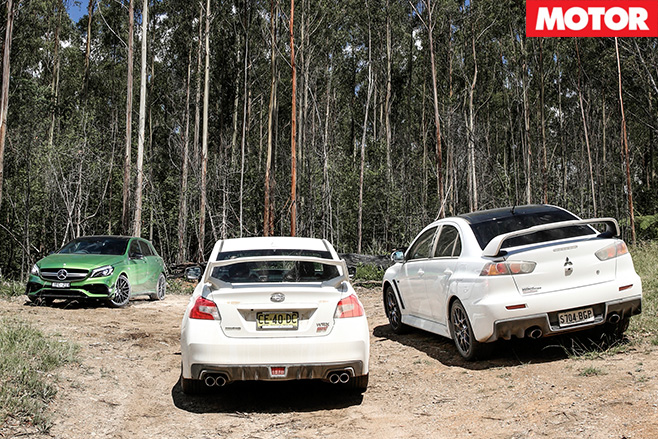 However, while the Subaru is the winner here, it might want to keep the cork in the champagne for the time being. Y’see, when it first popped on to the scene in the late 90s the STI’s trump card was that while it might have been a bit unrefined and basic inside, it was the fastest thing on four wheels, capable of giving anything up to (and occasionally beyond) a Porsche 911 a bloody nose.

Subaru has expended a lot of effort in trying to make the STI more liveable day-to-day and has succeeded to a point, but it’s barely any faster than it was 15 years ago while everything else has made huge strides forward. It retains a pass mark by offering the raw involvement of a Renault Megane RS with the all-weather ability of the VW Golf R, but it could face a tough test with the mid-year arrival of the Ford Focus RS.