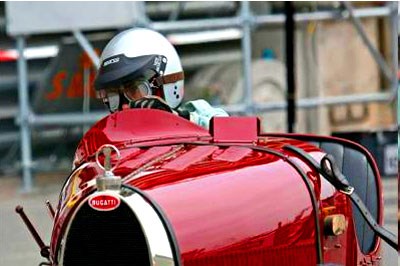 Awesome quality is a claim that's easy to justify.

Bring priceless historic racing cars together with some legendary drivers at the iconic Monaco grand prix venue, shoot everything that moves, lace through some loving words of a true enthusiast, and finally use a stunning production technology to produce a seriously memorable commemorative coffee-table book of the occasion....


This is the précis of Race Face, a magnificent and massive A3-sized superb-quality limited-run album of the 6th Grand Prix Historique at Monaco, the impressive work of Jeremy Braithwaite, an Australian motorsport enthusiast.

The Monaco event covers the pre-war era of Bugatti and Alfa Romeo through to the 3.0-litre cars of 1978 and is unique in that so many of the cars in the field had a Monaco history.

Monaco is of course unique in that almost the whole principality stops for a historic motor race and where the circuit is little changed from before the war.

Braithwaite also observes that Monaco is also uniquely appealing to shooters because photographers can get very close to the cars. It helps too that historic racing cars did not smother the driver in bodywork. He is highly visible.

To quote from the Introduction to the book: "In most motorsport photographs you simply see a picture of a car. Here you see the driver at work, especially in the more open cockpits of early cars, and you can clearly see their eyes. The eyes are very expressive. They give you a real insight into the driver and that special place in their head people go when racing a motorcar." The title of the book is therefore very apt..

The album contains one or more photographs of every car that raced in the event as well as some cars that only practised.

Braithwaite's decision to design the book around the large A3 format (almost as big as a coffee table) and to closely crop many of the shots has provided some marvellous detail. The reader can gaze at each rivet, read the instruments, or compare tyre deformation at the very limit on the exit of Casino Square. The colour photography is brilliant, and the reproduction almost beyond belief.

Race Face is available in two editions. The premium Gold Edition is limited to 350 and is signed and numbered. It is bound in red leather, printed on 250gsm paper and priced at A$495. One copy of the Gold Edition is reserved for each entrant in the event and they will receive their race number. The balance of 133 albums are available for sale.

The Silver Edition is bound in black, printed on 170gsm paper and priced at A$295.

Race Face was digitally printed by award-winning The Digital Centre in Sydney using the latest iGen3 press. The Digital Centre differentiation is based on their Oris colour management system and their staff skills. Digital press technology makes very low volume productions such as Race Face an economic proposition for both publisher and purchaser; in quality terms it is the equal of traditional offset or photography techniques.

Published by J2B Publishing, Race Face is distributed in Australia by Autobookworld and Autopics

The 1st GP Historique was held in 1997, one week before the Formula One grand prix.

There was a three year gap to the next event in 2000, and there has been an event every two years since.

In 2008 for the first time there was a two week gap to the F1 race due to the length of time needed to erect the F1 paddock!

The event started as an interesting prelude to GP week but now stands on its own, with many grandstands looking full.

• Series A for GP cars up to 1947. The first Monaco GP on 14thApril 1929 was won by a Bugatti. There were seven in the 2008 field along with Maserati, Alfa, and a number of Riley's including Raymond May's famous Brooklands White Riley. There were also three ERAs including the car in which Peter Whitehead won the Australian GP at Bathurst in 1938.

• Series B for front-engined GP Cars built before 1961. Highlights were an all Lotus 16 front row, the ex-Phil Hill Ferrari 246 that was the last front-engined car to win a GP in 1960, and everybody's favourite car of the period -the Maserati 250F. The Connaught's looked quite brutish especially when compared to the dainty Gordini and Cooper Bristol.

• Series C for Sports Cars built before 1953. Highlights were the presence of Sir Stirling Moss in the field at nearly 80 years of age, and still wearing his old helmet, and the battle between the C Type Jaguars of David Wenman and Nigel Webb. The Ferrari 225S of Jose Fernandez won the only Monaco GP for sports cars in 1952; it finished 7thin 2008.

• Series D for Formula Junior. It was the category's Golden Anniversary and the Monaco race brought together many of the very early cars with long stroke motors. Simone Stanguellini drove a car built by his grandfather and finished on the podium. This category has provided very close racing over the years as the traditional 'crowd warmer' for the GP.

• Series E for rear-engined GP cars built before 1966. This was the end of the golden era of motor racing before wings and slicks. Simon Hadfield, in his Lotus 21, won the race against much later machinery. John Elliott ran his distinctive Lotus 18 at the Eastern Creek Tasman Revival meeting; a late afternoon shaft of light illuminates his car at Ste Devote.

• Series F for 3.0 litre F1 cars built before 1975. The two McLarens that James Hunt used to win the World Championship in 1976 were both in the field, #3 and #6. Jean-Louis Duret had a big oversteer slide in his Lotus at Ste Devote and clouted the Armco inches away; the four photo sequence in the book.

• Series G for 3.0 litre F1 cars built between 1975 and 1978. Highlights were the two Tyrrell six-wheelers. Mauro Pane crashed into the Armco beside the author at the exit from Tabac. It looked and sounded like a hard hit, but astonishingly he carried on to finish second.

No mistake, for anyone interested in grand old historic racing cars, Race Face is THE ultimate coffee-table book. 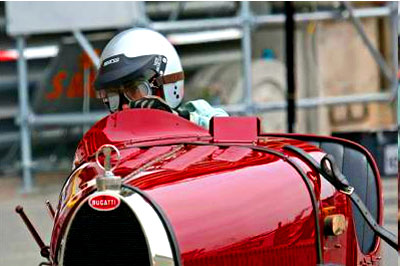 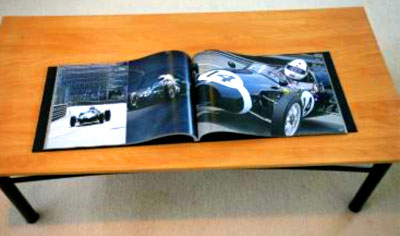