‘Electrification’ covers everything from the mildest hybrid to the wildest EV. It’s an imprecise catch-all term, But there are ways to measure the steps from zero to 100 percent electrification. Just count the volts, kWh and kW...

WHILE its engine is downsized to just 1.5 litres, the all-new petrol-burning turbo four of the Mercedes-Benz C200 is augmented by a 48-volt motor-generator. Benz markets the technology as EQ Boost, referencing the coming-soon pure electric EQ sub-brand and its wide-ranging electrification strategy.

In the C-Class, EQ Boost adds up to 10kW and 160Nm directly to the engine’s crankshaft, via a wide and grippy serpentine belt. The new C200’s maximum power remains unchanged compared to the previous version with a turbo 2.0-litre engine, while fuel consumption and CO2 emissions are reduced.

The motor-generator doing the work occupies the same space and place as any ordinary alternator. But the 48-volt machine can do so much more...

It provides big-time torque low in the rev range, covering the downsized engine’s lack of it and improving throttle response. Its ample power makes it a very strong starter motor, too, so the fuel-saving auto stop and start system works seamlessly. When operating in generator mode, it’s smart enough to charge the battery mostly when the car is coasting or braking. So instead of burning fuel to turn the engine crankshaft to spin the alternator to recharge the battery, kinetic energy does most of the work.

Charge is stored in a 48-volt battery roughly the size of a small briefcase. Operating via a DC-DC converter, the 48-volt battery supplies a compact 12-volt battery that powers everything from the wipers to the infotainment system.

However, being permanently connected to the engine crank by a belt and with cramped space to increase in size and therefore power, the potential of this simplest kind of low-voltage hybrid is limited. Pure electric propulsion is out of the question.

Engineering a more electric and therefore more fuel-efficient hybrid means giving the motor-generator room to grow in size and power. And this means a move to the next level...

The 48-volt motor-generator of the Mercedes-AMG CLS53 isn’t strapped to the front of its all-new turbocharged 3.0-litre in-line six. Instead it’s sandwiched between the car’s engine and its nine-speed automatic transmission.

The output of an electric motor is directly proportional to the size of its rotor. Installing the 48-volt machine adjacent to the engine’s flywheel enables a big increase in rotor diameter, from saucer-size to pizza tray.

Installing an electric motor here, even a slim one, increases the length of the engine and transmission assembly. But the move means the familiar engine drive belt attached to the other end of the crankshaft can be deleted. This, in turn, requires switching traditionally belt-driven power consumers like air-con compressors and coolant pumps to electric drive.

The CLS53’s enlarged motor-generator adds a 15kW and 250Nm kick to the big four-door coupe’s outputs, a much bigger boost than C200’s belt-drive 48-volt unit can deliver.

The increased generation ability of the CLS53’s 48-volt system also enables the addition of power-hungry technologies like the electric compressor that forces extra air into the engine at low revs. In fact, some manufacturers choose to go to 48 volts only for this reason. Audi’s non-hybrid SQ7, for example, has a 48-volt system to power the electric compressor that adds bottom-end boost to its turbo 4.0-litre V8 diesel, as well as the vehicle’s active anti-roll system.

Despite the higher power of the CLS53’s 48-volt motor-generator, it doesn’t produce enough to make the Mercedes-AMG a part-time pure electric vehicle.

This next step requires yet more voltage. And a clutch...

Say ‘Hi!’ to high voltage. Hyundai’s Ioniq Hybrid packs a 260-volt battery under its rear seat, connected via the orange-sheathed wiring that’s mandatory beyond the 60-volt threshold to a 32kW and 170Nm motor-generator.

As in the CLS53, the Ioniq Hybrid’s electric machine is a disc sandwiched between engine and transmission, in this case a non-turbo 1.6-litre four and a six-speed double-clutch auto.

What makes the Hyundai different from the Mercedes-AMG is an additional clutch between engine flywheel and electric motor. This clutch can unhitch the electric motor from the petrol motor, thus enabling electric-only driving.

This is a simpler system than the well-known Hybrid Synergy Drive introduced to the world in the first Prius back in 1997, and used by Toyota and Lexus in various models ever since. Toyota’s tech requires two motor-generators, not one, and has a unique transmission that defies easy explanation.

With the Ioniq, Hyundai is following in the footsteps of that other Japanese hybrid pioneer, Honda. The first Insight, launched in Japan in 1999, featured what the company branded IMA (for Integrated Motor Assist). Its single motor-generator design has been used by Honda ever since, in models like the Civic... and imitated by many other car makers wanting to join the hybrid highway.

The Hyundai’s motor-generator is strong enough to propel the Ioniq alone, but only briefly. Its lithium-ion polymer battery holds less than 2kWh, enough to store the bursts of electricity delivered by regenerative braking for later use, but not enough to actually drive very far.

Storing enough energy for sustained electric driving means another jump in battery voltage, capacity and size, plus the addition of charging hardware so the car can suck energy from the electricity grid. 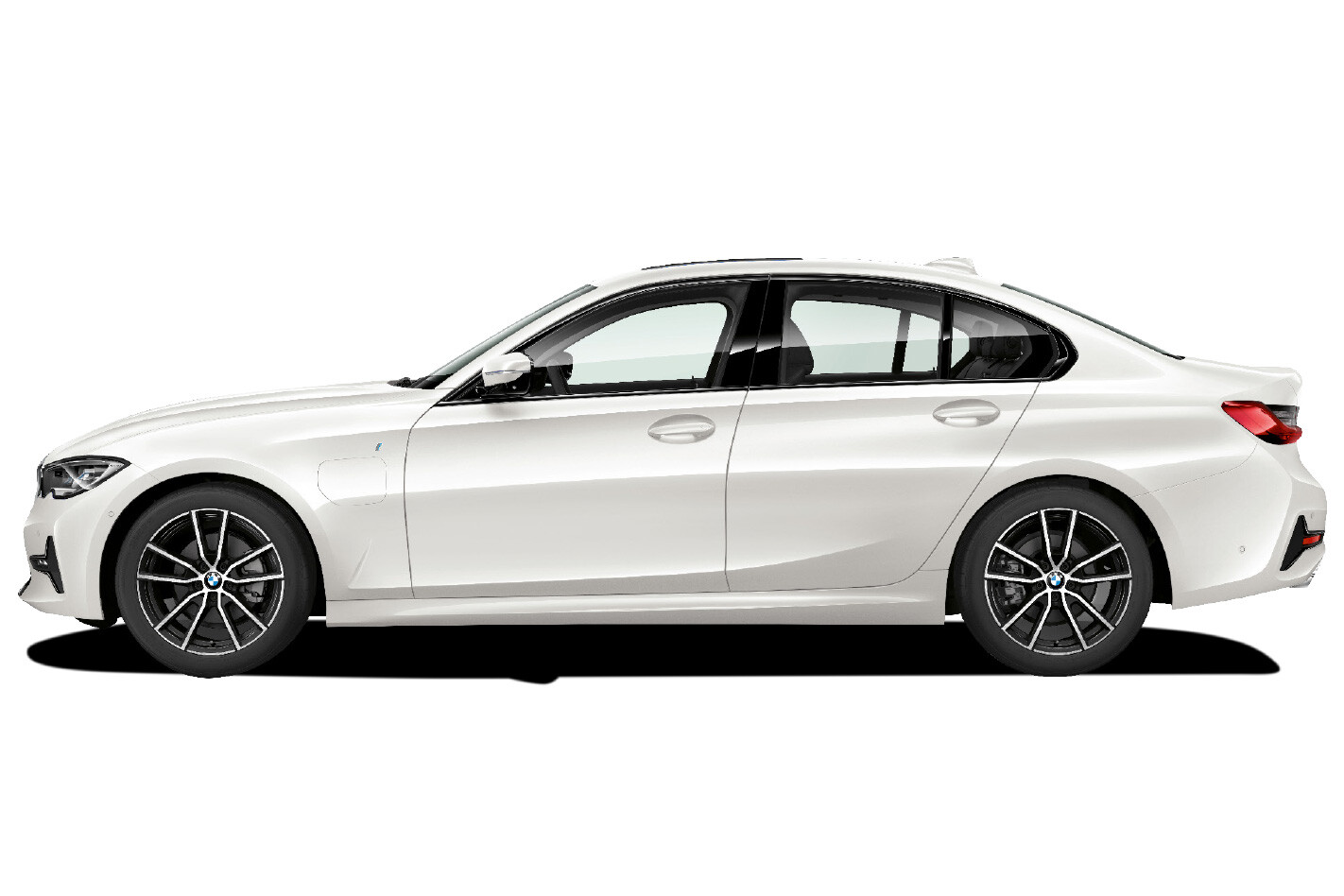 One of Europe’s most committed, and successful, auto-electrifiers is BMW. The Bavarian brand is a master of plug-in hybrid tech in mainstream models. There’s a new-generation 330e iPerformance plug-in hybrid in the pipeline, but the new electrified 3 Series will use an improved version of the previous model’s drivetrain.

BMW’s favoured drivetrain layout is broadly similar to the Hyundai Ioniq Hybrid and the Mercedes-AMG CLS53, with an electric motor-generator sandwiched between engine and eight-speed automatic transmission.

In this case, the electric machine adds 65kW and 250Nm to the output of the 330e’s turbo 2.0-litre petrol-burning four.

What makes the outgoing 330e iPerformance the kind of hybrid that needs a plug is its bigger battery. The high-voltage 293-volt lithium-ion pack stores almost 6kWh. Hidden beneath the boot floor, it’s capable of propelling the car for around 40km. BMW promises the new 330e will have an even longer electric-only range, which points to a battery with even higher voltage and more kWh.

In its electric i3, BMW has doubled the vehicle’s battery capacity since production began in 2013. Similar progress is being made with plug-in hybrid batteries.

Here’s the point where internal-combustion engine and electric motor stop holding hands. In other hybrid types, engine and motor share the same power-delivery route. But in the case of an axle-split plug-in hybrid like the Mini, they go their separate ways....

This first-ever plug-in vehicle from the BMW-owned Brit brand has a turbo 1.5-litre triple driving its front wheels via a six-speed automatic, and an electric motor-generator driving its rear wheels via a fixed, single-ratio gear.

For both motor-generator power and battery-pack capacity – 65kW and around 6kWh – the Mini mimics the 330e, ensuring that its electric-only driving range is in the same 40km ballpark.

There are advantages to doing it this way. Disconnecting the engine and motor provides more drivetrain-packaging flexibility, at the same time adding all-wheel drive.

It’s only one more small step from here to the pure electric vehicle. Delete the internal-combustion engine, then install the biggest, highest-voltage battery that people are prepared to pay for...

Compared to any kind of hybrid, a pure EV is technically simple. The new Leaf has a 350-volt 40kWh lithium-ion battery pack connected to a 110kW electric motor driving the front wheels via a fixed-ratio reduction gear.

Because the motor produces its 320Nm torque maximum at zero rpm, and spins to close to 10,000rpm, it simply doesn’t require a transmission with multiple ratios. As in hybrids, the electric machine also functions as a generator while coasting or braking, improving efficiency and therefore driving range.