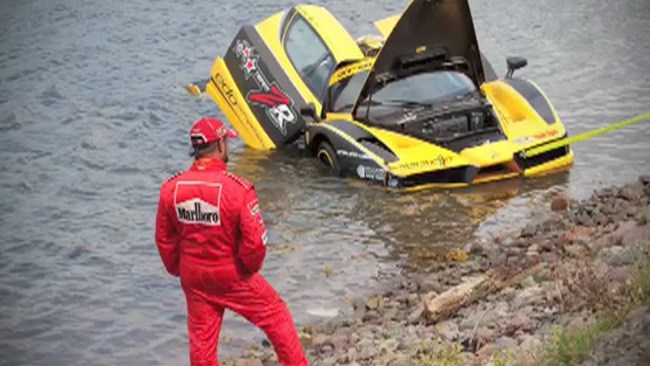 This video captures the moment the world's fastest Ferrari span out of control - and ended careering into a saltwater lake.

This video captures the moment the world's fastest Ferrari span out of control - and ended careering into a saltwater lake.

Owner Zahir Rana was driving the modified Ferrari Enzo in the Newfoundland Targa road race in Canada last week when he lost control of the $1.5million supercar. It spun 180 degrees before swerving off the road and into the water.

Zahir and his co-driver Roland Linder escaped from the submerged supercar without injury and the Ferrari drifted back to shore before being lifted onto the back of a recovery vehicle.

Zahir, a supercar dealer from Calgary, Canada, says the exclusive Enzo only suffered “slight damage” to the front bumper and wing and will be repairable. He said: “My first thoughts were, ‘Oh my God’. I love my Enzo and to me it's the best thing ever, but I suppose it's just a car. It’s no big deal.”

There speaks a man with some serious cash.

The Enzo is the most extreme legal car to ever come out of Ferrari’s factory in Maranello, Italy, with just 400 rolling off the production line.

Owners include Eric Clapton and Ralph Lauren, but Zahir's model has been modified by German tuning house Edo Competition. That means the power from the 6.3-litre V12 engine has been boosted from 486kW to 626kW with the weight of the car reduced by 100kg. As a result, the Edo Enzo will accelerate from 0-100kmh in 3.2 seconds and will push 390kmh for a top speed. Clearly it doesn’t go nearly as quick on water…. 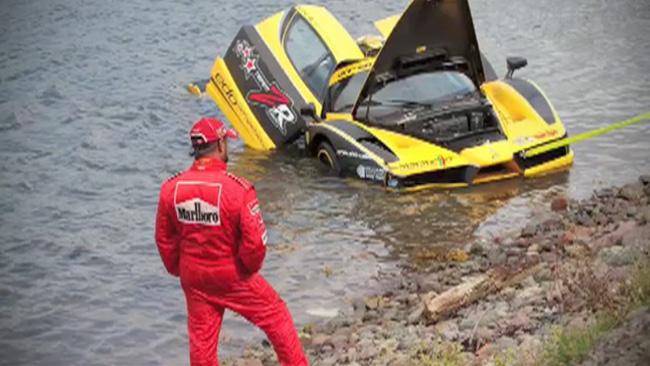