There are plenty of companies out there that can sell you quality products for your 4x4, and a few that offer not-so-good quality you should probably stay clear of. There’s only one company that offers a complete vehicle fit-out – top to bottom and bumper to bumper – all with its own engineered and branded products. Ironman 4x4 doesn’t sell products from other companies; instead, if it sees a need for a product in the marketplace, it engineers its own and either manufactures it or seeks out the right company to source it from.

Ironman 4x4 mightn’t be the oldest brand of 4x4 products in Australia, but it’s one that can trace its roots back six decades as it celebrates its 60th anniversary in 2018.

In 1958, Gunter Jacob was making leaf springs for trucks in a backyard shed in Melbourne’s eastern suburbs. He soon moved his fledgling business to a workshop at the back of a blacksmithing shop in Oakleigh, where Gunter would help the owner Harry Lark shoe horses in return for the rent on the shed.

It was no surprise that Gunter would be working as a spring-maker in a blacksmithing workshop; the Jacob family had been in the steel business in Europe since the 1950s, when they were in the scrap-metal trade. In the 1960s in Australia, spring-making was a growing trade as more and more people bought cars and trucks in the growing nation. 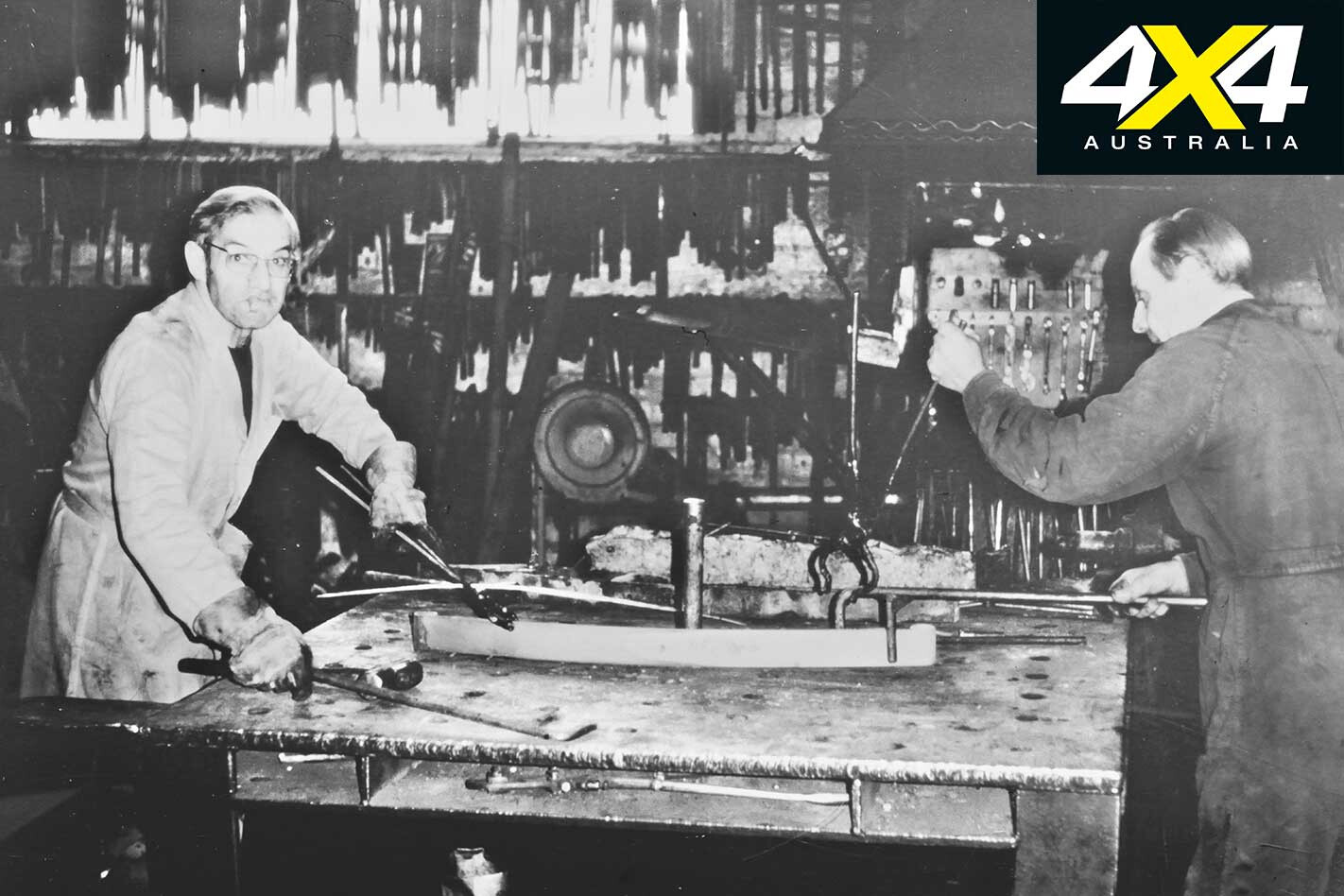 Gunter opened a second workshop in Oakleigh and established Jacob Spring Works (JSW) and, four years later, opened Dandenong Spring Works a bit farther east. At that time, 4x4s were mainly trucks like the Chev Blitz and other war-surplus vehicles like Jeeps, while Land Rover was an emerging brand. Using a 4WD for recreational use was almost unheard of.

The Australian Army was having troubles with the suspension on its Series 2A Land Rovers and approached JSW for a solution. Gunter redesigned the factory springs and shock absorbers to solve the fault, and JSW suspension went into the many Land Rovers in the army’s fleet.

The Land Cruiser FJ25 and the more popular FJ40 Series spread the popularity of 4x4s for both exploratory work and recreational use, but Tom Jacob recalls that it wasn’t until the 60 Series Land Cruiser was released in 1980 that recreational four-wheel driving spread further.

“The 60 Series was the first wagon that Australia fell in love with,” Tom told us at Ironman 4x4’s headquarters in Dandenong, Melbourne. “It became the replacement for the family vehicle that could tow a van or boat and discover Australia.”

Tom and his sister Barbara had both joined the family business just two years earlier and were witnessing the growth of the 4x4 as a privately owned family vehicle used for towing and exploring. More and more owners were coming to JSW for uprated suspensions to better support their 4x4 vehicles, and the business grew through the 1980s.

By the end of the 1990s, JSW was manufacturing and exporting suspensions to more than 20 countries globally.

Around 2003, Tom asked himself, “Why do so many people need updated suspension on their 4x4s?

“It was because they made the cars heavy,” he recalled. “They had bars and racks and accessories and luggage on the cars and they just weren’t able to carry the load. We thought that maybe we could supply the accessories as well.”

It was also around 2002-03 when JSW brought in two key employers that would see the company successfully make the move to the 4x4 accessories business.

“What Kristian Ristell and Adam Craze brought to the business was a real-world understanding of how a 4x4 vehicle should perform,” Tom said. “These guys were consumers and we started thinking less like a manufacturer and more like a consumer. This in turn allowed our product processes to change from not just making the best springs, to making what the buyers want.”

In 2003, JSW imported a container-load of 12-volt recovery winches that it had engineered to its own specification. Tom says they sold well, with auto-parts giant Repco taking the lion’s share of what was the first Ironman 4x4 product. It then became a progression of what products came next.

“We had a customer-base buying suspension for their 4x4s,” Tom said. “We asked them what accessories they wanted. We were already under the cars and now we were on the front of them as well.”

From the front to the rear and all points in between, the Ironman range has boomed and the catalogue now holds more than 400 products, each driven by what the customers demand.

Tom marked 2005 as the next major landmark in the business. “It was a really important year for us, for the 4x4 industry and for the direction of where 4x4s were heading,” he said. “The 2005 evolution of the dual-cab was the critical point.”

Dual-cab 4x4 utes are now among the most popular-selling vehicles in Australia and around the world. In line with that growth has been the number of Ironman 4x4 stores.

The first opened in 2014 in Ballarat and by the end of 2018 Tom says there will be 100 stores around the country. These stores are fed by massive warehouses in Melbourne, Brisbane, Townsville, Newcastle, Adelaide and Perth, while hubs in Thailand, the UAE and South Africa supply Ironman 4x4 retailers in more than 160 countries around the world. All the markets are different in what they want and need.

“The Middle East market is very different to Australia,” Tom told us. “It feeds the African market as well as the Gulf States and it is a dynamic, solutions-based business. We can supply end-to-end solutions for government, NGOs and fleet solutions in these markets.”

While Ironman 4x4 grows globally, it remains a family business. Both Tom and Barbara still work there and, earlier this year, Tom’s son Samuel joined the team.

The trade market is where Tom sees Ironman’s products; products that are affordable, dependable and functional for every person. “Affordability respects the fact that the average family should be able to go four-wheel driving, not just an elite few,” Tom added.

This stays true to the vision of what Ironman 4x4 has come to represent: great products, good value for money, and ensuring people can enjoy four-wheel driving safely. It’s a mantra that has seen growth for six decades, and with the third generation of Jacobs joining the business among a staff of more than 200 people nationally, we see that success continuing for many years to come.