In fact, the company began operations as Powerdown Australia more than 30-years ago when then managing director Bruce Gatgens developed his own range of shock absorbers for commercial vehicles.

The company’s current MD, Bruce’s son Mathew, explains: “Powerdown started in 1983. At that stage the company was specifically designing shock absorbers for trucks and buses… the ethos of the company was to design a product for Australian conditions because the trucks overseas at that stage were doing vastly different jobs – in different climates and different road conditions – to those in Australia. So back then, the managing director, which was my father Bruce, decided to design his own range of shocks for commercial vehicles.” Powerdown’s success in suspension systems for trucks saw it soon expanding into the four-wheel drive market. “We used those same design principles from the truck shock absorbers – we incorporated those into a 4x4 range,” Mathew says. “We have always been in the 4x4 space, but [the product] had been marketed under the Powerdown brand. So we didn’t really have the Raw 4x4 brand until about 2005 when we decided to make the four-wheel drive product its own entity.”

The 2015 Raw 4x4 catalogue is a massive 130-page tome full of springs and shocks to suit four-wheel drives built from the 1970s through to current models. “Yeah, it’s a killer, that thing,” Mathew laughs. One of the reasons it includes so many products is that Raw 4x4 offers various solutions for each model of four-wheel drive on the market.

“We’ll do probably three different levels [for each vehicle]: a light-duty, medium-duty and a heavy-duty specification,” Mathew says. “These days, that’s what you need to incorporate, because, as you know, a lot of people buy pick-ups and probably never have a bit of weight in the back, so they’re looking for more comfort, off-road ability… it’s more of a lifestyle choice, that sort of vehicle. Compare that to a Hilux on a mine site which is loaded with tools and plant equipment, [and you] need a heavier spec, so we look at that full spectrum and how the vehicle’s going to be used, and design componentry around that.” All of the suspension research and development carried out by Raw 4X4 takes place at the company’s state-of-the-art Beresfield facility, near Newcastle, New South Wales.

“We’ve got some of the best test facilities in Australia in terms of shock absorbers,” Mathew says. “We’ve got one of the largest (shock absorber) dynamometers, which is basically the same type as used by the Formula 1 teams… ”

So how does the team at Raw 4X4 go about developing a suspension system for a specific model? Mathew explains: “Firstly we get hold of the vehicle in its OE condition and we take it for a drive over various road conditions and off-road conditions, and get a general feel of how the vehicle reacts in different scenarios. Following that, we bring it back to our facility and simulate weight on the vehicle to see how the vehicle handles weight, simulating load bearing in terms of accessories such as a bullbar, a winch… depending on the type of the vehicle, what kind of weight would be in the back, if there’s a drawer system or heavy loads in terms of a pick-up. 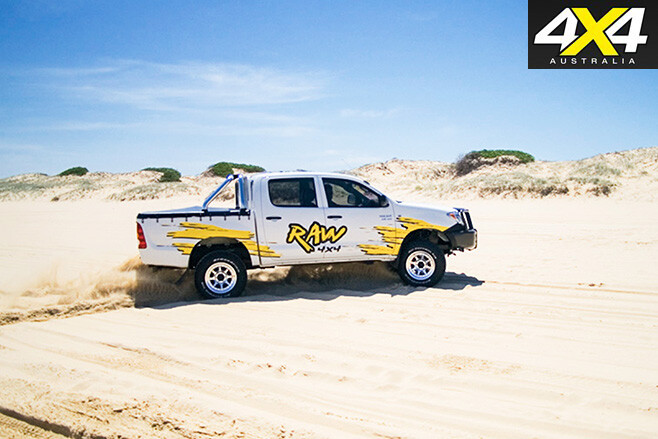 “So we’d simulate all that in its OEM condition and basically see what sag is on the vehicle and see what the springs can handle, and the drop in ride height etcetera, and also do a ride and handling analysis on the vehicle in various different states, so we can get a feel for it.

“We’d then pull the vehicle apart, test the shock absorbers, and also the coils and the leaf springs, to determine the spring rates, and then look at where we can improve upon the OEM mark.”

Mathew says there’s a team of four dedicated staff members working solely on the development of shock absorbers and suspension components, and they are kept very busy with a range of four different shock absorber models (Nitro, Nitro Max, Predator and RFX), including the relatively new Predator monotube-design range.

“The monotube side of things, it’s a growing side of the business. We only started manufacturing about three years ago our specialised monotube designs. We’ve got three people dedicated in that area,” Mathew says. Want a tailored solution for your four-wheel drive? Not a problem. “Basically we make a standard product as well as a custom-made product, so people who require something different, we’ve got the ability to re-valve the monotubes according to their ride requirements,” Mathew adds.

The Raw 4x4 brand is available all over Australia, so you know back-up is never too far away when you’re out bush. “We have dealers all throughout Australia,” Mathew says. “We deal with independents as well as chain stores including Fulcrum Suspension – they’ve got a network across Australia – and also through our truck dealership network, so we’ve virtually got reach all across Australia.” And what’s in the pipeline? “We’re working on a big strut range,” Mathew says. “It’s basically a truck shock absorber designed for Hilux, Ford Ranger and things like that, for heavy-working vehicles which are in demanding off-road conditions. It will be quite a large bore size as well as body size (for the oil capacity), and a custom spring to suit.”

Imagine how big the new Raw 4x4 catalogue will be once this new product hits the market!