Which suspension? It’s a damn hard choice to make. With so many variations on intended loads, terrains and expectations there’s no single correct answer, especially when you take into account how many 4x4s there are on the market.

After spending time trawling through the numerous articles on the net, talking to retailers and seeing what others were using and recommending, I noted early on that many ‘experts’ were using Australian-made Lovell springs, combined with a huge selection of shock absorber brands, from lowly online cheapies to top-of-the-line big bore and imported lines.

Monotubes, twin tubes and remote reservoir shocks; you name it, Lovells had kits on offer. Taking the hint, I fitted a set of Lovells springs and Gas Legends shock absorbers. 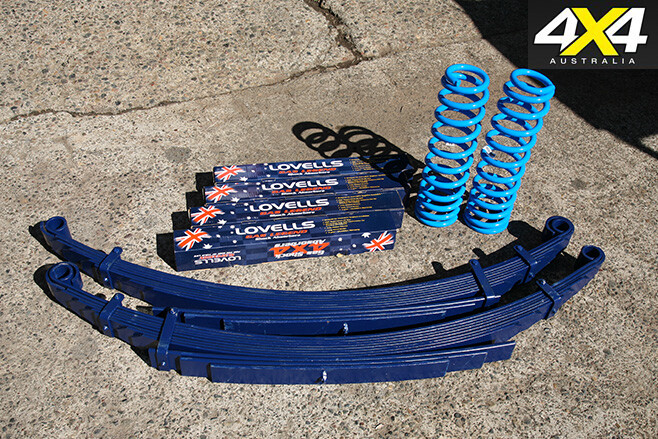 When you’re looking for aftermarket springs the trick is to put all your heavy gear on first: bullbar, winch, rear bar, rims, tyres, the whole lot. Sure, your 4x4 may sag for a while, but having all that weight on first will give you a good idea of which spring rates to choose.

From the Lovells catalogue I had the choice of three rear options of 50mm lifts in 100kg, 300kg and GVM constant incremental load rear leaf springs, of which I chose the 300s. This should allow a decent ride and flex (for a Troopy) when empty, when carting the usual camping gear for work, and right up to hauling the family and all the camping kit on larger trips.

I didn’t know whether the springs would maintain a level ride whilst towing my 2500kg caravan (with a ball weight of just under 200kg). While the ultra-heavy duty kit would do the job when fully loaded, it produces a harsh and jarring ride when the vehicle is empty. Instead, I decided to utilise an adjustable helper air bag when fully laden (if required). I decided to do an initial test and loaded the four kids, my long-suffering wife and a moderate amount of cargo, and hitched the van for a 400km trip. In the end, the rear set-up handled the load surprisingly well and managed to keep the whole thing close to level – perhaps the air bags won’t be needed after all.

I had an aching desire to flex the Troopy’s new suspension and dropped into my local test track to see for myself how much the firmer ride would allow those solid axles to tuck and drop. I wasn’t expecting gangly, long coil spring travel, but it was reassuring to see those heavy duty rear leaves tuck well into the rear wheel arches. The front coils allowed the 33in Coopers to maintain contact on the dirt in places where the Troopy used to lift its wheels. Up front, heavy duty coils were the best option to handle the weight of the Opposite Lock steel bullbar and Runva 11,000lb winch.

During my initial flex test, a few short dirt road jaunts and hauling the van on the blacktop over 400km, the Lovells Gas Legend shocks controlled the narrow, top-heavy roof-top-tent-laden Troopy with ease. 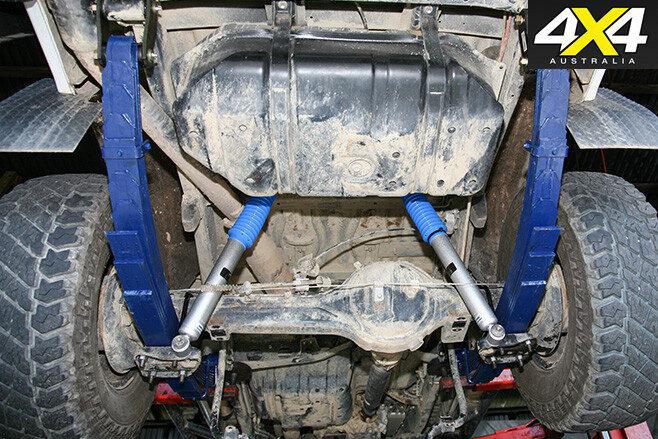 The ride quality is firmer than the original kit resulting in less body roll, less jarring and more comfort – a hard act for a commercial-based vehicle. The design of the rear leaf springs has a lot to do with this; Lovells utilise 11 leaves in its 300kg constant load kit, set up with the three lower, thicker load bearers perfectly curved to match the shape of the eight longer, thinner main leaves.

In standard eight leaf set-ups, the two thicker, lower load bearers are dead straight which results in more severe initial contact with each bump, however the Lovells offer a more progressive firm ride. The curved lowest leaves also have less chance of snagging on obstacles when 4x4ing – a huge advantage when you’re out on the tracks!

The complete Lovells kit includes all the little, often forgotten parts that make up the complete improved suspension system. The brake proportioning link spacer and a handbrake extension bracket are the two main forgotten parts, while greaseable shackles and pins, plus new urethane bushes and U-bolts round out the inclusions.

Lovells can also supply upgraded GVM kits for some pre-registered and post-registered 4x4s, which would be ideal for constantly-heavy-loaded 4x4s towing large vans but would be too harsh when empty. The Gas Legend twin-tube, long-travel shocks are gas-charged, have a large 60mm outer body, 36mm bore, 18mm shafts and feature multi-stage valving. The firmness of the shocks alters in relation to speed, velocity and terrain, allowing for progressive damping during the cycle of the piston, regardless of speed. The Legends include internal bump stops for both compression and extension to prevent damage, as do the internal and external 2mm thick walls – great for when your truck is thundering down debris-strewn tracks with dent-inducing projectiles!

All shock eyes and pins are fully welded, quality Fuchs brand oil is used, and heavy duty bonded rubber eye bushes with crush tubes are utilised. This, in part, allows Lovells to offer a huge three-year/70,000km warranty on all their shocks (and struts), while both coil and leaf springs come with an even longer five-year/unlimited km warranty – you’ve gotta be happy with that!

I’ve opted not to fit a Lovells caster correction kit. Given previous experience, and on the advice of the fitters at Momentum 4x4 in Wauchope, a simple two-inch suspension kit often doesn’t require it; although, some do need it to rectify the potential slight steering vagueness. Before and after measurements of ride height indicated an all-round 80mm lift from sagged, standard height. And rather than buying (potential) mismatching shocks and springs from different manufacturers and suppliers, I’ve chosen a damn great set-up for my many needs: ride height; on-road handling; off-road ability; passenger comfort for both on- and off-road use; load-carrying capabilities; and all-round longevity.

Don’t forget that Lovells is an Aussie company and is arguably the best in the business when it comes to suspension. I am proud to be supporting a long-standing Australian business and stoked to be using the well-known ‘Navy Blue’ Australian steel on my Troopy.

Available from: www.lovellsauto.com.au
RRP: Varies depending on kit and vehicle type.
We say: Quality, Aussie-made suspension is hard to beat.