With only two examples of this 1000cc super-sport beast in the country at the time, Yamaha erred on the side of caution and told us we’d have to wait another couple of months for a drive.

True to his word, Yamaha’s PR man Sean Goldhawk soon invited us along to experience the YXZ for ourselves.

So what is the YXZ1000R? Think lightweight, compact buggy powered by a potent 998cc engine out of a top-spec snowmobile and kitted out with long-travel suspension with top-shelf Fox racing dampers. In other words, the YXZ1000R is designed to go seriously fast over the kind of terrain you’d find only on an off-road racing course, which is precisely where Yamaha had brought us. We were at the Sydney Off Road Racing Association’s (SORRA) facility at Colo Park, north-west of Sydney. The track features a couple of long straights, a big jump, a series of whoops, a couple of nicely banked berms and some off-camber sandy corners.

Driving any ROV requires one to don the correct riding/protective gear, and in the case of the YXZ that included a helmet, goggles, gloves and long sleeves. Once appropriately attired and settled into the contoured bucket seat, the driver is fronted with a small-diameter sports steering wheel, an instrument panel with a massive tacho, bright shift light and digital speedo, a stubby lever for the sequential-shift five-speed gearbox and a big park brake lever. It’s definitely all business in this cockpit, with the only conveniences a centre storage bin and latching glovebox on the passenger side.

With seat adjusted and buckle clasped, I fired up the engine and was surprised by the muted response; the muffler does a good job at keeping engine noise in check, although there’s a nice raspy sound to the exhaust note that only an inline triple can produce. I was read the riot act and told to obey my co-pilot, who in this case was Daniel McKenzie, an off-road riding coach with loads of experience in this arena. I selected first gear, built up the revs, eased out the Rekluse clutch and made my way to the track entrance. After a pause to check for traffic, we headed out on to the main straight. The engine is a ripper with loads of torque from low in the rev range to the mid-range. Daniel instructed me to upshift with an obvious hand signal, so we were up into third gear and doing around 70km/h by the time we reached the first set of whoops. I tested the brake response before the suspension soaked up the first hard-packed whoop like we had driven over nothing more than a soft cushion. After the whoops we rode high around a left-hand berm and then Dan instructed me to turn in early and hit the go-pedal. After a little slide from the rear-end, we got up to around 80km/h in fourth gear in no time at all and, before I knew it, it was time to downshift again for another left-hander before we were back on the gas and accelerating along the main straight towards the jump.

Dan kept me over to the left and yelled “keep it smooth” as we approached the jump at about 60 clicks. I doubt we even got air at that speed as the landing felt like little more than a soft compression, with beautifully controlled rebound. I was treated to another three laps, gradually building up pace and becoming more accustomed to the YXZ, before it was time to let someone else have a go. The YXZ’s inline triple is based on the engine used in Yamaha’s FX Nitro MTX snowmobile. It’s a high-performance DOHC powerplant with three Mikuni 41mm throttle bodies, 11.3:1 compression, a 10,500rpm redline and dry-sump lubrication. Due to the generally dusty terrain in which the YXZ operates, there’s a dual-stage air filter, with an oiled foam unit the primary element and a paper filter the secondary stage.

While other manufacturers equip their ROVs with constantly variable transmissions (CVTs), Yamaha has opted for a five-speed manual sequential-shift gearbox in the YXZ, saying it results in better response with instant transfer of power to the driving wheels. The front diff features a torque limiter for overload protection and there’s a low-maintenance rear-diff-mounted parking brake. The four-wheel drive system offers 2WD, 4WD and 4WD diff-lock.

The YXZ offers an impressive 330mm of ground clearance and, if that’s not enough, the underside is protected by tough, 4-6mm thick thermoplastic olefin (TPO) guards. 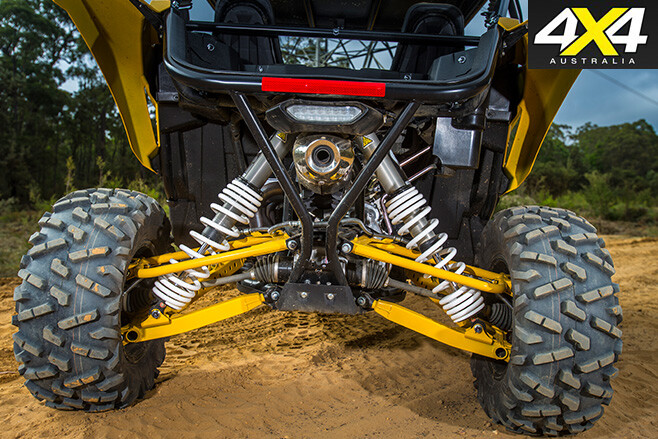 The fully independent suspension has long A-arms with optimised castor, bump steer and Ackermann throughout the travel and steering angle… and there’s a hell of a lot of travel, with 406mm up front and 432mm at the rear. While you might think $30K is a lot, the top-shelf Fox racing shock absorbers are a good example of where your money goes.

These position-sensitive shocks offer an additional 3000lb of damping force in the last 25 per cent of the stroke, which is the key to preventing bottoming-out when landing big jumps or hitting big obstacles. Their large-diameter bore and remote reservoir design means there’s plenty of oil capacity for good cooling and performance in harsh conditions, and the dampers also offer preload adjustment, high- and low-speed compression adjustment, as well as rebound adjustment, so they can be perfectly tailored to conditions.

As ROVs run relatively low tyre pressures (around 14psi), the aggressive 27x9.0in R14 front and 27x11.0in R14 rear Maxxis tyres are held on to the YXZ’s alloy rims with bead locks to keep them on the rims. On the dry SORRA circuit the tyres offered plenty of bite, even out of the soft sandy corners. After a few off-road runs on another of the facility’s tracks in a Yamaha Wolverine, I headed back to the fast circuit for my second run in the YXZ1000R. This time, I felt far more confident and started to get more air over the jump and more sideways action in corners, but with a co-pilot instructing me to short-shift at around 5000-6000rpm, I didn’t get the chance to really sample this racer’s full potential until the end of the day, when Yamaha had a special treat for us: a high-speed run in the YXZ with an off-road racing professional behind the wheel.

Now, I’m not a good passenger at the best of times, but a full-tilt run around a narrow and bumpy race track edged with big trees, in a vehicle without doors, piloted by a bloke who I’d only just met, was, well, somewhat exhilarating. It showed me just how fast and agile this little beasty can go!

It’s not just the engine performance of the Yamaha YXZ that makes it such a blast but the way it can be thrown around in corners, the way it handles off-camber bends, and the way it soaks up big bumps and jumps. Racers I spoke to at this event reckon the YXZ1000R is faster than many bespoke off-road racing buggies worth at least three times as much. 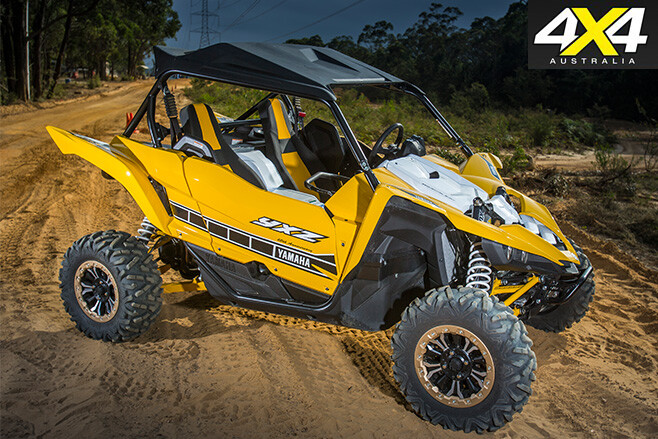 EXTRA GOODIES
For those who want to personalise their YXZ1000R, Yamaha offers a range of accessories including:

The YXZ1000R is available in two models: the Team Yamaha Blue is $29,999 and the 60th Anniversary Yellow is $31,999. That’s a fair bit for a vehicle that can only be driven on private land, but Yamaha is not waiting around for legislation changes to build a market for the YXZ.