Australian tuners are preparing for the Chevrolet Camaro

THE 750KW HENNESSEY Exorcist will spearhead a V8 invasion of muscled-up Chevrolet Camaros, as the nation’s starved GM fans prepare for the car’s imminent arrival.

As the Ford Mustang – previously free to gallop the local sales plains uncontested – also prepares to face its US foe on Aussie soil, local GM tuners are stocking up on superchargers, exhausts and other go-fast hardware hot from the USA and in some cases, developed locally. 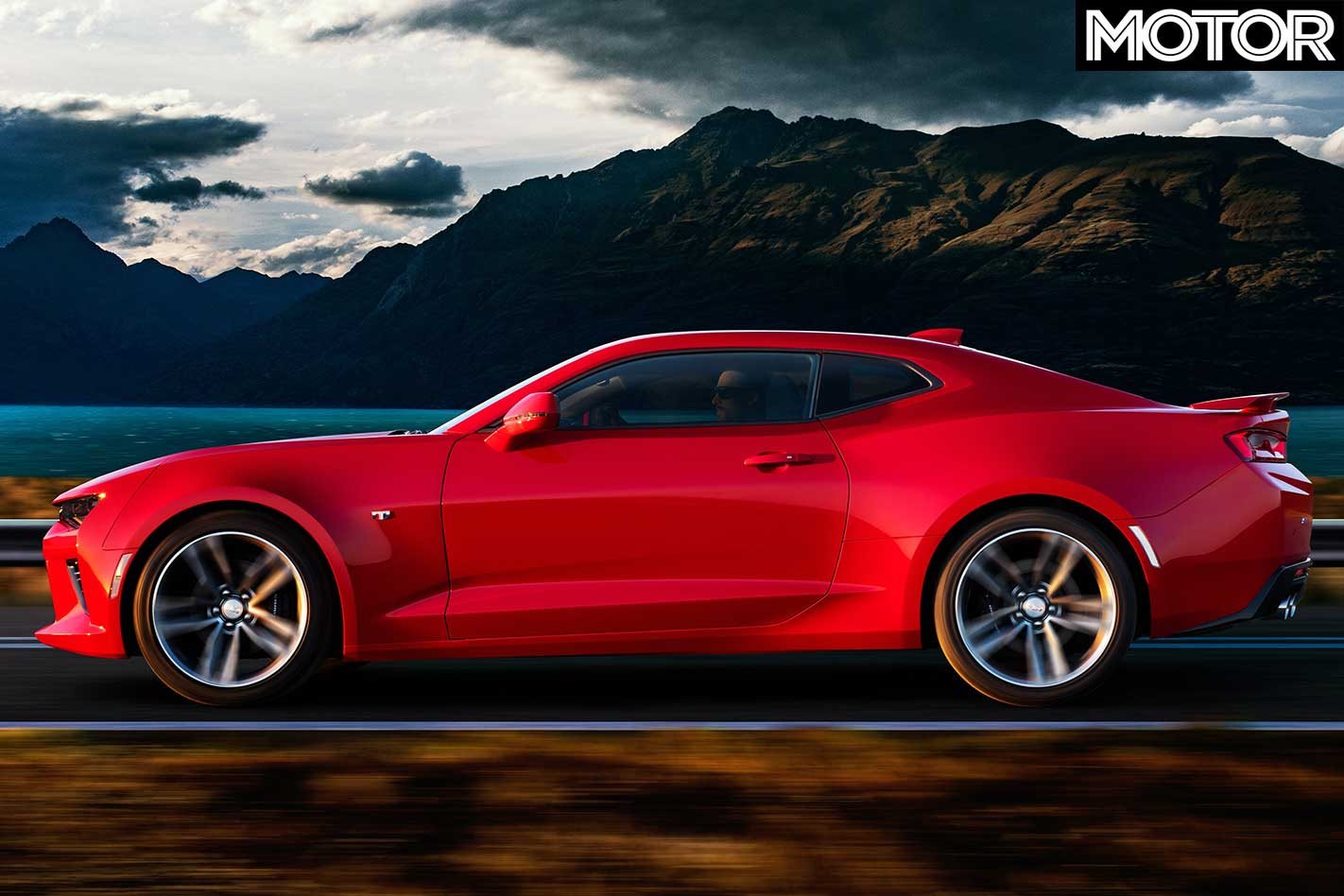 The nation’s leading GM tuners in Harrop, KPM Motorsport, Tunehouse, VCM Performance and Walkinshaw Performance are all preparing offerings for The General’s LT1-powered ponycar, also helping to soothe the angst of Australia not yet being able to get its hands on factory LT4-powered tyre-fryers such as the supercharged 6.2-litre 485kW Camaro ZL1 and ZL1 1LE.

But it’s the Exorcist that will sit atop the V8 pecking order, at least initially, its 750kW supercharged LT4 V8 launching the rear-drive coupe down the quarter mile in an eye-watering 9.8 seconds, going on to a top speed of 350km/h – if you dare, that is.

The Exorcist will be offered by exclusive Hennessey distributor KPM Motorsport, based in South Australia, which also offers its Street Fighter brand of aftermarket enhancements. David Roscio of KPM Motorsport confirmed one lucky Aussie had already put their name down for an Exorcist despite what is likely to be a circa-$240,000 pricetag. 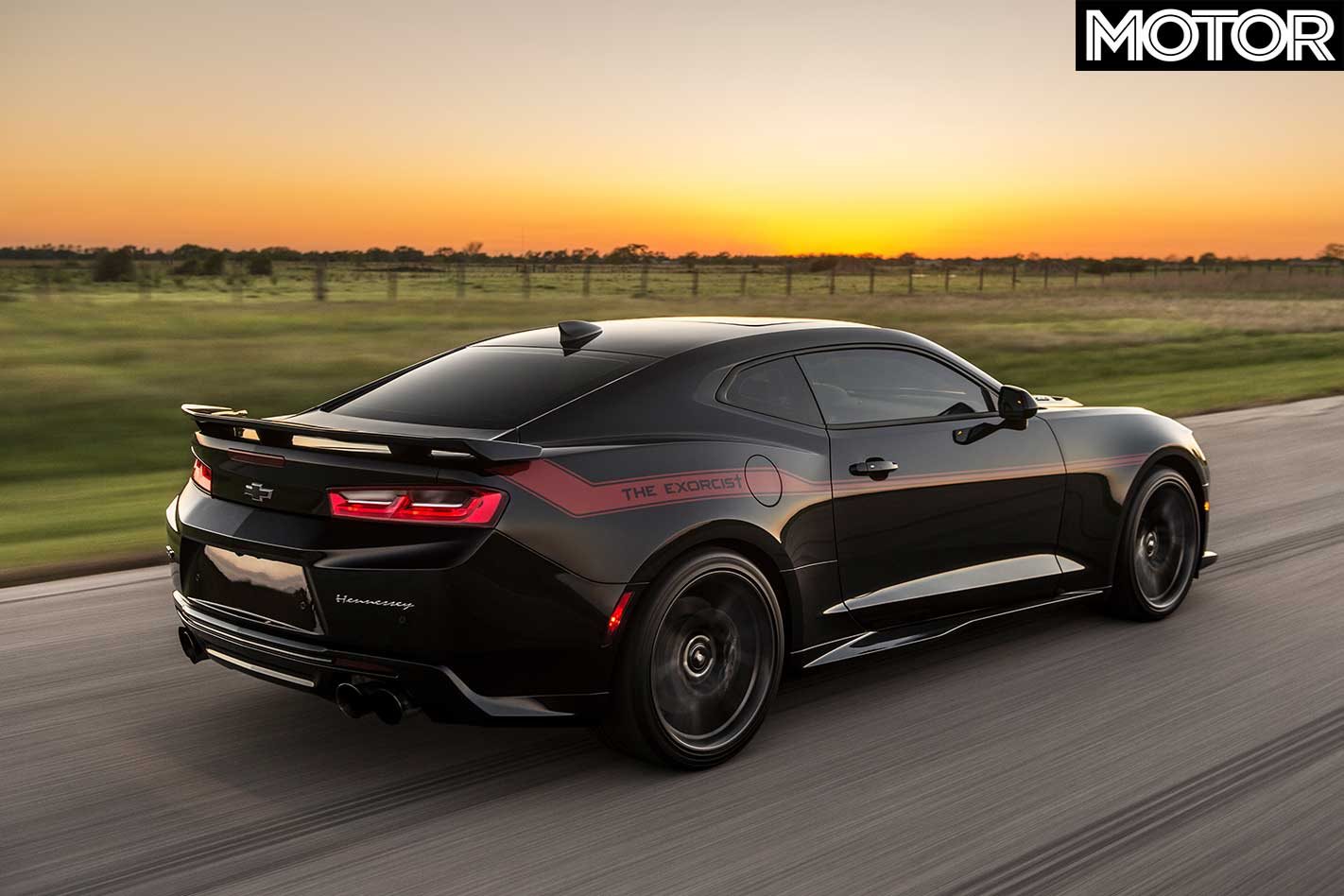 “Because the Exorcist is built on a factory supercharged ZL1 model as its base, it is a separate import process to the HSV Camaros,” said Roscio, explaining that an HSV-converted Camaro SS, with its LT1 powertrain, could not become an Exorcist – you would need to import a ZL1 with the LT4 V8. KPM Motorsport will sell the Exorcist with a 100,000km, three-year warranty, plus ADR approval.

Despite the Exorcist being a ZL1-only proposition, Hennessey will vie with other Australian tuners with upgrade packages for the LT1 engine found in the Camaro SS to be converted by HSV.

On top of its 370kW and 445kW naturally aspirated packs for the LT1 V8, KPM Motorsport will also offer Hennessey’s supercharging options for that engine, ranging from 480 to 750kW, meaning if you want Exorcist levels of power, you needn’t start with a ZL1. Hennessey claims its HPE1000 supercharged LT1 Camaro SS is capable of sub-10 second quarter miles, sub-3.0sec to 100km/h and a top speed beyond 350km/h. 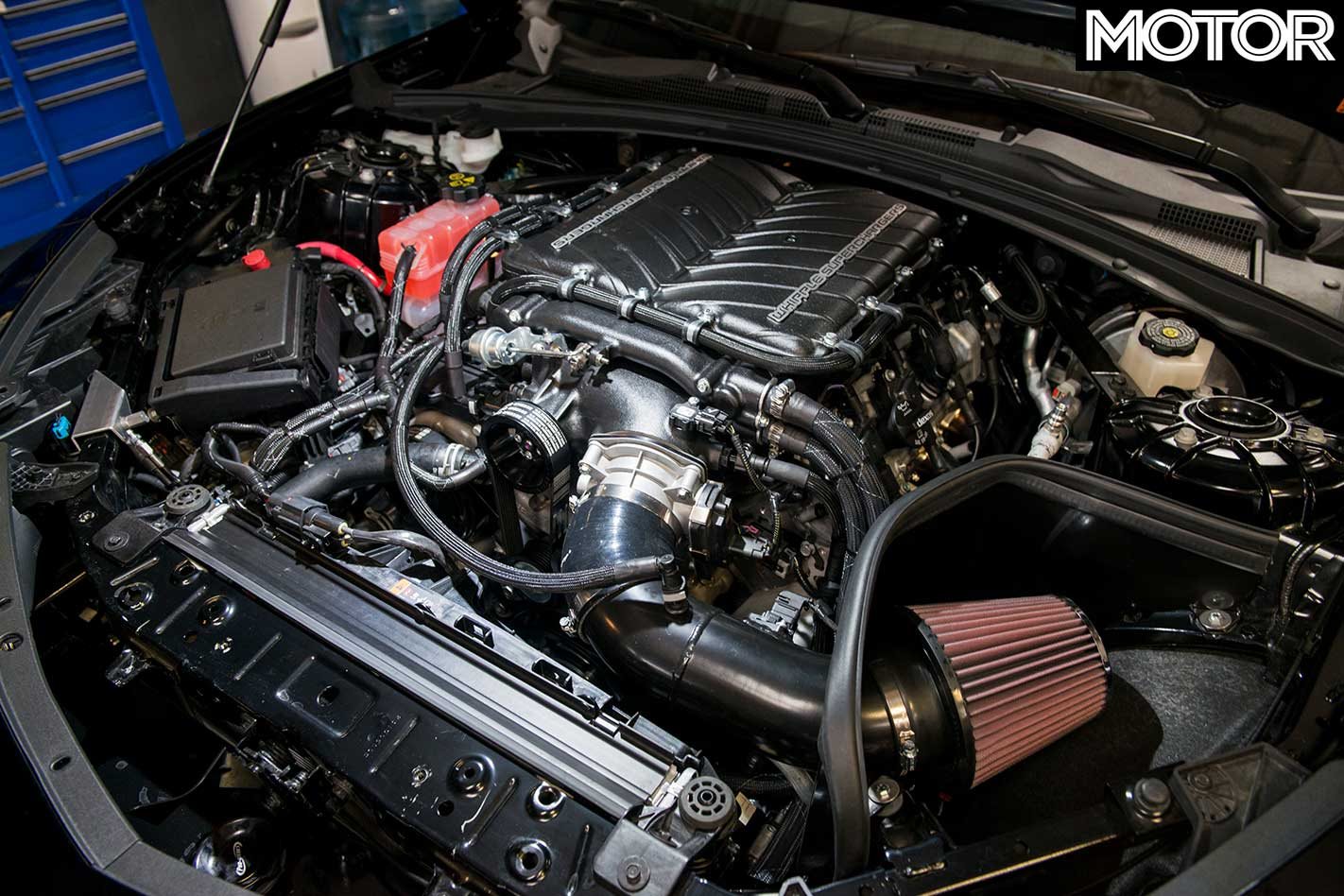 Roscio said as well as Hennessey upgrade packs – considered the more premium modification brand – KPM Motorsport would also offer a Street Fighter range of enhancements for the Camaro. “There will be three stages of naturally aspirated power packages, then two or three stages of supercharged upgrades, all ADR approved,” he said.

Taking on Hennessey and Street Fighter with its own upgrade options, world-class Aussie aftermarket firm Harrop Engineering is developing superchargers for local Camaro owners for whom the SS’s 339kW/617Nm is not enough – but also gear that lets the LT1 breathe freer for those who love their V8s naturally aspirated.

Harrop’s four-lobe FDFI superchargers have offered bolt-on boost for a range of cars throughout the years, and the direct-injected LT1 in the sixth-gen Camaro will be no different. “From our point of view the Camaro is really a continuation of the Gen-F HSV and LS3 Holden platform,” Harrop General Manager Heath Moore told MOTOR. 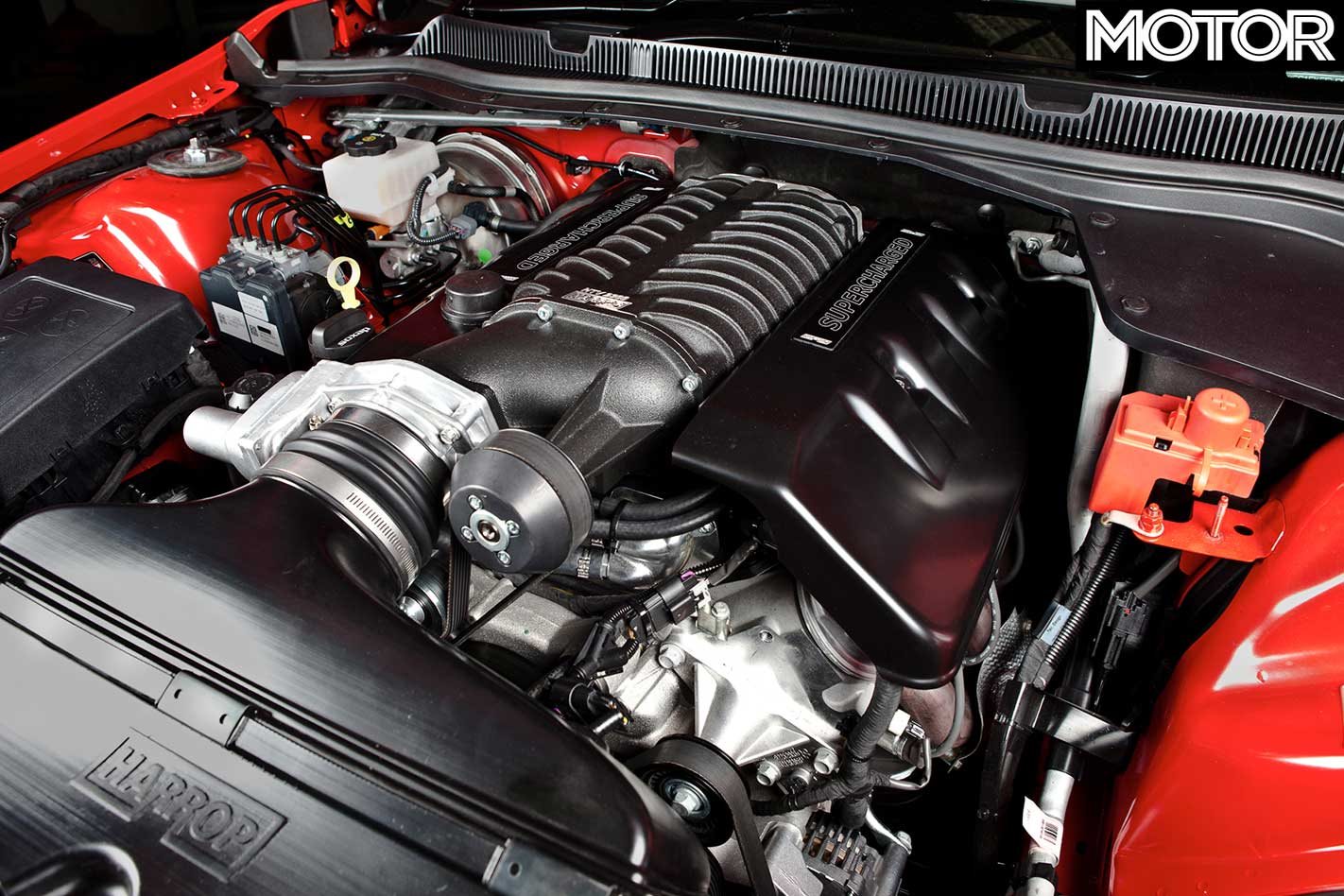 “We have supercharger development running now – in Australia and America – around the LT engines and we are focusing on the FDFI 2650 unit. This is the biggest blower core Eaton makes and is found on the 563kW LT5 engine in the 320km/h ZR1 Corvette.

“We’ll be able to turn the FDFI 2650 at a milder RPM to suit a stock or mildly modified LT1 engine, but the owner will be able to turn that up later if they do more engine work. We’ll also have naturally aspirated performance packages and exhaust packages.” 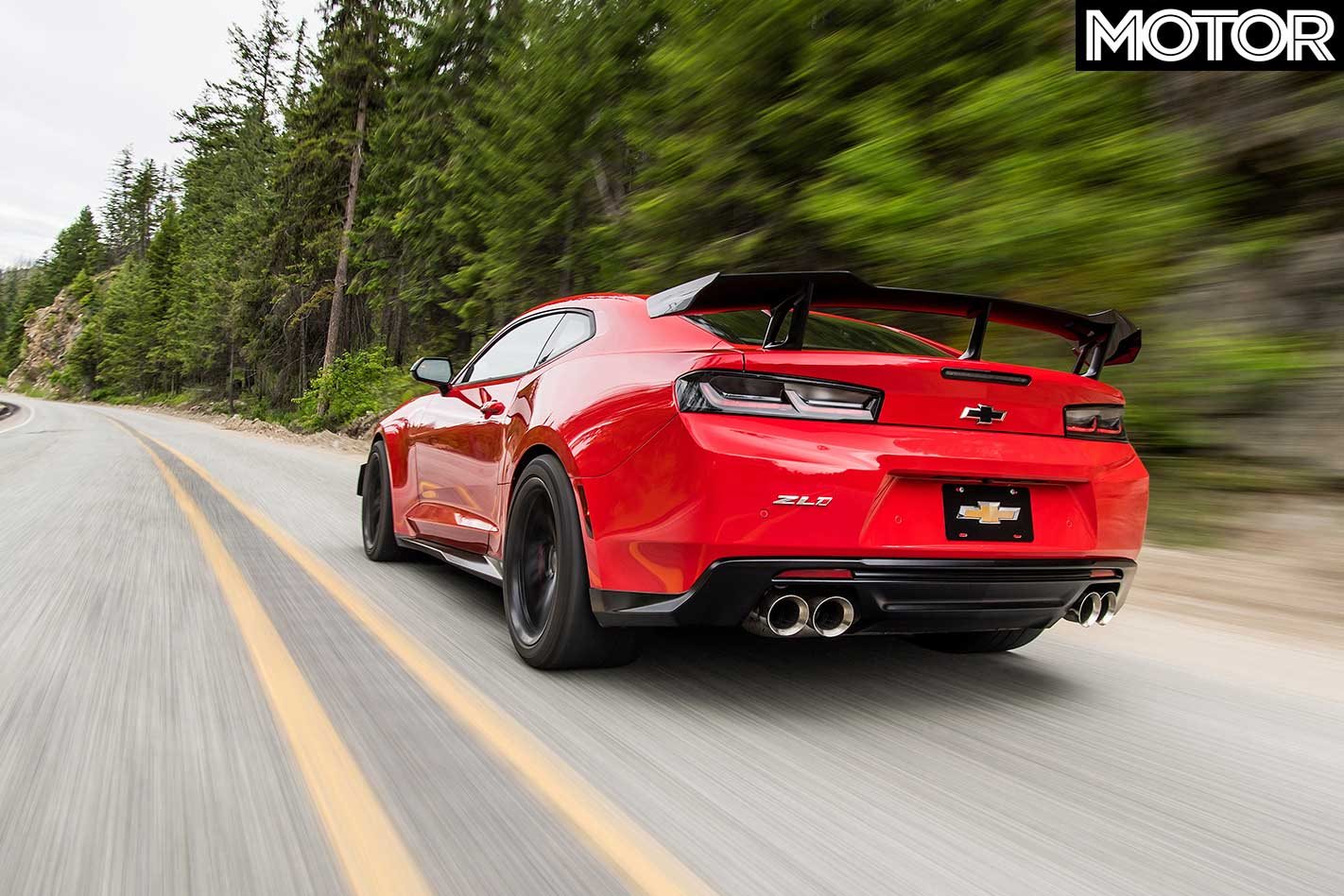 “We will likely look into an Ultimate-level brake kit and we’ll also likely have a TruTrac limited-slip option for the differential,” he said. “Our partners at Forgeline Wheels have huge experience working in this field, and we have styling providers we work with who can potentially offer aesthetic upgrades.”

Back at Clayton in Melbourne’s south-east, for those keen to keep their modified Camaro in the Walkinshaw family, the best prospect for appearance and performance upgrades is HSV’s aftermarket partner Walkinshaw Performance.

Although there is no official comment because of the delicate Intellectual Property arrangement with GM and Holden, it is understood WP will offer performance and appearance enhancements shortly after launch. 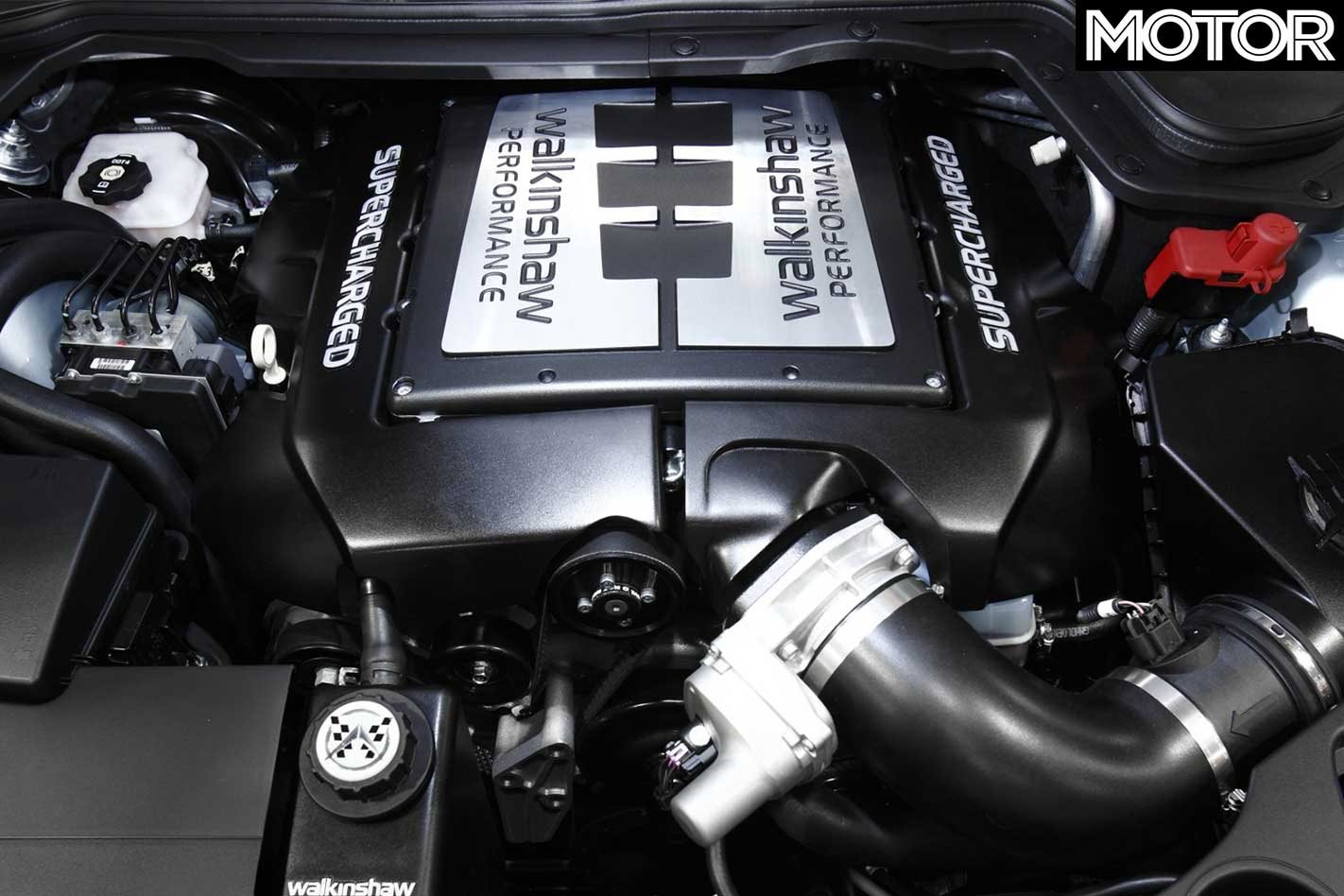 In the US, Chevrolet competes in the aftermarket with its own licensed Performance range of Camaro SS upgrade gear. Chevrolet even markets a Drag Race Development Program selling parts that boost the LT1 SS’s quarter mile potential to a claimed 10.5sec at 205km/h, with validation requiring more than 400 passes at 600-plus horsepower.

Elsewhere in Melbourne, VCM Performance will compete for Camaro business with its HP Tuner software upgrades and Magnuson superchargers. 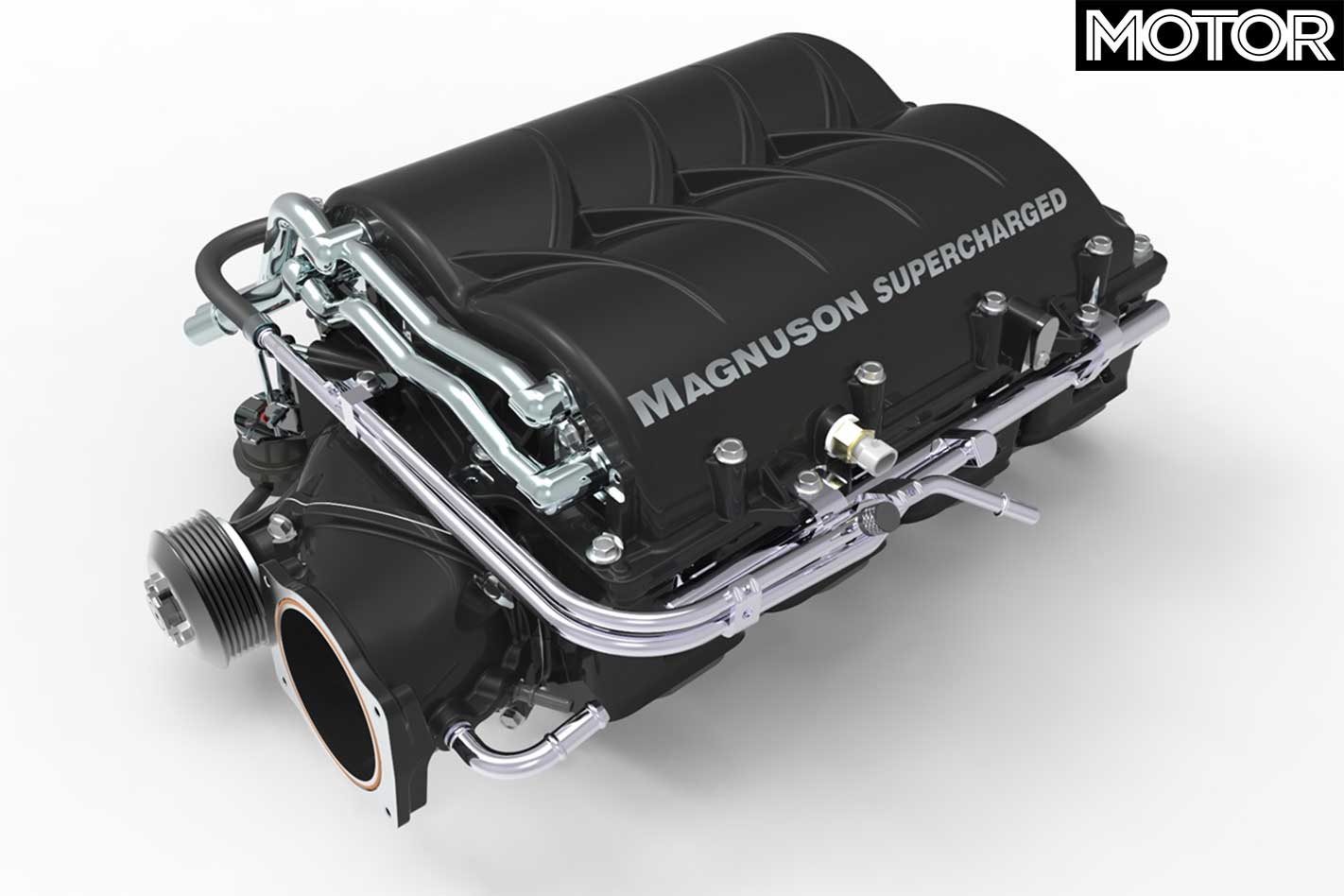 “We have a supercharger kit in stock and ready to go,” said VCM’s Mario Pancione. “It is a Magnuson 2300-sized four-lobe kit set-up to bolt onto the LT1, and should be on the market for around the same price as the Heartbeat kits we sell for Commodores. We are actually waiting on our own Camaro to be delivered so we can build a demo car.”

Suiting those perhaps stepping out of a Clubsport R8 LSA, the Magnuson 2300 will supercharge the LT1 Camaro SS to beyond 400kW with 6psi of boost.

Pancione said as Australian distributor of software tuning brand HP Tuners, VCM is busy working on related upgrades for the HSV-converted Camaro. As with any tuner, VCM must ‘crack the code’ of not only the the direct injection fuel system, but the eight-speed auto transmissions. 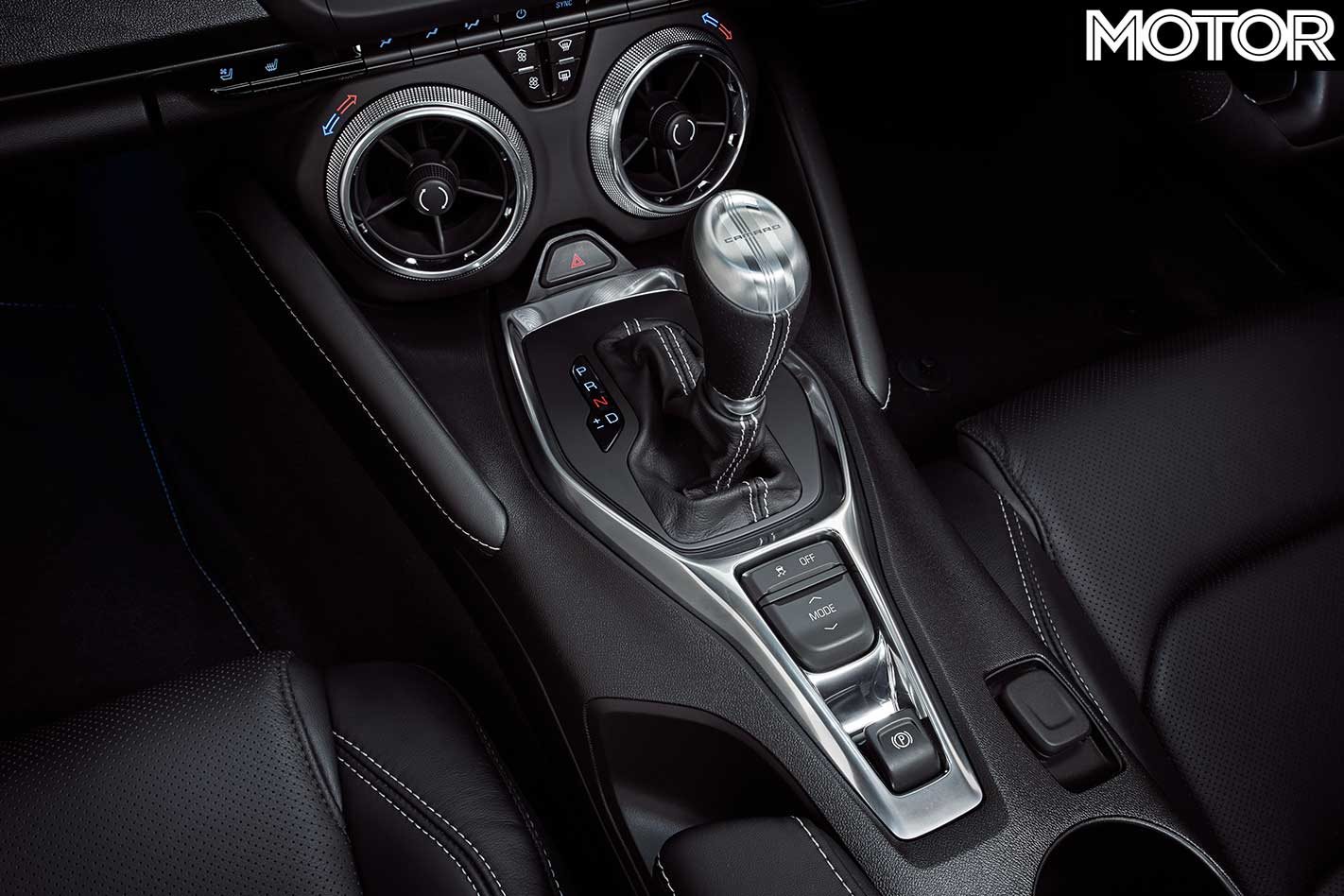 VCM had been spied fiddling with a ZB Commodore for reasons previously mysterious, but now clearer: “The transmission control unit (TCU) in both the new ZB Commodore and the Camaro needs to be unlocked,” explained Pancione. “The ZB Commodore uses the exact same TCU as the Camaro right down to the part number, so we have unlocked that in preparation for tuning Camaros.”

VCM is well known in the LS tuning world for developing new cam grinds that unlock huge power in the Chevy small-block engines, including reverse-pattern cams that suit forced-induction combos.

However, with only a limited number of Camaros coming, cam junkies should not expect to see a huge range of cams to suit Gen V engines pop up overnight. “We will look at developing cam grinds in time,” said Pancione. “We will see what the market response to the Camaro is first.” 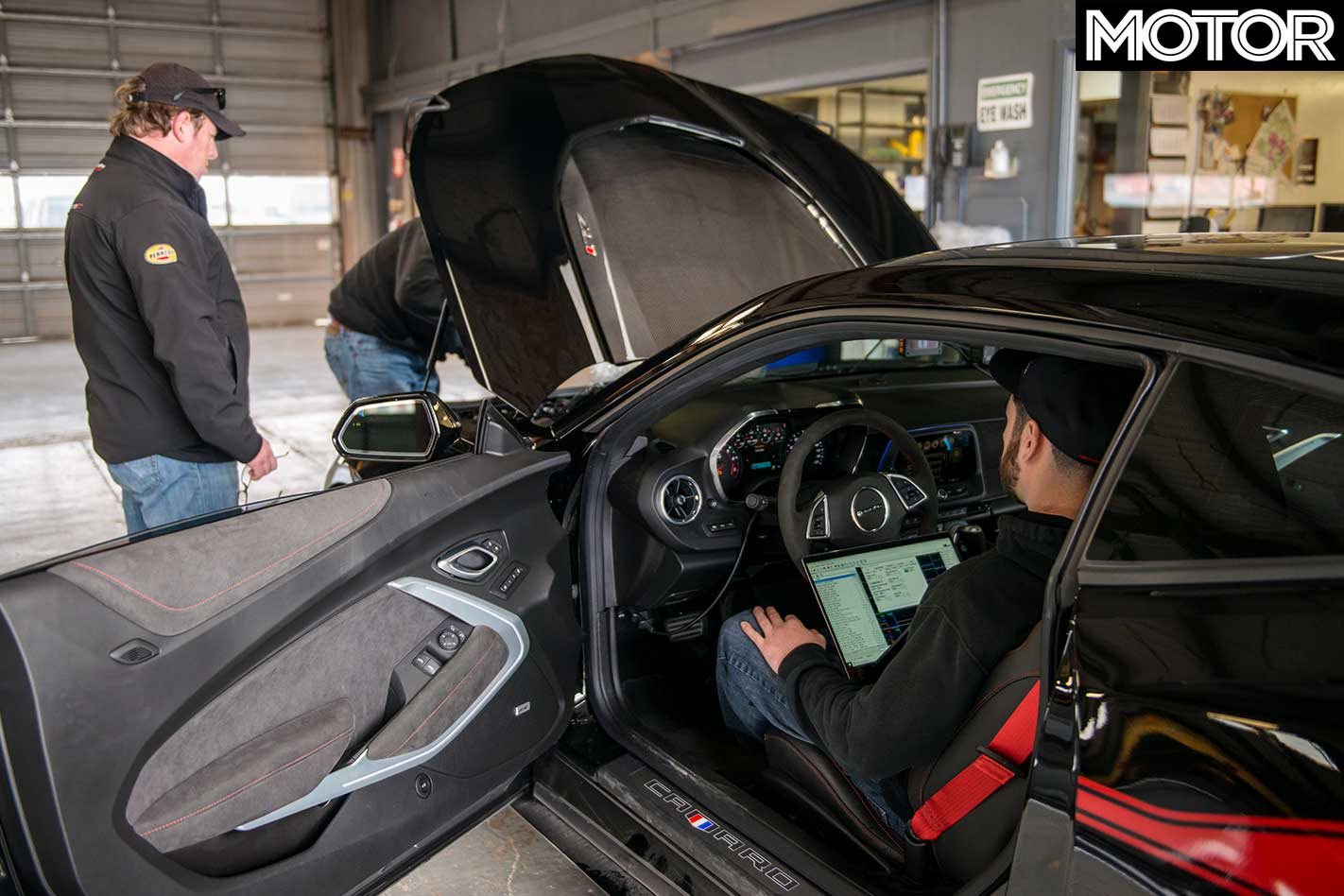 Sydneysiders needn’t fret for a lack of local tuning providers with Tunehouse in Marrickville jumping into the fight. “People are talking about these cars and we will work with various companies to develop packages under the THR brand,” said head honcho Jim Ghelis.

“This means suspension and brake upgrades, and leaving engine upgrades to bolt-on parts to avoid opening them up. We have a lot of options for R&D cars and we will get in and get them done, but we are going to run our own journey, like we always do, and develop our own packages.” 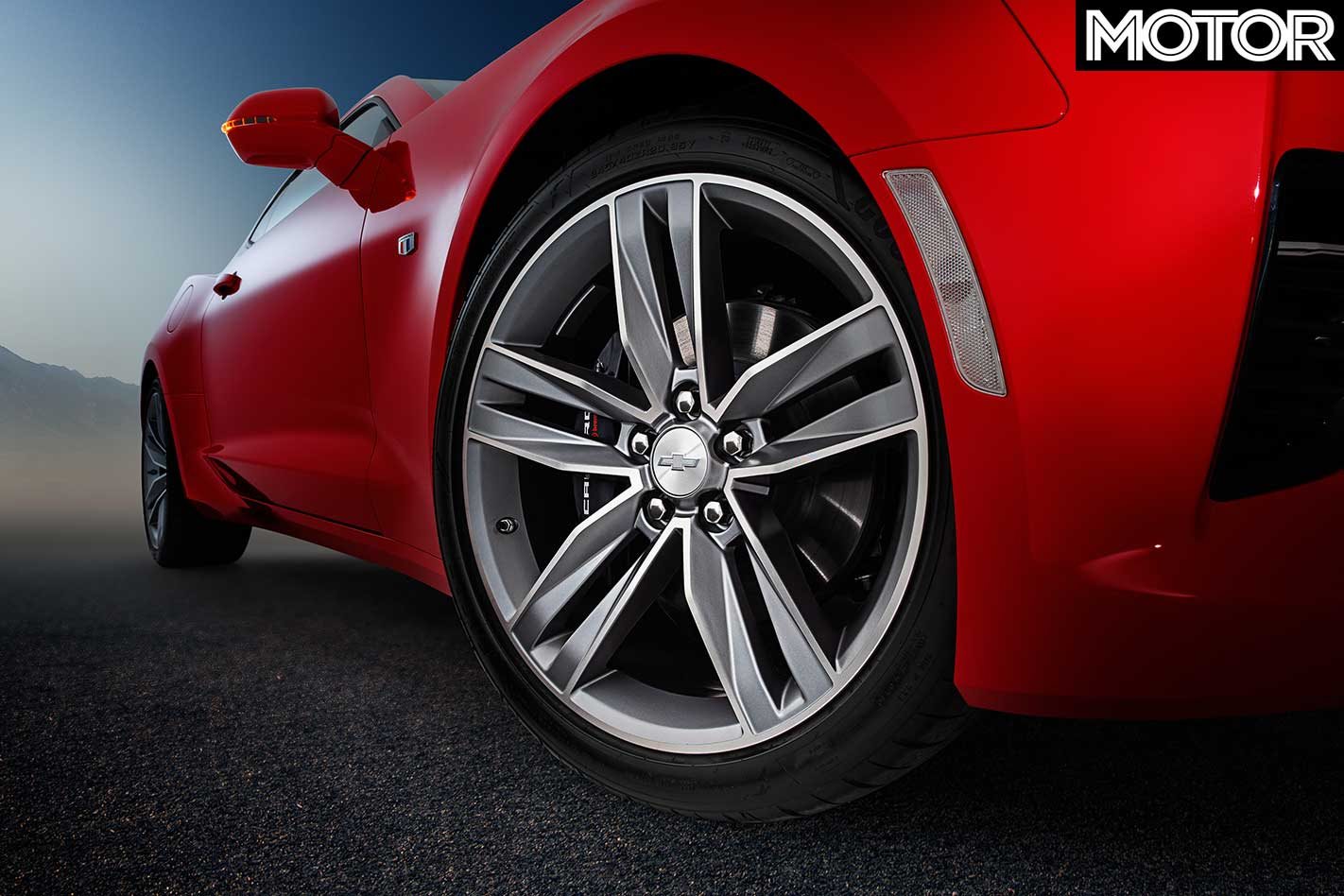 While power upgrades such as superchargers and software tuning are obviously high on the agenda for Camaro owners and tuners alike, expect to see a tsunami of aftermarket wheel options in Camaro-friendly fitments from ubiquitous brands such as ROH.

Suspension lowering options and upgrades are expected from brands such as Eibach and, more locally, Whiteline. For those who just want a little more herbs and perhaps sound without overdoing it, K&N Air Filters will offer an OE-quality cold-air intake.

What’s plain to see is if you have an HSV Clubsport R8 LSA, or GTS, and the lease is almost up, it will be far from difficult to replace it with a right-hook Camaro converted to OE standards by HSV, with a lazy supercharger bumping power to safe or psychotic levels – or even a snarling, enhanced naturally aspirated V8 sweetheart. Enough to scare the horses, whichever route you take. 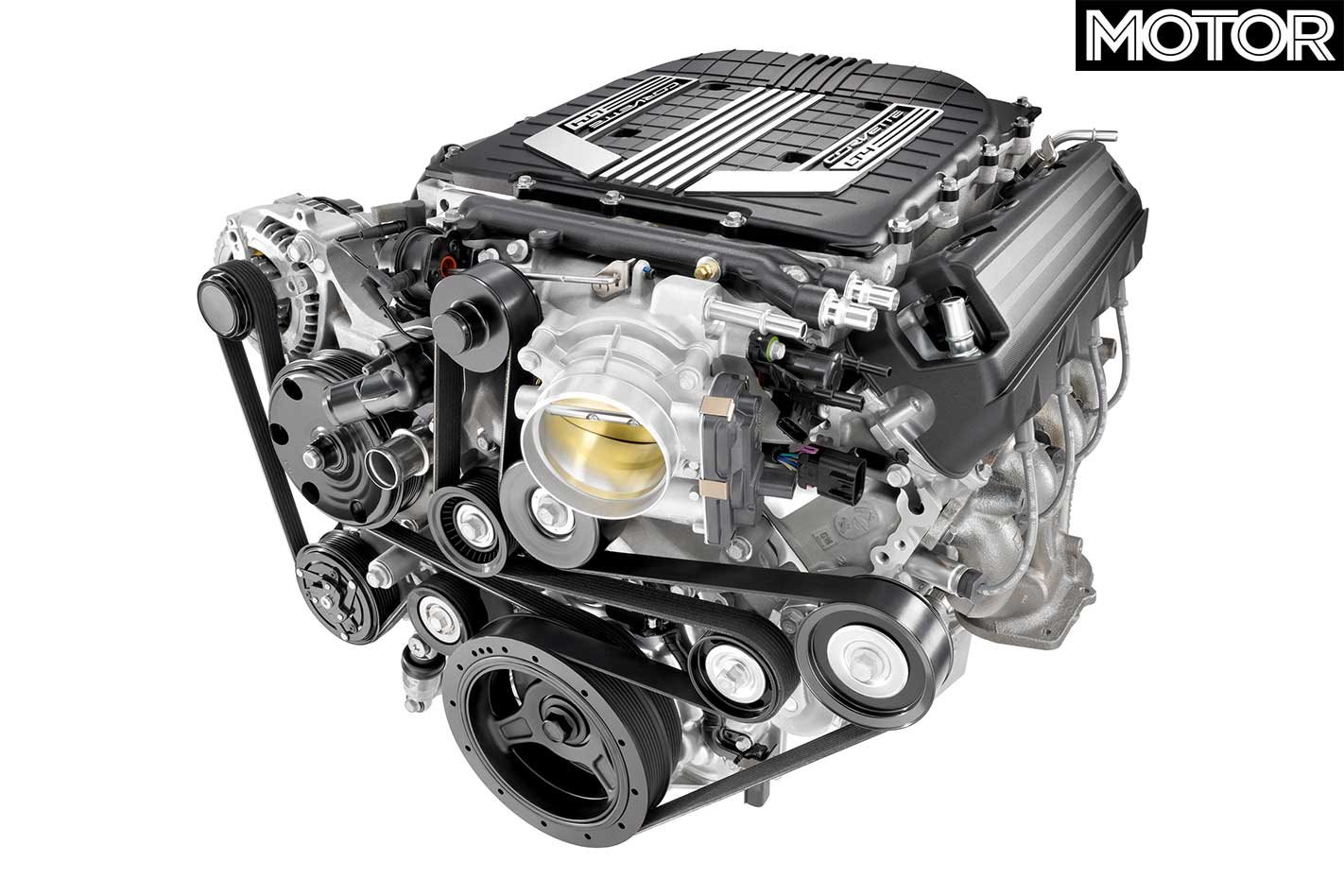 The sixth-generation Camaro sees the new Gen V LT small-block V8 slotted between the rails, boasting significant technical upgrades like direct injection and variable-rate oil pumps over the old LS-series engines we’ve had in Holdens since 1999.

The engine’s basic architecture carries over from the Gen IV LS3 with aluminium block and cylinder heads, 90-degree vee, 103.25mm bore and 92mm stroke, and a displacement of 6.2 litres. However, there are less than a handful of parts which interchange between the LS motors and the new LT1 and LT4 used in the sixth-generation Camaro.

While the LT1 runs a 11.5:1 compression ratio for snappy performance on various grades of fuel, the 485kW LT4 drops to 10:1 to deal with increased cylinder pressures from the new 1.7-litre Eaton four-lobe supercharger (made more compact to improve bonnet clearance). The LT4 also uses forged internals and an upgraded valvetrain to handle the huge 650hp, including a dry sump oil system and variable-rate oil pump.

There is also the 563kW LT5 V8 on duty in the new ZR1 Corvette, boasting a massive 2.65-litre supercharger. However, this is unlikely to appear in Camaro in the next 12 months. 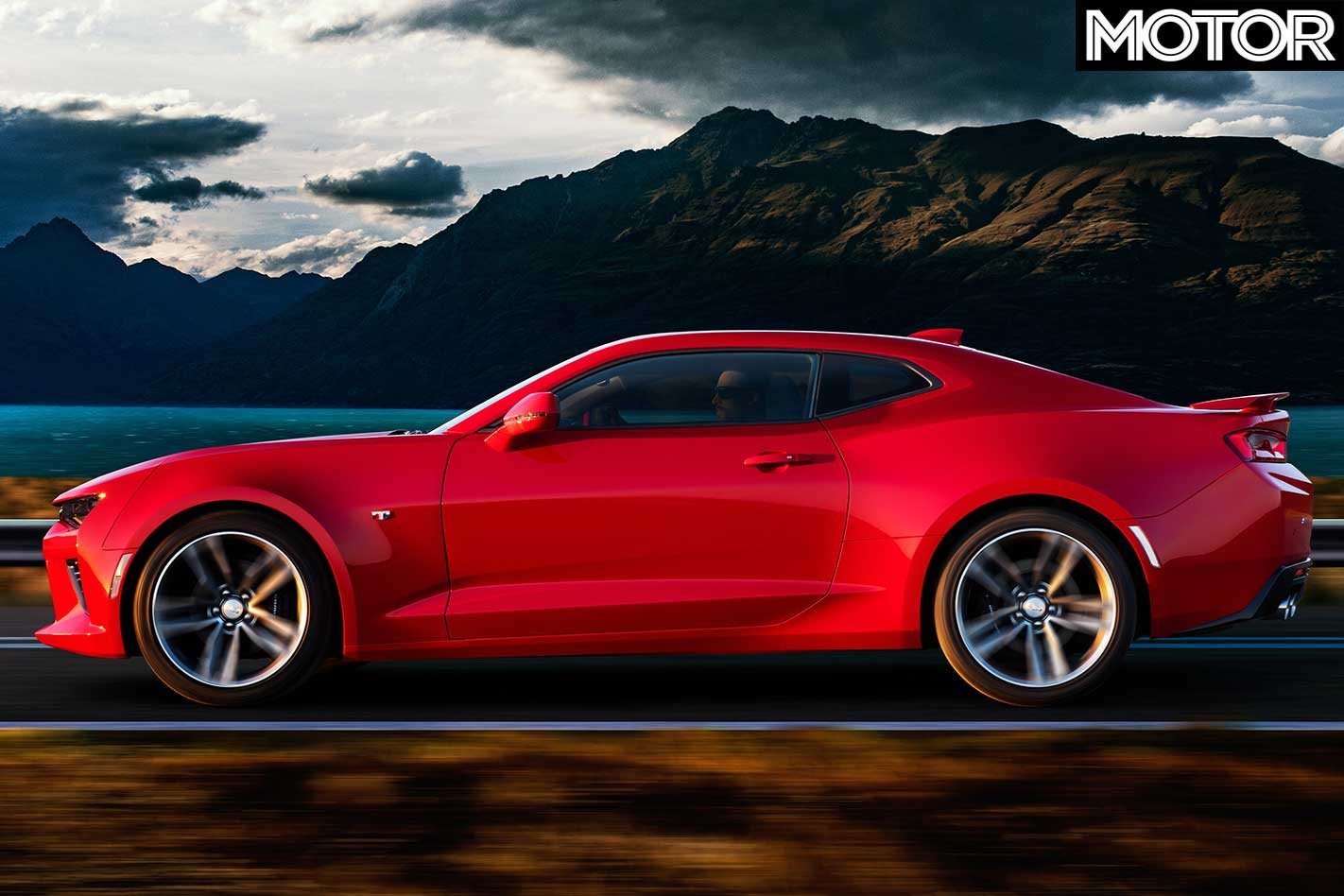 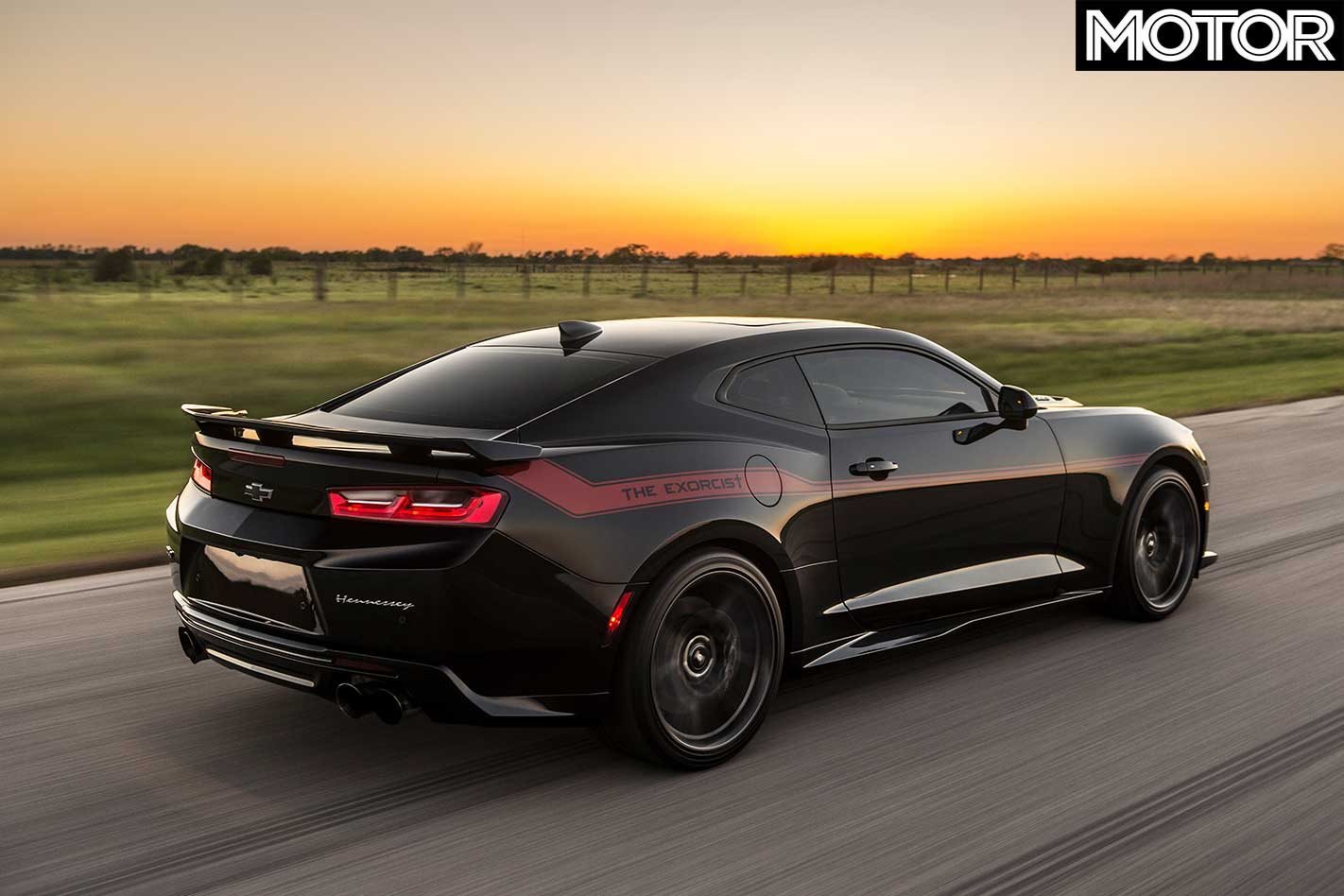 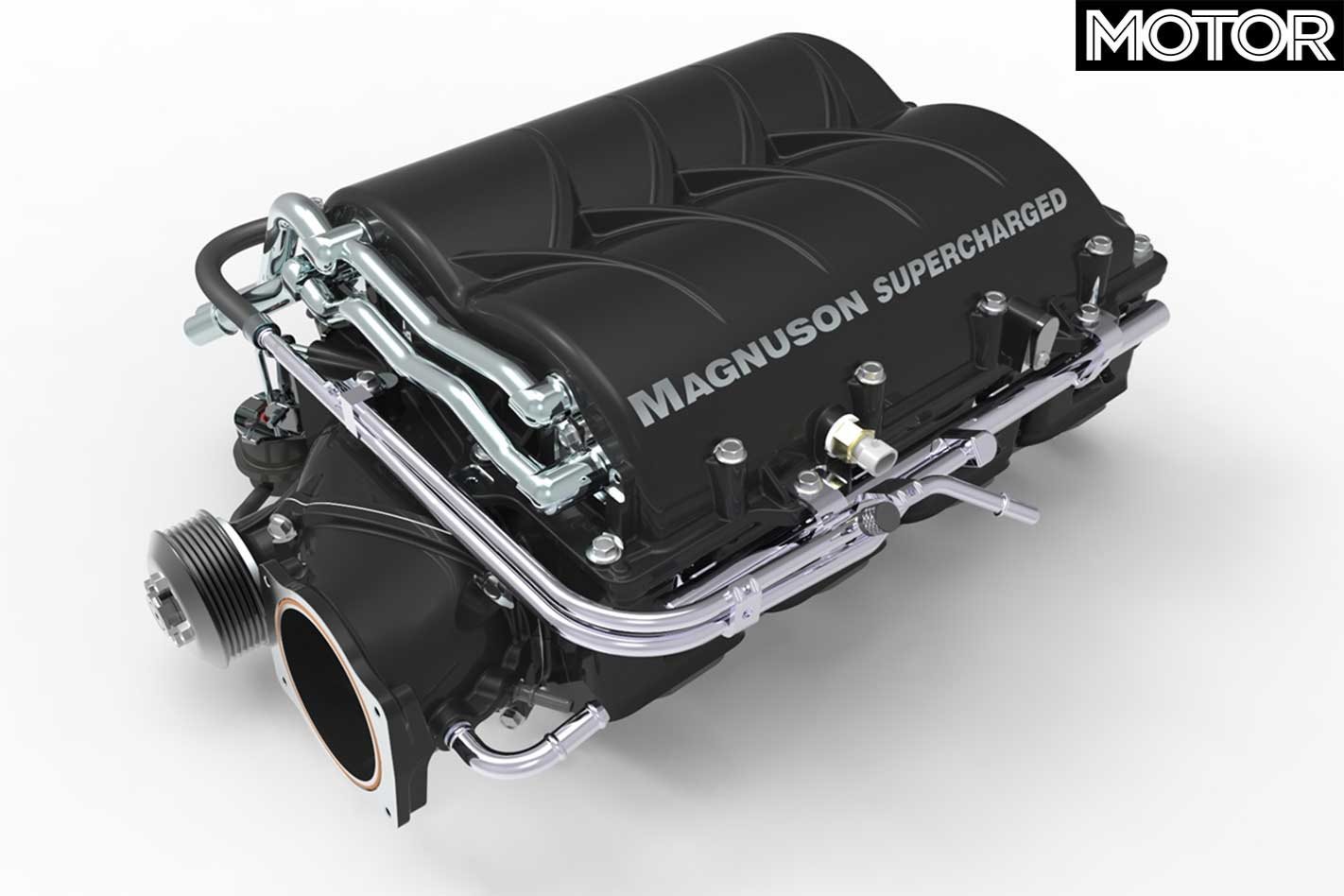 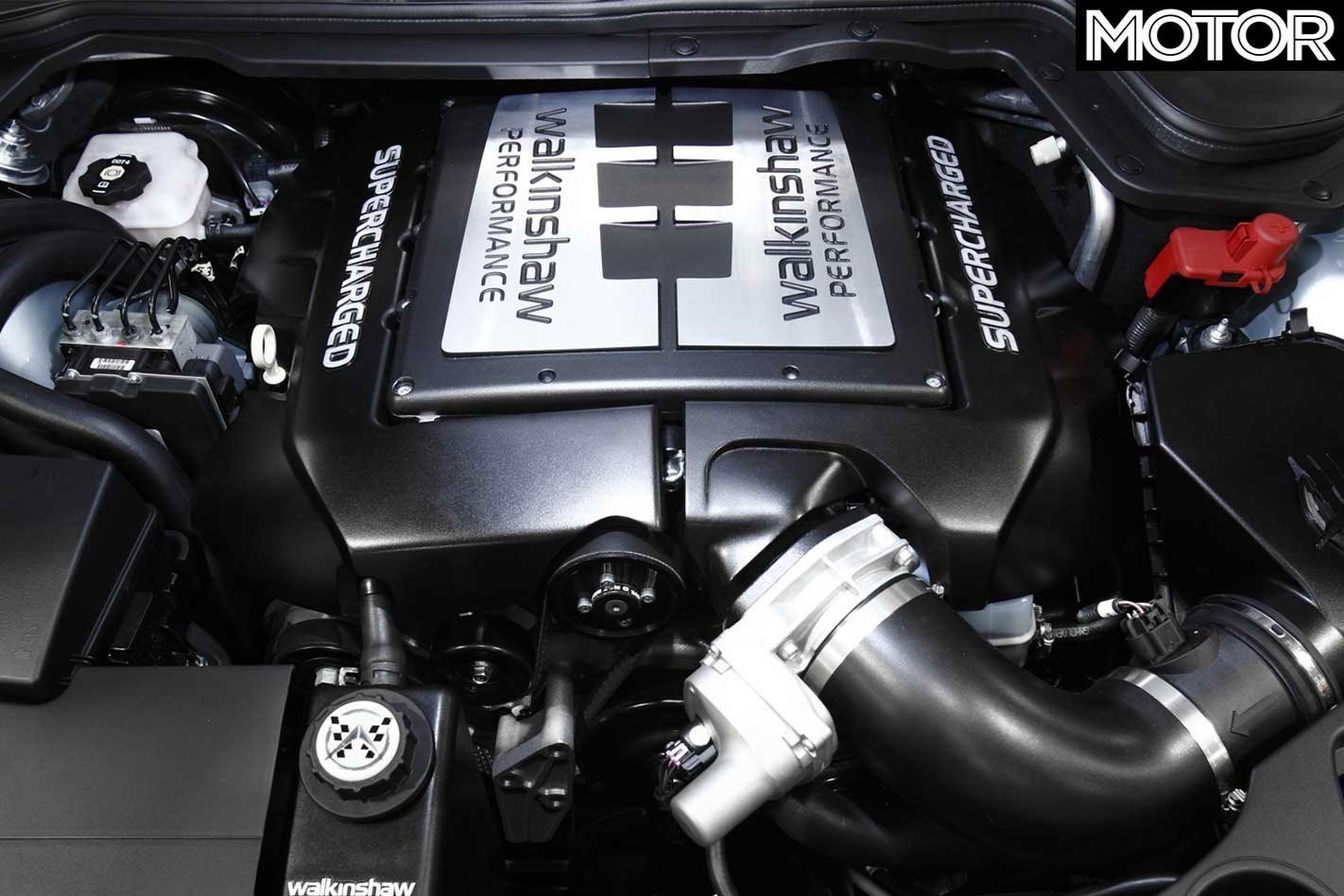 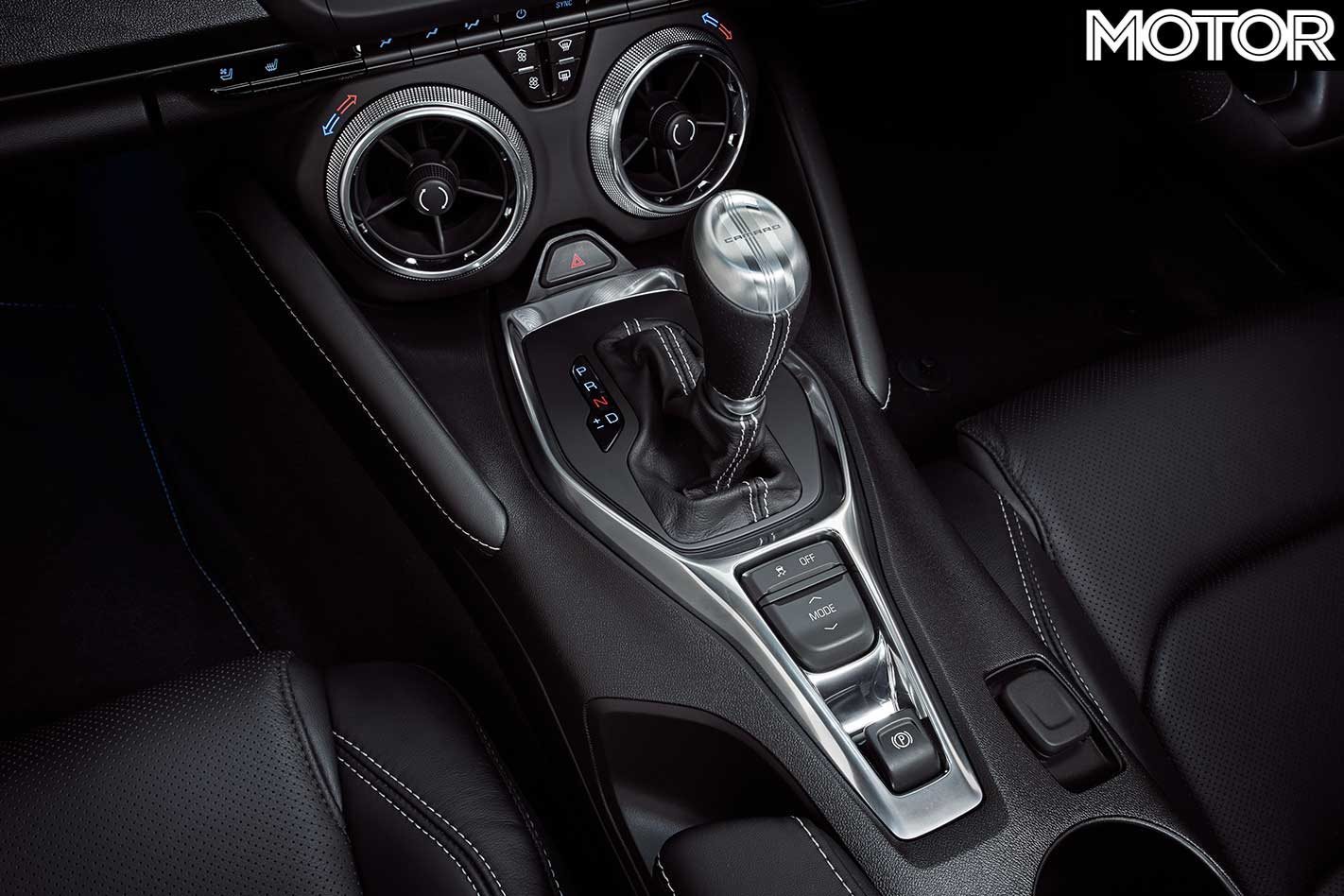 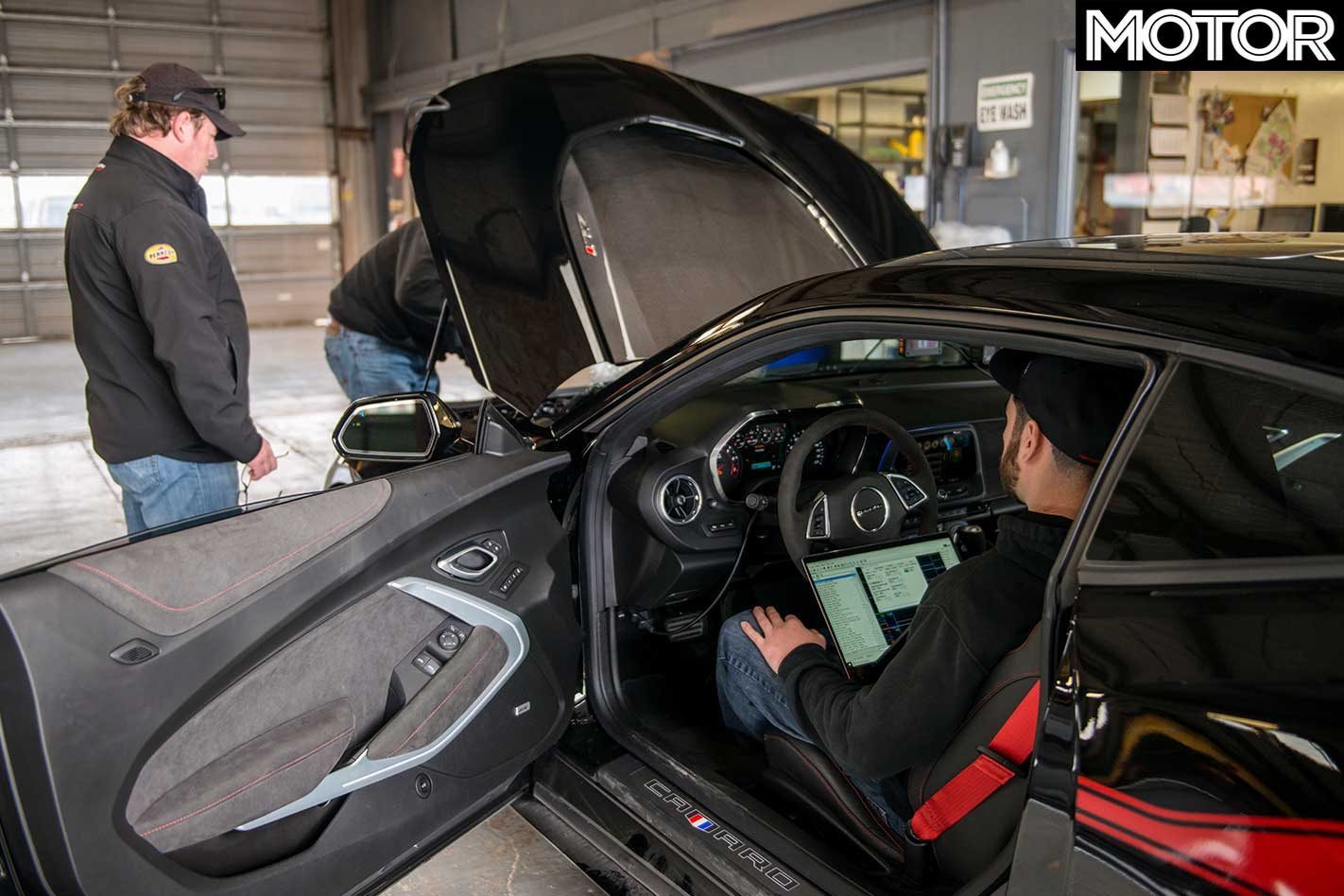 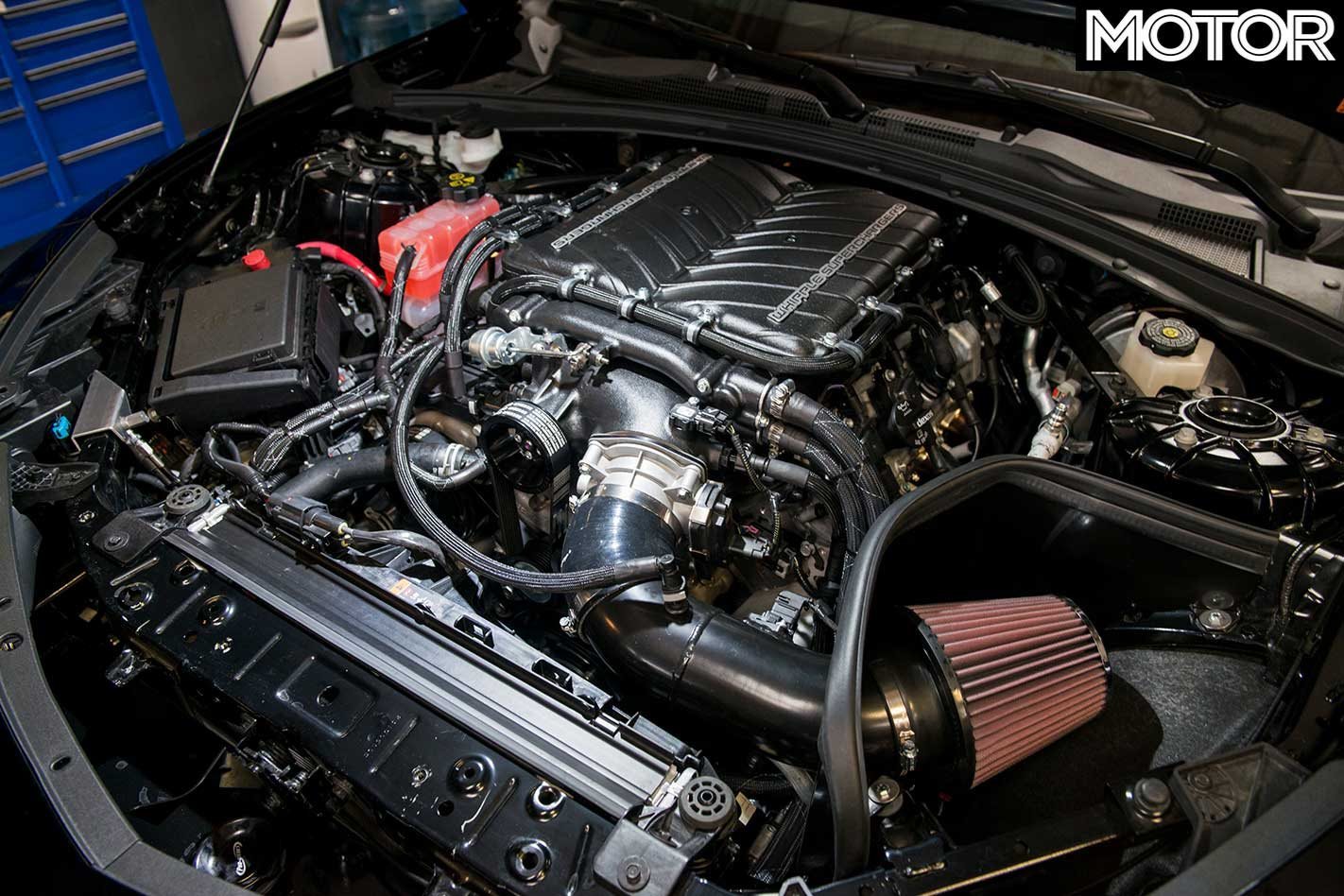 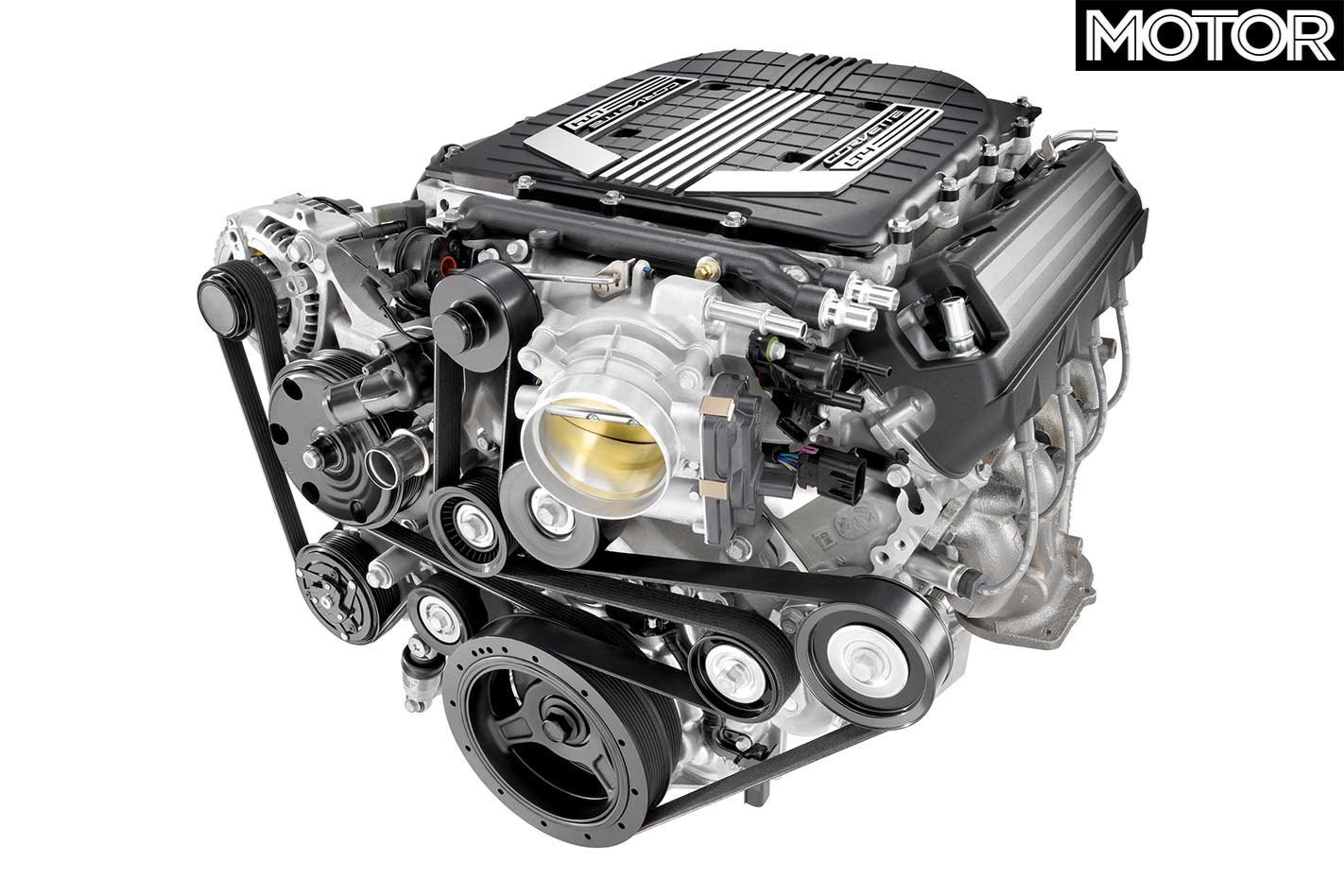 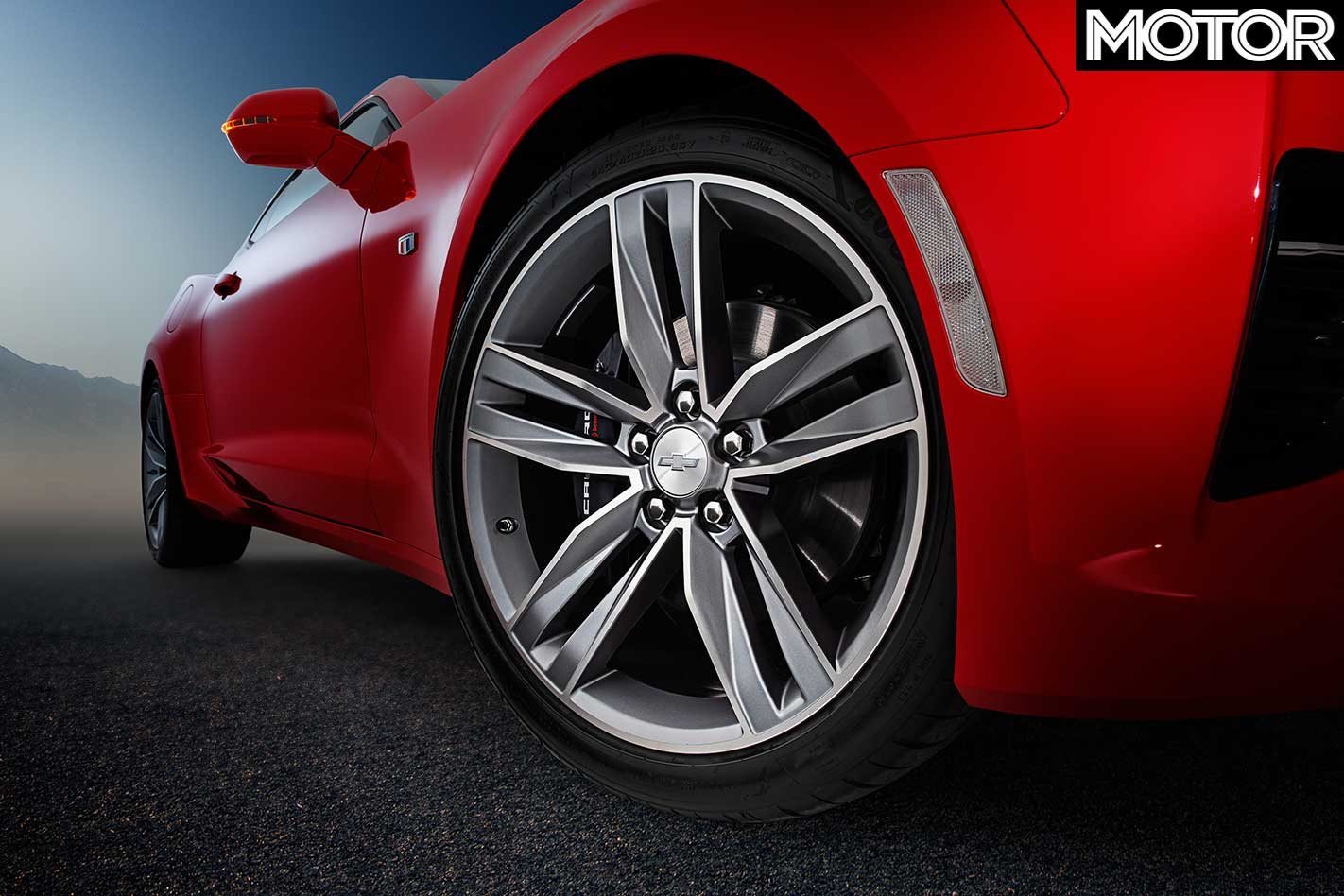 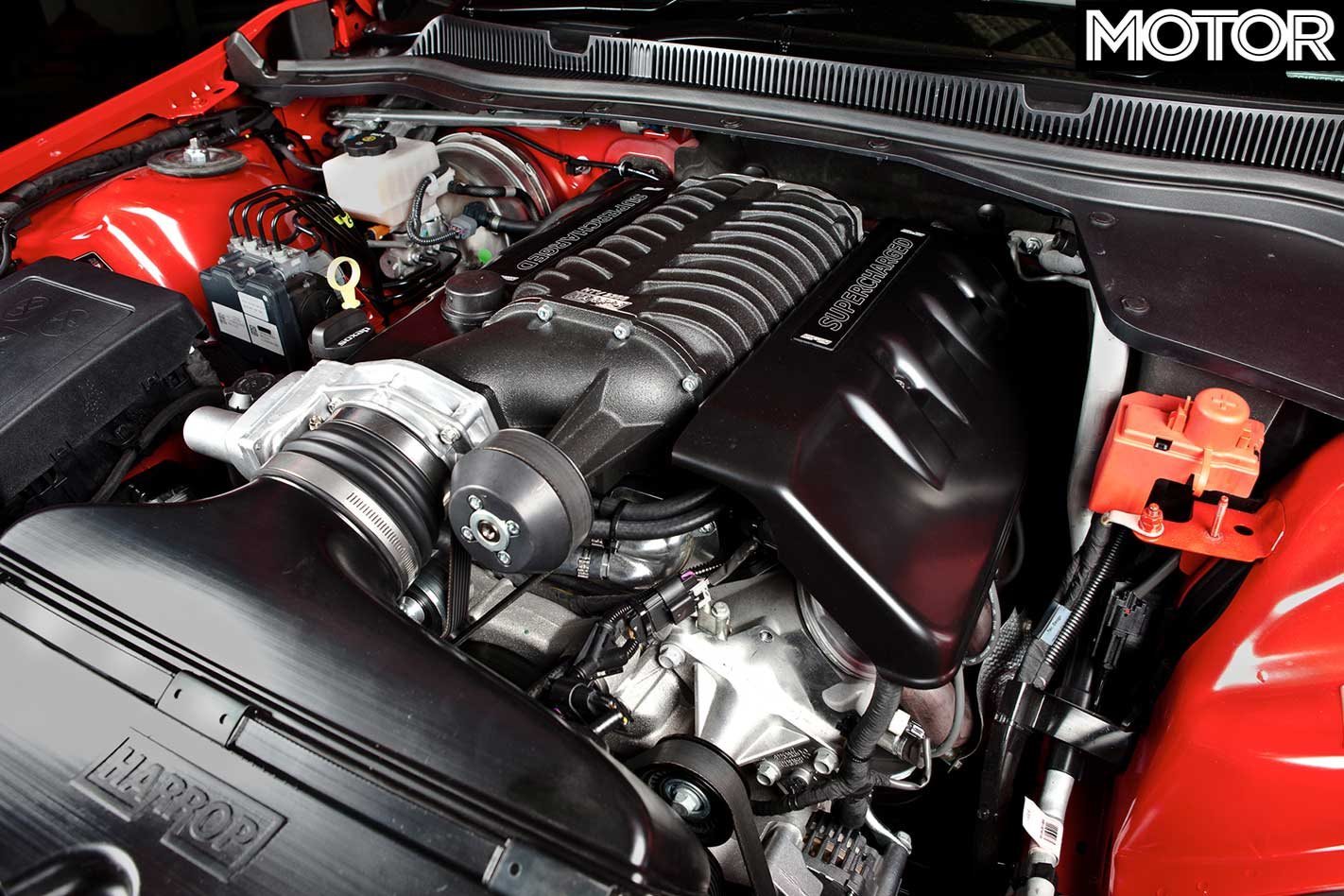 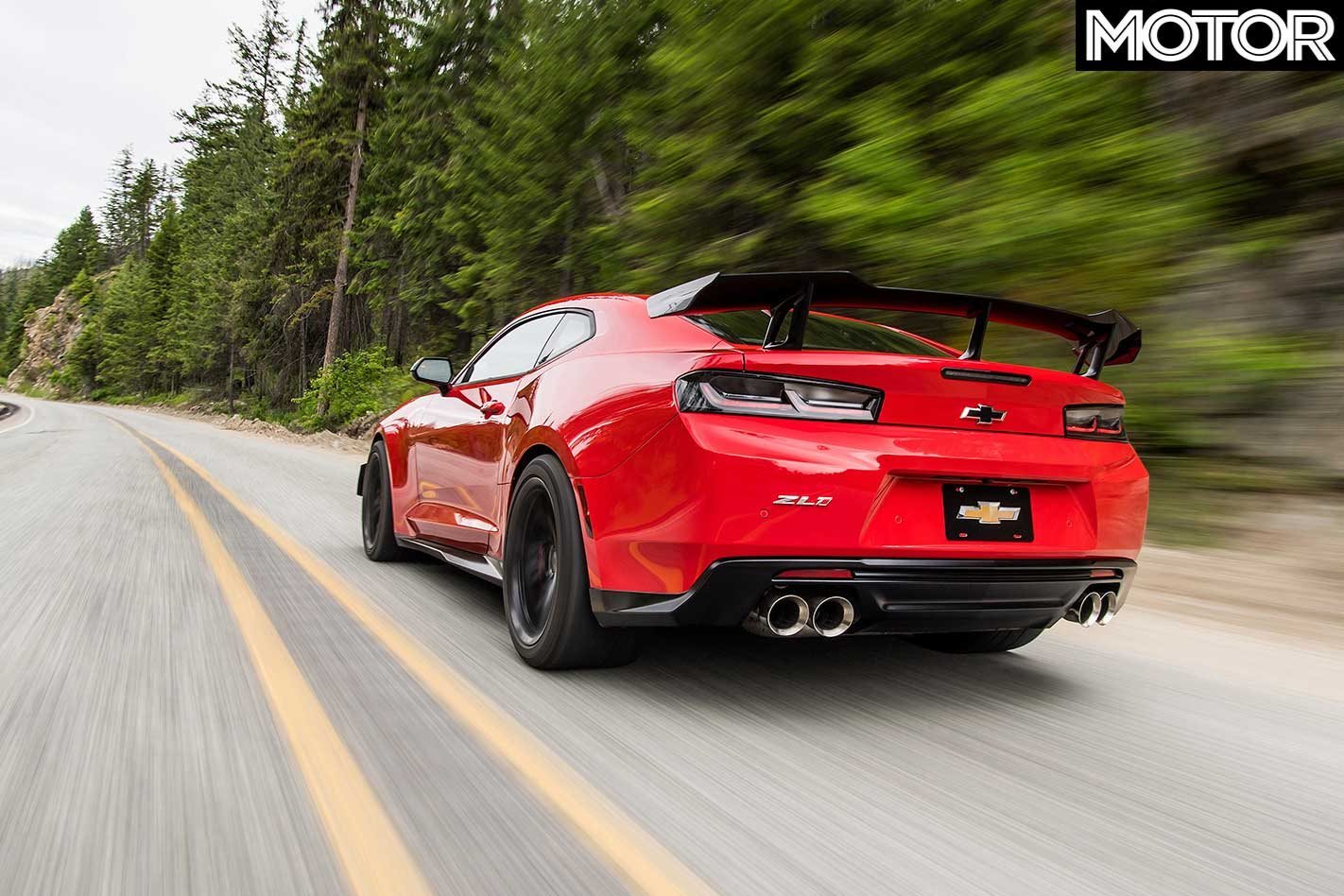