From the floor: Electrifying R8 hints at a greener supercar future ...

If, like me, you harbour a deep-seated fear that the future of motoring is econo-boxes running on tree sap and offering all the emotion of a golf cart, then you can take heart in concepts like the Audi E-Tron.

The electrified R8 looks even better in the metal than in pictures and while it's not slated for mass production, the general manager for development of Audi's go-fast arm, Quattro GmbH, hinted an electric sportscar could become part of Audi's stable in the next ten years.

The E-Tron is powered by four electric motors (one driving each wheel) and the spec sheet makes for tasty reading. With a total output of 230kW, Audi reckons the E-Tron will whir from 0-100km/h in 4.8 seconds on its way to top whack of 200km/h. With a 470kg lithium-ion battery pack sitting where the mid-mounted engines of the petrol-slurping R8 models do, kerb weight totals 1600kg, about 20kg lighter than the R8 V10 despite the heavy battery. The E-Tron's battery range is quoted at 240km.

What about the styling changes over the regular R8 models? Well the signature sideblades are gone (along with the side air intakes), and the new LED headlights are next-gen tech, according to Audi, and will be on the road in other models soon.

There are also new, almost retro, 19-inch wire-wheel alloys and the E-Tron is slightly shorter and lower than the road-going R8.

But the E-Tron will make it onto the road. The first prototype will roll out mid next-year and a limited run of cars will be built by 2012, says Audi boss Rupert Stadler.

If this is the future of sportscars, we can all breathe a sigh of relief. And, hey, you could always just play a CD of the R8 V10s beautiful noise... 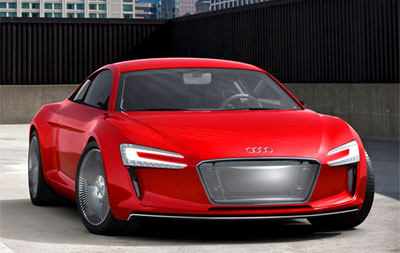 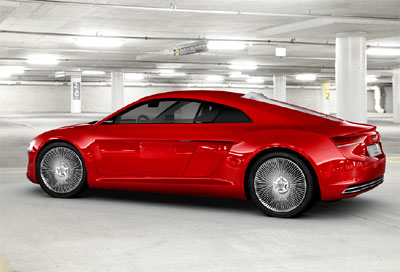