McLaren Automotive has revealed a design rendering of an upcoming open-cockpit speedster model at the 2019 Pebble Beach Concours.

The yet-to-be-named speedster is set to join the Woking carmaker’s flagship Ultimate Series ensemble next year, with only 399 examples slated to be made.

While McLaren has yet to release the speedster’s performance figures, the carmaker claims that the upcoming model will be the “lightest car ever produced by McLaren Automotive”, and will be paired with a variant of the 588kW twin-turbo V8 engine used in the track-focused Senna.

Considering that “McLaren Automotive” is often used to refer to the 2010 revival of McLaren Cars, the speedster’s goal of being lighter than the car maker’s current featherweight champion, the relatively lightweight 1188kg Senna GTR, sounds ambitious.

With the Ultimate Series comprising of the P1, Senna, and Speedtail, McLaren says the speedster model will have a clear “singular purpose as a thrilling road car dedicated to the love of driving”, which complements the Senna’s uncompromising road-legal track car design brief and the Speedtail’s intent for high-speed capabilities and road-focused driver connection. 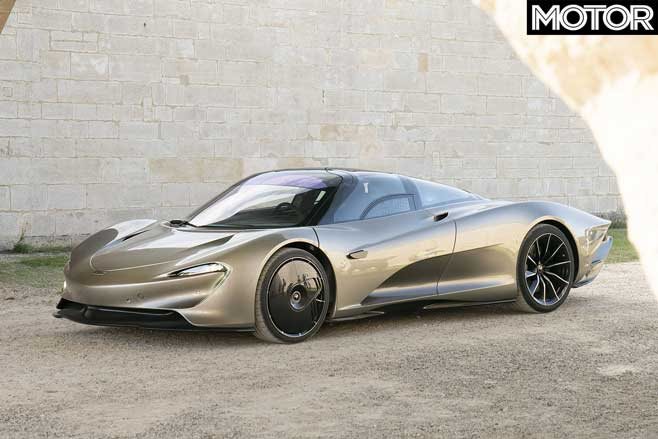 In addition to that, the speedster will be priced between the Senna and Speedtail, though considering that the two models are priced at £750,000 and £2.1 million respectively, it is a pricing gulf that is plenty big enough to comfortably fit another addition to the line-up.

According to McLaren, not all of the 399 speedster models have found paying customers, with the company taking expressions of interest from potential buyers at the Pebble Beach event.