IF THE incoming McLaren Speedtail is a window into the British brand’s future, then you best strap in. There’s a good chance the future is going to look a little bit weird. Because, and there really is no tactful way to say this, the mightiest McLaren to date looks somehow unfinished.

It’s as though some crucial elements (you know, pesky things like wing mirrors and alloy wheels at the front, or even some kind of downforce-inducing protuberance) have been forgotten in the rush to get it ready for its unveiling, and that, mere moments after the black silk was whipped back, someone at head office must have surely been receiving an Olympic-level bollocking for the cock-up. 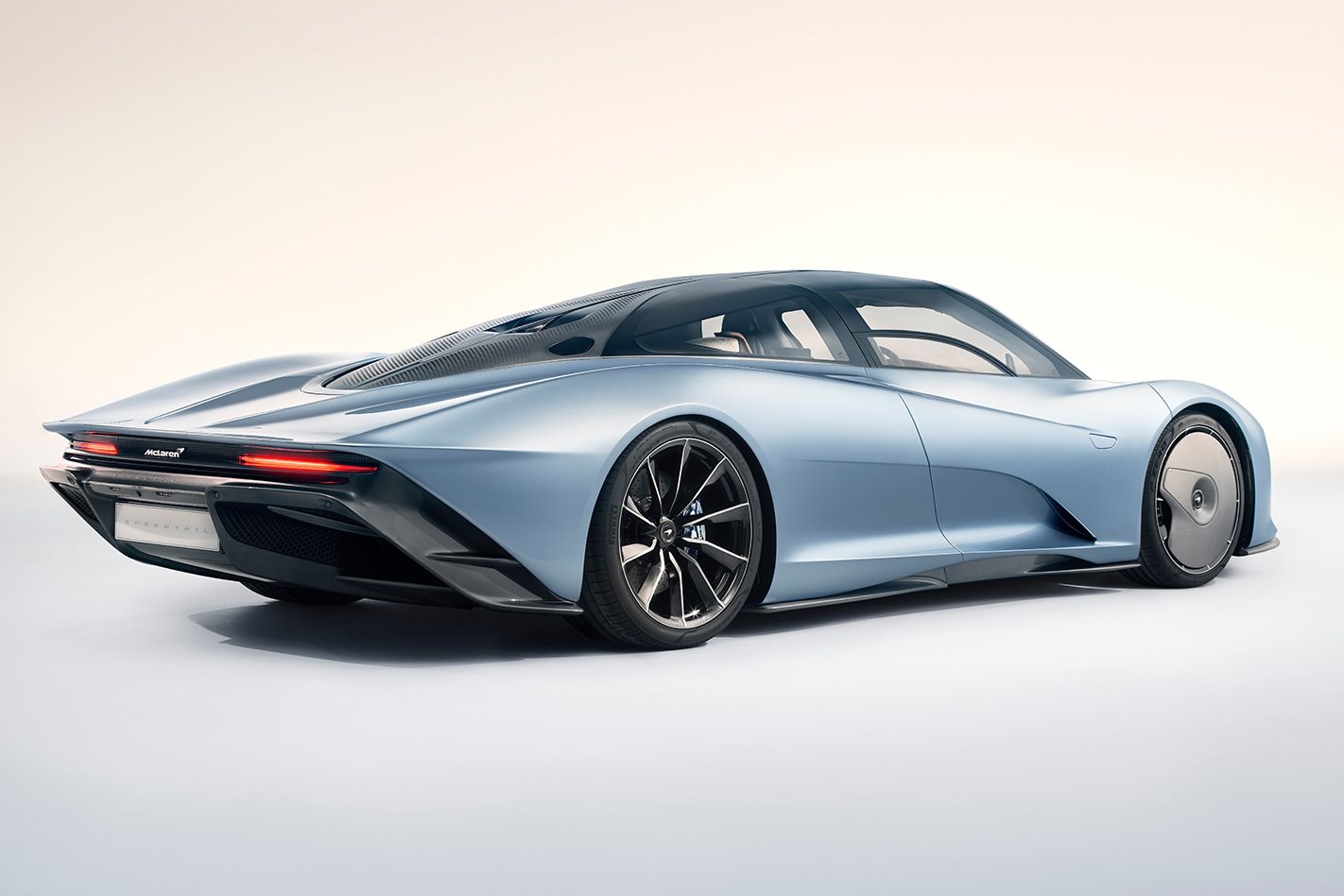 Not that it’s hurt sales, mind you. Just 106 will be built, and each will wear a £1.75 million (A$3.2m) price tag. (With taxes, expect the figure to be close to A$5m in Australia.) Cars won’t start arriving until the end of 2020, but all have already been officially spoken for.

But on closer inspection, the sleek and swooping Speedtail suddenly sharpens into focus. It was all part of the plan from the outset, no less. Or, in the words of chief designer Rob Melville: “We wanted the car to be the world’s first three-seat hyper GT. The fastest acceleration and the highest top speed of any McLaren ever, yes, but with regards to the visual look, we wanted it to be incredibly sleek and seamless, all elegance and fluidity.” 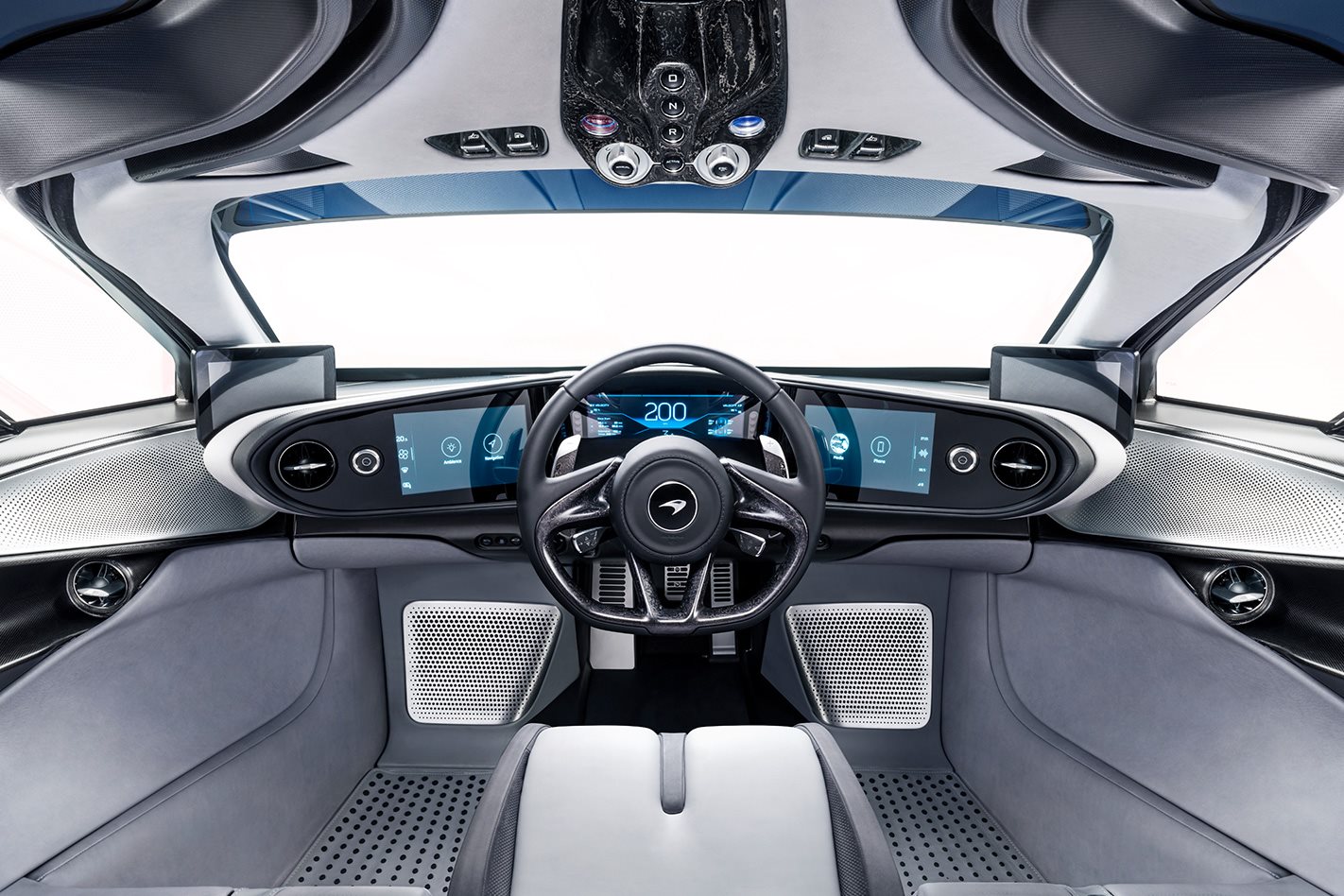 That fluid elegance comes from stripping away almost everything we’ve come to know about collecting speed. Gone are the giant wings so looming they look like felled lumber hovering above the car. Gone, too, are the sharp scoops and jutting splitters we’ve grown so accustomed to. And in their place live silky-smooth lines and curves so soft they could be modelled by Sophia Loren.

Read next: McLaren Speedtail leaked hours before its reveal

While cars like the McLaren Senna were designed with a singular focus on downforce and lap times, its new Ultimate Series sibling is just the opposite, sketched to slip through the air (and across continents) as the British brand’s first-ever hyper GT. 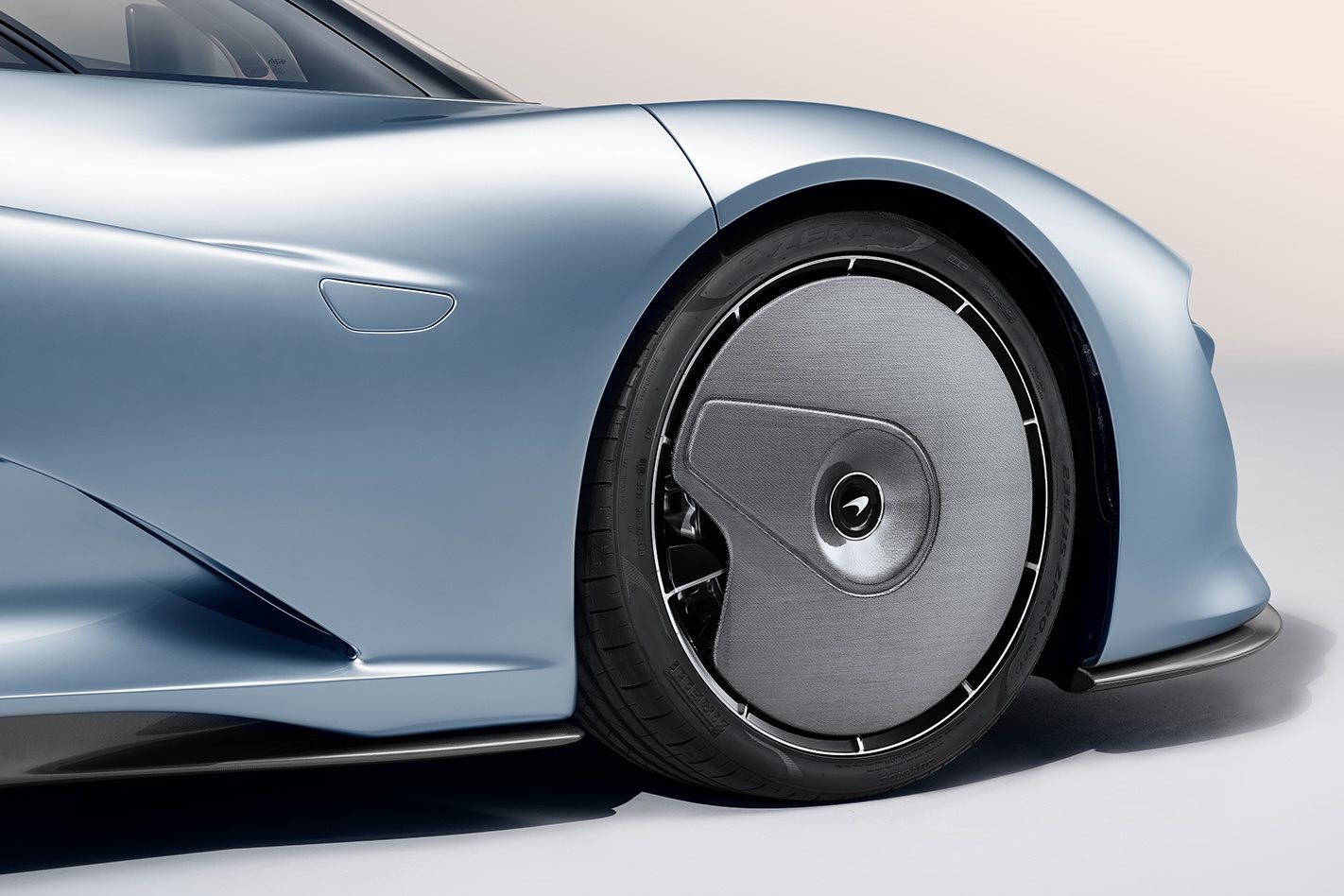 It’s why the wing mirrors have been replaced by high-definition cameras that pop out of the carbonfibre body work as required, beaming their image onto two screens in the cabin. And why the 20-inch alloy wheels at the front of the car have been smothered by carbonfibre covers that remain fixed in place as the hidden wheels behind them spin. Or why a traditional wing has been replaced by an active aero system made up of two tiny carbonfibre flaps that sit flush with the body work at the rear of the car, and that raise automatically to aid downforce or to act as an airbrake.

Everything you’d usually find glued to the interior has been stripped, leaving the F1-aping three-seat cabin almost impossibly clean. The sun-visors, for example, have been replaced by electrochromatic glass in the windscreen and roof that shifts to opaque at the touch of button. The traditional reading lights have been axed, too, replaced by a strip of LEDs embedded in the glass ceiling that are activated by touch.

McLaren Speedtail (BP23): What we know so far

And it’s all obviously worked, with the Speedtail now officially the fastest McLaren of all time, producing a staggering 772kW and a sprint to 300km/h of just 12.8 seconds. (Frustratingly, McLaren was not divulging full powertrain details at the unveiling, other than to confirm it runs the company’s 4.0-litre twin-turbo V8 mated to an electric hybrid powertrain). Top speed is 402km/h. It could likely go much faster, McLaren says, but not on tyres anyone could live with. Welcome, then, to the future of the brand. 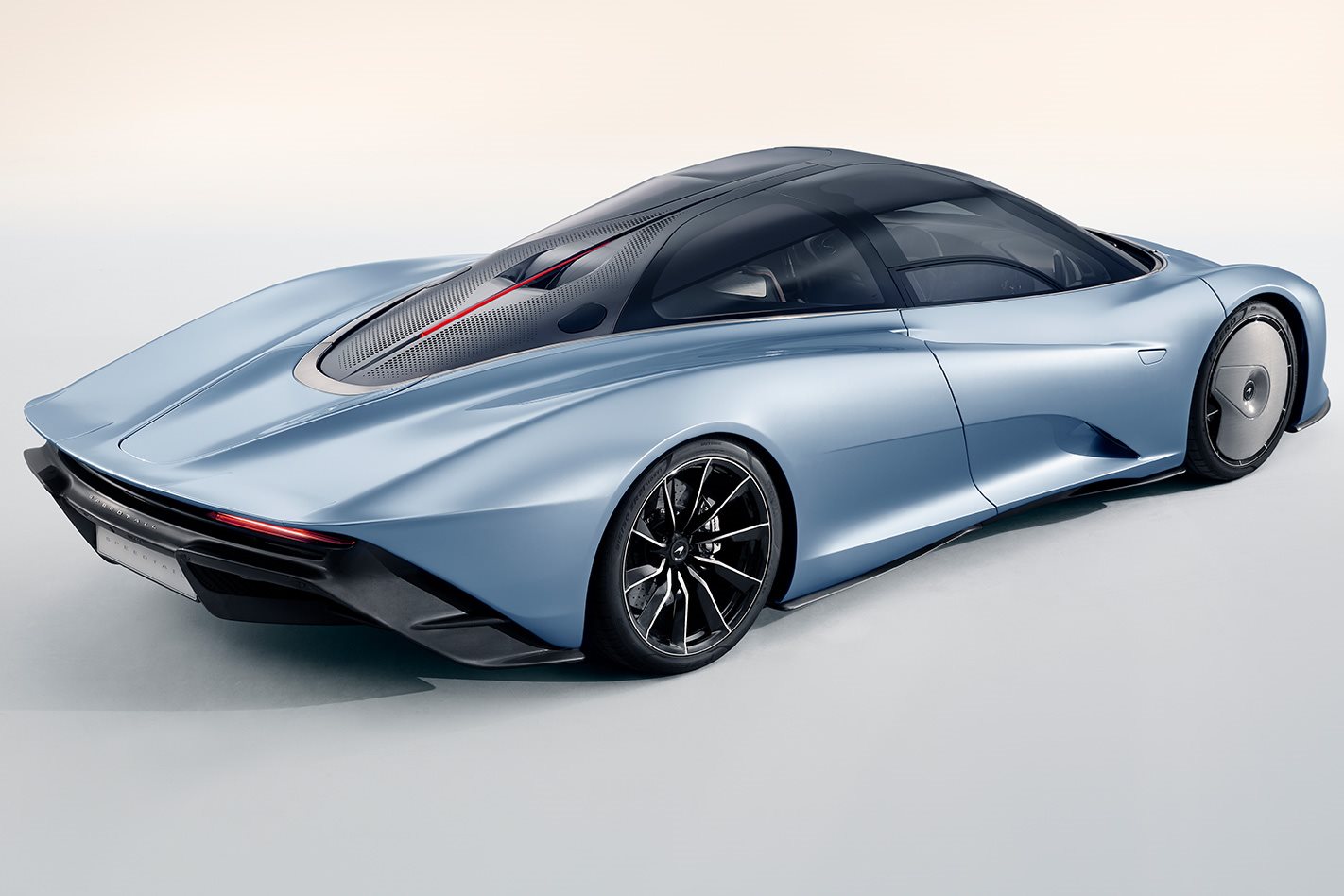 “I think what our Ultimate Series gives us is a technology showcase,” says McLaren vehicle line chief, Andy Palmer. “It gives us the ability to showcase innovation, and then allow more customers to share that over the next five or 10 years.”

Take those front wheel covers, which admittedly do take some getting used to in the flesh (especially given the 21-inch alloys at the rear are uncovered), but are critical in achieving slippery aero.

“They’re not to everyone’s taste, but it’s part of the design of this car, and it contributes to the attributes of what we’re trying to achieve,” Palmer says. “And as cars need to become more efficient, whether that’s range or from a fuel perspective, this adds an aero story that reduces CO2, extends range or unlocks extra levels of performance.” 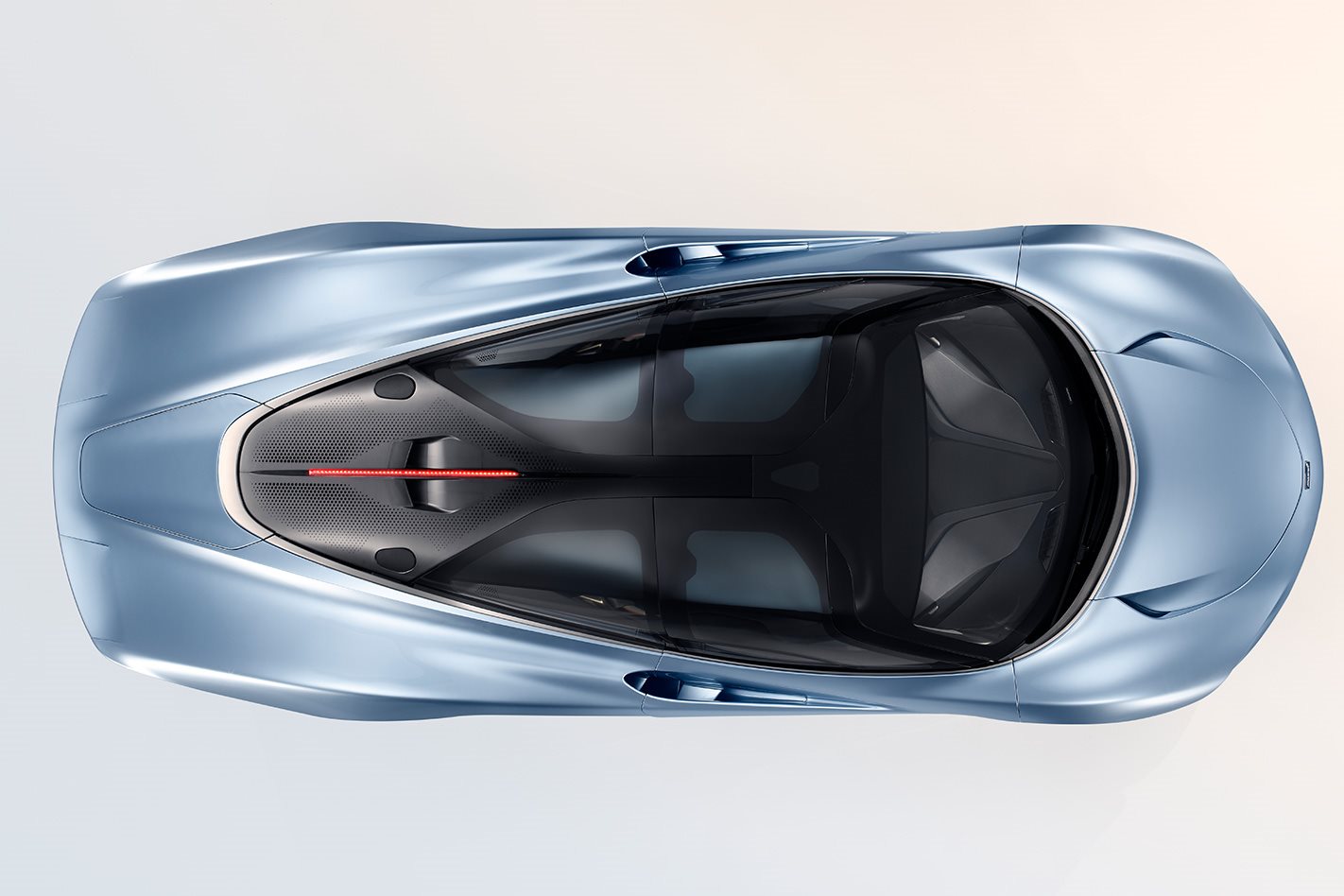 Asked whether this completes the brand’s Ultimate Series range, with the Senna built for the track, the Speedtail for the road, and the P1 (which will be replaced within the next five years) a bit of both, Palmer suddenly comes over a bit coy.

“Possibly,” he says. “I’d say this; the team is so passionate about what we do, and If I have an idea for a car, I will come to the board and ask them what they think. And some of those ideas will get a ‘what are you smoking, Andy?’ But others get a ‘well this is a great idea’.” 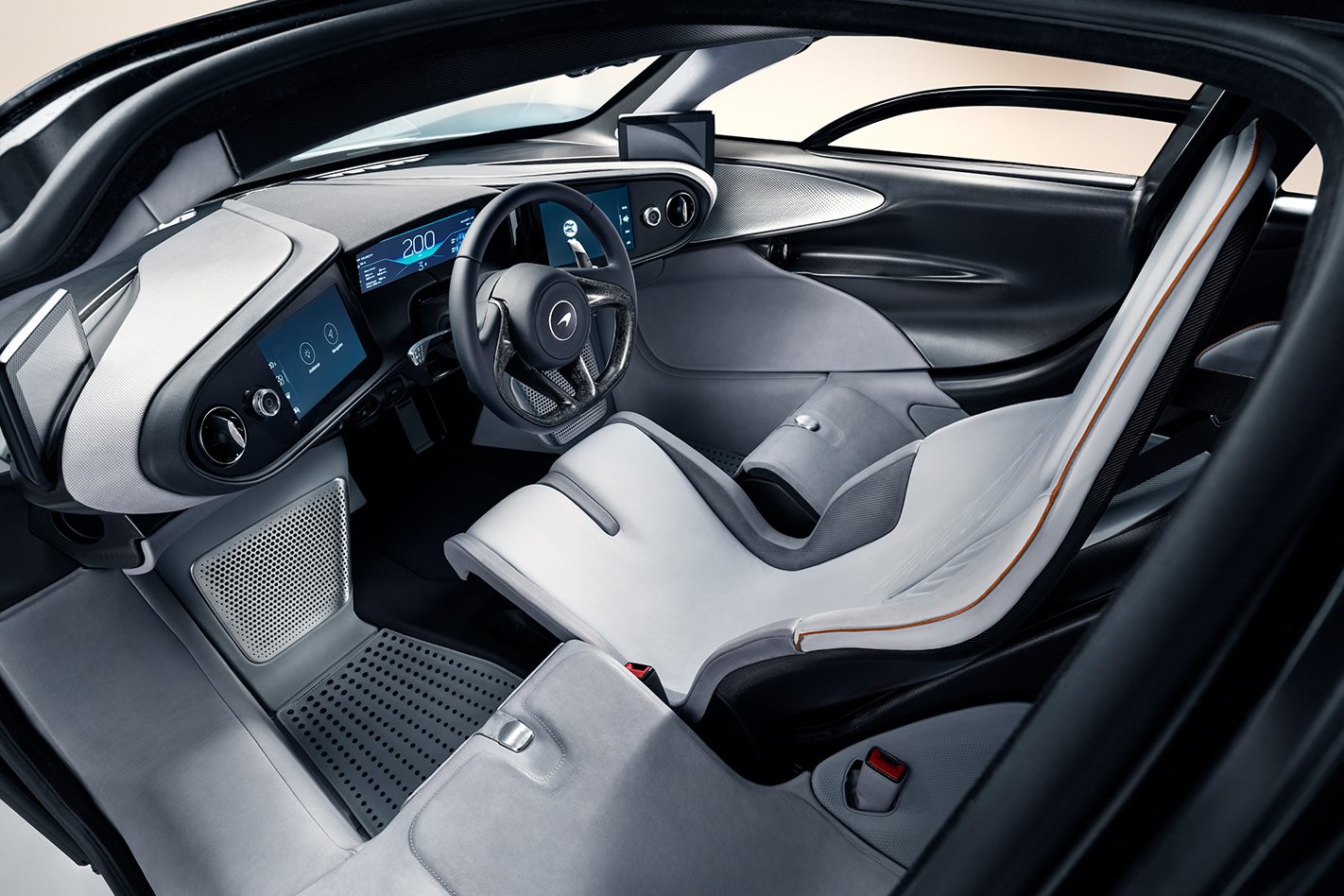 One thing is certain, though: electrification is the brand’s unshakeable destiny, with the Speedtail to debut the hybrid technology that should carry the brand through to the inevitability of full electrification.

“Fundamentally, we make sports cars, and what defines those cars are the performance attributes,” says McLaren CEO Mike Flewitt. “So for Speedtail, this hybrid version of our 4.0-litre V8 was the right way to go to get the performance characteristics we needed. It’s a different hybrid than we did in P1; it’s a direct-drive hybrid. There’s no EV capability, and it’s a fast recharge, so if you use the energy that’s stored, it recharges in about 90 seconds. 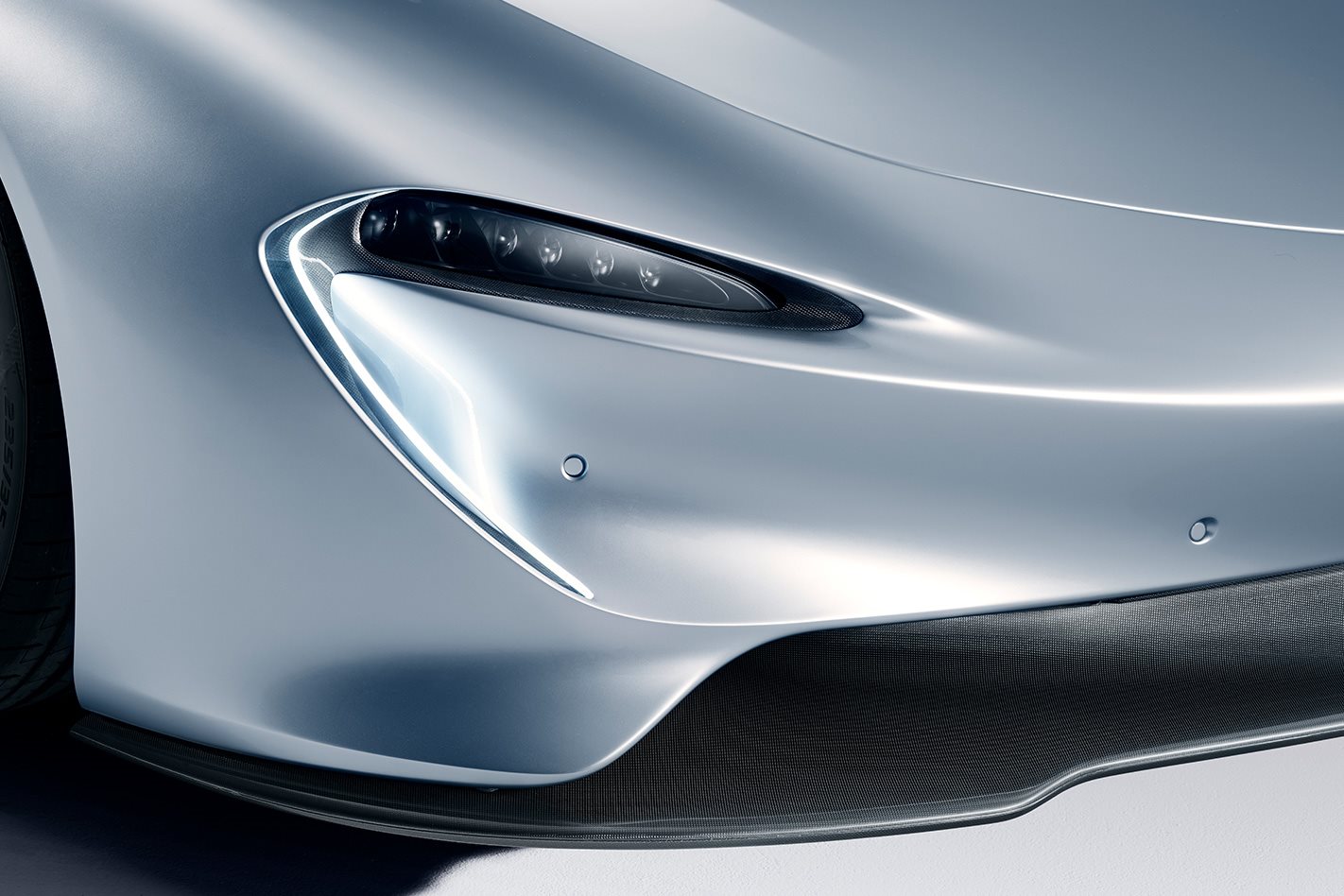 “So we produce incredible power for rapid acceleration or high speed, which is what this car is all about.

“As we go forward from there, we will keep developing drivetrains that give the performance we want. We will see more and more hybrids coming.”