Where have all the bush mechanics gone?

Having some mechanical skill is paramount to remote travel, but most people have no idea!

I HAVE JUST returned from a few weeks wandering the Simpson Desert and a couple of weeks up on Cape York, arguably the two most popular long-distance four-wheel drive destinations in Australia.

There were a lot of people on the tracks, all having a great experience and enjoying this wide brown land we call home. But what got me was the change I noticed, from seemingly just a few years ago to now, is people’s knowledge and skills about keeping their vehicle mobile.

It seems that, back in the good ol’ days, we were all pretty self-reliant and sorted stuff out and kept ourselves mobile whatever happened. Now, if it’s more complicated than a wheel change, then forget about it!

Having some mechanical skill is paramount to travelling in remote country. I’m not talking about the skill and equipment needed to repair a blown engine out in the scrub, but there are fairly basic things you can do that will help you stay mobile.

I’m also aware that modern vehicles have so much electronic crap on them that it is near impossible to fix them in the scrub, if something goes wrong with a computer or the like. Still, if you have one of these modern vehicles, you should have a scan tool to detect fault codes and at times even correct or nullify them. They cost just a couple of hundred bucks and are a necessity for modern-day outback travellers. However, the most common issues encountered when 4WDing in the scrub is that you break or bend things, and basic electrical issues seem to plague everyone. 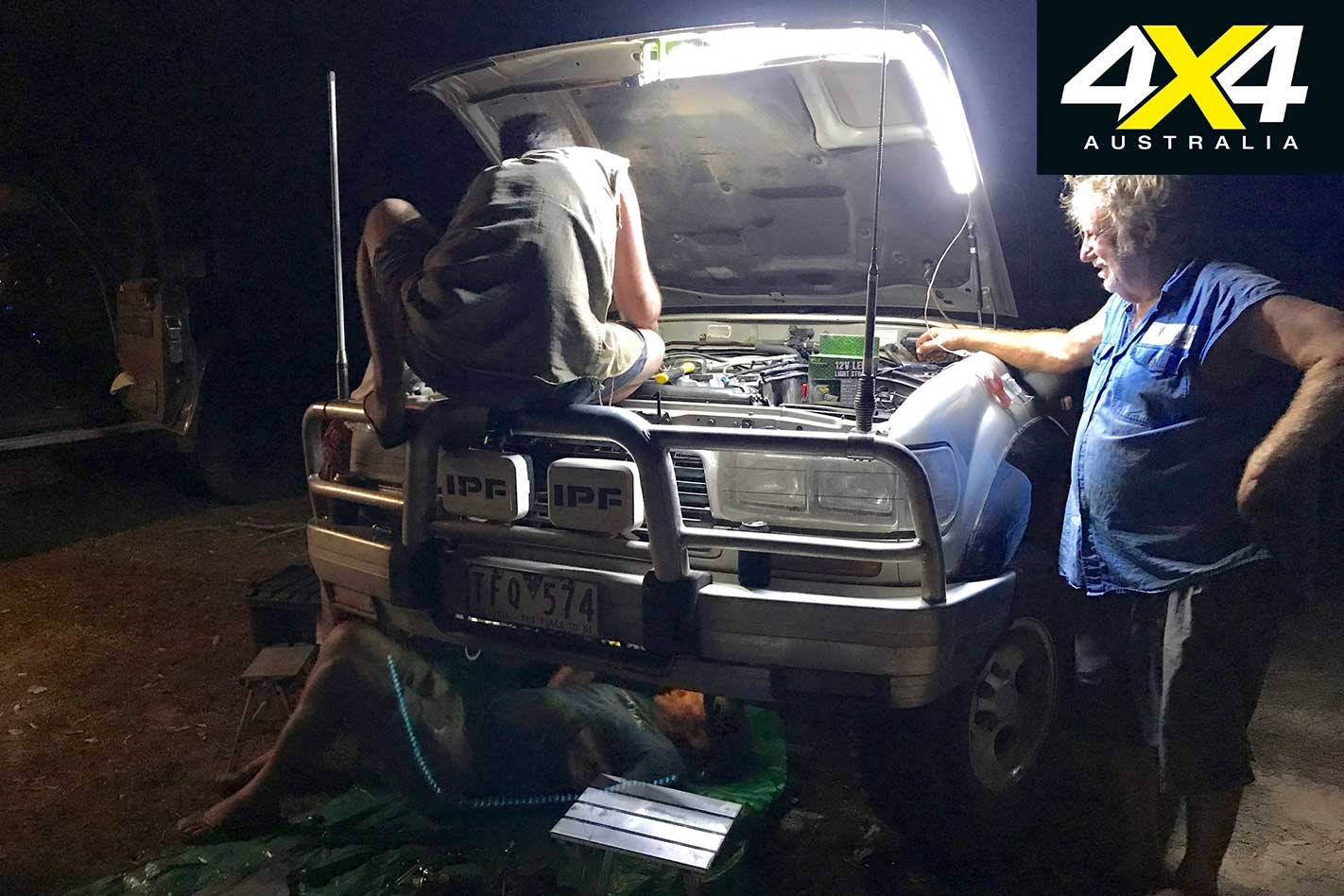 On one particular trip we busted a steering rod while travelling along the Gibb River Road. After the hairy ride which took us bush, I went and found an old star picket, cut that to length and used it to strengthen the broken steering rod, which we then welded. The repair was a beauty, eventually getting me back to Melbourne. Since then we’ve repaired everything from broken springs, collapsed suspensions, cracked chassis, busted roof racks, leaking fuel tanks, and a multitude of simple electrical issues.

On one of these most recent trips I was dismayed at the number of people who had just thrown in the towel and were waiting to get recovered; like the group who had a broken spring just before getting to the Plenty Highway after travelling up the Hay River Track. With a bit of thought and some basic gear that they should have been carrying, they could have kept mobile. But, no, they rang for help and waited for three days to get it.

Then there was the brand-new Navara out in the middle of the Simpson with a cracked chassis. Left. Abandoned. Waiting to be recovered. I was rather amazed that all of its accessories were still on it! 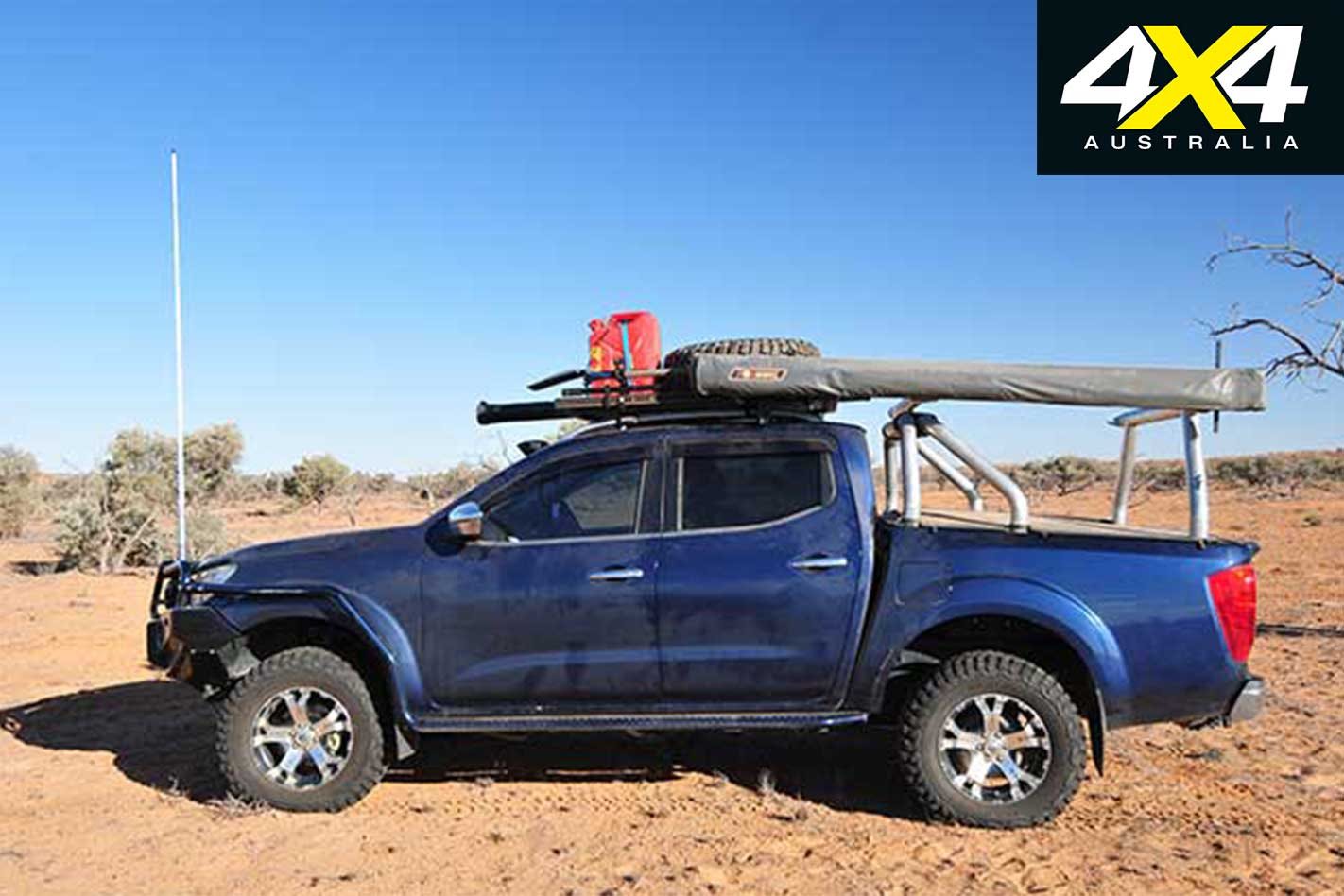 So before you head out on your next outback adventure, learn the basics about your vehicle, buy a repair manual (or download one from the web), and get a few basic tools and learn how to use them. And when you are in the scrub or on a long road trip, check oil and water and look for any leaks, every day ... or at least every other day. Check the entire vehicle over and use your eyes to look for loose nuts, clamps on hoses coming undone, a bent bracket, or the host of other things that if not detected early can lead to much bigger issues. Plus, a multimeter will help solve a heap of electrical issues, and they are not hard to use. Get one soon.

At Chili Beach I was more than glad to help out a couple of young bucks who wandered through the camping ground looking for someone with a grinder. I had one and they had the knowledge to give it a go. The result may have been a bit rough, but they got it sorted and the vehicle back on the road. I wish more people had the same initiative! 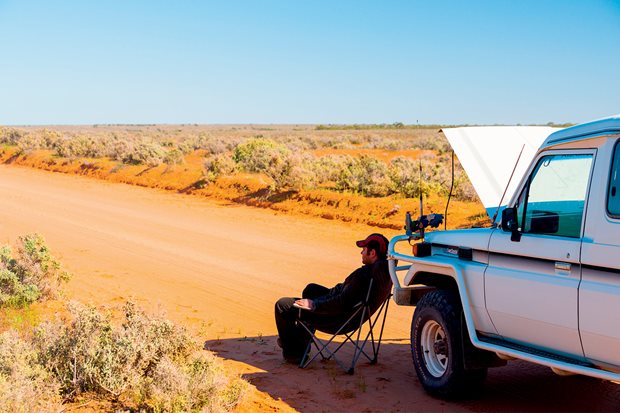 How to survive in the outback if your car breaks down

Stranded in the outback? Here are the simple steps that’ll help you survive the ordeal unscathed. 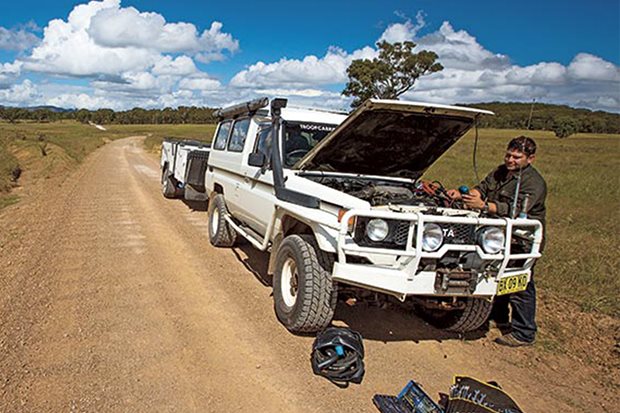 How to find and fix electrical faults in your 4X4

Having electrical dramas out on the tracks? Here’s your ‘get out of jail free’ card