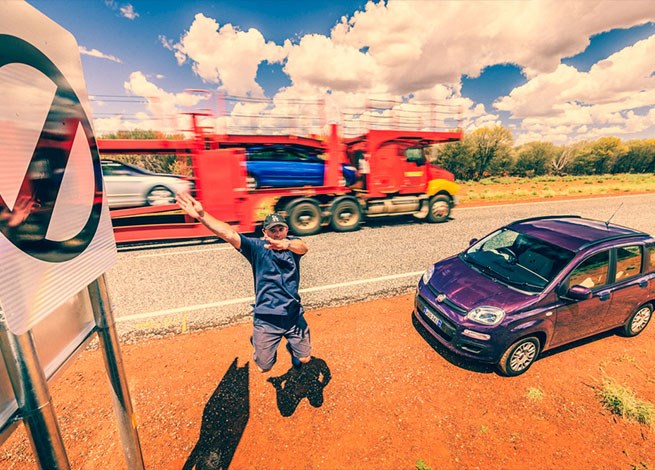 People who live in the NT are rednecks, right? WRONG! They’re actually smarter and leading the way when it comes to speed limits. Just ask Corby.

A man occasionally referred to as a journalist created “a storm” on social media last week – we imagine this is the kind that makes such a mess of tea cups – when he described Northern Territorians as “redneck, Top End hillbillies” and, worst of all, inferred that some of them may play the banjo.

The commentarian wasn’t having a go at them for their brave and brilliant trial of derestricted limits on a 220km stretch of road near Alice Springs, which began last Saturday. He was actually mocking them for being five times more likely to drink and drive than Victorians, and pointing out that one in 14 of them fails a roadside breath test (one in 100 would be a bad day in other states).

This might suggest that some of our northern residents are either a bit stupid, or bored with life.

We played a game last weekend while driving that stretch of surprisingly sane road out into the dusty, utterly deserted flatness. Every time we stopped on the side of the road – which was a lot, because I had a photographer with me – I would try and take more than two steps without being able to touch, or at least see, more than one VB can.

By my calculations, there have to be at least a billion of these cans lining the sides of the Stuart Highway. I’m not suggesting people are drinking AND driving, but if they’re not, they must have an awful lot of roadside picnics.

So it might come as a surprise to hear that what I’m angry about this week is that the Territorians are so much smarter than the rest of us.

Their transport minister, Peter Styles, who has introduced this appalling-to-the-zealots trial, speaks a lot of sense, but what really chimes with me – and what I’ve heard a lot of intelligent people suggesting for years – is that the speed at which you drive should be, within reason, a matter of personal responsibility.

“The people in the bush asked us to look at bringing back derestricted sections of road; it’s not about having an autobahn, it’s about the issue of fatigue, it’s about getting to our destination before dusk,” the minister told Wheels.

“We’ve got long stretches of flat road with very low traffic volumes and this is about letting people who want to move a bit faster do so. It’s about personal responsibility.”

Styles is a former policeman who worked through the period when many of the NT’s roads were unlimited. He says the cops can tell the difference between bushies in a hurry and idiots wanting to break the sound barrier. He doesn’t have a problem with speeds of “160 or 170km/h” if conditions are appropriate and your car is in good order.

“We all speed up here, we all sit on 180 – that’s my minimum basically,” says Geoff Dick, the publican of the Aileron Hotel and a man the transport minister refers to as a good bloke for us to speak to.

Dick, who also runs the only petrol station for miles, tells me this while standing in front of a fridge stacked to the roof with VB cans for sale.

He’s a plain, profane talker, but he speaks a lot of sense, and every local we speak to agrees with him.

People who haven’t been to the NT and driven their section of the Stuart Highway have no idea what they’re talking about when they think the Speed Kills bogeyman is going to kill everyone.

And, having tried it for myself – for a story you’ll read in the next issue of Wheels – I have to agree with the locals. It really is nothing at all like driving on the autobahns in Germany. It’s really a reminder of the maxim that speed is relative. The horizon out there is so far off, so flat and immovable, and other cars are so rarely seen that you barely feel like you’re making ground at 160km/h or faster.

And as minister Styles points out: “A lot of people will tell you, at 110km/h they go to sleep, but at 140 they’re awake – it’s the stimulation of movement that keeps the brain alert.”

So if the Territory – a place where it is illegal to produce a newspaper front page without the word Croc on it – can work this out, what’s wrong with the rest of us?

I’m not saying the Hume should be unlimited, but surely the idea that some of us might be capable of driving bits of it at 130 (while many still wouldn’t want to) isn’t so outrageous.

Interestingly, Styles said he’d heard from senior figures in other states who were watching the trial closely, and that he knew the police in Western Australia were also very keen on raising speed limits in country areas.

Perhaps we’re becoming like the US, where some states make entirely sensible laws, while others demand that every citizen must carry a concealed firearm. Hopefully not, though, because that would mean we’re full of rednecks and hillbillies.