WHAT IS IT?
The long-awaited successor to Mercedes-Benz’s GLK, which was launched somewhat misguidedly in 2008 in left-hand drive only, preventing it from competing against Audi’s hugely popular Q5 and BMW’s well-established X3 in right-hook markets including the UK, Japan and Australia. But what a turn-around!

WHY WE’RE TESTING IT
The enormous success of the W205 C-Class in Australia – averaging 810 sales a month so far in 2015, making it the second-biggest selling medium-size car behind the Toyota Camry – means its SUV spin-off is hugely important for Mercedes-Benz. Given that the Q5 is Audi’s biggest-selling model in Australia, there’s a strong chance the GLC is going to be the sales darling of 2016 for the three-pointed star brand.

THE WHEELS VERDICT
PLUS: Striking styling; outstanding interior; class-leading passenger and luggage space; surprising off-road ability
MINUS: 250d not quite as sweet as the lazier 220d; handling and steering not as crisp as a C-Class; ride quality may be an issue on the 19- and 20-inch wheels standard in Oz

A potential game-changer in a class where no rival truly stands out, certainly in terms of its premium look and feel, and the sophistication of the its chassis. Only Porsche’s pricey Macan can match the GLC’s on-road and off-road ability, though the Porsche is more sporty to drive. That said, this is just the beginning for the dapper GLC, with twin-turbo V6 and V8 AMG variants on the way, as well as entry-level rear-drive models. BMW must be quaking in its boots right about now. 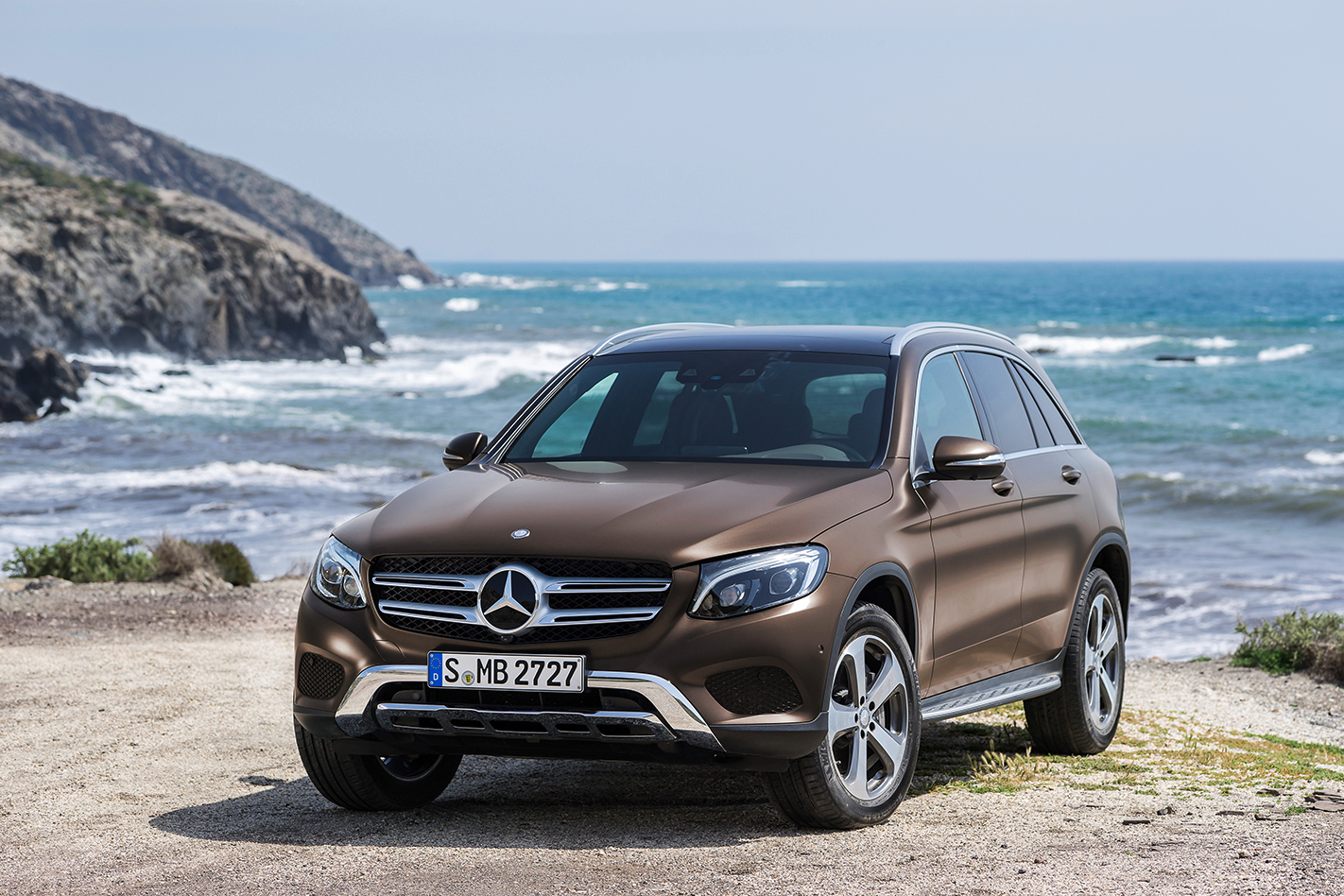 THE WHEELS REVIEW
WHEN you pay a premium price for something, you expect a premium product. Cut-above engineering combined with a higher-grade interior, cloaked in a stylistic form able to withstand the inevitable ‘driveway’ test. And if you can add a degree of ‘X-factor’ to the mix, then you might just have yourself one fine piece of machinery.

In the case of the Mercedes-Benz GLC, that warmth of appreciation begins the moment you see it. Almost coupe-like in the shape of its glasshouse, with its wheels pushed out to each corner, the GLC is an exceedingly handsome SUV.

It’s the stance that does it. Riding on easily the longest wheelbase in its class – 2873mm – the GLC only just manages to out-size its rivals in length, yet it sits lower than almost all of them, while boasting a class-best drag coefficient of 0.31.

It’s the GLC’s sheetmetal, however, that’s the cherry on the cake. AMG GT aside, this is Mercedes-Benz’s best-looking car, and it’s all in those sculptural shoulders, tapering to a delicately proportioned rear that still manages to house the equal-largest boot in its class (550-1600 litres). 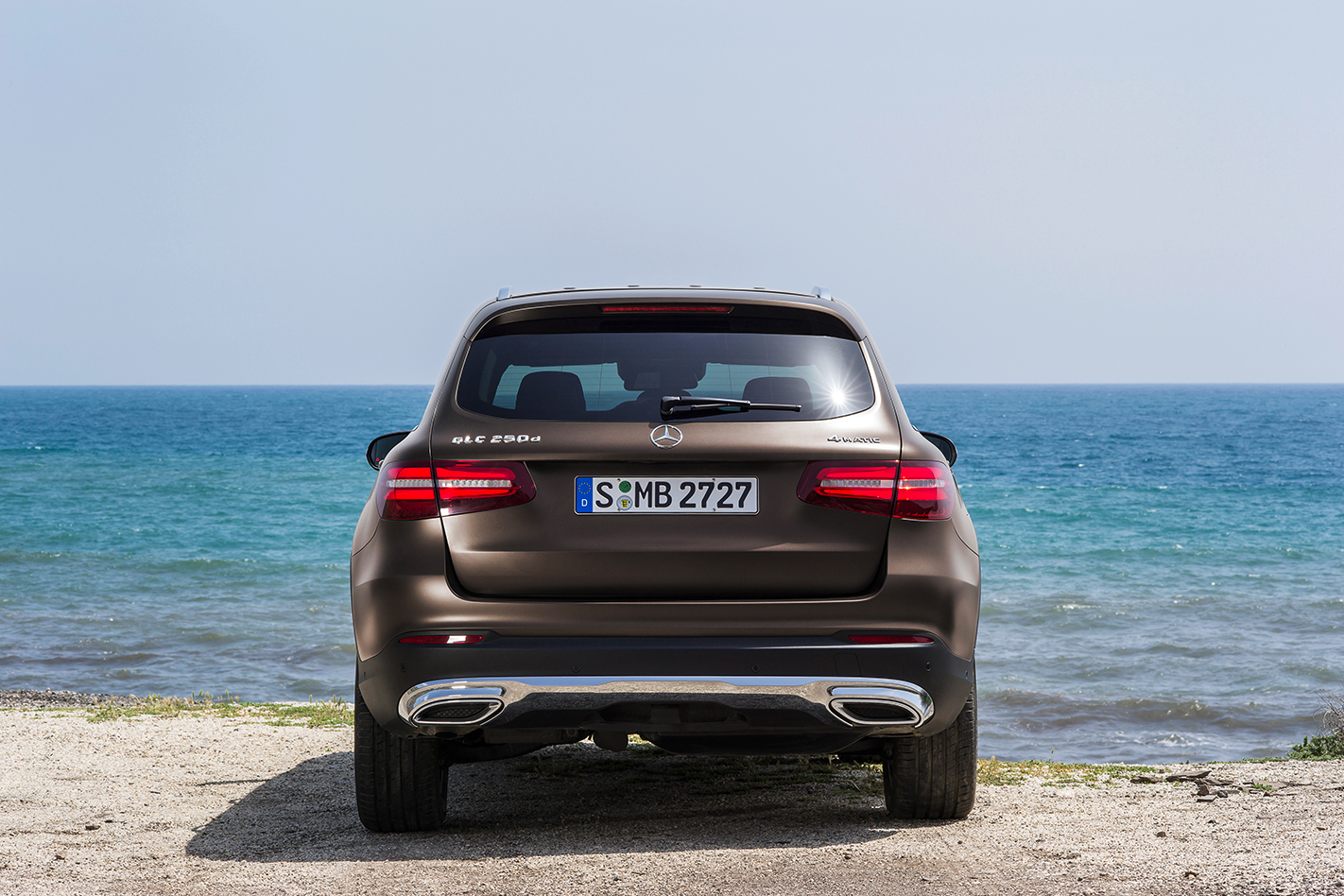 When I asked chief designer Michael Frei what his favourite part of the GLC was, he pointed directly to those rear haunches, and somehow I knew he was going to say that.

So, the GLC’s undoubtedly a looker, especially on the 20-inch wheels worn by all the launch cars.

There’s plenty of aluminium in its structure, dropping overall weight by 80kg compared to its smaller GLK predecessor. The front guards, bonnet and roof are all aluminium, and so are the rear cross-members and longitudinal members, while pretty much the entire front and rear suspension arrangements are forged aluminium.

Uniquely, even the base GLC features adaptive dampers for its steel coil springs, but (as with the C-Class) you can go one step further by selecting ‘Air Body Control’ with its multi-chamber air springs and electronically controlled, continuously adjustable dampers. And it’s this set-up, matched to massive 255/45R20 Pirelli Scorpion Verde tyres that adorned all the GLCs we drove. 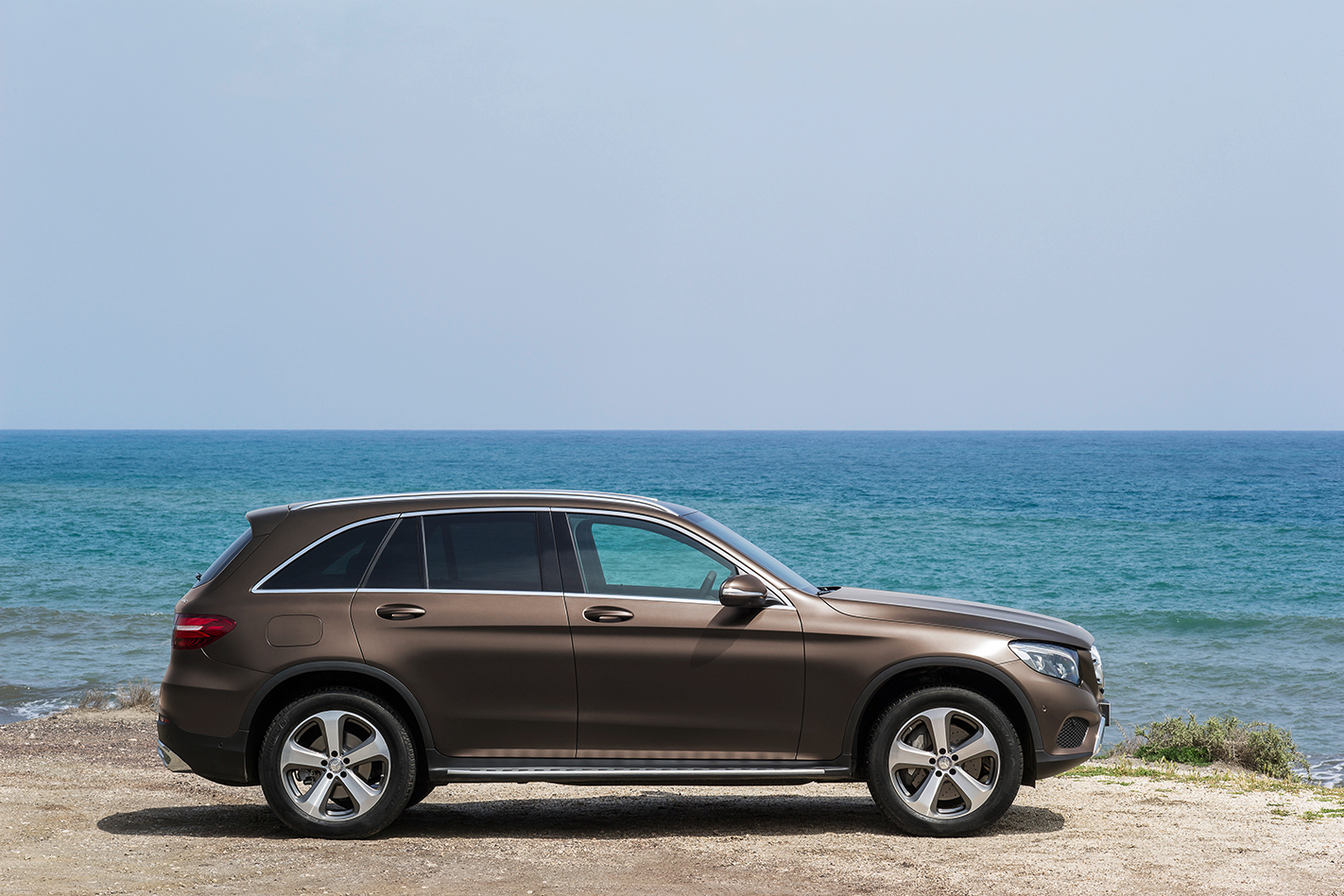 Only three engine variants will be available at launch – 220d, 250d and 250 petrol – each tied to Mercedes’ new 9G-tronic nine-speed automatic and transferring power through a permanent all-wheel-drive system split 45/55 front/rear (or, weirdly, 31/69 on right-hand-drive 250ds).

Lesser-powered rear-drive variants will come later, but the bulk of GLC volume will be these three, kicking off at a super-competitive $64,500 in Australia.

First thing you notice about the GLC 220d is how refined the 125kW/400Nm 2.1-litre twin-turbo diesel is. You wouldn’t call it velvety, but there’s been a definite improvement in NVH over the same engine in the C-Class and it seems better suited the GLC’s station in life.

In our test car, the high-boost diesel and nine-speed auto weren’t quite on the same page. The odd thump from the transmission when crawling in traffic, combined with a similar result when asking for all 500Nm worth at full throttle, made the 250d the least persuasive of the three engine variants, even though it matches the 220d’s economy while stripping the 0-100km/h time down to 7.6sec. 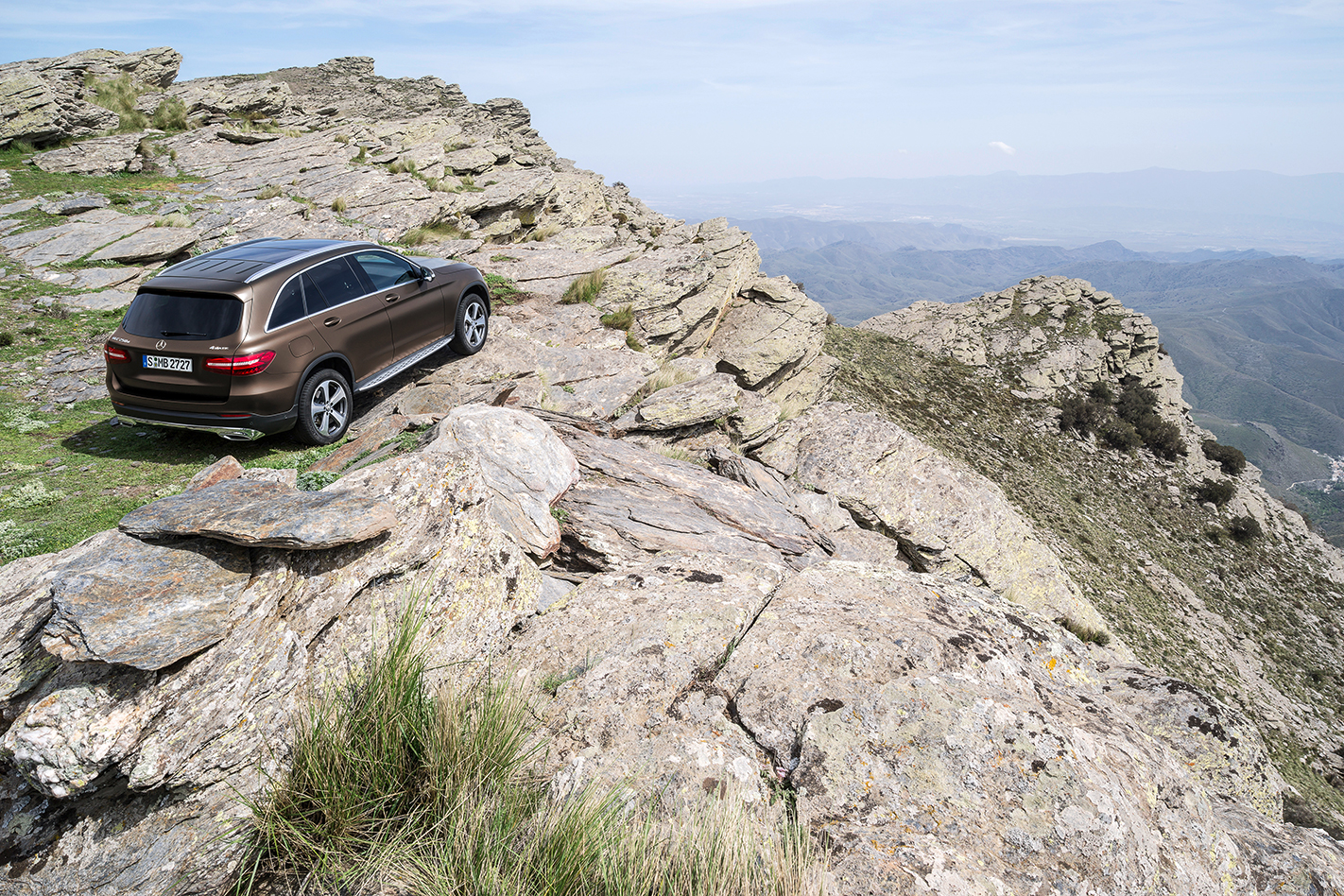 Asked about that thump, 9G-tronic development chief Christoph Dorr told me “it shouldn’t do that”. But he did mention that Mercedes-Benz had engineered in a deliberate ‘kick’ in the transmission’s upshifts when in Sport+ mode to make it feel sportier. To which I countered that an ignition-cut ‘blurt’ would probably be preferred by enthusiasts.

The sweetest of the three GLC models is undoubtedly the 250 petrol. With about 60kg less weight over the nose, it has a greater resistance to understeer, though no GLC is what you’d call inspiring to drive.

For much of the time on twisty roads, the best dynamic combination is selecting ‘Individual’ and choosing the settings yourself – Comfort steering with Sport damping – yet even then the GLC never goads you to drive it harder. 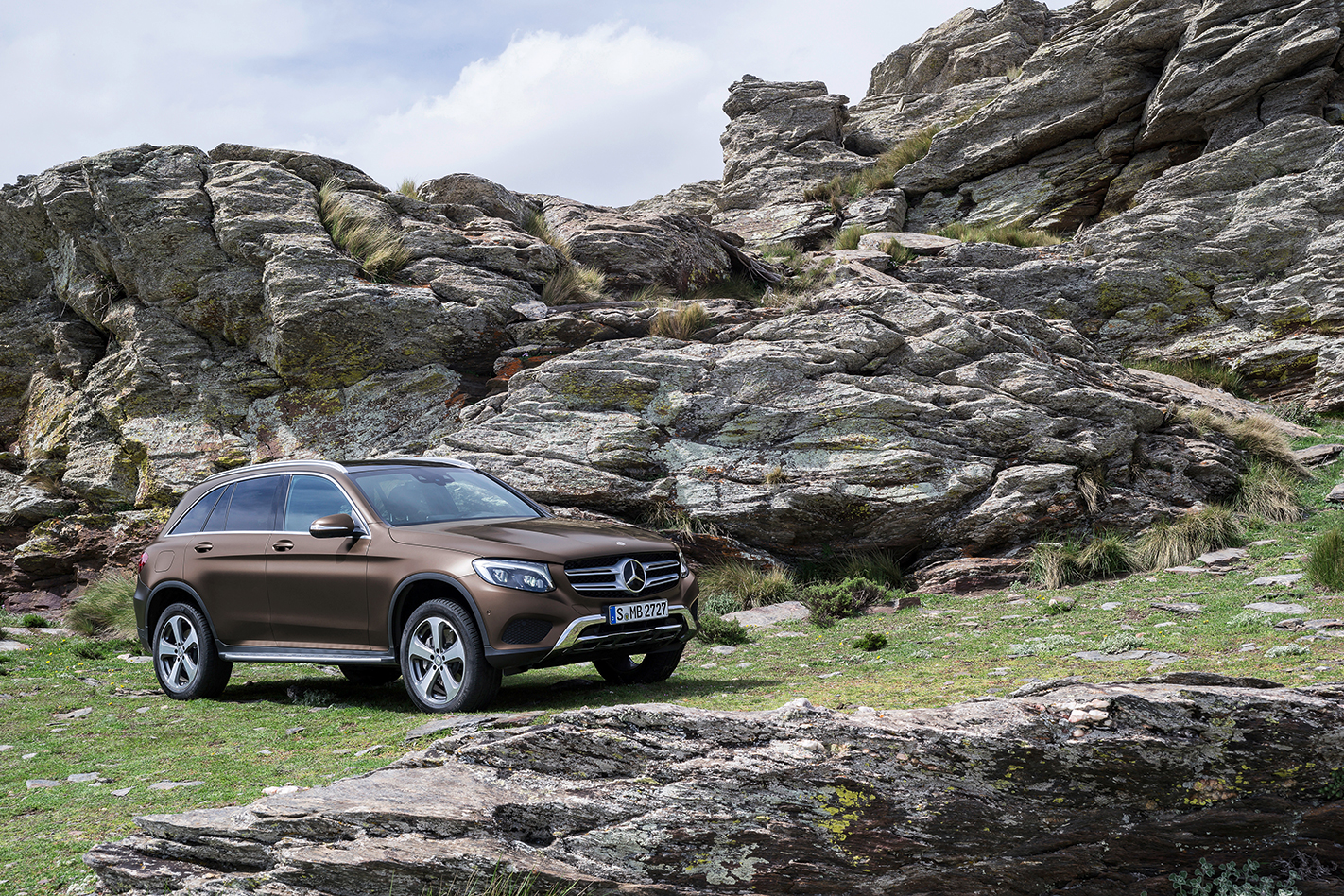 Far more impressive is its overall refinement and the absorbency of the air suspension in Comfort mode when served up really big hits like speed humps. It simply eats that stuff up, far better than it does low-amplitude irregularities on the 20-inch wheels of the launch cars, though it can feel a little floaty at sub-120km/h speeds on the freeway.

We can’t comment about the steel-sprung, adaptive-damper suspension on the 19-inch wheels that will be standard in Australia because there weren’t any available to test.

What ultimately elevates the GLC far beyond its classmates, though, is its interior. It has a rock-star factor that none of its rivals come even remotely close to, particularly BMW’s low-rent X3 and Land Rover’s relatively dour Discovery Sport.

Despite the GLC’s raised driving position, you always feel like you’re part of the car, not sitting on top of it, and it’s easy to forget you’re actually driving an SUV.

Vision is excellent, particularly straight ahead, and while the GLC shares its entire dashboard with the C-Class, its larger, airier cabin gives you an even greater appreciation for its high-quality look and feel. Indeed, the GLC’s interior feels so far beyond its ‘premium’ competition, it makes some of them now appear bad value. 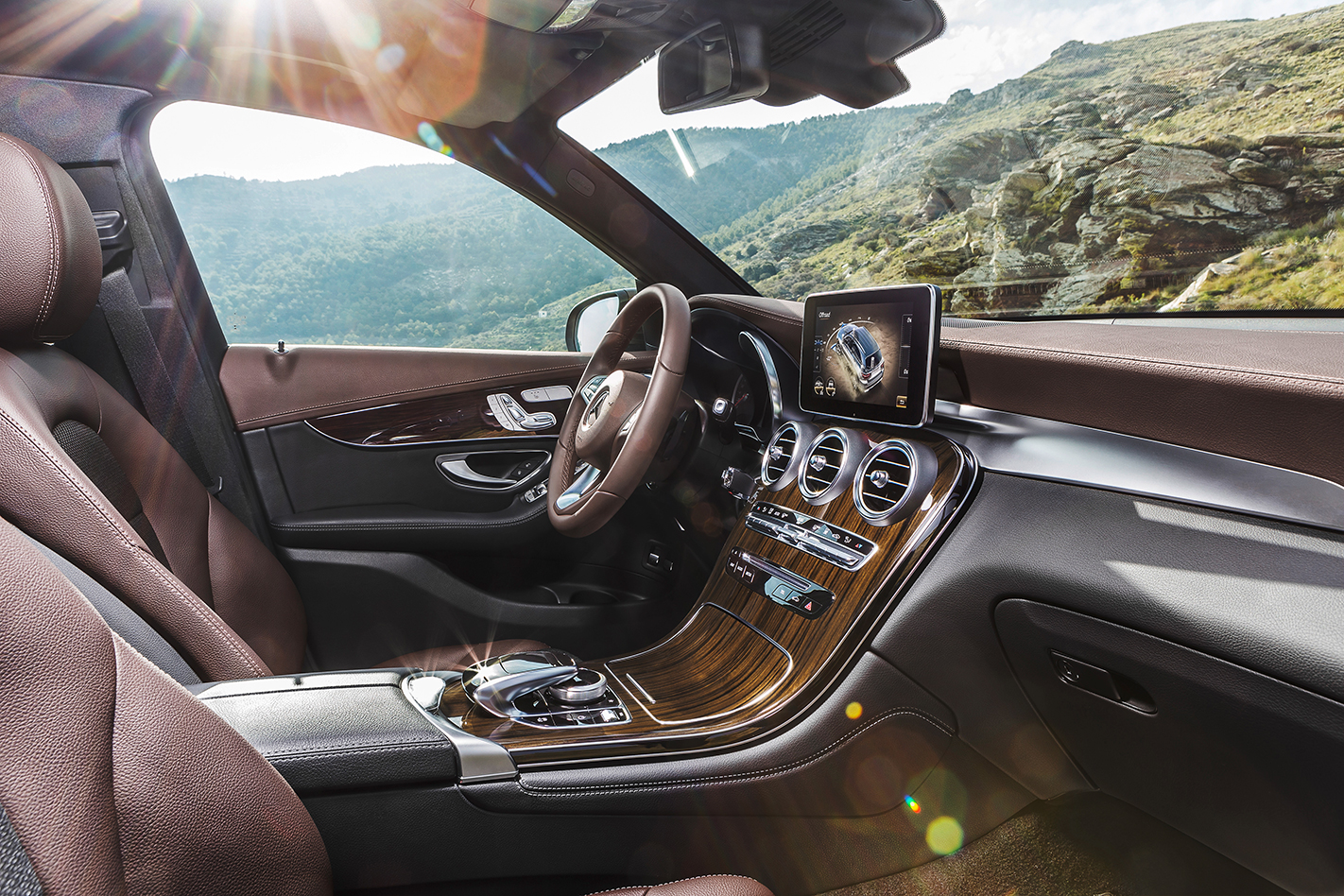 The front doors get dual bottle-holders – one for a large ‘big gulp’, another for a smaller bottle – while the rear seat offers plenty of under-thigh support and loads of leg and foot room.

Individual rear-seat air temperature control with a seven-speed fan, plus one-touch, fold-flat backrests (achievable from both the cabin and the boot) underline the GLC’s class-leading practicality, but it’s little things like the expensive, felt-lined glovebox with air-freshener dispenser and pen holder that make the experience.

About the only cabin detail we didn’t like was the italicised slant of the speedo reading in the head-up display. In an interior bursting with expense, the font seemed like it was pinched from a Mazda 3.

While the GLC isn’t the driver’s SUV a Porsche Macan is, and its turbo-petrol and turbo-diesel engines may not be as sweet as those from its Munich rival, in every other department the GLC kicks goal after goal.

And we haven’t even mentioned its page-long list of safety kit, which rivals an S-Class for its breadth of coverage. Or its off-roading prowess and up to 227mm of ground clearance.

What really sets the GLC apart isn’t its equipment list, or how many airbags it has, or even the Mercedes-Benz dealer experience; it’s the look and feel of this premium offering.

When you’re paying $60K-plus for a handsome wedge of deliciously tasteful SUV, you expect a quality experience and that’s something the GLC serves up on a silver platter. 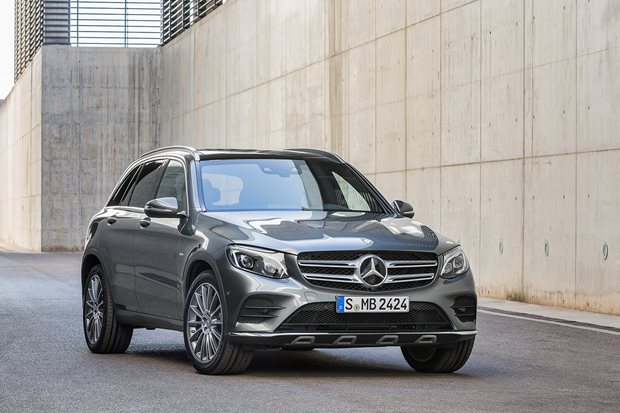 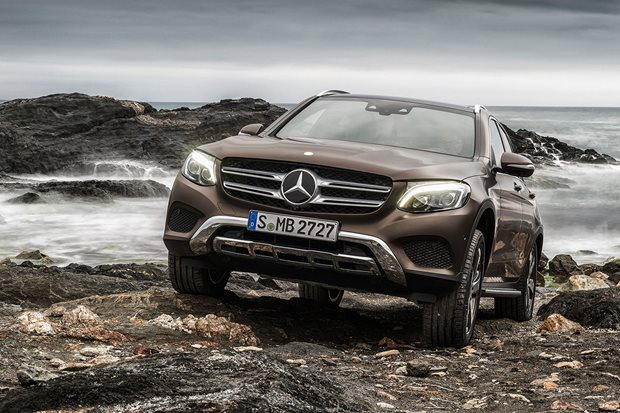 After years of yearning, Mercedes-Benz Australia will finally have a compact SUV to challenge the market dominance of BMW X3 and Audi Q5