Off with its head! Second-generation TT flagship now offered as a convertible

WHAT IS IT?
The soft-top variant of the second-generation, five-pot turbo flagship of Audi’s iconic TT.

WHY ARE WE DRIVING IT?
The previous-generation TT RS was only offered in Australia in coupe form; timing issues precluded us from Roadster variant. So this is our first chance to sample the combination of folding roof and barking five-pot turbo. THE WHEELS VERDICT
The TT RS battles a fundamentally flawed premise – taking a flagship high-performance variant and reducing structural rigidity by removing the roof – and emerges mostly victorious. It looks superb, roof up or down, has a gorgeous interior and class-leading performance. The downsides are not deal breakers. 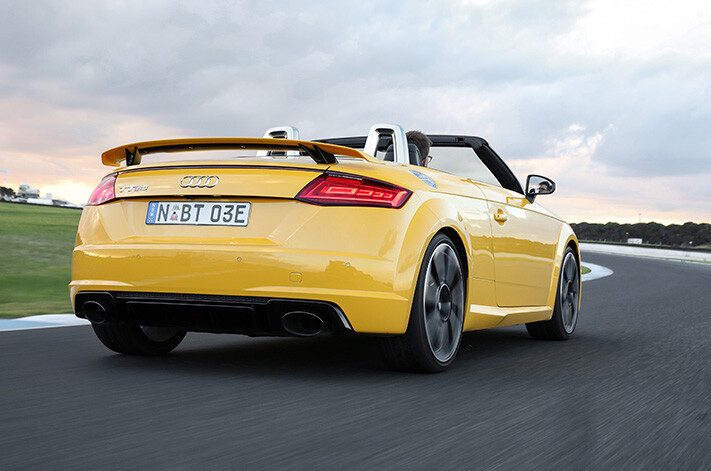 MINUS: More road noise than coupe; poor rear-three quarter visibility when parking and manoeuvring; ultra-firm ride with dampers in dynamic mode; not as throttle adjustable as rear-drive rivals

Outwardly, the concept of taking a flagship high-performance variant of any sporting car and removing the roof seems to make little sense. The roof is a vital structural component of the body, and reducing body stiffness means the suspension can’t function as effectively, tremors can corrupt the steering accuracy, and shimmies and wobbles on bumpy country roads can be unsettling, both literally and figuratively.
Someone once likened the idea of a high-performance convertible as making about as much sense as wearing ear muffs at a Metallica concert.

At least that’s the way it used to be. Modern advancements in materials, welding and bonding, and convertibles being designed in tandem with the coupe variant have negated some of these shortcomings to varying degrees. 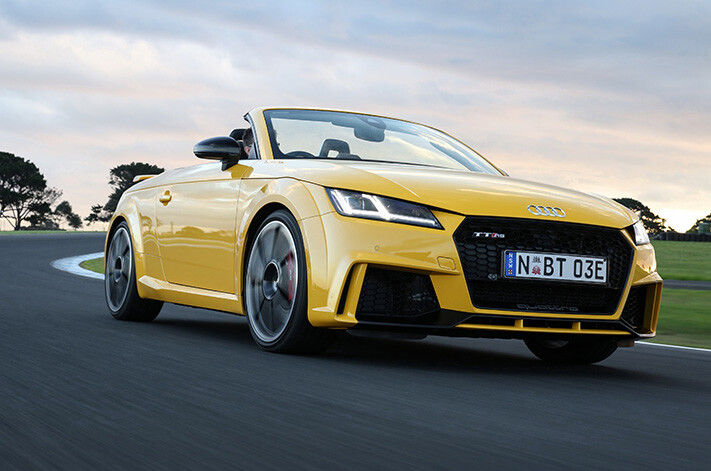 The good news with the new Audi TT RS Roadster is that is impressively rigid and has little of the wobbles and tremors that afflict lesser convertibles. We drove it on typically bumpy and uneven roads leading in and out of Victoria’s Yarra Valley, and detected only subtle, occasional quivers of the windscreen header rail. The steering wheel never once kicked or writhed in response to bumps, and there was little to point to decreased structural rigidity impacting the crisp, grippy handling.

As the flagship of the now-12-strong TT line-up, the RS Roadster is intended to tempt buyers who may otherwise consider a Porsche Boxster S or perhaps a Jaguar F-Type convertible.

This is a new addition to the line-up, not offered alongside the first-gen TT RS coupe due to timing issues. Convertible-specific changes include the deletion of the kiddie seats from the coupe, and the addition of a quality, snug-fitting soft-top that can be raised or lowered in 20sec at up to 50km/h. Roof up, it feels wonderfully snug and well insulated, but back-to back driving with the coupe did indicate a noticeably higher level of road noise from the over-the-shoulder region.

The other demerit comes with roof-up rear-three-quarter vision, which is seriously impaired compared to that of the coupe, with its greater glasshouse area. It’s less of an issue on the move, thanks to standard blind-spot monitoring; more of a hindrance in some parking scenarios and low-speed manoeuvring in dense areas. 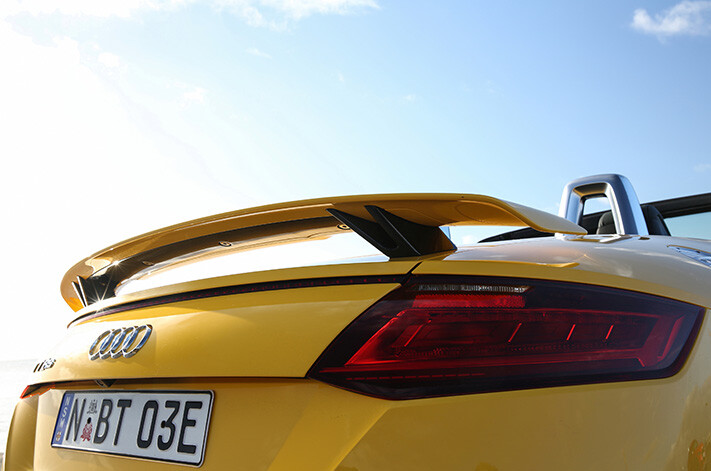 Weight gain is inevitable in a convertible, due in part to additional body bracing and reinforcement needed to retain the rigidity mentioned earlier. Here in the TT RS it’s contained to 90kg (taking the total to 1675kg) which Audi says adds 0.2sec to the 0-100km/h figure. The RS Roadster still feels plenty swift at a claimed 3.9sec, and Audi reckons you’ll need to stump up $300,000 to find a quicker soft top in this country.

Roof-down does give you even greater connection to the soundtrack of the five-cylinder turbo, especially when the (standard-fitment) sports exhaust is switched to its open position.

This really is an outstanding engine; a multiple Engine of the Year category award winner, and full of both character and exceptional performance. It pulls hard from low revs, and delivers a wonderful, warbling, slightly off beat and distinctive note as the revs climb. Work the throttle through a series of corners and it variously snarls and rasps and barks as you shift ratios of the seven-speed dual-clutch gearbox via the paddles. It’s hugely engaging and entertaining, and very, very quick.

The TT RS roadster could be all the sports car many drivers could ever hope for … with one ‘but’. Serious enthusiasts may find its on-limit handling characteristics just a little one-dimensional. It has very high limits of grip, but once breached, there’s not much by way of interactivity for keen/and or skilled drivers without switching off the stability control and really trying to provoke the car into slides. The subtle, tail-out engagement you can achieve in, say a Porsche Boxster, is not part of the TT RS dynamic make-up. For most buyers this won’t be an issue. Plenty will be won over by the stunning interior, which combines sublime design and materials with great seats, excellent driving position and an unbeatable feel-good factor. Consider optioning the carbonfibre inlays ($1700) and upgraded Bang& Olufsen audio system ($1150) fitted to our test car for the full effect.

The soft-top-specific details are executed with typical Audi deftness and precision; items like the wind-blocker that minimises cabin air turbulence, neck-level heating, and Bluetooth microphone built into the seatbelt for clear phone calls at cruising speed. It all makes the $4000 premium over the coupe – $141,900 before options – seem entirely palatable.