The BMW M4 CS looks to distil the lessons learned with M4, M4 Pure and M4 GTS into a highly focused road car that can be put to occasional track use. It’s big on drama and carries a commensurately hefty price tag.

Can anyone really justify paying a premium of more than $70,000 above the entry-level M4 for the CS, a car that packs another 7kW? That’s one heck of an ask, and we needed to discover whether this was a marketing exercise to fleece the gullible or a worthy addition to BMW’s long history of magnificent M cars. It would be great if we could set the price of the M4 CS aside and just judge the car on its objective merits. But we can’t. Those merits have to be contextualised in some sort of frame of reference, and $211,610 is something that colours every judgment on this car. Play in that particular market segment and you’re subject to harsher scrutiny, and the BMW M4 CS withers somewhat under that gaze. It’s the best roadgoing M4 BMW has ever built, which, given the company’s track record with the car so far, wasn’t a particularly testing assignment. Nevertheless, BMW finally seems to have managed to civilise the M4’s power delivery and roadholding while amping up the overall excitement levels. From a dynamic perspective, it’s a major win. It’ll never attain hero status like the old E46 M3 CSL coupe though, which pulls that price tag back into the equation. We’d love this car at $160K. At $211K, we’re not quite sold. MINUS: Opportunistic pricing, could sound a little rawer, still no carbon brakes as standard

BEING largely rubbish at suspense, I’ll get straight to the point. BMW has fixed the M4. Mostly. As you’re probably aware, to date, the M4 hasn’t quite added up to the sum of its parts. It’s been adjudged too spiky, not vocal enough, a little old and bland in its execution and generally not polished enough to assume the position at the top of its class. Its obvious German rivals always seemed to have more about them, and seemed capable of swatting the M4 aside almost at will. Now that BMW has finally discovered the M4’s special sauce, that’s not going to be so easy from here on in.

There is a caveat though; 211,610 of them actually. That’s where BMW Australia has priced the M4 CS, and it’s a serious impost, especially when the M4 range opens at $139K. Mechanical differences are relatively modest given the big premium, the M4’s 338kW/600Nm turbo-six adding a mere 7kW and 50Nm. Or a tenth off your 0-100 if you prefer. So it’s hardly night and day quicker, but the refreshing thing about the CS is that it instead focuses on the things that matter to real drivers. BMW has clearly listened to feedback on the M4 and has set about fixing those issues one by one. The M4 never really wanted for extra pace, so the meagre power hike isn’t anything to get too aerated about. What it ached for was composure and that’s what the CS delivers. Much of that, it has to be said, is accounted for by its tyre choice. The Michelin Pilot Sport Cup 2 rubber has also necessitated some subtle tweaks to the electric power steering system, stability control, braking calibration and the Active M Differential. The Adaptive M suspension system is similar to that of the M4 Competition, albeit with revised spring and damper settings. The most notable mechanical change to the powertrain is the fitment of a less restrictive exhaust system.

Without the nibble of tread shuffle and sidewall deflection you get in the cooking M4, the front of the CS initially feels a little aloof. Lean on it once the tyres are warmed through and confidence comes quickly, the fat Alcantara-trimmed wheel scribing perfect arcs through corners. You’re able to feed throttle in earlier and more decisively too, the rear end both grippier and less susceptible to the heart-in-mouth bucking and skipping of the standard car on typical Aussie country roads. 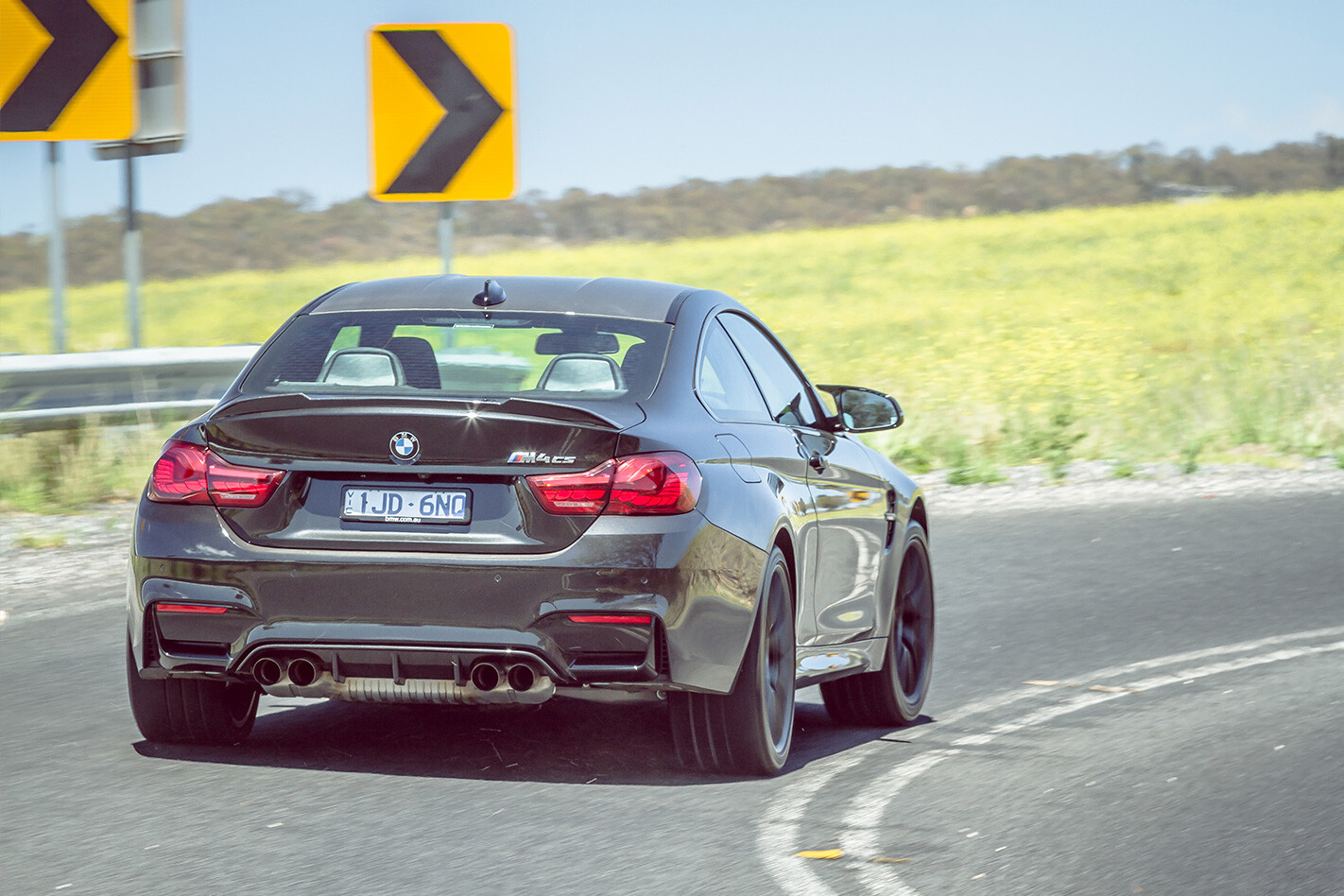 Steering aside, the CS feels a more involving, tactile experience. Those gumball Michelins pick up every stone on the road and pepper the wheelarches bringing a staccato accompaniment to the low-end bass and the engine’s piped-in theatrics above 4000rpm. Pull to a stop and the car looks as if its wheels are wearing a Golden Gaytime wrap of coarse road chippings. The CS promises a riotous soundtrack in its run to the 7600rpm redline, but it never quite delivers. Still, for a turbo six, it isn’t bad. BMW quotes a 3.9 second sprint to 100km/h which would probably take a lot of luck/skill/other to replicate.

Quite how the Germans have the chutzpah to leave carbon ceramic brake discs on the options list for the M4 CS is open to debate, but the four-pot standard front stoppers are acceptable for most road driving. Get them on track and they’re likely to wilt fairly quickly, especially if you’re intent on extracting the maximum potential from the Cup tyres. The sole transmission choice is a DCT seven-speed, which makes sense. It’s a sharp unit that is well calibrated through the Comfort, Sport and Sport+ modes. Likewise, Munich’s done a great job finessing the stability control, with M Dynamic Mode allowing a satisfying ability to nudge the car into a few degrees of yaw before the system decides your papers are not in order. 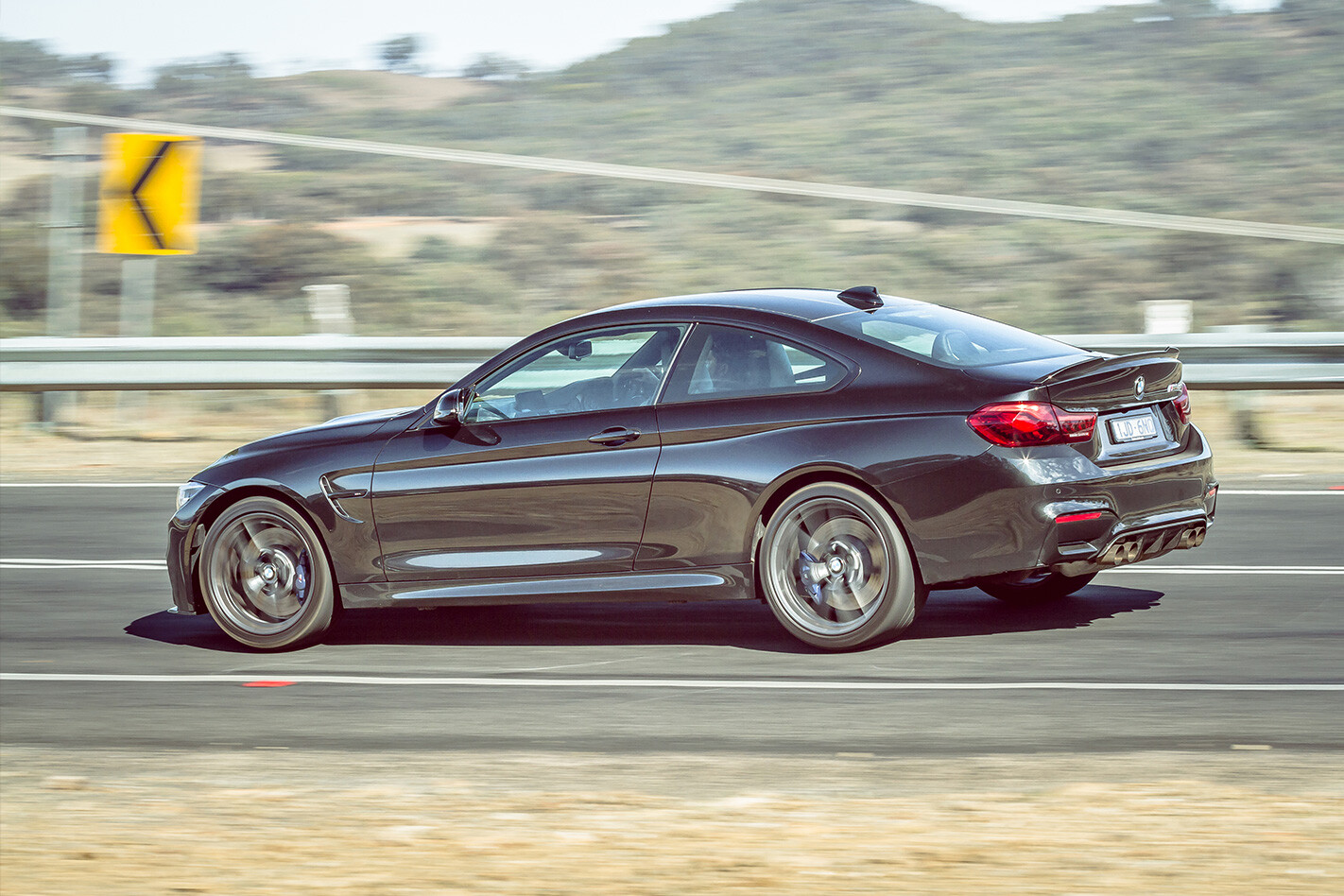 As well as delivering a talented dynamics package, the M4 CS also ladles on a bit of static presence. The jutting front splitter, the yawning air intake in the bonnet and the carbon rear Gurney complement the model-specific OLED tail lamps, bigger diffuser and Orbit Grey alloys. It’s undeniably a handsome thing, and the changes are well-judged insofar as they amp up the attitude a bit without looking as if the M4’s coated itself in glue and driven through a branch of Autobarn at speed.

The interior is a more than a little OTT, with fabric door pulls and scratchy flat door cards, single zone air con and the same cut-down centre stack as the GTS, robbing you of virtually any oddments storage. The chubby wheel has the sort of girth that’s endlessly promised in your email spam box, while the roof lining consists of a flimsy-feeling moulding. The aim is clearly to give the CS a kind of club-racer, GT3-lite feel, but in truth it all feels a bit affected and a slightly disingenuous way of trying to justify the inflated asking price. 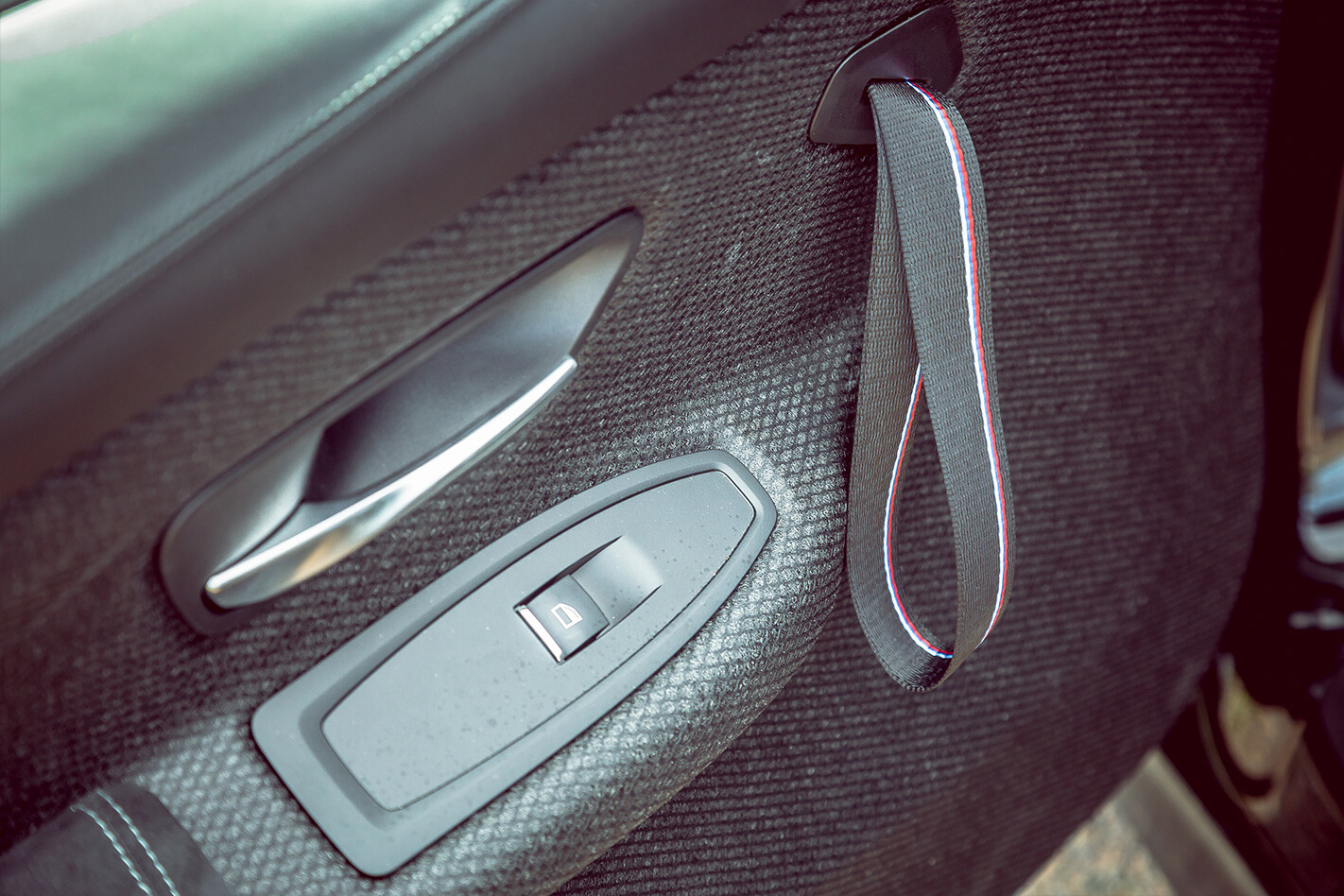 BMW’s remedial work on the M4 shouldn’t give the paying punter such a wallop in the wallet. Leave the window dressing of the CS aside and the material improvements over the standard car can be made fairly inexpensively and the inconvenient truth is that the standard car with Cup tyres and carbon ceramic brakes would likely be just as quick around a track or down a challenging road for $50K less. It would never feel quite like the CS though, and BMW knows it will sell every one of its allocation for this expensive but entertaining car. BMW still hasn’t quite cracked the concept of the ‘right’ M4, but the CS demonstrates that the great car we all knew was lurking somewhere in the F82 M4 package is finally emerging.