Got loads of stuff to move but want more comfort than a truck? A properly engineered right-hand-drive Ram may be the answer

Got loads of stuff to move but want more comfort than a truck? A properly engineered right-hand-drive Dodge Ram may be the answer.

WHAT IS IT?
A US-market light truck imported to Australia by HSV’s licence-holder, Walkinshaw, and converted into right-hand drive via a properly engineered, factory approved process. You buy it from the Walkinshaw subsidiary that does the conversion, American Special Vehicles. 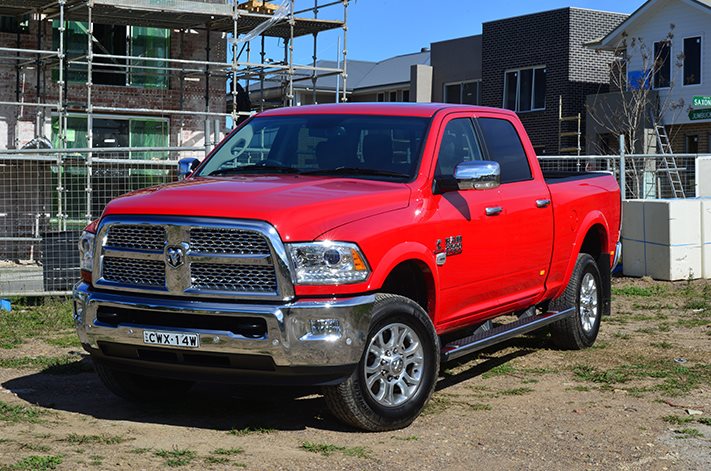 WHY WE’RE DRIVING IT
It’s the first time a converted right-hook “light” truck wearing a Ram badge has arrived in Australia with full factory support. There is a dual-rear wheel model, not offered here, that’s classed as the “heavy” version. 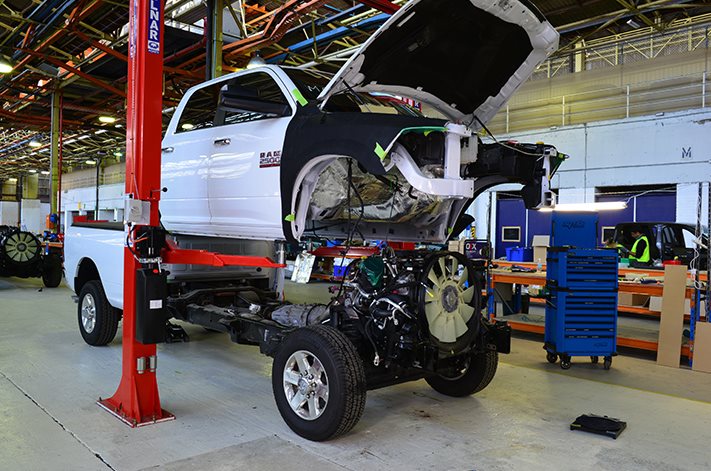 MAIN RIVALS
None. It makes ordinary trade utes look like Tonka toys, and comes with a three-year, 100,000km warranty and full roadside assistance. Only a Mercedes-Benz G-Class Professional ute can carry more on its back; none as far as we can tell can pull more.

THE WHEELS VERDICT
It’s a truck, and drives like one. But it looks sharp, inside and out, and carries enough creature comforts – and metal for the money – to justify the price tag. You don’t want to drive it every day, though.

PLUS: Stonking performance; massive tow ability; comfortable and well-equipped cabin; decent metal for the money
MINUS: Rough unladen ride; high fuel use; not made for the shopping centre car park

THE WHEELS REVIEW
THE zombie apocalypse has just dawned and what’s left of your next door neighbour is clawing at the front door. In front of you are two options for escape: the key to a conventional crew cab trade ute, and the other a key to one of the most beastly behemoths to ever ply Aussie roads, the rootin’, tootin’ Ram 2500 Laramie. Yeah, I’d grab the Ram keys too.

Size, it seems, matters. The squared-off Ram is more than six metres long, stands almost two metres tall and blocks out more than two metres of standard lane width, leaving about 100mm of clearance on either side. In a standard-sized Aussie car park, there’s only 70mm of clearance to either side to play with and a metre and a bit of tray will hang over the white line – if the 17-metre turning circle lets you get in. Yeah, she’s big. But because the gross vehicle mass slips in under 4.5 tonnes – just – you can drive it with just a car licence. 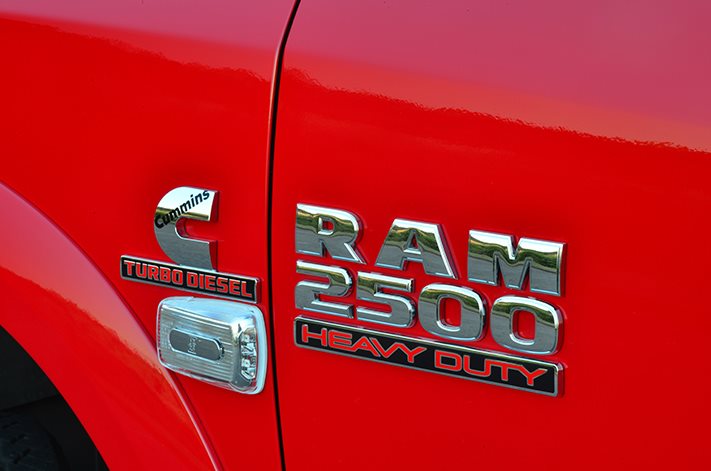 Under the long drop-nose bonnet are 6.7 Cummins-badged litres of cast iron in-line six-cylinder diesel engine producing 276kW of power and a stump-pulling 1084Nm of turbo torque from not far off idle.

Behind the massive engine sits a six-speed automatic transmission fitted to a high/low transfer box capable of sending drive to all four wheels at the flick of a dash-mounted dial, and bulletproof enough to shift more than 11.4 tonnes of combined vehicle/trailer/mates mass – the equivalent of seven Holden Commodores – along the road. 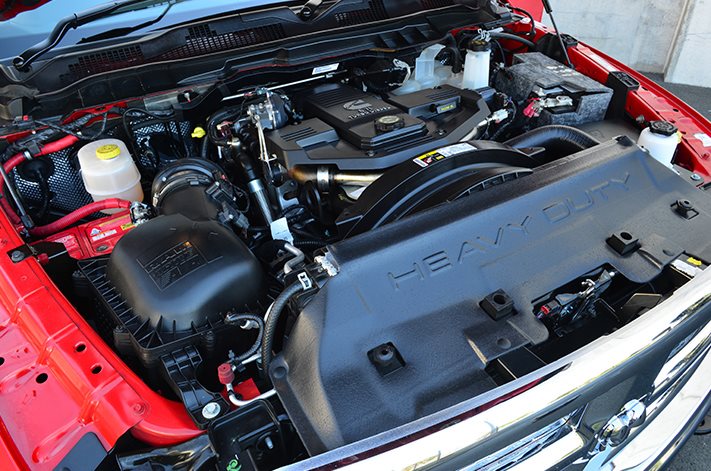 Ram encourages you to load it up; it’s the only passenger vehicle I’ve ever driven with a truck-like exhaust brake fitted that uses engine back-pressure to wash off speed and save the traditional brakes for the last bit of stopping.

We can verify it barks quite a pleasant, neighbourhood-unfriendly “BAAAAAAAAARP” on downhill runs.

Despite its bulk the Ram’s tray can barely cart a tonne, so if carrying capacity is key buy a Mercedes-Benz G-Professional. The Ram’s forte is pulling stuff; with an ordinary towball it’s rated at 4.5 tonnes for a braked trailer (that’s a tonne more than a boggo trade ute), but with a truck-like pintle hitch that number steps up to a spit roast shy of 7.0 tonnes.

We’re driving the cheaper 2500 (there’s also a higher load-rated 3500 available). The entry-level Ram has live axles front and rear attached to the ladder frame chassis via a three-link system up front with track bar, coil springs and a stabiliser bar, and the same down the back but using a more durable five-link set-up. 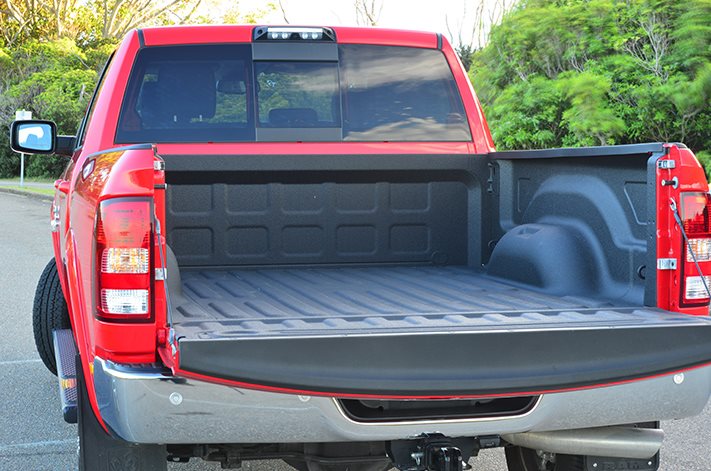 Inside, it’s quite the show pony with swathes of cowhide, faux brushed aluminium and a touch of something that is either wood, or a bloody good plastic imitation of it. The outboard heated and cooled front seats – 10-way powered for the driver, and six-way for the passenger – are broad and flat; the folding middle jump seat that doubles as a multimedia device storage bin, centre armrest and triple cupholder is low-backed and only has a lap belt, leaving you feeling vulnerable. You’re better off to fill the three roomy rear seats that, when not needed, can stow upwards to make a flat floor load space when empty.

It’s reasonably well equipped. The analogue speedo and tachometer frame a decent-sized colour display that scrolls through everything from the transmission oil temperature to the amount of torque the exhaust brake is generating to rattle the neighbours’ fine china. 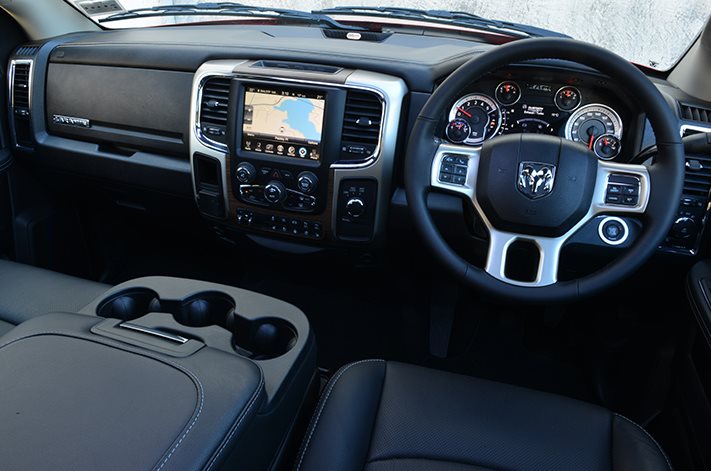 There’s split-zone climate control air-con, an electric sliding porthole in the rear window, satellite navigation on the high-mounted centre touchscreen, and even a dash-mounted 240-volt socket for recharging a cattle prod, although limited to 100 watts so it won’t run a hair dryer or microwave.

It also has dusk-sensing headlights and the huge spa-sized tub includes a night light and load space camera.

Front and rear parking sensors, and a tow-hitch optimised reversing camera do little to shrink the Ram’s Titanic dimensions, though. 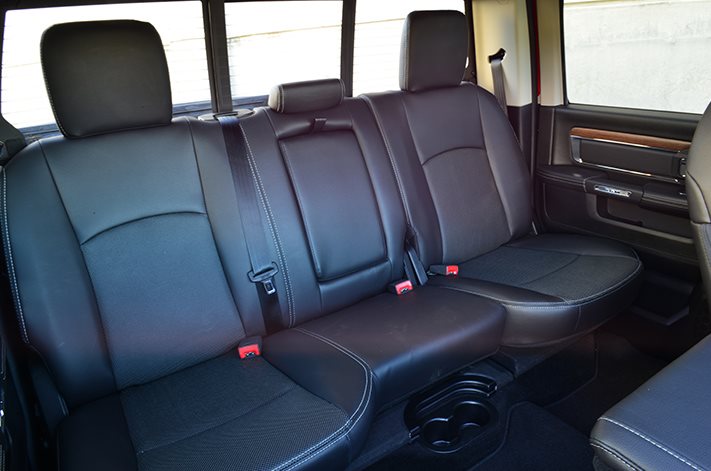 Stab the start button to unlock the steering column-mounted gear shifter (you will have already double-tapped the button on the keyless entry and start fob that remotely fires up the Cummins from the comfort of the kitchen table), flick it into gear and then … find the handbrake. It’s more accurately a footbrake, mounted high and awkward on the side of the firewall, requiring a decent effort to reef on. It’s released via a low-mounted lever in front of the driver’s right shin.

On the road, the Ram’s driving position is commanding. You sit close to the dash – the multifunction steering wheel has only rake adjustment, no reach, although the pedals adjust fore and aft – with a clear view over the traffic in front. Wing mirrors almost as big as elephants’ ears look back and down to the miserable, caged masses gridlocked behind you. 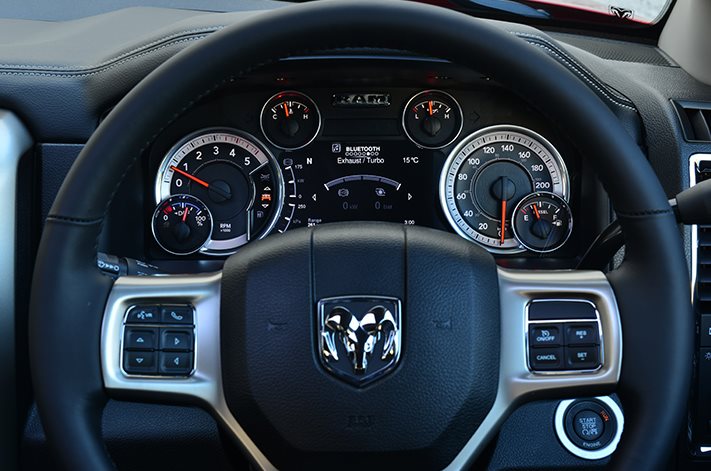 Driving the Ram like a commuter car, though, is its downfall. The engine is powerful and rorty when stepping on the accelerator, and the all-round disk brakes the size of beer garden serving trays wash off speed repeatedly with a forceful shove of the pedal. But the steering lacks feel and is prone to bump steer, and the unladen ride is atrocious.

Bumps at low speeds seem to oscillate around about a 5.0 on the Richter scale, and on the freeway it steps up to about a 7.0. It skipped so badly that at one point it felt as though none of the four load-rated Michelins wrapped around the smart-looking 18-inch alloys were in contact with the ground – we’ll call that a 9.0.

We took the Ram over test roads that have been used to rate everything from sports cars to vans. The immediate feeling is one of disconnection, much like driving a car in a video game while seated on a rollercoaster. Body roll is well controlled but the centre of gravity shifts sharply under the driver’s arse, and the six-speed automatic keeps the big diesel in its torquey hot-spot most of the time.

There’s only a single rev figure given for that peak torque – just 1600rpm – because after that it’s on a long, slow slide downhill. It means there’s really no point to hustling the Ram; progress is better served slowly.

No doubt the Ram will settle down with a load on board, so testing it unladen isn’t seeing the truck at its best.

Damo, the non zombie-like contractor who lives next door to me, has a light truck shuttling himself, up to five other blokes and a decent load of concreting gear to jobs all over the state. He immediately liked the Ram for its comfort and road presence, but when asked if he’d buy one, pulled that tradie face you usually get when asking if the job can be completed by the end of the week – the one that says “yeah, nah, that ain’t gunna happen”. 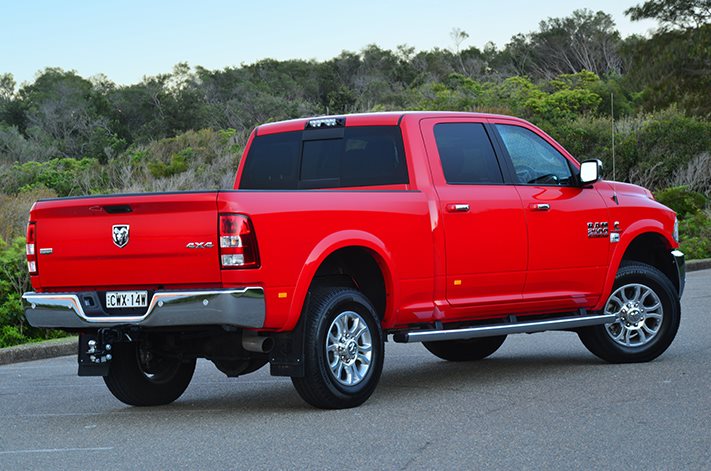 Despite its size, he says, the tray is too small, it’s way too nice inside for muddy boots and that price tag is well over what he paid for his admittedly much less comfortable work truck.

The fuel use wasn’t great, either; he averages around 24.0L/100km fully loaded, while the Ram drank an average of about 16L.0/100km – unladen – on test, its 110-litre tank emptying alarmingly quickly on the freeway.

Yep, so the Ram 2500 Laramie is more about presence. It’s that hauler for the polocrosse horse float, race car transporter or fifth-wheeler caravan rather than the excavator, bobcat or that three cubic metres of brickie’s sand on a tandem axle.

And hot damn Mary-Anne, it will look nice doing it. 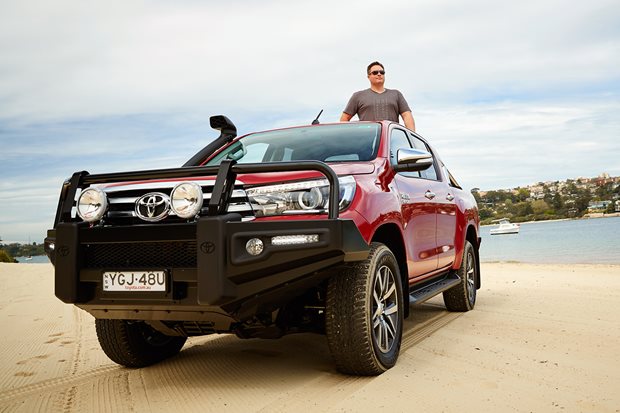 Toby Hagon gets in touch with his inner tradie as he resolves to prove whether the Toyota Hilux really is unbreakable. 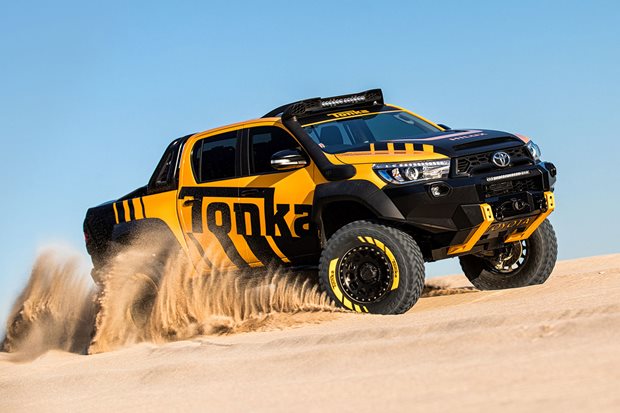 Hilux Tonka Concept puts the toy back into Toyota 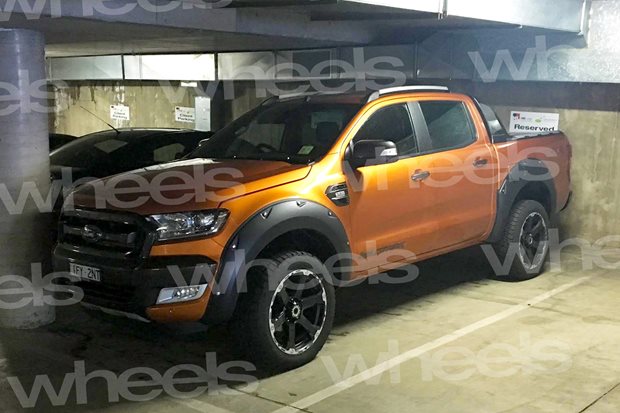 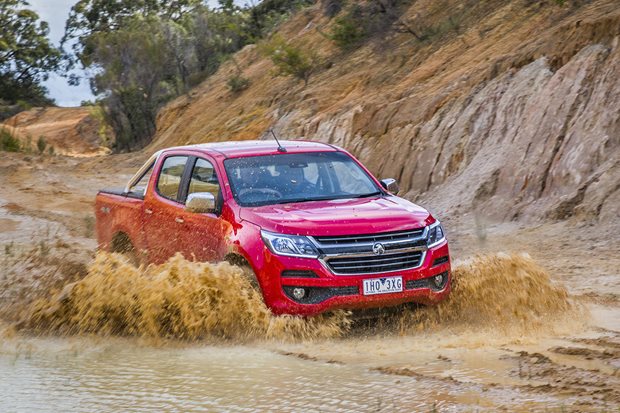 We drive the Chevy-nosed Holden Colorado to see if can challenge it’s popular rivals.