The closely related Peugeot 3008’s more sober sister, sharing almost everything from the B-pillar forward – including drivetrains – but riding on a 165mm-longer wheelbase and featuring a pair of fold-away, easily removable seats housed in the rear floor. The 5008’s less rakish rear end also translates into serious load-lugging ability.

The Peugeot 5008 is an interesting mix, sharing the cutting-edge cabin design of the 3008 with greater visibility and people-carrying credentials it inherits from sharing its 2840mm wheelbase with fellow EMP2 platform partner, the Citroen Grand C4 Picasso. After the dismal failure that was the previous 5008 MPV, this all-new SUV-esque version represents new-wave thinking for a French family bus. Neither too heavy or too bulky, the seven-seat Peugeot 5008 is arguably more well-rounded than its lauded 3008 sibling. Not only is it great to sit in and fun to drive, it’s incredibly useful as a family wagon and comes loaded with kit, without carrying a premium-brand price-tag. A big win for the French. AGAINST all expectations, the legendary brood-hauling ability of Peugeot’s famous station wagons of the past – the 203, 403, 404, 504 and 505 Familiales – has somehow resurfaced in this new-generation people carrier, the Peugeot 5008. Not too big on the outside, yet almost Tardis-like on the inside, it’s the seven-seat SUV you have when you don’t want a bulky, distasteful 4WD.

In fact, there’s something delightfully anti-establishment about the new Peugeot 5008. It features the odd stylistic nod to the SUV set it’s trying to attract – cue the ‘bash-plate’ garnish on the lower edge of its front bumper, and its fairly statuesque 1646mm height (if you include the roof rails) – yet the 5008 is a sleeker, more tautly drawn seven-seat than every rival bar its Citroen Grand C4 Picasso relative. Only parked alongside the avant-garde Citroen does the slightly wider Peugeot start to look more sober.

Ingeniously, front-bumper and grille designs aside, the 5008 shares its entire structure from the B-pillar forward with the smaller 3008 – driver-focused, concept-car-like dashboard included. The sole visual signifier of Peugeot’s cost efficiencies is the length of the 5008’s rear doors relative to the shorter front pair, though on a practical wagon like this, that’s hardly an issue. 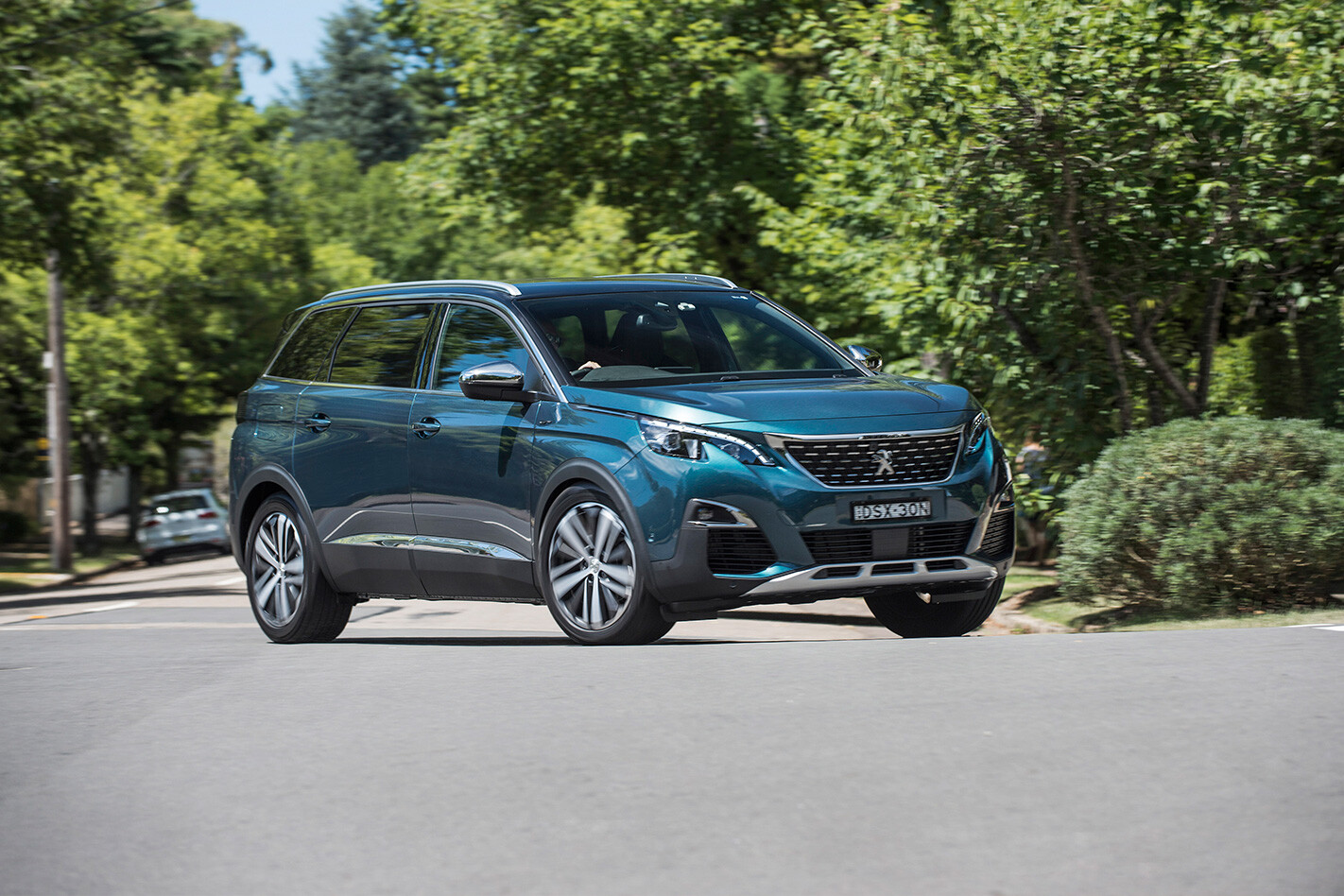 What the 5008’s unique booty achieves is wonderfully space-efficient accommodation, featuring three individual buckets in the centre row, each on fore-aft sliders, and a pair of rear seats that weigh just 11kg each and can be effortlessly removed by anyone who isn’t Victoria Beckham.

Despite a lack of cushion length, the centre row feels plusher than a Grand Picasso’s (riding on the same 2840mm wheelbase), as well as easier to operate, while the rear pair are entirely tolerable for adults, and ample for pre-teens. Yet it’s the 5008’s capacious cargo area that gets your inner Aussie hankering for a camping expedition. Even with the centre seats maxed rearward, there’s 780 litres of space below the luggage cover. The 5008’s sense of adventure on narrow, hilly dirt roads comes as quite a surprise, thanks to an equally respectable 230mm of ground clearance. And if that’s your cuppa, there’s an optional ‘grip control’ system ($200 on Allure and GT-Line variants; no-cost on range-topping GT because it reverts from 19- to 18-inch wheels with all-season tyres) that offers snow, mud, sand and ‘ESP off’ modes, as well as hill-descent control, though I doubt the 5008 would enjoy the sand hills of Stockton beach very much.

What it does relish is a resounding flogging on twisty roads. Even the 1575kg 2.0-litre turbo-diesel variant – 100 kegs heavier than the 1.6-litre turbo-petrol 5008 – feels chuckable in a way you’d almost never describe a seven-seat SUV, enhanced by the flagship GT’s superb Continental 235/50R19 tyres. You don’t lose a whole lot in ride quality on the GT’s 19s either, though no 5008 feels plush. Even the base Allure on 225/55R19 Michelins rides firmly, with persistent tyre noise on coarse surfaces pervading its otherwise-admirable sense of calm. The benefit of this suspension discipline is a lovely fluency to the 5008’s handling and body control. Its longer wheelbase imbues it with a more relaxed demeanour than the 3008, yet there’s real panache to the way the seven-seater’s (torsion beam) rear end wants to be part of the action, maintaining the 5008’s terrific poise. And you can’t discount the size-reducing benefits of Peugeot’s ‘i-Cockpit’ driving position, blending a superb little steering wheel with accurate response and a tight 11.2m turning circle. It’s also nice to have a Sport mode that adds intelligent weighting to the steering, rather than glugs of Play Dough.

Arguably the sweetest piece of the 5008 experience, though, is its cabin ambience, combined with Peugeot’s competitive pricing. The $42,990 Allure’s houndstooth seat trim with leatherette detailing is posh-luggage worthy, while the ‘Aikinite’ microfibre/leatherette and optional full Nappa leather with double-stitch detailing in petrol GT-Line ($46,990) and diesel GT ($52,990) is seriously top stuff, garnished by sensual ‘mouse fur’ inserts spanning the dashboard and front door tops. Love Peugeot’s vastly improved 8.0-inch centre touchscreen too, now working in combination with a bunch of cool piano-key finger controls, and even the trigger-grip transmission lever, whose futuristic style isn’t at the expense of operational ease. About the only area of notable weakness is the 5008’s engines, both of which date back well over a decade. Yet for all their lack of on-paper pizzazz, the 121kW/240Nm turbo-petrol (10.5sec to 100km/h) and 133kW/400Nm turbo-diesel (10.2sec to 100km/h) are torquey and driveable units that effortlessly compliment the 5008’s fluid dynamics. Dare I say it, I quite like the diesel’s amplified ‘Sport’ sound pumping through the GT’s gutsy stereo.

In fact, it’s actually quite difficult to nominate any genuine flaws in the 5008. Even with everything but the Eiffel Tower optioned into it, the handsome $58,740 GT seems like pretty decent value, especially compared to what premium-brand Euros charge for something similar. And there’s a long-legged, characterful flavour to the 5008 that feels unashamedly French, and proudly Peugeot. Finally, the Frogs have rediscovered the ability to build a great breeder bus.