It’s a battle of Australia’s most popular, as we pit the country’s three best-selling small hatches against each other

VOLUME-SELLERS are rarely sexy. No surprises there. If you’re reading this expecting the usual Wheels-style gloss, glamour and horsepower, you may be better served browsing our other content instead. But you know what? I bet you won’t.

Nearly one in five cars sold in Australia belongs to the small car category, and the three small hatches we have here are the most popular models of that segment: the Toyota Corolla, Mazda 3 and Hyundai i30. 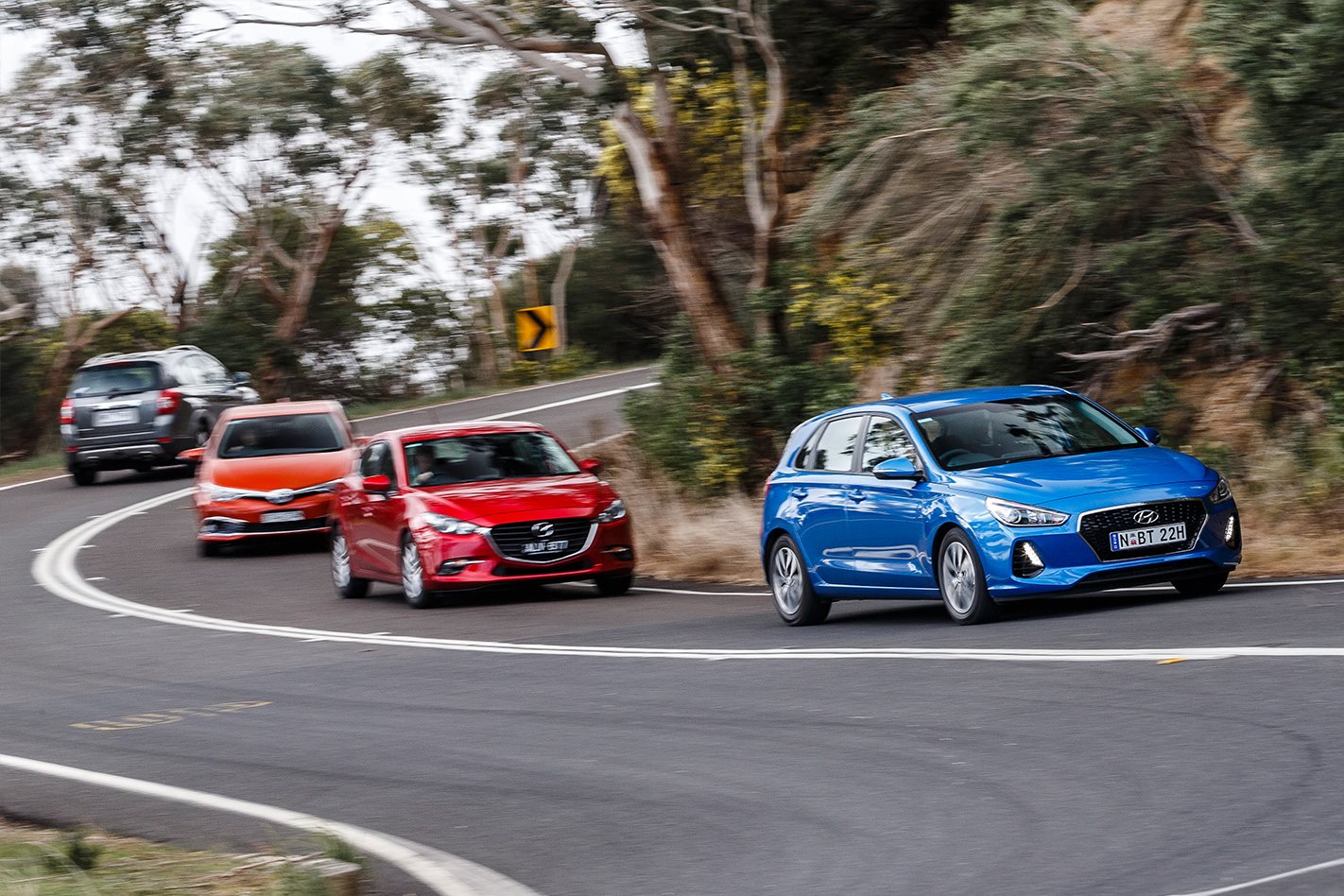 Not only that, but the variants that we’ve gathered are the most popular ones too – Ascent Sport for the Corolla, Maxx for the Mazda 3 and Active for the i30 – all automatic. All exist at the lower echelons of their respective hierarchy, which speaks volumes about the priorities of shoppers in the small car segment – price is paramount.

But which is the best? For years, the default answer to the question of “which runabout hatchback should I buy” has been “Corolla”, but the i30 Active’s $23,250 retail price is lineball with the Corolla Ascent Sport and the most popular Mazda 3 is $1640 above those two at $24,890.

The Corolla is further disadvantaged by its age, given it launched in its current generation in 2012. The Hyundai only arrived locally this year, while the Mazda 3 is only a year younger than the Corolla. Put the Mazda and Toyota side by side, however, and most would guess that the age gap is much broader than that. 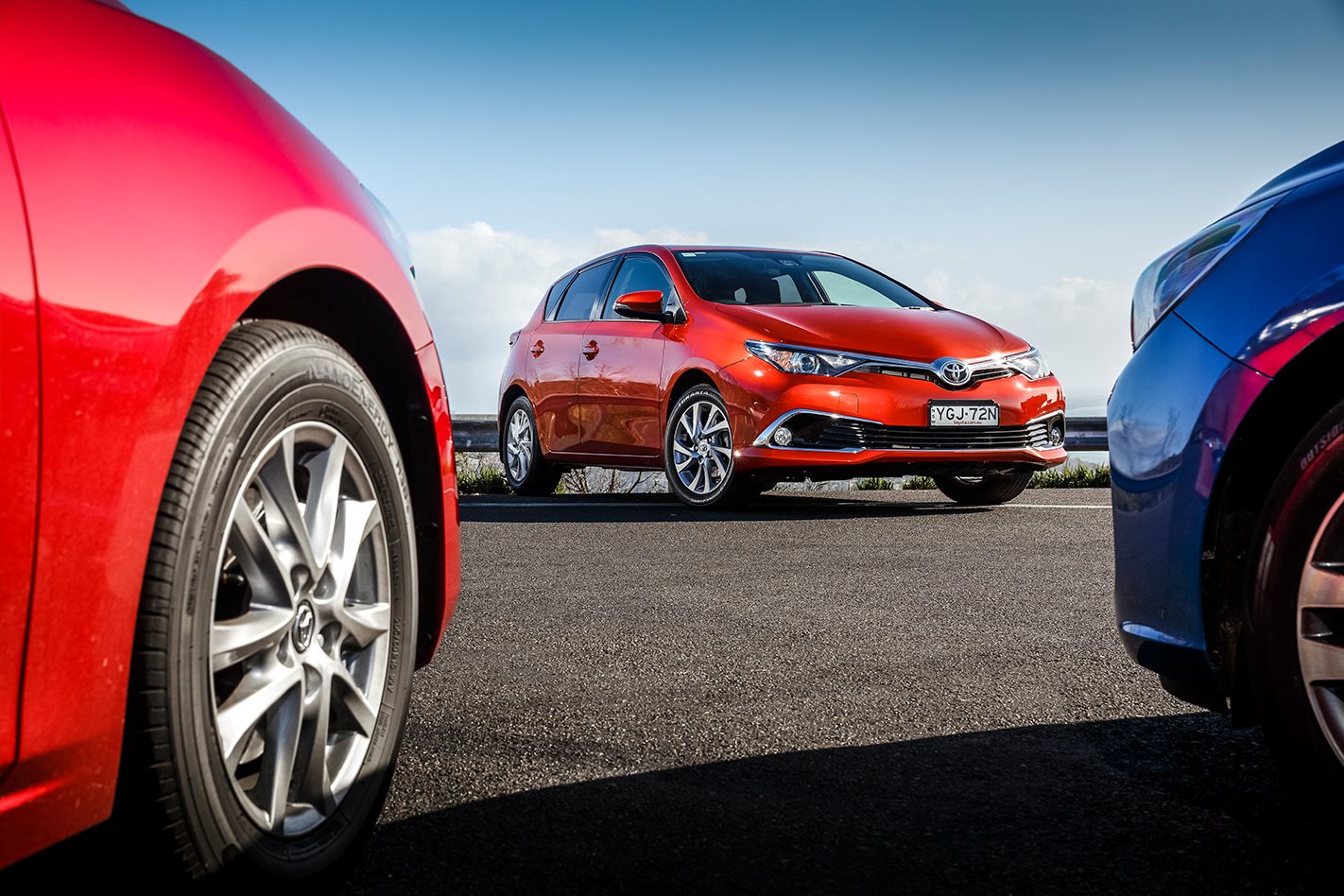 Inside, the Corolla’s heavy-handed design and near-vertical dashboard combine with unpleasant textures and hard plastics to give it the wooden spoon in cabin quality. It’s comfortable for the driver at least, thanks to a relaxed driving position and height-adjustable seat, but the front passenger misses out on height adjustment - which put our six-foot co-pilot uncomfortably close to the headlining – and the back seat’s generous legroom is offset by flat cushions and a dearth of under-thigh support.

Infotainment stinginess costs the Corolla yet more points. A clunky touchscreen interface and low-set screen harm it ergonomically, while there’s no provision for any form of smartphone mirroring. Further salt in the wound is Toyota stinging you $1000 extra to put sat-nav in the Ascent Sport, a feature which is standard in the Mazda 3 Maxx and i30 Active. With the addition of the autonomous braking-equipped safety pack and premium paint, that takes the price of the Toyota on test to $25,450. 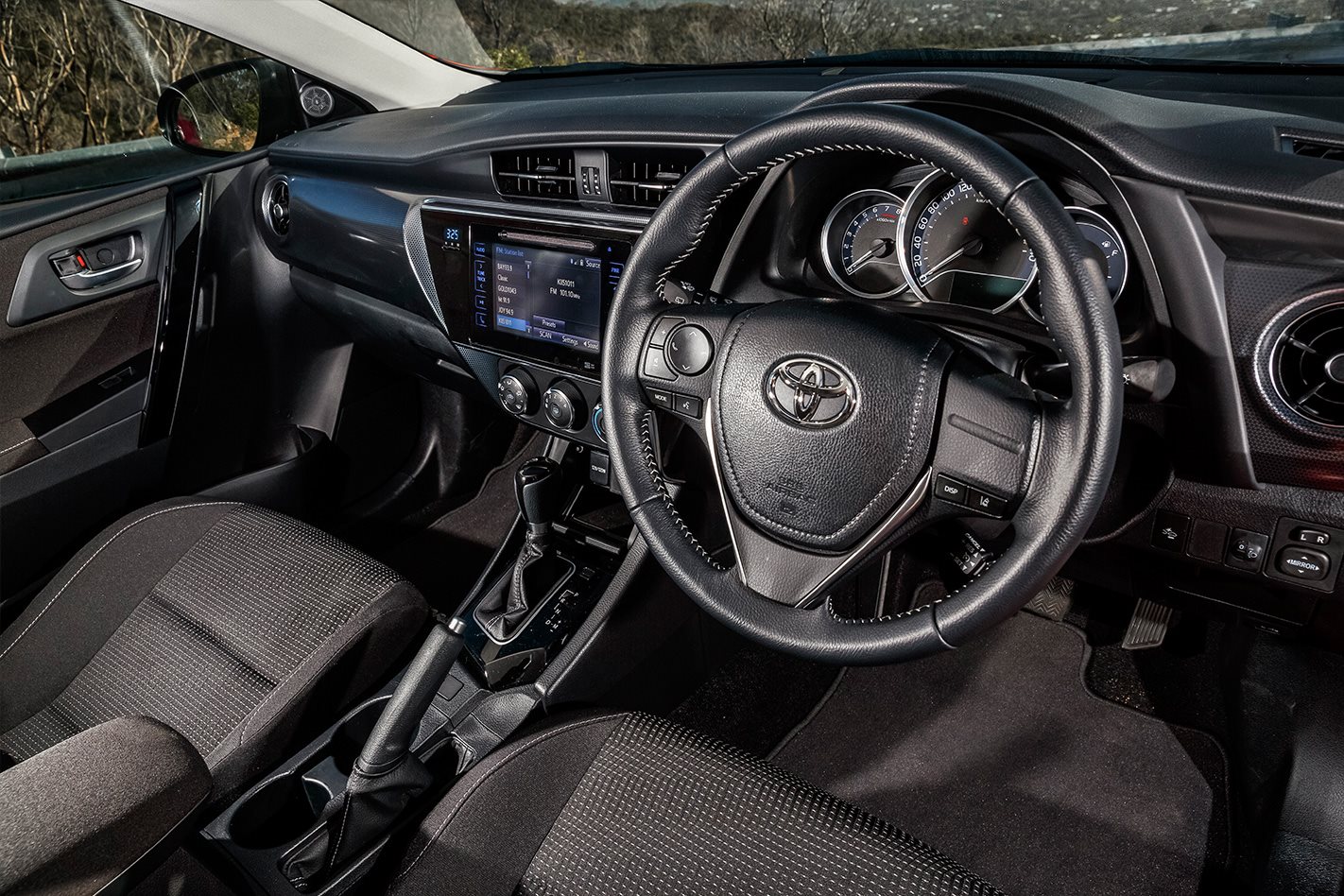 Hop into the Mazda 3 and you won’t find anything in the way of Apple CarPlay or Android Auto phone mirroring tech either, but with far slicker graphics, a BMW-style rotary remote controller on the centre console and a tombstone screen perched right atop the dashboard, its utility to the driver is vastly better.

On top of that, the Mazda 3’s more cohesive interior styling, upmarket materials and finer-grained plastics give the Maxx – which is just one rung above the base Mazda 3 Neo – a borderline premium flavour that the Corolla can’t hope to equal even in its higher grades. 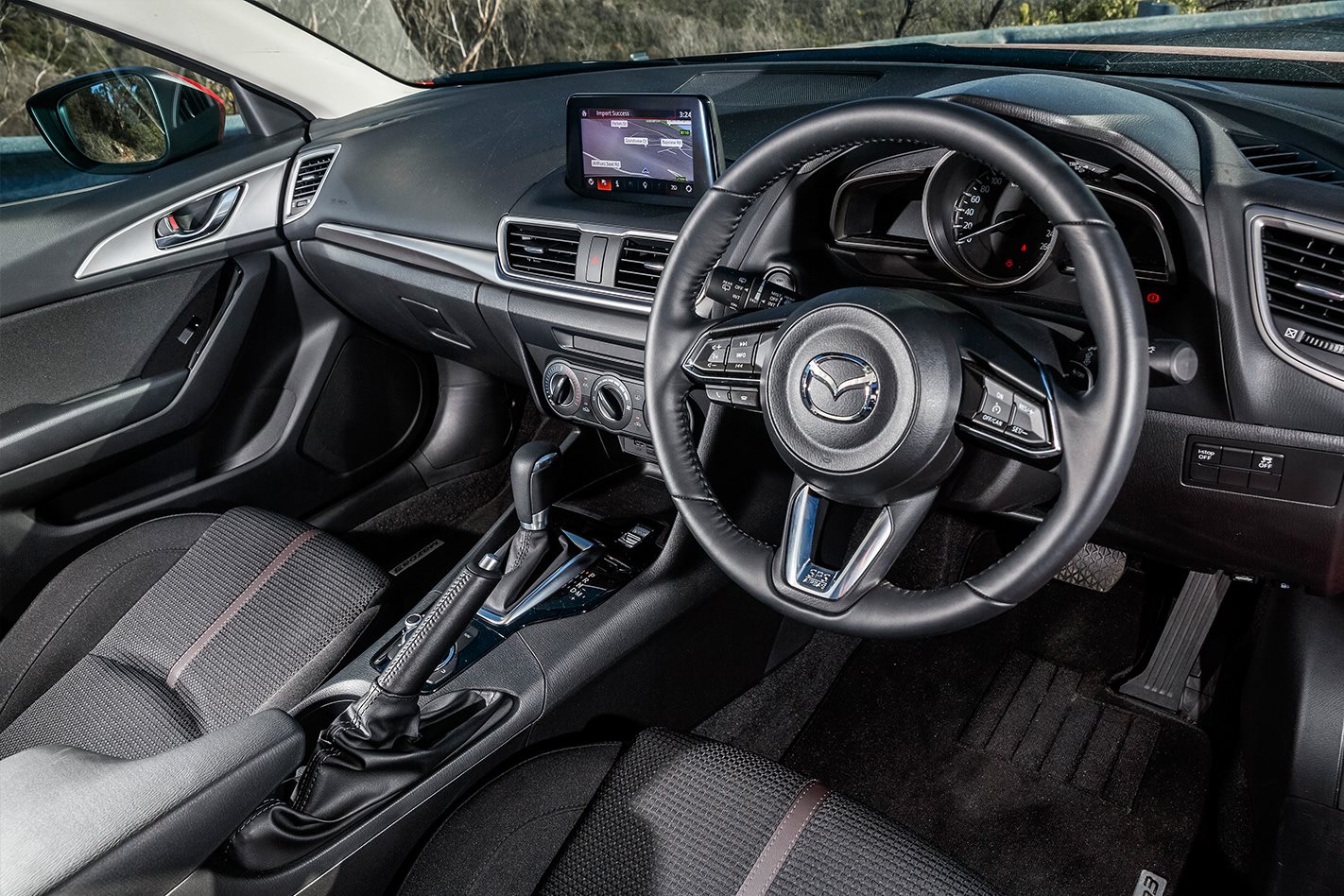 The Mazda 3 Maxx in question sported an as-tested sticker of $25,338 thanks to premium paint and floormats, but was otherwise standard. With autonomous emergency braking, satellite navigation, push-button ignition and blind spot monitoring already on the spec list, the Mazda edges ahead of the Toyota for value while also packing a higher-end cabin treatment. Balancing that out is a shortage of rear seat legroom and headroom

But we’re familiar with these traits, given both the Mazda 3 and Toyota Corolla have been on the market for around half a decade now. The newcomer is the i30, and it’s the spearhead of Hyundai’s campaign to catapult itself to the top of shopping lists without relying solely on mega-keen driveaway deals. 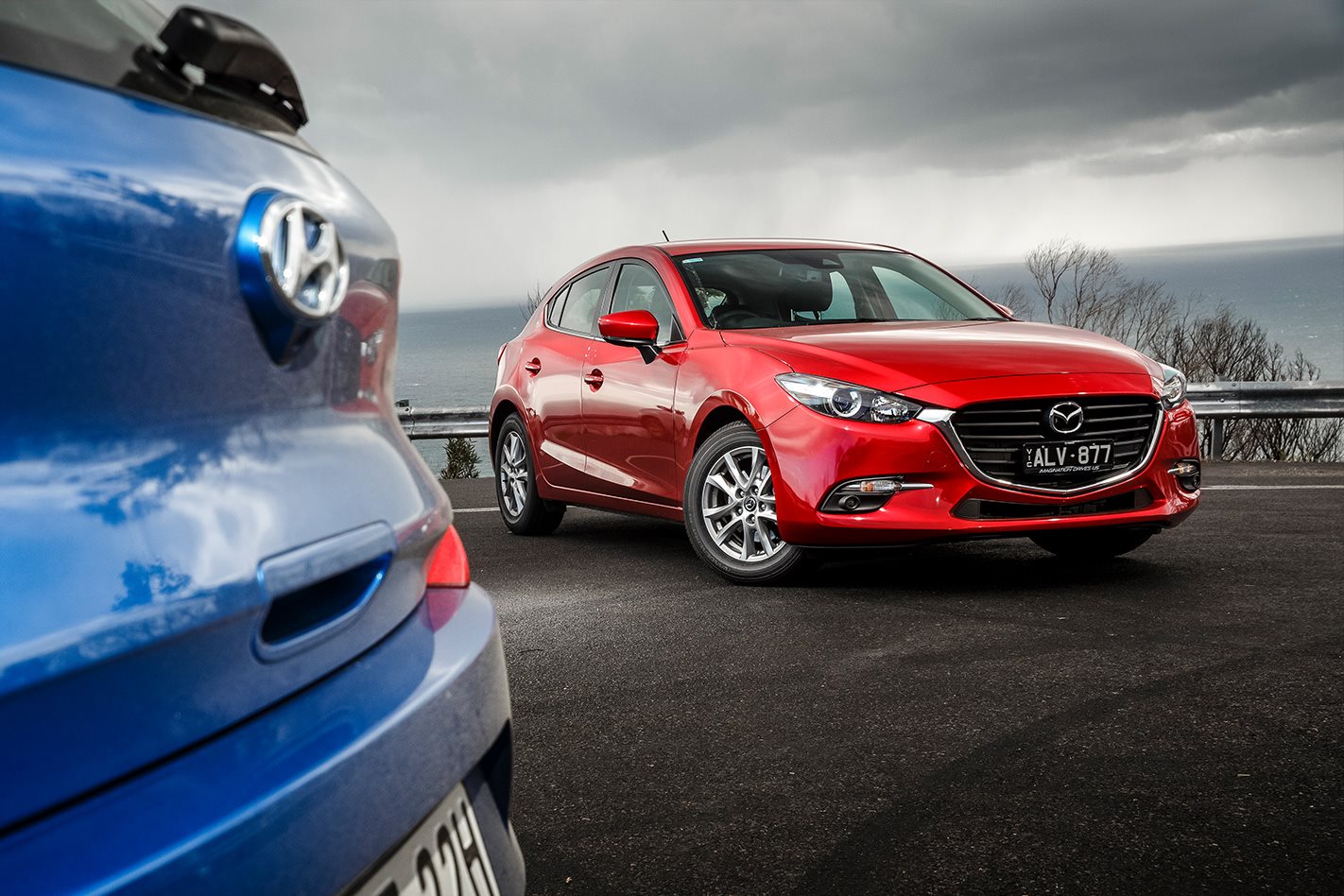 First impressions are hurt by a bare urethane steering wheel, and the i30’s cabin is a sea of black plastics with a few token splashes of silver-painted trim to offset the darkness. That said, it’s thoughtfully laid out and its high-mounted 8.0-inch infotainment screen is not only the largest and easiest to read, but also flaunts Android Auto and Apple CarPlay smartphone mirroring for extra connectivity options.

Big buttons, clear dials and an intuitive dashboard layout are other i30 virtues, though you’ll need to reach far to get to the leftmost buttons flanking that big screen. Not a huge complaint mind you, given controls on the steering wheel cover the same functions. 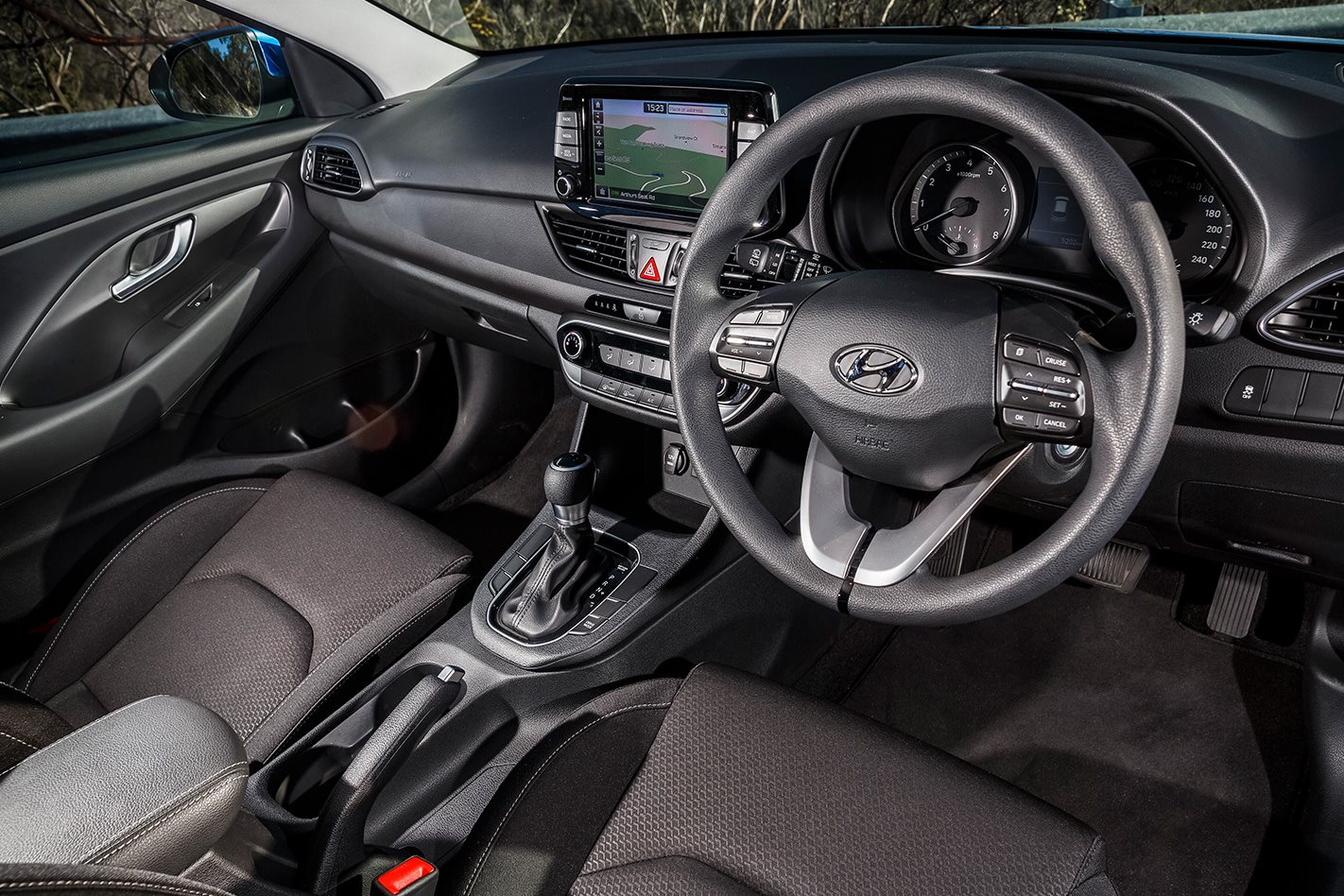 The hard plastic shells of the front seats are a greater blot on the i30’s scorecard, given the tight rear footwells – the tightest in this group – will see the kneecaps of your backseaters scraping against their coarse-grained surface. It’s a shame, given the i30’s rear seat otherwise scored highest for overall comfort.

It’s a give-and-take battle inside each of these three, with the Corolla boasting the most space, the Mazda rocking the most sophisticated design and the Hyundai blessed with the most modern infotainment tech. It’s a different story on the road, with the ranking becoming clearer after spending time behind the wheel. 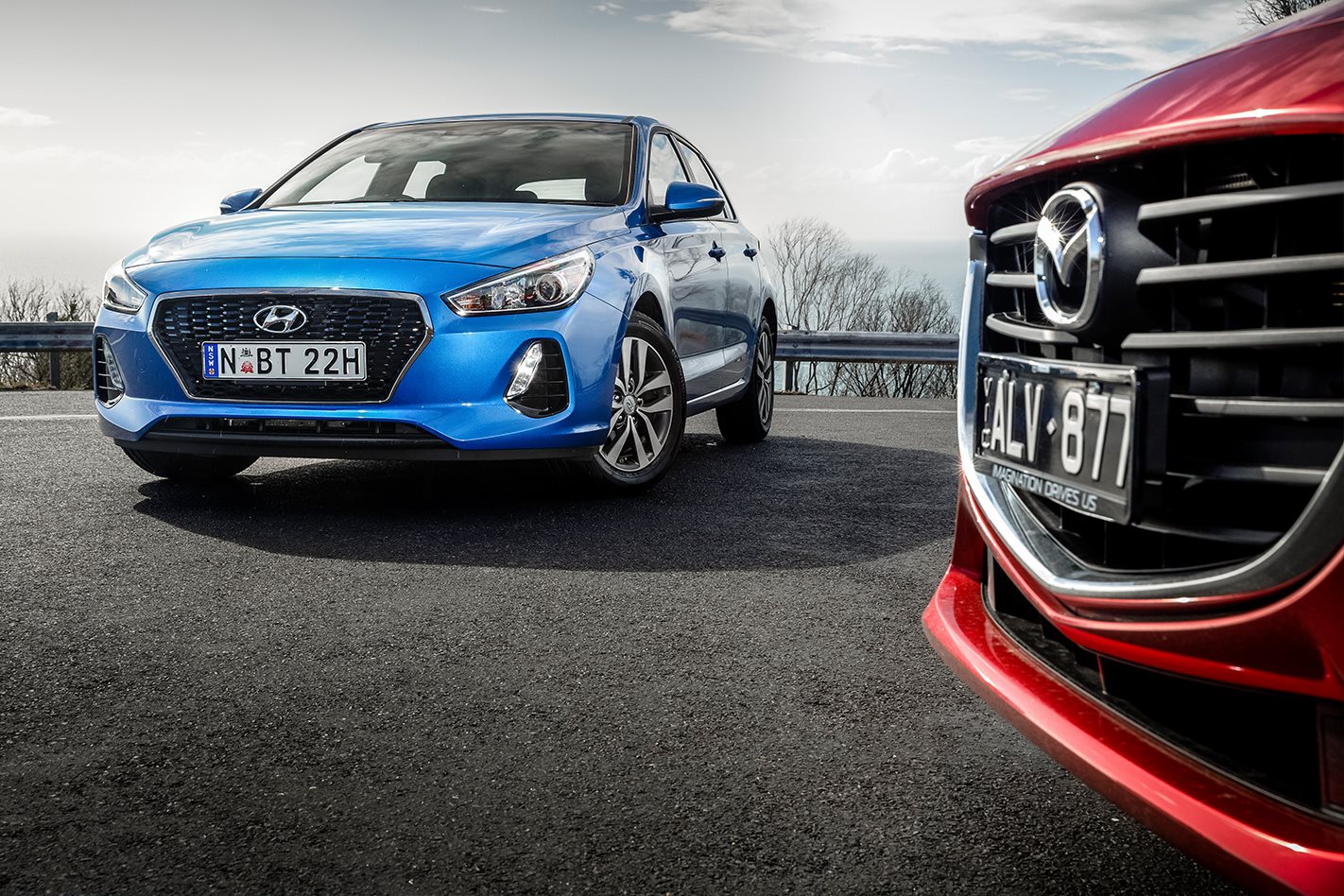 The Corolla is well behind the times, a product of Toyota’s ingrained conservatism that sees lengthy platform, powertrain and gearbox lifetimes. That age manifests itself in a coarse and noisy engine, a CVT that feels doughy and reluctant to step off, and front and rear suspension tunes that fight constantly over which axle should have authority over the car’s direction.

While the Corolla doesn't completely shame itself around corners, it's clearly not tuned with fast direction-changes in mind. Its slow steering requires a lot of input to get it to turn in, and though the Toyota is the only one in the group not to roll on efficiency-biased rubber (instead being shod with more upmarket Bridgestone Turanza ER300s), it was the most prone to understeer. 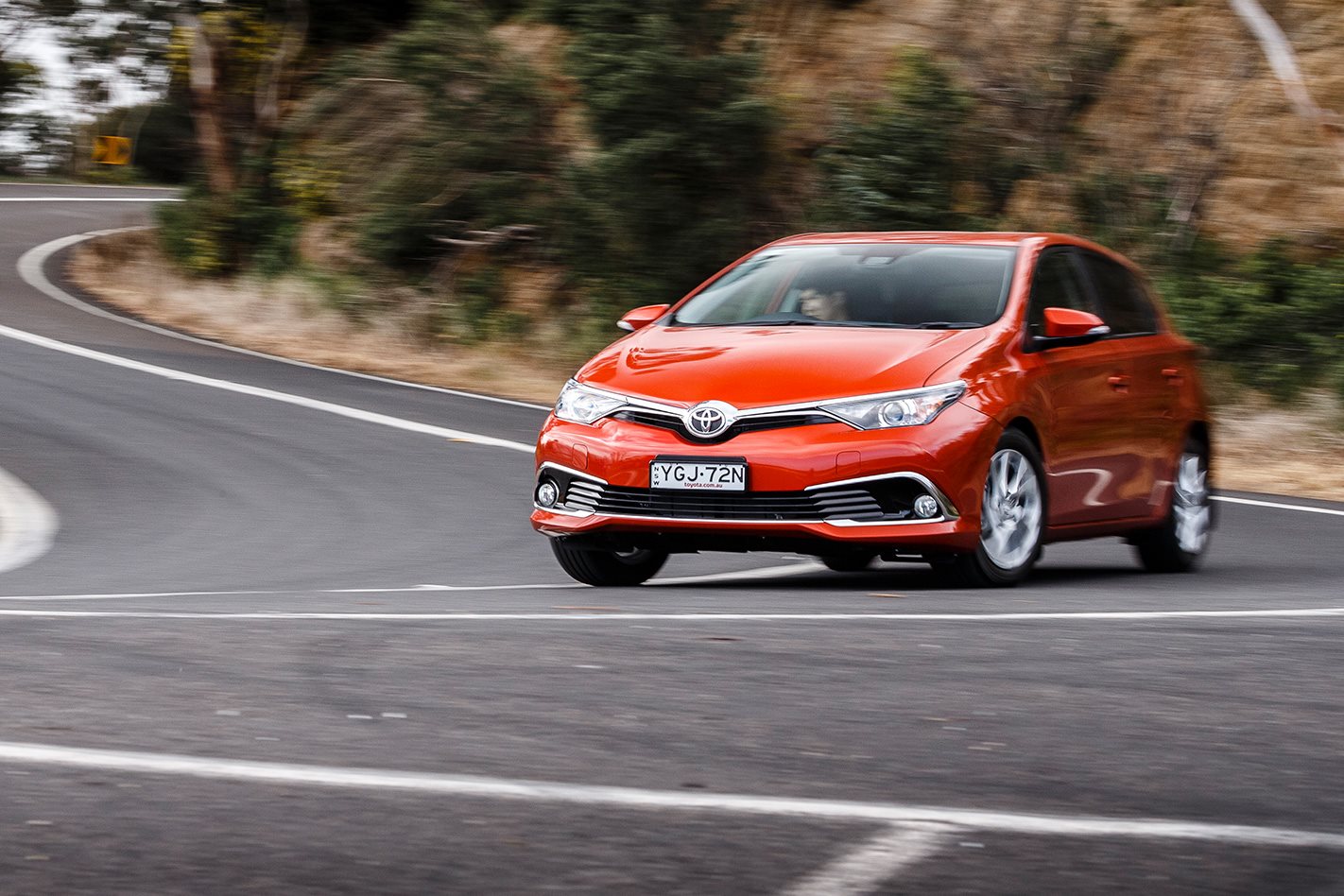 It's a sharp contrast to the Mazda 3, which is composed, stable and alert at all times. It may have a firm ride over sharp bumps but it's not kidney-punishing by any means, and that chassis is married to a responsive, engaging and accurate steering rack and a pointy front axle.

The Mazda 3 is commendably consistent when it comes to offering a full spectrum of performance. Its focused suspension is matched by an eager high-compression engine, which relishes revs and eggs the driver on through its rorty four-cylinder exhaust note. Mazda's paddle-shifter-equipped six-speed automatic is a pearler too, with decisive shifts and a Sport mode that actually encourages spirited driving by holding revs higher and giving preference to lower gears. 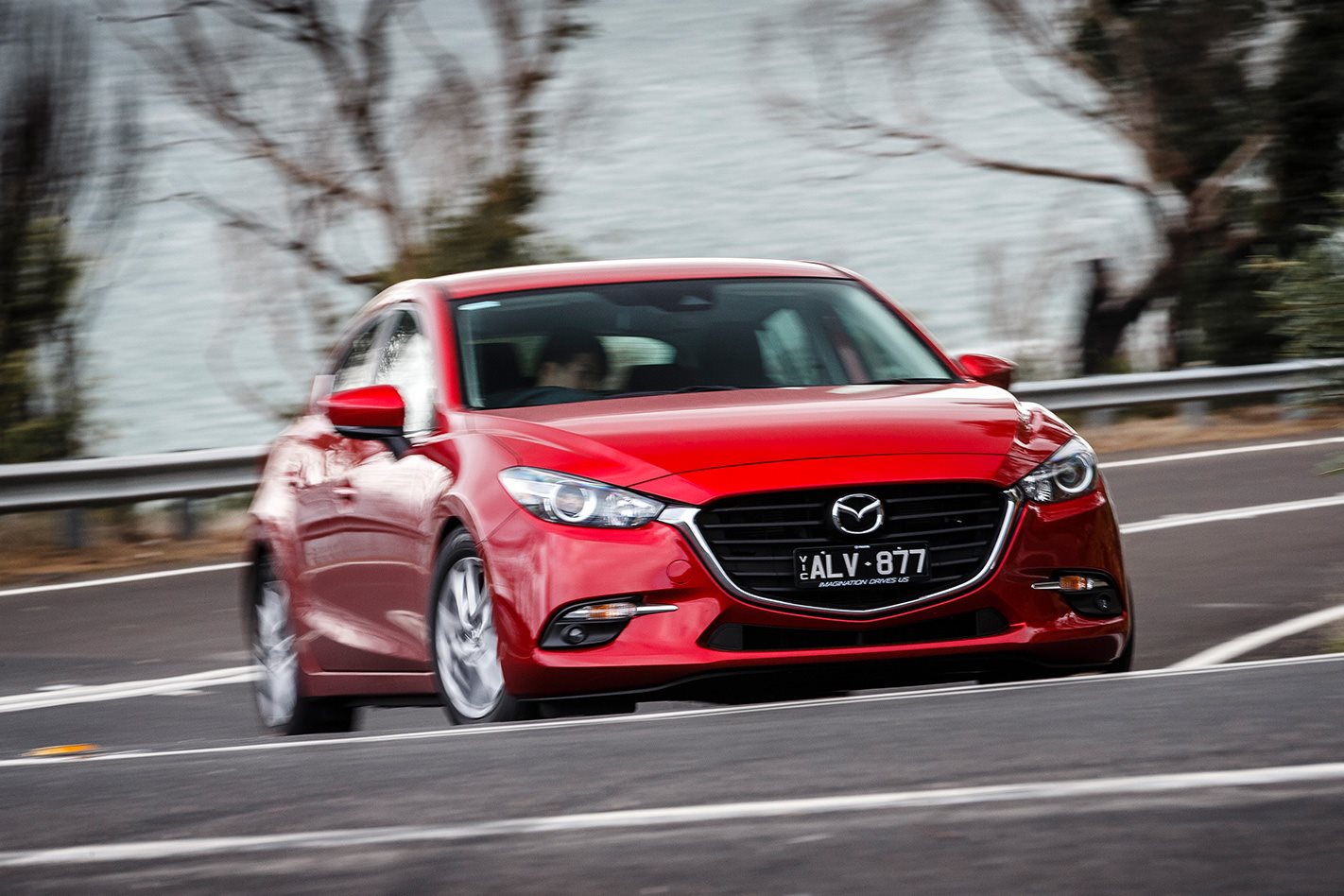 A smidge of rack rattle and high road noise are the biggest complaints about the Mazda 3's driving experience, with the firmish suspension only an issue if your commute takes place over truly heinous roads.

But if you want the car that is the most well-rounded and the easiest to drive, look in the direction of the i30 Active. 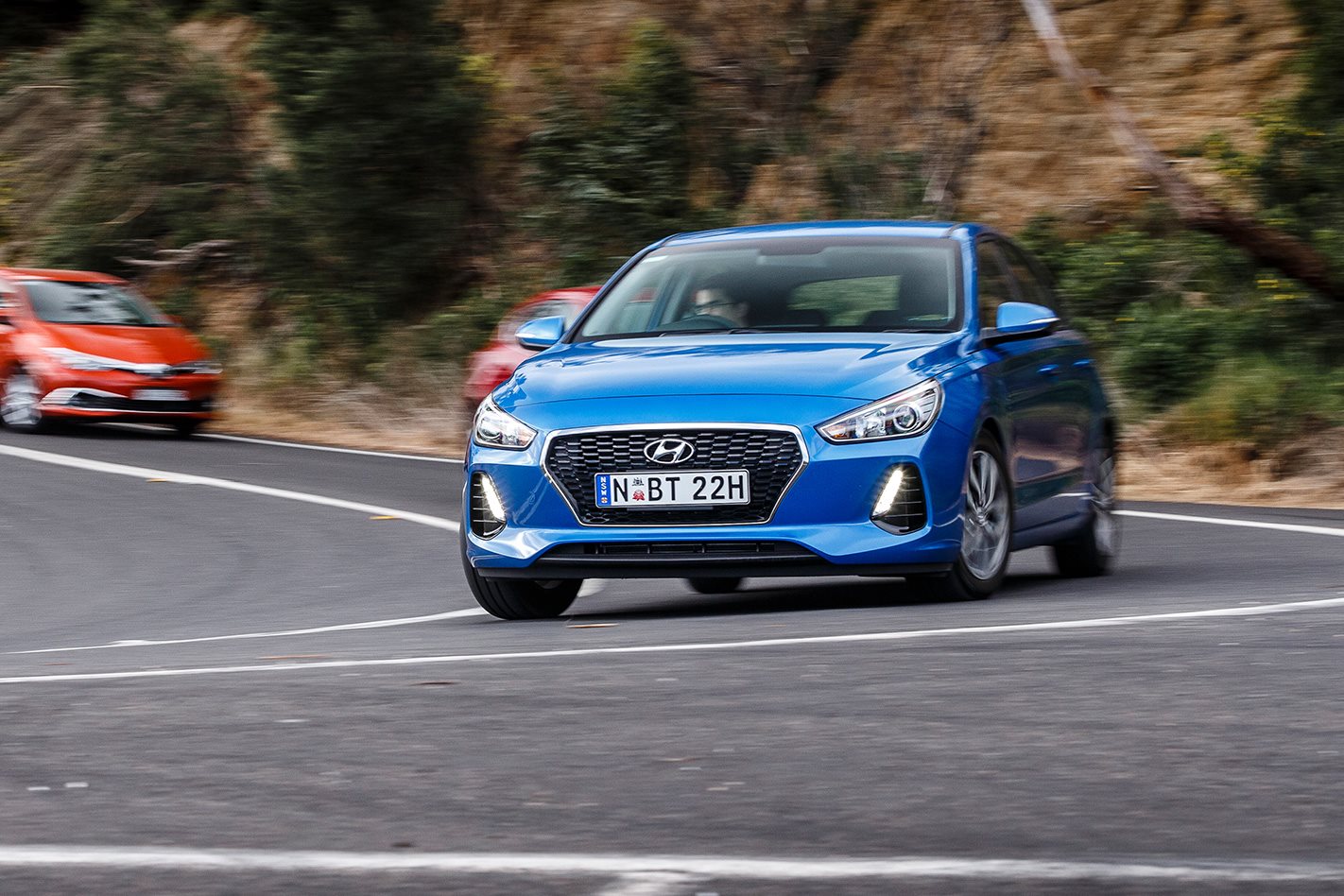 It may only have 3Nm more peak torque than the Mazda 3, but the i30 Active's two-litre engine feels like it delivers more twist earlier in the rev range, where it really matters to average motorists.

And that strong low-down urge is something the six-speed auto is eager to exploit, with a shift calibration that slips into tall gears as early as possible to keep the engine in the meat of its torque band – and keep fuel use down at the same time. 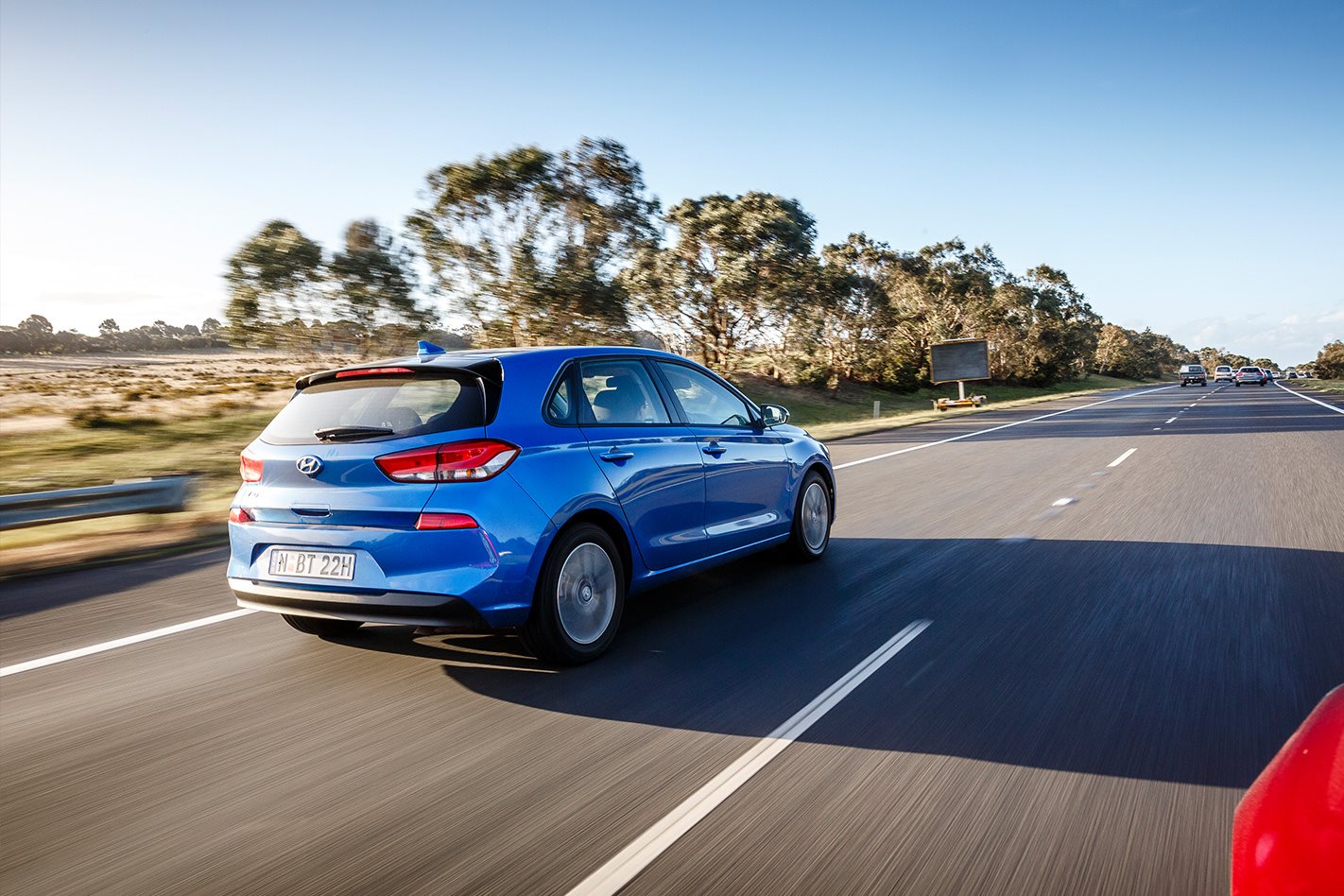 Its as-tested fuel consumption of 9.2L/100km couldn't touch the start-stop equipped Mazda 3's impressive 8.2L/100km fuel burn, but it was considerably better than the Corolla's 9.6L/100km figure. It's curious that the Corolla, the car with the least powerful engine and a transmission type that, in theory, should be the most efficient, was soundly beaten by the heaviest and most powerful vehicle in the group - the Hyundai.

It's not just powertrain supremacy that elevates the Hyundai. Its ride and handling offered the best compromise between ride and comfort, with some firmness at low speed giving way to a plusher ride at highway velocities. Even though its sidewalls are slightly shorter than the Mazda's, the i30 exhibited greater pliancy over big hits. Hyundai makes a lot of noise about its locally-developed suspension calibrations, but it's not just marketing spiel – the i30 has been adapted to Australian roads remarkably well. 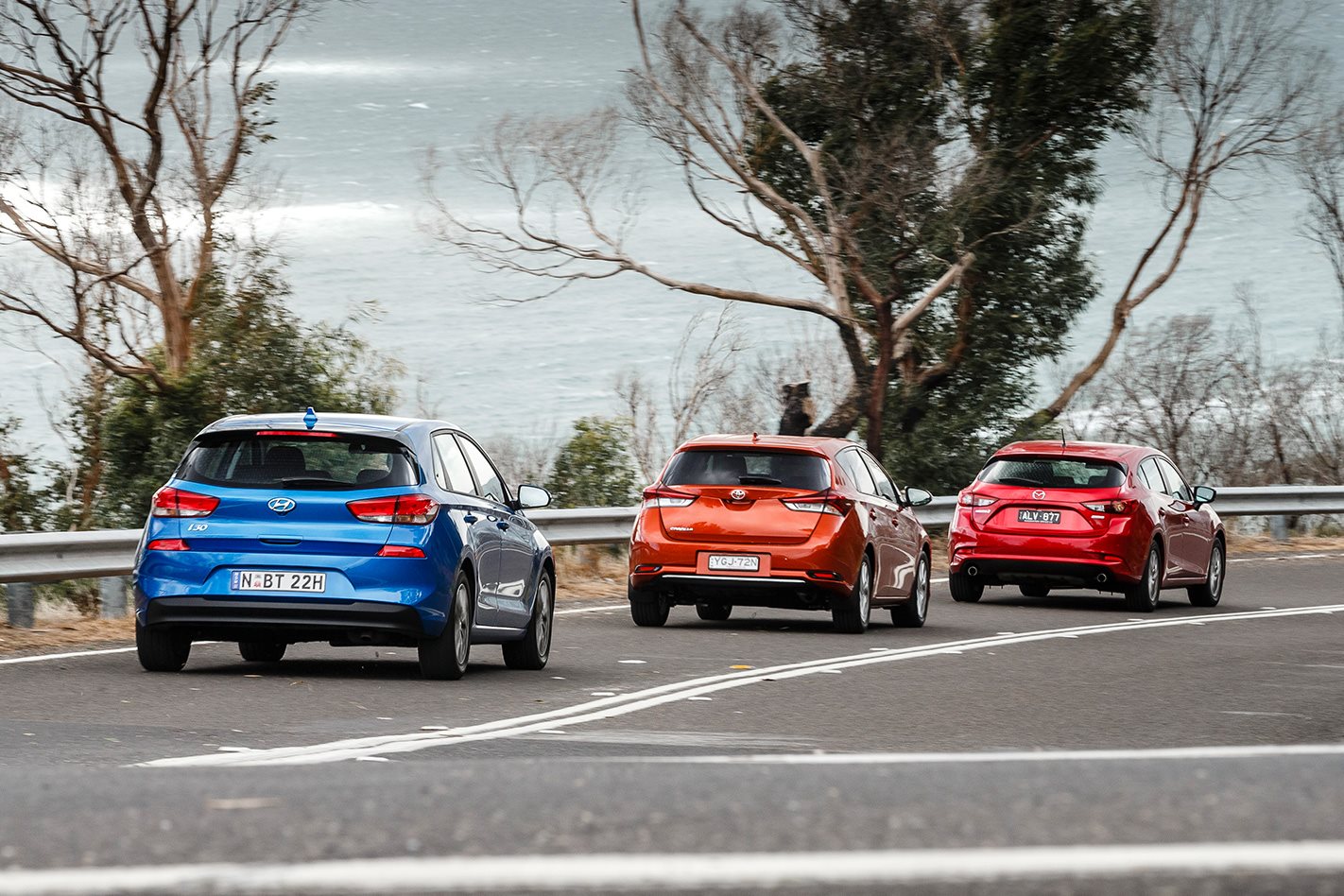 The Korean contender also delivered a surprise in the form of excellent steering, with progressive weighting, excellent on-centre accuracy (something Korean electric power steering systems have traditionally struggled with) and zero rack rattle. Where the i30 Active loses out is with its primitive torsion beam rear axle, which during hard driving doesn't feel quite as confident and surefooted as the more sophisticated multi-link rear suspension of the Mazda 3.

The absence of autonomous emergency braking on the i30 Active's spec list is hard to ignore, however, especially as it's the volume-selling grade. Its bare urethane steering wheel may also have some owners cursing they didn't spend more on the up-spec SR as well, which not only has leather on the rim but also brings AEB, a multi-link rear end AND a zesty 1.6-litre turbo. There's a much wider gulf in specification between the base i30 and higher-grade petrols than there is in other small car line-ups, and that's probably the Active's greatest drawback.

But even so, when judged against its direct peers it's the Hyundai i30 Active that's the best of the volume-sellers. The Mazda 3 is a close second, but unfortunately for Toyota the days of the “Corolla is best” mantra are fading into distant memory. 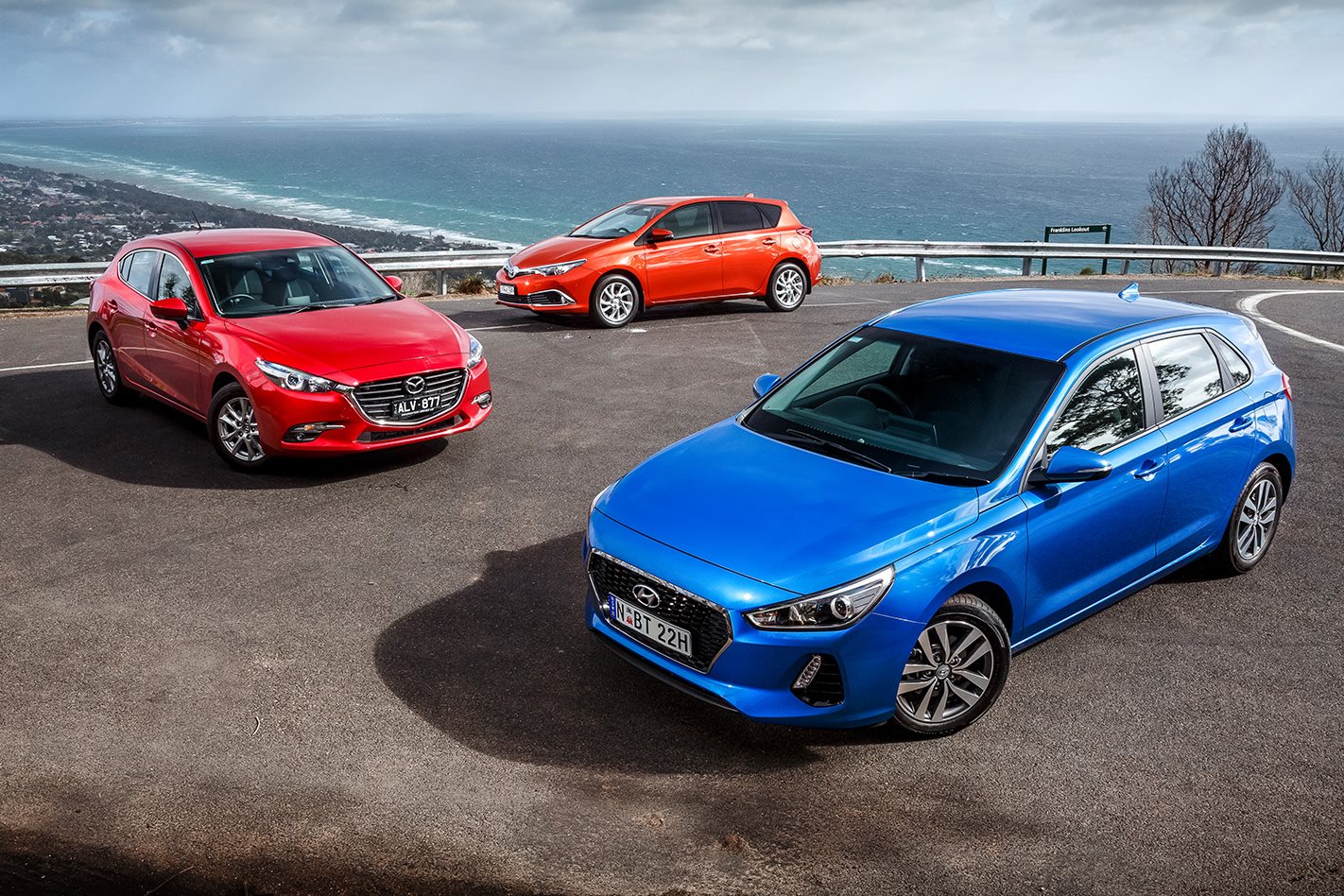