THERE are plenty of dedicated fourbie owners who can point to their fathers as the men who first took them out on short adventures, and Brett Ashlin is no exception.

But when it came time to slide behind the wheel of his very own piece of the action, like many young blokes, Brett’s passion was for fast and furious performance cars. Right up until about seven years ago when he finally succumbed to the constant nagging from a good mate to come out and experience the enjoyment of driving on the dunes at Alkimos in Western Australia. At first he wasn’t sure what all the fuss was about, but Brett soon realised sand-drifting was way more fun than a black-top slide.

Within five years, Brett was already amassing a great deal of knowledge through the tradition of buy it, build it and drive it. Having explored the impressive capability of the mighty GQ, owning two just to be sure, Brett upped the ante and landed a neat and tidy factory GU Patrol TD42T ute. With some slick custom barwork from his best mate Tim Bryant, it was transformed from beaut to beast and generated a lot of interest when first posted online. Brett had some serious fun and learnt a lot with the big Nissans. This was highlighted by just how lucky he was with his partner, Jodie, who not only put up with constant rebuilds, but also lent a hand with the modifications. She also happily jumps behind the wheel to enjoy an off-road drive.

In fact, that’s probably why Brett loves four-wheel driving so much – he can get away from a busy life and have an adventure with mates or with Jodie and their two furry kids, Kota and Kaiser. And Brett’s no fair-weather, perfect-day-out fanatic, either. He knows only too well that breakages and bogging are never intended, but are inevitable if you’re doing a lot of 4WDing. Being prepared for anything is what’s most important.

Overcoming a tough challenge can be the biggest kick of all. Like when they were exploring near Albany with a couple of mates on board and decided to check out Dingo Beach.

“It would have to be one of the hardest beaches I have ever had to come off. I couldn’t describe the sand there, it almost felt like driving on jelly going up a sand dune,” Brett said.

After a couple of tries, and with tyres down to 8psi and both diffs locked, it was time for Jodie to take the wheel, while Brett took 40 metres of winch rope and the ground anchor up to the top of the hill. Already feeling pretty good with the safe solo recovery, they came across a ranger who warned them to stay clear of Dingo Beach, as cars were known to get stuck down there for days until a rescue team could come drag them up.

Brett was rightly proud: “Safe to say I was very chuffed with myself and the vehicle I built – I think being capable of performing a safe self-recovery in a competent vehicle is the key to a great four-wheel drive and an enjoyable trip!” And it was a long way from Brett’s worst day 4WDing, when he devastatingly put his first fourbie, the old GQ, on its roof. 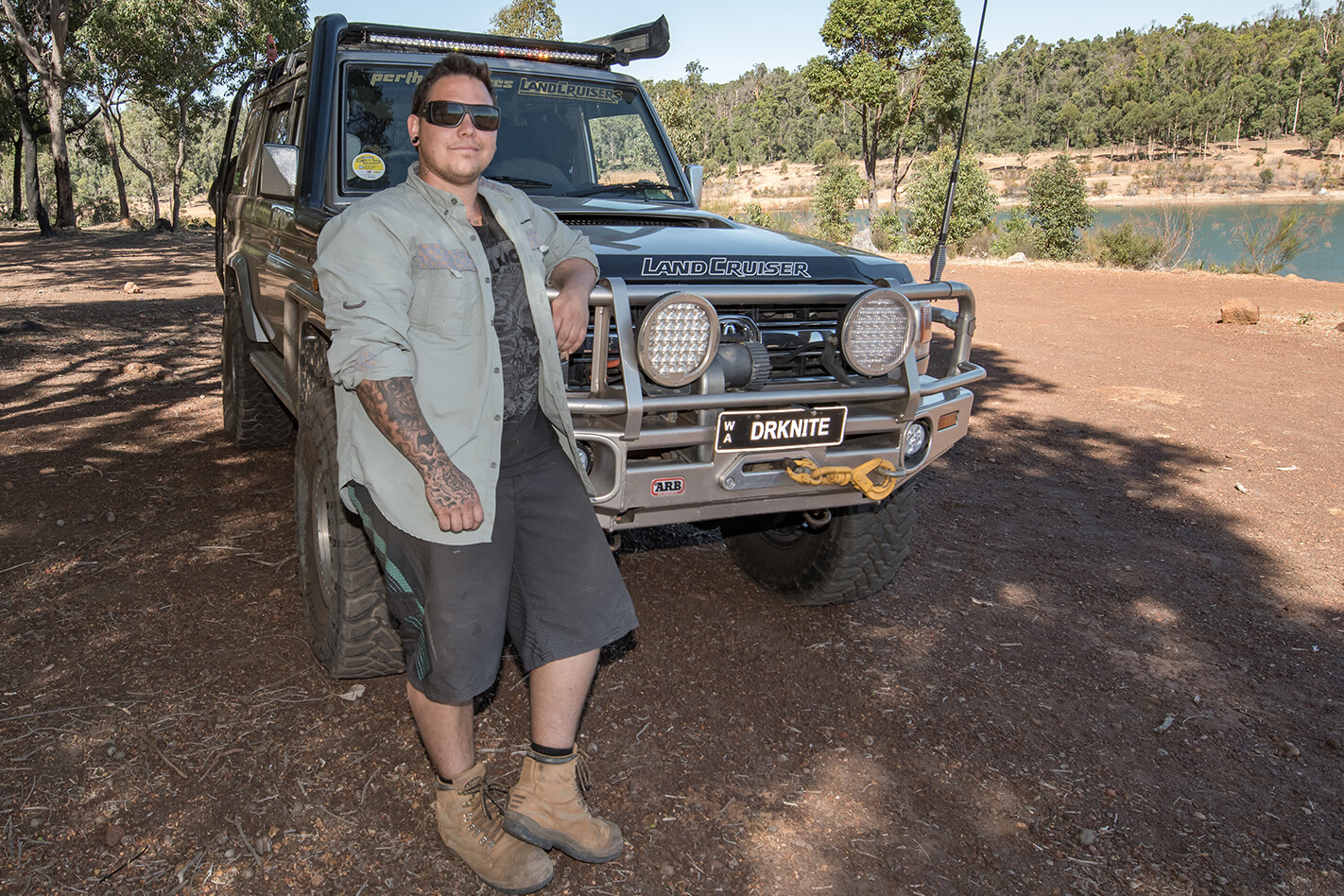 In late 2015, Brett departed the Nissan camp and headed east to Queensland to check out a pristine 2008 Toyota Land Cruiser 76 Series GXL V8. It was a match made in heaven, and Brett got to know his new girl on a six-day speed-date drive home to Western Australia with mate, Tim. She was fairly stock, with just ARB colour-coded barwork and some spotties. Since then, Brett’s been very busy indeed. With a willing hand or two from Jodie, the 76 Series has been racked and stacked for off-road adventuring and is now a formidable package.

Brett is lucky – he doesn’t need to use his toy as a daily driver and so has a bit more flexibility in what mods he carries out. He enjoys weekend camping through to hardcore four-wheeling, but ideally his fourbie needed to be set up for touring, and that was the main focus of the build.

Brett loves the factory diff locks that have got him out of plenty of sticky situations and truly did their best to get him off that beach in Albany. And, despite the lack of essential factory cup holders in his 2008 model, Brett prefers the style of the old-school dash – everything else was up for improvement.

That nice ARB barwork that was already fitted was not exempt from tweaking. A simple first job was to mount the essential night eyes in the form of HID Projector headlights. Brett then cut down the middle of the bar’s centre section and it was removed in order to fit an 8mm plate with gusset supports for the Warn high-mount winch.

Brett has transferred the winch across three vehicles. “It’s never let me down, and with a motor upgrade and a few other little mods it’s proven to be a very reliable asset – along with the Warn XD9000 winch and a serious ground anchor, both mounted on the custom twin-wheel rear winch bar from XLR8 Fabrications,” he said.

Brett has been really happy with the DPU performance module custom-tuned by Brent O’Keefe at Diesel Torque WA. He reckons it has “unleashed the animal within” – I think he meant the animal within the 4.5-litre V8, but given Brett’s been involved in a few Cross Country Drivers Association off-road racing events as a navigator, plus taken part in local WA comps like the Pirtek WA Extreme Challenges and Perth Offroad Promotions Rocks and Ruts, maybe he wasn’t just talking about the Cruiser. 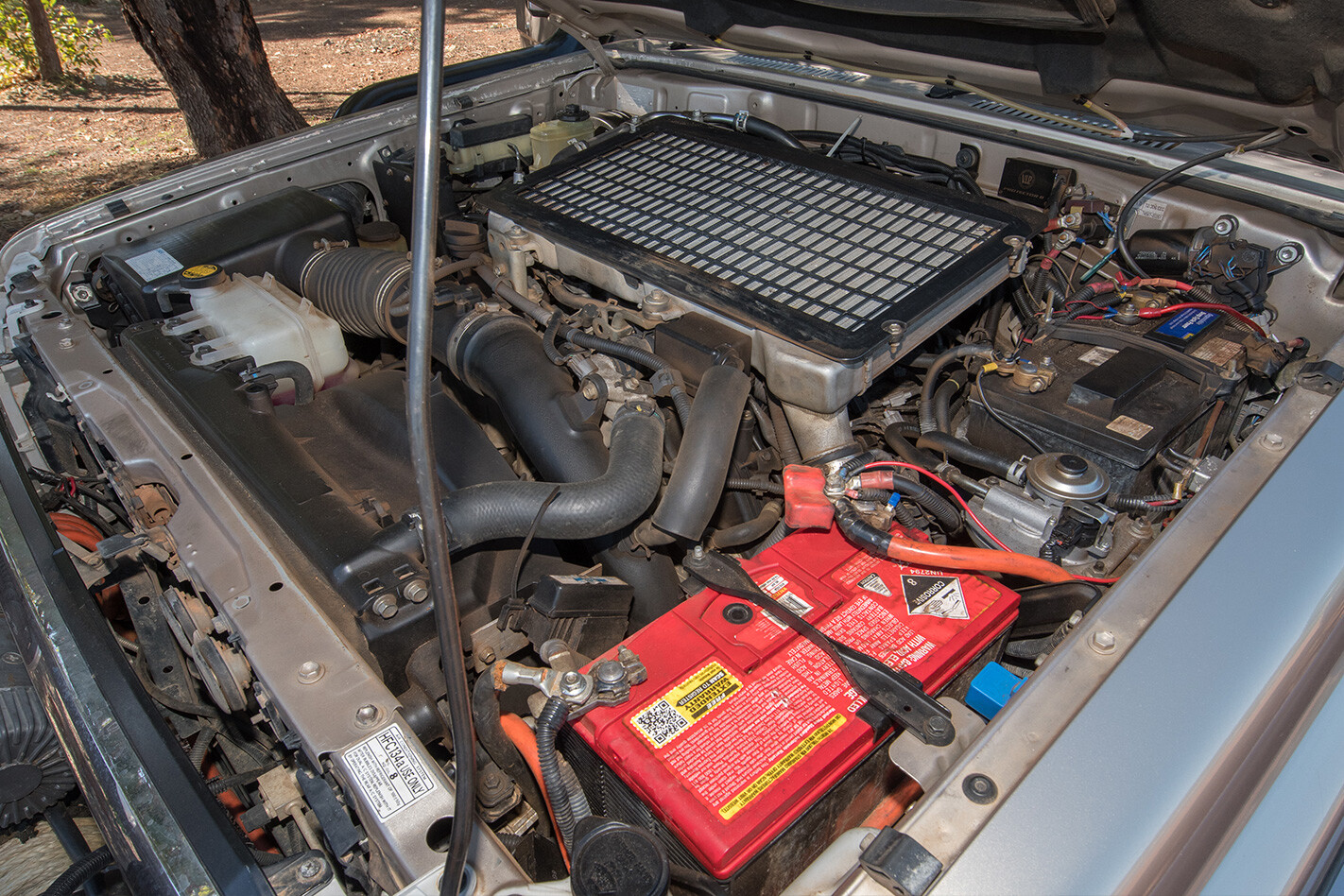 Brett’s more focused now on reliability than outright performance, so the module is nicely tuned to help out when towing the camper trailer to locations like Warroora Station just south of Coral Bay. His Christmas trip covered a full Warroora Station exploration, plus he went to Ningaloo Station to check out the old whaling station and abandoned lighthouse. He then ventured to Exmouth for New Year’s Eve and finally crossed the Cape range. All in six days – Brett and Jodie don’t believe in wasting any time when they get away.

Brett is now happy with the overall performance of the big wagon, though he’s considering an upgrade from a three-inch to a four-inch exhaust (I foresee more performance tuning ahead, after all).

The Land Cruiser’s manual transmission is fitted with a no-nonsense NPC billet flywheel and an Exedy clutch rated for 1300Nm, which ensures all that engine power can be directed with purpose. An EFS three-inch suspension lift, extended shackles, Boss triple-bellow airbags and custom-made sway bar disconnects means all that power isn’t going to waste when off-road, either. “I’m really happy with the suspension – it suits my needs and is quite comfy, considering how tough leafs are I also get awesome travel out of the rear end,” Brett explained. We can vouch for that – check out those photos!

On the inside Brett hasn’t wasted a single nook or cranny, fitting everything from a turbo timer to an OBD scanner and a set of Redarc boost/EGT and twin volt gauges for the batteries. The dash-mounted pedal module helps out by adjusting throttle sensitivity, made handy when tackling rough terrain where controlling right-foot pressure is essential.

As well as custom drawers for all the recovery gear, including the highly utilised ARB air pump, there are pop-up panels to ensure all available space can have bits and bobs stuffed tidily away. The design allows Brett easy access to the fridge, plus there’s room for a swag down the side if he wants to get an early start on the salmon run. Without the need for the trusty ol’ girl to double as a family daily transport, Brett removed the false floor panels for extra space. He then fit insulating materials to the rear windows to keep the interior cool and assist the fridge in keeping its contents perfectly chilled.

The dual batteries with a Redarc controller are kept topped up when the vehicle is parked with the help of a 200W solar panel positioned on the Kut Snake roof rack.

A quick pullover is made comfortable with a rapid pull-out awning, and the Front Runner rear door table makes it easier to prep lunch while the portable barbecue sizzles. Add in an Outback roof console for the essential comms, a double DIN DVD player and a Hema HX-1 navigator on a custom-built mount, and there’s not much else to ask for to round out this package.

Brett’s happy with all his mods – if he wasn’t then he’d keep tinkering until they were right. While he’s built an awesome machine, he’s also proven that doing plenty of the work yourself makes using the end product more fun. Not to mention keeping the budget under control. He’s probably spent about $60K to date (including vehicle purchase), but he’s got a huge amount of bang for his buck, meaning that four-inch exhaust and air tanks may well be fitted in the not too distant future. All of this ought to make the Cruiser ready for a bucket list adventure, when Brett heads east to show the Victorian boys how a WA fourbie takes on the High Country snow.