Short of a Jeep-bodied monster truck, it’s pretty hard to think of a more comprehensively modified Wrangler than the metallic-green one you’re looking at right now.

Oh sure, it started life as a 2008 Wrangler Unlimited but, as you can probably see, it’s now a whole lot more than that. In fact, there hasn’t been one aspect of the rig that hasn’t been fiddled with or outright re-engineered; not a single system that hasn’t been refined or replaced in the name of showing nature who’s boss.

And don’t go thinking that it’s some kind of trophy-hunting bitumen queen. Cos it ain’t. Its owner and creator, Melbourne-based Andrew Speedie (top name for a car guy), drives the Wrangler just as Jeep intended. “It’s not a daily-driver, but we get it out on plenty of weekends,” Andrew says. “Mainly around the Victorian High Country and Toolangi and that area. It’s done 72,000km and I’ve owned it from new. I’m not one for screaming through bog holes and getting it caked in mud and whatever; I’m more into the technical type of track.”

Mind you, it wouldn’t really matter what Andrew pointed the Jeep at, the thing is so heavily adapted to off-road life that it’d probably just chug over the top of anything silly or slow enough to get in its way.

So where do we start with the mods? Okay, let’s try the driveline. Andrew has turned his back on the traditional V8 heart transplant argument, and has instead gone down the forced induction track, retaining the 3.8-litre V6 but bolting a dirty great Magnuson supercharger to it. The TVS1320 blower is a twin-screw type of blower and pumps through a water-to-air intercooler after drawing from a snorkel set-up. It takes its instructions from a custom VCM tune for the on-board brain that has neatly got around the usual tuning problems of poor idling, rough running and the check-engine light flashing up on the dashboard. Long-tube headers help the V6 breathe out just as the blower helps it breathe in.

A conservative 6psi of boost and the 3.8 V6’s inherent strength and durability have meant that the engine has never been opened, and this, Andrew reckons, is probably the only area of the vehicle that remains stock. But with a healthy 40-plus per cent hike in power and torque at the wheels, the huffed-upon V6 gets things moving pretty well.

“The thing for me is not necessarily the power,” he says. “It’s the torque. It sails up the road, even though – look at it – it’s a brick.” Backing up the huff and puff is a Jeep four-speed auto and transfer-case, but they’ve been joined by a Rubicrawler reduction box for true crawler gears and the ability to select, say, low-low-range two-wheel drive. US specialist Rugged Ridge supplied the beefed-up driveshafts and there’s also a bigger aftermarket tranny cooler.

Continuing the theme of eliminating any weak link in the powertrain, Andrew specified a pair of Dana 44 diffs with Eaton locker centres and 5.13:1 final-drive ratios. And with tall 37.0-inch Nitto Trail Grapplers on Pro Comp Xtreme alloy wheels, you can see the sense in that. “You hear of guys who run big tyres and supercharged engines but don’t change the diff ratio,” Andrew explains. “So what they’re really doing is using the blower to offset the tyres.”

It makes perfect sense, too, and lowering the final drive to bring the revs-to-road speed ratio back to more or less stock has meant that all that extra power and torque can be used to slingshot the Wrangler up hills and out of holes rather than simply compensate for the huge rolling diameter – and, therefore, much taller gearing – of a set of 37-inchers. So what else is going on here? Well, the Jeep suspension was flung into the nearest bin and replaced with aftermarket gear with higher steering mounts to cope with the three-and-a-half inch lift (which actually looks more than that).

Synergy springs are fitted and there’s a pair of Fox remote-reservoir shocks at each corner, too. US specialist TeraFlex supplied the brake rotors at each corner and there are four-pot calipers up front. Andrew is considering a rear caliper upgrade, but for the moment the stock Wrangler rear grabbers do just fine. 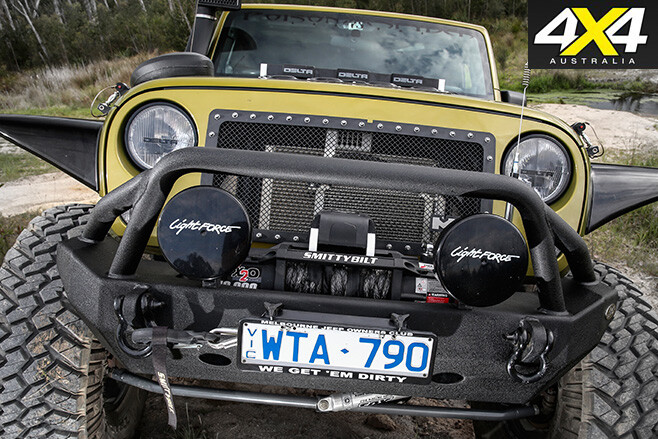 On the off-chance that the Wrangler meets the insurmountable, there’s a 12,000-pound Smittybilt winch mounted on a compact front bar and tough, metal body protection is bolted to the corners of the vehicle, along the rockers and underneath in the form of bash plates. Wider aftermarket guards keep the tyres out of the rain and the paintwork is still brilliant, despite many of those 72,000km on the odometer being in the bush.

Inside, the attention to detail continues. Extra gauges are a cinch for something with so much extra poke, and the dual battery monitor is mounted prominently, too.

Corbeau buckets fill the front half and Andrew reckons the rear seat is on borrowed time. It won’t, however, be replaced with a new pew; instead he’ll turn the seat area into secure compartments for a fridge and other outback necessities. 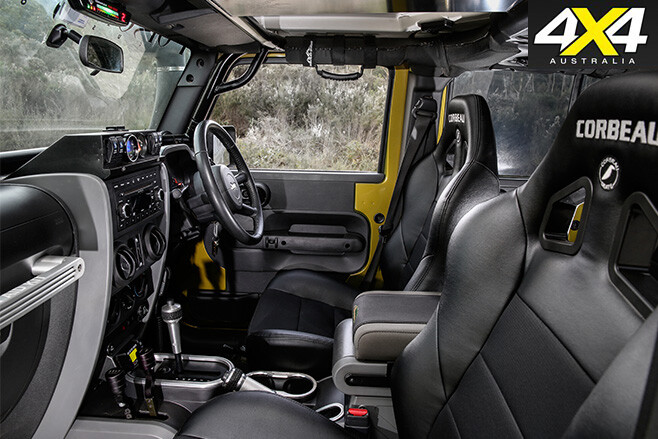 Swing open the tailgate and you’ll find a fold-out table at the ready, along with a solid cargo blind that is also lockable, giving a secure space to stash valuables even when the removable hard-top is at home in the garage. There’s also a huge bank of Anderson plugs, while the second battery lives under the floor in the cargo area. Very neat, very effective.

Probably the major interior addition is the sports cage that mounts in multiple places to the Jeep’s floorpan and structure, offering not just roll-over protection, but extra rigidity; handy, since Andrew admits he likes the vehicle best when the roof is off. The Poison Spyder-manufactured cage is padded, beautifully made and even mounts a pair of speakers for the stereo. You could look at this car and presume Andrew grabbed a catalogue and ticked every box on every page before hammering his credit card into submission. And, of course, there is a financial price to be paid for this high level of modification.

Andrew plays the dollar-question pretty close to his chest, but it’s clear that he has spent more on modifications and accessories than it costs to buy the vehicle new. Obviously, that more than likely tips it over the $100,000 mark, but unlike many vehicles you can actually see where the cash has gone. 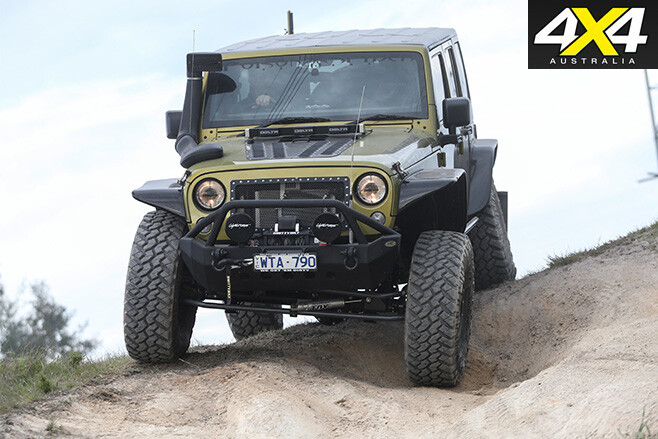 In fact, look really closely and you can see the attention to detail is quite incredible, suggesting that plenty of planning went into the mods. More than that, every piece works properly with the one it’s bolted to, and the Wrangler emerges as a high-end collection of well-considered bits and pieces. That, in turn, makes it more than the sum of its parts.

And when you look at the list of those parts, that’s really saying something.