For Michael Dobele, cruising through the great outdoors in his modified Jeep Cherokee is a welcome change of scenery from his office job.

This article was originally published in the April 2014 issue of 4x4 Australia.

“I got my early experience with off road driving in Byfield National Park and Five Rocks,” the Rockhampton-raised Brisneylander said.

“It’s a really nice area. As teenagers, some weekends we’d pack up our crappy little 4x4s and go camping. I had a couple of mates with Suzukis — really early ones! They were little buzz boxes but we took them anywhere. I think back and we did things with those vehicles that you wouldn’t dream of doing now. But that’s how it is when you’re 21.”

His first 4x4 was a Jeep Wrangler, “I used to own a 2000 model TJ Wrangler. I had that for a couple of years. I didn’t do too much with it, just a bit of beach-work and that was about it. 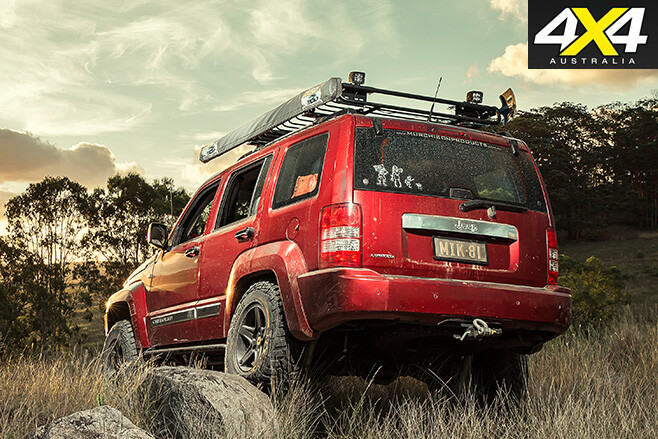 “Then I did the family thing — got married, had kids — and I needed a house deposit.”

So the Jeep was sold, and the 4x4 dream was put on hold until finances settled. But before too long, the search was on for another Wrangler — or perhaps a Cherokee wagon.

“It was December 2011 and there was a run-out deal because they were discontinuing the Cherokee. The prices had been slashed and there were ridiculously good deals! But, if I was to get one, it had to be my daily driver, fit the family for camping trips and also be a bit of fun for weekends away with mates,” Michael said.

So he bought a Jeep! Cherry Red, carrying a 3.7-litre petrol V6 mated to a four-speed auto. It didn’t take long for Michael to begin modifications to enhance the Cherokee’s off road ability. 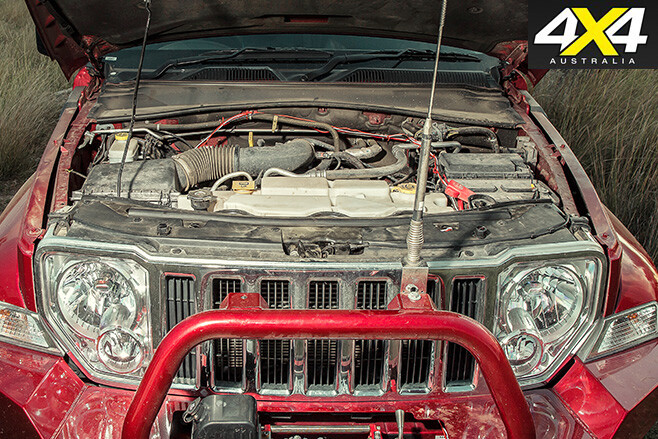 “I knew the suspension in these was wallowy and I wanted to lift it for better ground clearance. They are quite low. So that was always going to happen,” he said.

“When I first had it, it was sitting right at the top of its stroke. But that was before any of the extra equipment went on. Now, with the extra weight, it’s far more comfortable,” Michael said of the Lovells suspension kit that went under the Jeep to raise and stiffen the suspension.

Michael’s next challenge was replacing the Jeep’s standard 18-inch wheels and tyres with more off road focused hoops. 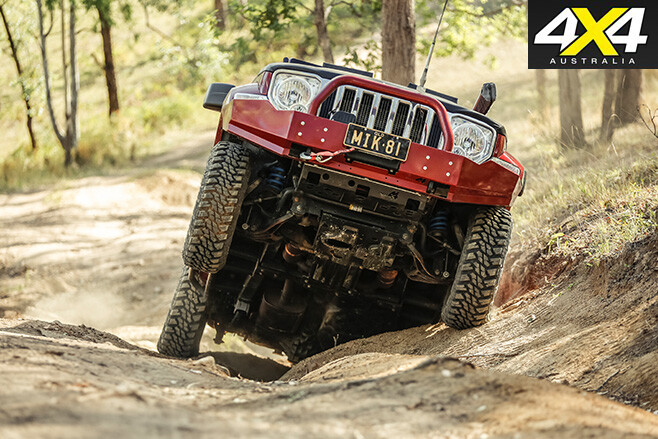 “I had to ditch those low-profile 18s! They were useless for anything off road. I had to do some shopping around for some decent 16-inchers. I could have fitted cheap steelies, but I wanted something that looked good.”

The Jeep doesn’t have the same stud pattern as most Japanese or Thai 4x4s (6-studders) so the range of off-the-shelf wheels differs for the Jeep — and other 4WDs such as a Hilux, D-Max or Tritons. But Michael got lucky — he was offered a set of old-stock 16x8-inch AEV Bridgers by Murchison Products which are now powder-coated black.

“They’re a great looking wheel and the offset is perfect.

“They pack out the stance perfectly — right to the edge of the wheel-arches.” The tyres he used are 245/75/16 Summit Mud Hogs, replacing the original Bridgestones. 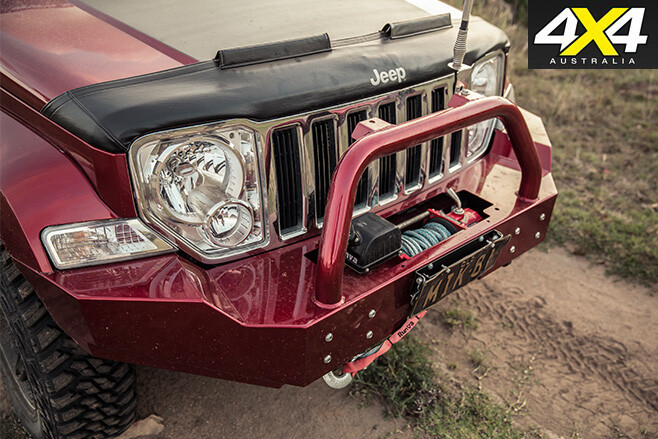 The sill-mounted rock sliders were next to go on. Built by APT Fabrication, they’ve been a good investment. “Those things have saved my arse! They’re probably the best equipment I have bought. We removed the Jeep’s standard plastic sill caps to tuck them up higher as I didn’t want to lose any ground clearance,” he said.

With no ‘off-the-shelf’ front bar available for the KK Cherokee from the main 4x4 accessories stores, Michael enlisted the help of a specialist, Melbourne’s Uneek 4x4, for a special-build item. Wanting to make 10 bull bars for customers, it took Uneek 4x4 close to nine months to design and prototype the bar. The beautifully colour-coded result, including recovery points and provision for the synthetic-wrapped 11,000lb Runva winch, was worth the wait. 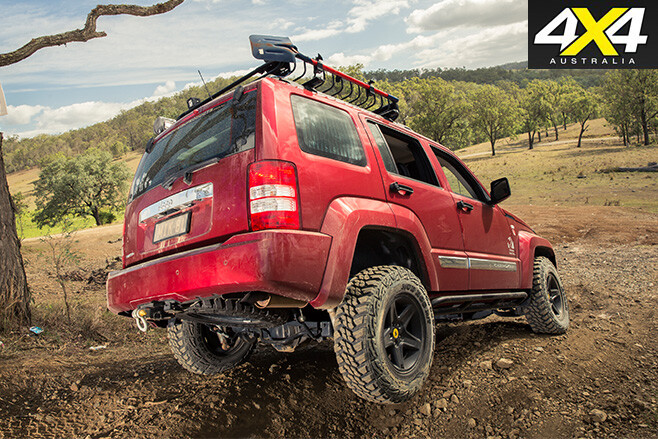 “Even though they’re not expensive, I kept putting off spending the money to buy them. But one day off road I damaged a front axle shaft.

“That cost me $1500 to fix and wouldn’t have happened if I’d got off my arse and just spent the $300 on the under-body protection.”

Inside, Michael installed a Uniden radio with the controls on the hand-set to save space as well as a 12V accessory socket in the back. Due to limited interior space, Michael decided on Yakima roof racks which fit the width and length of the Jeep and also has a roll-out awning to keep the sun off the kids Chase and Mia, on those sunny day trips to the beach with wife Elissa. “I wanted a cage [edged] style rack and this one works well,” Michael said. Day to day, the well-equipped petrol automatic Jeep is a comfy daily driver and freeway cruiser, with a terrific basic layout, well-developed traction control and very capable off road capabilities thanks to Michael’s enhancements.

“Elissa loves camping but she’s not real keen on the actual off road driving,” Michael said.

“So we do day trips and simple weekends with the family. I’ll do more technical weekends away with mates or the Jeep club where we’ll go to a 4WD park. “We usually do a club trip once a month where we’ll go up to LandCruiser Park — good camping and good tracks there — or The Springs and Cityview.

“We’re quite spoiled up here in Queensland. We also get over to Moreton and Stradbroke and of course Fraser isn’t too far up the coast.”

Jeep falls behind when it comes to aftermarket equipment in Australia. Sure, there’s plenty of stuff available from the USA, but much of it (in particular front protection bars) is illegal in Australia because it doesn’t meet our safety standards.

The bar on the front of Michael’s KK was specially designed and built by Uneek 4x4 in Victoria after strong inquiry from local Jeep owners.

Uneek’s David Fitzpatrick explains, “A few blokes got together on an online forum, complaining that they couldn’t buy a bar for the Cherokee. So I said that if we could get 10 customers, we’d design and make a batch.”

With 12 deposits, Uneek committed to its first batch of 15 ADR-compliant and air-bag compatible front protection bars. For more info check out the Uneek 4x4 website.