RANGE Rovers are divisive machines; some swear by them, others won’t touch ’em with a barge pole. For our mate Ben Sumbloke, there was no dilemma – buy a decent Rangie, then make it 10-foot tall and bulletproof.

“I’ve always loved Range Rovers,” Ben explains. “I had a 1976 short-wheelbase as my first car and never really looked back.”

He followed up his P76-powered shorty with an ’88 and an ’89, before moving up to the 1993 long-wheelbase LSE you see here. “There were only 150 of these sold in Australia, so they’re hard to find and very sought-after.” 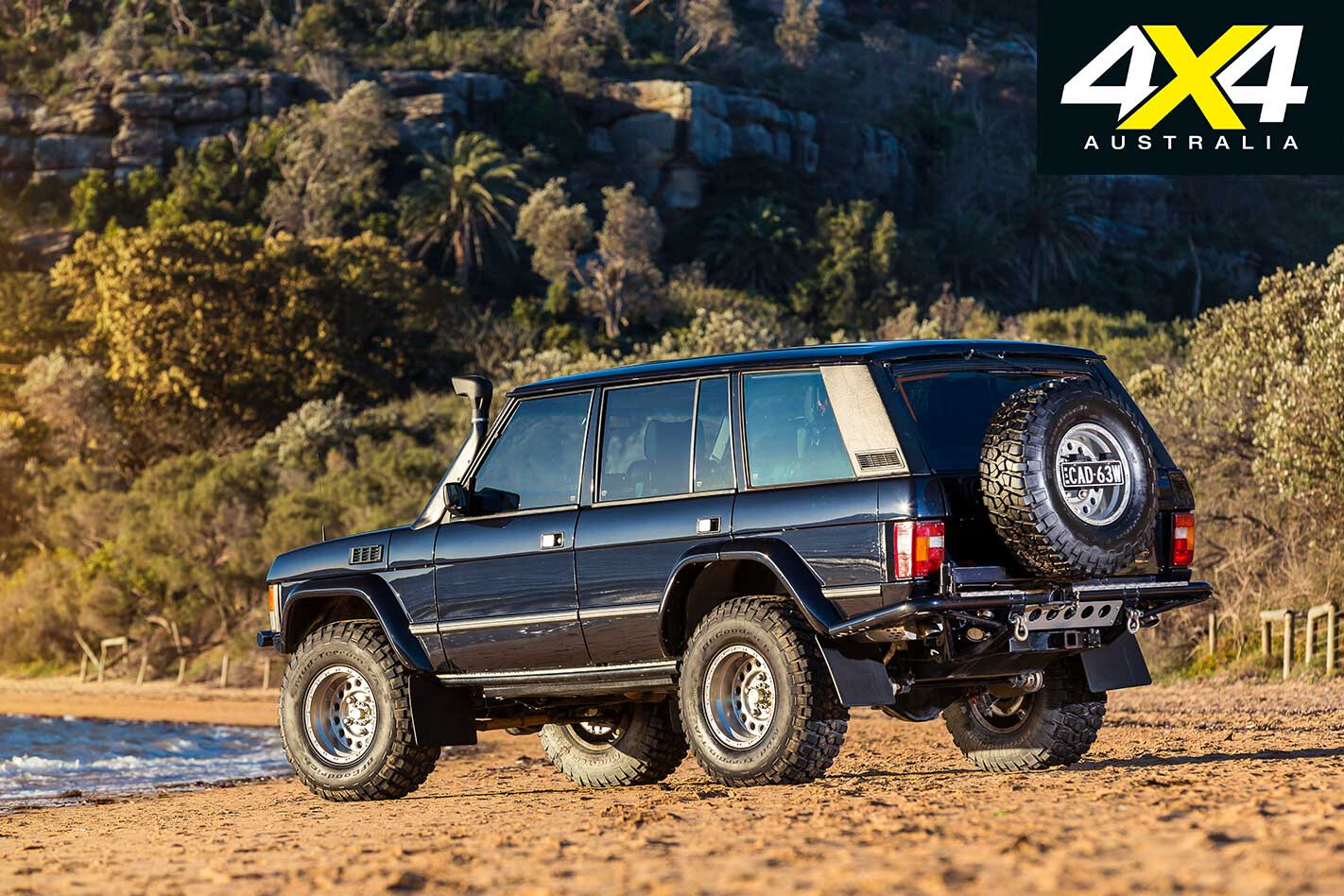 Having said that, Ben didn’t pay drug money for it: “I offered the seller something stupidly low which they rejected; then made another offer slightly less stupidly low and they let me have it,” he laughs.

While the Range Rover hadn’t copped much abuse or ill-conceived alterations when he bought it, that didn’t stop Ben shipping the car directly to Les Richmond Automotive (LRA) in Melbourne for its hardcore ‘Firestorm’ build.

“Some guys take their cars to LRA for an engine conversion or suspension upgrade, but the ‘Storm Series’ cars are fully re-engineered from the ground up,” says Ben. “That being said, I may have gone a bit crazy.”

And crazy Ben did go. 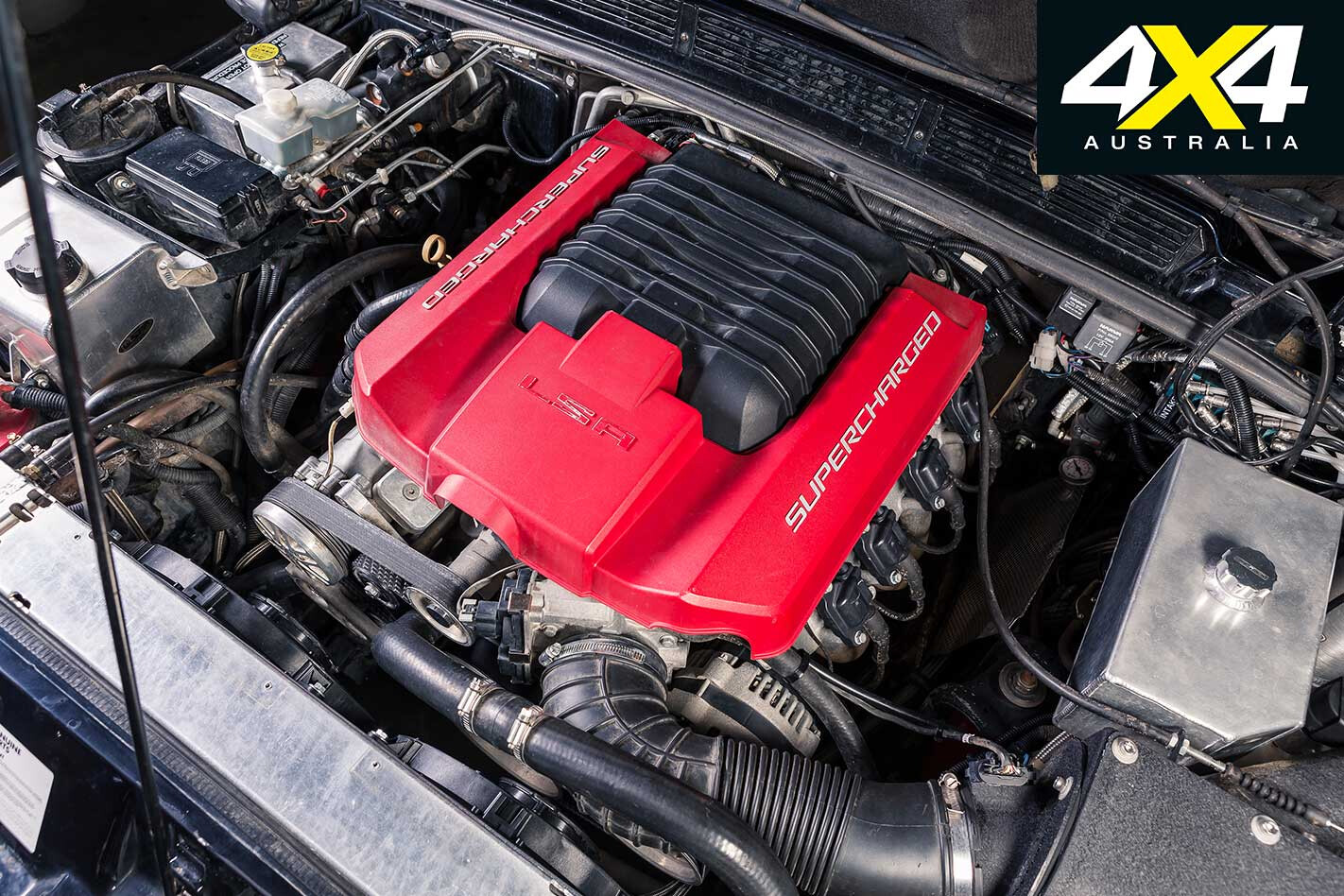 LRA’s regular Firestorm features an amazing amount of kit, including an LS V8 conversion for serious off-roading adventures, but Ben was among the first to go with the heavy-hitting LSA supercharged V8.

Normally reserved for the Camaro ZL-1, Cadillac CTS-V, or late-model HSVs, the 6.2-litre Gen IV LSA is a Caddy-spec unit good for 556 horses out of the crate, which is almost three times that of the stock Rangie V8.

LRA has been developing and modifying Rangies for decades, so Ben’s desire for all those horses came as a welcome challenge. Andrew Richmond was the main contact on the build, liaising with Ben on every aspect, from the body to the suspension, paint, interior and the install of that mighty blown motor. “I was the most annoying customer ever,” admits Ben. “I’d be researching stuff, then changing things up as it went along; some things worked and others didn’t, however LRA was always respectful of my vision.”

The changes Ben suggested en route sought to elevate the build rather than cut corners for cost or convenience. “I figured that if I was going to do it, I would do it once and do it right!” A sound philosophy and one that saw this Classic Series Range Rover go from mild to absolutely wild.

Included in the ‘regular’ LRA Firestorm upgrade is the removal of the body for a full chassis overhaul. The front-end is strengthened and the rear coil towers extended to allow for taller springs. Shock and body mounts are also raised, but Ben went a step further chasing perfection. 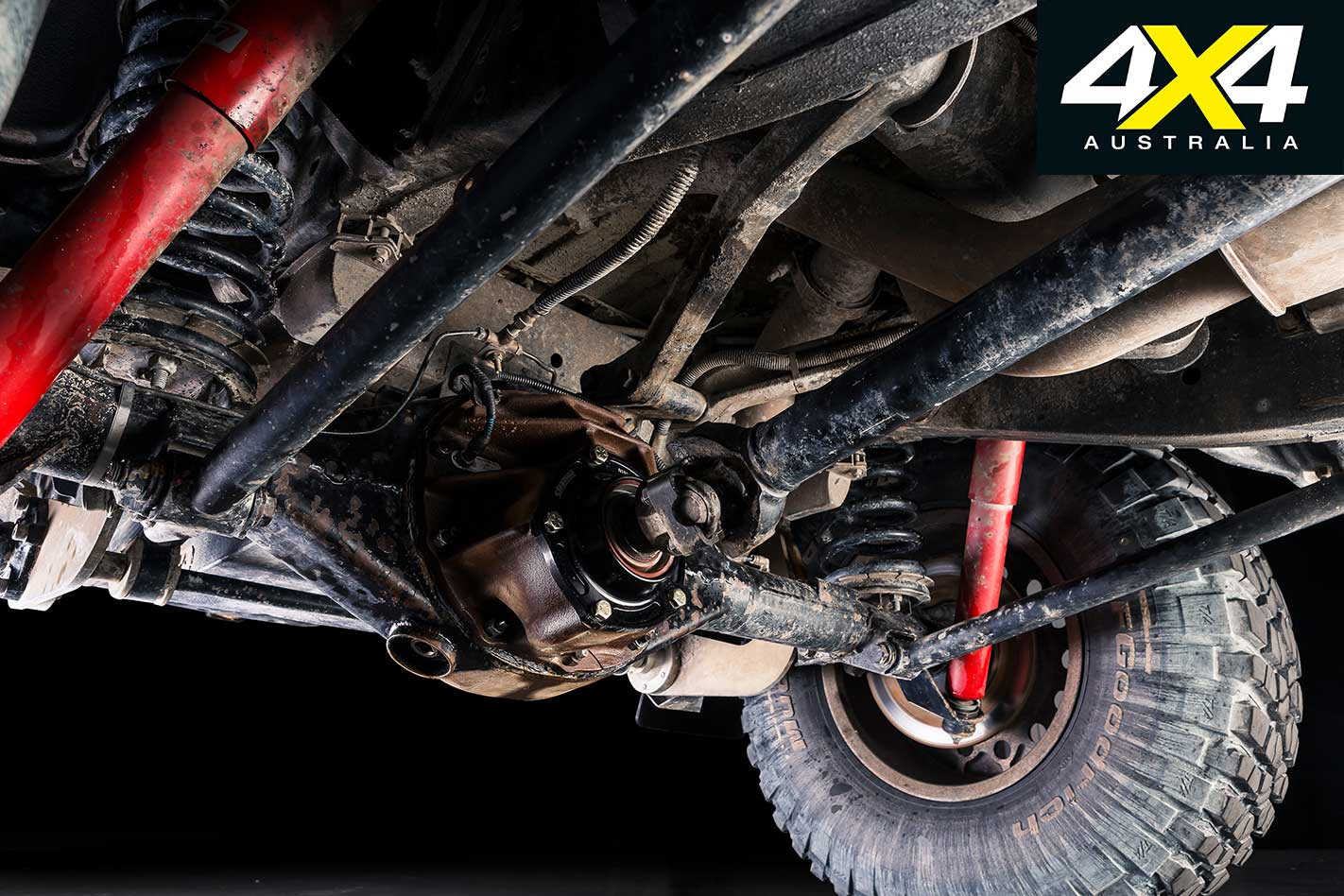 “When you’re off-road, you don’t want swaybars; they prevent your axles from getting full articulation,” he explains. “But on the road, you want them back or they drive like boats.”

For many fourby owners this means getting out and laying in the mud to disconnect the swaybars, but Ben’s desire to combine civil on-road manners with brutally effective off-road performance required a bespoke solution. “LRA built a pair of swaybars from scratch, much like torsion bars, and fitted a pair of Nissan free-wheeling hubs to the ends,” he says.

Powered by compressed air they disconnect and reconnect at the press of a button. In fact, the onboard compressor powers several systems, including the front and rear diff lockers and high/low range selector, all selectable from a custom control panel in the centre console. The panel also houses a button to engage the Ashcroft centre differential, which replaces the original viscous coupling.

“The Ashcroft has automatic torque biasing; it does the same thing the old coupling used to do, except it’s bulletproof. It locks up when you lose traction, but you can manually lock it, too,” Ben says. “With these LS builds, it’s really important to still have an automatic lock; you need it to deliver the power to both axles when you lose grip, which happens pretty frequently.”

As brutal as all this sounds, Ben’s LSA Range Rover is also civilised. The genuine walnut dash and door inserts remain, and LRA recarpeted the floor and retrimmed the original seats in leather.

“They’re just beautiful seats in the first place; there was no need to replace them,” Ben raves. “You can’t describe a Range Rover until you’ve driven one; the ‘command’ seating position looking over the bonnet is just perfect for a tall bloke like me.” 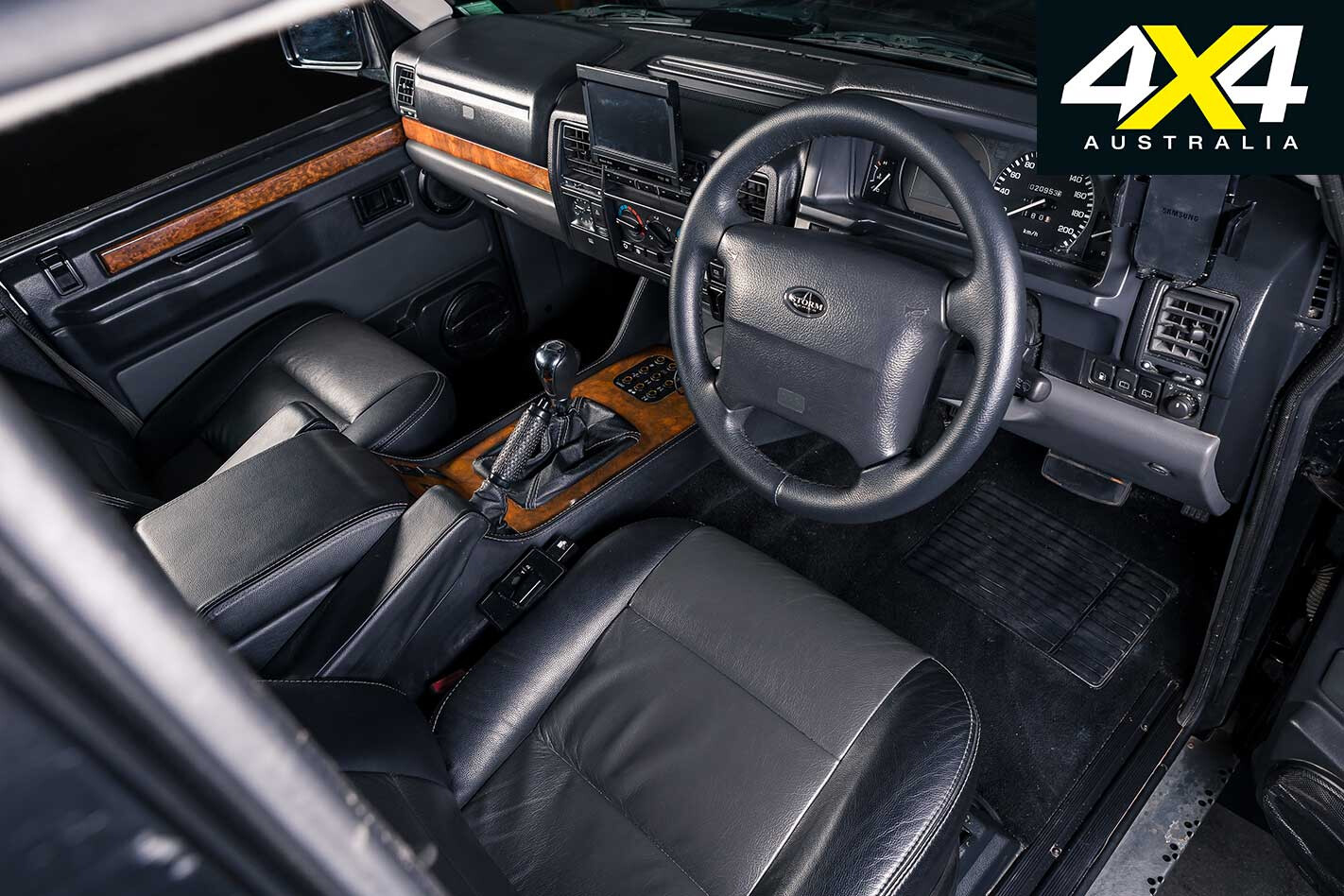 Of course, no decent four-wheel drive would be complete without a rear fitout, and Ben’s is no exception. “I emailed LRA with a sketch of what I was after: drawers; fridge slide; food-grade 50-litre water bladder; and space for an amp, sub and three different storage areas.” The boys surpassed Ben’s expectations, trimming it up and properly utilising the space available.

You can see from the pics that this Range Rover is no show pony; it’s built for off-roading and that’s what it does. “It’s the places you can get to that just make this car so awesome: the Victorian High Country, Fraser Island, stuff like that,” advises Ben. “That’s why I did it; so my wife and I can get there in comfort, go hardcore four-wheel-driving, and then get home okay.”

Thanks to the quality of the build Ben can do that any time he wants, but, equally, he doesn’t look out of place rolling up to a nice hotel.

“It’s a really nice car to drive and I drive it as much as I can. Custom cars are never finished, but I’m really happy how it came together; the boys at LRA did such a great job.” Ben lets off a big sigh; it’s clear how he feels about the car. “And I love looking at it as much as driving it.” The Rangie presents a familiar shape; the ‘Classic’ series was in production from 1970 to 1996 after all, but Ben’s LRA Firestorm features some significant deviations from standard. Lift kit and bashbars aside, the Fat Boy flares completely alter the profile of the wheel arches and, along with the custom Eagle alloys and 315-section BFGoodrich Mud Terrain tyres, give it a stance missing from factory. Not only does the mighty LSA heart require some serious cooling, so does everything else. The custom radiator houses an integrated engine oil-cooler to the left and a trans-cooler to the right. There’s another trans-cooler in front along with the water-to-air intercooler, plus one more radiator underneath for the hydraulic system. Ben can stop the thermo fans from a button in the cabin; crucial for when you’re crossing a river. “A lot of four-wheel drivers froth over the manuals,” Ben tells us, “But having driven both, the auto is just so much smoother. After all, even the most hardcore off-roader still spends most of their time on-road!” A world-first adaptation featured on Ben’s Rangie is the working tap-shift. He, LRA and Overline Technology worked together to get it working on the 6L90E auto. “It even blips the throttle on downshift; it’s unreal,” Ben says! “We had a lot of issues with the gauges. We bought a loom from a firm in the USA who promised it would all hook-up and work, but nothing did,” says Ben. “In the end I found Overline Technology in Melbourne; they provided the screen and got the tap-shift function working for the 6L90E. The screen replaces the tacho and provides engine temp, trans temp, oil pressure and the intake temp. Overline even customised the colours and display.” As well as installing some monster mechanicals, Les Richmond Automotive handled the full body-off rebuild and respray. “The colour was a big decision; I was stalking car parks for months and kept seeing Carbon Black BMWs and loving them,” Ben says. “It’s one of the greatest automotive colours you can get; when the sun hits it, the blue pops right out.”

Ben did have reservations, but found a solution, “It’s probably not the most practical colour for a fourby, but it’s got a 3M clear wrap over it, so it’s not suffered too many scratches!”