WHEN YOU spend your weekends racing Ultra 4 buggies, UTVs and pre-running events like the Baja 1000, and your weekdays are spent building and wrenching on off-road racing vehicles, it should be no surprise that your personal ‘road rig’ has a heavy desert-racer influence. Such is the case of Cameron Chin of Nefarious Kustoms and his wicked-as-hell FJ45 Land Cruiser.

Like most off-road enthusiasts, Cameron has always had a soft spot for the classic Toyota Land Cruiser, but with all his time spent racing and working on race cars his own FJ40 was languishing at the back of his Las Vegas shop. The FJ was destined to be a rock crawler, but after a trip to Baja the project changed tack. 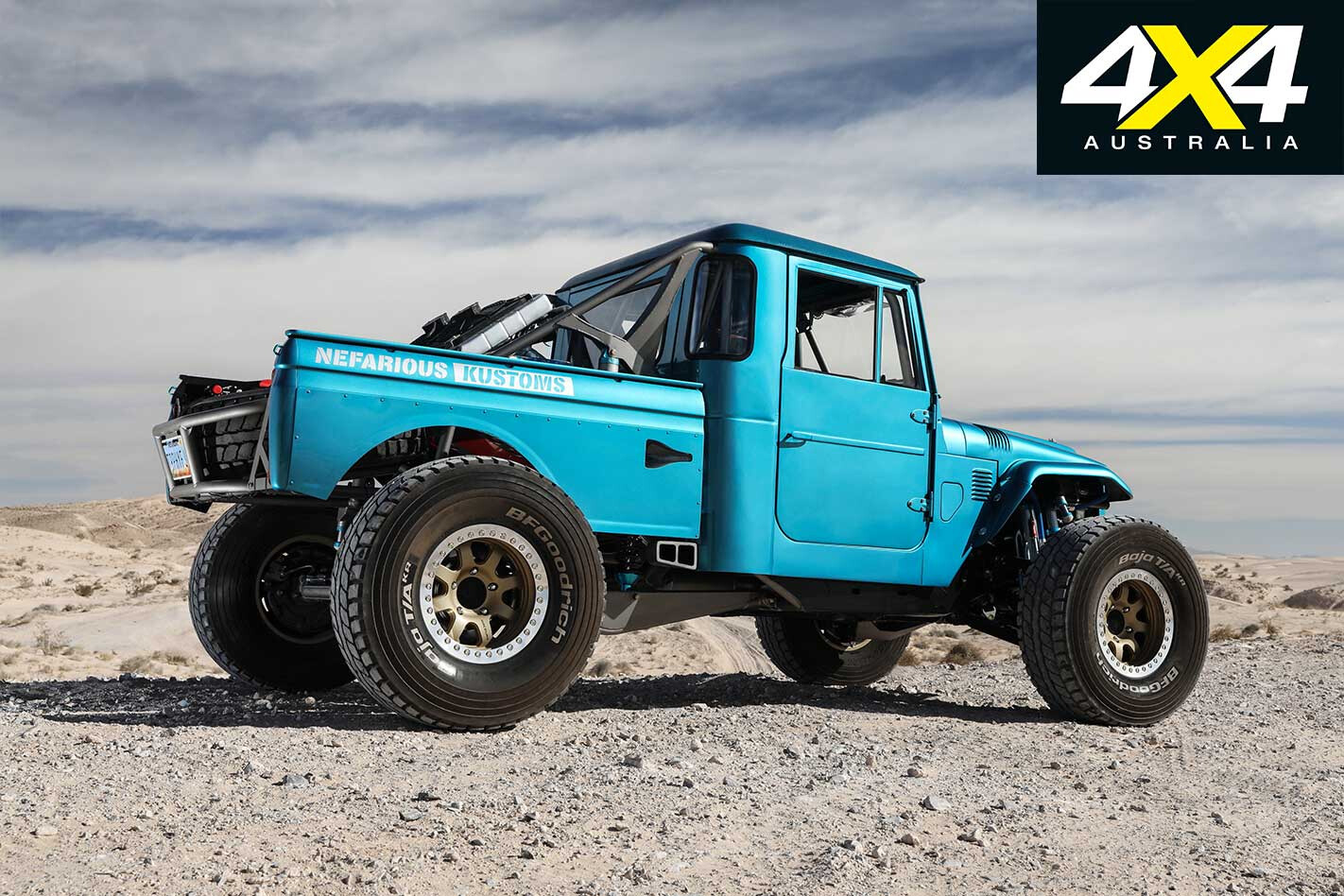 “After coming back from pre-running the Baja 1000 in my Ultra 4 solid-axle race car, I decided the Land Cruiser project needed to shift gears for improved ride and high-speed off-road handling,” Cameron recalls.

“We ditched the solid axles and found a 2007 Tundra 4x4 that would donate its IFS frame as well as the 5.7L/six-speed automatic drivetrain. That is when it shifted from a rock-crawler-based build to a full-on Toyota powered pre-runner.”

A quick lesson in American off-road racing here for y’all: Baja, Mexico, is the Mecca of off-road racing in the Americas, and each year both 1000- and 500-mile races (as well as other events) attract the best racers in the world to the desert.

The heavy hitters of Baja racing are the trophy trucks – full-tilt, fab-framed, 800hp racers with carbon-fibre bodies that loosely resemble that of a pick-up truck. Pre-runners are the vehicles the race teams use to reconnoitre the racecourse before the race to take notes and be better prepared.

Pre-runners are loosely based on trophy trucks, but usually feature full interiors, are sometimes four-door double-cab bodied, and are road registerable in most states of the USA. Hence the TRPHYFJ plates on Cameron’s rig and, yes, this beast is street-driven.

The Tundra was stripped down to a bare chassis and all the non-essential parts sent to scrap. The back half of the chassis was chopped off and Cameron fabricated a new back half from steel tubing, on which he could hang a pair of 56-inch-long trailing arms and the now-trussed Tundra differential on a set of King coil-over shock absorbers.

They are 2.5 x 16-inch units working in tandem with 3.0 x18-inch quadruple bypasses to give a full 24-inches of travel in the rear end. The rear-end chop and rebirth shortened the Tundra chassis to a 116-inch wheelbase, just like an FJ45.

The custom tube work extends forward on the chassis to incorporate the full roll-cage and pick-up points for the front suspension. Here we find a long-travel race kit from California’s LSK Suspension. The LSK arms extend the wheel track a full 10-inches wider to allow 19-inches of travel from the IFS.

In the Trophy FJ it benefits from custom headers and a free-flowing exhaust system, so it makes more than enough grunt to make the ‘considerably lighter than the Tundra’ FJ exciting. The stock Toyota six-speed auto has been retained, along with the brakes and other ancillaries. The brakes are upgraded with slotted rotors and stainless steel lines, while the transmission has been calibrated for faster shifting.

With the rolling chassis sorted it was time to add the vintage Cruiser body, but there were mods to be done there first. Starting with the FJ40 cab, Cameron cut the back off and sectioned it to create a truck cab which is four inches longer than an OG FJ45 cab, giving more interior space.

The floor and roof were hand-fabricated to suit, while the bonnet is a Campbell Racing fibreglass piece which has been grafted to the cut-down guards to create a lift-off unit. The guards not only allow clearance for the added suspension travel but leave that King suspension hardware within eyeshot.

The rear body work is also handmade. Nefarious used aluminium sheet for the sides and grafted the top edges from an old Datsun pick-up bed to the topsides. NACA-style ducts divert cool air to the shock absorbers, which take up much of the space in the back.

Cameron built this truck his way for himself, and its first public outing was on the Raceline Wheels booth at the 2018 SEMA Show. Such was the huge response to the truck that a buyer from Dubai made him an offer that was too good to refuse.

“I didn’t want to sell it, but he really wants it,” Cameron concedes as he prepares a few changes that the new owner has asked for. “It will have 4.88 Nitro gears, a Magnuson supercharger, airconditioning and a Baja Designs Lazer Series 30-inch light bar when it leaves.”

But this won’t be the last we see of the Nefarious FJs, as there will be more to come. Cameron has built this vehicle as such that he’ll be able to replicate them to customer orders with a nine to 12-month turnaround. And as for his own FJ street build, Cameron says, “I’m going to build a long travel IFS, four-seater Troopy.”

We’ll be keeping an eye out for that one.