Want to go further? Bigger tyres will fit that purpose. Travel longer? That purpose will need a set of drawers. Comfortable camping? A rooftop tent and roll-out awning will hit that purpose head on. 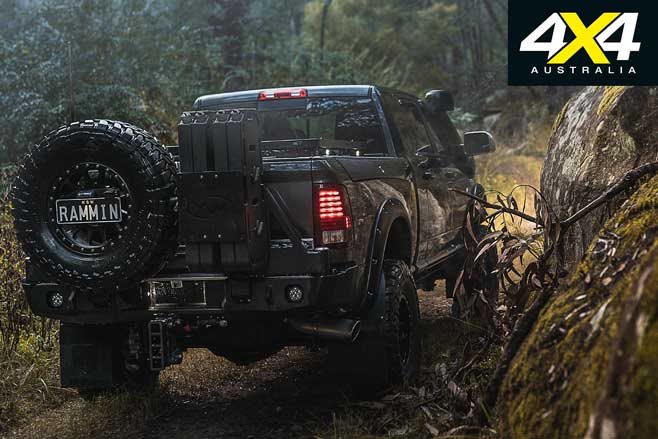 But what if the purpose is an idea, rather than a thing?

It’s something the owner of this one-of-a-kind Ram 2500 was faced with. Charlie is one of those blokes who always strives for more, and together with his late wife they strived for more for us. Political beliefs aside, it’s clear as day that Australia is losing native species at an unprecedented rate. Together, the pair aimed to do something about it.

They’d set off into the remote reaches of Australia; far beyond phone reception, where the black-top ends and the true wild begins. Through hard graft and harder determination, they’d seek out barren private property to turn into a sanctuary for endangered Australian natives, revegetating one plant at a time out of their own pockets before signing the lot over to all Australians.

Various options were looked at for the pair to not only lay their heads down at night, but also to cope with the rugged terrain they’d be travelling through. Land Cruisers? Not enough room. Land Rovers? Not rugged enough. A dual-cab ute? Not even close. The solution ended up being the pinnacle of off-road workhorses, the toughest of the tough and the strongest of the strong: the Ram 2500. 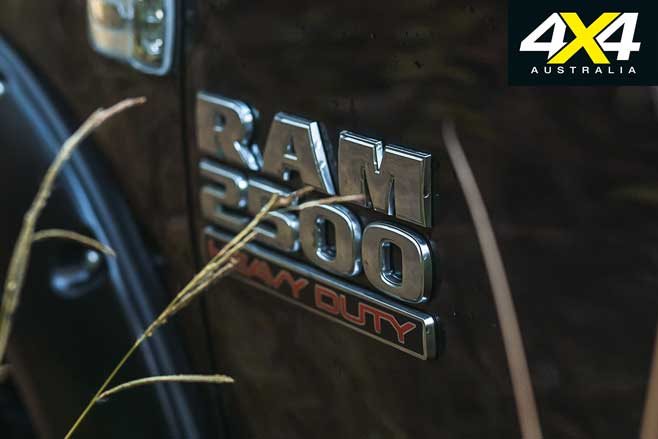 The example you’re looking at has been expertly pieced together by Sydney company Trucks ’N’ Toys, but the base vehicle is one of the most robust platforms on the market: huge live axles, a truck-like turbo-diesel engine, and the most interior space of any 4x4 thanks to the extended Mega Cab option (picture a dual-cab with a space cab on the back). However, this one isn’t the base spec; it’s so much more than that.

Starting from the ground up, Charlie had the guys at Trucks ’N’ Toys source him a top-spec Limited Ram 2500 before putting them to work. Underneath, they’ve completely gutted the standard suspension arrangement to make the Ram work better off-road and ride like a dream.

Starting from the front end, the factory live axle now rides on a full air-ride suspension arrangement from Kelderman. It sits five to six inches higher than stock as a baseline, but with an onboard air system the ride height is easily adjustable in-cab from one-inch over stock up to an eye-watering 10-inch lift if the Ram ever finds itself bellied out. 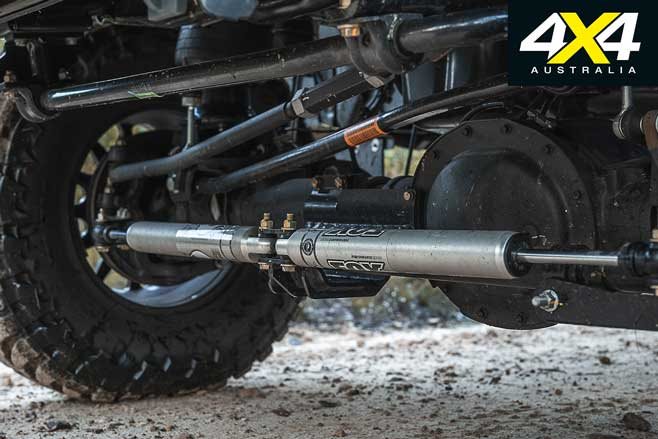 The ride quality is further dialled in with massive 2.5-inch Fox shocks; their remote reservoirs adding additional cooling capacity. There’s a Kelderman twin-steering stabiliser kit running two Fox 2.0 shocks, to reign in the monster of a front axle at high speeds. For context, that’s the size of a shock absorber in a Ranger or Hilux, just to smooth the steering.

In the rear, the Ram 2500 from stock runs a full link and coil arrangement, with disc brakes and a staggeringly large 11.5-inch diff centre. Again, the stock springs have been discarded in favour of a Kelderman air-bag arrangement, although this time it gives ride-height adjustment and, with the options box ticked, can automatically account for towing or tub loads on the rear end and level the vehicle out. 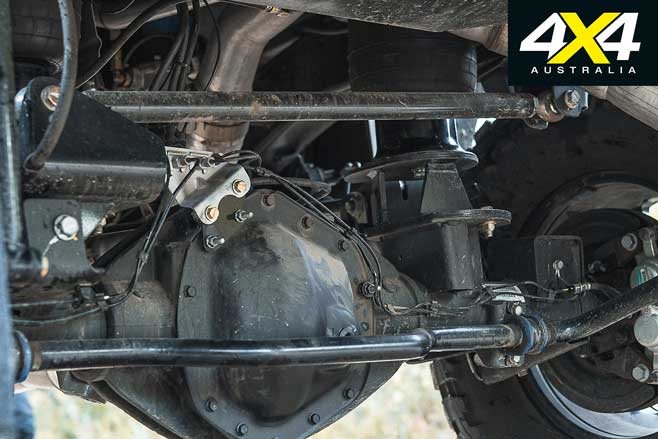 There’s also a matching pair of Fox’s top-dog 2.5-inch body remote res shocks. While Trucks ’N’ Toys were underneath installing the fancy new suspension, Charlie had them pull both diff centres and install some of the largest Air Lockers ARB make, for traction at the push of a button.

In typical US fashion the suspension system is designed for gargantuan tyres, and Charlie’s Ram is no disappointment. He’s kept things thematic with both wheels and tyres waving the Star-Spangled Banner. 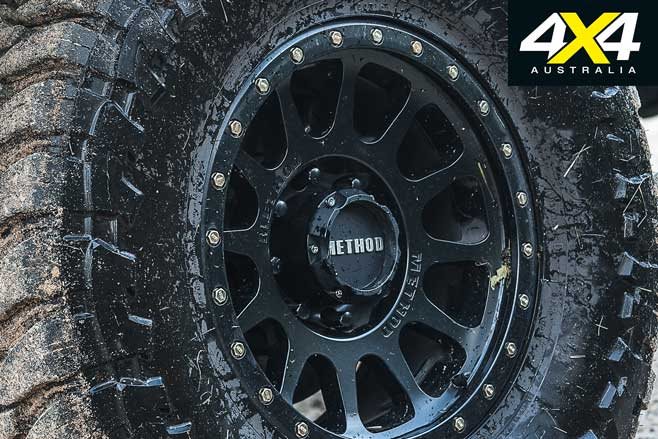 Each corner is shod in Method Race Wheels NV alloys, with their eight-lug design and optional heavy-duty spec giving them a load rating of more than 2000kg each wheel. The tyres are similar overkill compared to typical Australian-delivered gear. The over-sized 37x13.5 R18 mud tyres from Toyo punch in with a 1600kg load rating; 600kg more than a typical 33-inch tyre will bear.

On the outside the Ram’s been decked out head to toe with bush-ready gear. Up front there’s 120kg+ of plate steel hanging off the frame rails, in the form of the Stealth Pre Runner bar from Road Armour. 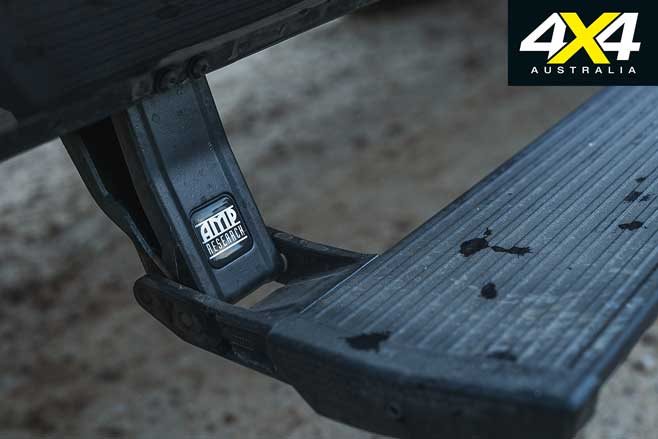 Charlie shoehorned Warn’s heavy hitter 16.5TI-S winch – providing nearly 7500kg worth of pulling power – deep inside the bar, and it’s hinted at only by the Factor 55 fairlead and Flat Link. Moving down the Ram’s flanks are a set of auto-opening electric side steps to make entry and exit an easy affair, while a Front Runner platform rack above the tub opens ample storage options.

The rear end copped similar treatment, with an up-armour from US-based Expedition One – the enormous rear bar easily housing the 37-inch spare tyre on one swing arm, with the other holding 60 litres of diesel with four RotopaX-style jerrycans. 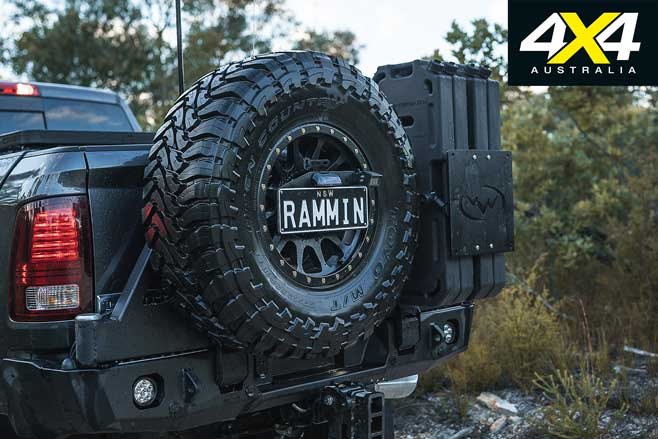 Moving inside and the Ram’s adorned with an interior more fitting of a Cadillac than a workhorse. The top-spec Limited trim has the Ram decked out from head to toe with leather trim. Front seats are heated, while the rear seats recline into the spacious Mega Cab section.

There are plenty of hidden gadgets inside, too, like the GME UHF and Cel-Fi mobile phone extender, but the real thing of interest to off-roaders is the Switch Pro system. Replacing eight rocker switches and the associated solenoids, the Switch Pro system allows eight user-programmable functions through the one touchpad. 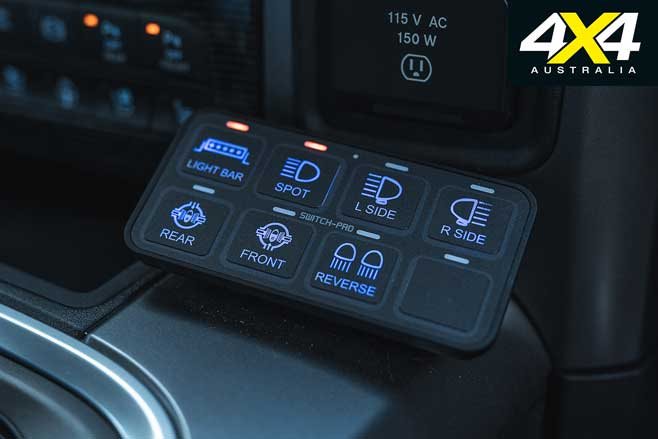 Charlie’s set his up to run the front facing, rear facing, and side facing lights, as well as the front and rear lockers. The whole system can be controlled via a phone app from the comfort of a camp chair, and it can be optioned to control everything from compressors to torque convertor lock-ups and even winch controls.

The one crowning achievement of the whole build is that it’s 100 per cent road legal, passing all lane-change tests, brake tests and swerve tests; not only for the air-ride suspension but also the bigger rolling stock. It might not be the most conventional tourer, but for forging beyond the black stump with nothing but dust in your rear view, it’d be hard to imagine anything else coming close.

Built for a purpose on custom 4x4 reviews 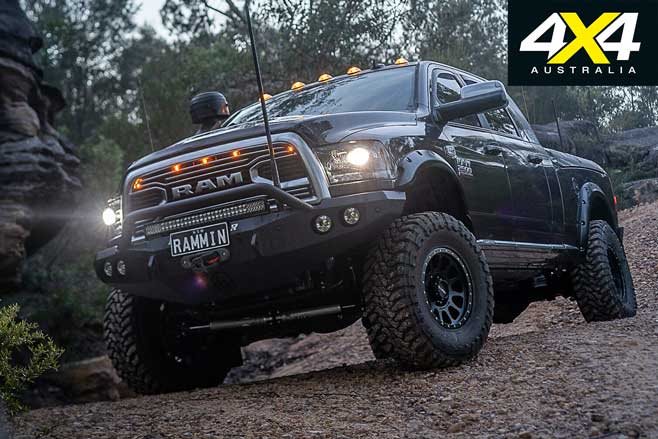 WITHOUT a doubt, one of the defining characteristics of Charlie’s Ram is the full air-ride suspension. Despite being relatively new in Australia, it’s a technology that’s been polished for the better part of a decade and may just be the ultimate setup for serious off-roaders. 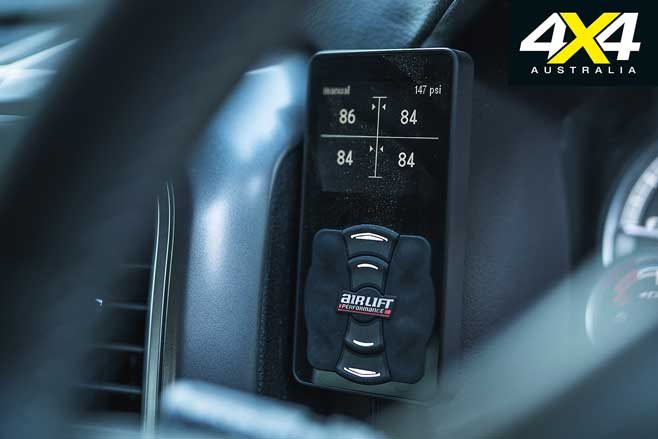 The system is relatively simple. Inflatable, heavy-duty airbags replace the stock coil springs. They’re filled and emptied with electronically controlled valves and fed by an onboard 12V compressor and air-tank.

Want a smooth ride or to lower the ride height? Dump air from the system and the ride will be silky smooth. Need to account for added weight, or looking to clear an obstacle? Pumping compressed air into the bags will stiffen the ride and increase height.

They can be controlled with a simple switch; although, high-end self-levelling systems use a position sensor to automatically compensate for changing loads in the rear. 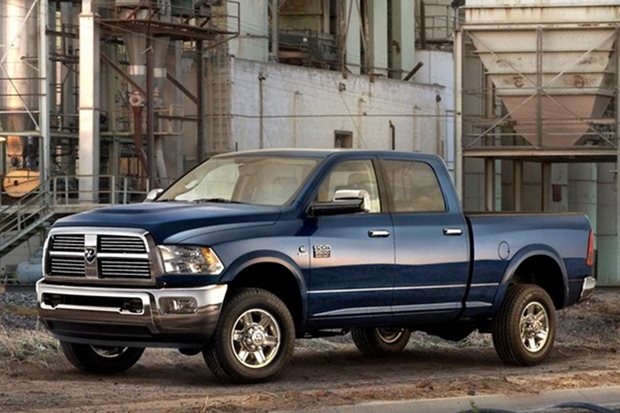 These are the most powerful utes you can buy

Itching to get a V8 Ford Ranger Raptor but can’t wait? You’re not left totally high and dry 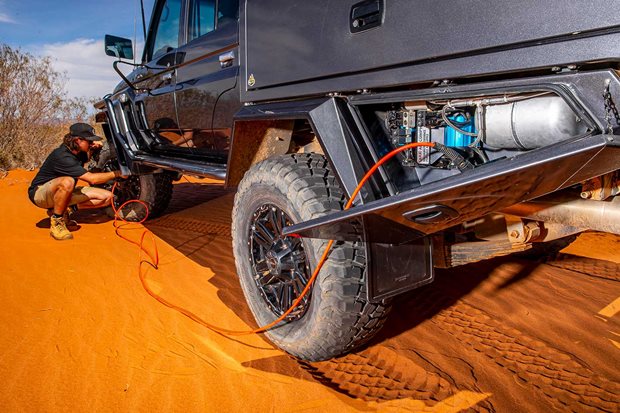 Know right to blow right when it comes to selecting the best air compressor. 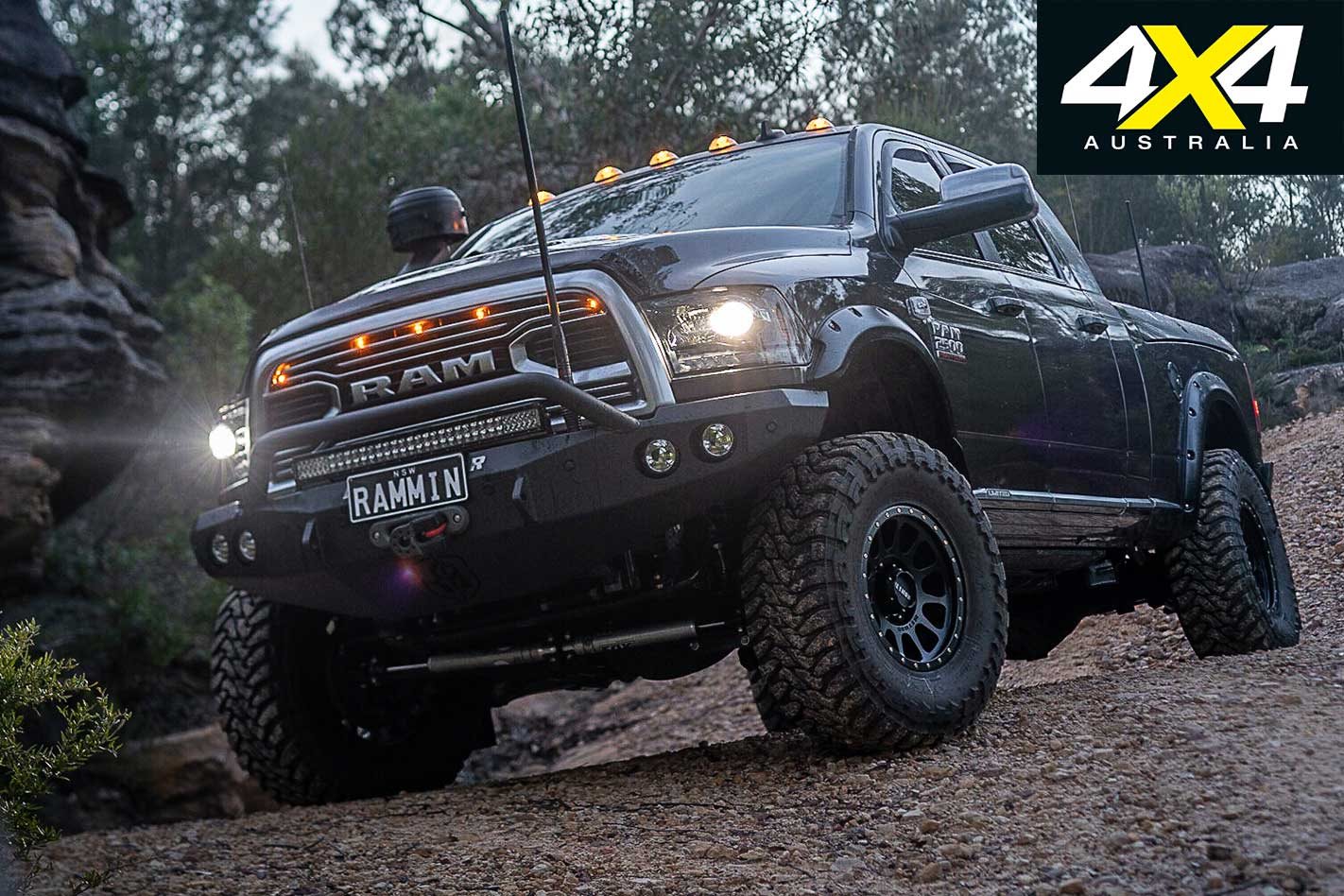 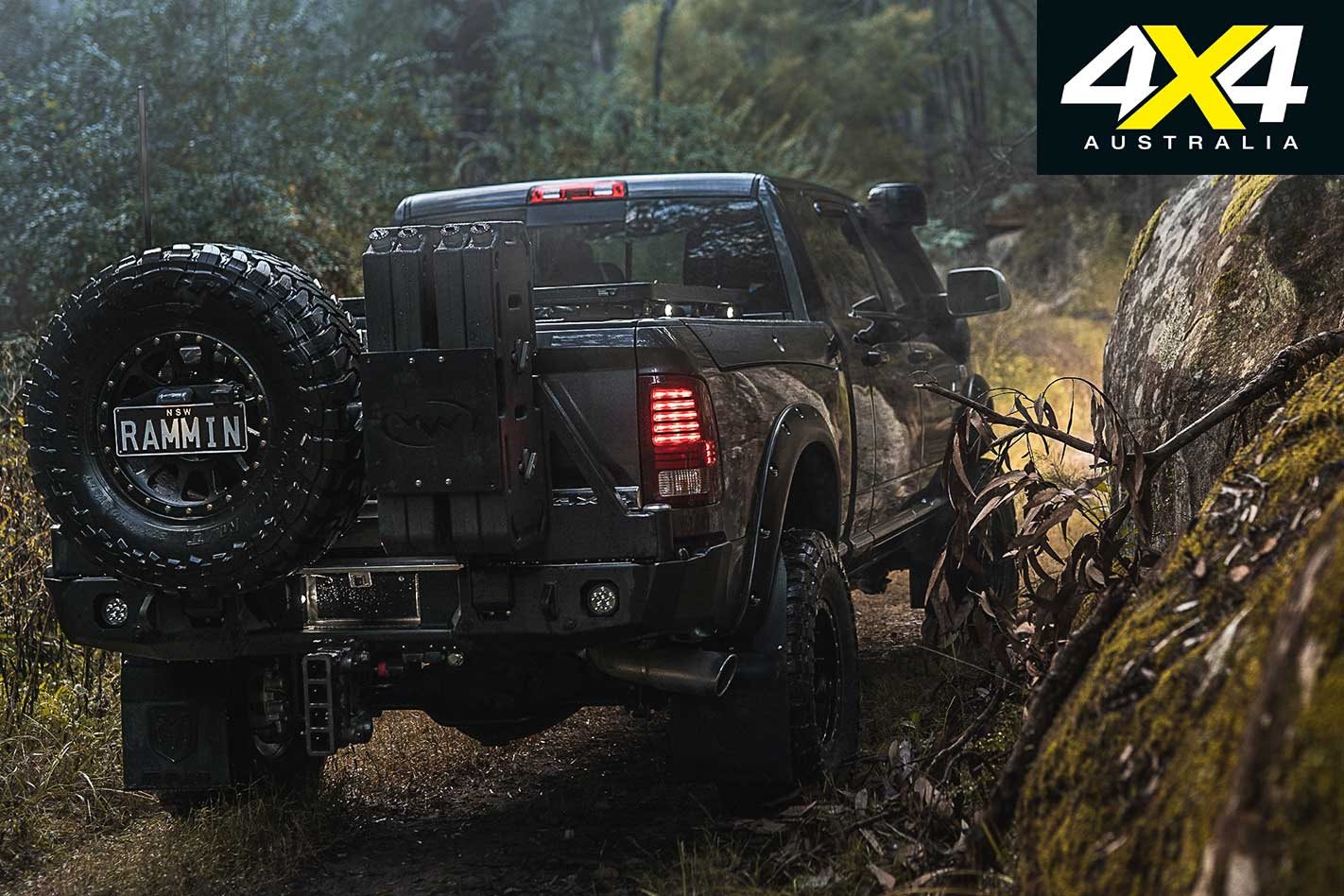 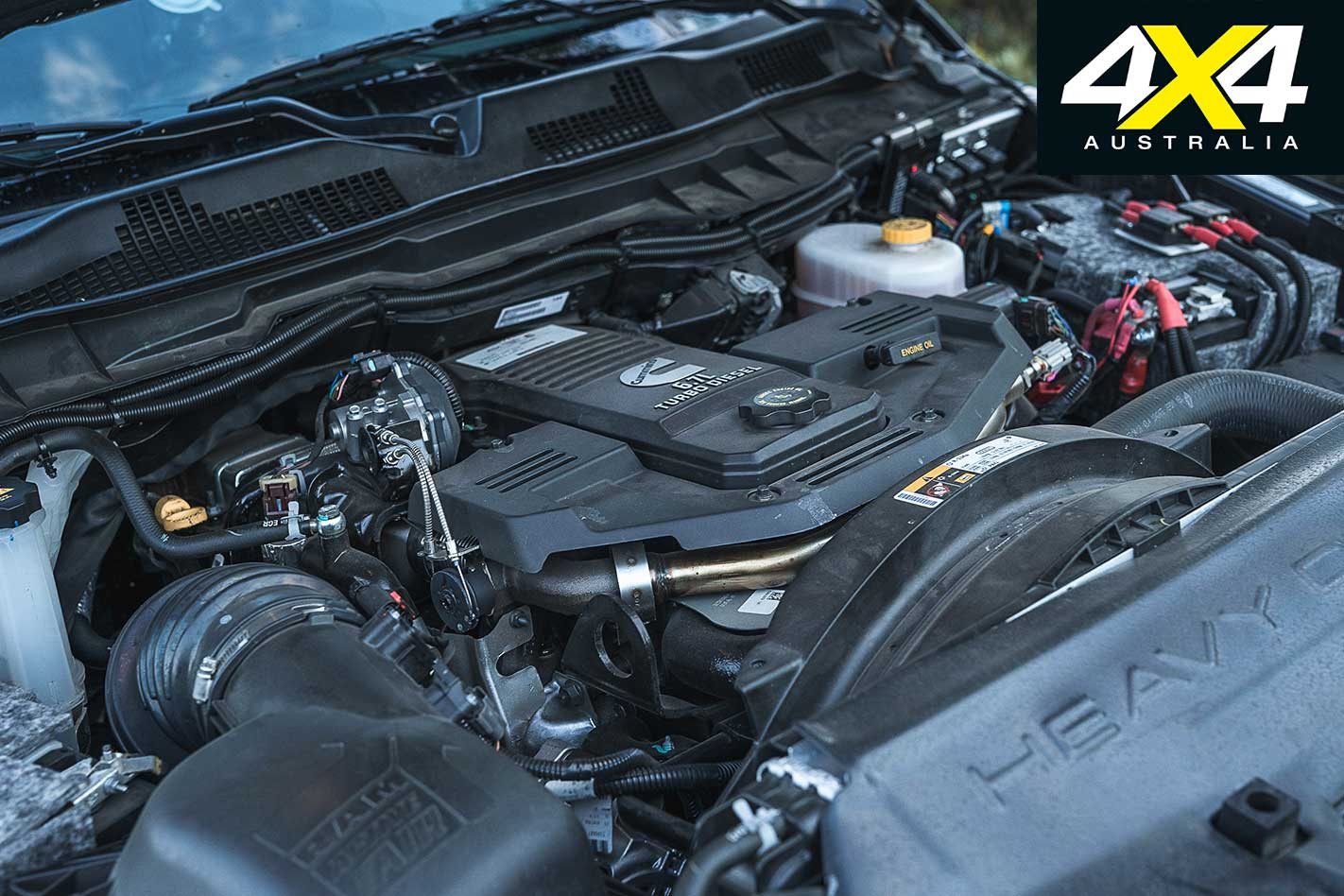 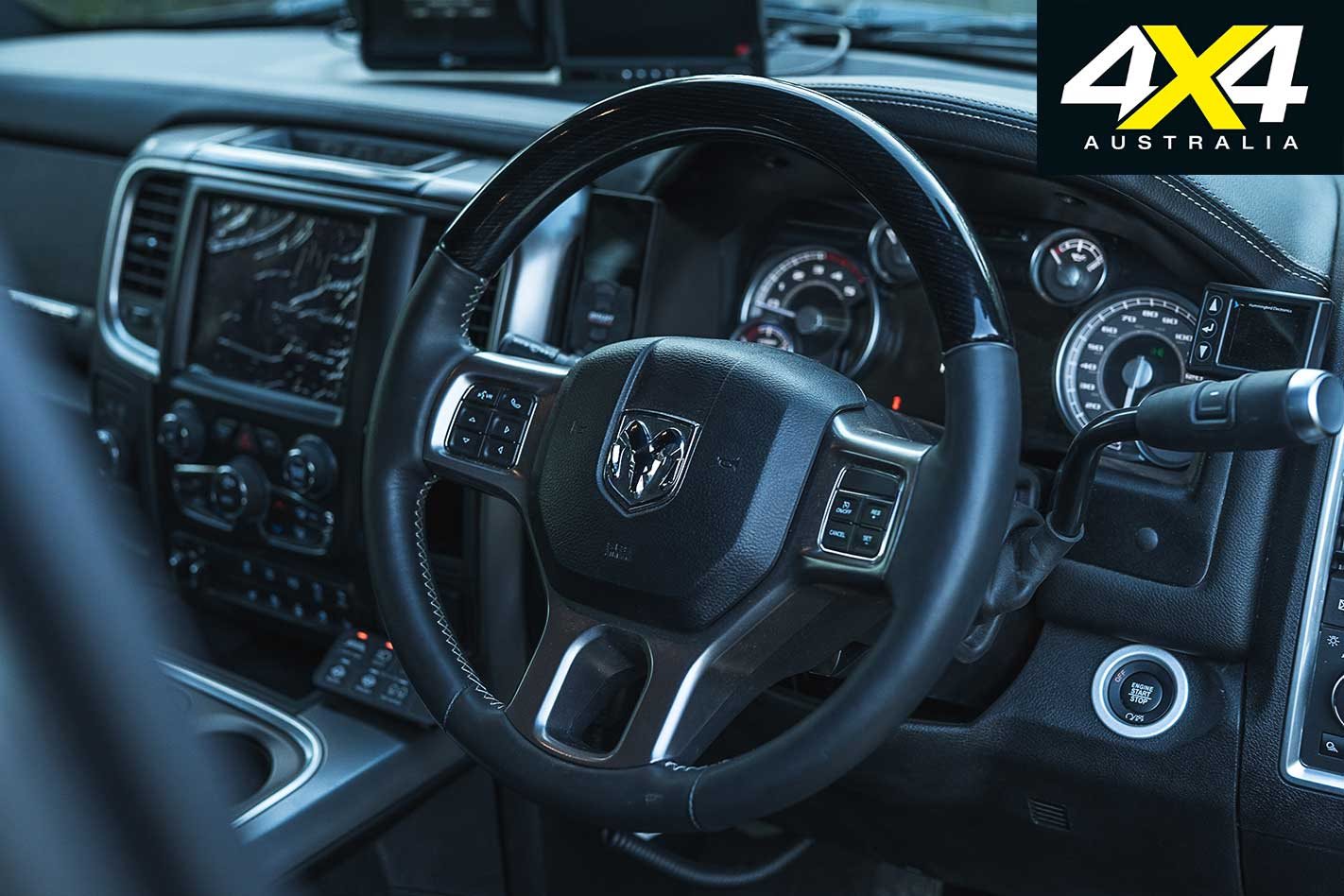 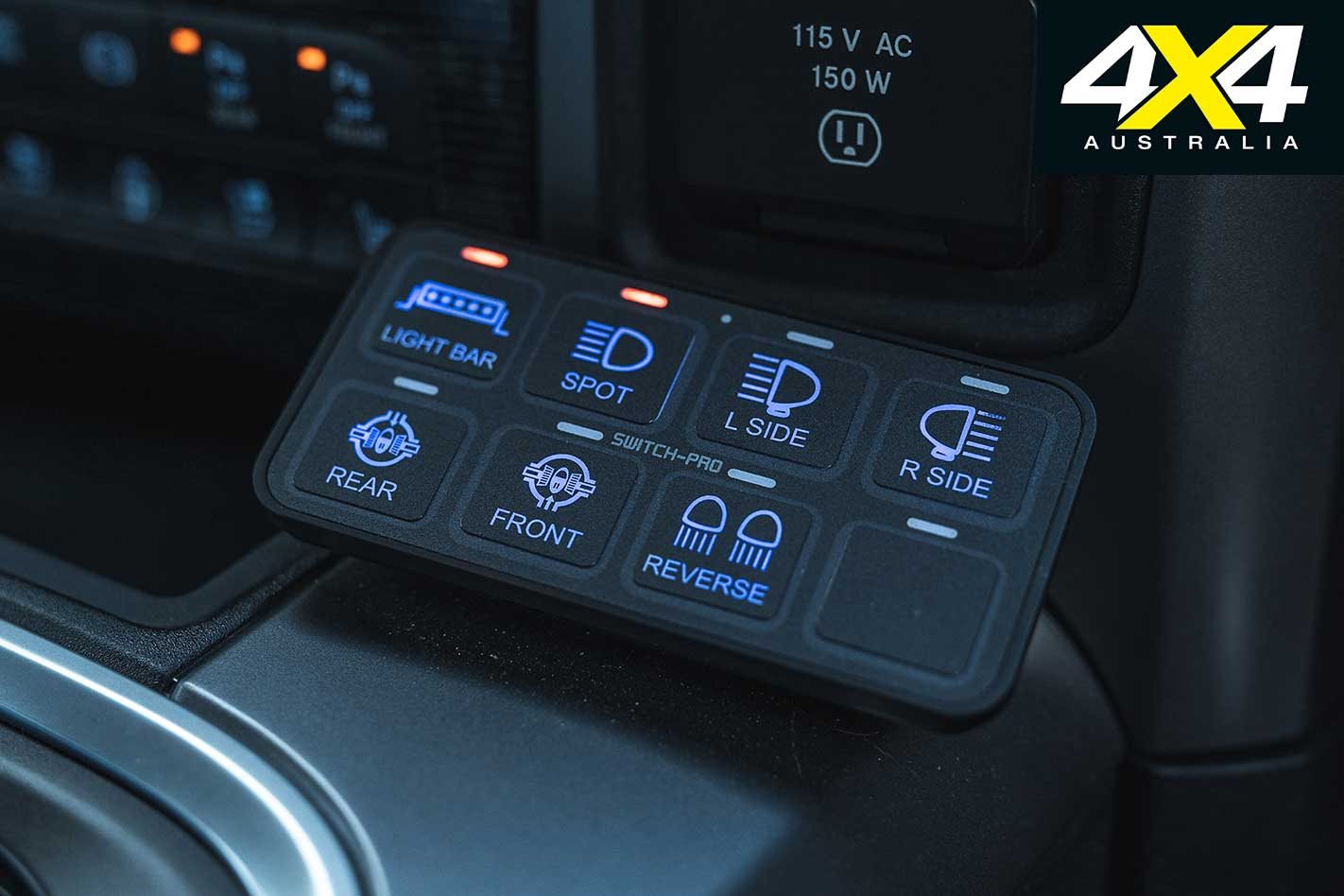 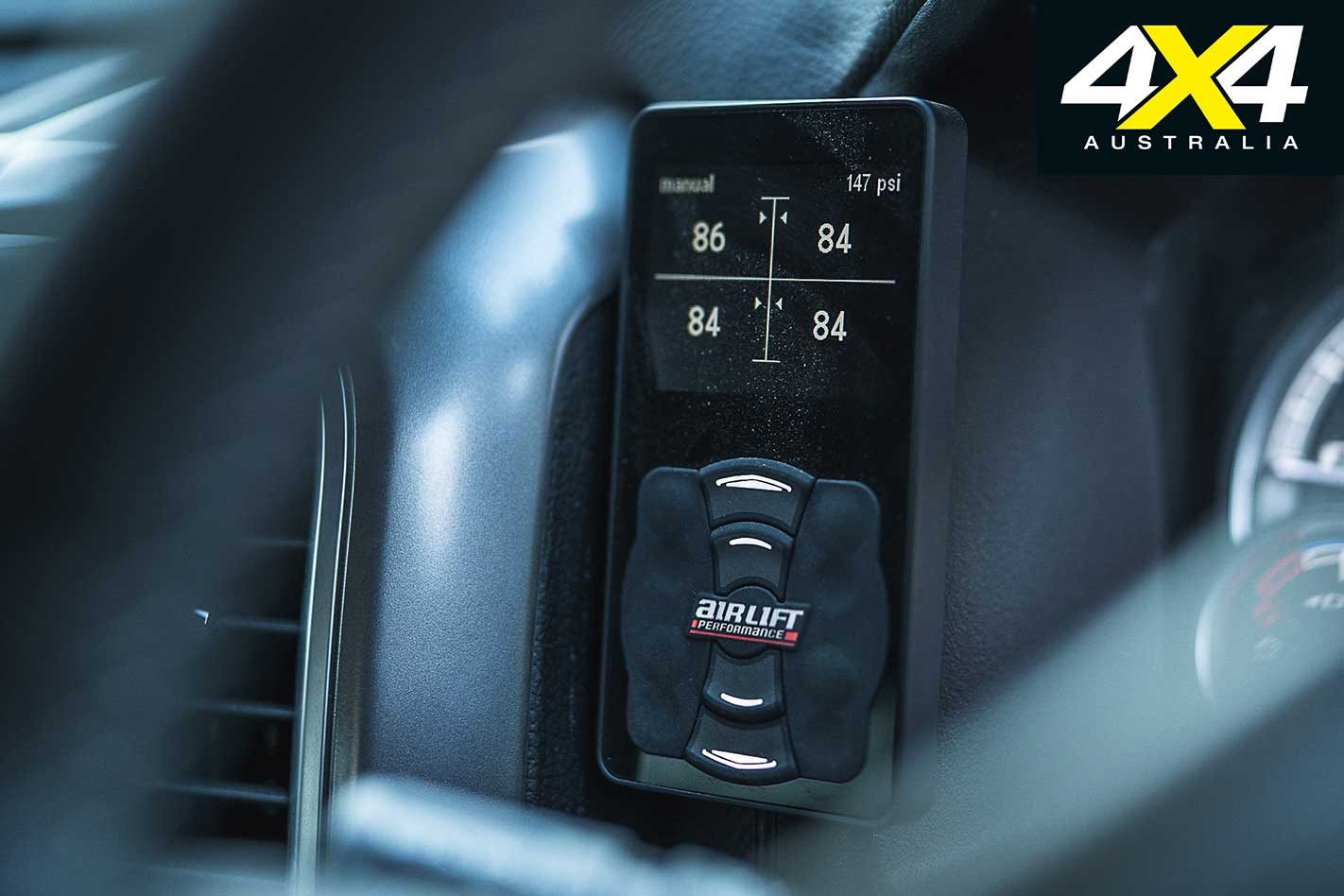 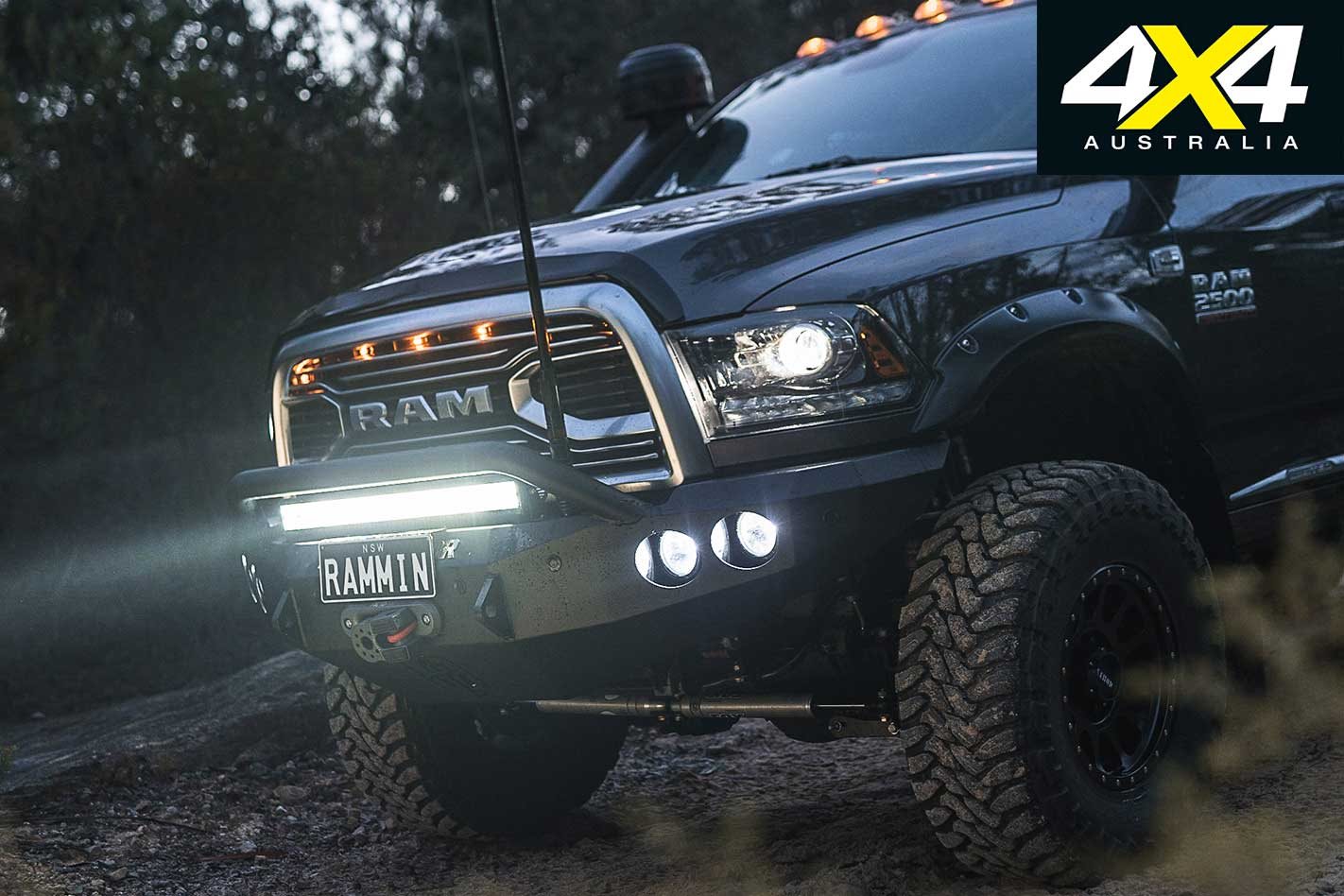 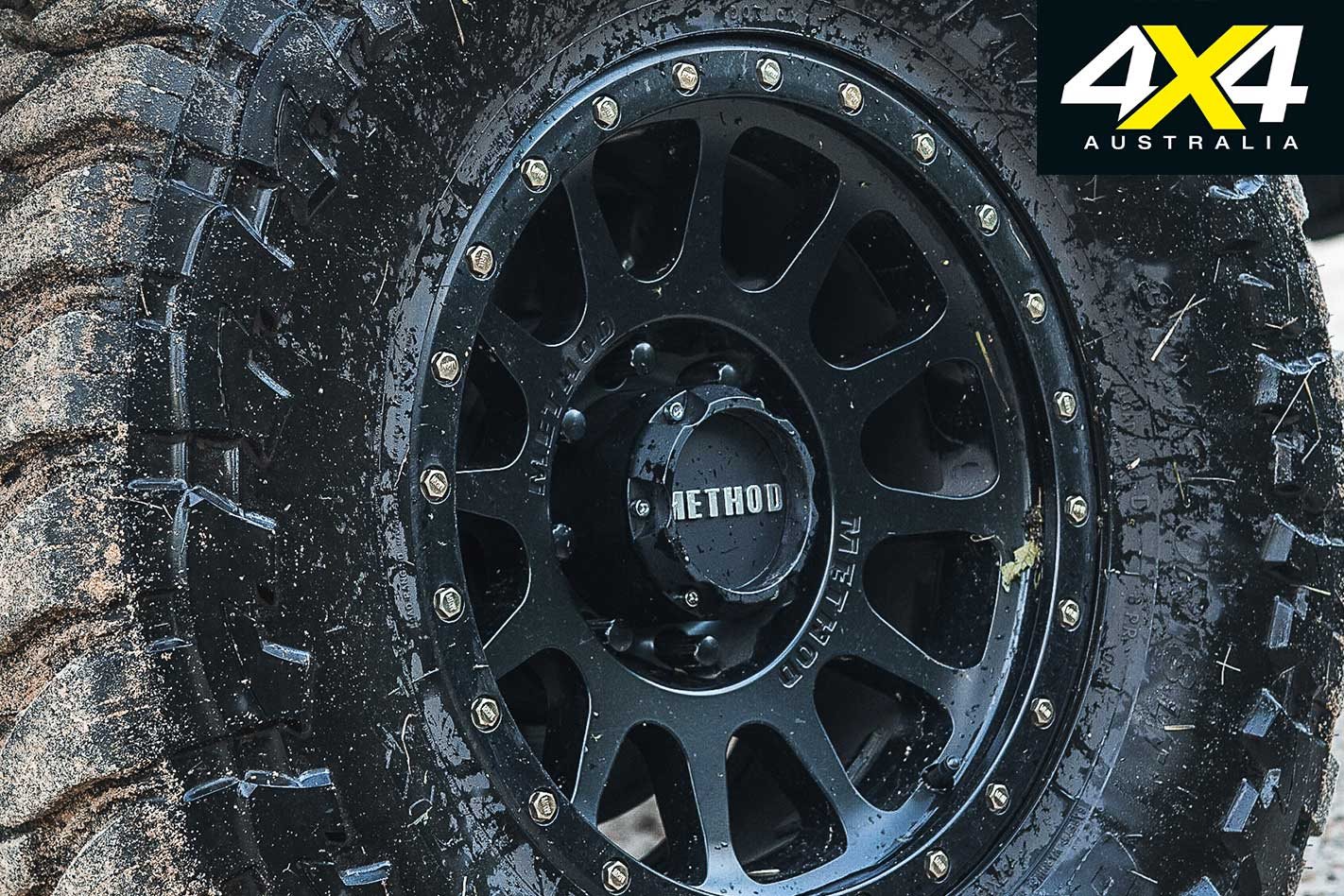 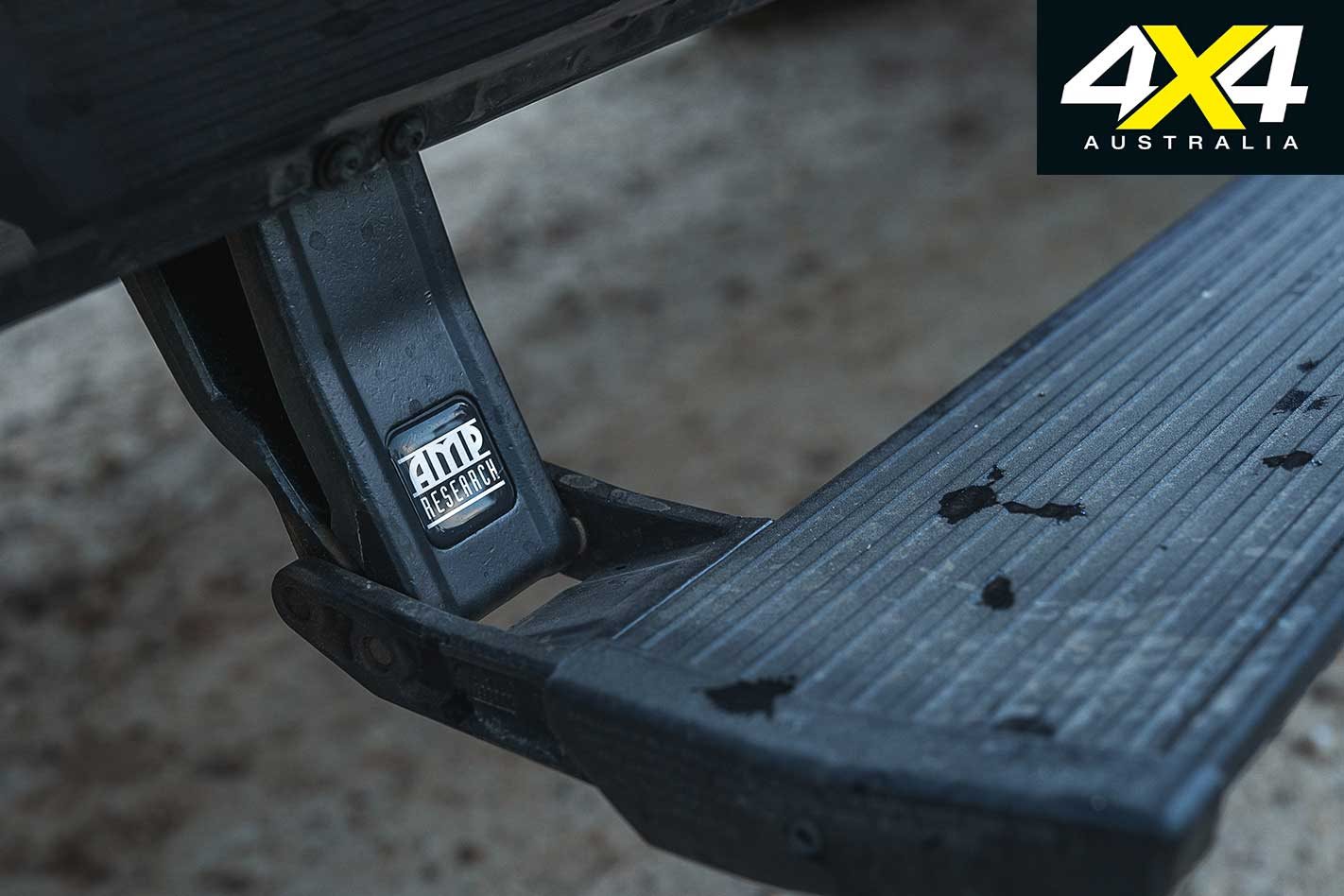 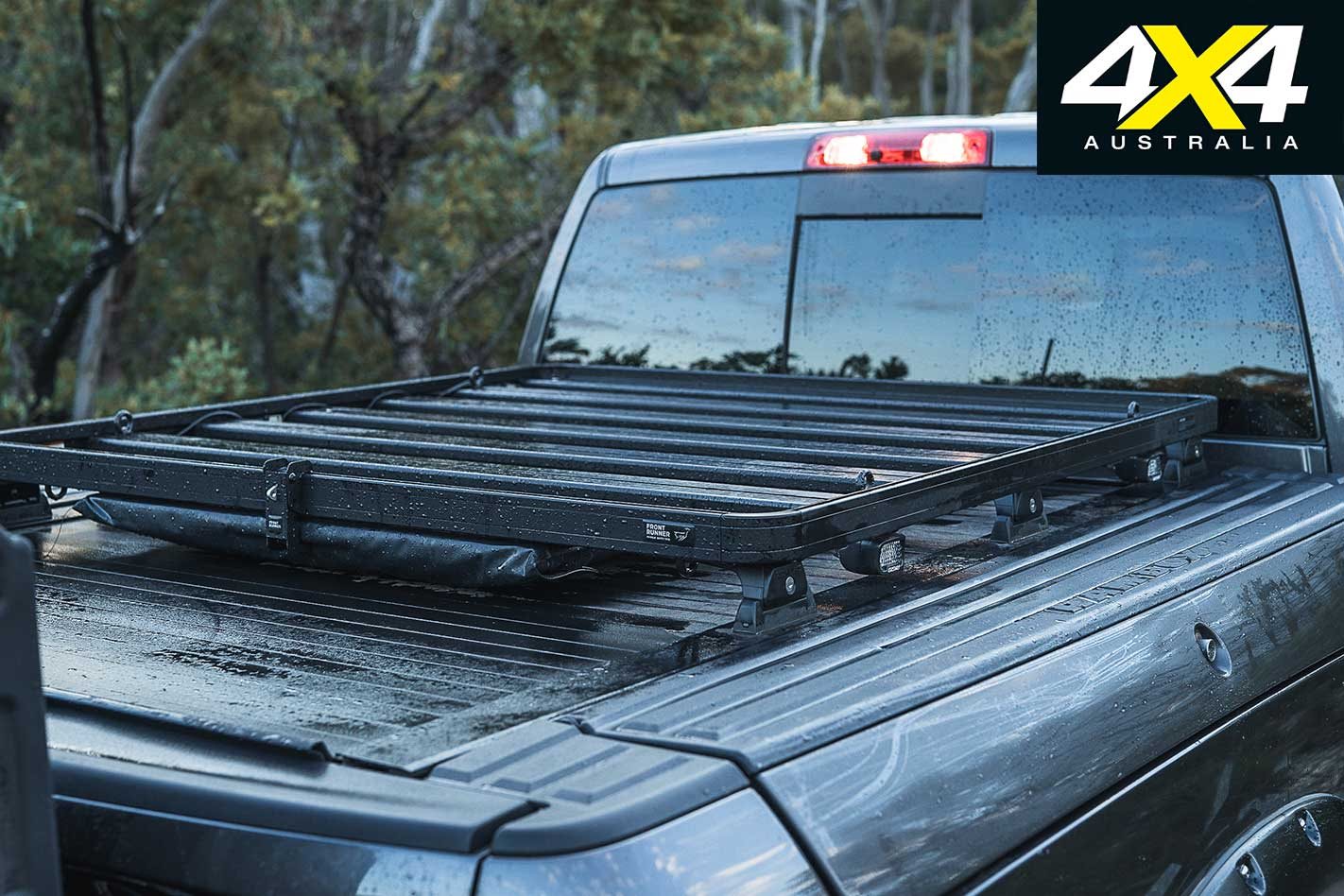 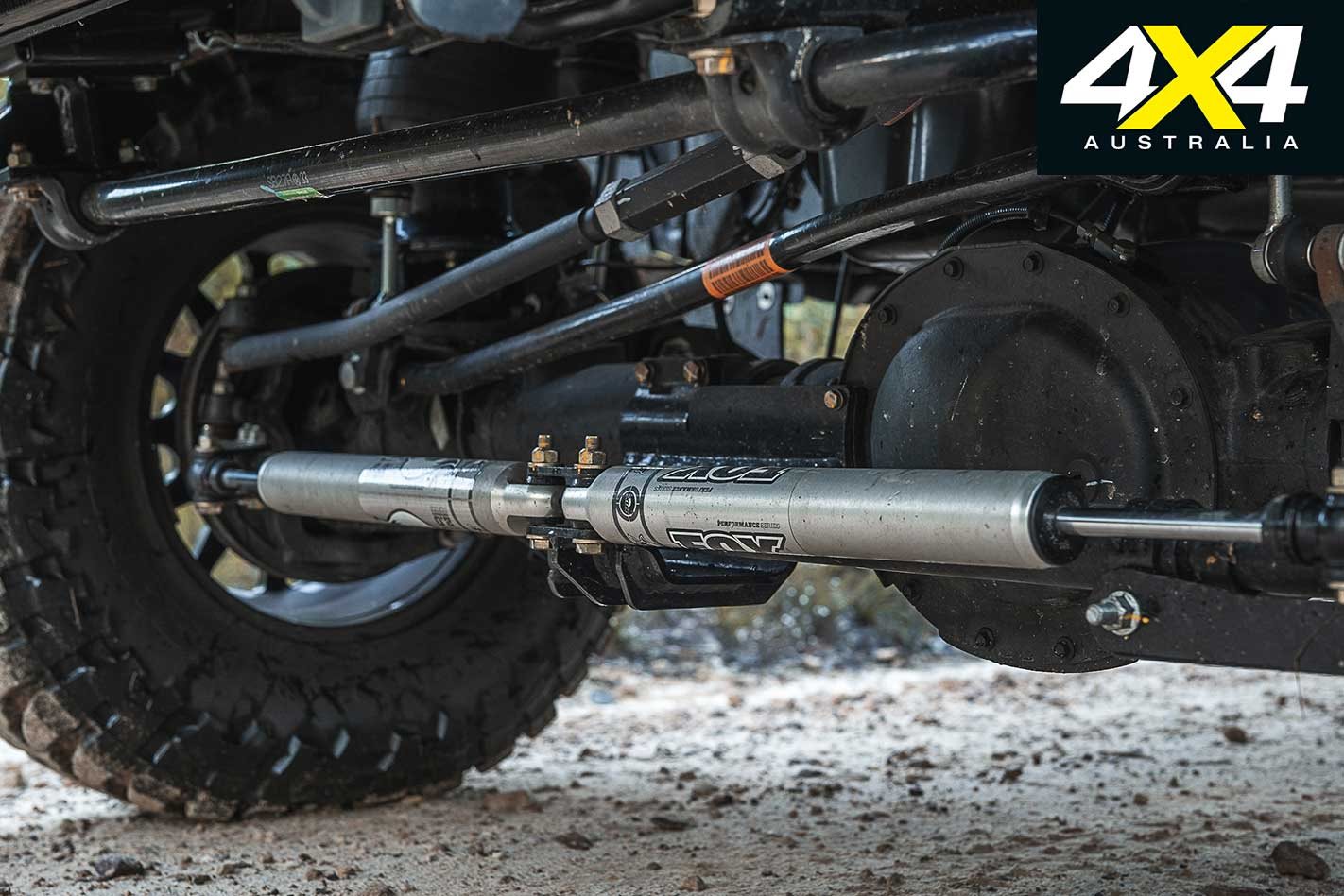 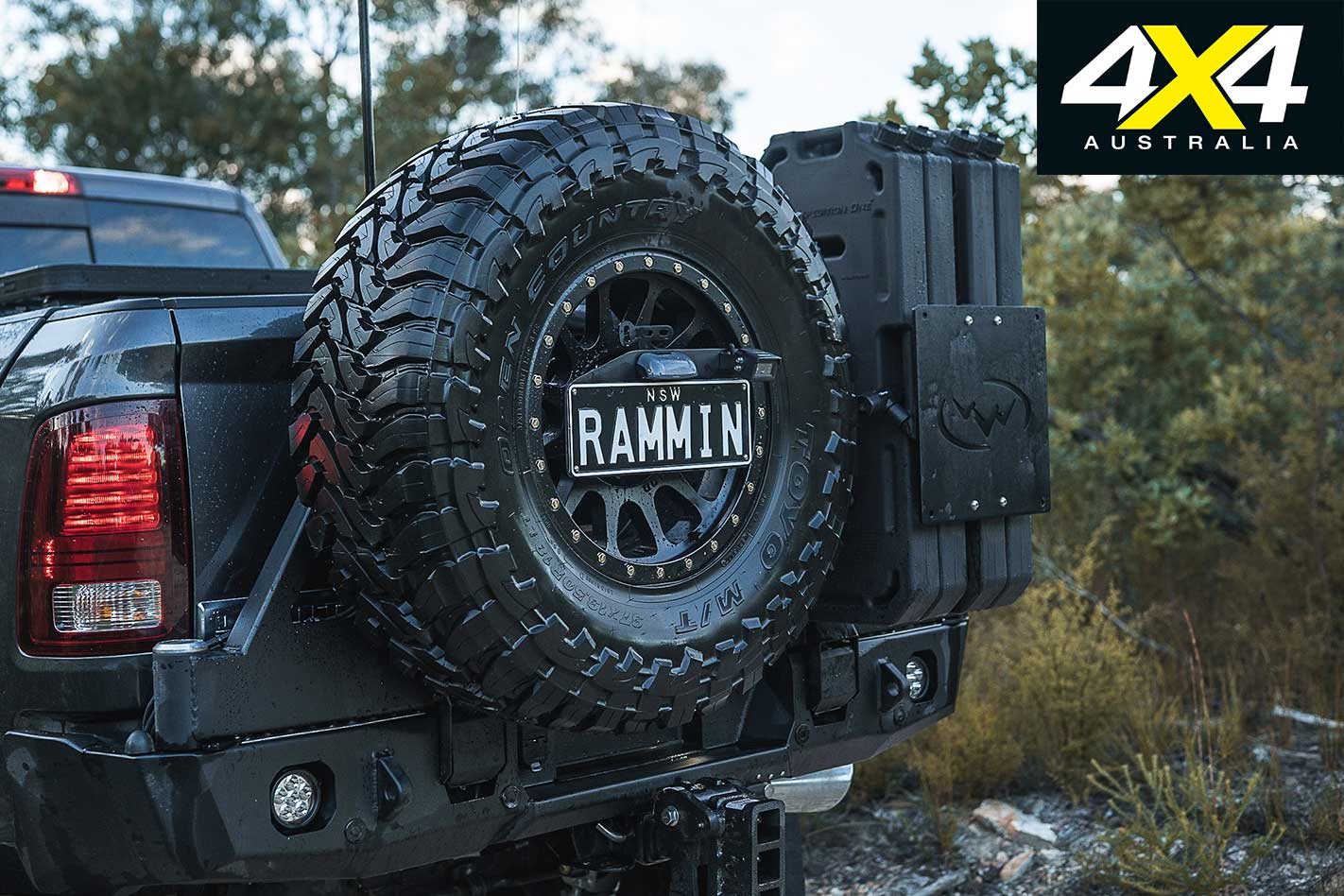