LET’S PUT a V8 in it.” Gary Coleman of Diesel Leaders doesn’t often hear a suggestion from a client along those lines, especially when they’re discussing a Ford Ranger.

It may well have been said out of exasperation, though. Gary’s client, who wishes to remain anonymous, was trying to figure out what to do with his Ranger after it had blown its standard 3.2-litre inline five-cylinder engine. 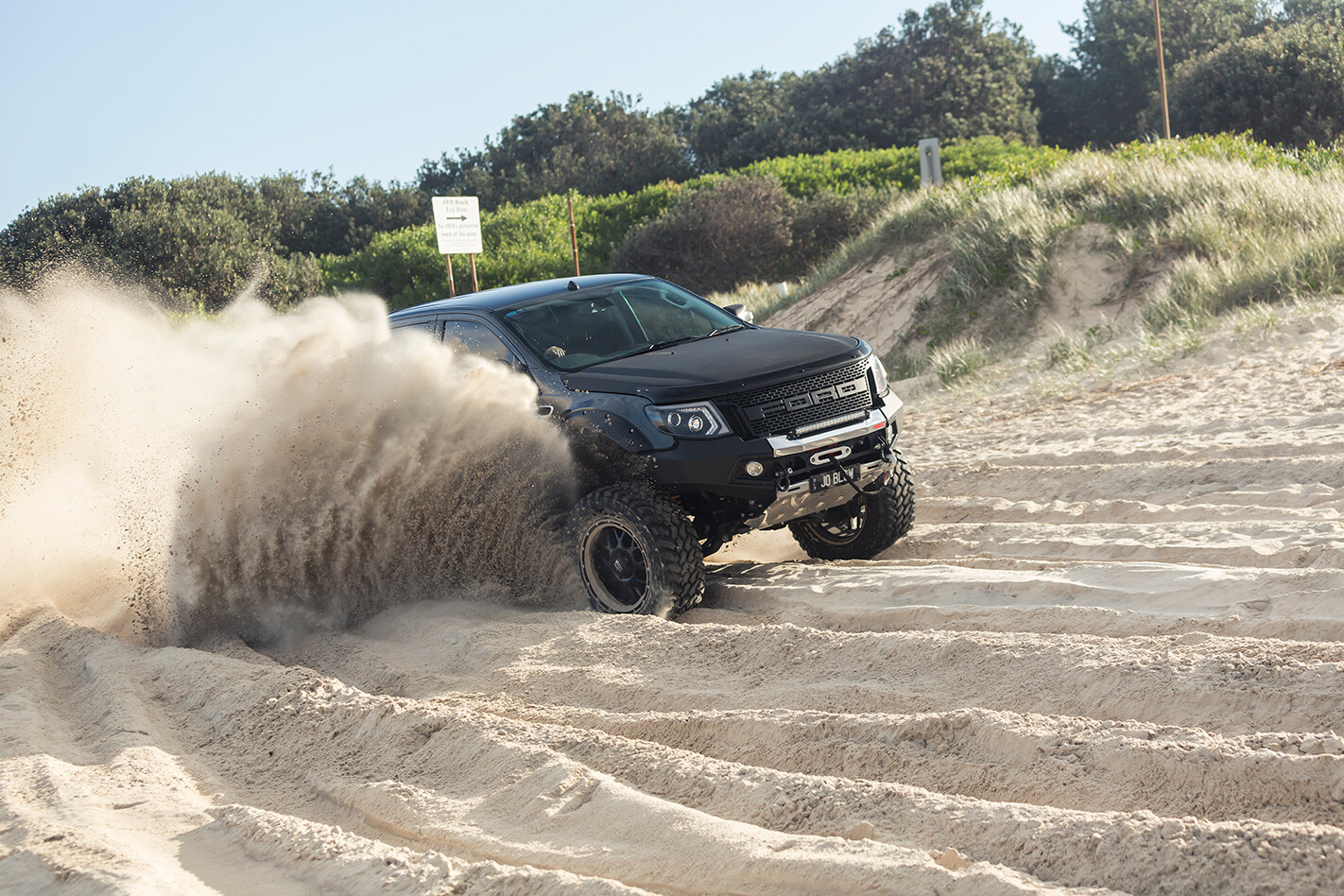 Maybe it just popped into the owner’s head that fitting a Ranger with a V8 petrol mill would make it a local equivalent to the Ford USA off-road monster that is the F150 Raptor, but we’ll probably never know the real reason.

Instead, we can admire this tough rig for what it is: an example of how plenty of time, loads of patience, and exemplary engineering can transform a regular off-roader into something unique that retains a factory look.

WHEN Gary first saw the Ranger it had been rolled in with a blown engine, and the owner was having difficulty getting it replaced under warranty; so the conversation was struck up regarding options of fitting another engine. The owner suggested the option of a V8, and the conversation went from there.

“So we decided to put a V8 in it and had a think about what kind of engine we wanted to put in there. He [the owner] wasn’t too fussed,” Gary said.

However, he had one stipulation: the transplanted engine had to look factory, which meant for Gary and the team that it had to be a Ford engine. Even though the temptation was there, they weren’t altogether keen on going too crazy, dismissing the idea of a big-block engine in favour of a supercharged Ford ‘Coyote’ V8 that, in stock form, pumps out 335kW and 570Nm. 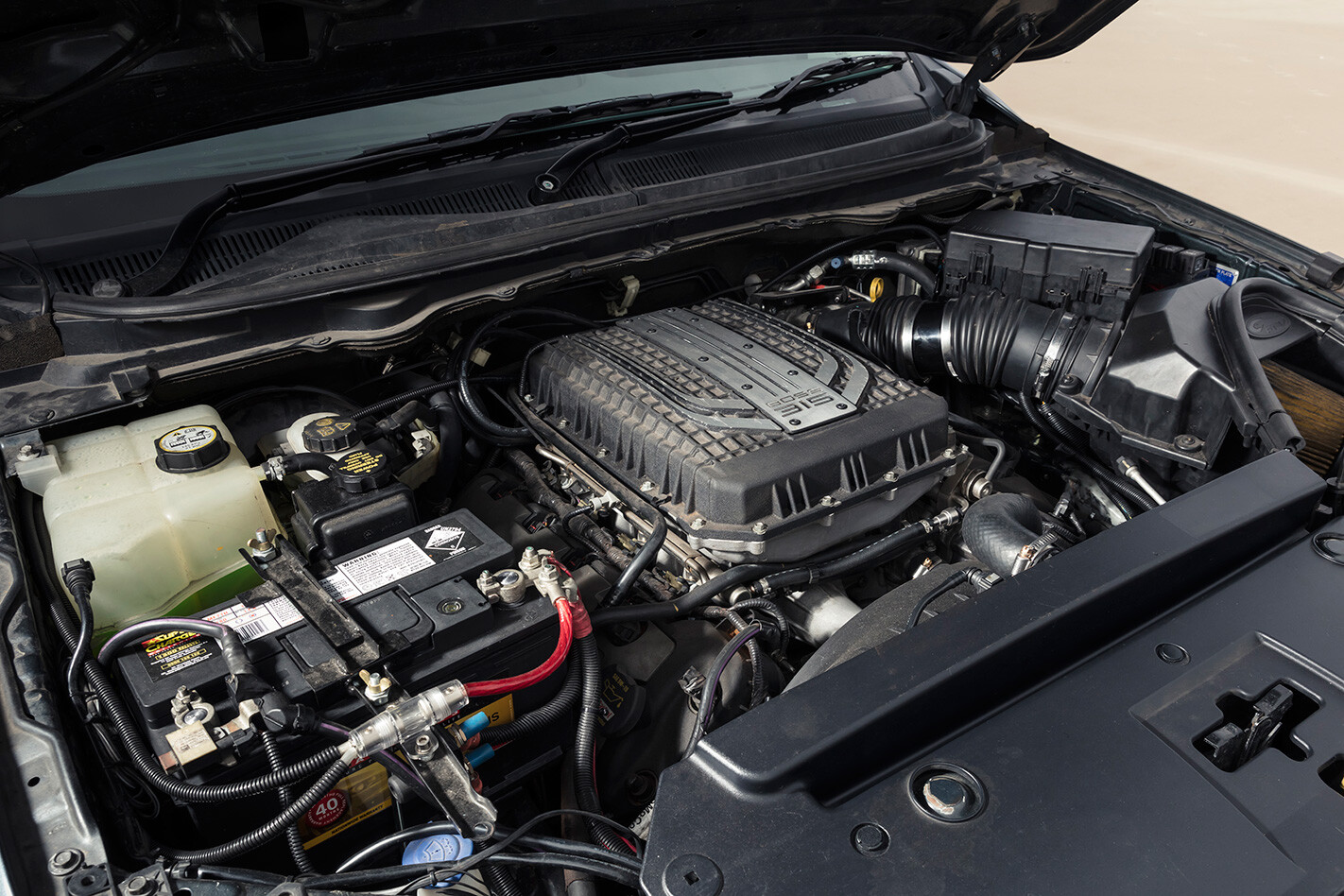 This engine was readily available in Australia, as it had been fitted to a number of high-performance Falcons. Gary also decided to stick with the Falcon’s six-speed auto gearbox to make the job as easy as possible. Then they just had to make it fit, before looking at further mods needed to complete the job.

Surprisingly, the engine bay didn’t need much in the way of modification. “To get the engine in, we just had to cut the top off the radiator mount. That was the only thing we had to do to get it in [the engine bay],” Gary explained.

The team had to manufacture new matching mounts for attachment to the engine block and the gearbox, to marry to those in the engine bay.

THE idea of fitting a Ford V8 petrol engine into a Ranger isn’t new, but few have wanted to tackle it. The seriously large engine is light, so weight isn’t the issue, but physically fitting this big bopper in the Ranger engine bay is no easy task as there isn’t much room.

“The problem is, the engine is so big there is only one spot that it fits. You can’t lift it up, or lower it, or move it forward or move it back; it has to sit in the exact spot that it’s in,” Gary said.

The engine’s snug fit was just one juggling act for the Diesel Leader team. Fitting the Falcon’s transmission to the Ranger transfer case was also a massive job, and a job few engineering companies were willing to risk their reputation on. 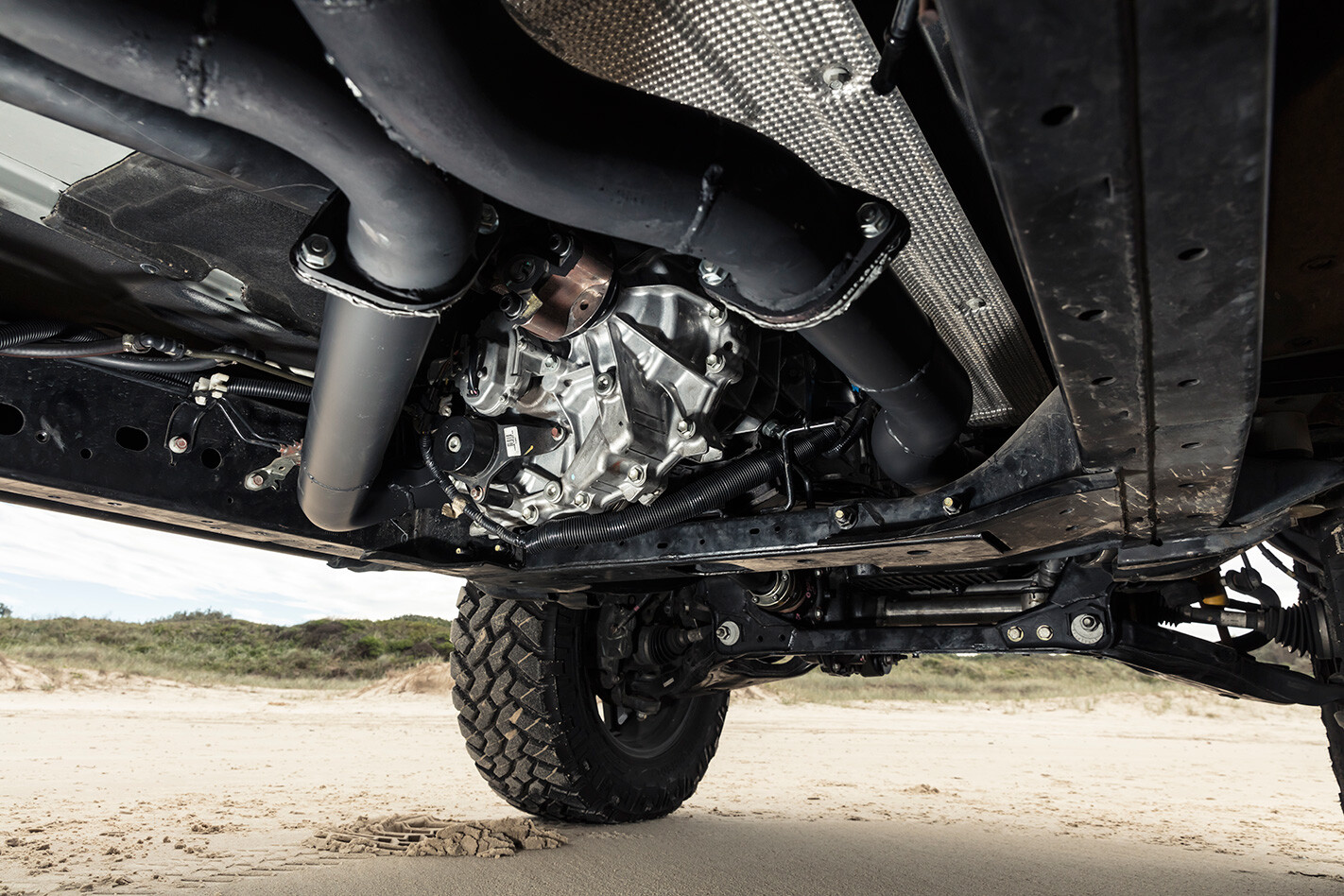 “We struggled to find someone who would do it. We knew a few machinists who were sort of capable of doing it. They had the equipment and the expertise to do it, but no-one wanted the responsibility of doing something like that; to rely on their machining to put such a gearbox behind such a big engine. We eventually came across a company in Nerang, Queensland – Rage Engineering – and they had to do it.”

This task took a couple of months. The engineer had to map out then digitise the gearbox, before machining a back housing to fit the Ranger’s output shaft into the Falcon gearbox. This big job was due to the fact that, although the Ranger and Falcon gearboxes are similar – and, indeed, look virtually the same – they’re not.

This meant the rear housings didn’t line up, which then meant the engineer had to ‘fill in’ the original mount holes, weld a new ‘base’ around it, and then drill new mount holes. The engineering work had to be perfect, and the aim was to ensure there were no vibrations or anything that could cause damage to the drivetrain. The owner and Gary are both happy with the result.

“He’s done a fantastic job. You get in and drive it and it feels like it is right out of the factory,” Gary reckoned.

THE engine and gearbox mods weren’t the end of working with confined spaces – the exhaust is also a work of art. The custom-made headers took a fortnight to make; the two-piece manifolds had to wrap around the steering shaft that runs between them, before then bending up and over the front driveshaft and around the side of the gearbox.

This job was also farmed out to a local company with favourable results. It was this fine-tolerance work that defined this whole project, with all work focused on matching transplanted parts with standard fitments.

“There was nothing that fit. Nothing,” Gary said. “Nothing lined up with anything, everything had to be modified. Because he [the owner] wanted everything to be factory, we couldn’t fit aftermarket bits that looked obviously aftermarket. We basically used everything we could off the Falcon and adapted it to the Ranger.” 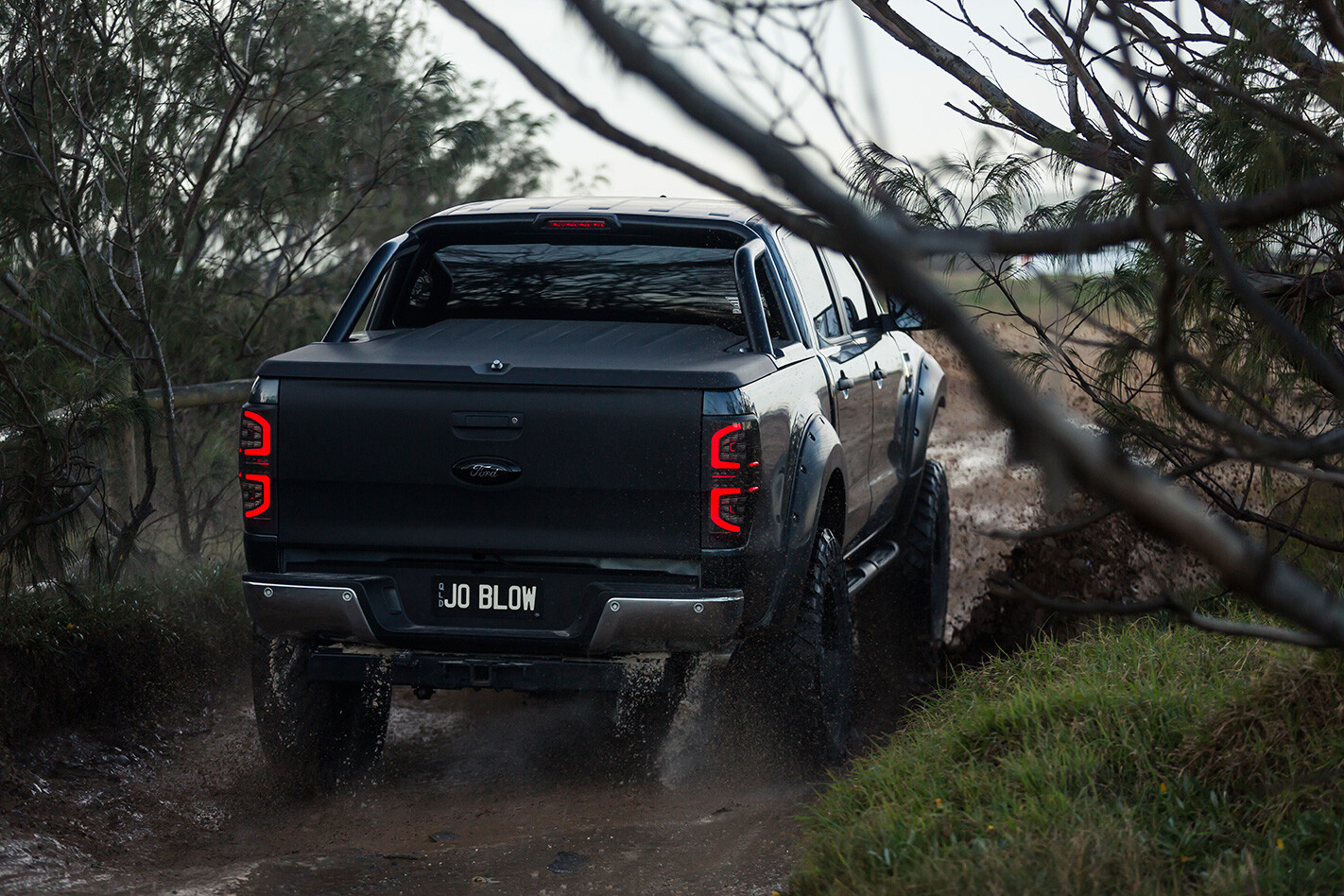 Some of these mods included cutting and reshaping the Falcon air box so it would fit in the Ranger’s engine bay. This air box was moved to the opposite side to the standard Ranger one, which then necessitated swapping the battery and power steering reservoir to the opposite side.

“If it wasn’t such a cool ute, yeah, I would say it was a nightmare of a job, but I just love it to death,” Gary added.

One Ranger item that stayed was the radiator, owing to it being a larger size than the Falcon version and the fact it mounts on the opposite side, which gave the engineers more room to work with. However, this still copped some mods to fit.

With no room for a fan, Gary fitted the Falcon’s thermo-fans at an angle to the radiator (they’re actually wider than the Ranger radiator) and then cut and reshaped the Ranger’s radiator shroud to fit over the top – again, for that factory look.

WHEN we asked Gary how much time it has taken to get the Ranger to its impressive final appearance, he laughed ruefully.

“I’m sort of the only guy who worked on it. There were a couple of guys that did a few hours on it, but I think the boss said something like 300 man-hours or something like that over about six months or so, not including all the stuff we outsourced.”

What about the owner? Well, he’s had to be patient. Initially, Gary estimated the project was going to take around a couple of months at most.

“It’s been here for almost a year, and the owner’s been really good. You know, he gets a bit uptight every now and then, but through the process we’ll get him in to have a look at it, show him what we’ve done, and, yeah, once he’s heard it start up, he’s got a smile on his face,” Gary added. “When it got dyno’d out at Real Dyno he drove it back from there and he just loves it.” 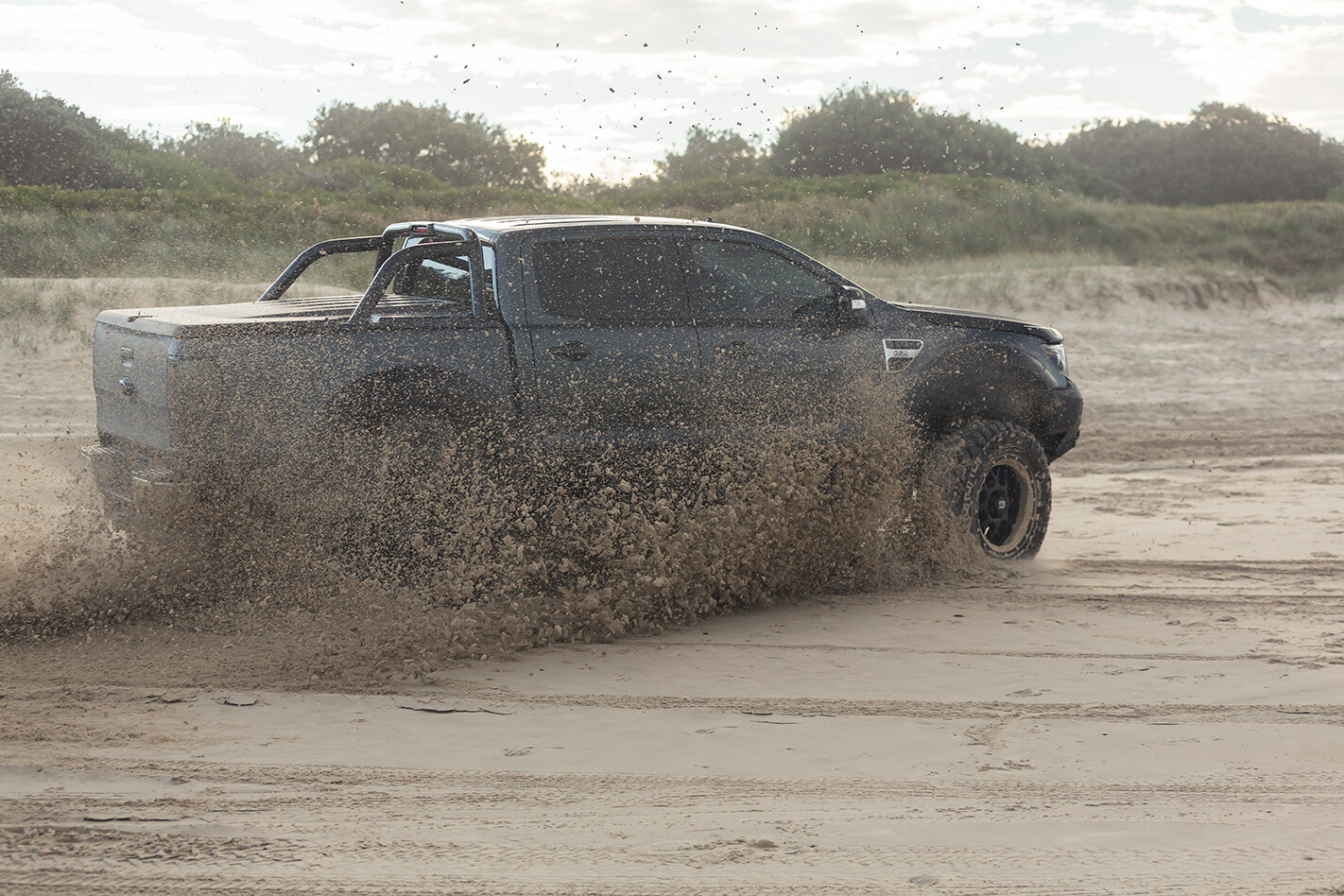 The Ranger’s sweet-sounding V8 punches out 344kW according to a dyno sheet Gary has. Originally, the tuners had it producing even more power, but they backed it off in the interest of longevity and the fact it has to push around larger-than-standard tyres and more weight.

The Diesel Leaders team usually take on the challenge of one or two of these projects each year to break up the monotony of their regular truck fleet maintenance and heavy-diesel repairs, and to keep the crew sharp.

This power-packed Ranger has left Gary particularly proud of the end result. “I am stoked, mate. The owner, he just wants to remain anonymous, and he owns it. But that ute is mine. I built it, that’s my ute,” he laughed. “He can take it away when we’re done with it, but I love it.”

Looking at the end result of all that hard work, it’s easy to understand why.

DESPITE how seriously impressive it is, this monstrous rig isn’t just about its V8 transplant. The Ranger also has some sweet off-road mods, proving it’s far from an on-road show pony.

The lifted suspension is a mix of heavy duty springs and well-proven Bilstein dampers, with underbody protection taken care of via the fitment of a massive Rhino 4x4 aluminium bash plate. Additional body protection is afforded via a set of rock slider/side steps.

The rolling stock (just) covered by the aftermarket wheel-arch flares is a combo of chunky 35x12.50R20LT Nitto Grappler M/T tyres, wrapped around a set of KMC Wheels’ satin black XD820 Grenade rims. And, as with everything on this build, even though this wheel/tyre combo is far larger and wider than the stock wheels, the matching colour scheme and the flare set makes them look like standard kit. 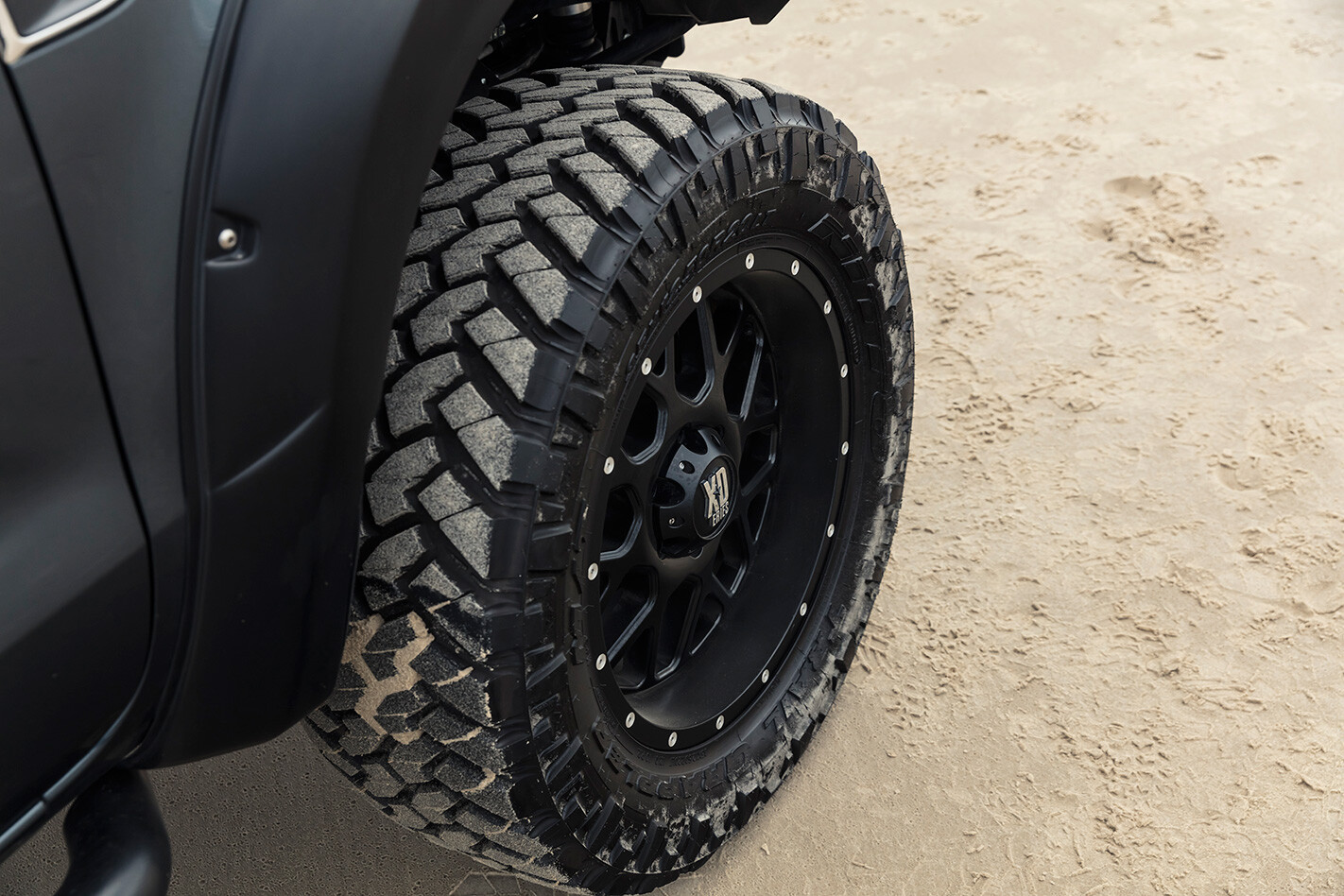 Continuing the chase for the factory look, the Rhino 4x4 Evolution 3D front winch bar looks like standard fitment as well. A mix of 3mm and 5mm steel construction ensures plenty of front-end protection, and it’s topped by a driving light bar that sits below the grille.

The bar fitment improves the approach angle, and two rated recovery points finish off the front end (the aluminium bash plate comes as part of the Evolution bar kit). And what modified Ranger wouldn’t have a tweaked F-150 Raptor ‘FORD’ grille to signify it’s a little bit different.