AUDI has launched the second-generation drop-top A5 cabriolet in Australia. The fourth member of the German luxury car maker’s growing drop-top line-up – the Audi A5 joins an open-air club that already counts the A3, TT, and R8 among its line-up – has also been released as a more potent S-badged version, the S5 Cabriolet.

The Audi S5 Cabriolet is the top of the folding roof A5 family, well, that is until a potential RS5-badged model arrives late in the current A5’s life cycle. 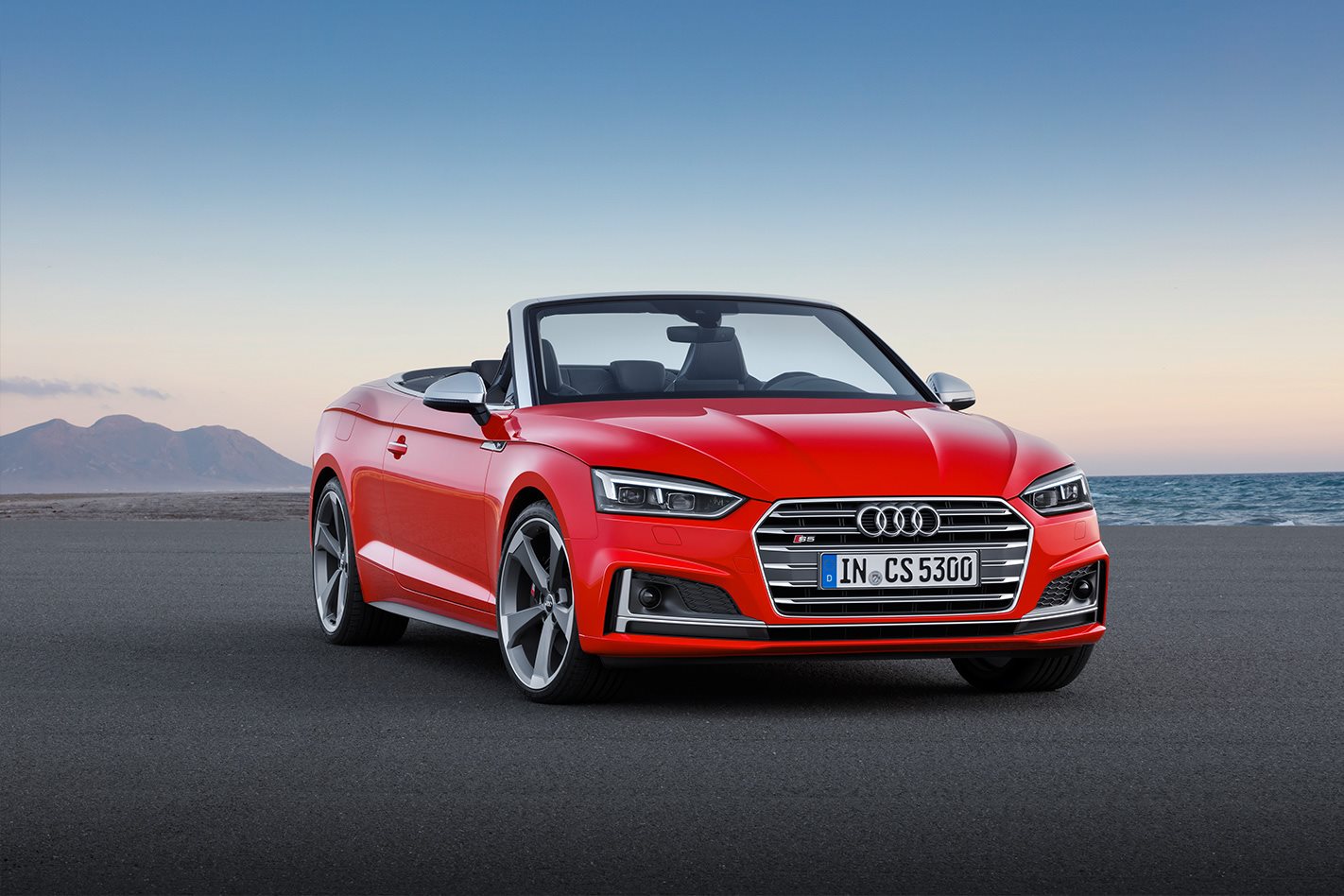 The new A5 cabrio range swaps over to the same MLB platform as the A4 and hard-topped A5 range. Although the S-badged model sticks to a 3.0-litre V6 under the bonnet, the supercharger of the previous generation is swapped out for a turbo in this one. We’re keen to know if its change of forced induction alters the character.

Something has been lost in translation in the S5 Cabriolet’s move from a supercharged V6 to a turbocharged one. As good as the turbo version is, it lacks some of the responsiveness – and the acoustics – of the generation it replaces. Save your money, buy the 2.0 TFSI Quattro, enjoy the first sting of summer and then trade it in on an RS5 coupe, which arrives here just in time for Christmas. 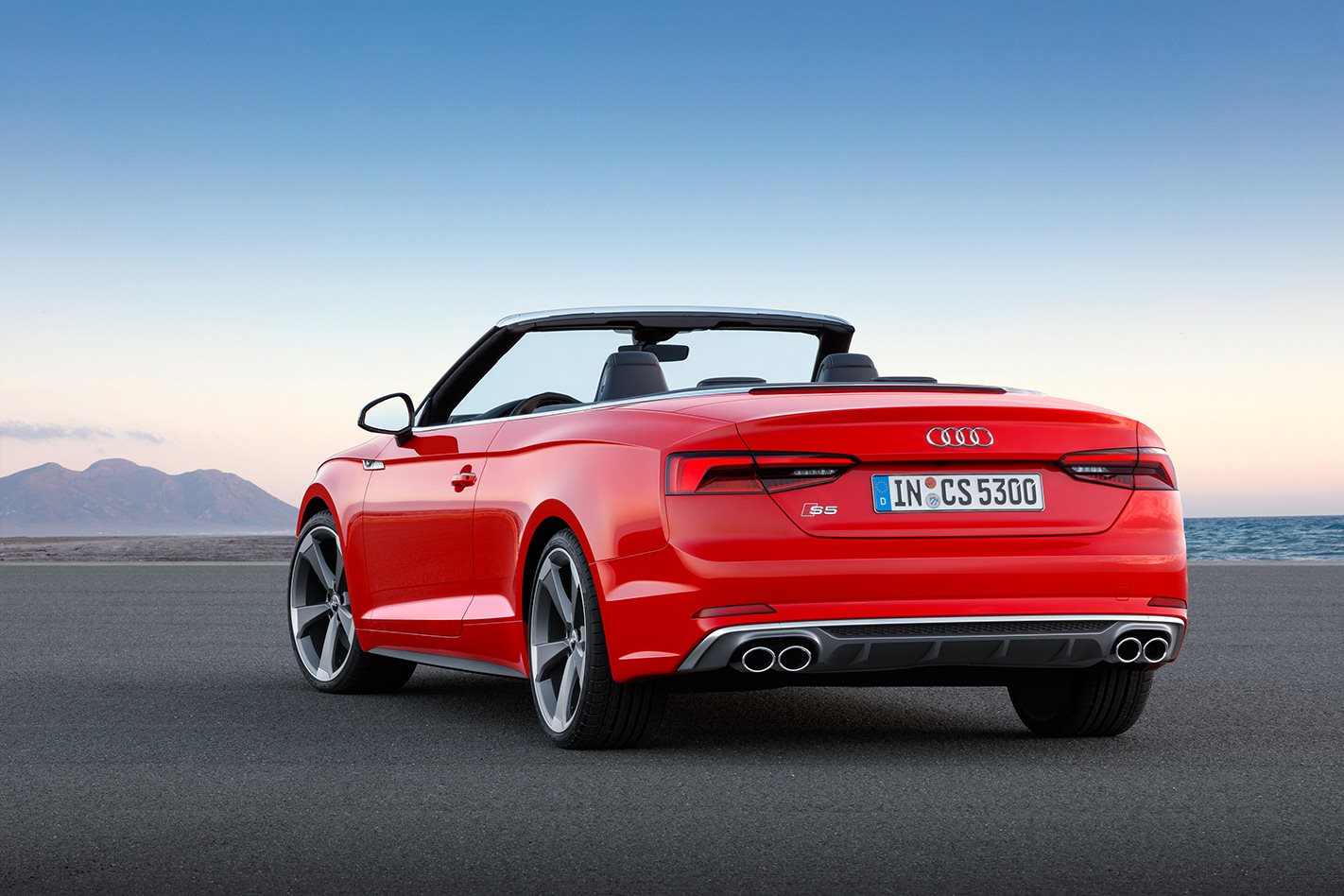 AUDI is celebrating the arrival of its A5 Cabriolet with the S5 version, a sharply packaged, sharper-priced, and even sharper-driving version of the drop top.

Looking much like the S5 Coupe – apart from a five-layer folding cloth roof that contains more sound deadening, a larger rear porthole, and in-built reading lights for the rear pair of pews than its predecessor’s – it carries an almost $15,000 premium over the hard-topped version it shares its 260kW 3.0-litre turbocharged V6 with, but is $13,000 cheaper than the outgoing model. 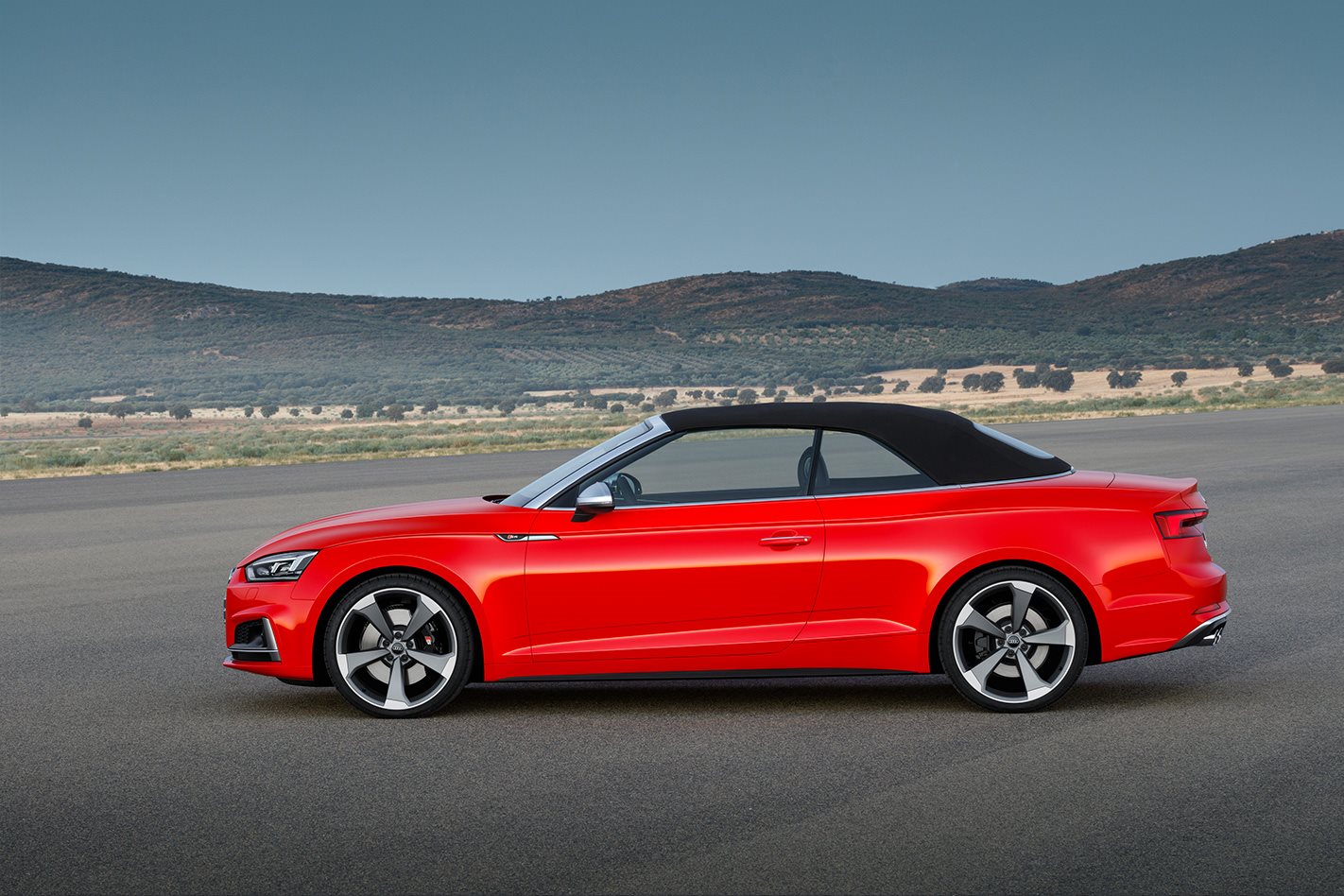 Equipment levels are almost the same, but there’s one big advantage going for the rag-topped S5; it gets the trick Audi sport electronic diff that sends drive to the rearmost wheel with the highest level of grip as standard, and not part of the options list. And, in perhaps what is a sign of its intended purpose, the S5 Cabriolet adds Audi’s Assistance package, comprising a number of active driver aids by default.

We didn’t drive the S5 with the roof down – at the time of our drive Adelaide appeared to be enjoying a month’s worth of rain compressed into a single day – but there was opportunity to get just a hint of its capabilities over choppy, poorly surfaced roads around the Adelaide hills that this boulevard cruiser wouldn't ordinarily experience. 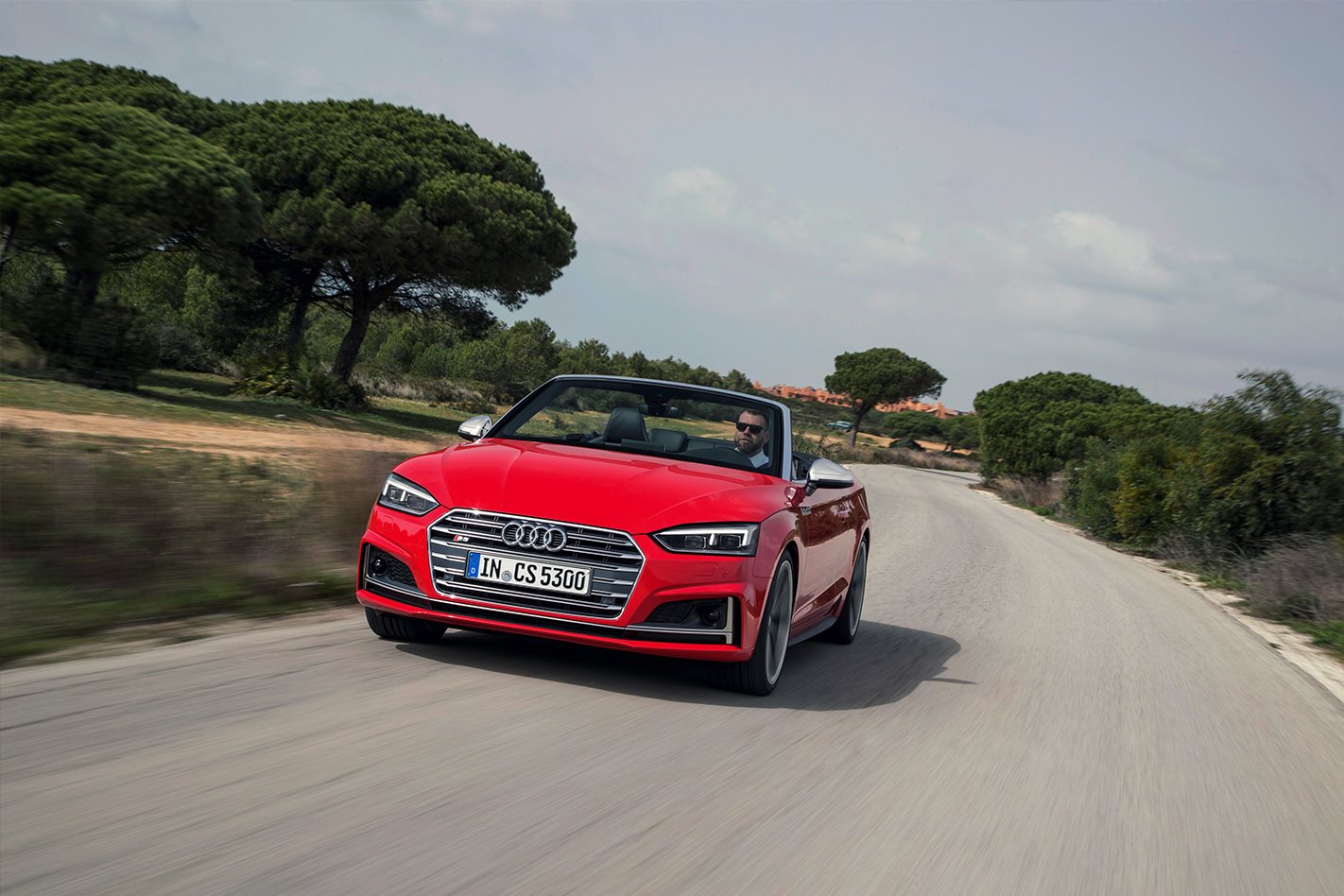 The S5 cabrio’s default ride mode is best described as firm in a car that weighs 200kg more than the entry-level 2.0 TFSI. The car sits on 19-inch alloys clad in low-profile Hankook rubber, which provided plenty of grip even as the downpour of Biblical proportions turned the road into a river.

Even so, the quattro system – sending a default 40:60 drive split, but adjusts that to anywhere between 85 percent for the front or 75 to the rear – felt well planted and didn’t seem to have trouble laying down the engine’s power. Body flex – the result of chopping the rigid roof off – was well contained. 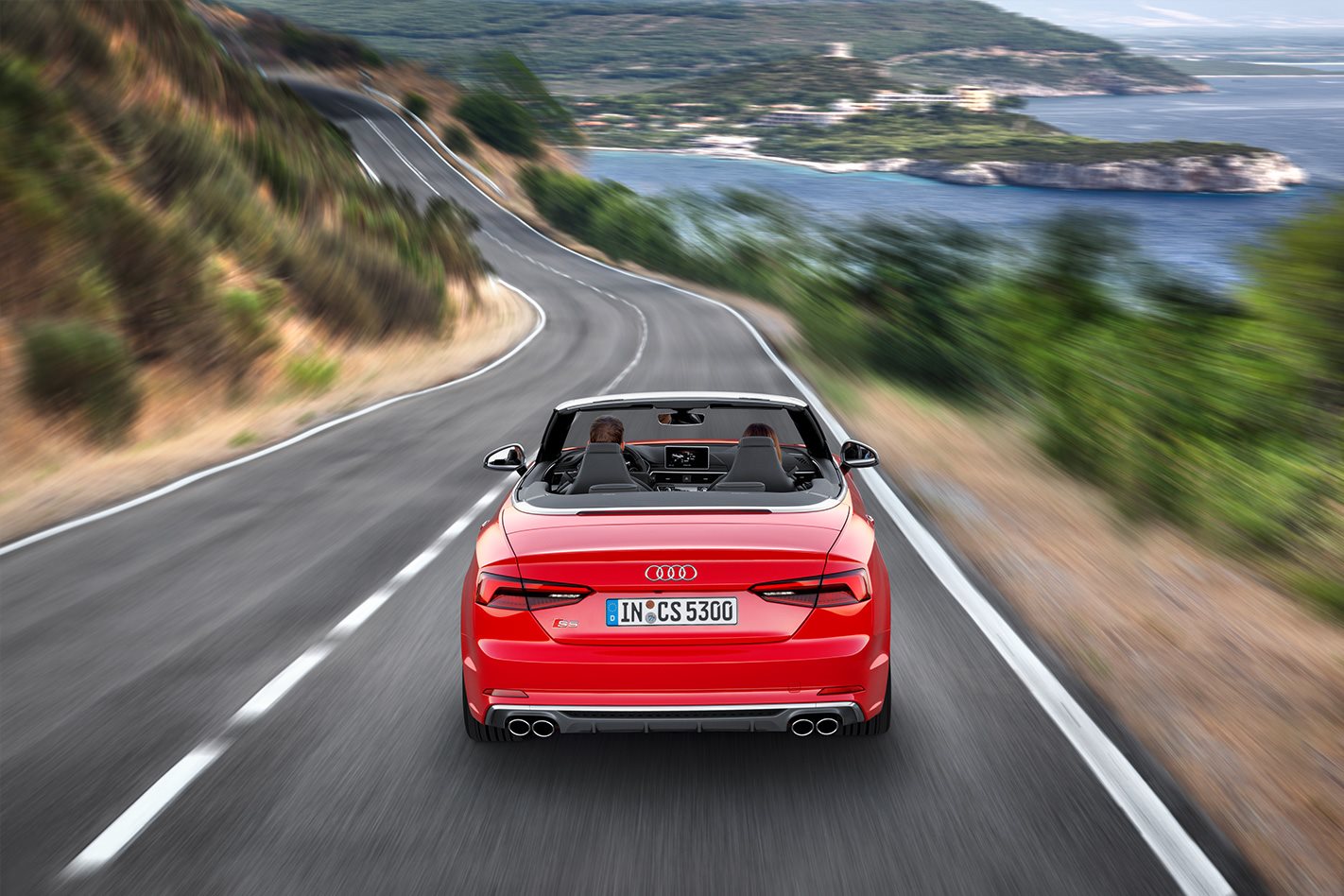 Oh, and that engine. The previous one was supercharged, with a generous application of throttle producing a low whine that build in volume as the revs rose, eventually becoming a howl as the top end kicked in. The more you stuck into it, the better the old unit’s 245kW/440Nm felt, even if the bits that were tacked on behind it flopped around like a rag doll in a dog’s mouth.

In contrast, the “hot” turbocharger that sits in between the vee runs out of puff early, barely making its way into the cabin – probably due to thicker glass used in the cabriolet that provides more sound insulation. The only bit of entertainment is the slight crack and burble on a trailing throttle when the performance setting is on Sport. 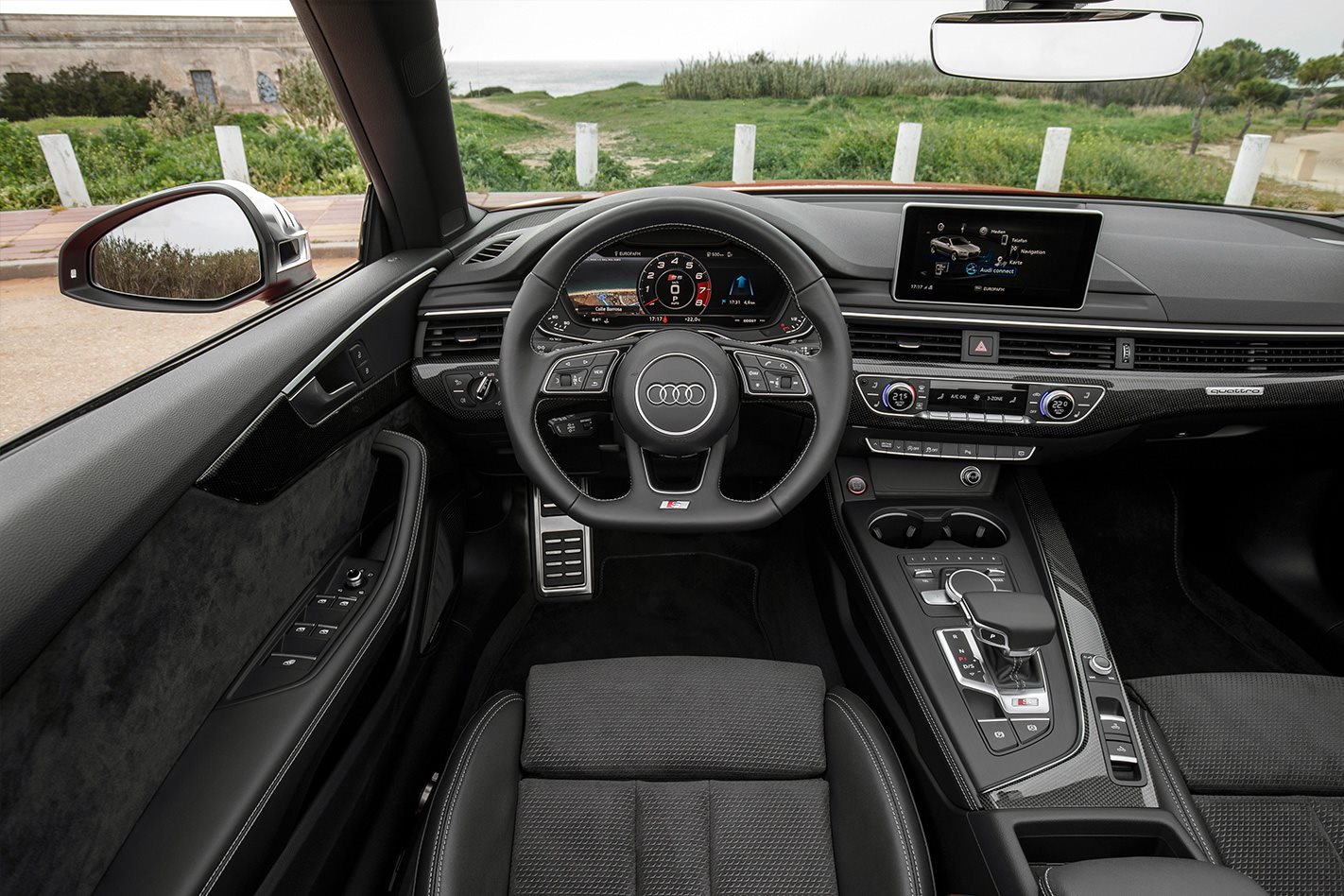 The torque converter eight-speeder, meanwhile, replaces what was a rapid-fire seven-speed dual-clutch unit. Having eight gears to choose from in a quasi-performance car leaves you thinking you’re in a chase scene from a Fast and Furious sequel, where 18-speed gearboxes appear to be the norm. In reality, you’re lucky to snatch fifth if you drive the S5 Cabriolet like the sports car that it pretends to be.

And that, in a nutshell, is it. The S5 cabriolet comes across as a pretender, and not really a genuine warmed-over sports car that Audi’s “S” moniker and its silver-framed wing mirrors normally point towards. But cabrio buyers are a funny, loyal lot, and some will see the upside of all that potency wrapped inside a pretty box.